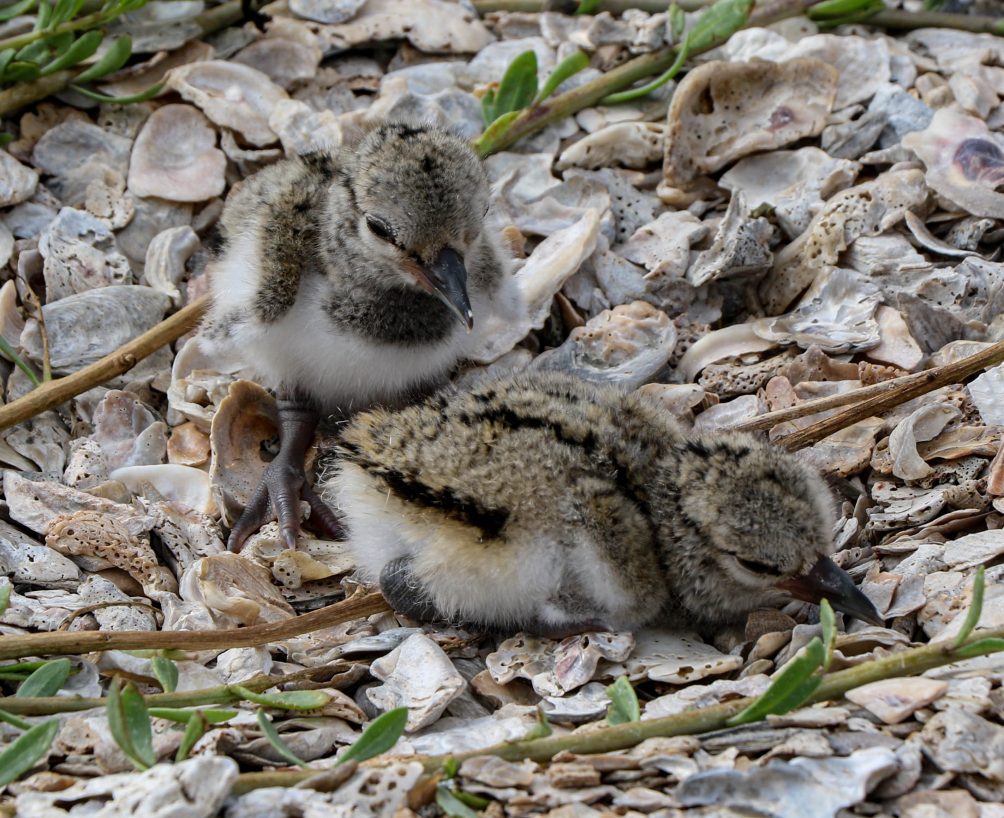 Well the news is good so just relax and read on. We weren’t able to go out last week because of the weather and everything associated with the weather. I was worried about the birds though so on Friday (19th) I emailed Kevin Somers who lives along the Galveston Island shoreline and asked him whether the pair he can see from his house was still incubating. He replied right away and said that the nest had hatched and he had seen two chicks that morning! Yay! I was very much relieved. He also said though he couldn’t see very well farther down the island, it appeared the other pair was still incubating. All good stuff!

We had to wait until Friday to go out this week and then it was foggy so we had to wait a bit even when Friday came! Finally, a little after 9:00am, Alan, Taylor, Sarah and I headed out from the Tiki Island boat ramp. We didn’t find any oystercatchers in Jones Bay so we went to check on FR & unbanded. It was time for their nest to hatch so I wasn’t sure what we would find. FR is usually very focused on our approach but this time we didn’t see him or his mate. Odd. When we checked the nest, we found two chicks! 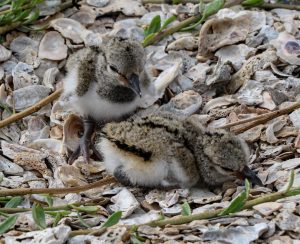 The eggs shells were still near the nest scrape but both chicks were dry so they must have been out of the shells for a while. We snapped a couple photos and got the heck out of there. The adults were split up, one at each end of the island gathering food I guess. We left them to their business.

We found W5 & JC hanging out on a reef and we didn’t find JJ & JC or YM & JH at all. I wonder if JJ is going to leave now that his namesake got traded. Hope not! Next up was J6 & UF. We went to the backside of Marker 52 where we found their nest last time and once again we found UF on a reef by herself. I needed to check their nest to see if UF had laid another egg bringing their clutch completion with three eggs. As we approached we discovered the pelicans have arrived. 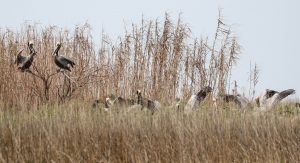 They haven’t started nesting yet but they will soon and that puts the oystercatcher nest at risk. It should hatch in about a week and a half so they don’t need much more time. J6 was hunkered down in the vegetation and didn’t fly until I got pretty close. Three eggs! I got out of there quickly so he could go back and neglected to take another photo. Dang. The pelicans are all around him but not too close so hopefully it will go ok. Once the nest hatches, they can keep the chicks hidden in the spartina. We know they know how to do that because they raised two chicks here last year!

We moved onto C1A & unbanded and E6A & unbanded. C1A & unbanded were out on the reefs but either E6A or his mate was incubating. They also only had two eggs last time so Sarah and I walked over to see if they had laid another. They did! This time I remembered to take a new photo. Compare the photos below from when the nest was found to now. It got cold out there and the freeze killed all the vegetation! 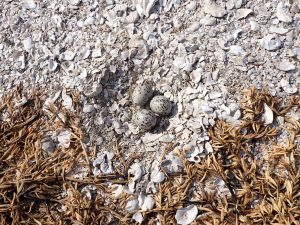 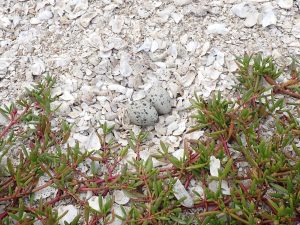 Still the oystercatchers incubated the nest the entire time! These birds are so tough! I can’t imagine sitting on eggs in temperatures in the 20s. The fog had completely cleared so we headed up to Swan Lake. We didn’t find anything interesting until we went to check on K7 & unbanded. I saw one of them (turned out to be K7) fly out from the area where I figured they would nest so we checked it out. One egg! 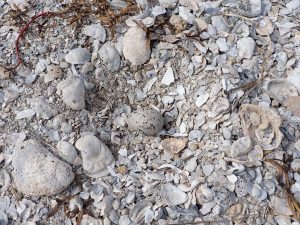 None of the other pairs in that area had anything going on so we headed back to West Galveston Bay and went to Struve Luci, the island that Kevin can see from his house. The first thing we noticed was one of HM & X7 fly off the rock wall where they nested last year. Ok! As we motored over there, the woman that lives in the house there came out on her balcony. She watches over this pair and I have chatted with her before. She told us the nest was next to a piece of wood on top of the rocks. I pulled the boat up as close as I could and we stood on the bow to look. Taylor spotted the eggs (3) right away and Alan was able to get a photo. We don’t go on the rock wall because we don’t want to take a chance of leaving a scent trail to the nest since the rock wall is connected to Galveston Island and predators can easily access this area. 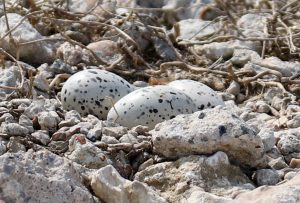 12 & unbanded were not giving anything away and we didn’t see their chicks but I’m sure they were hiding in the vegetation. We will just have to be patient and wait to see them when they get a little bigger. It was time for LT & JA’s nest to hatch and when I went up to check on it, there was only one egg left. The other two must have hatched! We looked around a little bit but didn’t find any chicks. That’s not unusual. They hide them well. We’ll have to wait to see them too! L9 & unbanded and the unbanded pair still don’t have a nest so we headed to Jigsaw.

We didn’t see any oystercatchers at first. Then I spotted one pair on the tip end of a reef but by the time we got over there, they had flown back to where we started! We motored over there to see who they were and suddenly the other pair appeared on a reef there too. I don’t know how they manage to appear from thin air. Neither had a nest so we headed over to the shoreline of Galveston Island. We found JX & YK on a reef. They weren’t too happy when we woke them up so we could see their bands. 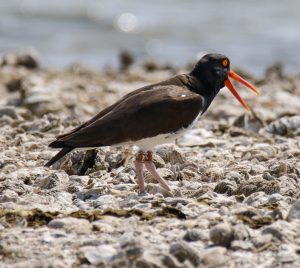 16 & unbanded were on the extension of 8 Mile Road that goes out into the bay. I wonder if they will try to nest there now that the area is closed off to human access.  It wouldn’t be a good choice because I’m sure the area if rife with predators but the choice is theirs!

On South Deer we found that F1A & E2A had a three egg nest and so did A5A & unbanded. Yay! Alan managed to get a photo of A5A’s mate on the nest before it walked off in response to our approach. 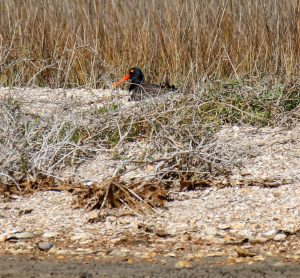 We found a gang of 12 birds on the Sportsman Road docks but they flew to Confederate Reef when we tried to photo the banded ones. We motored over there and they promptly flew back to the docks! This time they stayed put a little better and Alan was able to get photos of most of them. It appeared to be mostly the same gang we found on Confederate Reef on our last survey.

We headed across the bay to see if the Brown Boobies were still there. My colleague David Newstead, who works for the Coastal Bend Bays and Estuaries Program found six dead ones down south while looking for cold stunned turtles so I was a bit worried about our birds. We checked all four channel markers and found none. I don’t think we’ve missed seeing at least one on every survey in the last 18 months so this is not good. Hopefully the cold just pushed them out to sea rather than the alternative. Maybe they’ll come back!

F9A & unbanded were not on their island at Greens Cut so we headed back to the boat ramp. I am so happy all the nests made it through the freeze! Go oystercatchers!