On Thursday I was joined by Alan Wilde and John Wright, awesome volunteers from Tiki Island, to survey West Galveston Bay and the Galveston shoreline up to Swan Lake by Texas City. The weather was beautiful for a change! There wasn’t much wind, the skies were blue, and the water was unusually clear. It was a little chilly for my taste but I’m not complaining! We headed out the Tiki Channel intending to go up to Swan Lake but we spotted a pair of birds on a small island right along the channel. It was C2A & E0A the pair that belongs up at Virginia Point. They did try to nest on this island one year though and this is where we caught them. I sure hope they don’t try it again. It will not go well!

We headed under the railroad bridge (up for a change!) and checked C2A & E0A’s other home just in case another pair had run them off or something. Instead we found this. 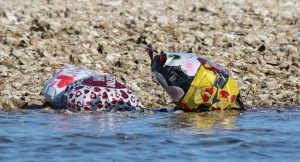 Please, please, please don’t release balloons! They have to come down somewhere and the strings are very dangerous for birds (they get entangled) and the balloons themselves look like food to turtles that eat jellyfish. Plus, you’re littering! Just don’t do it. PLEASE! Pass it on!

The other two pairs up there 39 & unbanded and X3 & unbanded did not have nests but X3 & unbanded decided they needed to exert a little dominance over our intrusion and started displaying. Here’s X3 striking a cocked tail pose. 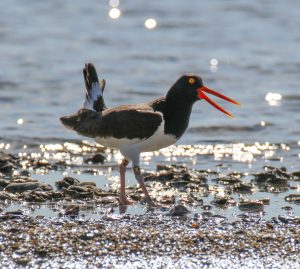 We headed back down to West Galveston Bay over smooth waters and amazingly the railroad bridge was still up. Figures. It’s only down when we are bobbing around like a cork in two foot waves. Things were rather bland on Struve Luci. 12 & unbanded and LT & JA weren’t giving us any looks at their chicks. We caught X7 slinking away on the island. 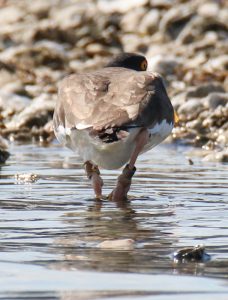 That was a bit odd because X7’s nest is not on the island but on a rock wall that extends out from Galveston Island. We checked and there were still three eggs so I guess she was just trying to decoy us away. My excellent spy that lives there, Kevin Somers, had told me that the unbanded pair looked like they had a nest so I went up and found two eggs. Yay! 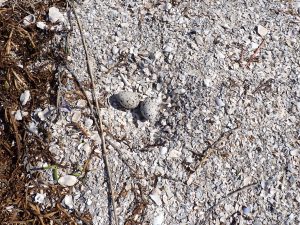 We tried to trap them with the nest box but they were having none of that. Smart birds. L9 & unbanded still only had scrapes but they were acting very suspicious with one of them trying to hide behind a shell berm. I suspect they will have eggs soon.

We moved on to Jigsaw where we found both pairs sleeping in the sun. Um, what’s up guys? It’s nesting season remember? Time to lay some eggs, do some incubating, get mad at us for spying on your chicks. You know. Come on. You love that game! They seemed uninterested. Maybe next week.

Along the Galveston shoreline we discovered that JX & YK have some scrapes in an area where 16 & unbanded tried to nest a few years ago. There are too many predators in this area for them to succeed but we’ll see how it goes. JX wasn’t buying any of what I tried to tell him about nesting there. 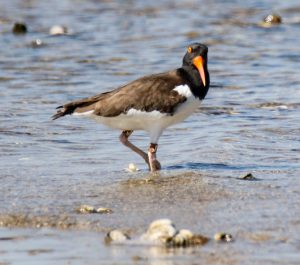 Speaking of 16 & unbanded, we found them basking in the sun on the first dock along Sportsman Road. I have no idea where (or if) they will try to nest again. After so many failures along the Galveston Island shoreline and then having their chicks predated by something (I suspect caracara) on South Deer, they may just have given up. I hope not.

On South Deer both pairs (F1A & E2A and A5A & unbanded) were incubating. Since they both had three eggs last week, we didn’t bother them. The usual gang of youngsters was on the Sportsman Road docks but this time the flock included E7. I banded E7 on April 15, 2011 as a breeding adult so she is at least 13 years old and probably older. Wow! There are a few others left from that year as well (P4, T6, J6). E7 bred on Jigsaw island from 2011 (when we started) through 2016. After that she disappeared from all the breeding areas. We see her occasionally on a reef or the docks but not with a mate on a nesting territory. That is odd.

We headed across the bay and did not see any Brown Boobies though a birder friend of mine reported seeing three while he was out fishing so maybe they are still around.

F1A & unbanded were not home at Greens Cut so we headed up the GIWW towards North Deer. We found W1W & unbanded on a reef very close to where we saw them a few weeks ago. They must be a pair but I don’t know where they would try to breed. On North Deer we found YM & JH lounging away on a small island in their little bay. I guess they haven’t gotten the memo either. Ditto C1A & unbanded who were still hanging out on the reefs even though the Great Blue Herons that were hanging out in their territory have moved on. What gives? Good news with E6A & unbanded though. I caught a glimpse of one of them sneaking off their nest so they must be going strong.

Next up was J6 & UF. Alan thought he saw one of them back on the island where they used to nest but when we got over there no one was home. We proceeded over to Marker 52 where their nest is this year and we didn’t see one of them on the reefs like we have the past two weeks. Also the pelicans have expanded over the entire area where the nest is so I was worried it hadn’t made it. The pelicans don’t have eggs yet so I went and took a quick peek and found the oystercatcher nest still with three eggs. The poor oystercatcher was hunkered down amongst the pelicans trying to keep a low profile. The nest should hatch in a week and half. Sure hope it makes it!

Around the other side of Marker 52 we found JJ & P4 basking the sunshine. I thought maybe JJ would have flown the coop since his namesake got traded to Arizona but he showed no signs of distress! We continued down the island and found JC either guarding or incubating a single egg. There was no sign of W5 so he must have been out on a reef feeding somewhere. The pelicans haven’t moved into this area yet but I bet they will soon. Maybe they can make this nest work though.

FR & unb were not giving any of their secrets away and we didn’t see any chicks but they flew out and circled the boat calling when they discovered our presence. Crazy Fred is back. Woohoo! In a few weeks the chicks should be big enough to be out on the open. Can’t wait for that! CA & Y2 were guarding a one egg nest so they are finally getting with the program. There aren’t any other birds on their small island yet which is good. No disturbance means happy oystercatchers.

Last up was an unbanded pair on the small island in Jones Bay that used to be P3’s. I still miss you bud! Since it was still early in the day, we decided to set up the noose carpets and see if we could catch one of them. There was lots of loose shell so it was easy to set up the carpets. The oystercatchers stood on the end of the island giving us the evil eye the entire time but when I started playing the recording of the oystercatcher call, they got excited really quickly! We barely had time to get off the island before they were dancing all around the decoys.

It didn’t take long for one to get caught so we raced back and grabbed it. I believe it was the female but the measurements weren’t definitive. John and Alan are going to learn to band so they can band birds rescued from fishing line entanglements which will free me up to not have to be there for every one of them. Sad that there are so many! John banded this bird and did a fine job! She is now E1A. 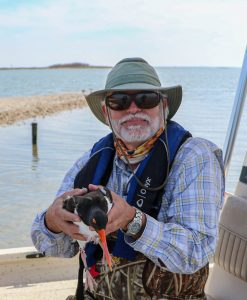 It was a great way to end a beautiful day on the bay. I bet we will pay for the nice weather in spades through the season!