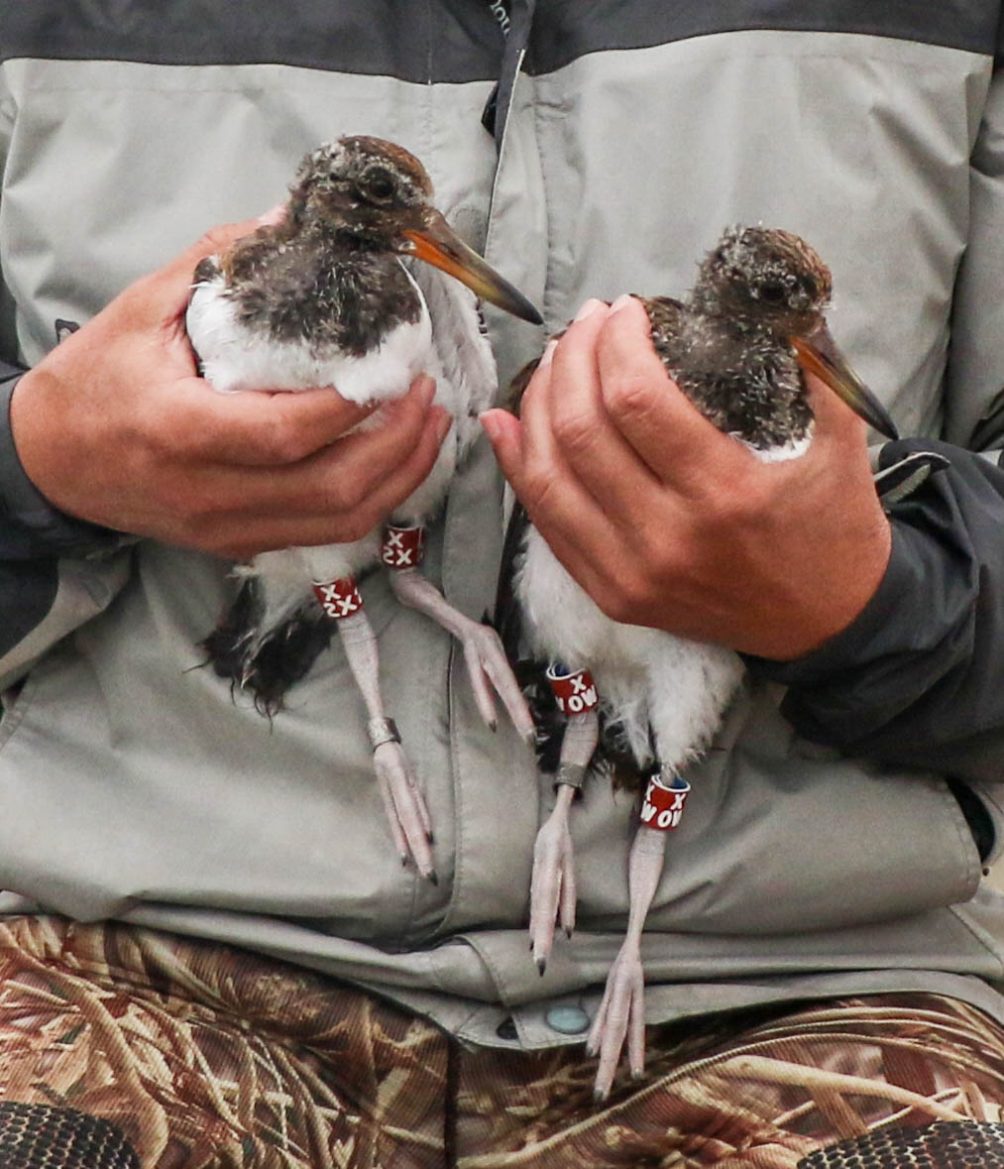 The weather people are just not my friends this year! We had planned to go to West Galveston Bay on Thursday but the forecast looked awful with rain and wind so we switched to Wednesday and what did we get? Rain and wind! Ugh. Alan, Taylor, Sarah and I set out to see what we could get done in a stiff east wind. John Wright joined us for the first part of the journey so he could get some more practice banding birds. We headed to Struve Luci to band 12 & unbanded’s chicks! I wanted to check everyone else on the island first before we upset the apple cart by chasing down the chicks so we started at the opposite end of the island from 12 & unbanded’s territory. The first thing we noticed was that some of the skimmers have returned! Yay! There were 40 or so of them on the nearby reefs. They won’t get down to business for another couple of weeks though.

L9 & unbanded were incubating their nest and Alan caught a brief glimpse of one of LT & JA’s chicks before it ran into the spartina to hide. I’m sure the other one was there somewhere. The unbanded pair was also still incubating.

That one should be hatched next week. Excitement! HM was on the island but when he saw us coming he flew out and circled the boat and then joined his mate (X7) on the end of the rock wall where their chicks are hidden. They both walked up the rock wall towards the mainland and we didn’t see any chicks but I’m sure they were hidden in the rubble somewhere. We didn’t want to disturb them so we backed off and moved on to the most exciting thing of the day – banding 12 & unbanded’s chicks.

When catching chicks, I always try to approach the island at a spot where the chicks will have lots of room to run or a path to some vegetation to hide. That way they most often don’t end up in the water swimming to try to get away. In the case of 12 & unbanded’s chicks, they both ran up the island almost to where the unbanded pair’s nest is and then dove into the vegetation to hide so they were pretty easy to find. No running, no swimming, no panicking on my part! Just the way I like it. They were fine looking youngsters with just a few days to go before fledging. John got down the business and banded both of them. 12 & unbanded stood nearby giving us the evil eye the entire time but they’ve been through this many times before so they knew they’d get their chicks back unharmed. Say hello to X2X and X0W! 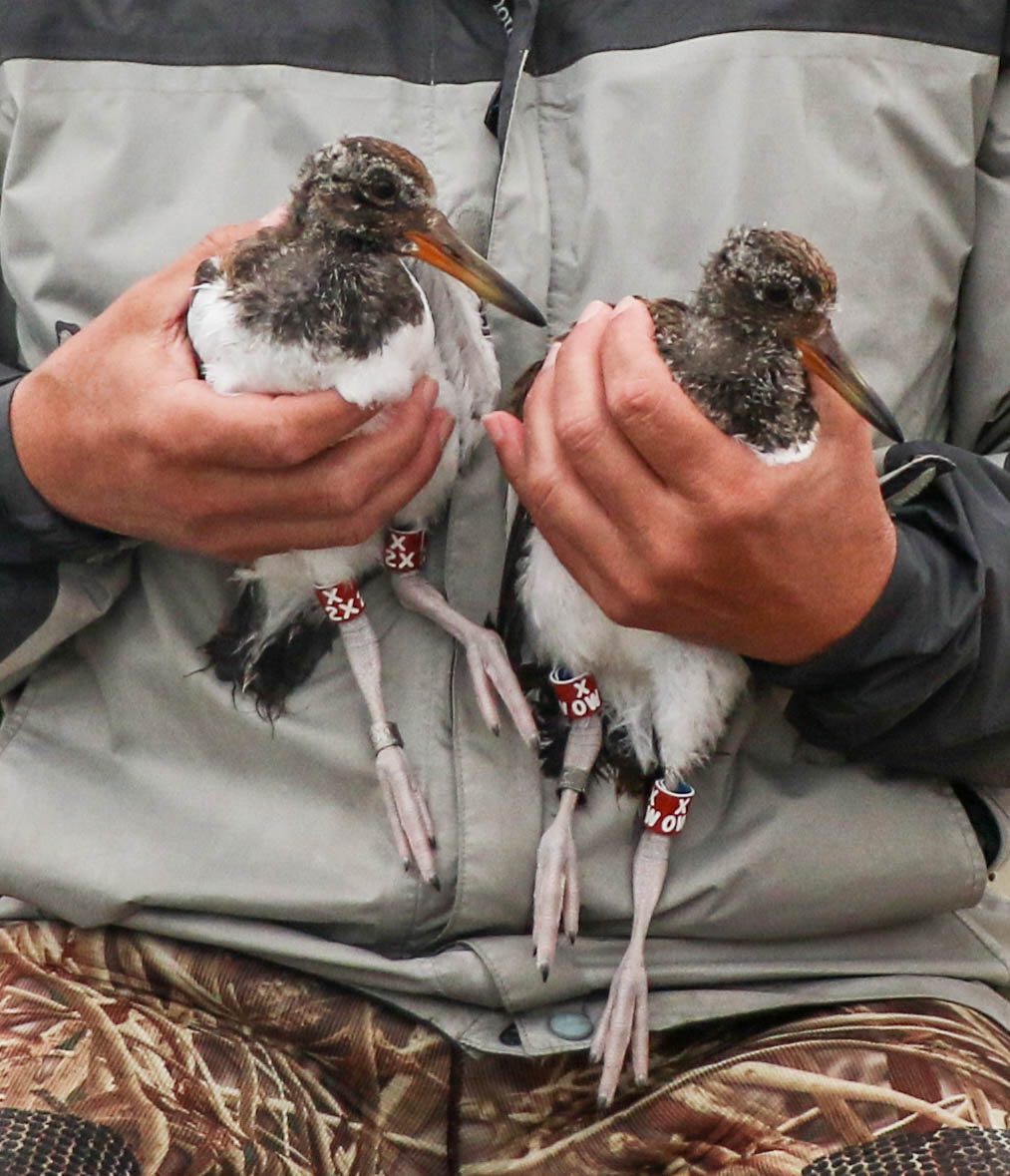 We let them go and they ran back to mom and pop no harm, no foul. Phew. I can’t wait to see them fly next week. That is always a joyous moment. With that stressful task out of the way, we motored back to the boat ramp and dropped John at his truck and then headed out to Jones Bay. We disturbed E1A & unbanded who were sleeping on their island. Lay some eggs you lazy birds! Time’s a wasting. It was misty and a bit foggy and the wind was whipping so perhaps that’s why FR & unbanded didn’t hear or see us coming. We got a quick glimpse of two chicks following one of the adults behind a shell berm! Yay! I was afraid they didn’t make it when Fred wasn’t up to his usual antics of escorting us around last week. Perhaps he has realized that is a waste of energy which is a good thing for him to realize but I gotta admit I kinda him escorting us everywhere. CA & Y2 were still incubating. That one should be hatched next week too. More excitement!

Just as we headed out towards the GIWW, it started raining. Not hard but any rain on a boat is a pain and can be dangerous when things get slippery. I hoped it would stop so we didn’t have to go in and indeed it did but the wind did not. The tide was up so we were able to go along the edge of Marker 52. We found an unbanded pair foraging in between FR & unbanded and W5 & JC territories. Wonder where they belong? Either W5 or JC was incubating their nest so we moved on. JJ & P4 were separated, one in the nesting territory and another on a small reefy island but we found no new nest. JJ is a handsome fellow though. 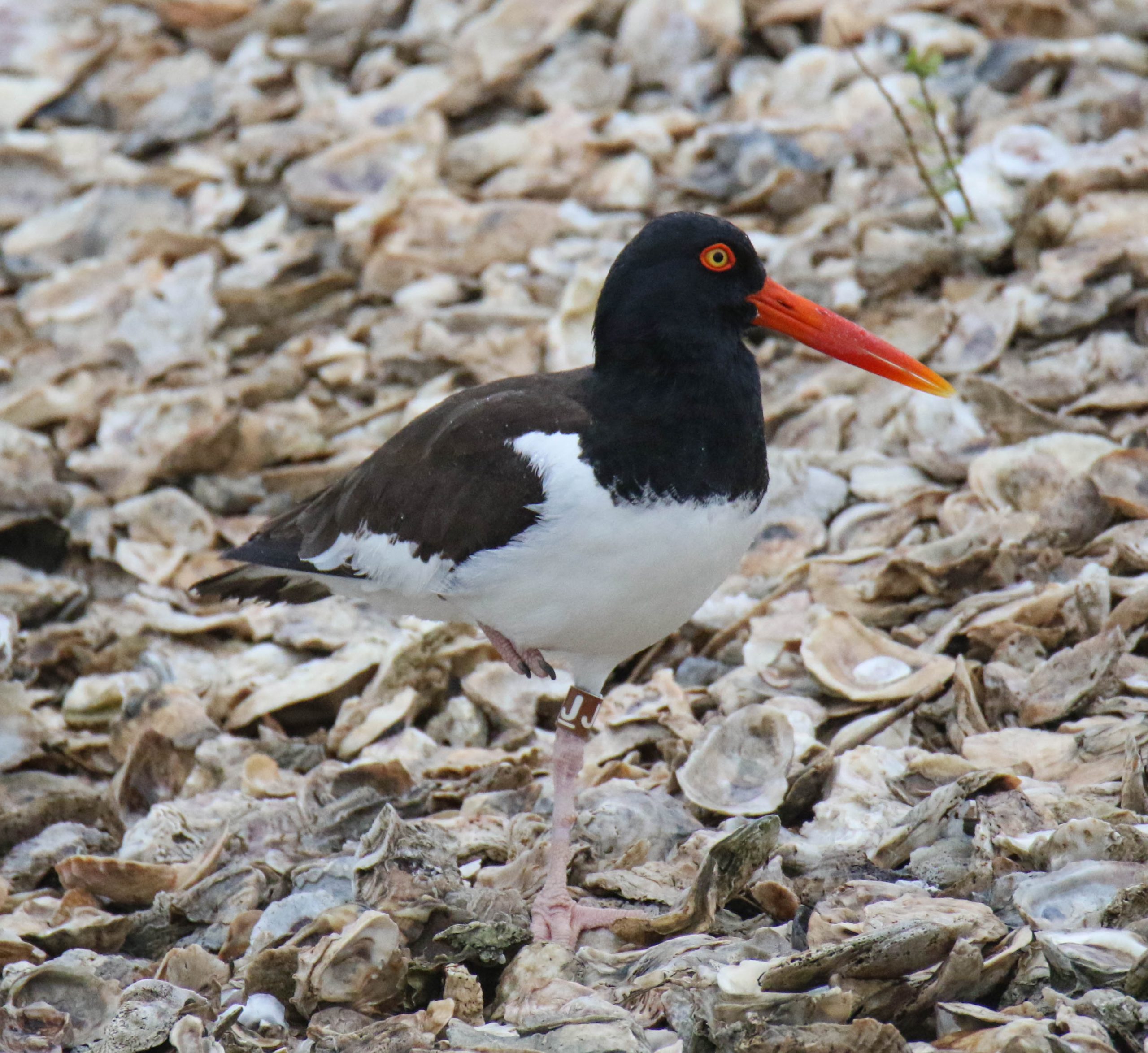 We moved over to North Deer and gave a brief look for YM & JH but they weren’t there again. They appear to have abandoned their territory. That’s quite a bummer but perhaps somebody new will move in. We motored along the breakwater and didn’t see J6 & UF. Uh oh. We went over to their small island thinking maybe they were over there but they weren’t so I went back and did another run along the breakwater. They both popped up from among the rocks. I guess they had been sleeping. Phew! That means they probably still have chicks. 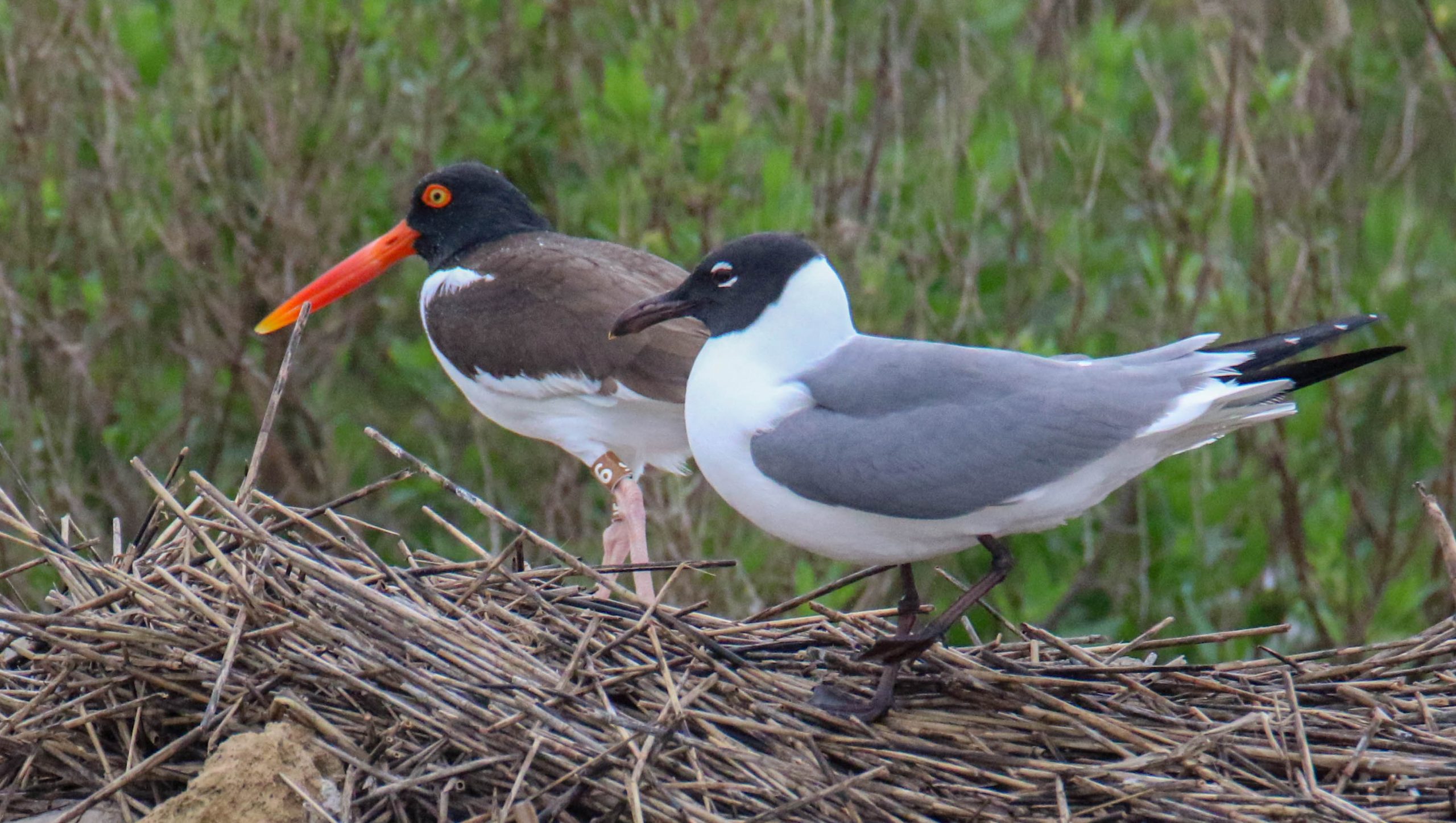 C1A & unbanded were incubating their nest so we left them alone. It was far to windy to try to get close enough to E6A & unbanded to see what they were up to and in fact we didn’t see them at all. I suspect they were just hiding out somewhere from the wind. I checked the weather on my phone and it said the wind was 18mph. Yikes! That is about the limit of what our little boat can take so I shifted into “get ‘er done” gear.

We took the back route snaking through the reefs to get to South Deer and found E2A out on the reefs and F1A up in the vegetation. And what does that mean? They still have chicks! Yay! Just in case we weren’t sure F1A was giving us a good evil eye. Or maybe that was meant for the Laughing Gull! 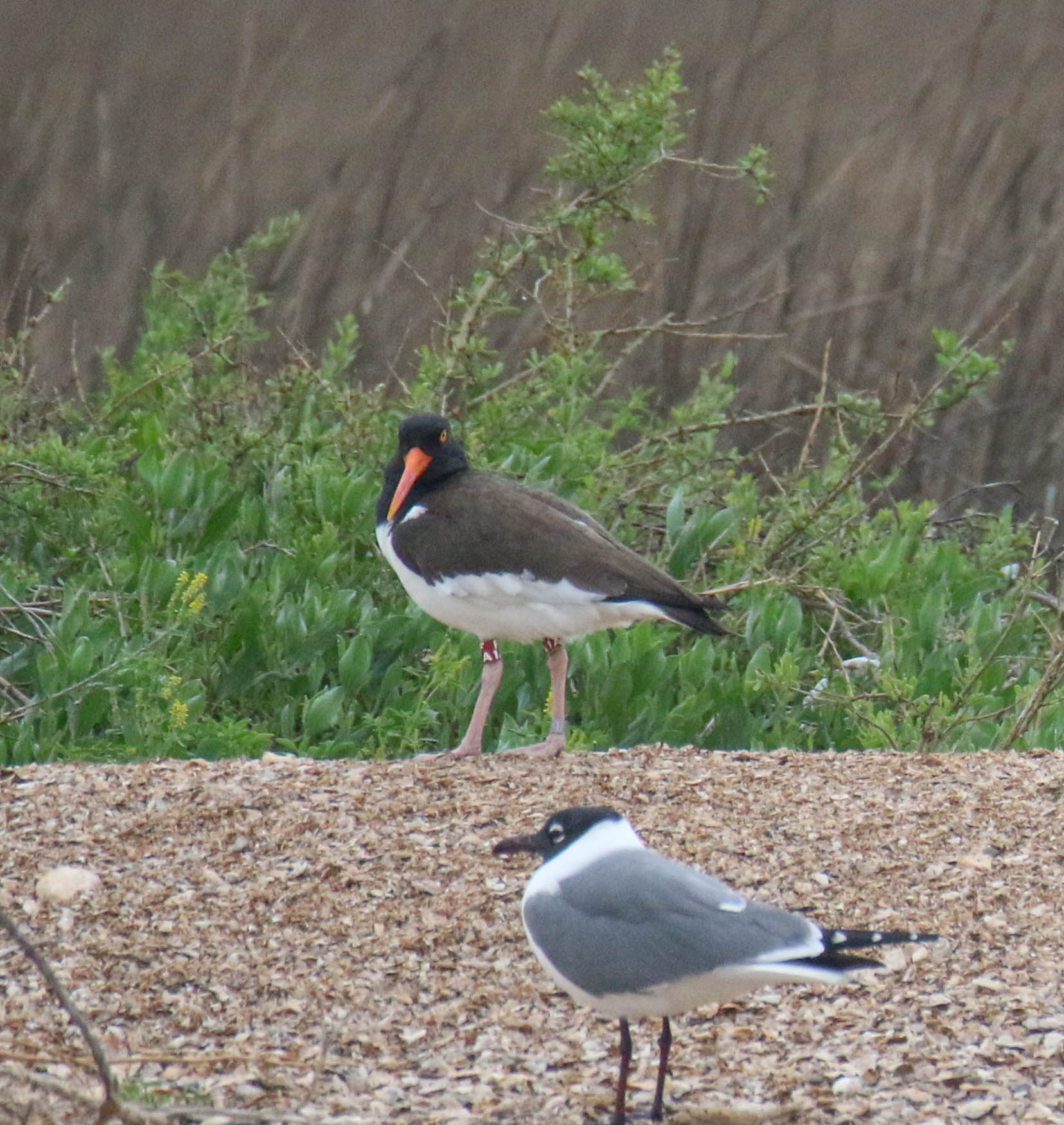 I had hoped to give a good look along the shoreline of South Deer for 16 & mate but that was not possible with the wind so we just motored around to A5A & unbanded to see what they were up to. The situation there was much the same as the previous pair so they must still have chicks too. Great news!

The tide was so high that I didn’t think any of Confederate Reef would be exposed so I headed straight for the Sportsman Road docks but we found no oystercatchers on the usual docks at the west end. Perhaps it was too windy for them in that location. We found two of the youngsters on the Gangs Bayou breakwater and also A1A & unbanded. I guess they don’t have a nest after all. Sad. A4A & unbanded were incubating though so that was good news.

We motored back along the Galveston Island shoreline and found seven more youngsters on various docks along the way but no 16 & unbanded. They appear to have disappeared. We will make a search mission next week if the weather is better! Alan said we should put out an APB on them. It’s worth considering!

JX & YK were incubating their nest but they still only had two eggs. Slacker effort YK! Your first nest should at least have three eggs little lady. Maybe next time. Finally we headed over to Jigsaw to check the last two pairs. Last week Alan spotted a one egg nest for YE & unbanded and I found a two egg nest for LH & T6. This week they had both increased their egg count to three! Now that’s how it’s done. 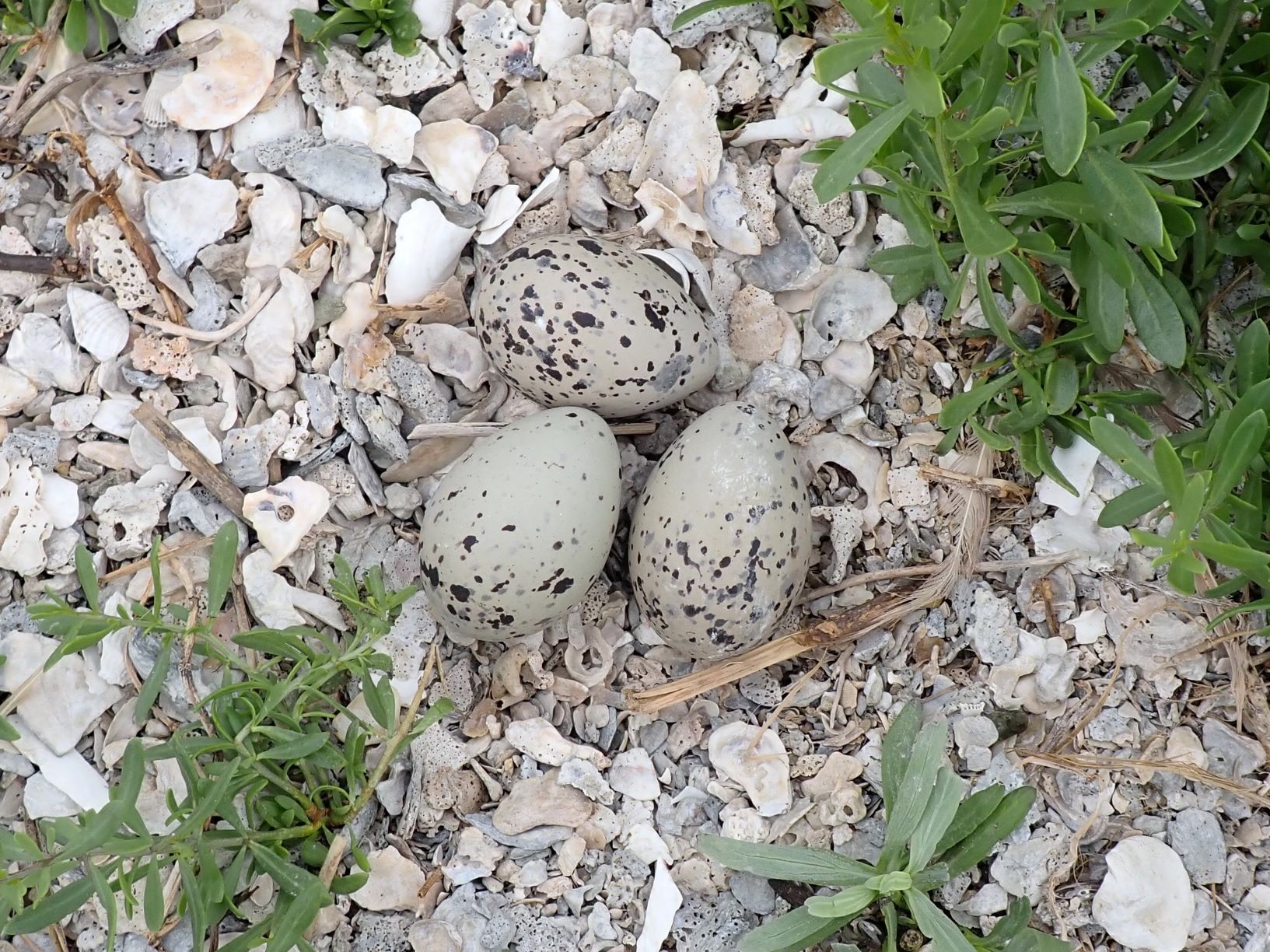 Everyone was glad to be done checking on the birds and we headed back to the boat ramp. Next week there are four more chicks to band! Stay tuned.

On Friday, Taylor, Sarah and I headed out to East Matagorda Bay. At least it was sunny. The wind continued! We checked the Chinquapin Islands first but A7A & unbanded weren’t there so I figured they had decided on the other spot we saw them in last week. We motored across a very choppy bay to Dressing Point but there still weren’t any oystercatchers there so we went along the shore to the Oyster Farm. I fully expected LF & unbanded to have a nest but instead they were huddled together on one end of the island while a hoard of pelicans, white and brown, sat where they usually nest. Dang pelicans.

We headed back across the bay to Old Gulf Cut and found C7A & unbanded present and incubating but they only had one egg instead of the three they had last time. We didn’t find any chicks and they didn’t act like they had any chicks so I’m not sure what happened to the other two eggs. We had a high tide that might have washed them away but I guess we will never know. Over on the other island 25 was incubating her nest with two eggs. They only had two eggs last time too so I guess they figured two is enough.

At this point we were at the west end of where we survey so we had to head east along the intracoastal waterway straight into the east wind. It was not fun I tell you. Anywhere there wasn’t an island between the waterway and the bay it was very rough and we had to go slow. We did not find A7A & unbanded in the other spot we saw them last time so I had no idea where they’d gotten off to. We made our way slowly along the GIWW to where we were in protected water again.

Just about the time we started going fast again, a pair of oystercatchers flew out calling and then went to a tiny shelly area along the waterway where Live Oak Bayou goes out to the bay. I wasn’t surprised to find it was A7A & unbanded. We’d have never noticed them if they hadn’t flown out and called attention to themselves. It’s almost like they were saying “Hey we’re over here!”. Perhaps they will try to nest there. It’s high and they won’t get overwashed but they might get predated by a mammal. No pair has ever tried to nest there but A7A & unbanded don’t seem to be rule followers so we’ll see what happens.