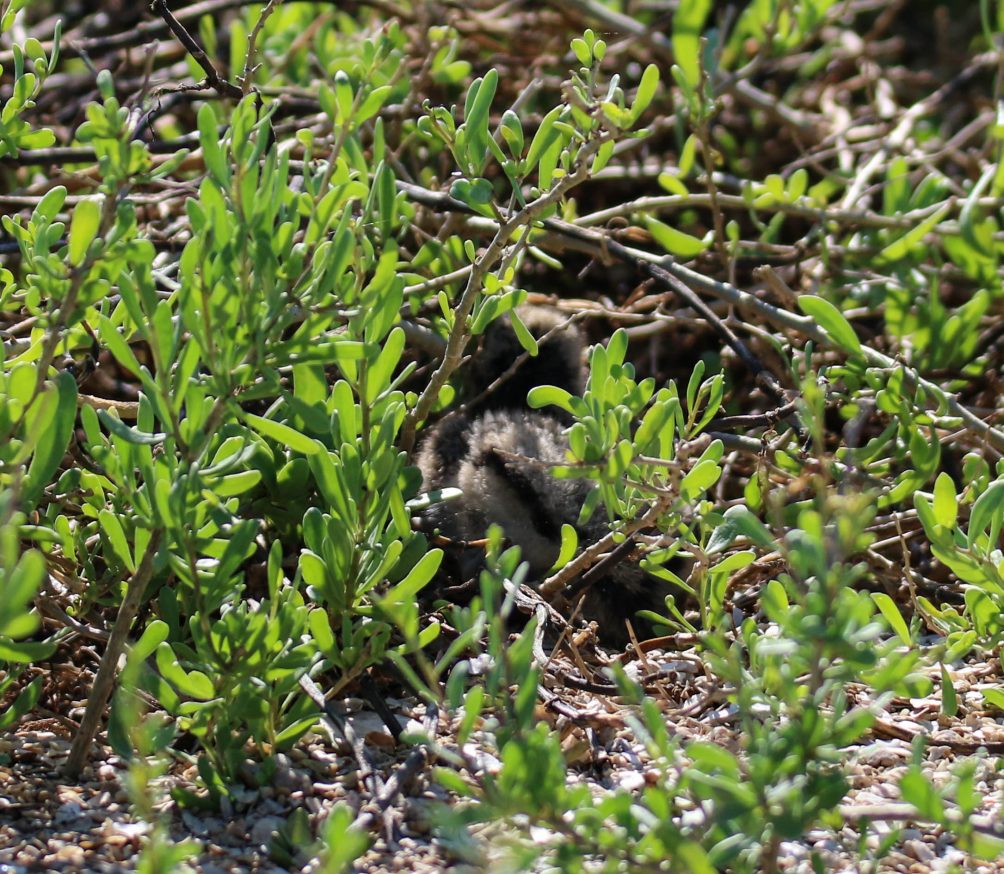 On Monday, Taylor, Sarah and I went to check on the oystercatchers in East Matagorda Bay. Taylor and Sarah had already driven over the new circular bridge that replaced the swing bridge to get over the GIWW but this was my first trip. Wow! When you crest the top and start heading down all you see is Gulf water! It’s quite the trip.

We headed down the GIWW and bypassed Dressing Point since there haven’t been any oystercatchers there this year. We went straight to the Oyster Farm where LF & unbanded have been hanging out but have yet to lay a nest. This week they weren’t even there. This is a favorite resting spot for pelicans and cormorants so perhaps they figured their eggs would get trampled if they laid any. Truthfully, I have no idea. It’s been proven many times that I can’t think like an oystercatcher.

We headed across the bay to Old Gulf Cut where the only real action is oystercatcher wise. C7A & unbanded were back on their island but they hadn’t laid a new nest so we motored over to check on 25 & unbanded. I saw one chick run to hide as we approached. There isn’t much cover on this island so I figured if we looked with our binoculars we could find it and we did. Taylor snapped a couple photos. 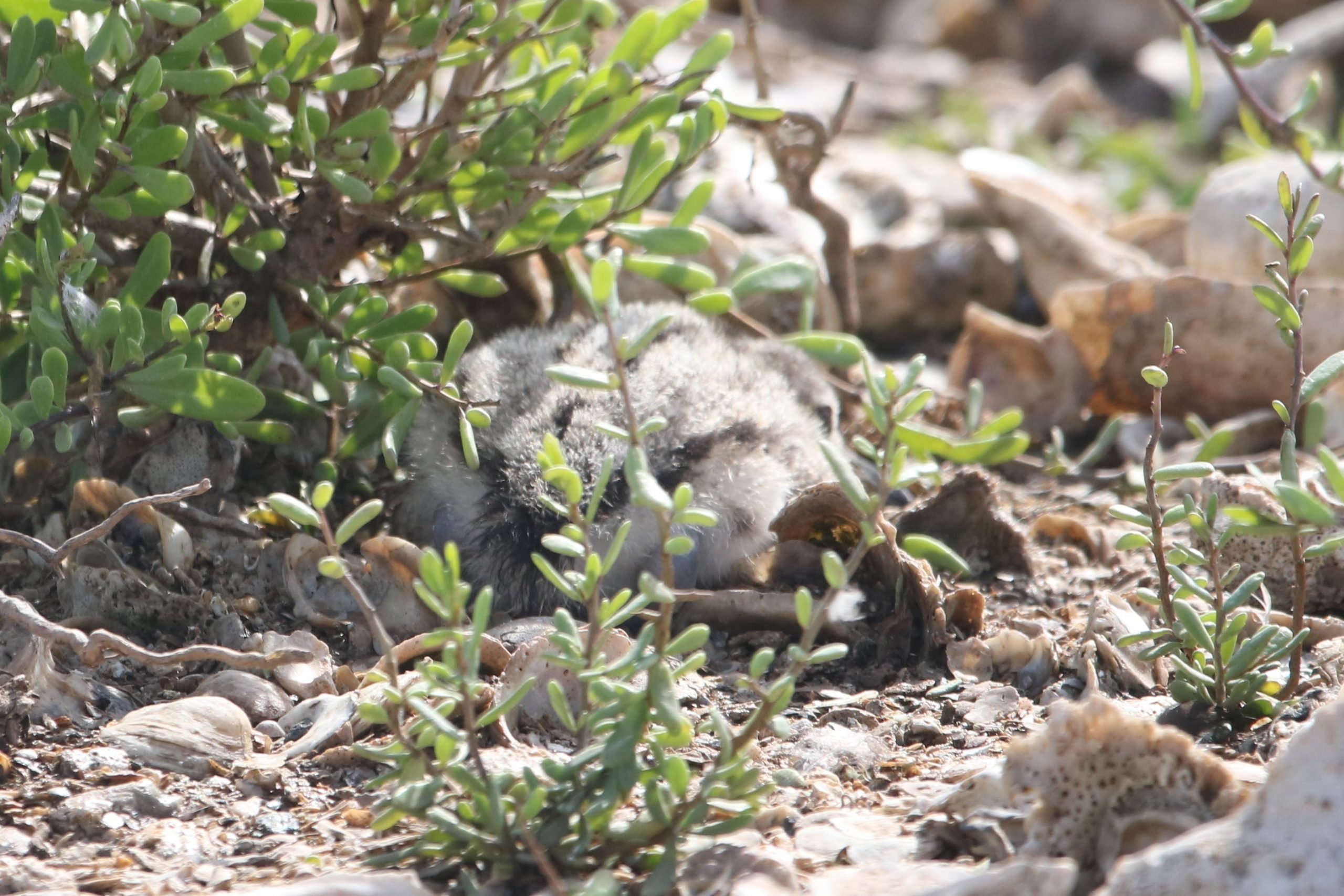 We headed back out to the GIWW and went down to Chinquapin where we found an unbanded bird on one island along the GIWW and A7A on another GIWW island. Neither island had a nest. Perhaps they had a spat and were taking some time apart. See paragraph above about me thinking like an oystercatcher though. That was the end of the birds so we headed back to the boat ramp.

We had to move our West Galveston Bay survey day from Thursday to Tuesday because the wind was predicted to be 20 mph Wednesday through Friday and that is a no go. Lucky for us the weather on Tuesday was beautiful with clear blue skies and little wind. Yay! You have to enjoy those kind of days when they come along. My sister Kay was in town so she joined Alan and I for an excursion around the bay.

We headed up towards Swan Lake first and I’ll be danged if the railroad bridge didn’t start going down as soon as we headed for it! Good thing the water was smooth because it allowed me to go fast so we could sneak under before it was down all the way. First up was 20 & unbanded. I thought their nest would be hatched by now but it wasn’t. I could hear a chick peeping inside one of the eggs though so hatching was imminent. We left them to their business as 20 was quite nervous about our presence. 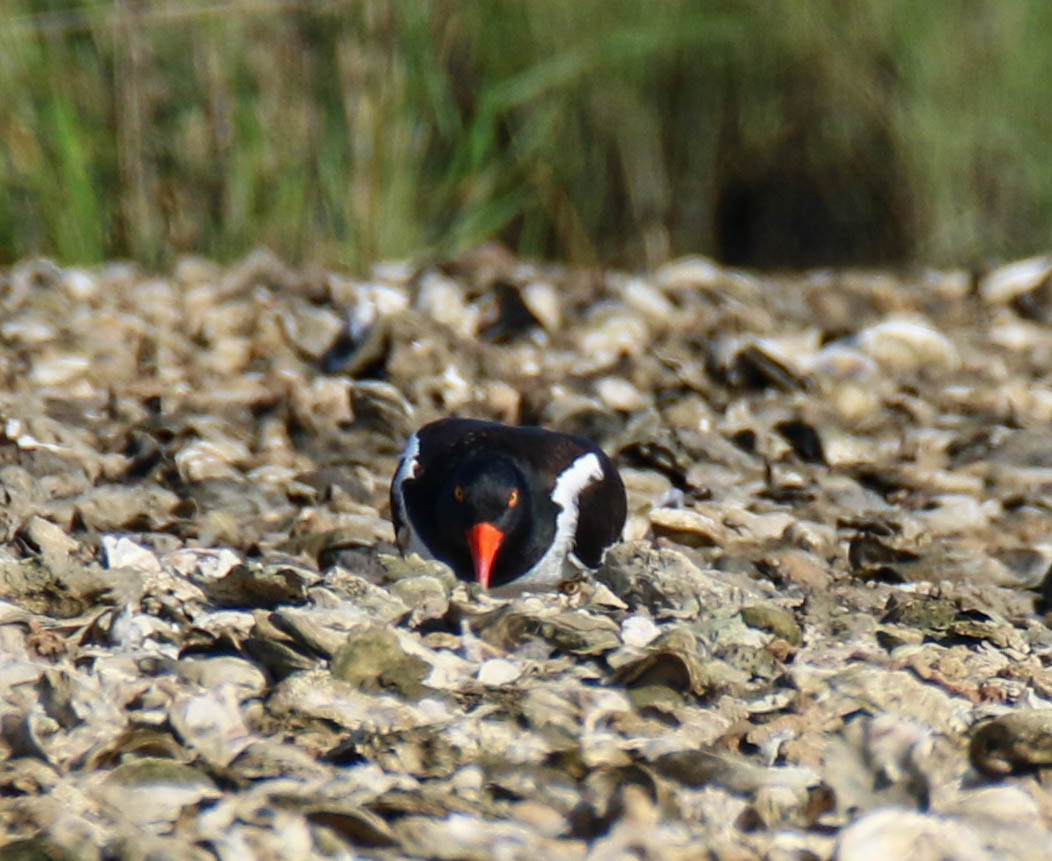 LR & unbanded were next and we weren’t sure what was happening with them since their nest had disappeared. We quickly discovered that they had laid a new nest so something must have gotten the other eggs. Two beautiful speckled eggs. Stay away coyotes! 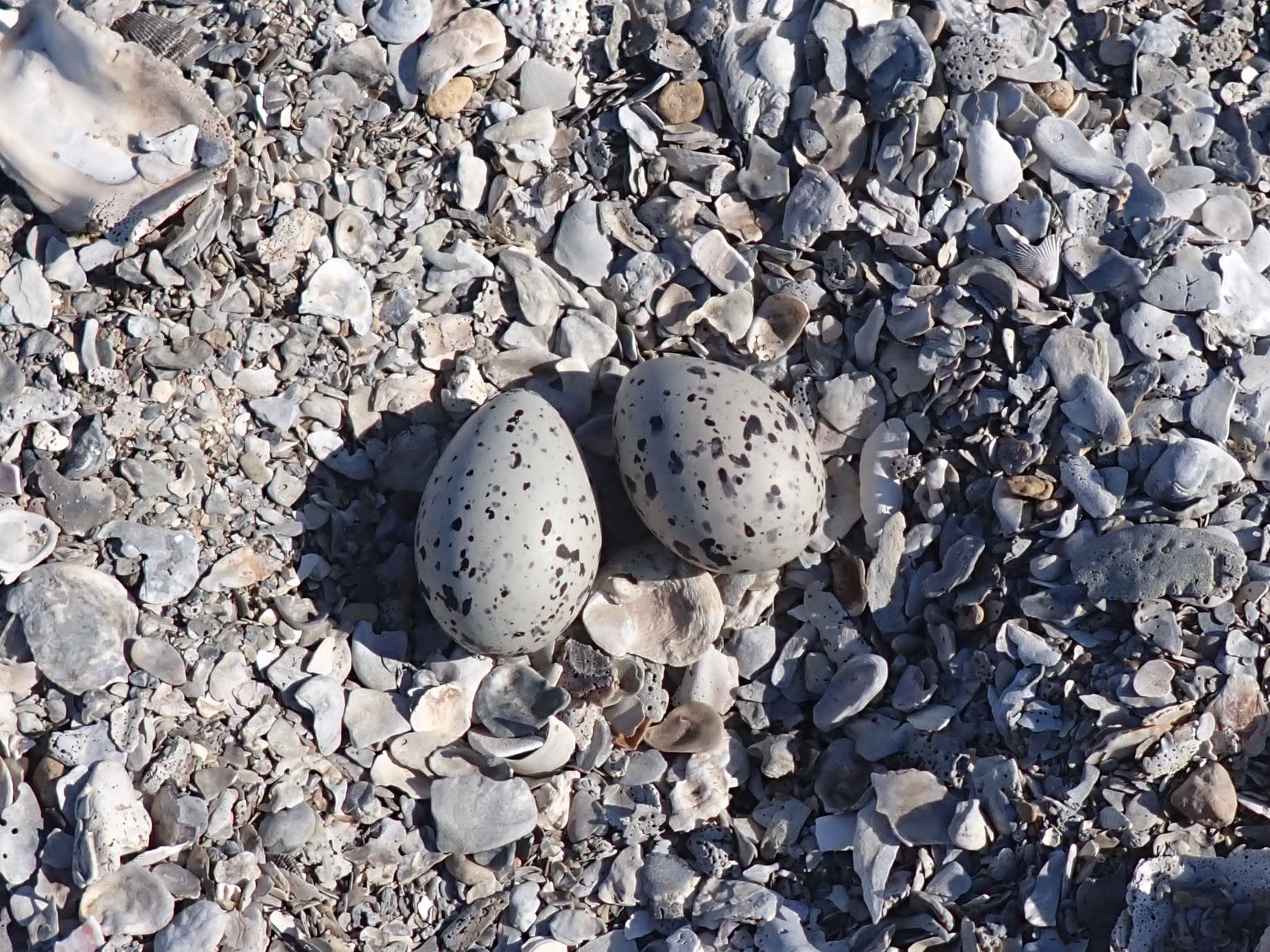 We entered Swan Lake proper and went to see what was up with K7 & unbanded. Unfortunately, the news was not good as they weren’t home. Last time we checked on them they had chicks but their absence clearly meant they didn’t have any anymore. Bummer. 39 & unbanded’s nest was gone too and we found them on the breakwater so another failed attempt. We got better news with X3 & unbanded though. Their nest had hatched and I found one small chick doing its darnedest to hide from us. 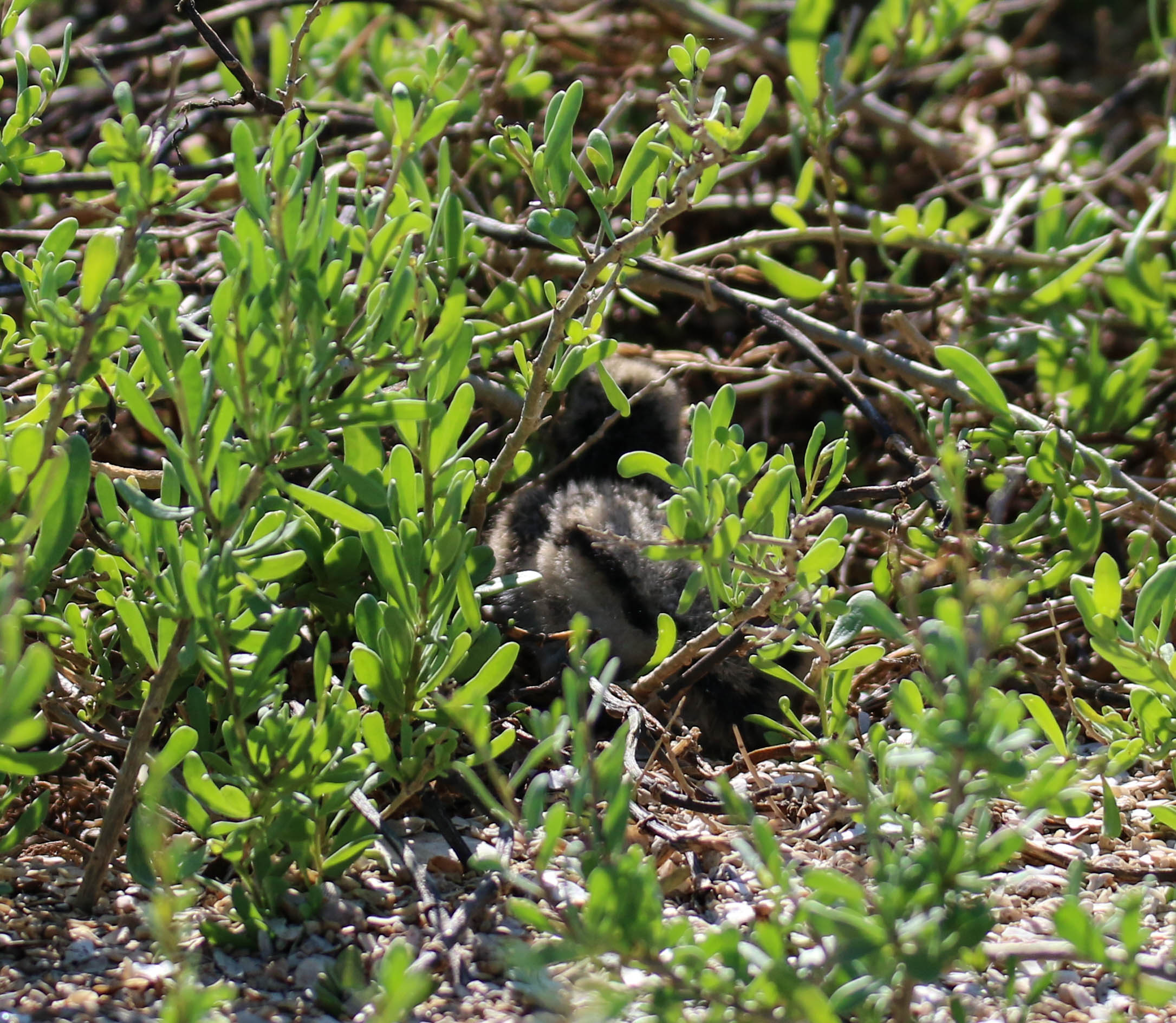 The adults were understandingly distressed so we left them to their business and headed back to West Galveston Bay. Amazingly the bridge stayed up for us this time!

On Struve Luci we found 12 & unbanded with both their chicks and LT & JA with both theirs. We hadn’t seen LT & JA’s chicks fly but I didn’t push them because the skimmers were setting up shop and I didn’t want to disturb them. I’m sure we’ll see those chicks fly sometime soon. 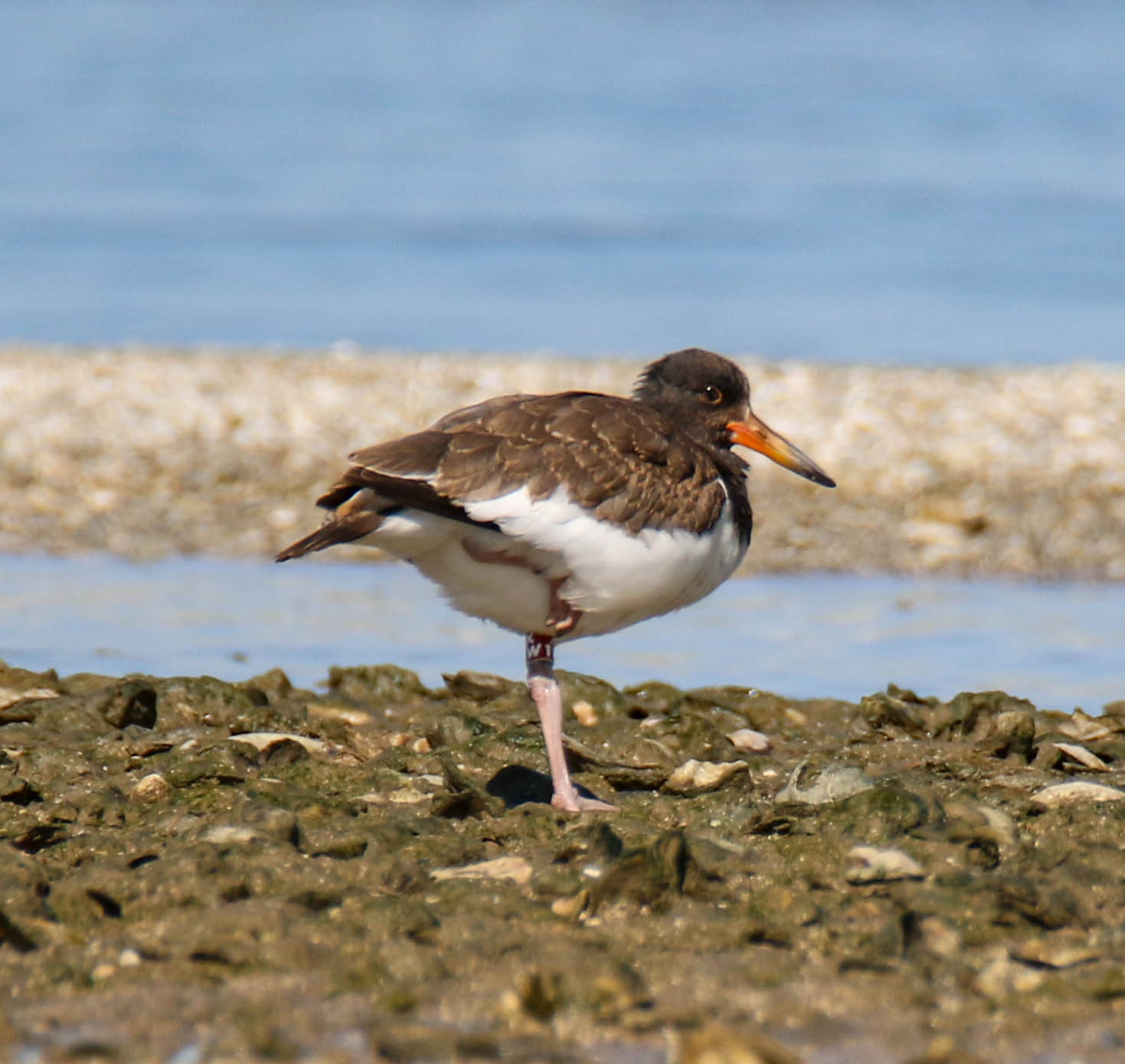 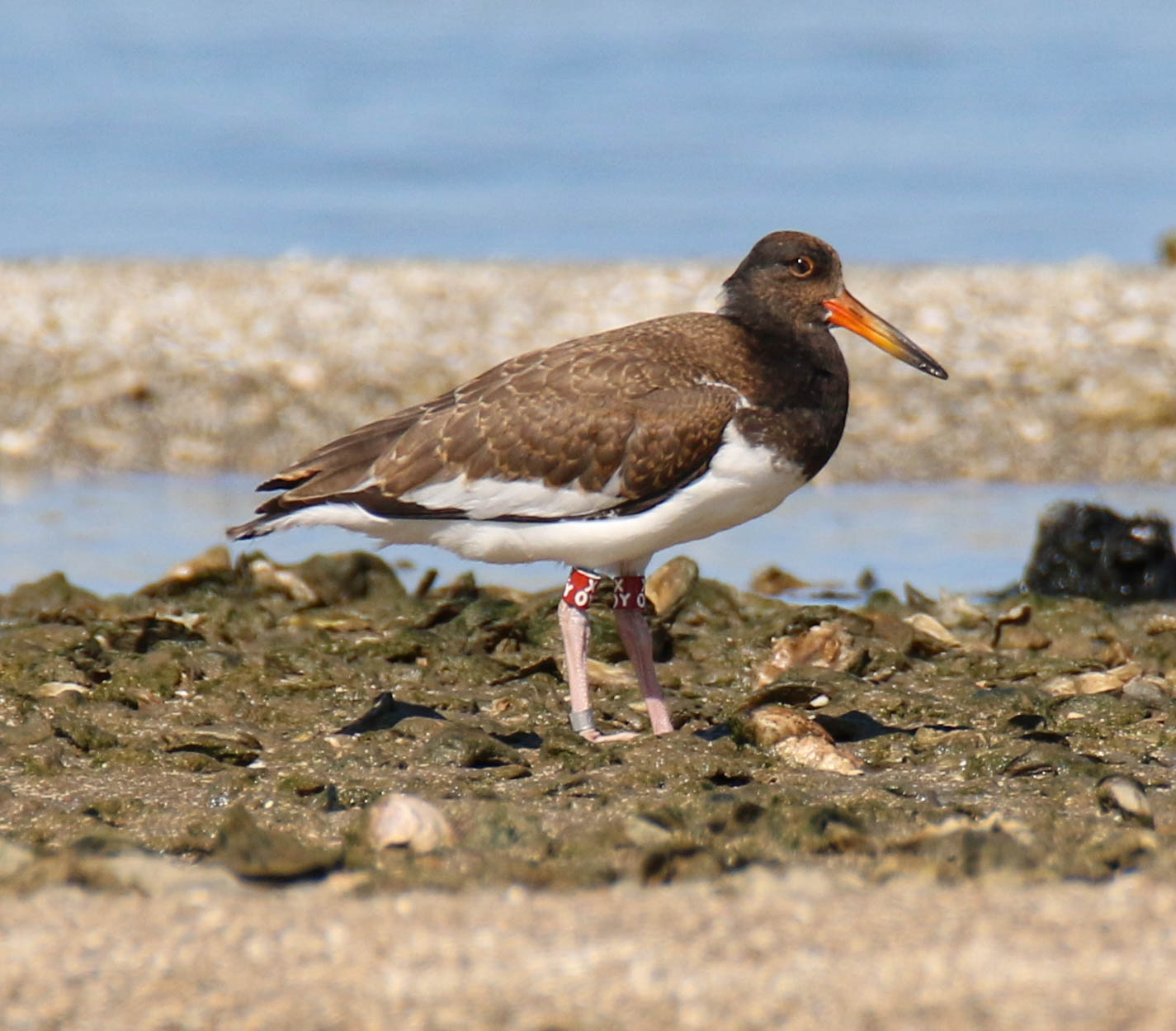 The unbanded pair was hanging out on a shell bank away from the area where their nest had been because the skimmers had taken it over. We didn’t see either of their chicks but they were most unhappy when we approached so I’ll assume they still have at least one and put my spy Kevin on the job to determine if there are two. HM & X7 were hanging out at their end of the island. It’s very sad that they have no place to nest except on Galveston Island where mammals abound. Their part of the island is just too low now to be a successful nesting spot.

That just left L9 & unbanded. Alan had seen one of them amongst the skimmers but when we got back down there it was gone. Then he spotted them up on a high grassy bank on Galveston Island. One of them was laying down as if on a nest. NO! Oh brother. I sure hope it doesn’t have a nest up there as it will surely get predated. I decided to wait until next week to see if they were still up there before figuring out how to verify a nest. 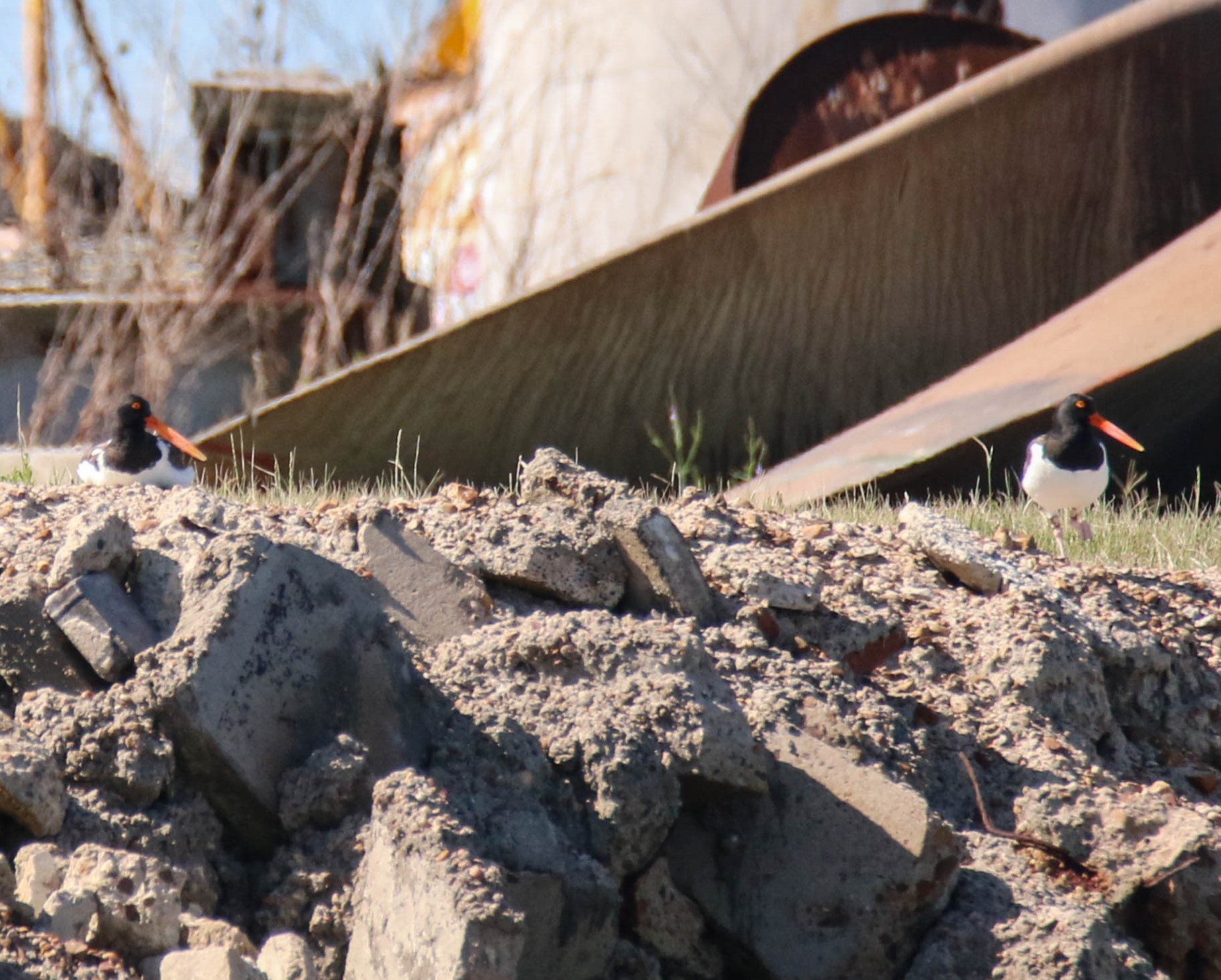 We headed to Jigsaw and found that both nests had hatched. LH & T6 definitely have a chick as one of them kept giving a triple alarm call over and over again when we approached. That is a communication only used for chicks and I don’t hear it much. YE & unbanded didn’t seem concerned about our presence at all though so I’m not sure if they have any chicks or not. We’ll just have to watch and see.

We headed over to the shore of Galveston Island and found that, as predicted, JX & YK’s second nest had failed. Now you know why 16 gave up that territory JX. There are just too many mammals. Speaking of 16, we found him hanging out at the end of 8 Mile road with a few of the youngsters. F9A was not with him so perhaps she has already abandoned him. We can hope she was off scouting for a nesting spot though.

On South Deer, we found F2A & E3A out on the reef with both their chicks. When we approached the chicks flew with the adults! Yes! Another two chicks fledged. 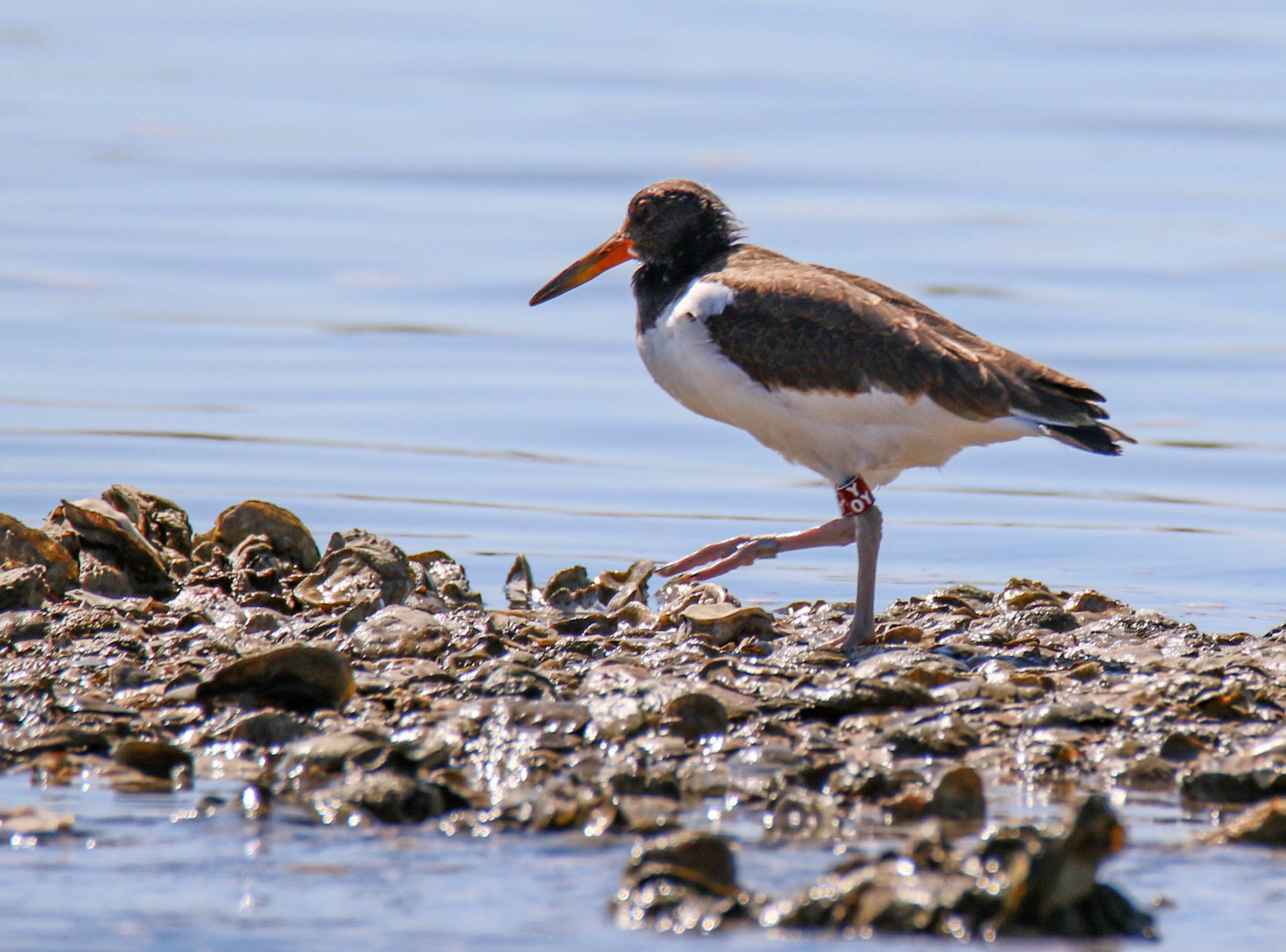 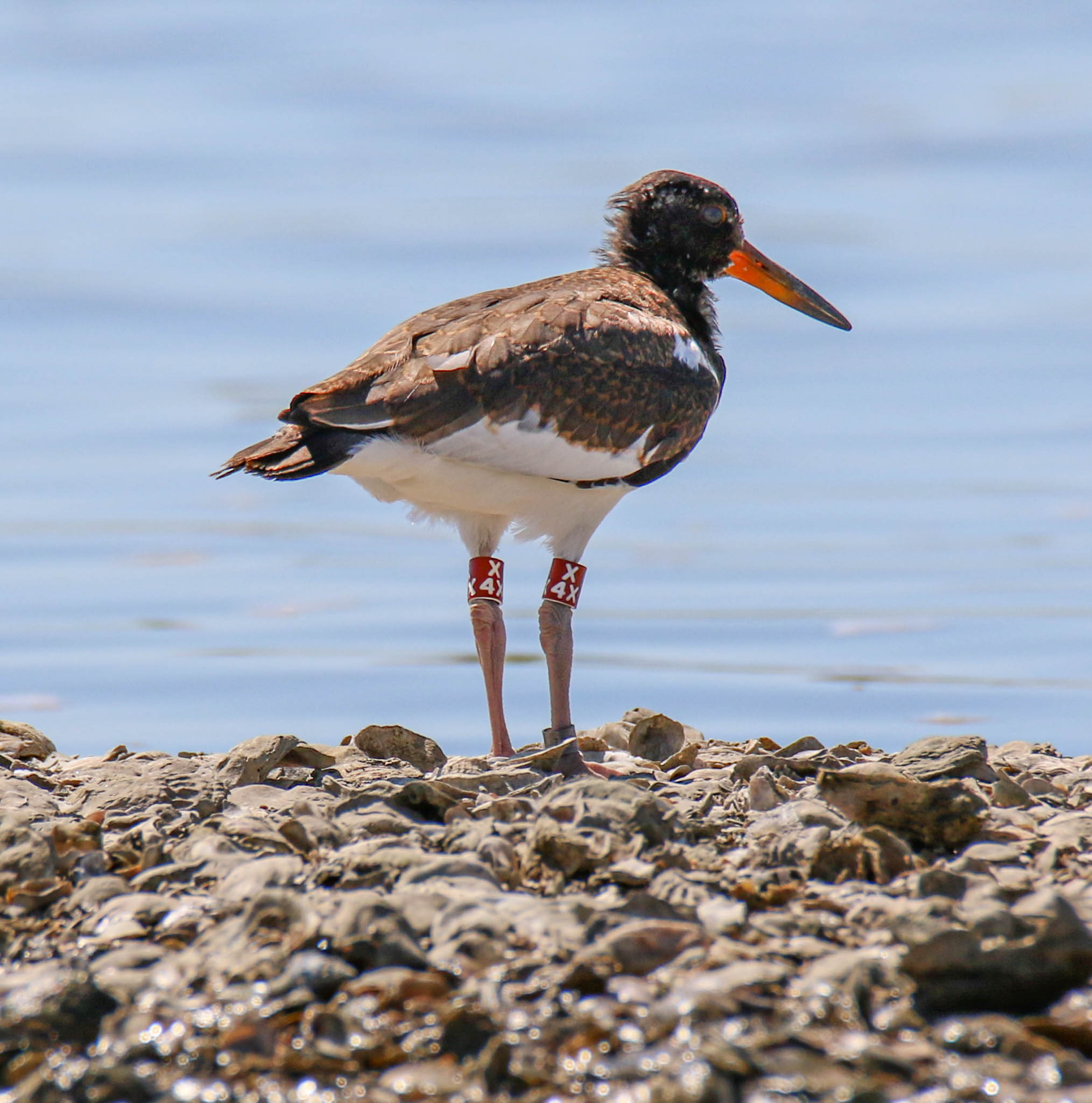 Aren’t they just the cutest? Sadly, it appeared Y7 & unbanded’s chick did not make it as we found both of them out on a reef. I think there are just too many gulls there. This was the week to band A5A & unbanded’s chicks but when we got around to their territory they were nowhere to be found. What happened? Their chicks were too big to be predated by a gull. What a bummer. We got a surprise when we motored along the shoreline looking for them as we found A1A & unbanded in KK’s old territory which is next to A5A’s. A1A & unbanded are from Gangs Bayou but we haven’t seen them over there in a while. It appears they moved to South Deer. They didn’t have a nest but they had some fresh scrapes so hopefully soon. We never found A5A & unbanded.

There were no oystercatchers at all at Gangs Bayou so that means A4A & unbanded’s nest failed too. A lot happens when you miss a week of monitoring! I have suspected for a while that caracara’s are predating the chicks in this area and that could be what happened to both the A4A chicks and the A5A chicks. I love caracaras but dang can’t they eat Laughing Gull chicks or something? I guess they probably eat those too. There are just a lot more of them so we don’t know it.

We headed across the bay and once again did not find Brown Boobies on the shell marker signs. I guess I need to give up on that. They are gone. We expected to find YM & JH with a chick on North Deer but instead we found nothing. They weren’t there. Another chick predated! Just about every chick that was hatched last time got eaten by something. That is the risk with waiting until now to nest. There are just too many other hungry mouths around.

J6 & UF were still on the breakwater but they didn’t look like they had anything going on. C1A & unbanded’s nest was gone too. The pelicans might have stepped on the eggs or eaten them. No telling. Alan spotted a Diamondback Terrapin sitting on an old tire in the water. 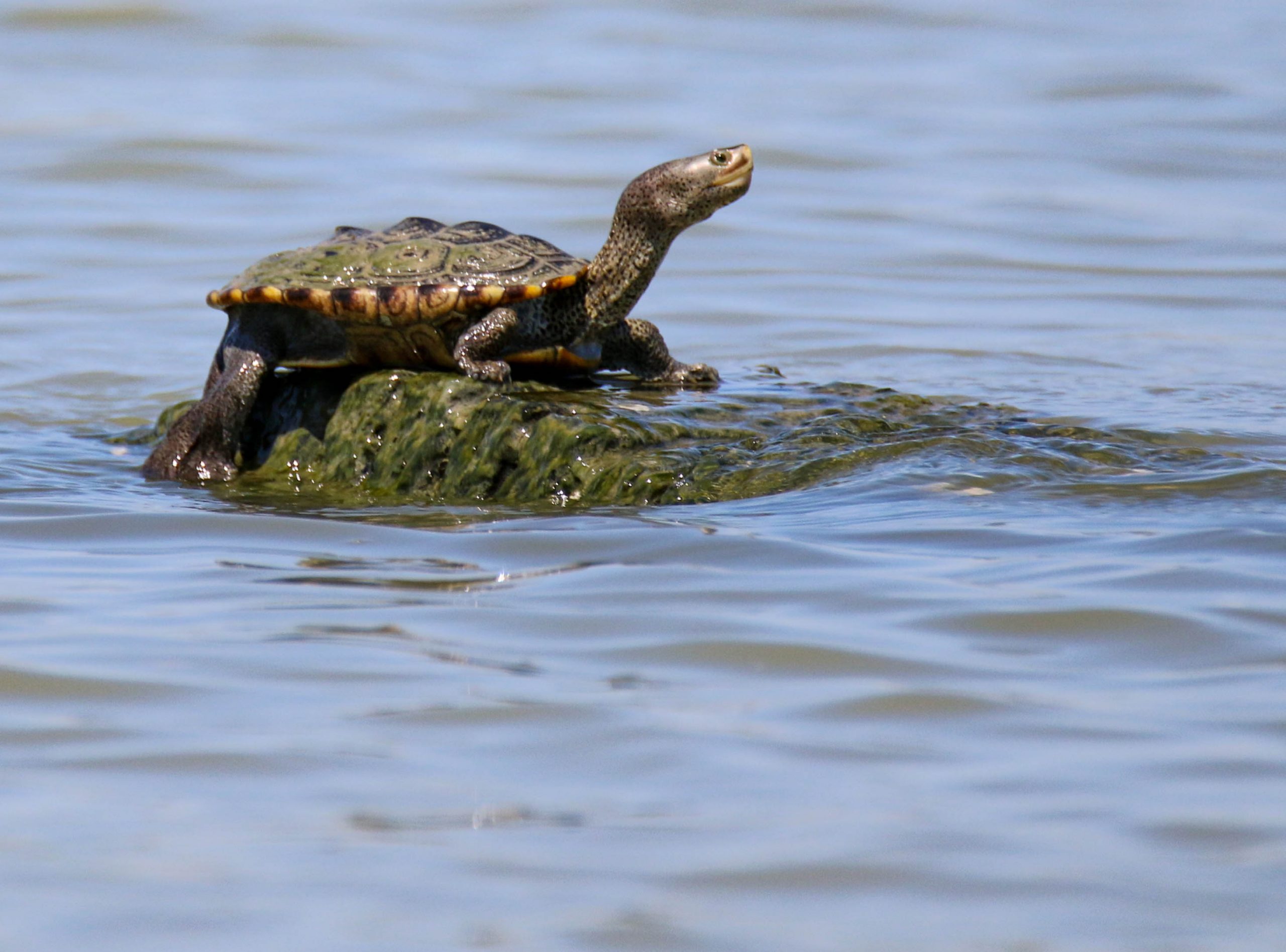 That must be a favorite spot for them as we’ve seen one on that tire before! I was expecting E6A & unbanded’s chicks to be fledged but when we approached one ran into the spartina to hide and the other one started swimming to get away. 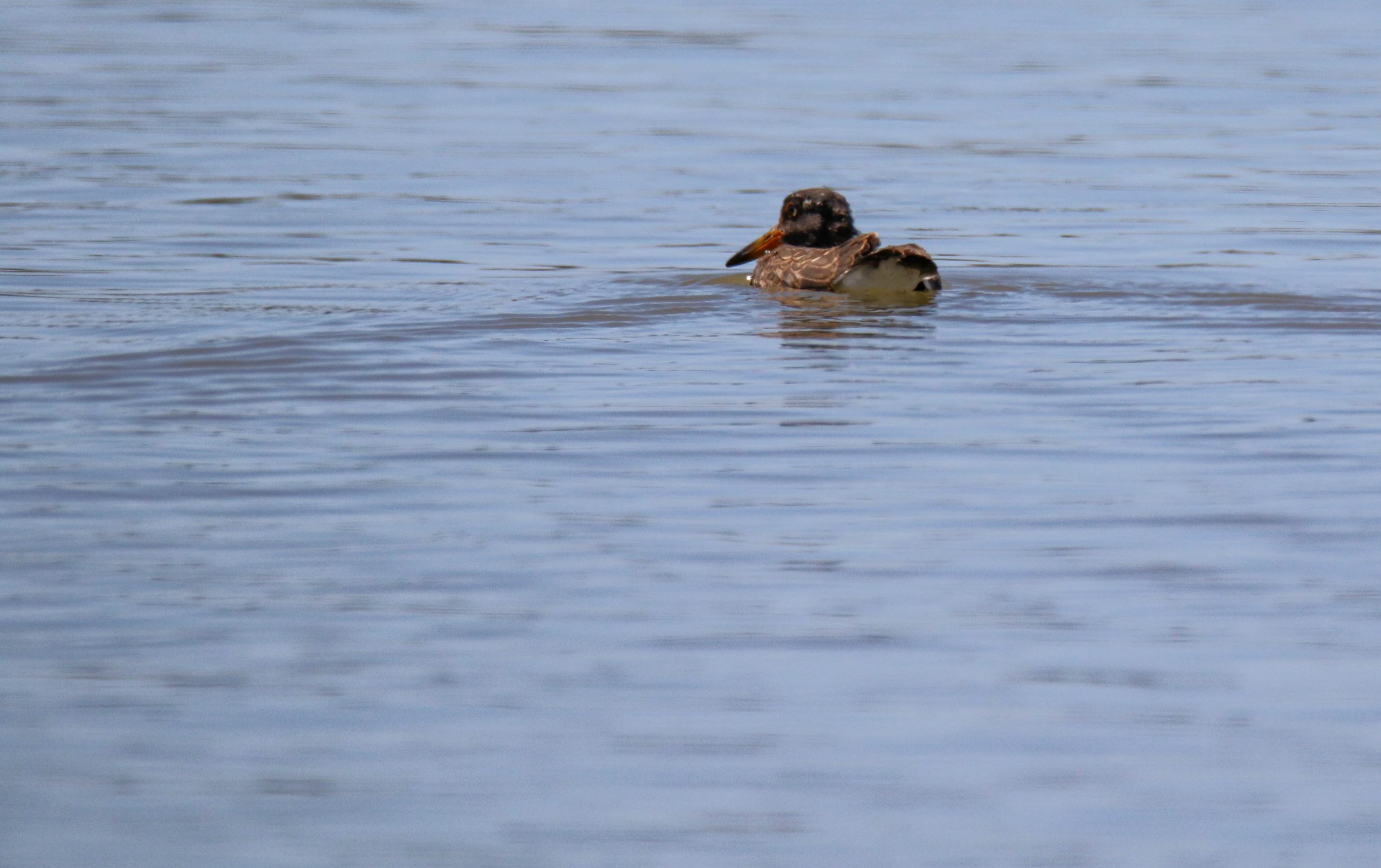 They have a low draft don’t they? We left so it would swim back. They’ll be fledged next week for sure. On Marker 52 we found P4 out feeding in the water but her mate JJ was not around. Their territory is infested with pelicans too so I guess they gave up. When we reached W5 & JC’s territory, we saw W5 standing in an awkward position that told me he was shading an egg. 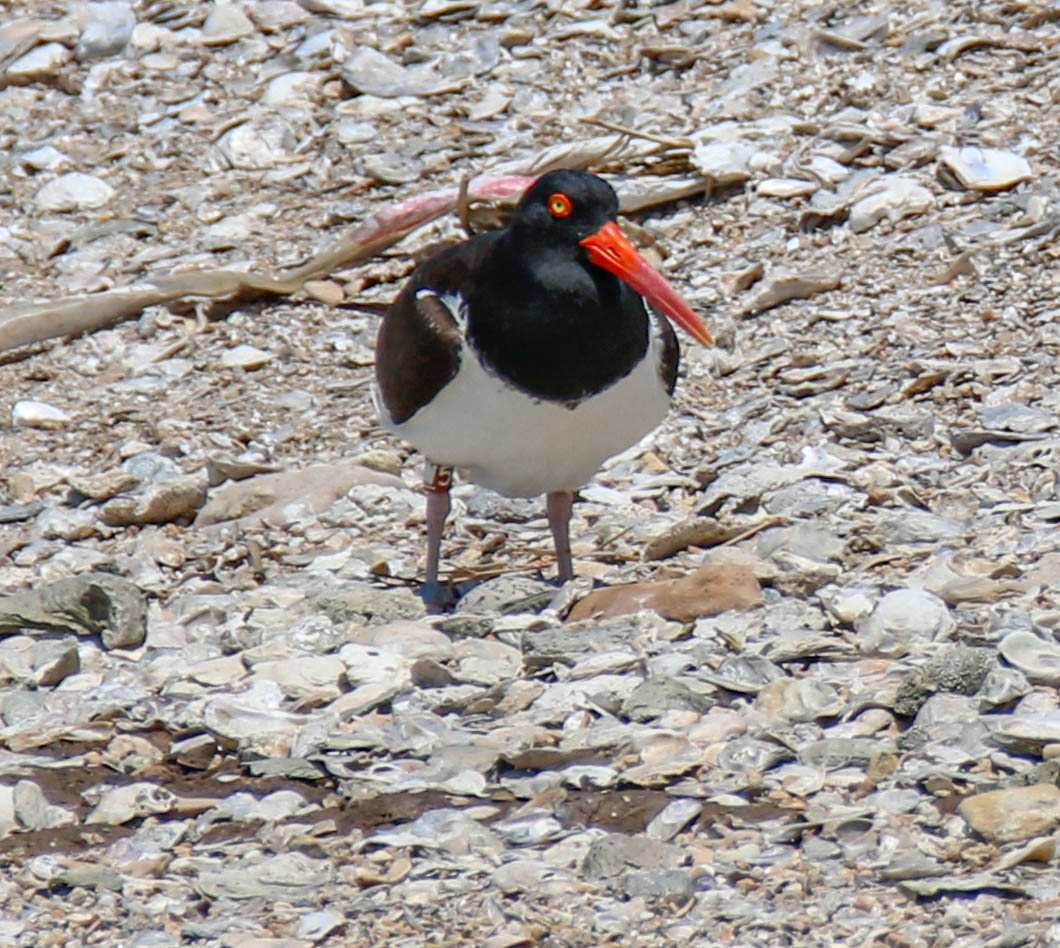 I investigated and sure enough I found a single egg. I guess they aren’t incubating yet but he didn’t want the egg to get too hot in the sun. Get to work JC and lay some more eggs! FR was out on a reef with both his chicks and when we approached they both flew! Another set of fledged chicks. FR was training them right as both chicks circled the boat giving us the business. Perhaps they were just saying “nah nah we can fly now and you can’t get us!”. Go for it little ones! 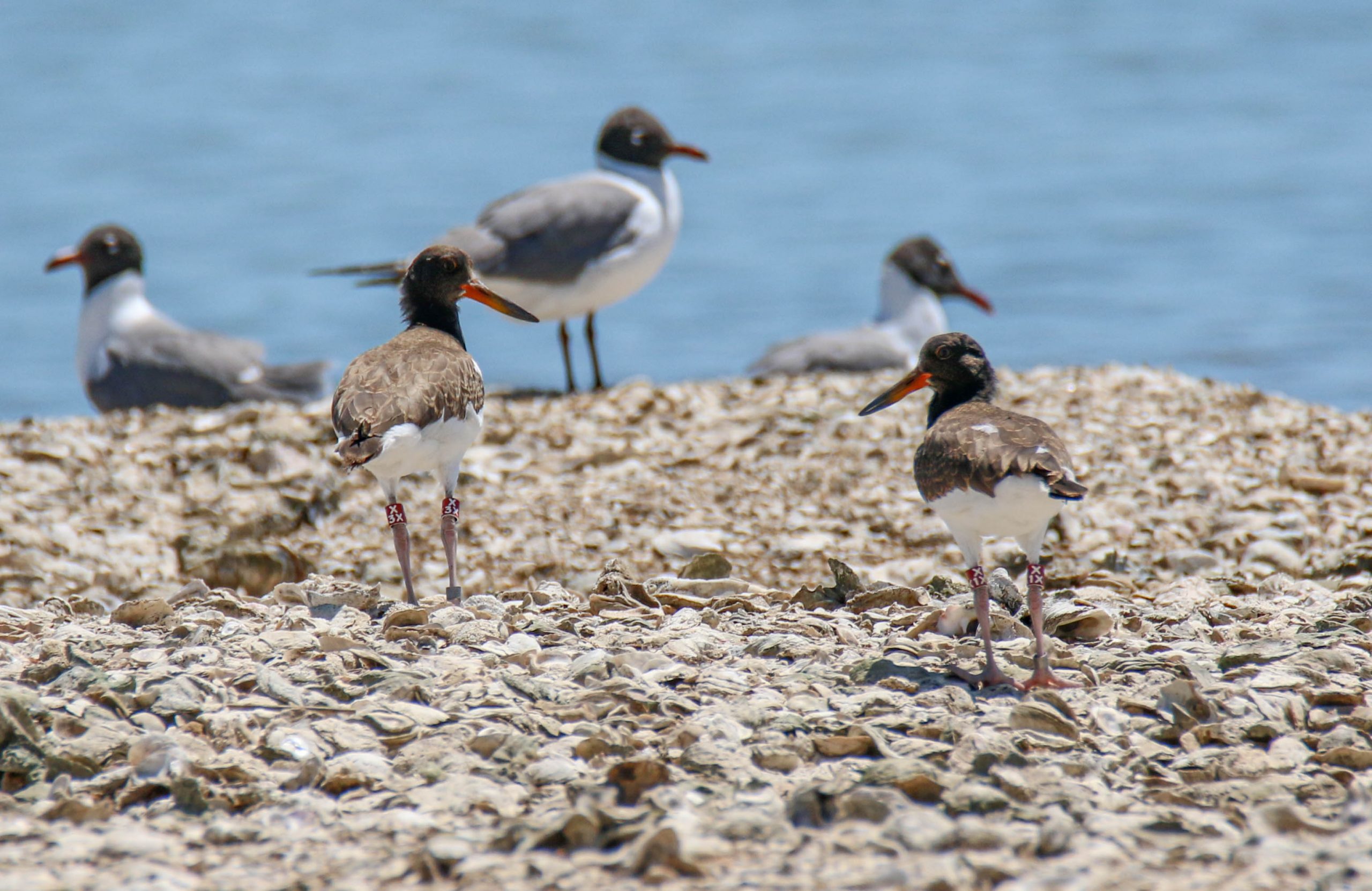 CA & Y2 were both on their island and very agitated about us approaching so their chick must still be ok. We found a dead Yellow-billed Cuckoo floating in the water near there. A reminder that lots of neotropical migrants don’t make it when they try to fly across the Gulf. This poor bird was almost there though. It must have just run out of energy to make landfall.

E9A & unbanded were not on their island so that wrapped up the survey. Lots of failed nests now but hopefully some of the new ones will make it. Eight fledged chicks is wonderful though!