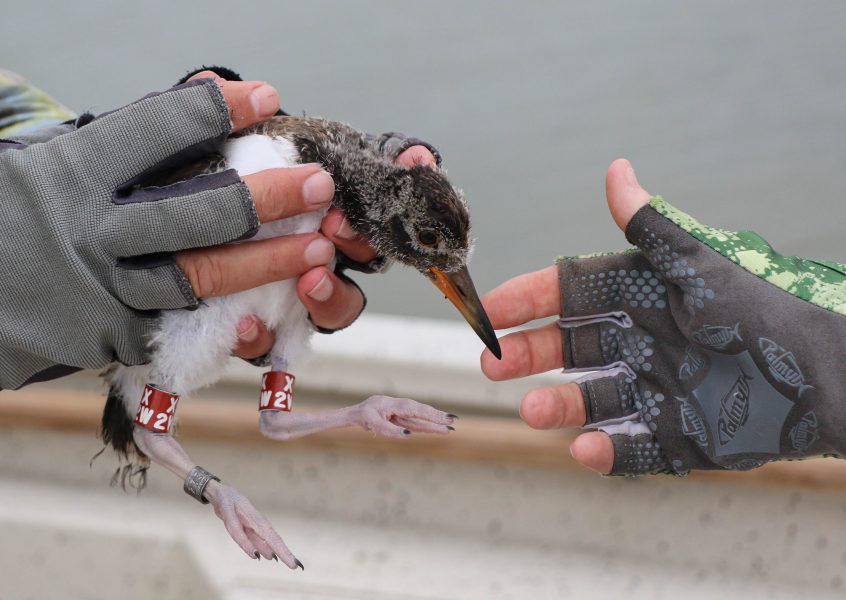 On Monday, Taylor, Sarah and I took the GCBO RV volunteers, Tom and Karen Schmitz, out for a trip on the Brazoria Bays. We left from our usual boat ramp on Bastrop Bayou and headed for the west end of West Galveston Bay. It was a little rough getting across the bay so Tom and Karen got to see what it’s really like out there doing fieldwork! When we got to the island at the mooring facility we saw F2A was incubating he and E3A’s nest. Great! I was afraid the gulls would get it. I needed to check if they had laid another egg because it only had two last time so I went over to see. Still two eggs.

I noticed a piece of fishing line in the bushes so I went to grab it and discovered it had six entangled birds strung out. Oh no! Three Laughing Gulls, a Royal Tern and two White Ibis. We got to work untangling them but only one gull and one ibis were still alive. Awful! We made sure we collected all the line so no other birds would get entangled in it. 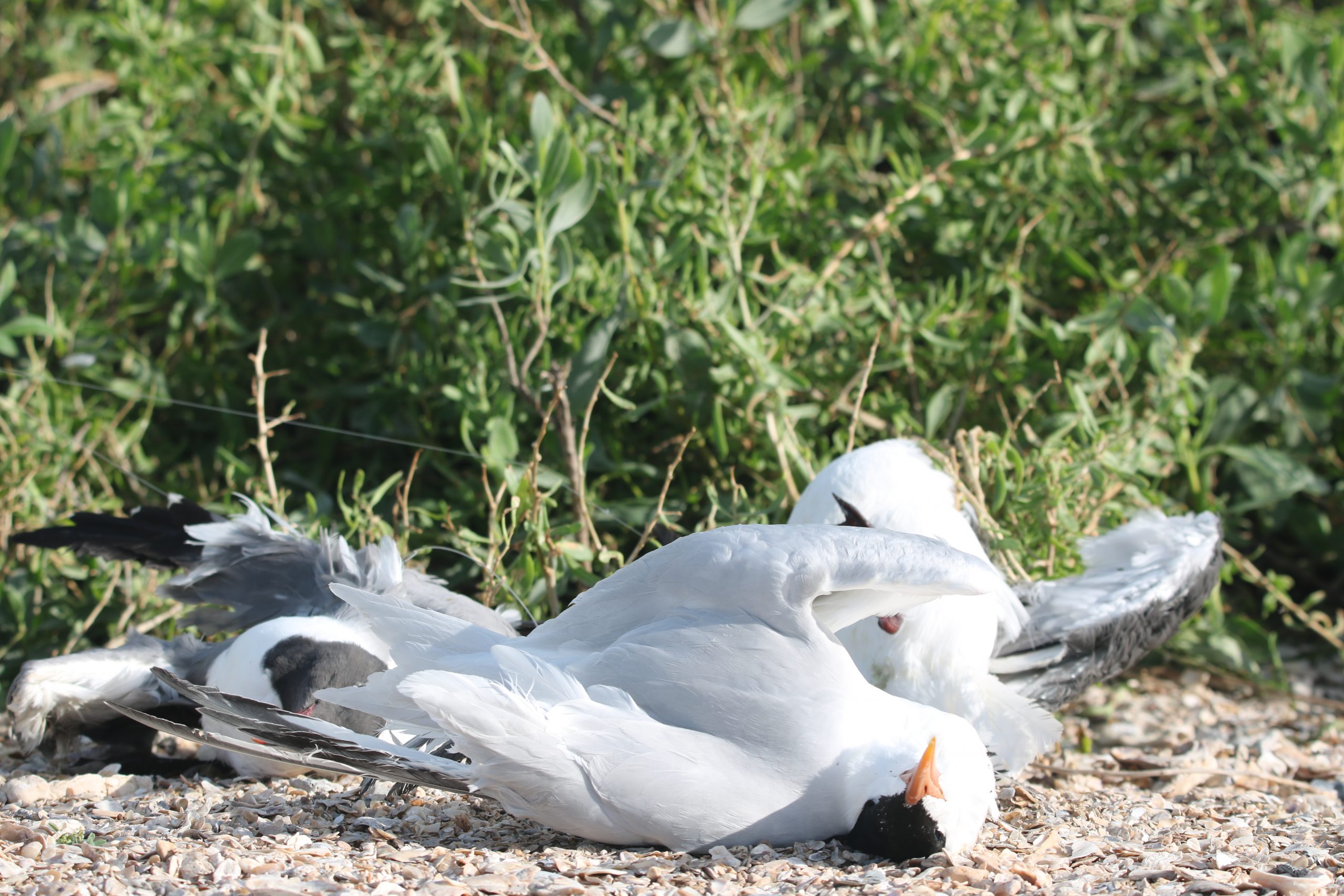 Fishing line is so deadly for birds, turtles and other wildlife. Please pick it up whenever you see some laying around!

We headed back across the bay and checked on the unbanded pair on Alligator Point Island. As usual we didn’t see them from the boat but when we stepped on the island, they appeared from somewhere. I have yet to figure this pair out. We searched again for a nest but didn’t find one. One of these days we’ll figure out what’s up with them!

We headed down the GIWW to Bastrop Bay but neither of the pairs that belong there were home so we went across Christmas Bay to check on JK & unbanded and their chicks.  We saw both adults up on a shell ridge with one chick. We couldn’t tell if the other chick was still there or not. It could have been hiding or obscured by the vegetation. 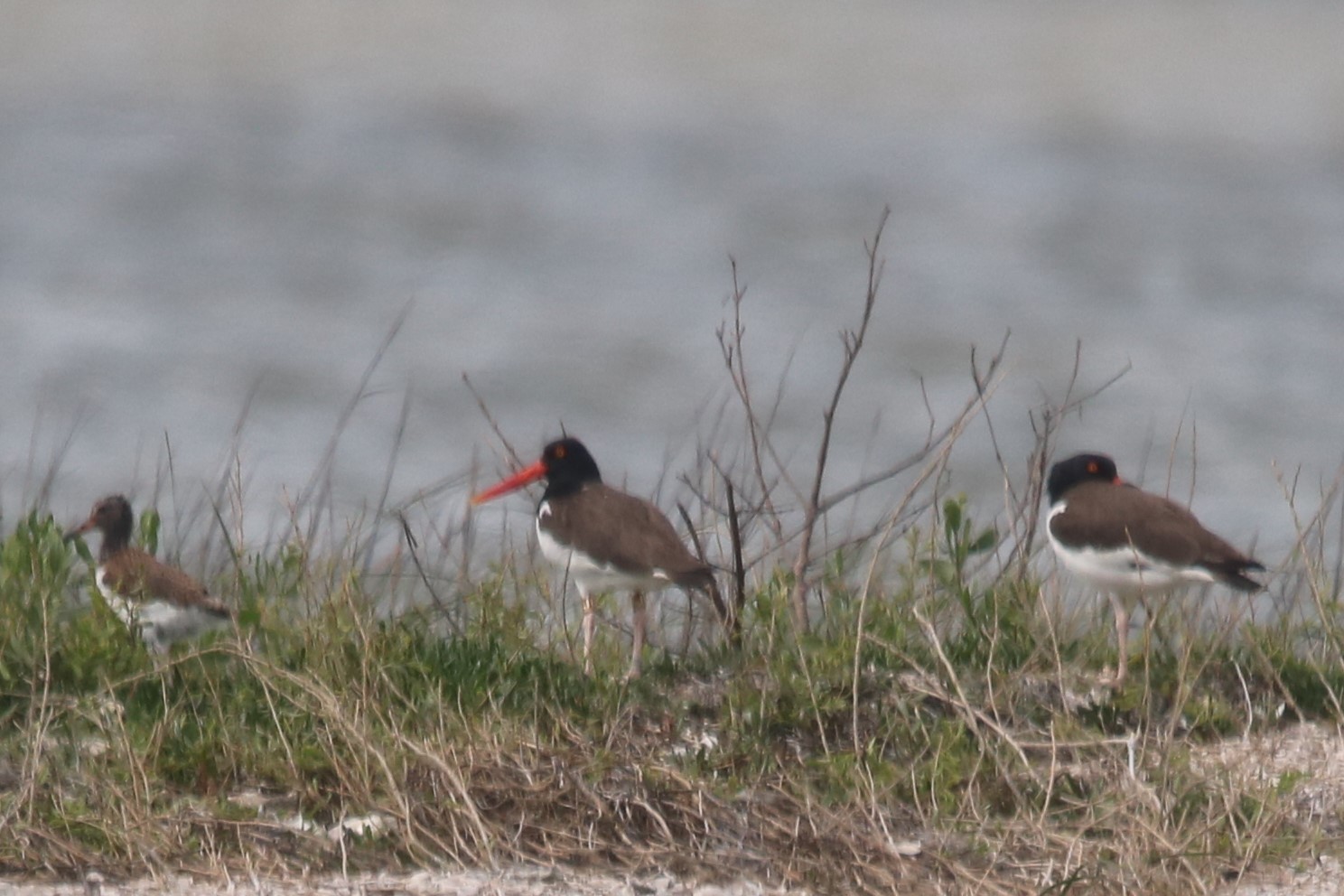 Then we went to check on K0 & unbanded’s nest. It’s on a finger off a big island along the GIWW and I know there are coyotes, pigs, and other mammals on those islands so I am fearful for this nest. They were still incubating two eggs though so all was well. We headed back to the boat ramp happy that there is still at least one chick and two nests going strong.

I was supposed to go to West Galveston Bay on Thursday with Alan Wilde and John Wright but the weather forecast looked pretty bad for Thursday so we went on Tuesday. Of course as I sit here typing this on Thursday there is not a drop of rain and the weather looks pretty decent! You can just never tell.

Anyway, on Tuesday I had intended to head up to Swan Lake first but the railroad bridge was down and the tide was high so we went to Jigsaw first. One of LH & T6 was up in the vegetation so I took that as a sign that they still have at least one chick and left them alone. YE & unbanded were standing one out in the open and the other in the vegetation so I thought maybe their nest didn’t fail after all, but when we searched we found new scrapes and no chick. I guess they are going to lay another nest. I have no idea what happened to their chick(s) as there aren’t many gulls on this island, unless of course the caracaras paid a visit.

I really wanted to get Swan Lake done before the wind picked up but the bridge was still down. I decided to see if we could fit under it even with the high tide. We discovered that we could and just as we were passing under it started going up anyway. The jig is up bridge! Now we know we can go under pretty much any time. Yahoo!

We went to check on 20 & unbanded first. Last time we had heard a chick peeping from inside one of the eggs. Today we saw they had two chicks! 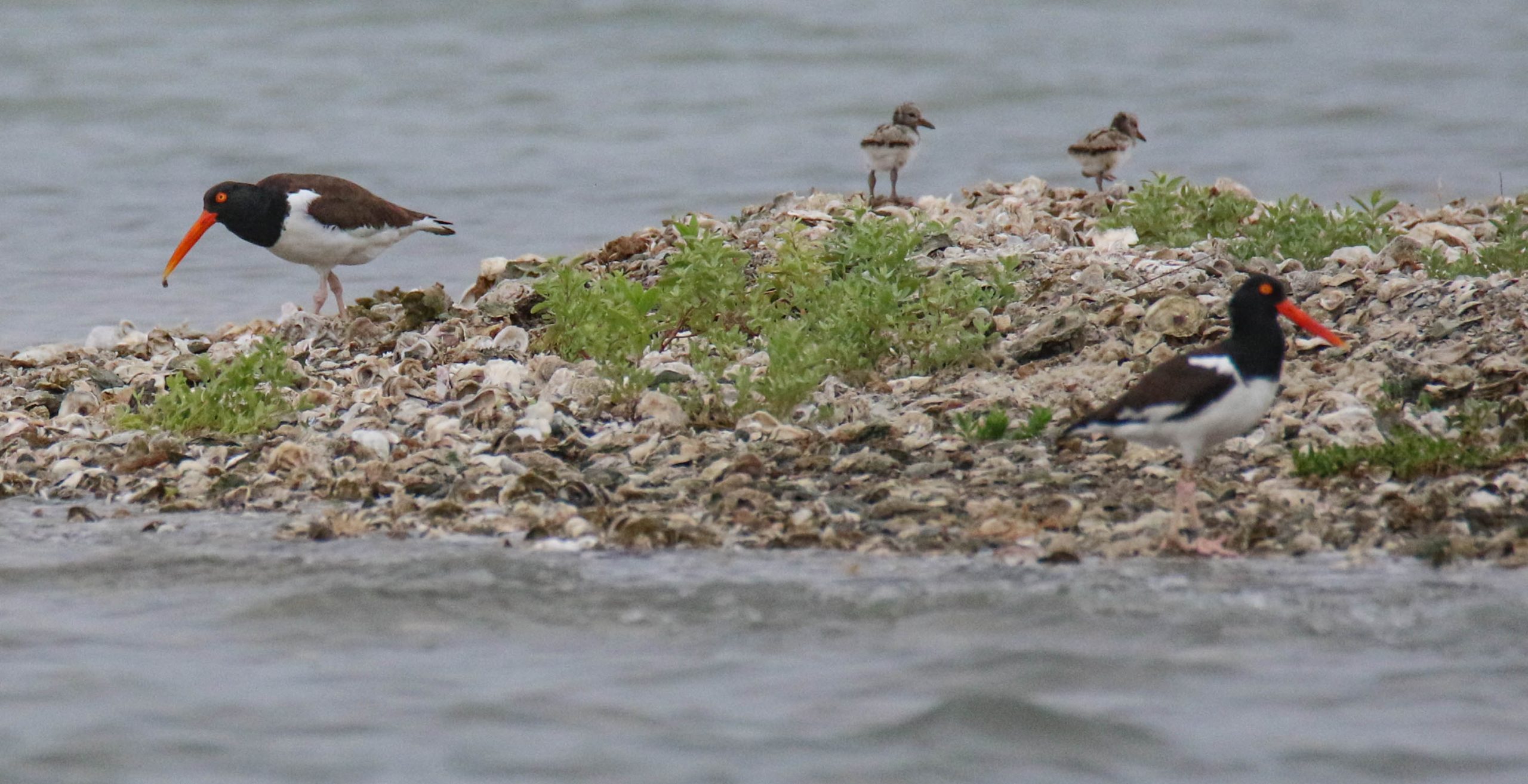 Awesome! Sadly, we discovered that LR & unbanded’s second nest had failed just like the first one. I think a coyote must have discovered their nesting spot. Poor birds.

In Swan Lake proper the mystery K7 & unbanded continued. They were on a small island in their territory created by the high tide but they flew when we got close. We searched again but didn’t find any chicks or a new nest. I will not believe they don’t have a chick until they lay a new nest though. They are the sneakiest of the sneaky!

39 & unbanded were nowhere to be found. When we got to X3 & unbanded’s territory we saw this.

And then I saw this! 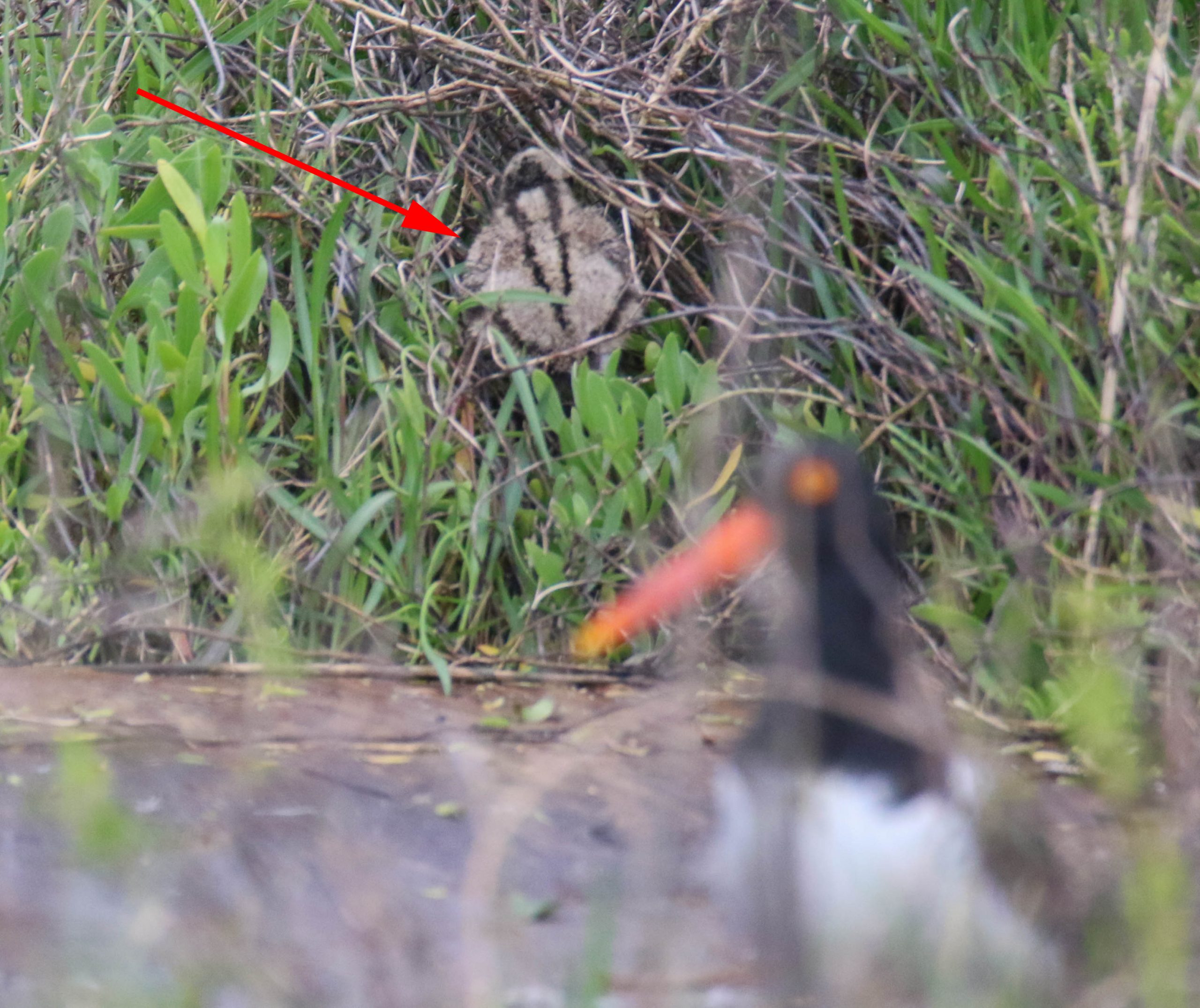 Yay! Their chick is still alive. I sure hope that little one makes it. This pair hasn’t fledged a chick in quite a while.

That was the last pair to check there so we headed back to West Galveston Bay and went to Struve Luci. 12 and family were posing nicely in the small area of their territory that was above the high tide. 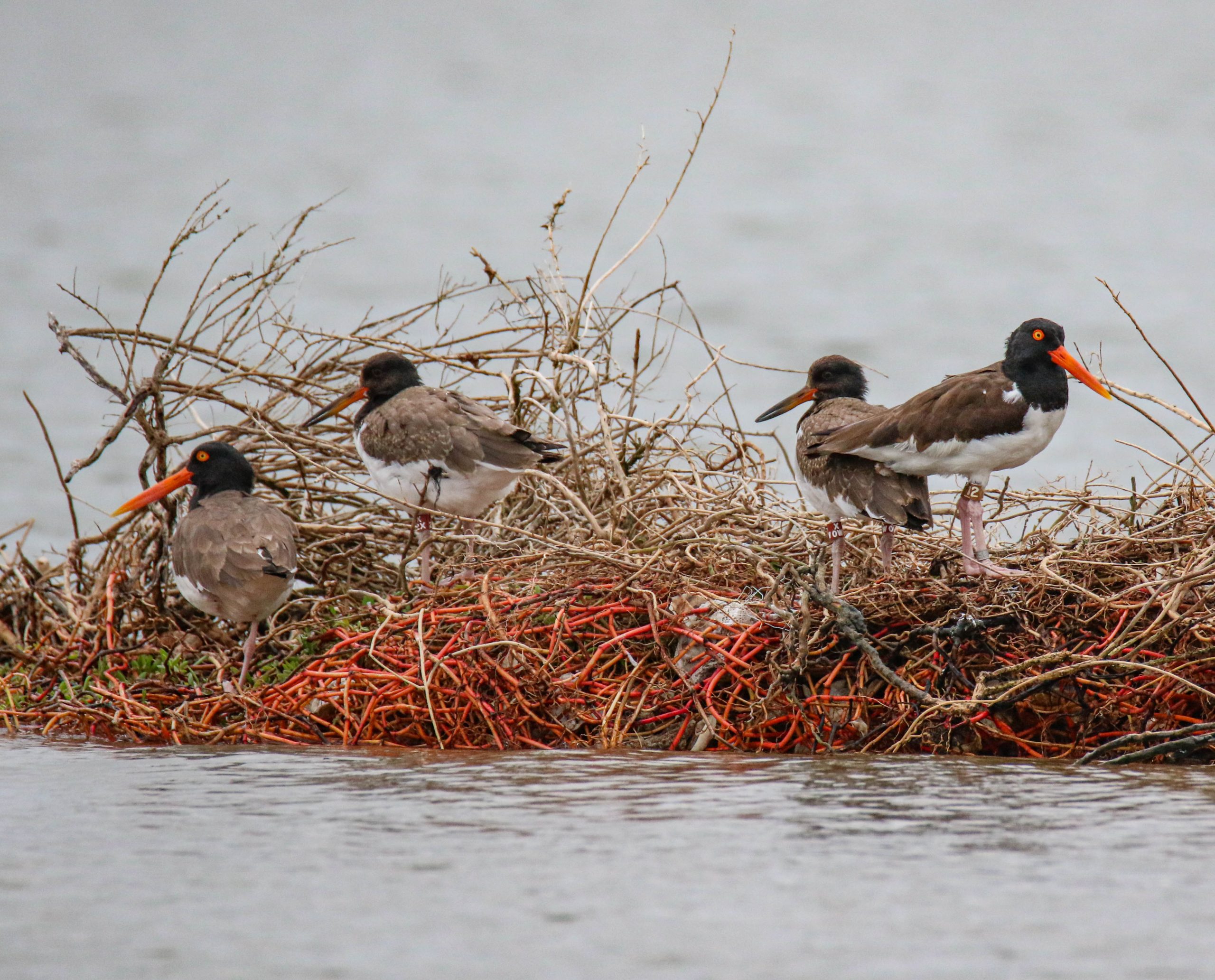 HM & X7 were on a dock but they flew out, circled us, and landed on the rock wall where they nest. Are you going to make a new nest? Let’s hope so! We didn’t see LT & JA and their chicks anywhere so they must have been off in search of food. L9 & unbanded were back on the grassy slope on Galveston Island but not in the same spot as last week so it doesn’t appear they have a nest up there thankfully.

I had decided to band the unbanded pair’s chick today even though it was a little younger than I like to band them. Tuesday is the only day I can go out next week and if the weather is bad that day then we won’t be able to get out there at all and I wanted to make sure this chick got banded. The adults were up in the vegetation so it was pretty easy to figure out where the chick was. We banded it X2W. 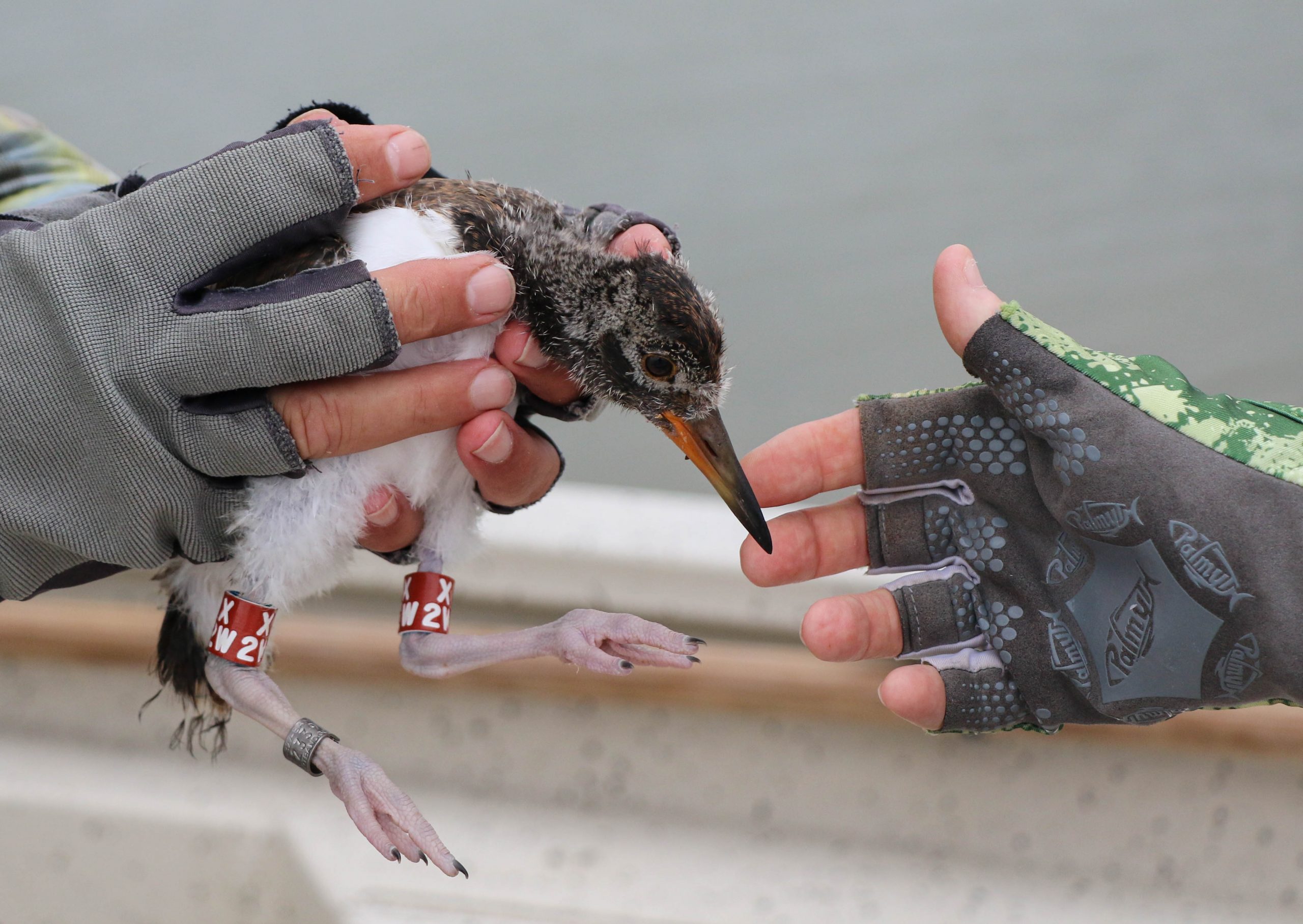 It was a feisty little thing and when I went to put it back, it tried to run. I really didn’t want it to do that because the high tide left little room and I was afraid if it got to where the Forster’s Terns are nesting they would attack it. I just kept making it lay down until it finally stayed put and I hot footed it back to the boat. The adults were at the other end of the territory and I guess since they didn’t see me put the chick back they didn’t know it was there. I was a little worried they wouldn’t find it but I shouldn’t have doubted them. Kevin (my spy who lives on Galveston Island there) emailed later that he saw them all together later in the day. Phew! Gotta keep those babies safe!

We headed over to Galveston Island and found YK feeding along the shoreline. She was most unhappy at being disturbed. 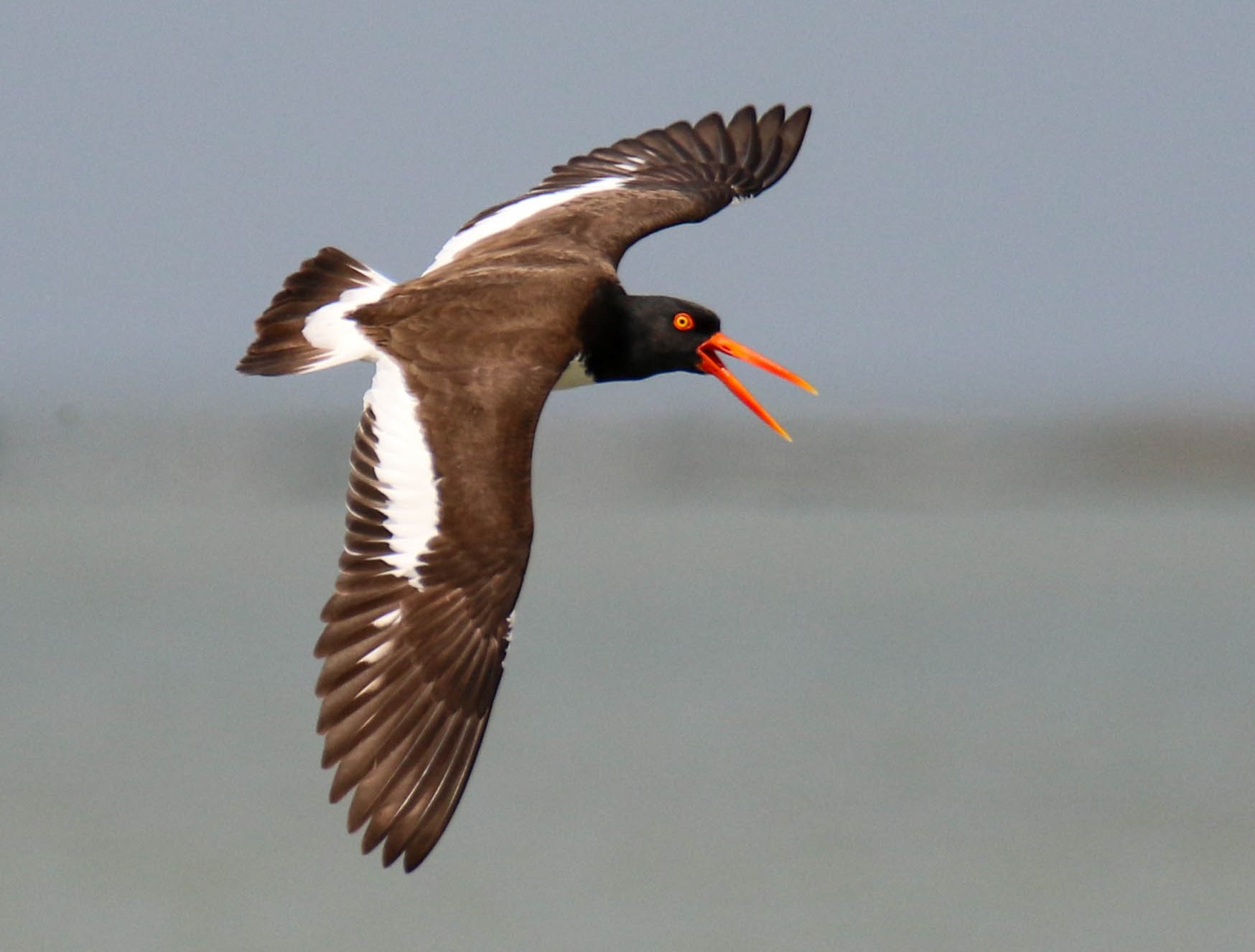 When she flew, JX appeared from somewhere to follow her but we didn’t find a new nest anywhere. 16 was in his usual spot at the end of 8 Mile Road hanging with a couple of youngsters. I’ve decided he’s just enjoying his retirement. Since I banded him as an adult, we don’t know exactly how old he is but he’s at least 12 and likely older. The normal lifespan of oystercatchers is 10-15 years so he’s earned this restful period!

We headed to South Deer and found Y7 & unbanded standing along the shoreline. No chick. Bummer. John noticed this Bufflehead hauled up on shore. 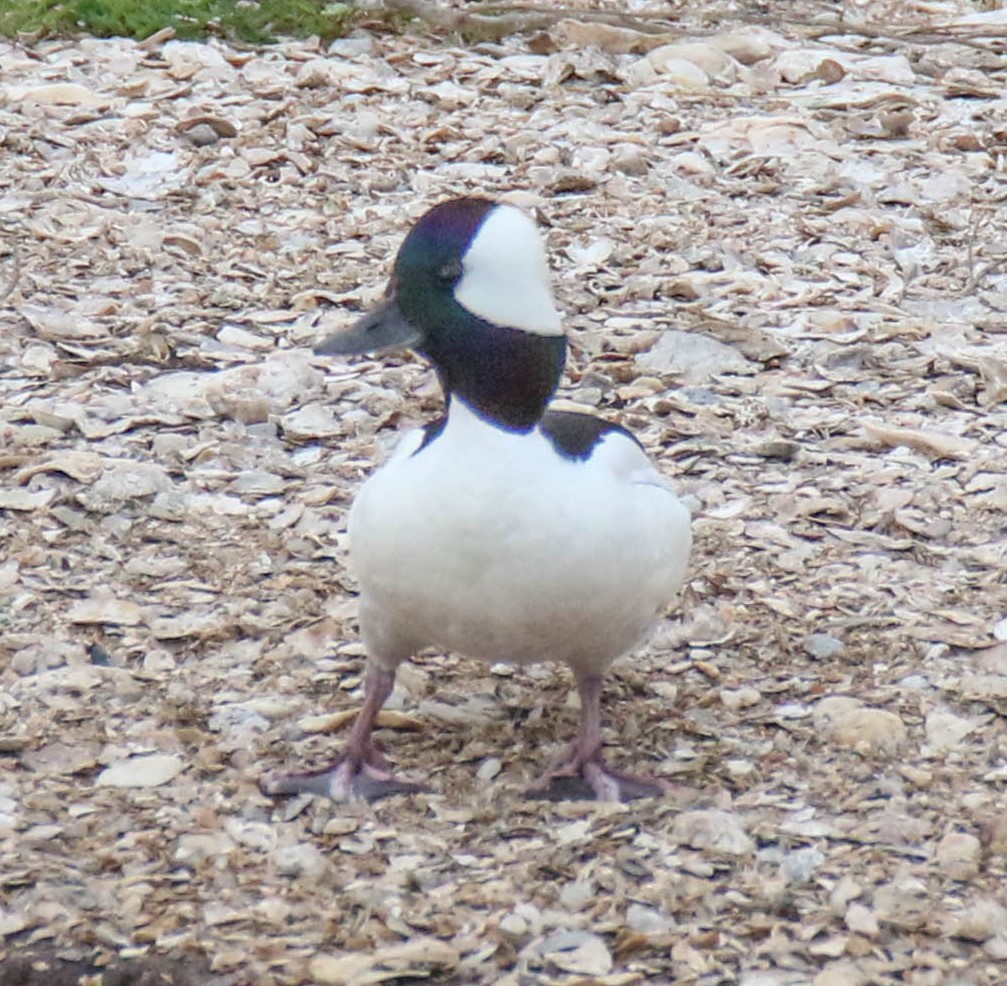 I studied Bufflehead and Ring-necked Ducks for my masters thesis and I knew this little dude was in trouble if he was up on the island. John went up to get him and he ran off into the brush so I went up too and we managed to corner him. Feisty little dude! We put him a bucket with a net over it and he rode there quite nicely the rest of the day. Good thing Bufflehead are so small. On the west end of South Deer we found F1A & E2A and both their chicks hanging out in the vegetation because of the high tide. 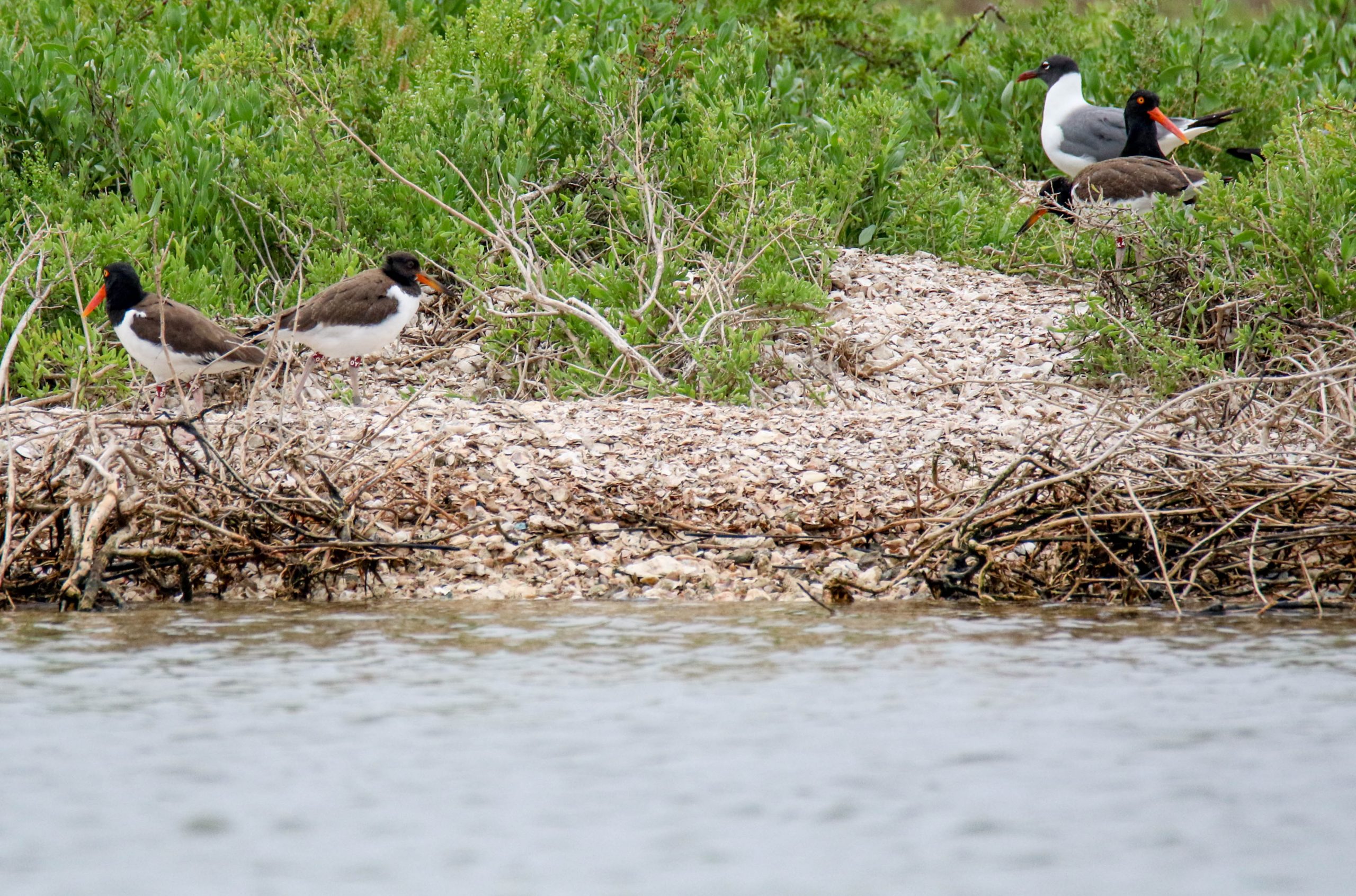 Then we went around to the other side and found A5A & unbanded back in their territory but no chicks. Caracara? I just don’t know what keeps happening to the chicks in this part of the bay. A1A & unbanded were where they were last week but they hadn’t laid a nest. Get on with it you two!

We checked the Gangs Bayou island and found A4A & unbanded also back in their territory and also without chicks. Another mystery. We headed across the bay and found F9A back on her island near Greens Cut. Perhaps she tried to entice 16 across the bay and he is unwilling to leave his cozy spot at the end of 8 Mile Road.

On North Deer we found JH back in her original territory but there was no sign of her mate YM. I hope he’s not on a nest somewhere that we didn’t look. J6 & UF were in their usual spot on the breakwater. 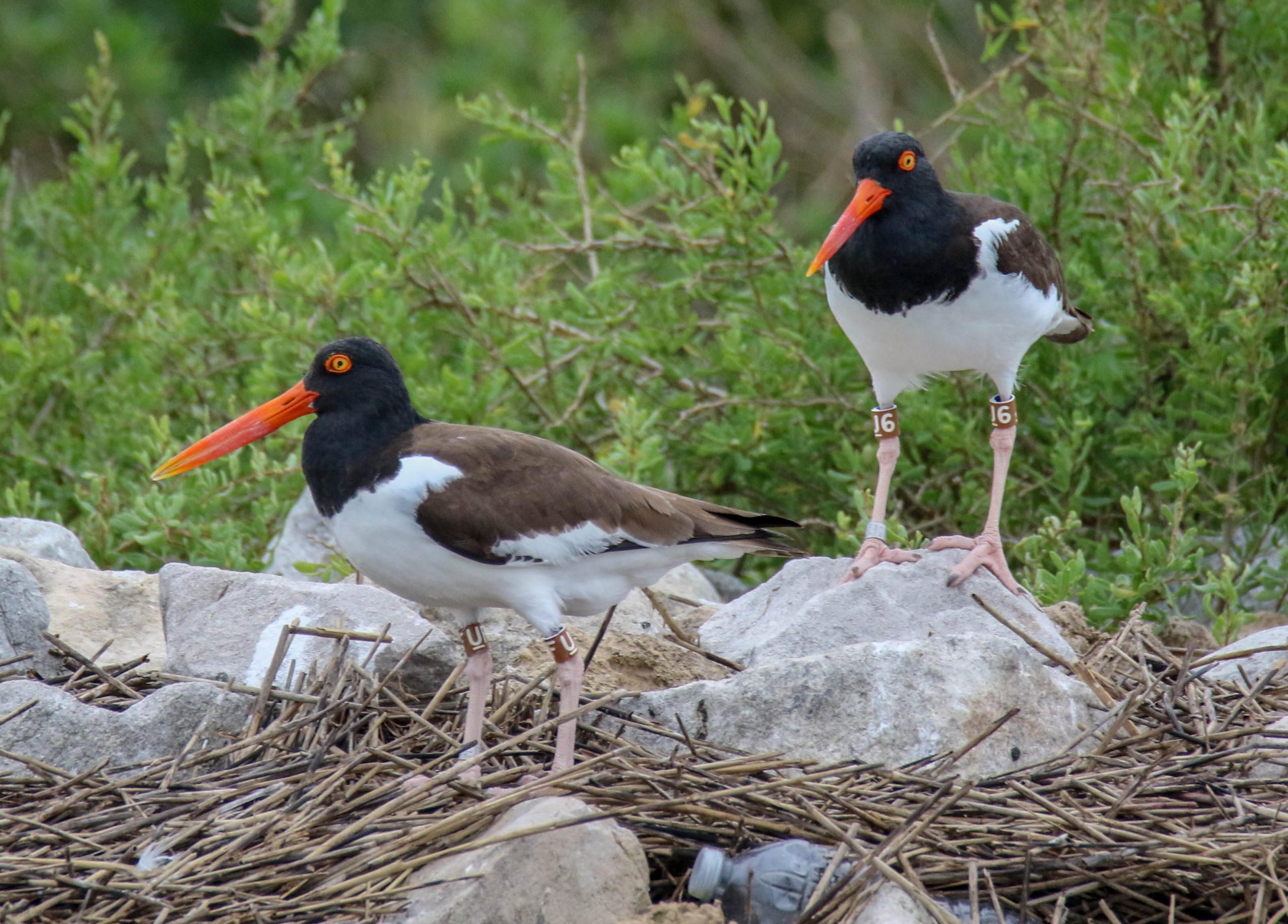 C1A & unbanded were not home but E6A & unbanded were hanging on their island with both their chicks. We had yet to see these little ones fly so we approached and just like magic they both took off! So exciting to see chicks fly for the first time. 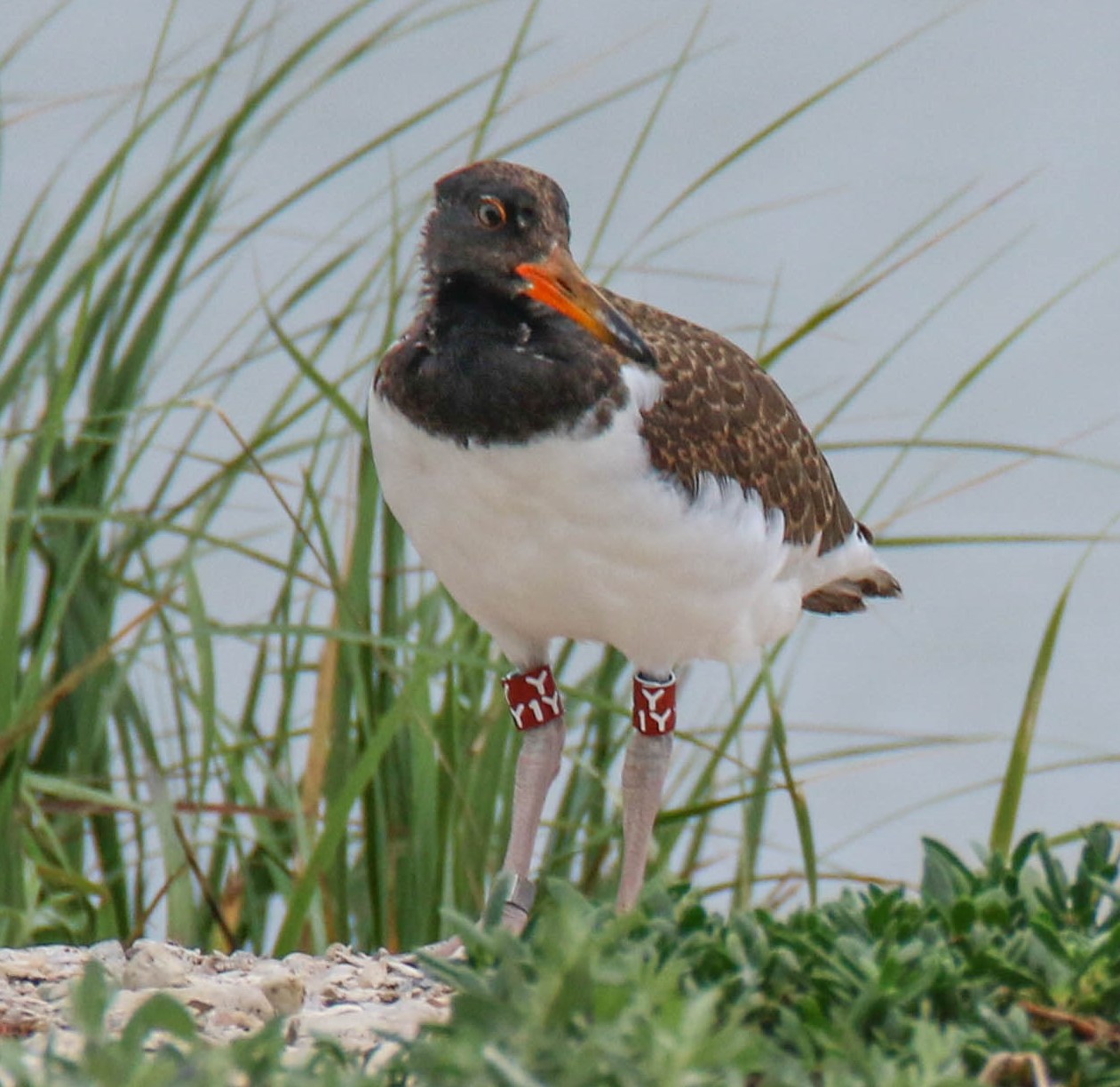 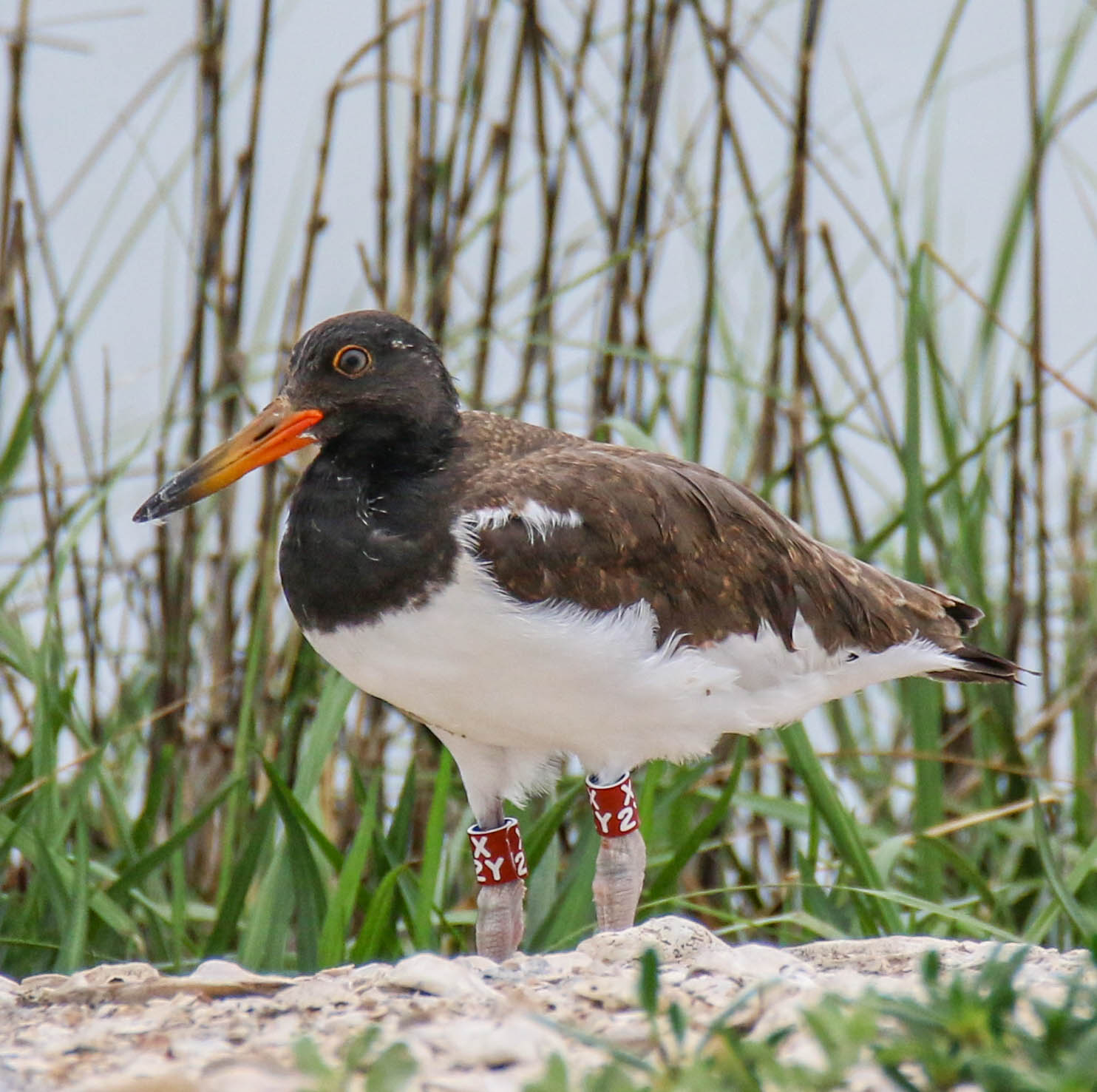 Over on Marker 52 we found P4 foraging alone again. I hope nothing happened to JJ. Perhaps he is on a nest somewhere. Next week we may have to do some sleuthing to figure that out. As expected W5 & JC’s nest had failed and they were standing along the shoreline. They had laid this nest way too low and we knew as soon as we found it that it wouldn’t make it.

We found FR & unbanded on the reef with only one of their chicks. Uh oh. I sure hope the other one was just off on a lone foray. Hopefully it will be back when we check on them next week. 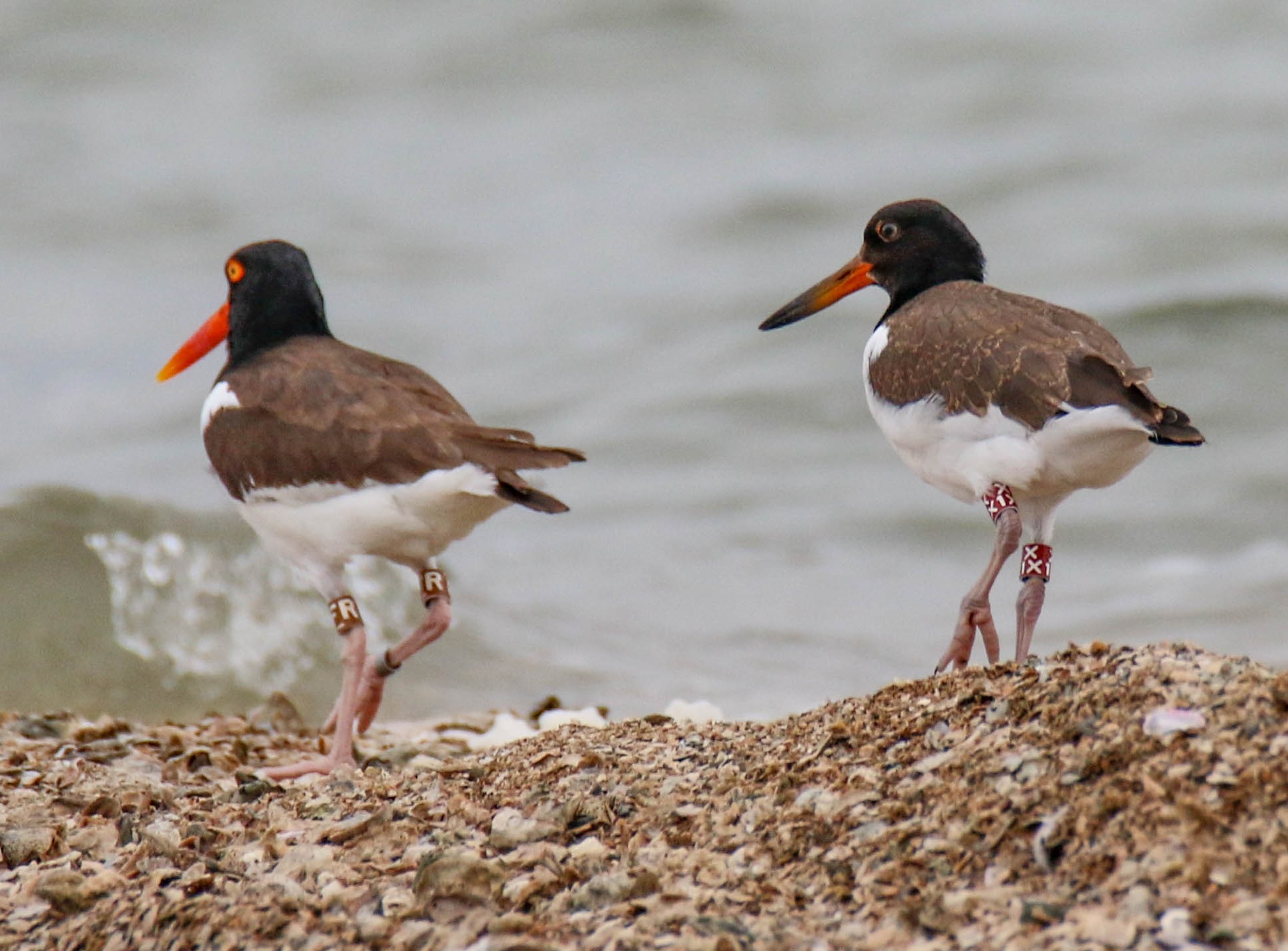 CA & Y2 were holding vigil on their island and very upset when we went to check on them so their chick must be doing ok. I decided to wait on banding that one because it’s a bit younger than the other one we banded today. Hopefully I won’t regret that decision!

E9A & unbanded were not home so that ended our day. We stopped at John’s house on the way to the boat ramp to get a box for the Bufflehead so I could transport it to the rehabber. He rode with me all the way back to GCBO and when I was done washing the boat I took him to Gulf Coast Wildlife Rescue. This is a great organization led by Dana Simon and they do great work. She checked out the duck and said it looked like he had a left shoulder injury but should recover. Yay! That made me super glad we had picked him up because he probably wouldn’t have survived out there without being able to fly.