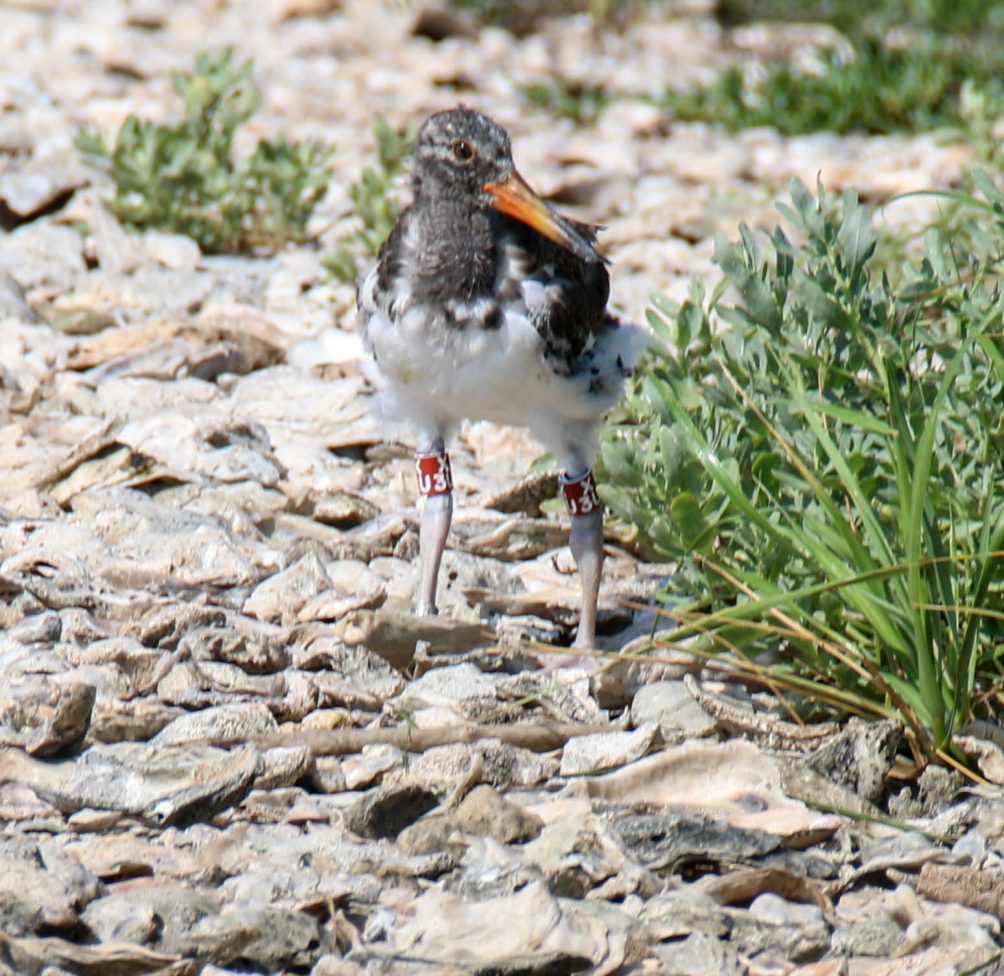 We were supposed to head out to the Brazoria Bays on Wednesday but the weather made that impossible so we rescheduled it for next week. There should be a couple hatched nests and two fledged chicks out there so I’m anxious to how they are doing but I’ll just have to wait until next week.

On Thursday, I had arranged for Amanda Hackney of Black Cat GIS to drive the boat since I still have stitches in my hand from my skin cancer surgery. Alan returned from Belize on Wednesday so he went with us as well. There was a stiff north wind but nothing we haven’t dealt with before. We headed out to Jones Bay first. FR was on his island alone this week. No wife, no kids. Last year this pair kept their chicks with them forever so I’m not sure why they are behaving differently this year.

We headed over to check on CA & Y2 whose chicks we banded last week. They were both there and we saw one chick run one way and the other chick run the other way down the island so clearly they can’t fly yet. We backed off so they wouldn’t jump in for a swim like they did when we let them go after banding. We had to go back by FR’s territory on our way to the GIWW and this time, his wife had returned but no kids. I guess they turned them loose already! Look out everyone. Teenage oystercatchers on the loose!

We motored up the length of Marker 52 and didn’t see W5 & JC anywhere but JJ & P4 had a new nest with two eggs! 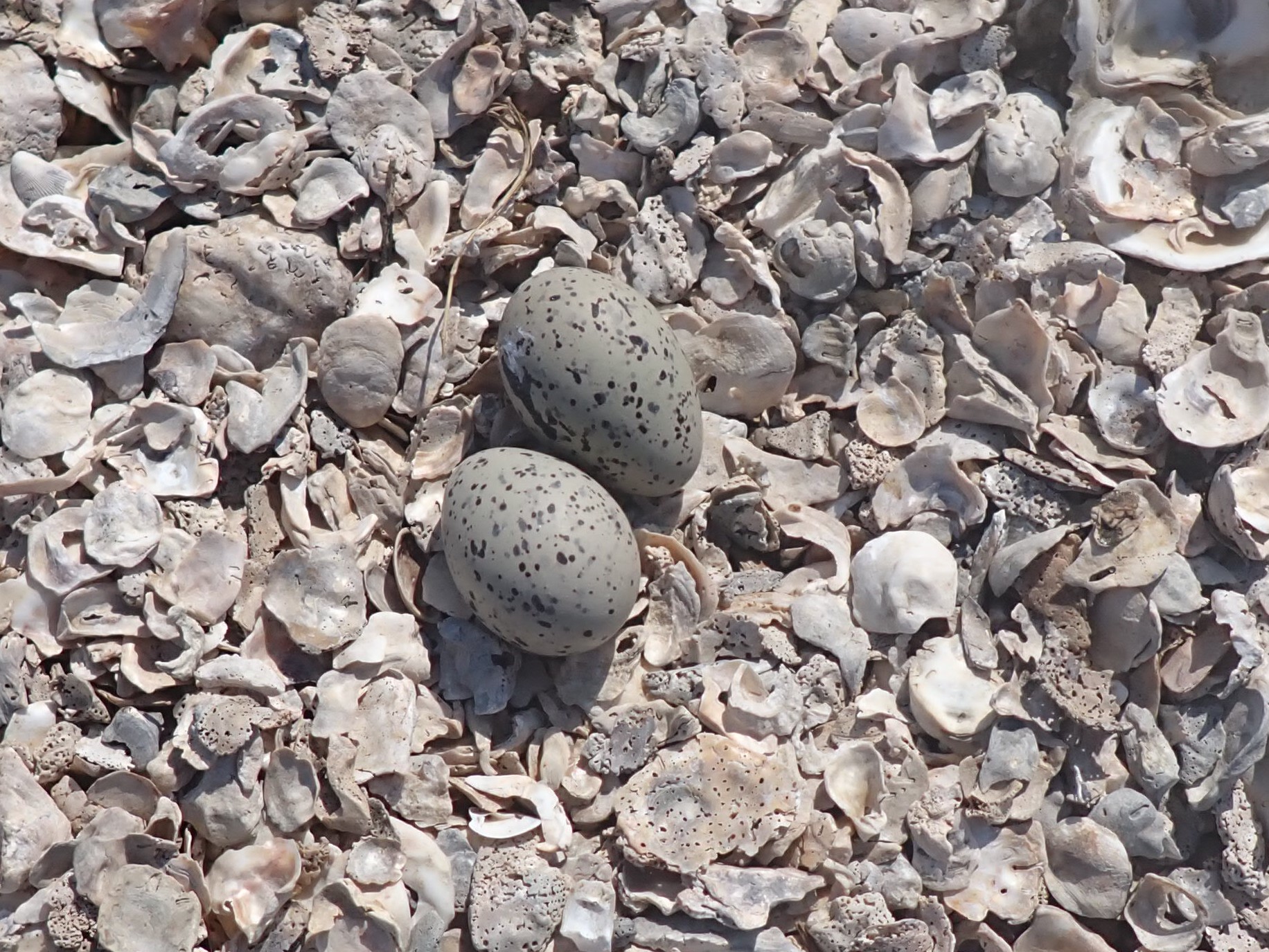 Yay! I don’t know how much chance they have with all the pelicans and gulls there but I’m glad they are giving it a go. We headed over to North Deer to check on YM & JH. Just like last week we didn’t see either of them until we moved in close and then one of them popped up out of the spartina with the chick. I was glad to see that chick was ok because it was pretty small when we banded it last week. Hopefully it will be fledged by next week. 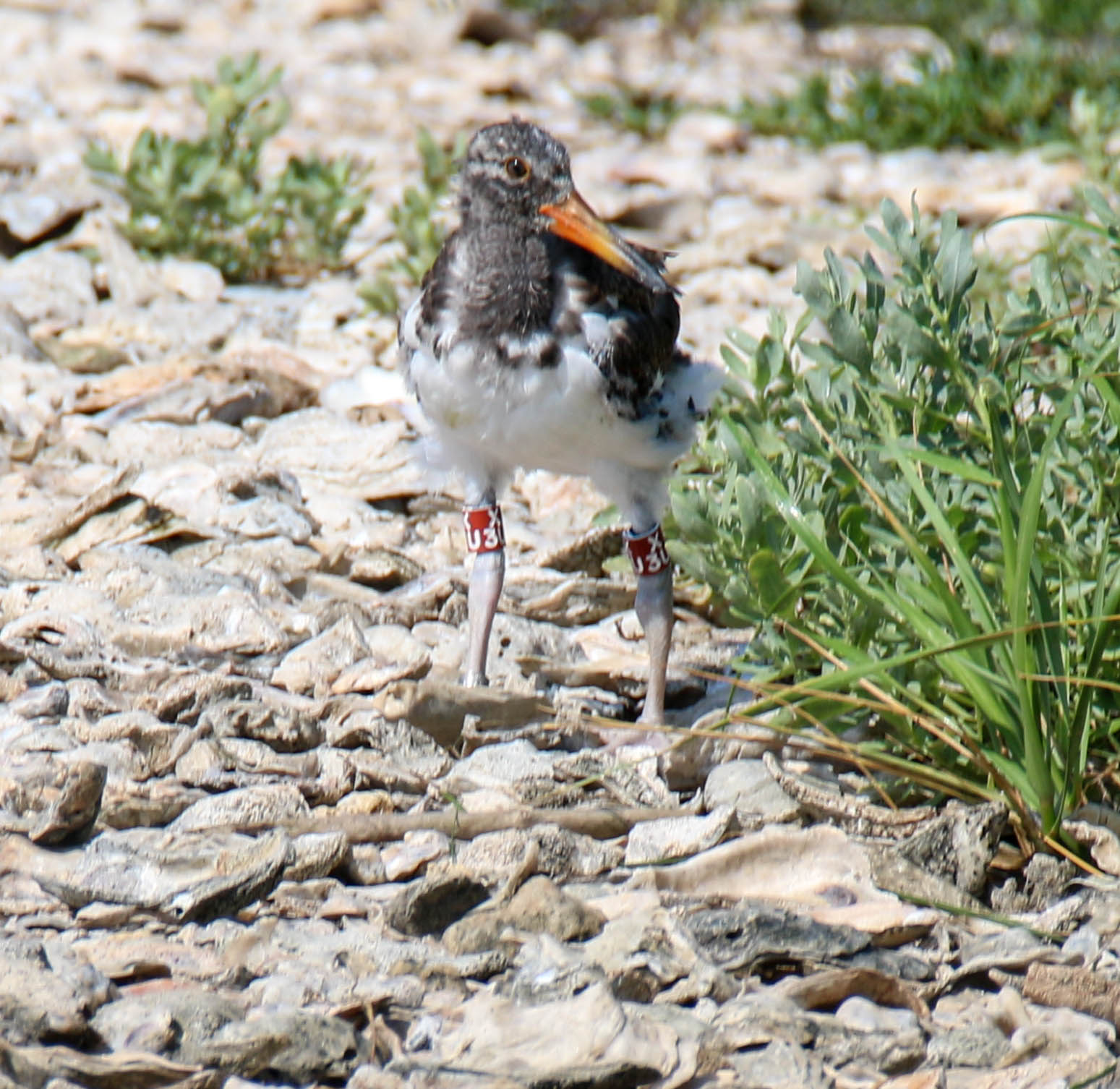 Then we told Amanda she had to sidle the boat up to the breakwater around North Deer so we could check on J6 & UF’s nest. I can’t put her response here but you can imagine! The north wind was blowing us right into the breakwater unlike normally when the south wind is blowing us away so it was a bit dicey. In addition the tide was lower than it has been so the exposed rocks were covered with algae unlike the nice clean ones I’d been walking on prior to this week. I opted to just look from the boat and fortunately I could see that there were two eggs in the nest now instead of just one like last week. Woohoo! There are a lot of gulls there but maybe they can make that work. It will certainly make a good story if they do! J6 was standing by waiting for us to leave so he could resume his incubation duties. 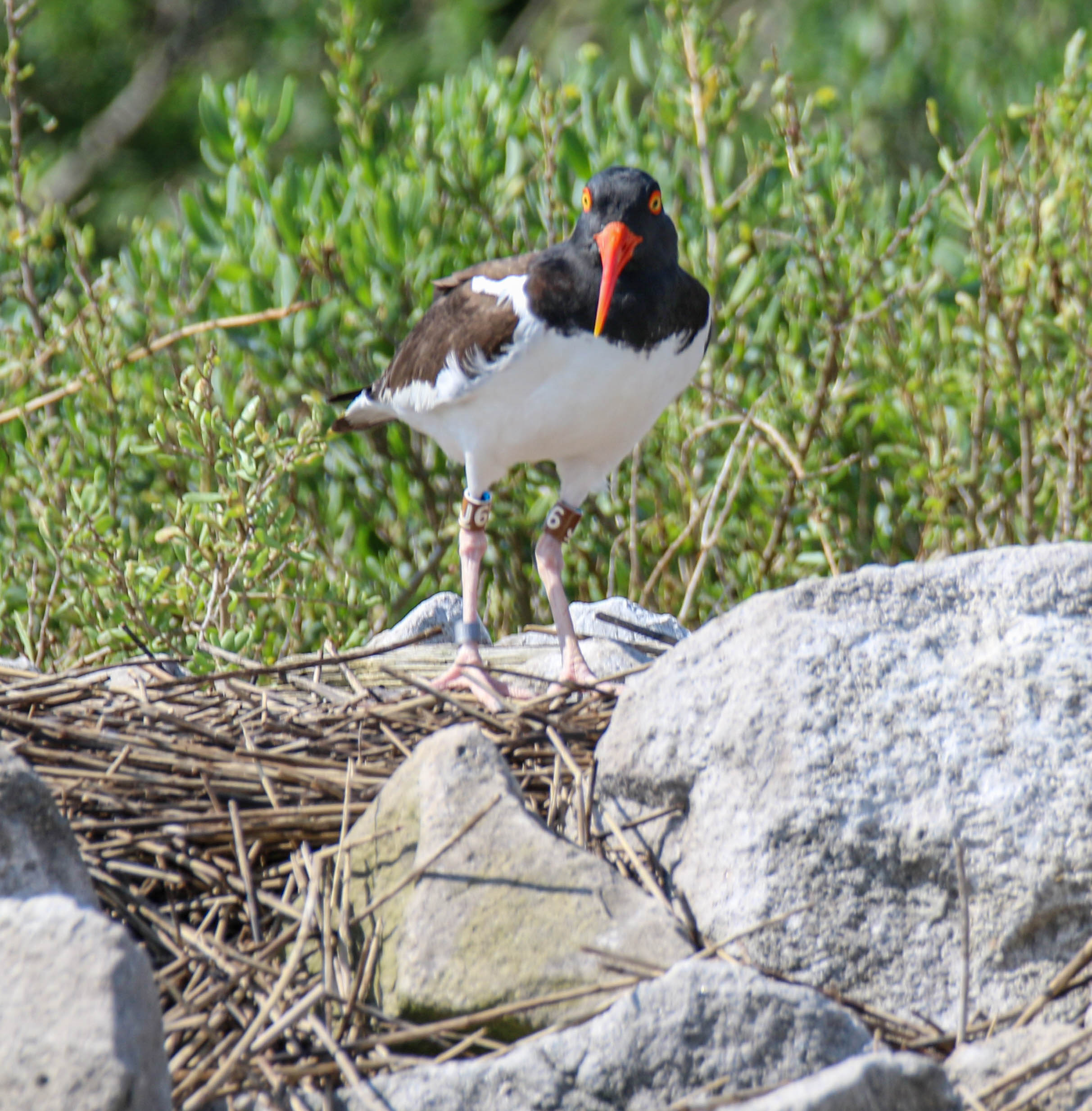 Around the corner, C1A & unbanded were standing along the shoreline and they didn’t look like they had anything going on and E6A and family were not home so we moved on to South Deer. F1A & E2A and their chicks were also not home but when we arrived at Y7 & unbanded’s territory I only saw one of them along the shoreline. And you know what that means. The other one is on a nest somewhere. Sure enough I spotted the other one just getting up from a spot up high near the vegetation. A quick check verified a new two egg nest. 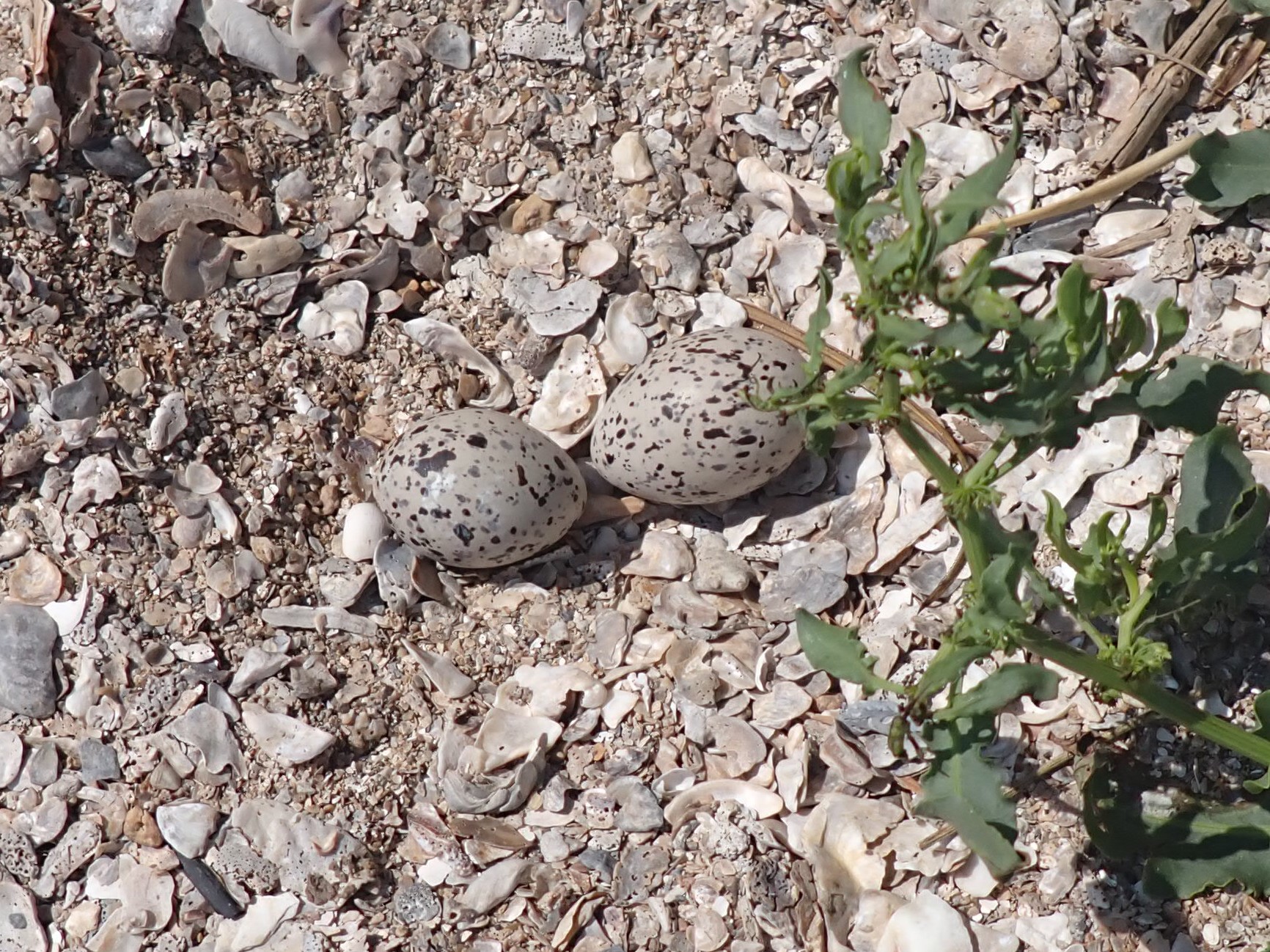 I hadn’t been entirely convinced their last nest had failed but now I knew for sure that it had. There are so many gulls there I’m not sure how they can pull this off but kudos to them for continuing to try. We moved around to the other side of the island and discovered that A5A & unbanded also had a new nest with two eggs. 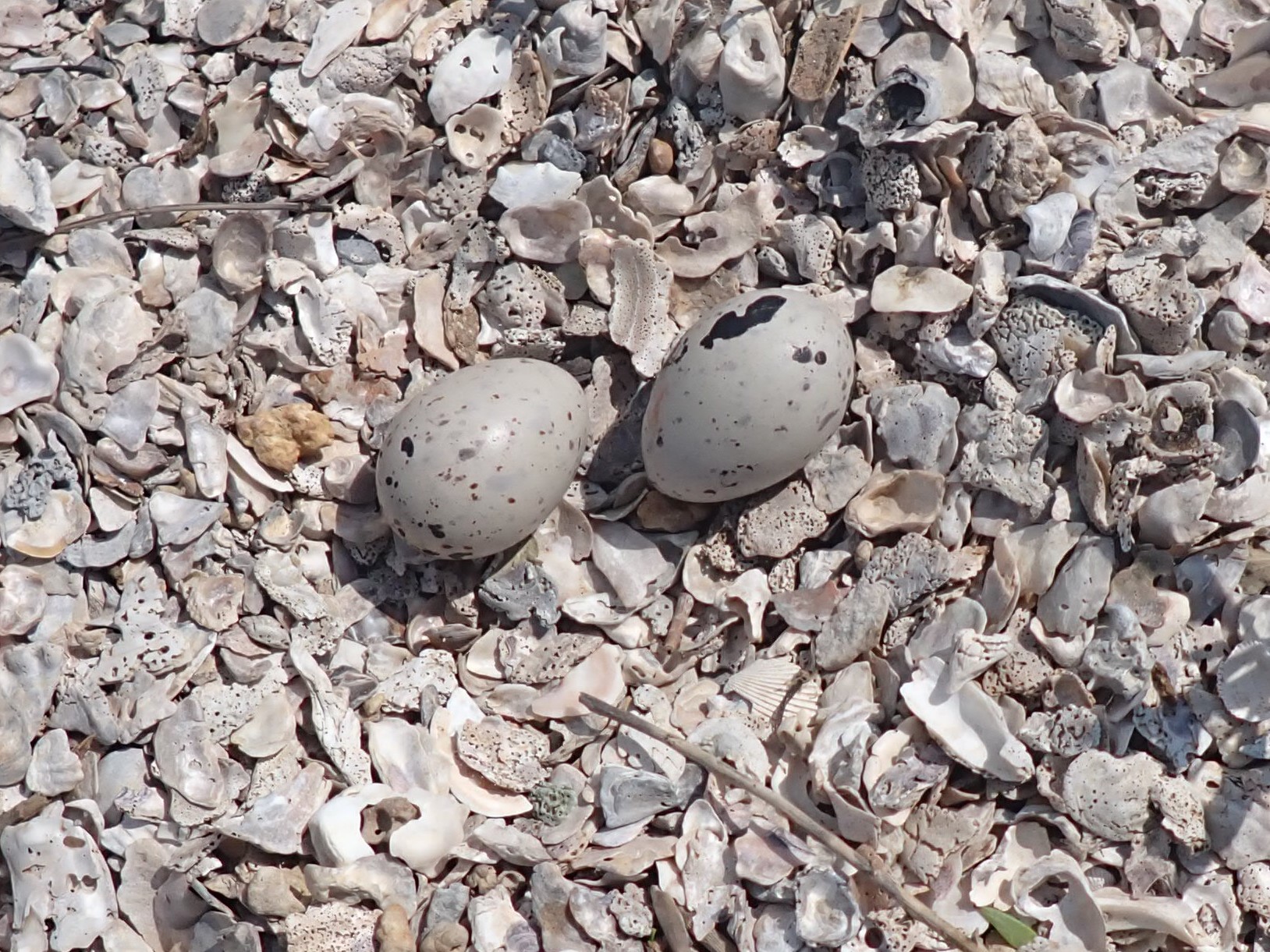 They have the same problem with gulls so raising a chick there will be a challenge. The final pair on that island is A1A & unbanded and they were still incubating their two egg nest so we left them be.

We needed to go through the cut in Confederate Reef to get over to the Sportsman Road docks so I told Amanda to head for the scary house. Hunh? I had to laugh at myself. There is one house along Sportsman Road that reminds me of the house from The Munsters TV show so I call it the scary house. It lines up perfectly with the cut in the reef so that is always my landmark but of course no one else knows what I mean. Once I explained it to her she totally got it and we made it through the cut perfectly! 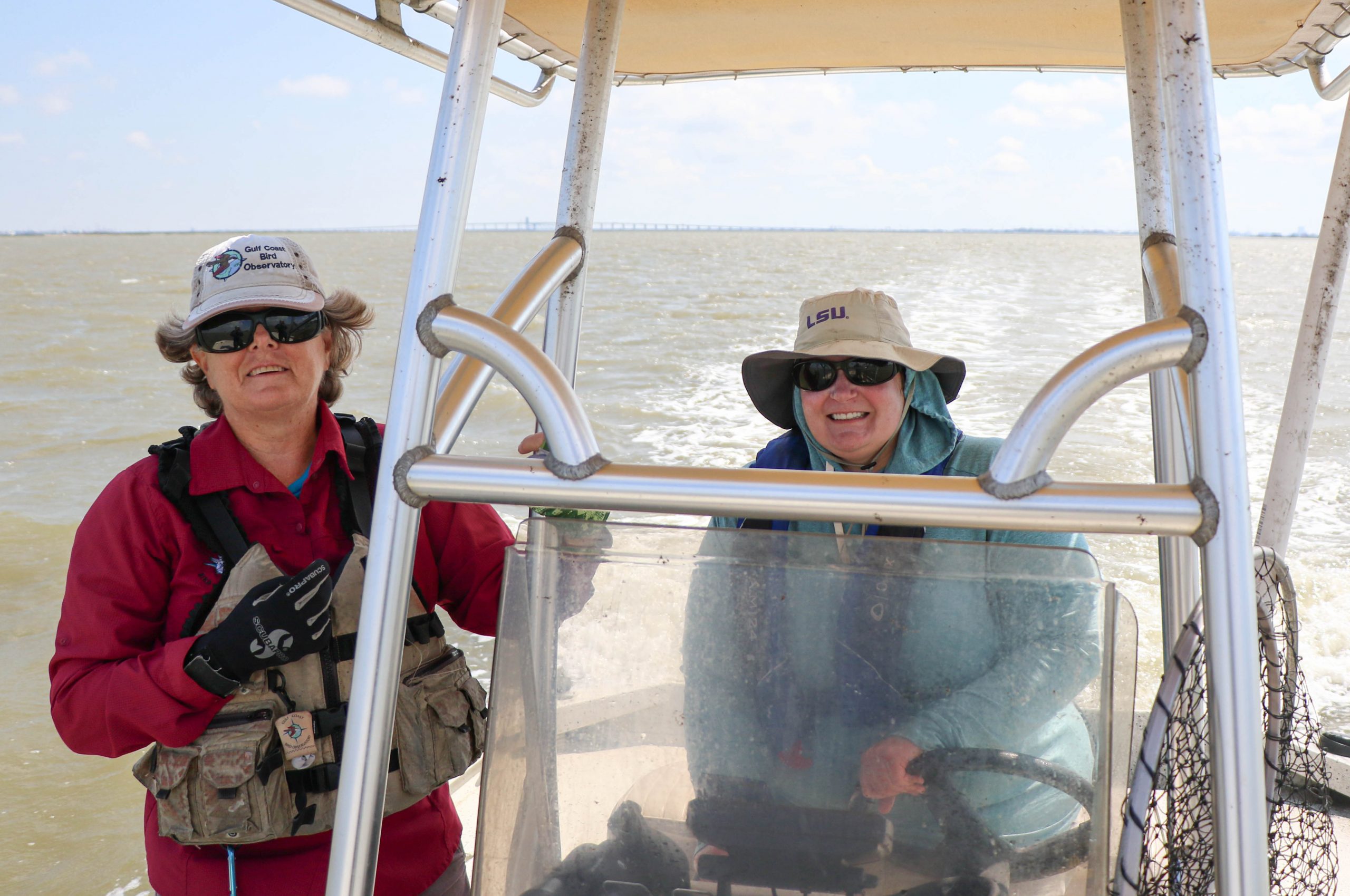 We found four youngsters on the docks and further along we found A4A & unbanded on the breakwater at Gangs Bayou so no new nest for them. They already incubated one to hatching and something happened to the chicks so you can’t blame them for taking a break.

We headed back up to 8 Mile Road and found another group of youngsters there. No sign of 16 though who’s been hanging out with them lately. We haven’t made it over to check on F9A on the other side of the bay lately and he may be over there. Next week we’ll check!

JX & YK were hanging along the Galveston Island shoreline and they got most upset when we motored by to check on them. I’m not sure why as they didn’t have a new nest. Perhaps it was just a cordial greeting but somehow I don’t think so.

On to Jigsaw where we checked YE & unbanded’s nest in the flowers and found it still only had two eggs. Somehow all the birds that are still nesting got a two egg memo because that’s what they all have! LH & T6 were still going nuts so I knew their chick must still be hanging in there. I went to look as usual but unlike the previous times, this time I found it. 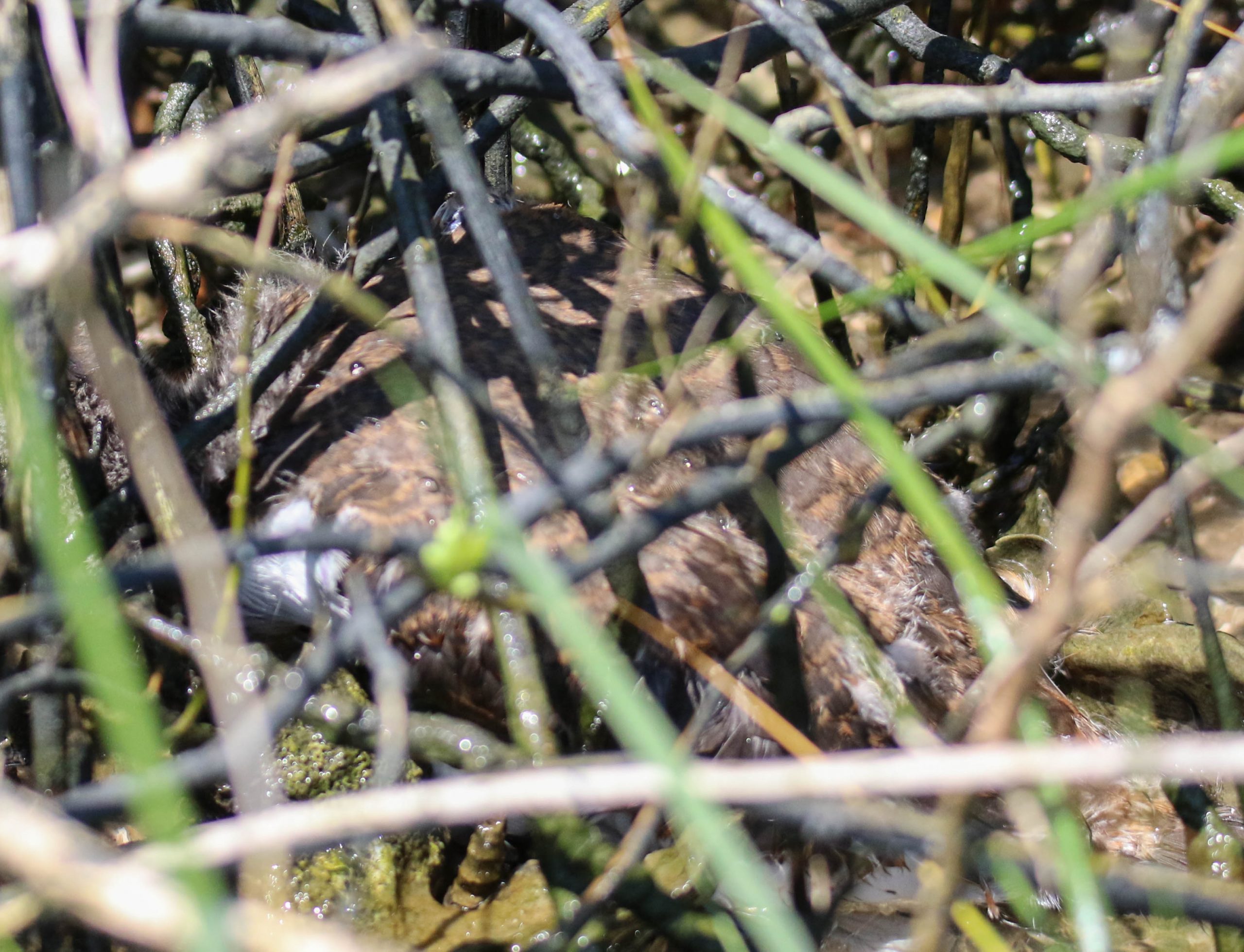 Can you see it? I had planned to wait until next week to band it but since I knew where it was, I decided to just go ahead so Alan and I walked back to the boat and surprised Amanda with it. We banded it X2U. Although it was small, it wasn’t as small as YM & JH’s chick last week. It will take another two weeks for it to fledge I’m sure.

We moved on to Struve and got a glimpse of the unbanded pair’s chick when it ran amongst the skimmers to hide. I guess it can’t fly yet. Seems like it is taking some of these chicks forever to fledge this year.

12 & unbanded and both their chicks were there and we saw one of HM & X7 fly off their nest on the rock wall when we approached to check the egg number. Last week it had two eggs and I wanted to see if they had laid another one but instead we found there was only one egg. Dang. Something already got one of the eggs! I suspect that something will come back and get the other one at some point but maybe not.

LT & JA were on a dock without their chicks. They’ve been gone for several weeks so I suspect they showed the chicks around the neighborhood and sent them on their way. Then we checked on L9 & unbanded. They were still hanging out in the grassy area on Galveston Island and one of them looked like this.

Doesn’t that look like a bird on a nest? Ugh. We pulled the boat up to a bulkhead and I went to check. No nest thankfully. It would never make it there. We motored back around the island to try to get a photo of the unbanded pair’s chick and Alan caught a shot of it running up into the skimmers.

Can you see it? The blend in well! It was too windy to go up to Swan Lake so that was the end of our day on the bay.