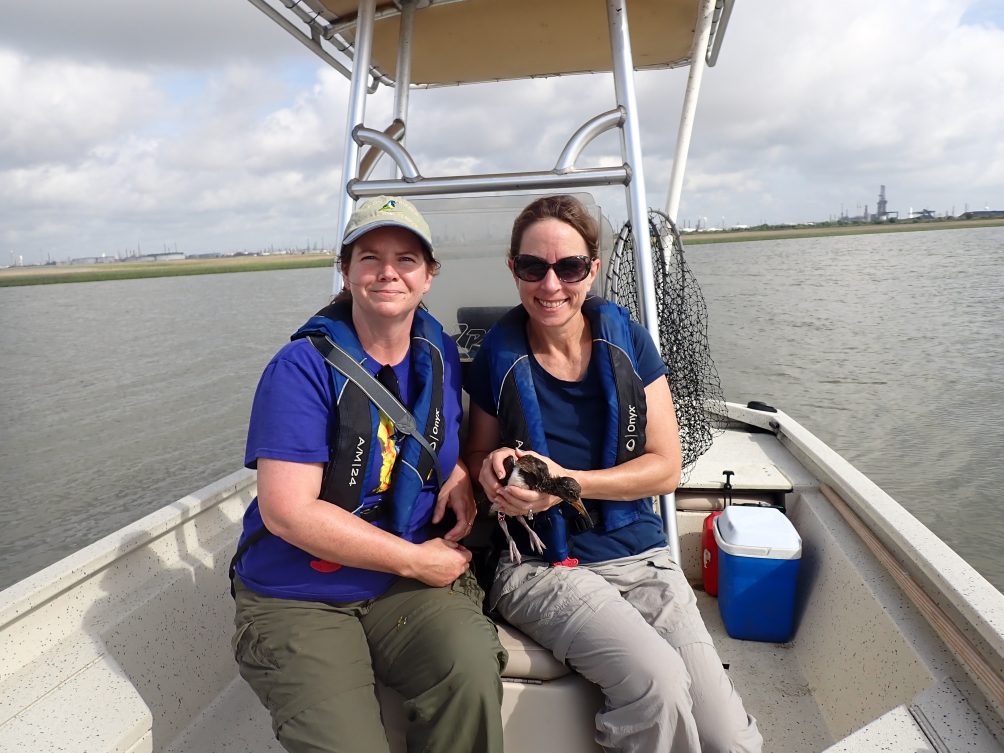 It finally stopped raining long enough on Tuesday morning for Amanda Hackney (Black Cat GIS) and I to get out to East Matagorda Bay and see what was happening. We mostly needed to count the nesting birds at the Oyster Farm and Old Gulf Cut for the annual colonial waterbird survey but of course, there’s oystercatchers out there too! At least there’s supposed to be. The tide was really high because of all the river inflow from the rain and the south wind keeping the water from escaping to the Gulf. When we got to the boat ramp we discovered that two of the boardwalk piers were under water. Fortunately there was a high one that was out of the water so we could use it to guide the boat trailer into the water. 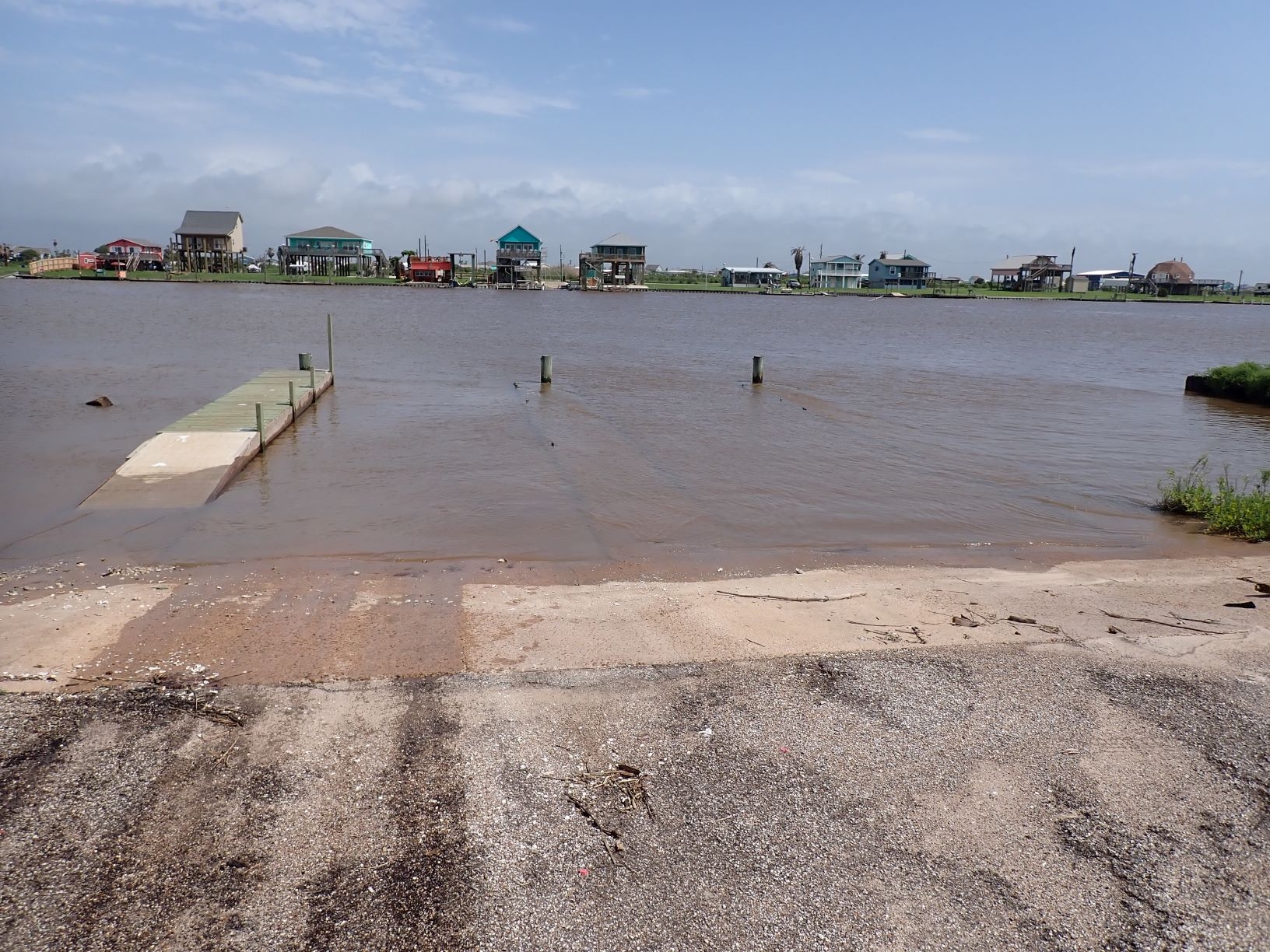 We headed out and counted some Great Blue Herons on two small islands along the GIWW in case Jennifer Wilson isn’t able to get to them. There were less than 20 herons as the islands are small but there were several youngsters so I guess they are doing ok. Not so the rest of the birds though.

When we got to the Oyster Farm, we saw that only a tiny bit of each island was above water and those bits were covered with pelicans (both brown and white). 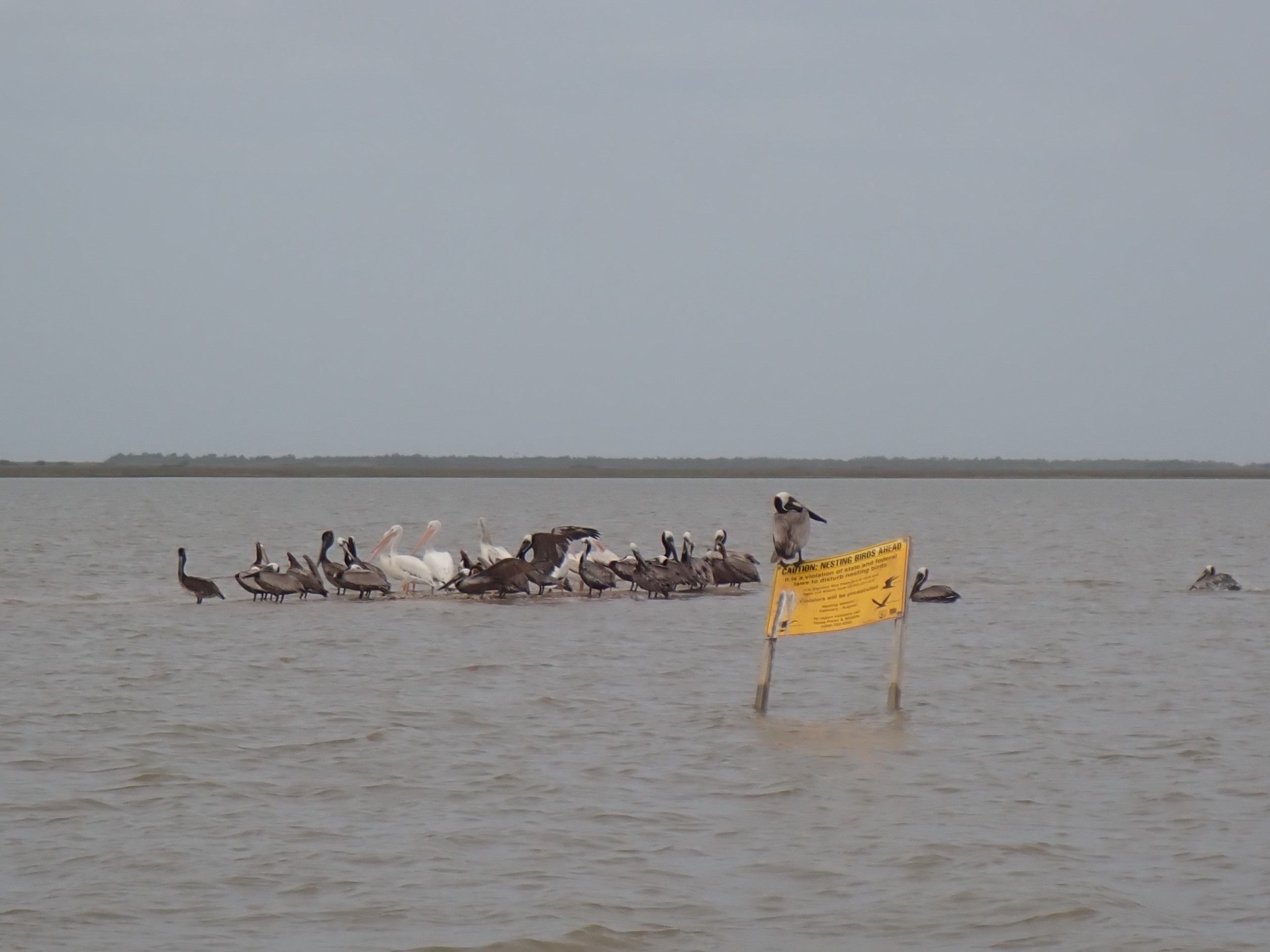 Obviously no nesting birds there and no oystercatchers either so we moved on to Old Gulf Cut. Those islands were completely under water. Here’s a photo of one of them. 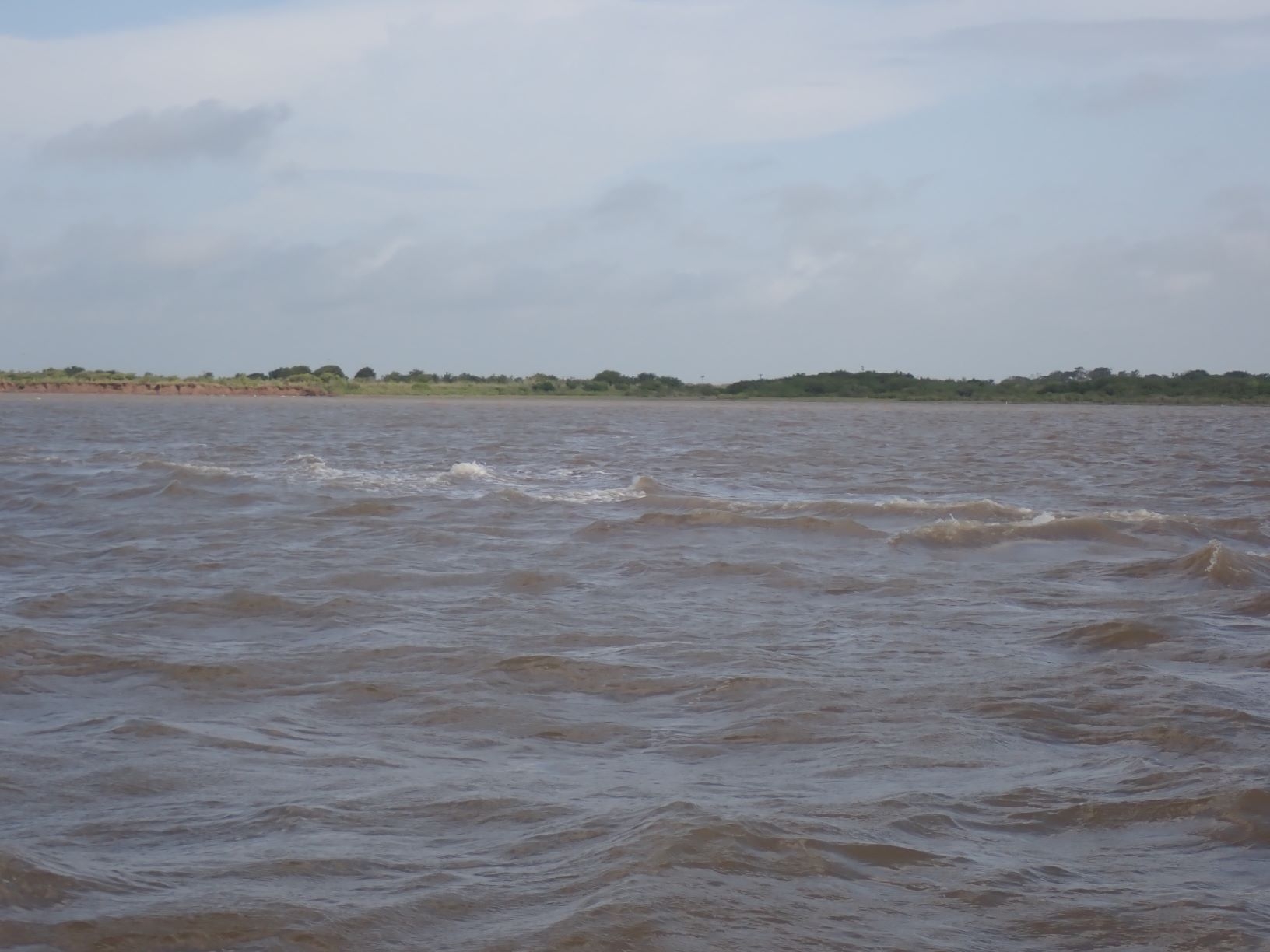 When we were last out there, a few Black Skimmers had begun to settle in but they clearly didn’t succeed if they even got around to laying eggs. I wonder if they will come back? It doesn’t take long to do a survey when there’s no birds to count! We headed back to the boat ramp.

On Thursday John Wright and I took our auction winners from last year, Michelle Bradford and Heather Lewis out to West Galveston Bay. I was quite happy to finally be able to give them this experience! Alan is still required to stay out of the sun from his skin cancer surgery but hopefully he will be able to get back out with me again next week.

We headed up towards Swan Lake and had to go under the railroad bridge with a train stopped halfway across. 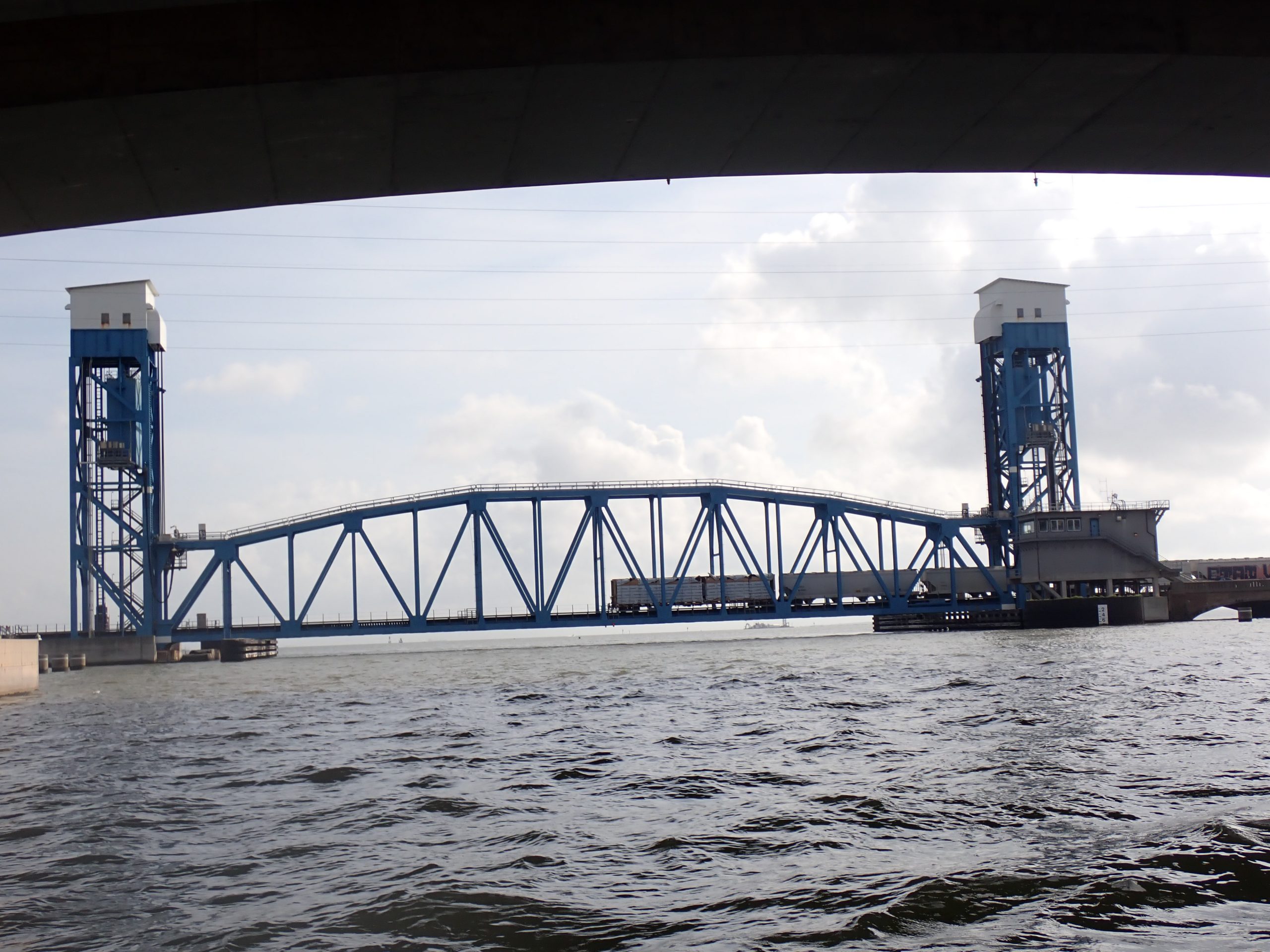 I’m sure glad we figured out we can go under that thing even when the tide is high. 20 & unbanded were on a different island from where they tried to nest but they didn’t have a new nest. Last week LR & unbanded had a small chick but this week they didn’t look like they did anymore. They didn’t act upset when we approached and they just walked down the island with no chick following them. The tide went up to four feet last Saturday which is about two feet higher than a normal high tide so I figured we might find a lot of changes today. This appeared to be the first one.

We headed into Swan Lake and didn’t find much interesting until we got to X3 & unbanded. There was a fishing boat crowding them out of their usual spot and we saw them trying to hide behind some vegetation with their chick. Yay! I was really glad to see that chick made it. We motored around behind them and the chick melted into the vegetation so I figured it couldn’t fly yet. Since I wasn’t sure what we were going to find the rest of the day and I knew exactly where this chick was, I went and got it so Michelle and Heather could see it up close. What a cutie! 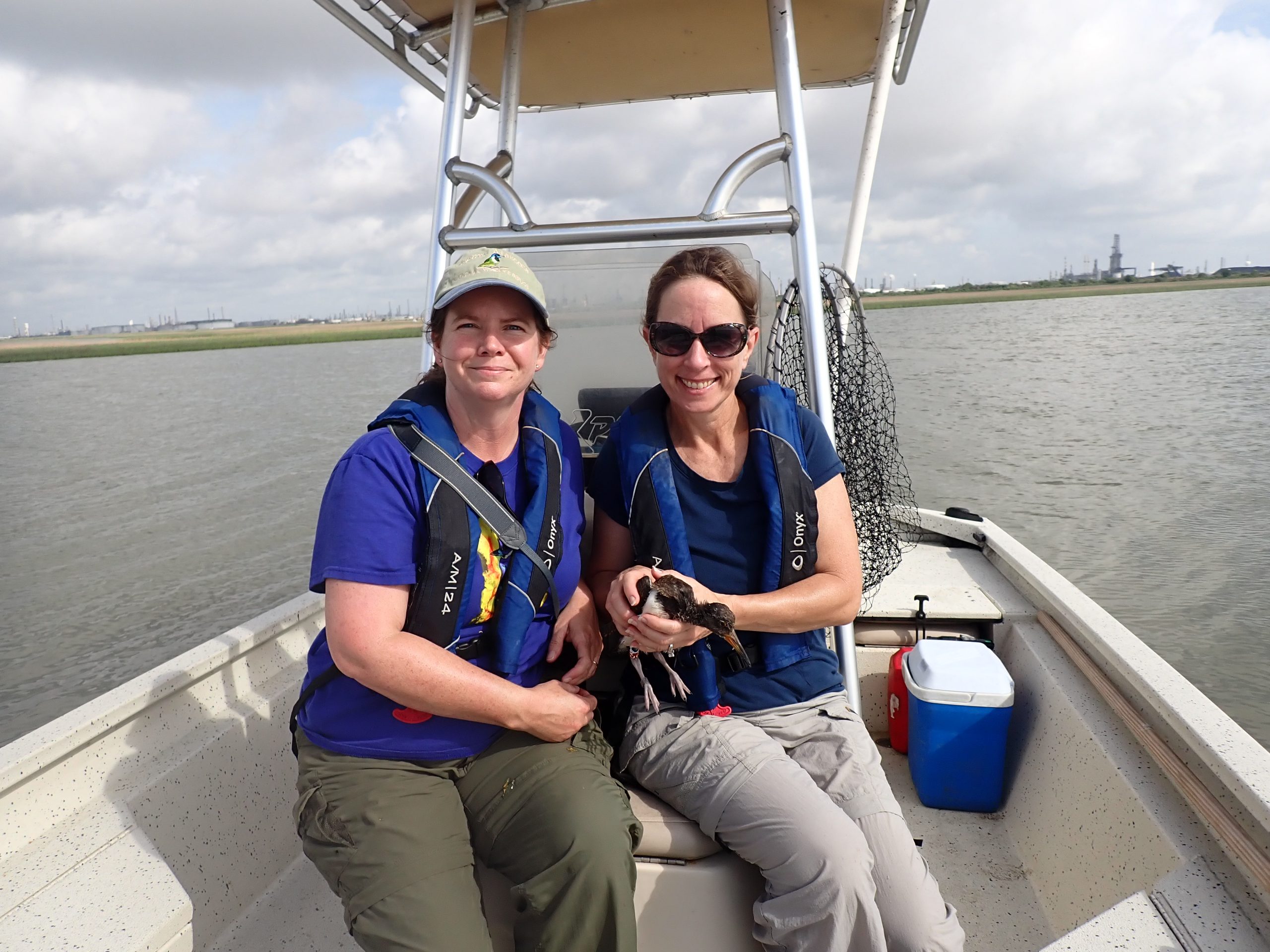 I put it back in the vegetation where it could feel safe in its hiding place and we went on our way. It should be fledged by next week. We went back to West Galveston Bay and headed to Struve Luci. The skimmers were all concentrated on the middle part of the island with almost none on the part of the island where they traditionally have nested. That part of the island has eroded significantly and I guess they aren’t liking it there anymore. The only oystercatchers that were on the island was 12 & unbanded and their chicks. HM & X7 were on the end of their rock wall but they didn’t have a new nest. We found the unbanded pair on one of the docks with their chick so we finally have some evidence that their chick can fly! Yay!

Then we saw LT & JA and both their chicks but one of their chicks was walking oddly. A study through binoculars revealed it had fishing line wrapped around both feet and hobbling the legs together. Oh no! Oh this was quite upsetting. The family was staying together but that chick was having a hard time keeping up. We didn’t have any way to catch it but John and Alan had bought a C02 gun like the one I have so we decided to finish the survey and then come back and try to catch it. 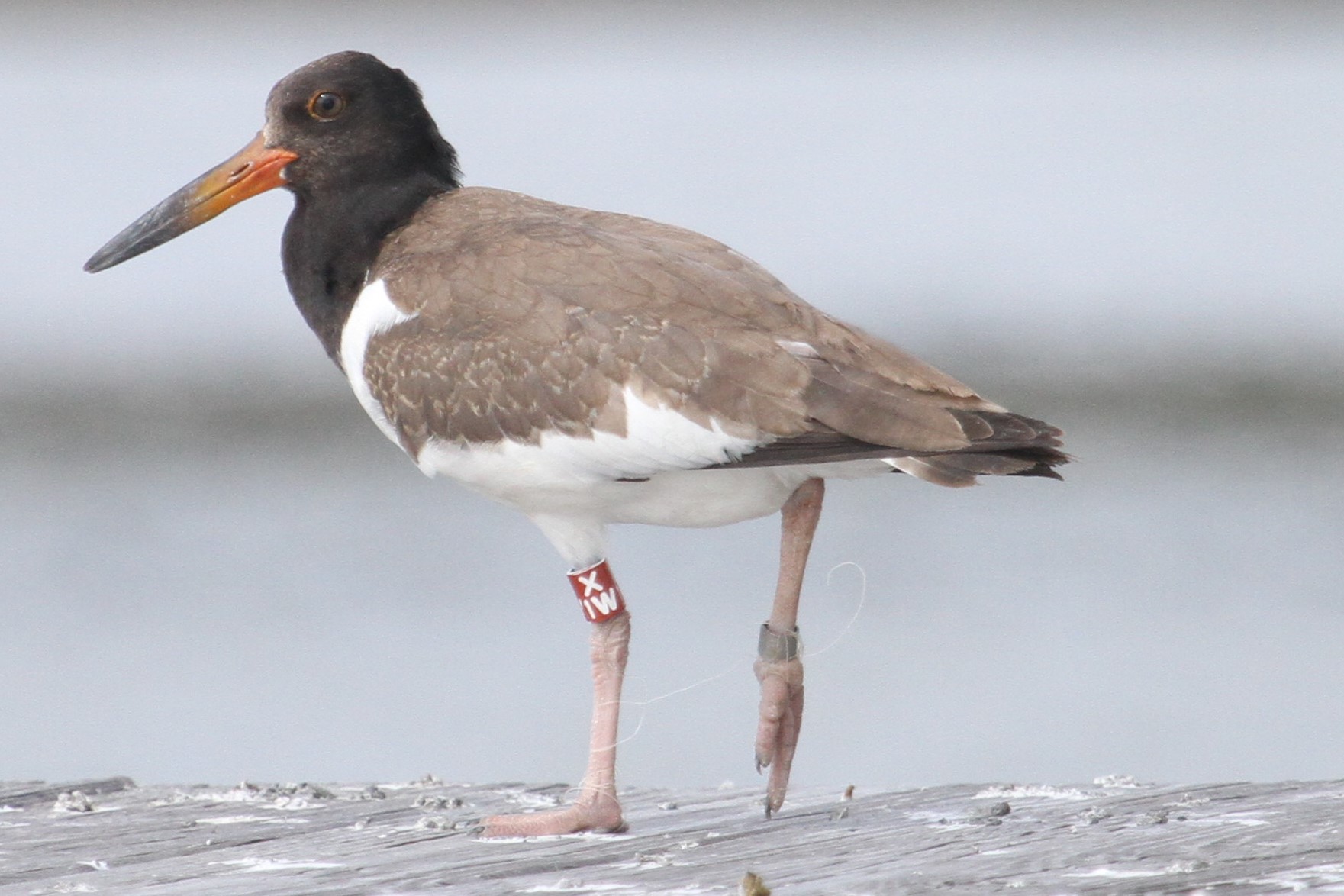 I was quite upset by that find and then we moved on to Jigsaw and had another one. I was prepared for this one though. If you remember from last week, we found T6 dead and her mate LH still protecting their chick but the chick had lost weight from when we banded it the week before. I wasn’t sure what was going to happen but was encouraged the LH was still protecting the chick. This week LH was with a banded adult which turned out to be JX. I had thought JX was a male but clearly that is not the case.

We’ve been watching JX try to find a spot to nest for several years and this year she had settled along the shore of Galveston Island with YK but that spot is rife with predators and they were not able to successfully nest. Now it appears JX has found a home on Jigsaw with LH. It took less than two weeks for LH to get a new mate. That is not unusual. I often wonder how many adult birds are out there waiting for their chance to join the breeding population but unable to because there isn’t enough nesting habitat.

LH & JX seemed quite cozy together but there was no sign of the chick so we went up to look around and we found it laying dead only a few feet away from the body of its mother. So sad. We’ll never know if it starved or if JX did it in because it wasn’t her chick. Things are rough in the oystercatcher world. 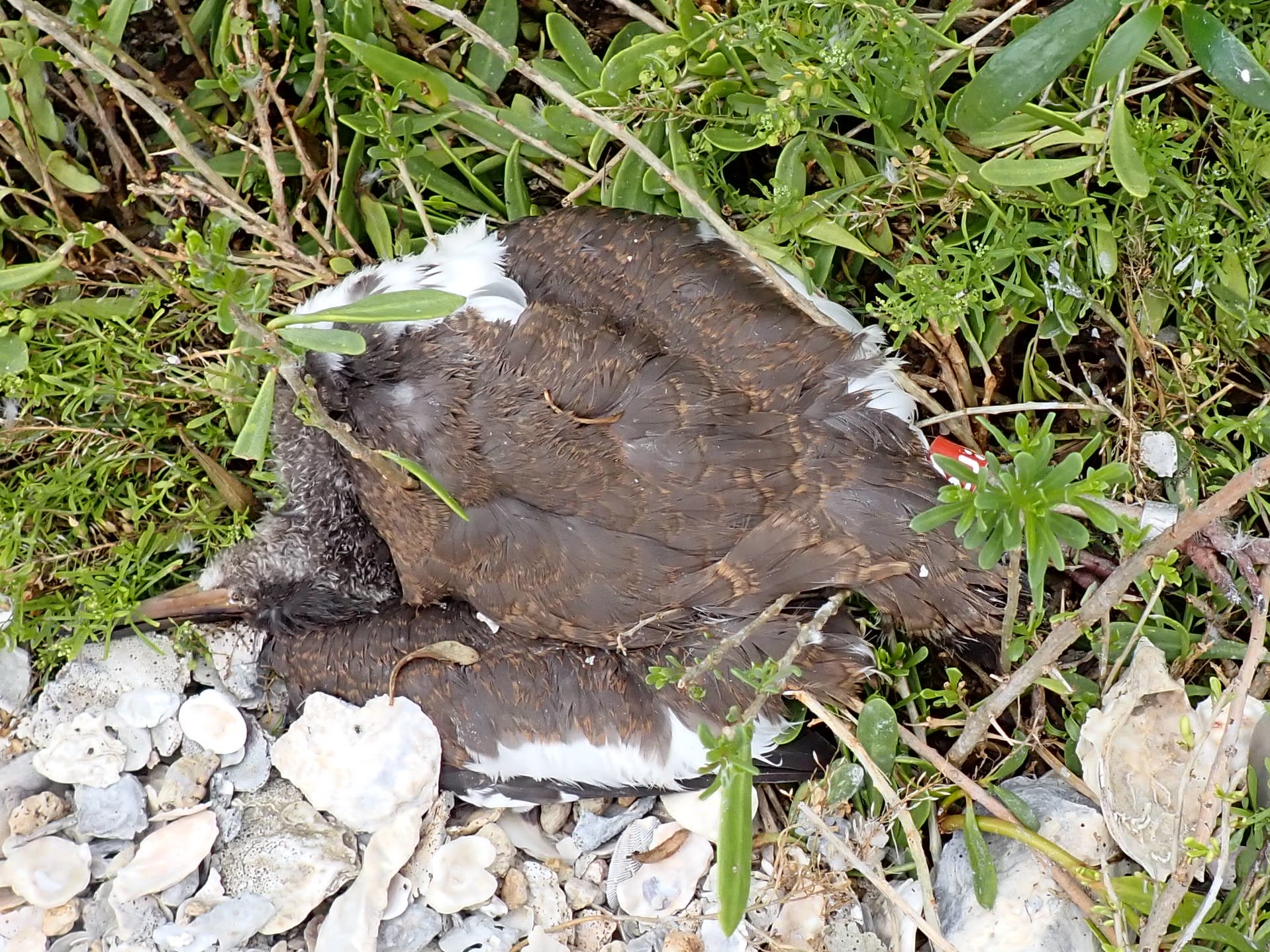 Next door YE & unbanded’s nest had clearly overwashed in the high tide. Here’s what the spot looked like where their nest was. 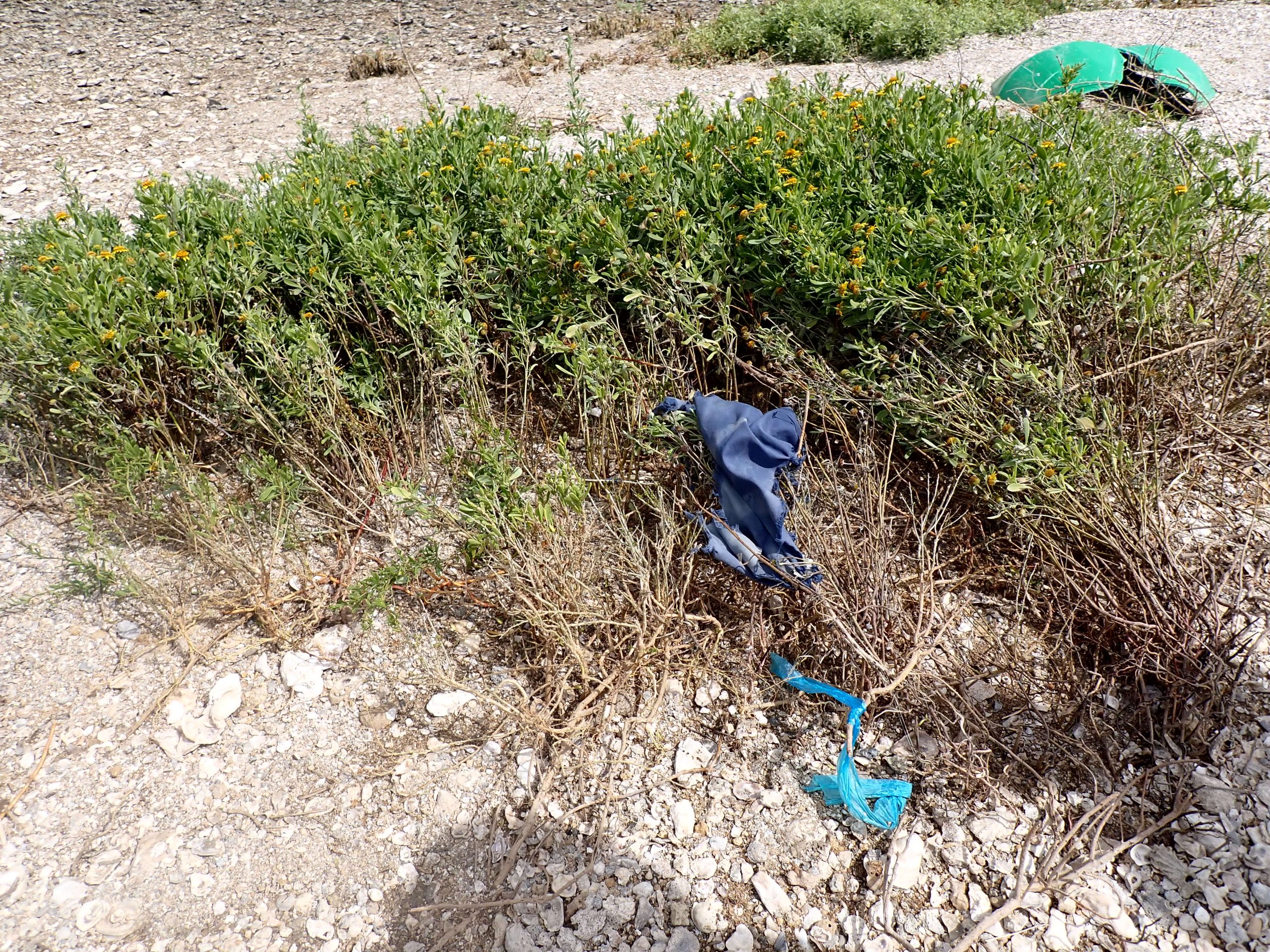 So many negatives! We moved on to the shoreline of Galveston where we found YK (JX’s former mate) already with an unbanded bird that had filled JX’s spot. It doesn’t take long for an open spot in the breeding population to be filled. At the end of 8 Mile Road there were four birds. One of them just would not stand up no matter what I did so we couldn’t see its legs. I bet it was 16! That old rascal is getting cantankerous. We found a few more youngsters along the docks and moved on to Gangs Bayou. A4A & unbanded were standing on their island but they hadn’t laid a new nest. We went back to South Deer and found all the nests there had overwashed. Dang it! I knew it would be devastation after that high tide but its still hard to see it.

The Royal Terns seemed to be doing ok though and they had some very cute chicks. 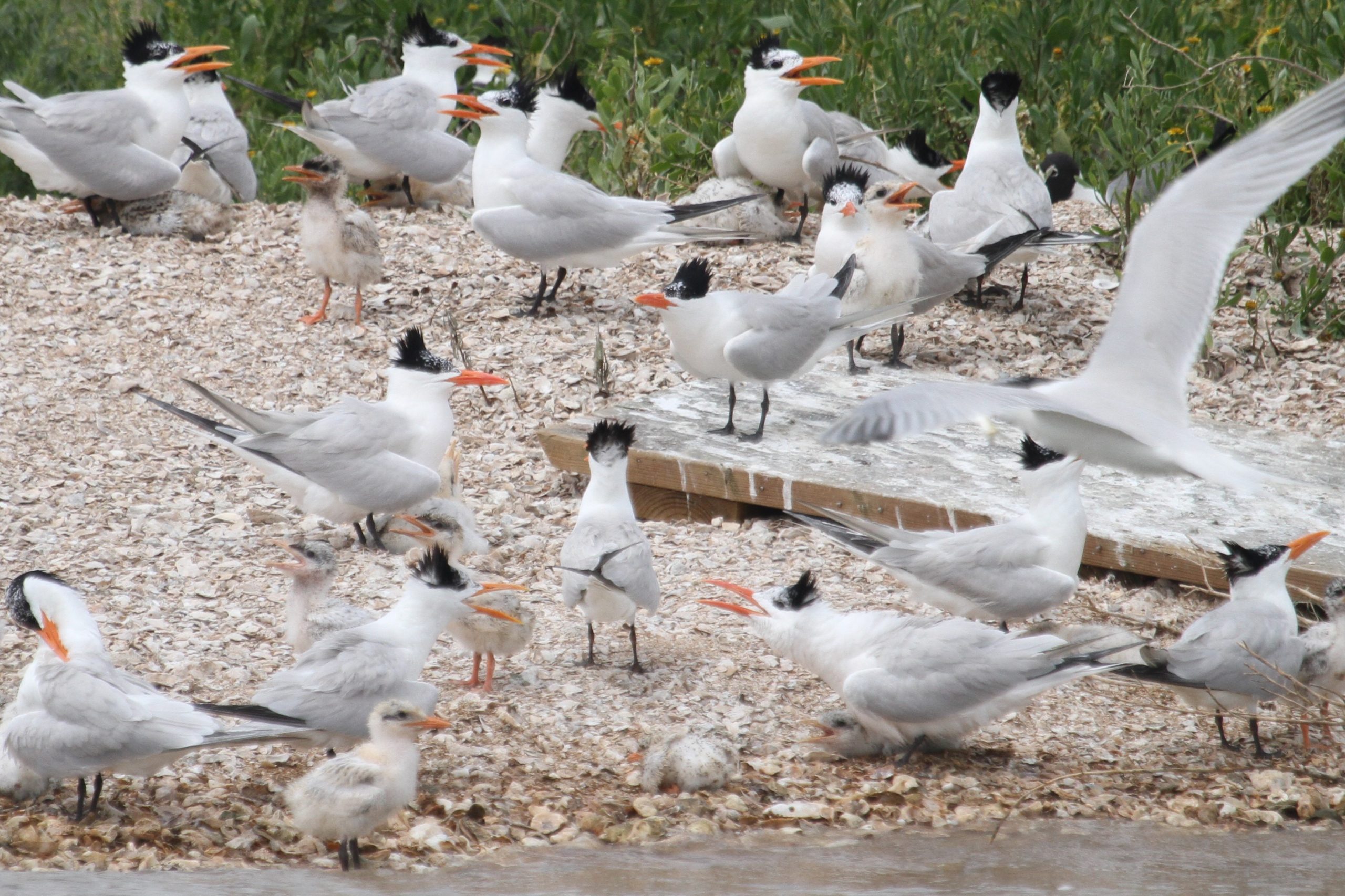 We moved over to North Deer and found YM & JH with their chick X3U. It still didn’t look like it could fly but when we approached it made a short flight into the vegetation so it’s getting there! 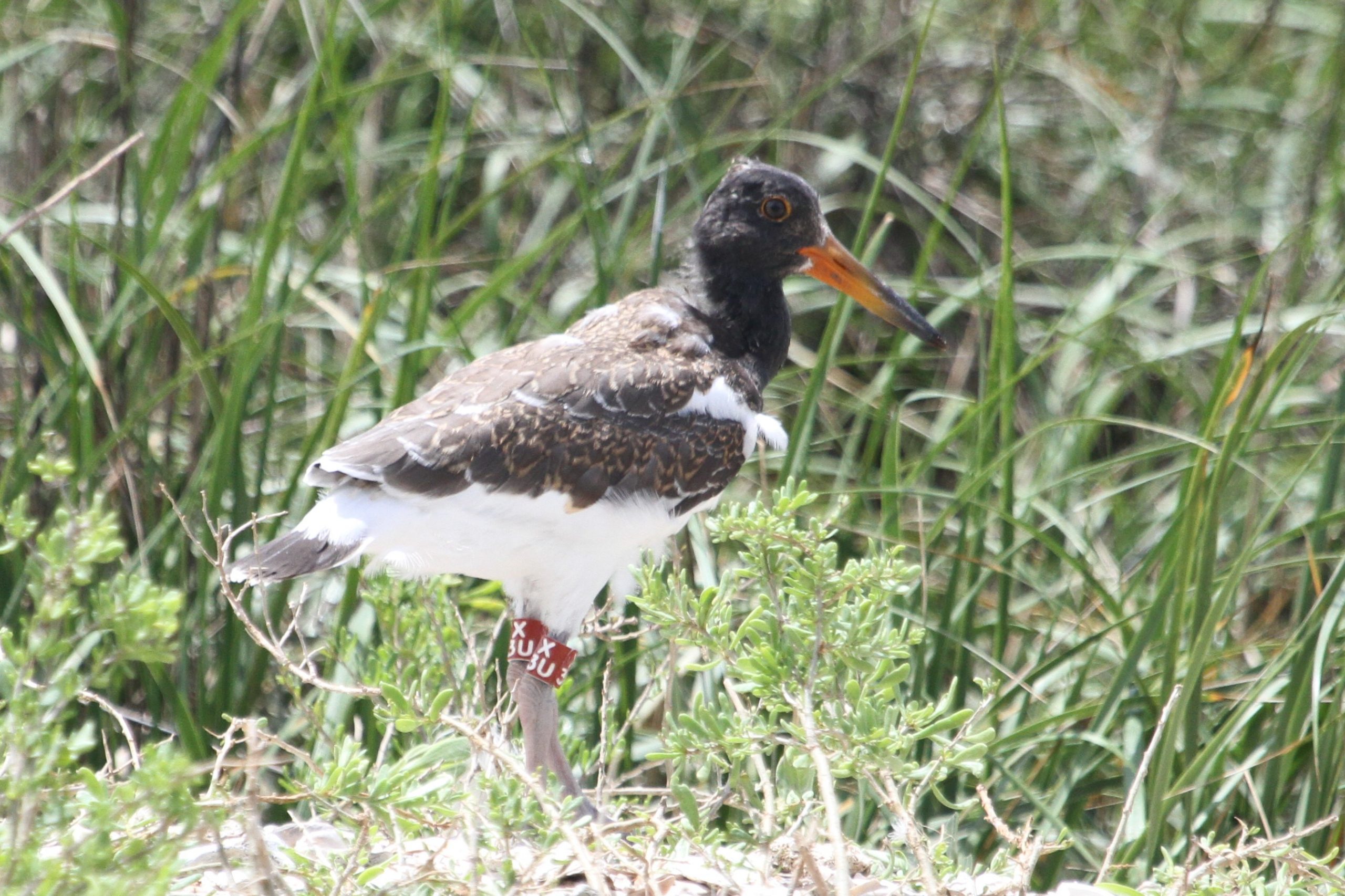 This fine looking frigatebird was perched on a pole and let us get quite close without spooking. 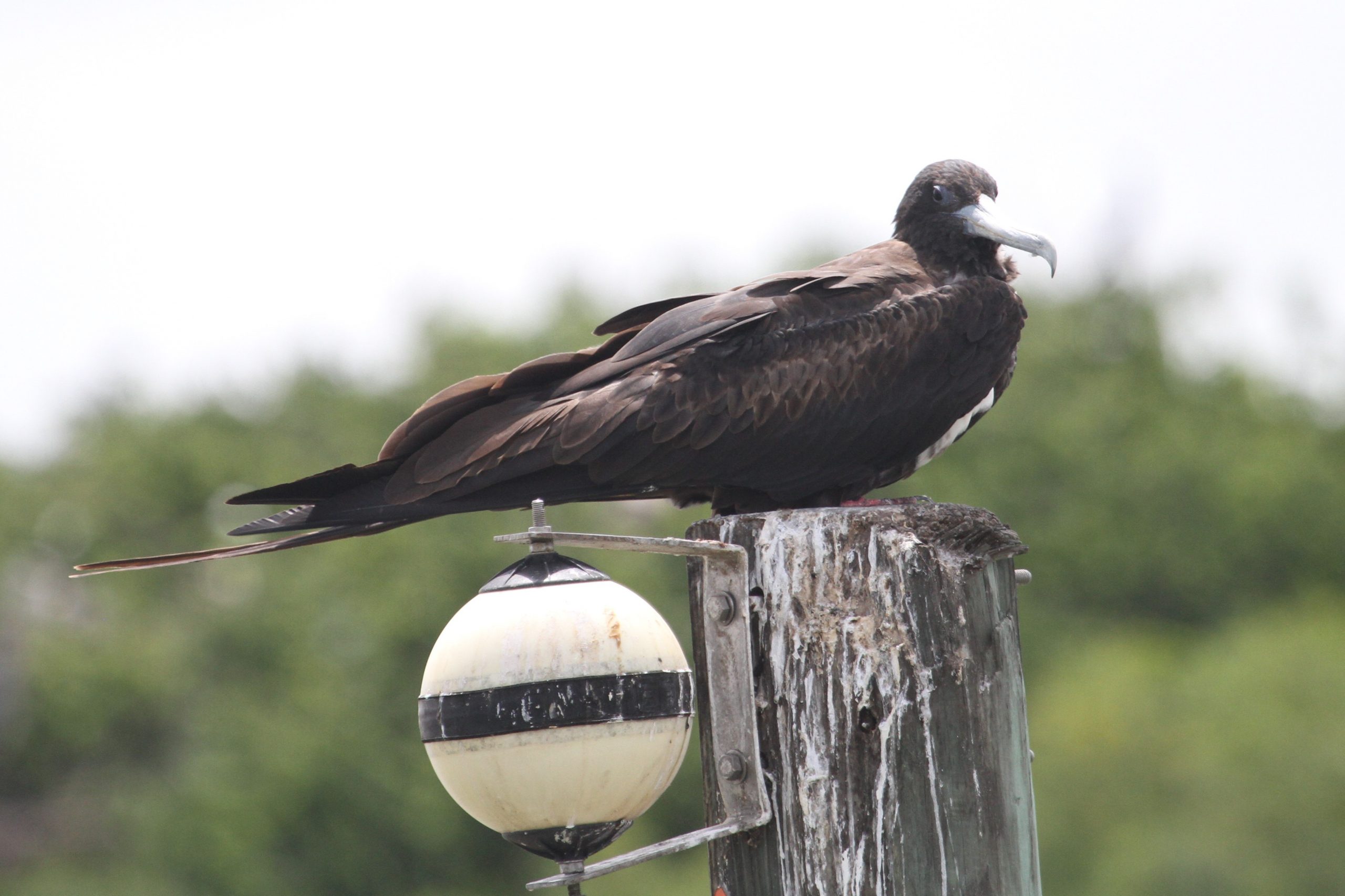 We found UF incubating on the breakwater with J6 nearby. 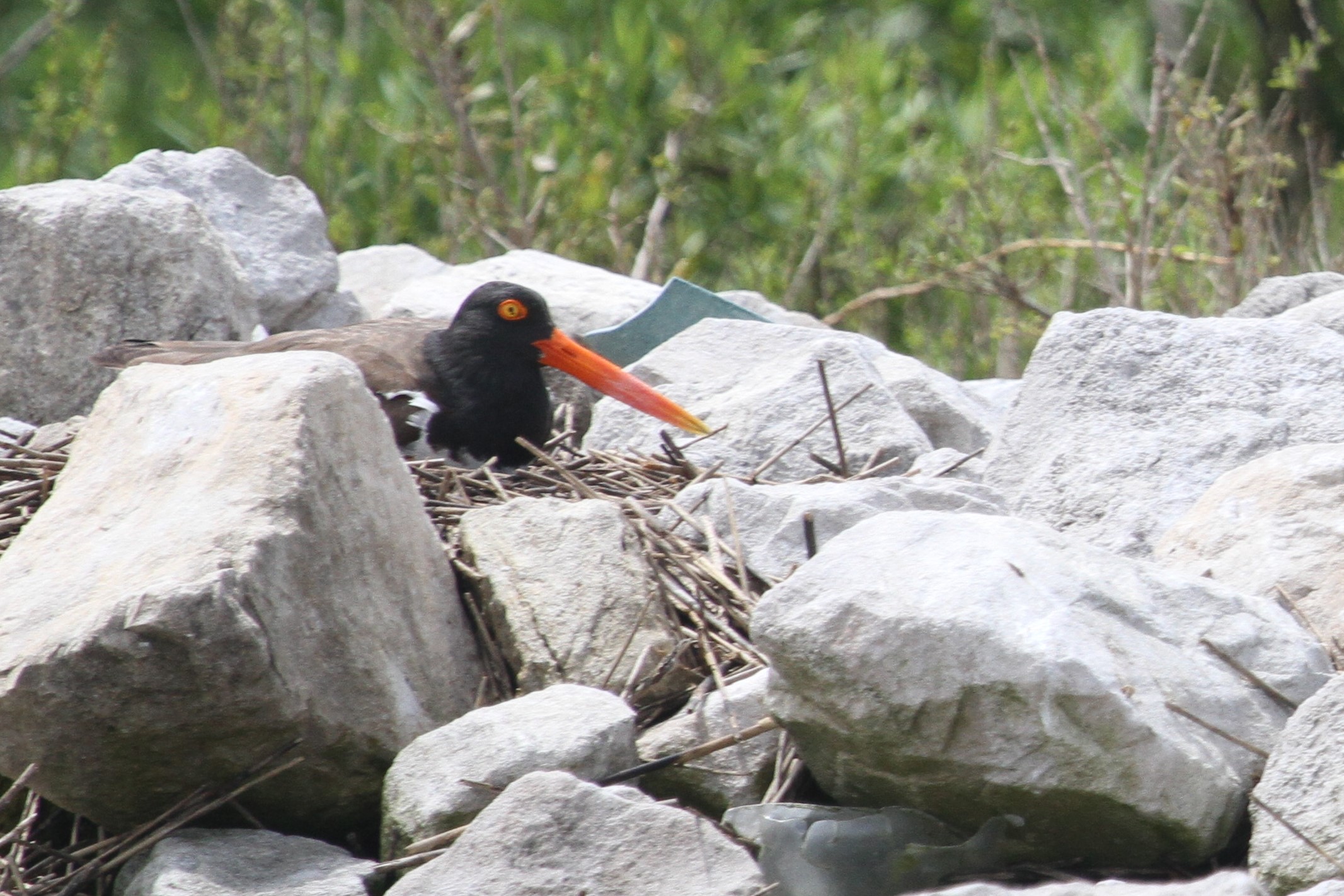 There was a barge coming so we couldn’t sidle up to the breakwater yet. We went around the corner to check on C1A & unbanded and found them standing along the shoreline. Nothing happening there. E6A & unbanded were not home so we went back to J6 & UF. The barge was gone so after we figured out exactly where the nest was, we went up to the breakwater and saw two eggs still in the nest! I took some photos of the eggs with my long lens camera and when I looked at the photos at home, I noticed that one of the eggs was pipping, meaning it was beginning to hatch! Yay J6 & UF! Can you see that little hole on the right side of the back egg? There’s a chick in there! 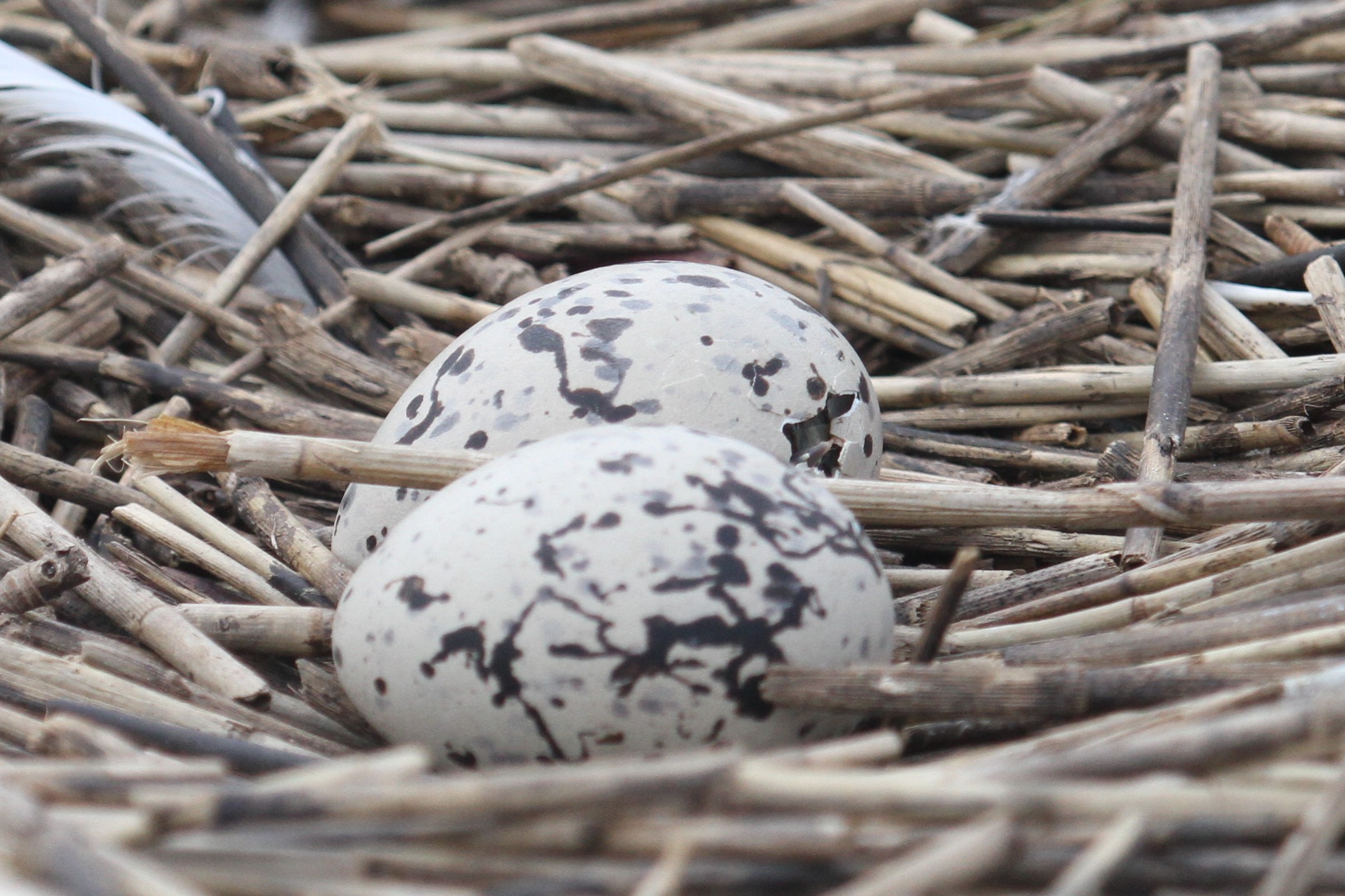 There wasn’t anything happening on Marker 52 and FR & unbanded were still without their chicks. They really set them free early this year compared to last year! The final pair to check on was CA & Y2 and again they weren’t home but it occurred to me they may have taken their chicks to the breakwater around the Tiki Spoil since the tide was so high. That turned out to be exactly right and we found the whole family on the breakwater. 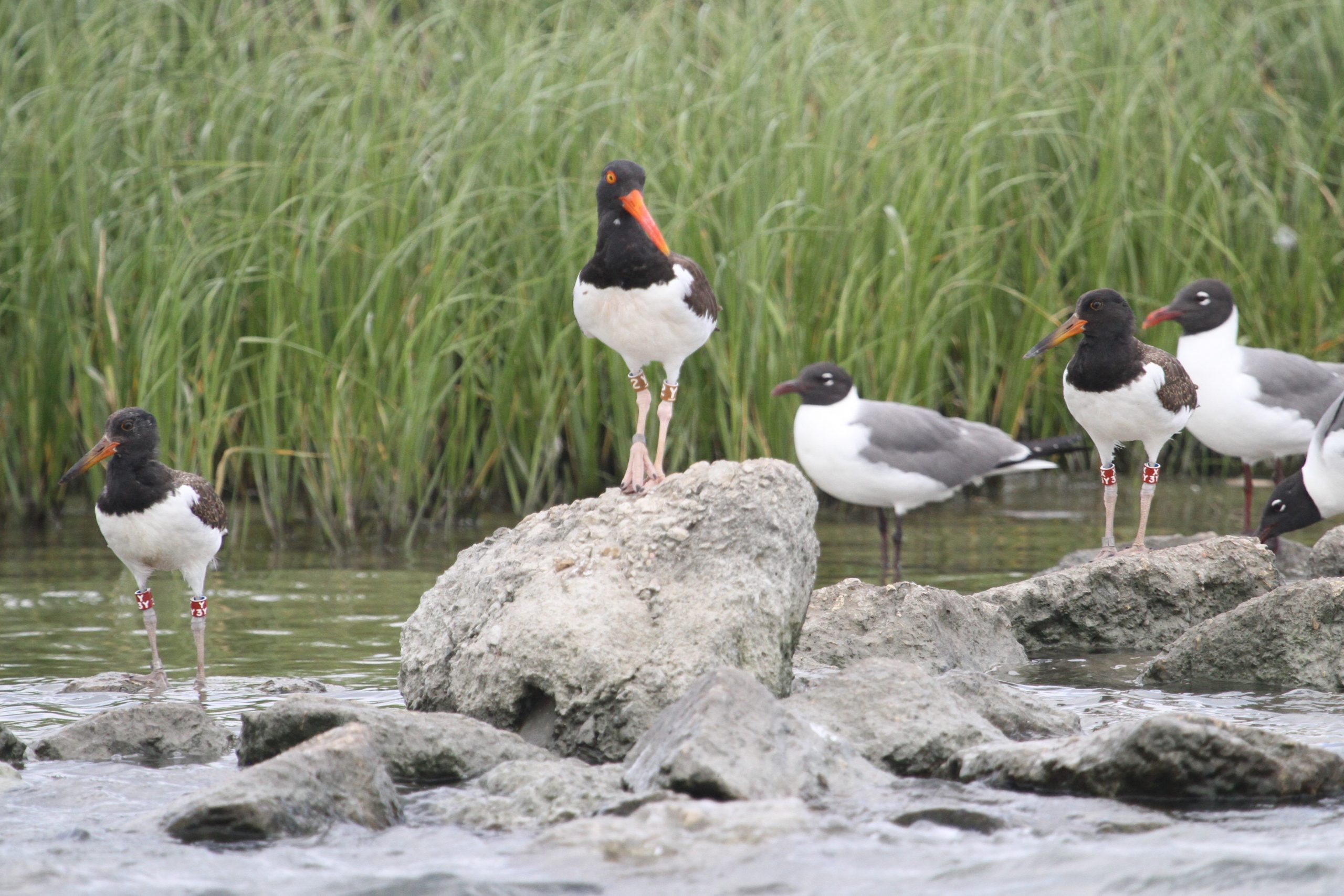 Very glad to see those little swimmers fledged! We showed Michelle and Heather a couple of the islands that have eroded away such that they are basically a reef now and then we headed to John’s house for some refreshments. John’s wife Lynn and Alan’s wife Maureen had laid out quite a spread for us to feast on and it didn’t occur to me until afterwards that I should have taken a photo! Alan met us there too with the net gun so we could go try to get the chick with fishing line.

We ate our fill and had a great visit and then John, Michelle, Heather and I headed back to Struve. The wind had picked up considerably and that was a big detriment to trying to get that chick with a net gun. We shot at the chick four times but the wind messed us up a couple of times and the fact that the whole family was staying together didn’t help. The adults kept giving alarm calls and wouldn’t let us get very close. After chasing them around for two hours and using up all the packed nets we had, we decided to call it a day. Hopefully we can try again next week when we go to check on everyone again. It breaks my heart that that chick has to spend so much time like that. I hope it can find a way to feed. Please, please pick up all fishing line that you see out there!