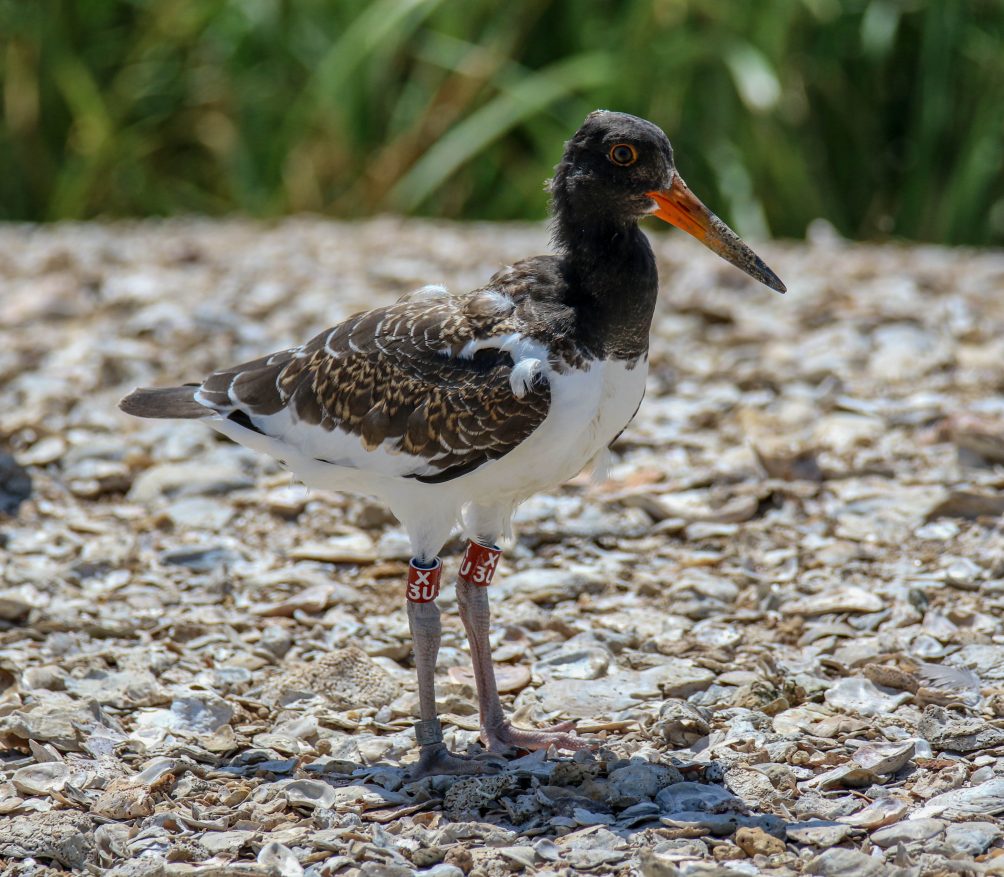 On Wednesday Taylor, Sarah, and I headed out to East Matagorda Bay to see if the skimmers were going to give it a go since the tide was down a bit. They oystercatchers have finished out there for the season and sadly no chicks were fledged. We made a circuit around the bay and found 40-50 skimmers on a very low island at Old Gulf Cut. The oystercatchers that nest there were also present. They are the only pair that had a chick this year but it didn’t make it through a high tide.

We videoed the skimmers and headed back to the boat ramp. I am actually saddened to see these skimmers trying to nest. They have little chance of success there but this illustrates how little nesting habitat there is for them and they are forced into areas that really are no longer suitable for successful nesting. 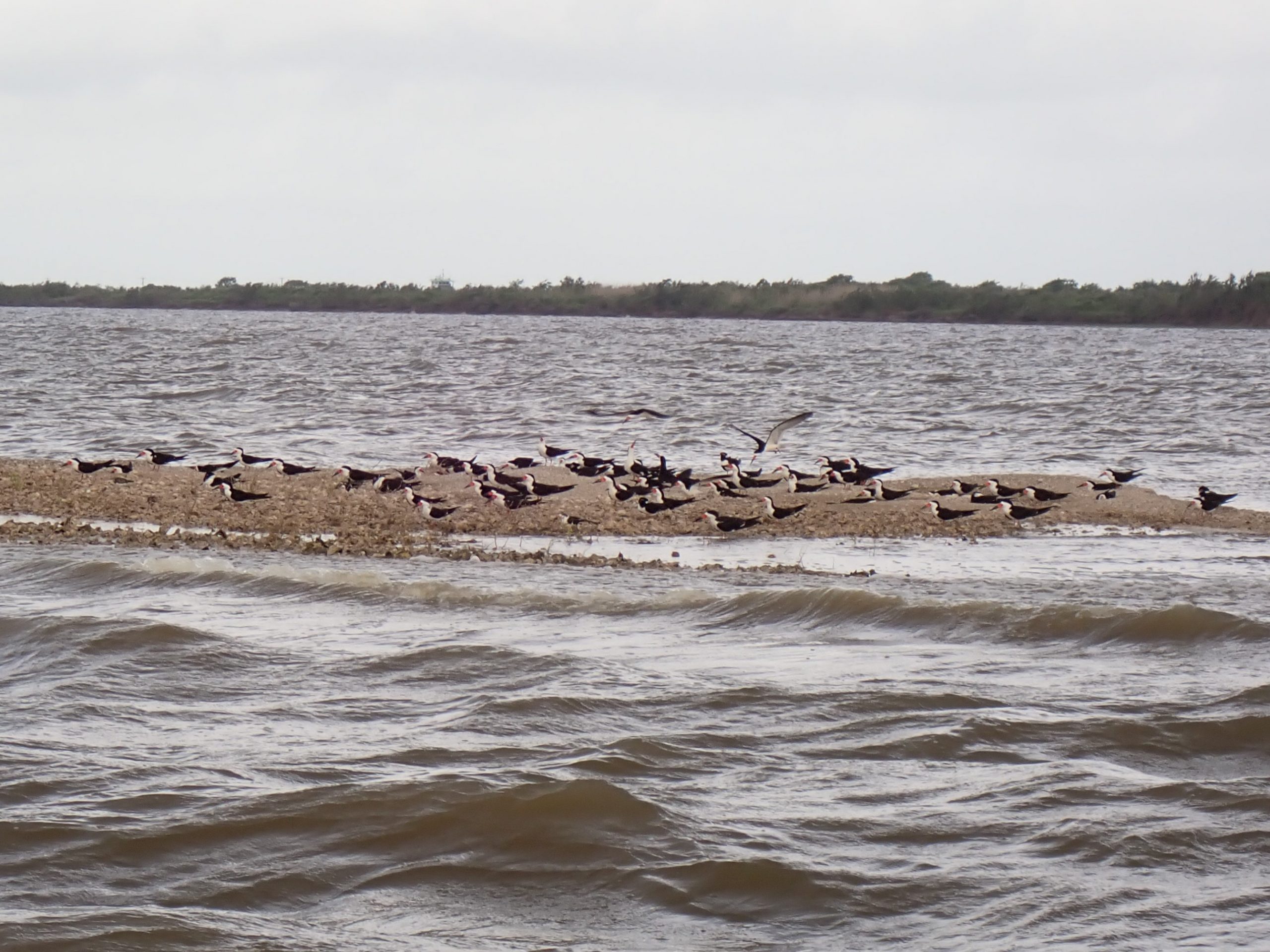 On Thursday I headed out to West Galveston Bay with Alan Wilde, Martin Hagne (GCBO Executive Director) and Rich Kostecke (independent researcher). The tide was still high so no reefs were exposed. As usual the railroad bridge was down but we went under it easily and headed along the shoreline towards Swan Lake. Last week we discovered that 20 & unbanded had a new nest but this week they weren’t there and the egg was gone. I always suspect coyotes in this area but it could have been a number of things. It is rare for a June nest to make it so I wasn’t too surprised. There are just too many things going on out there once we get to this time of year.

We moved on to LR & unbanded. They were not happy to see us just like last week and they quickly walked down the island to one end. I am still not sure if they have a chick or not but if they do it should be big enough soon to be walking around with them.

We headed into Swan Lake and found 11 along the shoreline in area where he and his mate have tried to nest before. We didn’t find any eggs there though. K7 & unbanded flew in from somewhere when we approached their territory. They were likely on the breakwater and didn’t appreciate us checking things out. We looked for X3 & unbanded and their chick but they weren’t in their territory so we checked the breakwater and there they were! 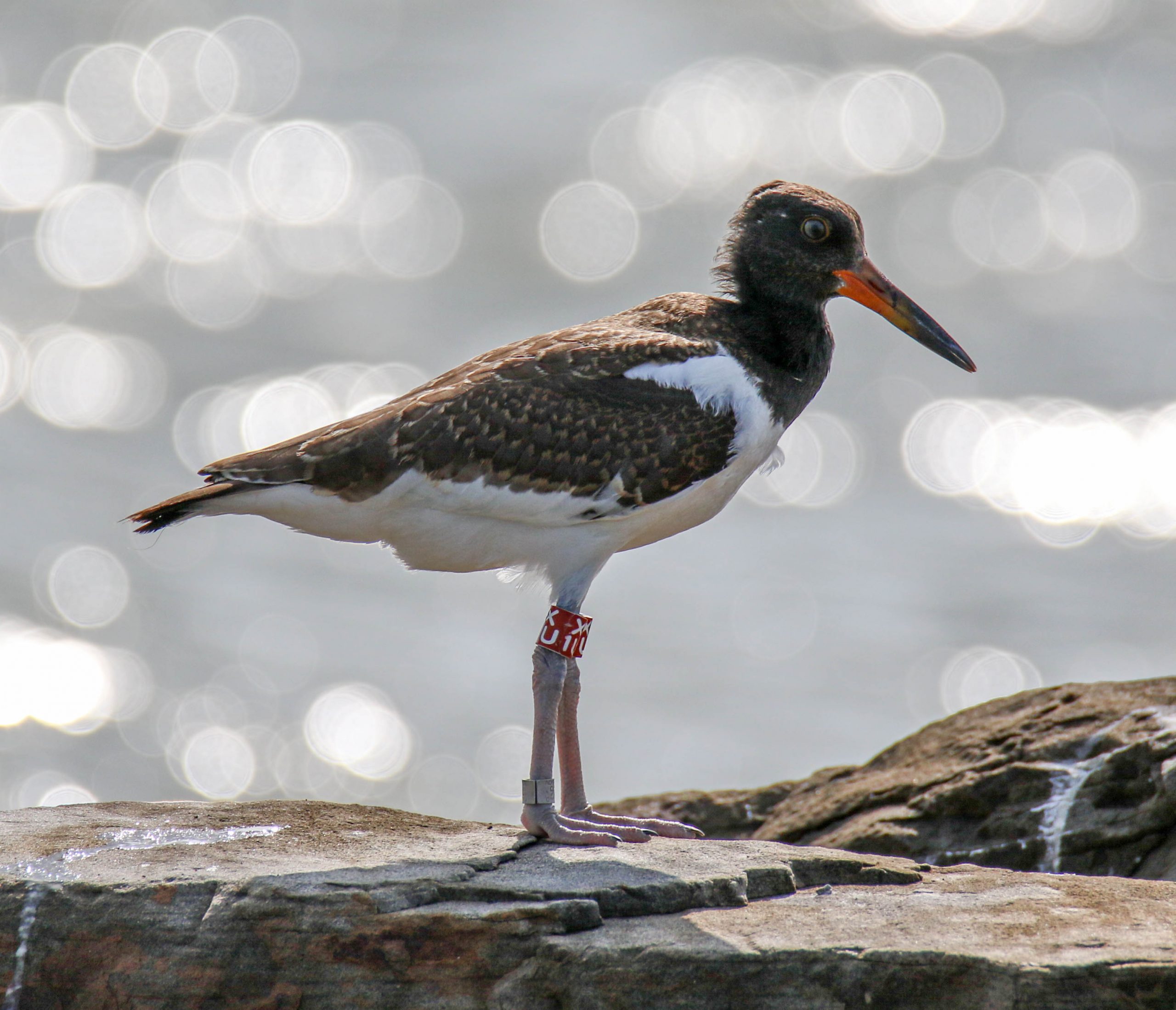 The chick must be flying well to be over there. Great news! We found 39 & unbanded on the breakwater too so we headed back down to West Galveston Bay. Naturally a train was coming and the bridge was just going down as we got there. We made it under easily again and headed over to Struve Luci.

The oystercatchers here are all done for the year but we check on the skimmers and it’s always fun to see if any of the oystercatcher chicks are hanging around. All of the adults were there and we saw one of 12 & unbanded’s chicks and the unbanded pair’s chick as well. LT & JA were back and they had both their chicks with them. I was very glad to see that the chick with a fishing line entanglement was with them and seemed to be doing ok. Last time we saw it both feet were entangled but it had managed to get one foot free so now only one foot had fishing line. It is quite swollen though and has be to be quite uncomfortable. 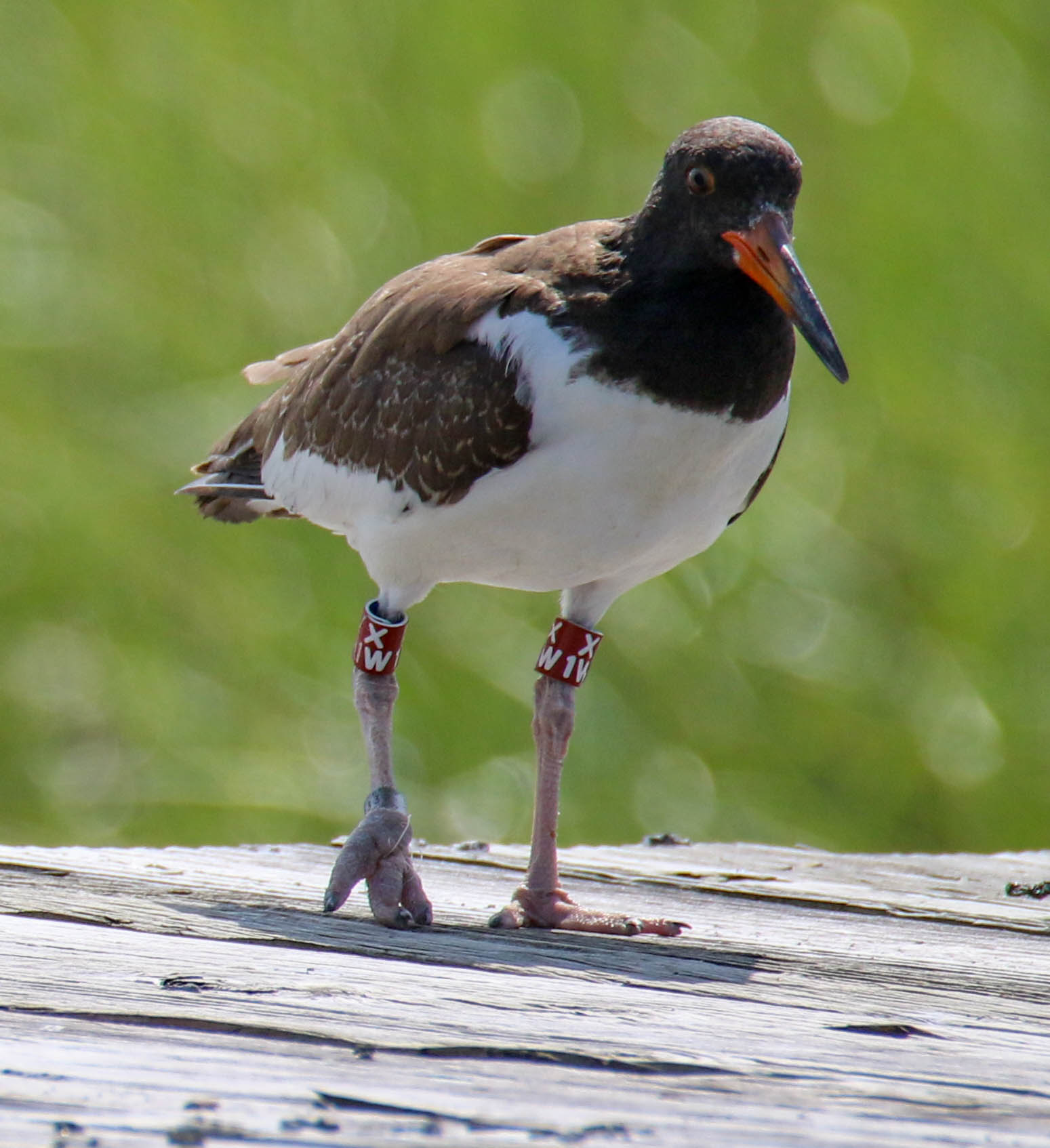 I had forgotten to bring my net gun but Alan had brought his so we got all set up to try to catch it and then discovered the gun wasn’t working right! After fiddling with it and looking online we realized there was a small gasket missing and we didn’t have an extra. Dang it! I really wanted to catch that chick. We will get that fixed and try again next week. At least the bird is doing ok for now.

We saw a rogue pair on the island in the same spot we’ve seen a bird hanging out previously. It was X2 & W2Y. We saw W2Y last week feeding in LT & JA’s territory. It will be interesting to see if this pair manages to stay on this island. There isn’t much room left as there are already five pairs trying to nest on this island.

We headed to Jigsaw and found both pairs there. LH & JX were up on top so I thought they might have a nest but I didn’t find one so we headed to the Galveston Island shoreline. YK & unbanded were still hanging out along the shoreline with nothing going on. At the end of 8 Mile Road we found five birds one of which was the ever present 16. I’ll be interested to see if he tries to nest there next year.

We only found one bird on the Sportsman Road docks and it flew when we tried to id it. I think it was unbanded though. A4A & unbanded were on the Gangs Bayou breakwater enjoying the sunny day so we headed over to South Deer. We found all the pairs there except F1A & E2A but none of them were doing anything exciting. There were some cute Royal Terns chicks there though. 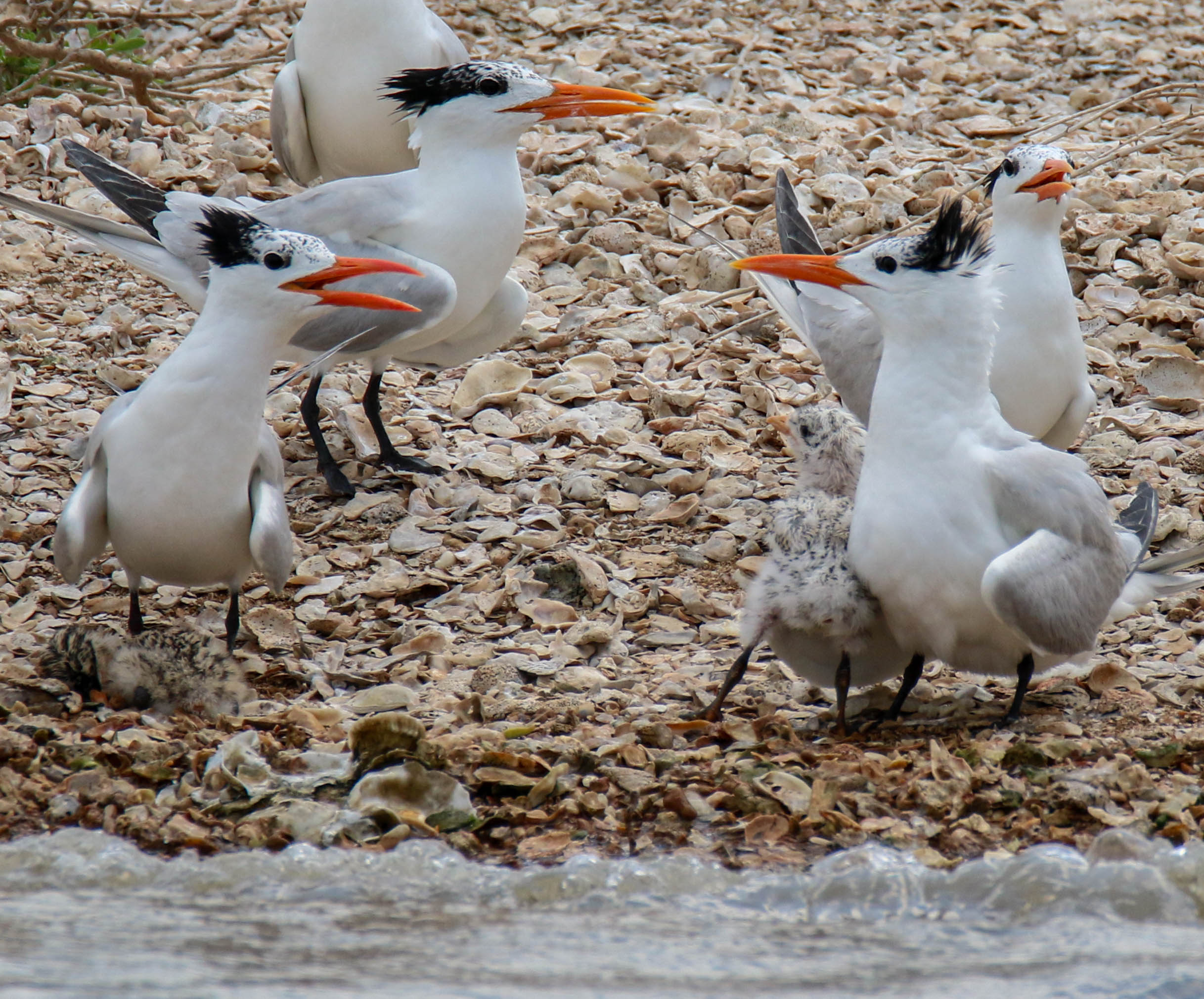 Did you now that White Ibis chicks are dark brown when they are young! 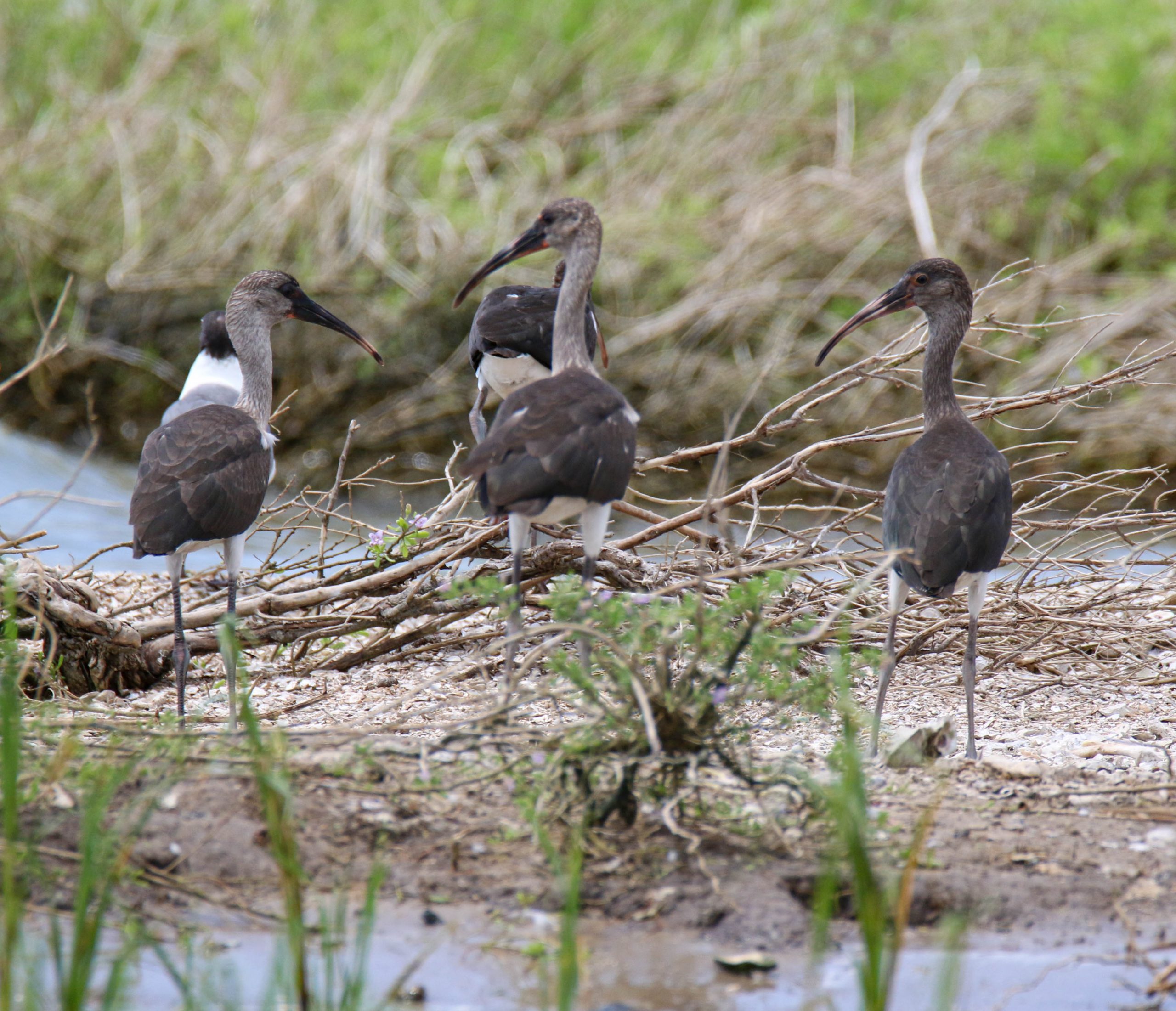 On North Deer we discovered that C1A & unbanded had laid a new nest and one of them was incubating it! The pelicans have largely moved out of the area now so if they can keep it safe from the gulls, they might have a chance. 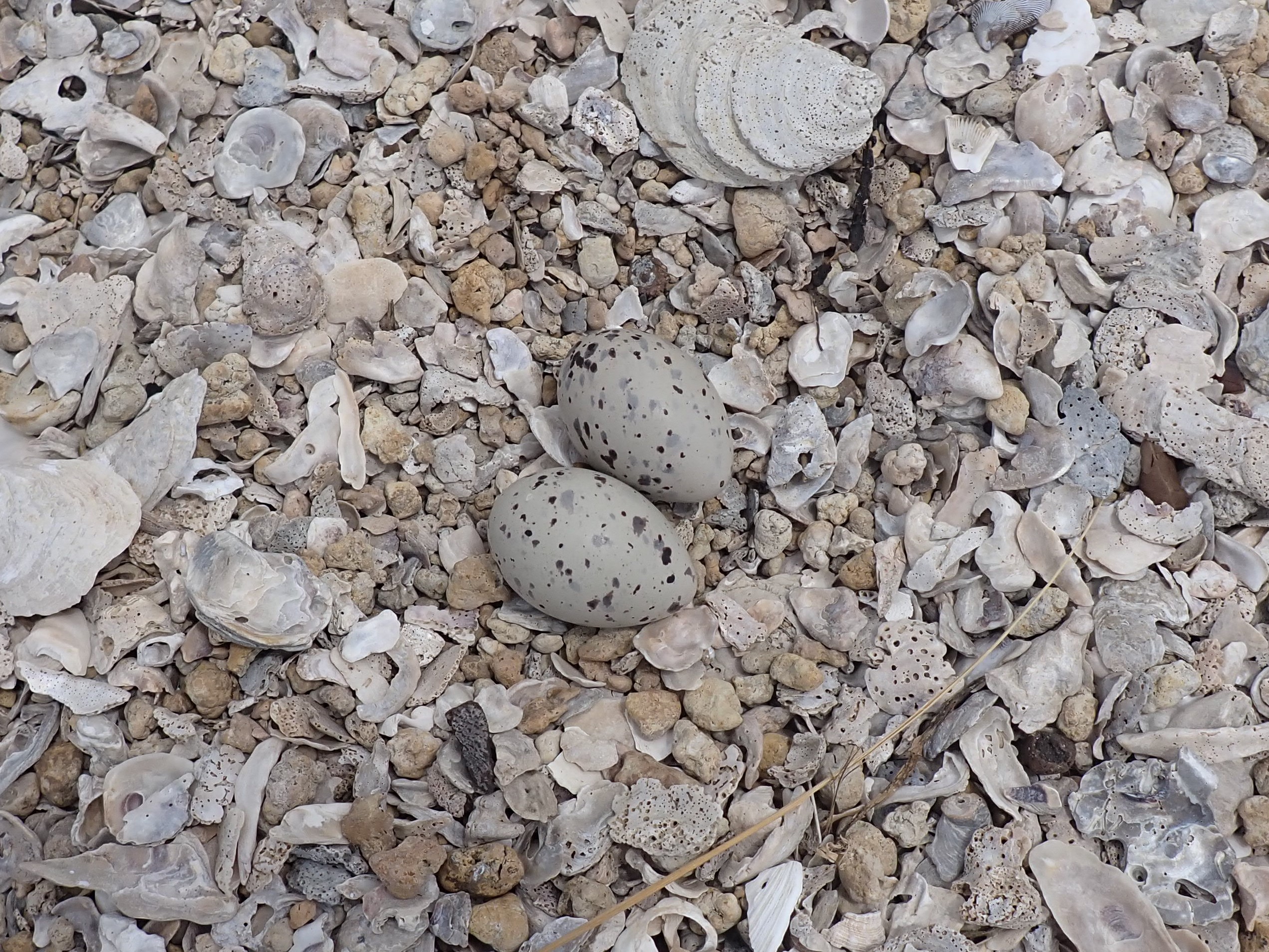 J6 & UF were still hanging on the breakwater but we didn’t see the chick. That doesn’t mean much though as there are lots of places for it to hide and its hard to look from the boat. Hopefully soon it will be out in the open and we can assess its progress.

YM & JH and their chick were back in their old nesting territory. The chick took off when we approached and flew in a big wide arc out over the GIWW. The adults followed it calling and got it to come back to the shore. I guess that chick wants nothing to do with us! It was great to see it flying so well because I wasn’t sure it was going to make it. 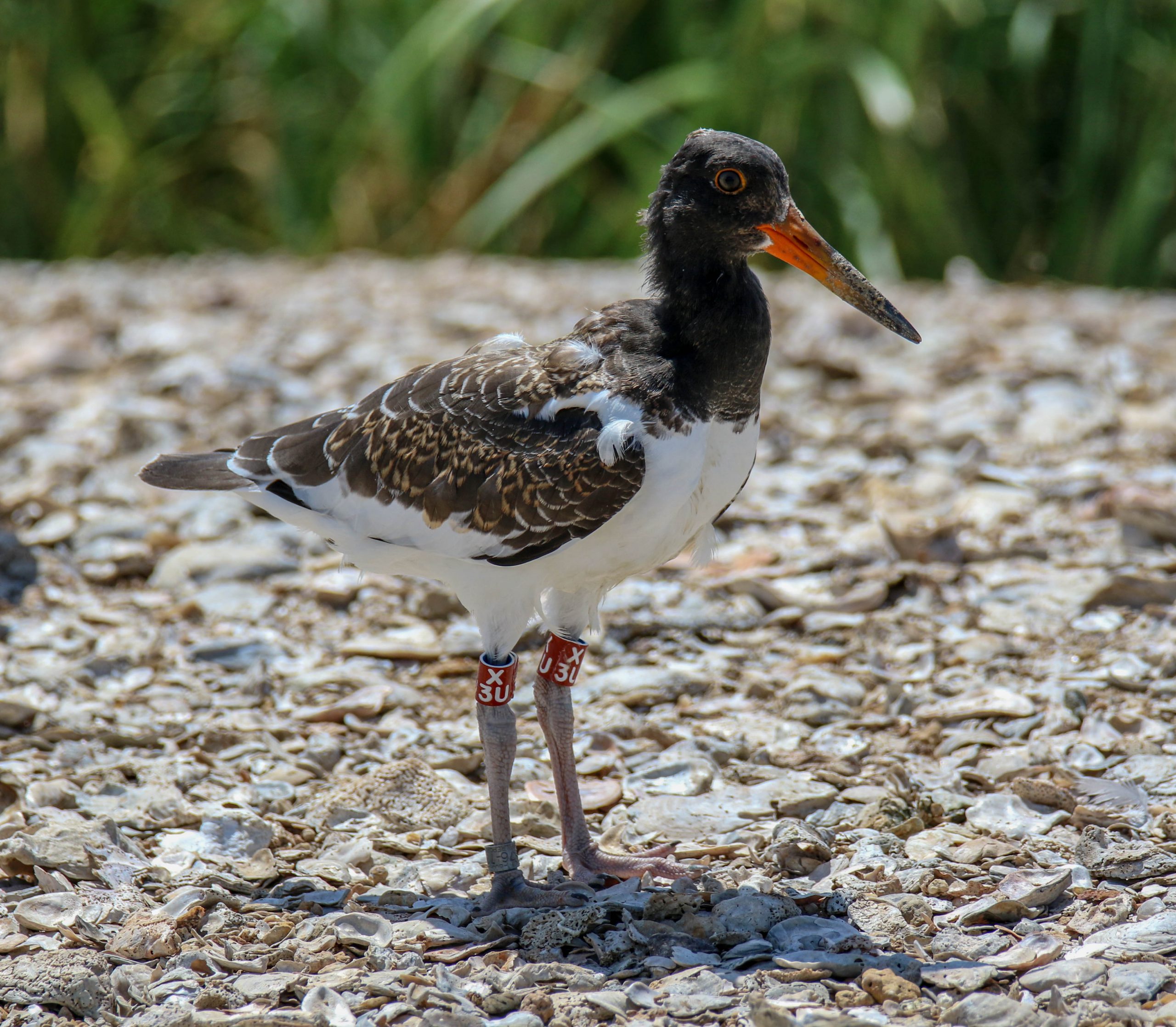 We found JJ & P4 hanging out behind some pelicans but they didn’t look like they had a new nest. W5 & JC weren’t home and FR & unbanded we hanging out on the Jones Bay side of their island. Nothing exciting there! We found CA & Y2 and both their chicks hanging out in a bare area on the Tiki Spoil. The adults flew but Alan managed to snap a couple photos of the chicks who stayed put. 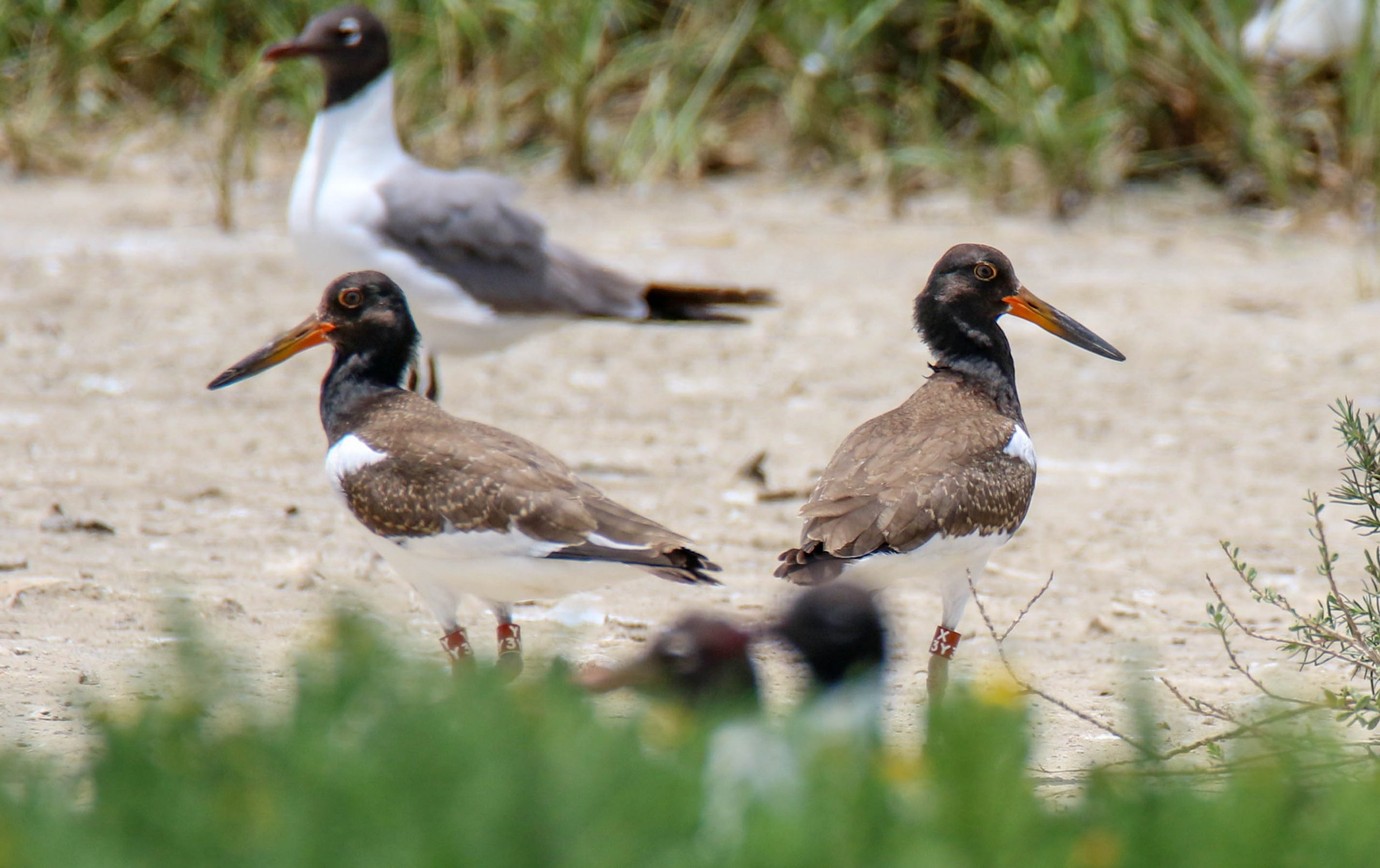 That was the last pair so we headed back to the boat ramp. Things are really slowing down now. I expect we won’t find any more nests so it will just be a matter of seeing if J6 & UF’s chick makes it and if C1A & unbanded can have a successful nest.