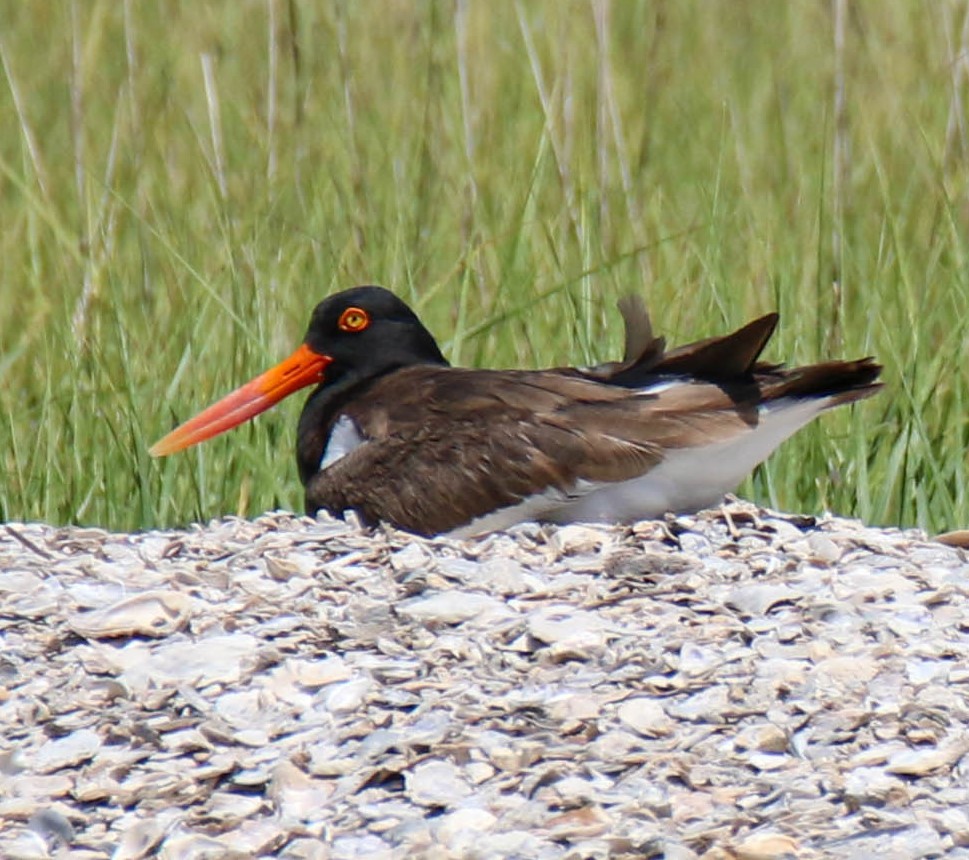 Well the weather was beautiful when Alan and I headed out to West Galveston Bay on Thursday. There wasn’t much wind so the water was calm and the thunderstorms hadn’t started building up yet. We didn’t really need to go to Swan Lake because the pairs up there are all done but I like to get a resight of each banded bird every month so we headed up there any way.

20 & unbanded were on a reef feeding and LR & unbanded were standing on their island enjoying the beautiful day I guess. 11’s mate was on one of the breakwaters, but 11 was on a mudbank alone. Perhaps they were having a disagreement about something! Then we found K7 alone on a breakwater too. What’s up with that? 39 was along too and we didn’t see X3 and family so we headed back across the bay. No fights with the railroad bridge!

We headed to Struve to check out the skimmers. Most of the oystercatchers were there but not LT & JA’s chicks so we couldn’t check the status of the entangled chick. We saw this Long-billed Curlew which must be just back from the breeding grounds. It must be a failed breeder else it wouldn’t be back so early. 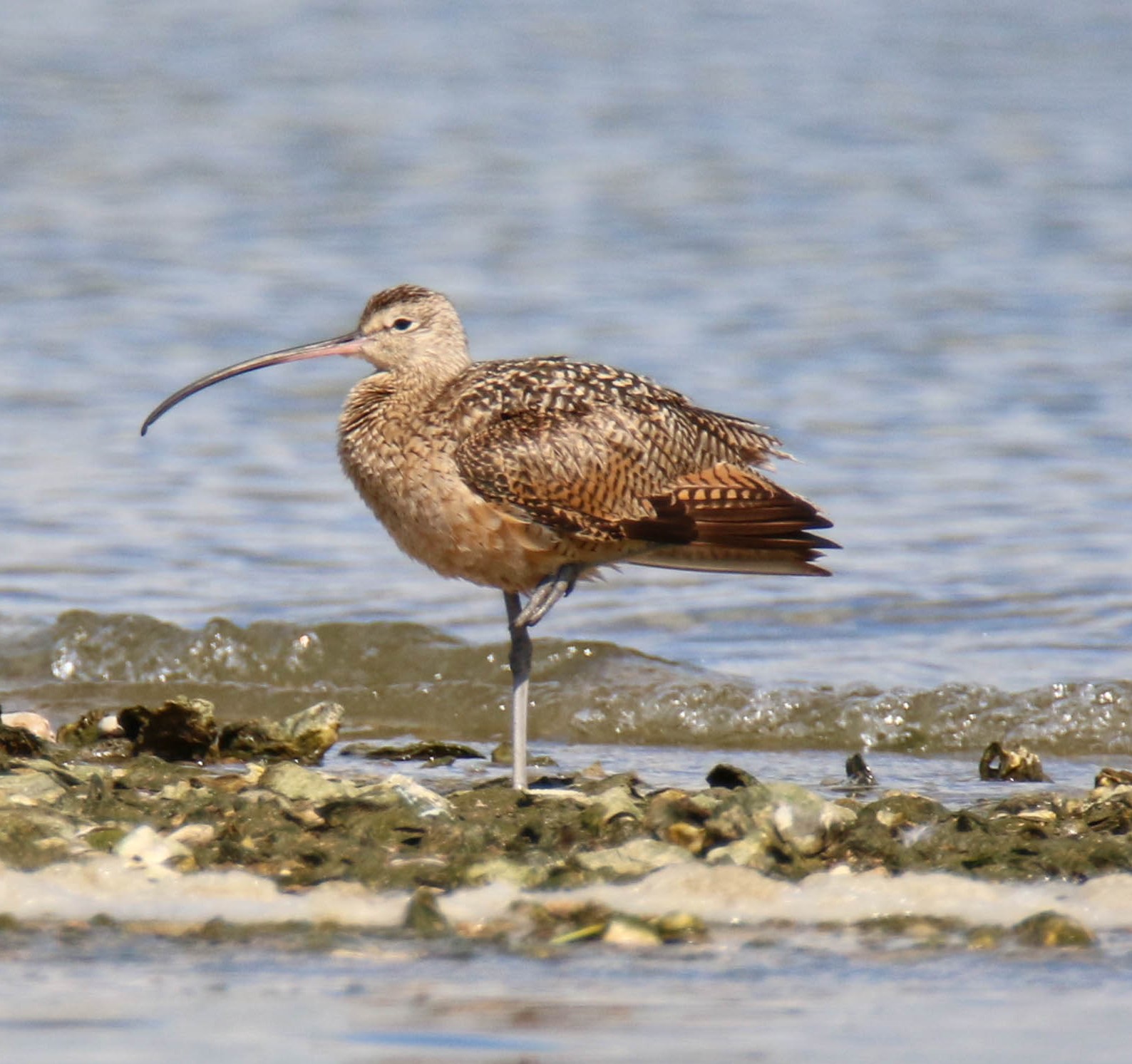 While counting the skimmers I discovered that several of them have chicks! Yay! The need about four weeks to fledge so let’s hope we don’t get any high tides or fisherpeople going on the island. Can you see the chick under the adult? 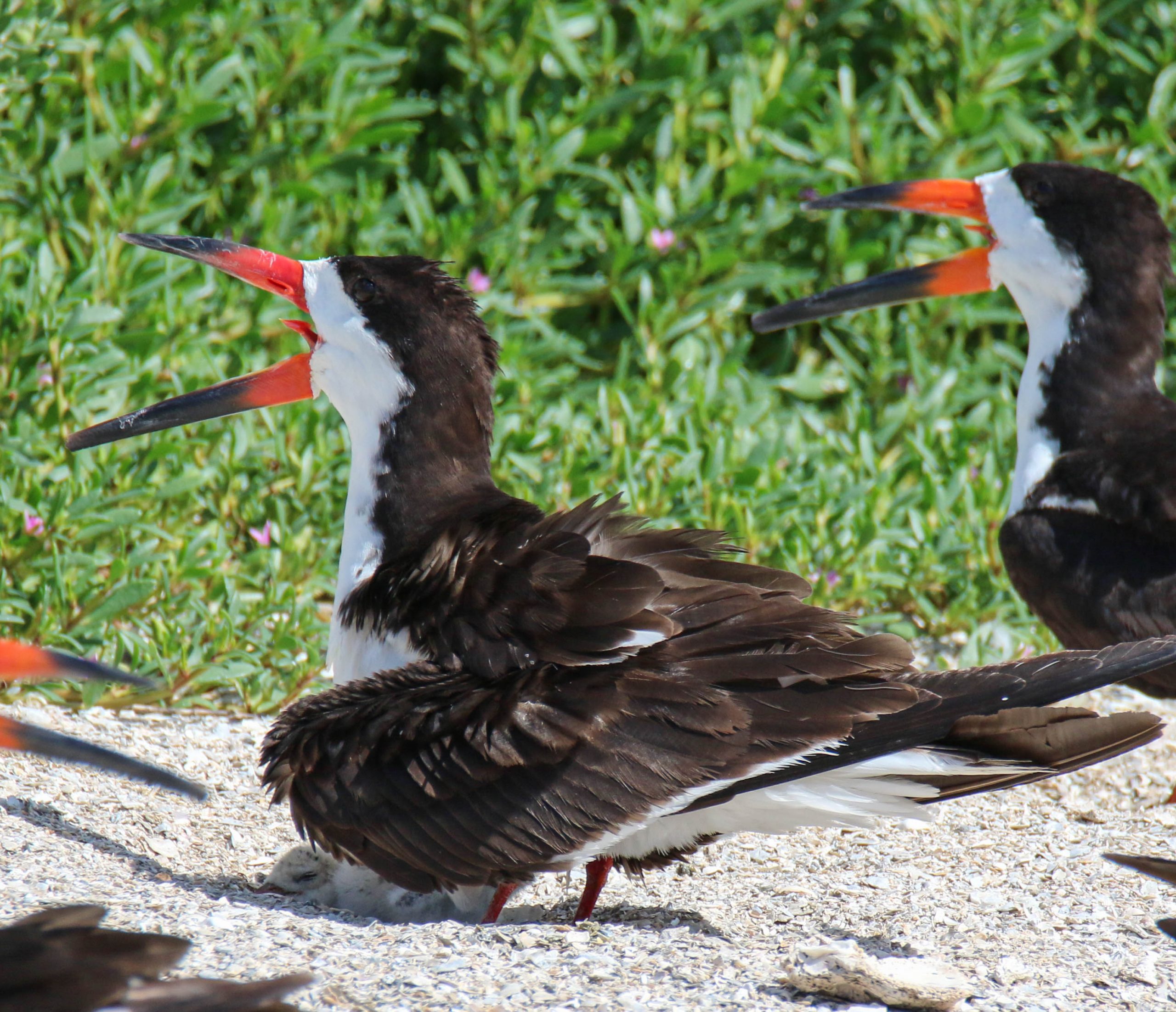 The Jigsaw pairs were loafing on the reefs and YK & unbanded we doing the same on the Galveston Island shore. We found 10 birds at 8 Mile Road and something put a burr under 16 & unbanded’s saddle and they started doing a cocked tail display to run off a couple of youngsters. That youngster looks a bit surprised! 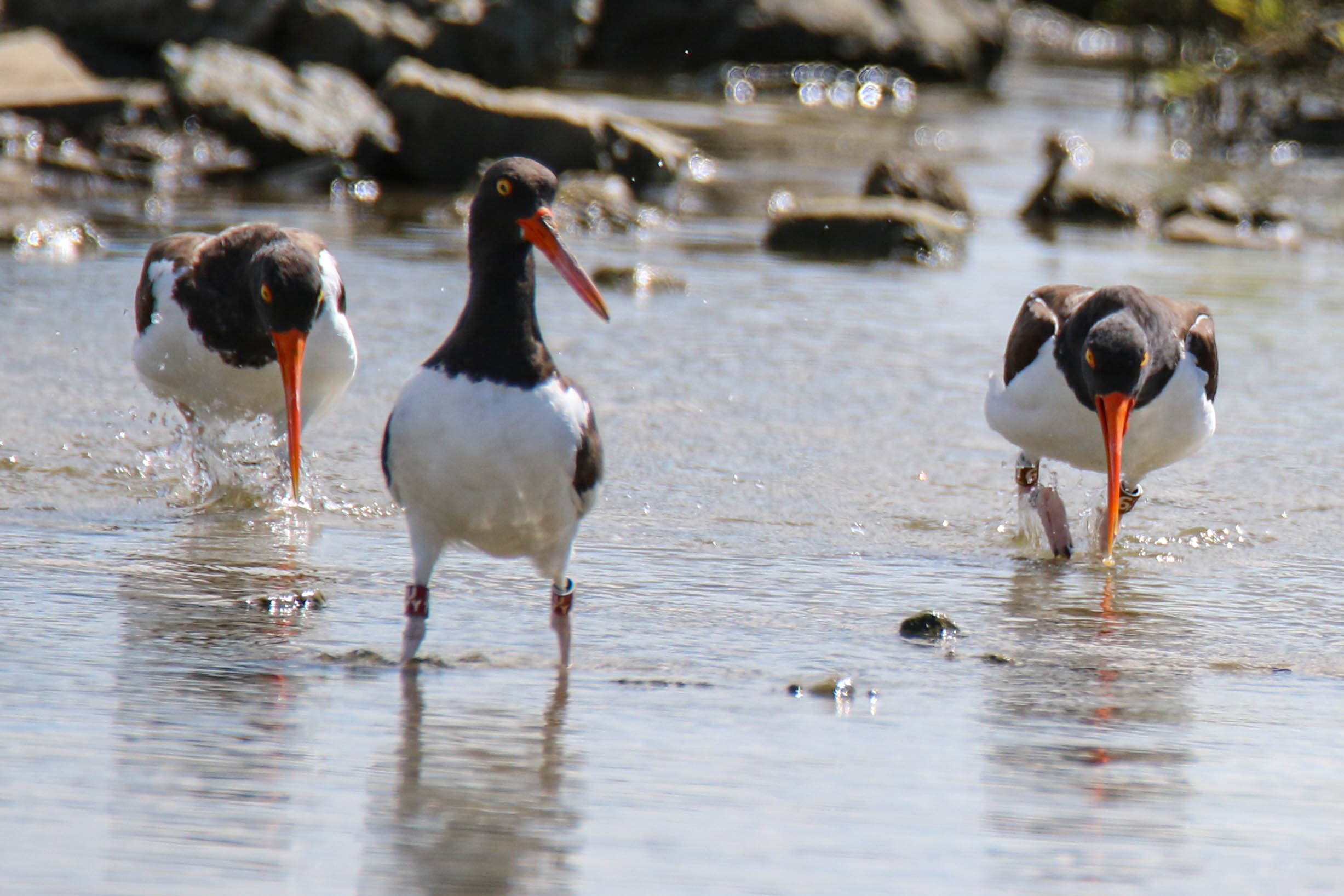 Alan and I both commented that it was the most activity we saw out of 16 all season. The old man still has it! 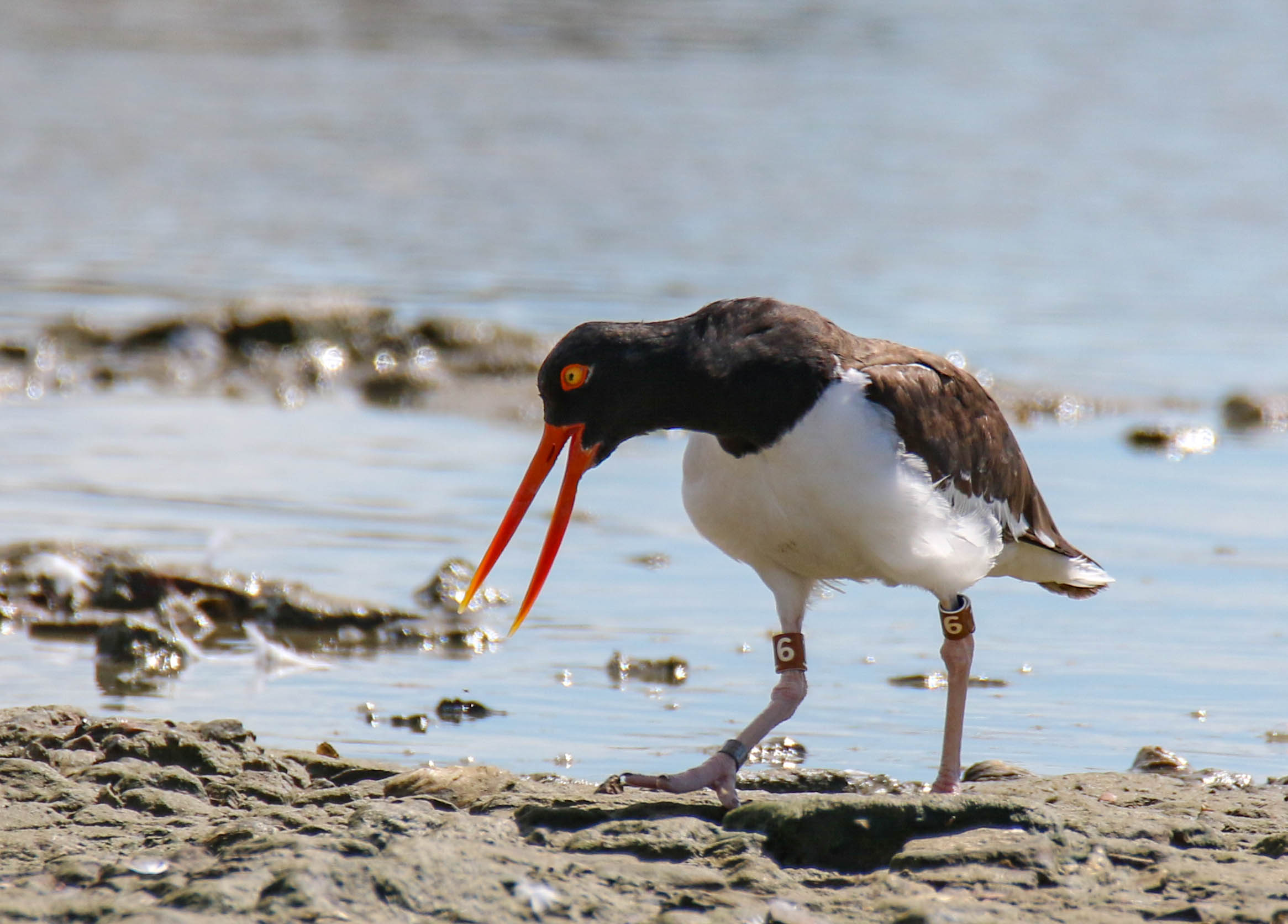 I’m really wondering if they are going to try to nest there next season. That will be interesting to watch, especially if they are successful!

We didn’t find any birds on the Sportsman Road docks and when we checked the Gangs Bayou breakwater we found an unbanded bird followed by a banded bird. I assumed they were A4A & mate but then further along we found another banded and unbanded bird and that was A4A & unb. Oh no! I was afraid the other pair was A1A & unbanded which would mean their nest failed so we went back to look and found it was U5Y, not A1A. Phew! What a relief. U5Y is getting around. Perhaps it will have a territory next year.

We motored over to check on A1A & unbanded but before we got there, we found A5A standing alone up on the shell ridge. If it was the heart of the breeding season, I’d think it was guarding a one egg nest. I went to look and didn’t find any eggs though. Finally we got to A1A & unbanded and saw that they were still incubating. Yay! On a lark I went to check the eggs to see if one was pipping and sure enough one was! Wow. Pipping means the chick is starting to peck its way out. We could hear the chick peeping inside too. Can you see the hole in the egg? 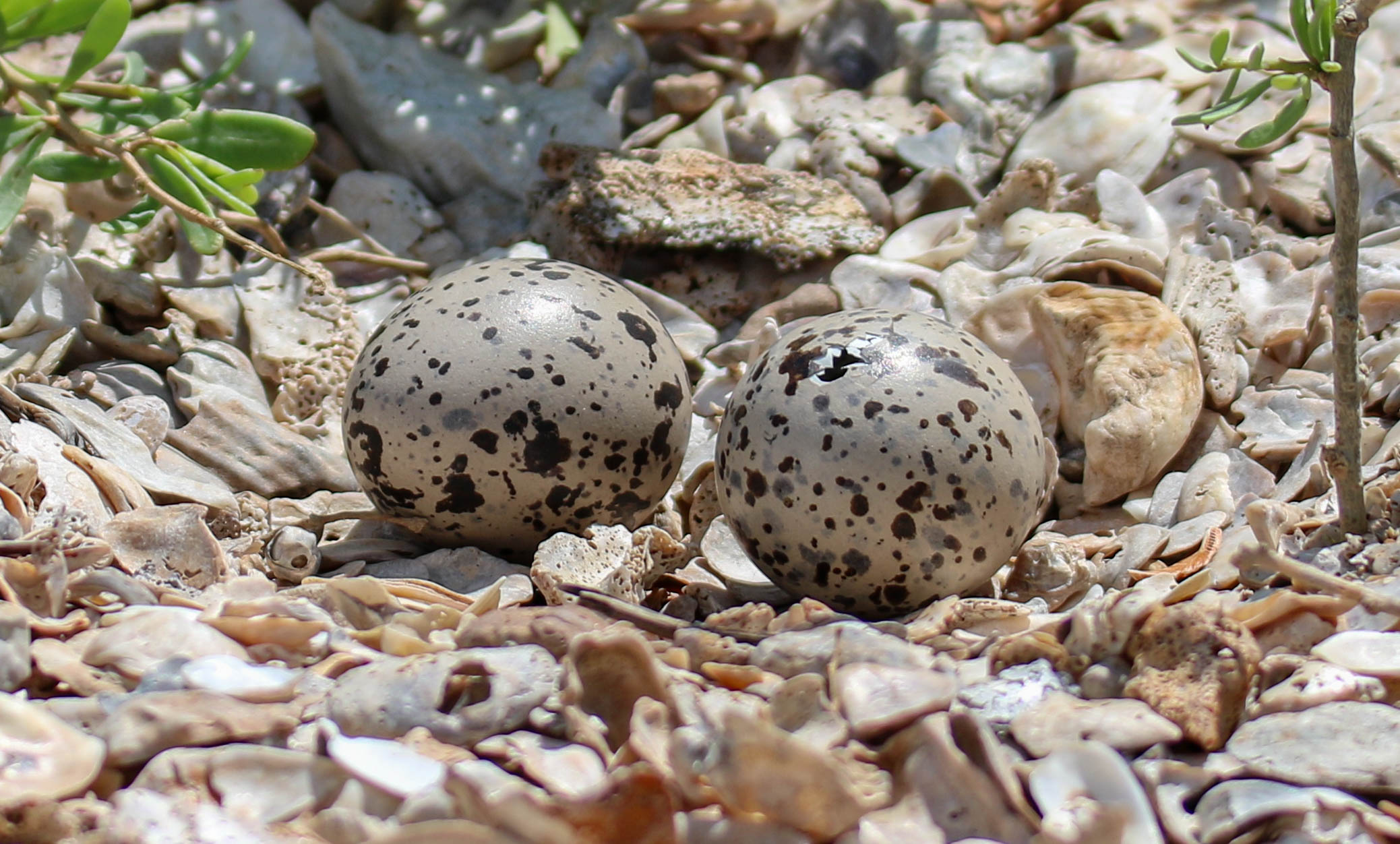 A1A & unbanded were most unhappy with out intrusion so we left them alone and continued on our route.

Y7 & unbanded were absent and F1A & E2A were loafing about on the shoreline so we headed to North Deer. C1A & unbanded were both standing near where their nest had been. The eggs were gone but they were very upset at our presence so I’m pretty sure they had a chick up there somewhere. Yay again! I hope it makes it. There are less pelicans and gulls now but there are still plenty of them that could get a chick.

We had come prepared with snake chaps and boots to check out the area behind the breakwater to see if J6 & UF were hanging out back there with a chick but instead we found them back on their small island with no chicks. Bummer! They wouldn’t have left an unflighted chick alone so if they were both on the island there’s no chick. So sad after they worked so hard!

YM & JH and their chick were back where their nest had been hanging out. Not much else to do I guess if you’re an oystercatcher this time of year and your belly is full.

We moved on Marker 52 and found JJ & P4 sleeping in the same place they were last week. Did you guys move at all?!

We moved on and Alan and I both saw a bird in W5 & JC’s territory sitting up on the shell looking very much like it was incubating a nest.

No way! I’ve never found a nest after June 22. But sure enough, JC was incubating a single egg. 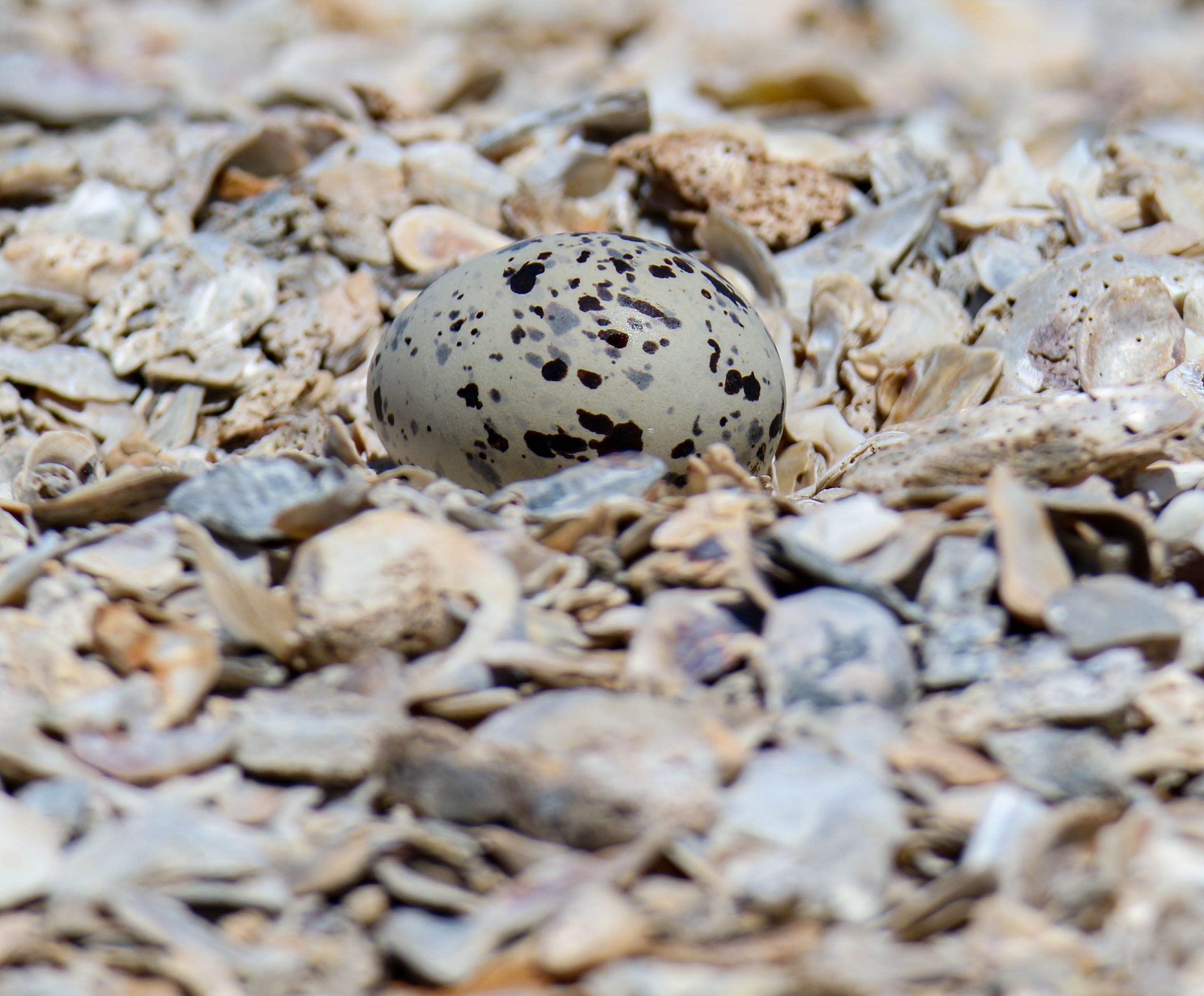 Dang girl, it’s hot out there! Congratulations W5 & JC. You get the award for the latest nest ever. W5 was no where to be found though so I’m not sure if he is on board with this late nest thing.

FR & unbanded were on their little reef and FR didn’t even react when we moved in for photos. He is losing his mojo.

We had seen Y2 with one of her chicks on Marker 52 and we discovered CA with the other chick on their island. That chick took off as soon as it saw us though and we couldn’t find it anywhere. I think perhaps it is not over us catching it and banding it!

We ran the length of the breakwater around the Tiki Spoil looking for the chick and instead we found an unbanded bird and farther on X4. X4 has tried to nest in a number of places but has never been successful as far as I know. It was banded as a chick in 2011 so it’s getting old now. Maybe next year it will find a safe place.

We were done with everything else so we went back to see if A1A & unbanded’s chick had finished hatching but it hadn’t. I took a video of it pecking at the shell though. You can see it on my personal Facebook page if you’re interested. It’s pretty cool.