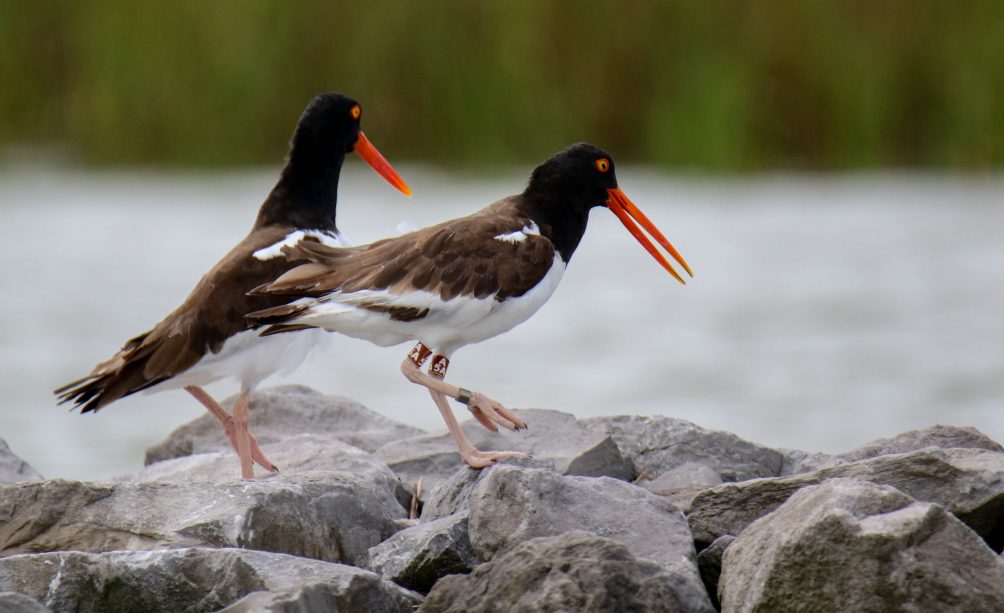 Has anyone started building an ark yet? If so, can I give you a couple birds to take along? Sheesh. The rain has been unrelenting. We were scheduled to go out on Thursday but we switched it to Friday because the weather forecast looked slightly better. Fortunately, Alan was on the ball and called me Thursday morning to report that it looked like it was going to be clear the entire morning. It took me a bit to get my act together, but I managed to get to the boat ramp a little after 9:00 only to find the radar showing a big green blob over the bay and darkening skies in the distance. I was afraid I’d driven all the way up there for nothing but we waited a bit and it looked like it was clearing so we forged ahead.

Just as we got the boat in the water, rain drops started falling and the wind had whipped up to 18 mph.  Dang! I had already planned to work our way across the bay using the islands to keep us sheltered from the wind so we headed out anyway and by the time we got to Jones Bay, the rain had stopped.

Nobody was home in Jones Bay including Fred so we moved on to check on W5 & JC’s nest. To be honest I wasn’t expecting it to still be there but happily one of them was incubating the other one was standing nearby! The wind was blowing too hard for us to check the egg number so we left them too it. P4 was standing on her beach but there was no sign of JJ. Always suspicious but we didn’t see him on a nest anywhere.

YM & JH were hanging out on their beach with their chick among the young pelicans. We checked the breakwater and found an adult there which I thought would be J6 but instead it was JJ! What are you doing there dude? We’ve never seen him there before. Of course, that doesn’t mean he hasn’t been there before though. They do have wings! 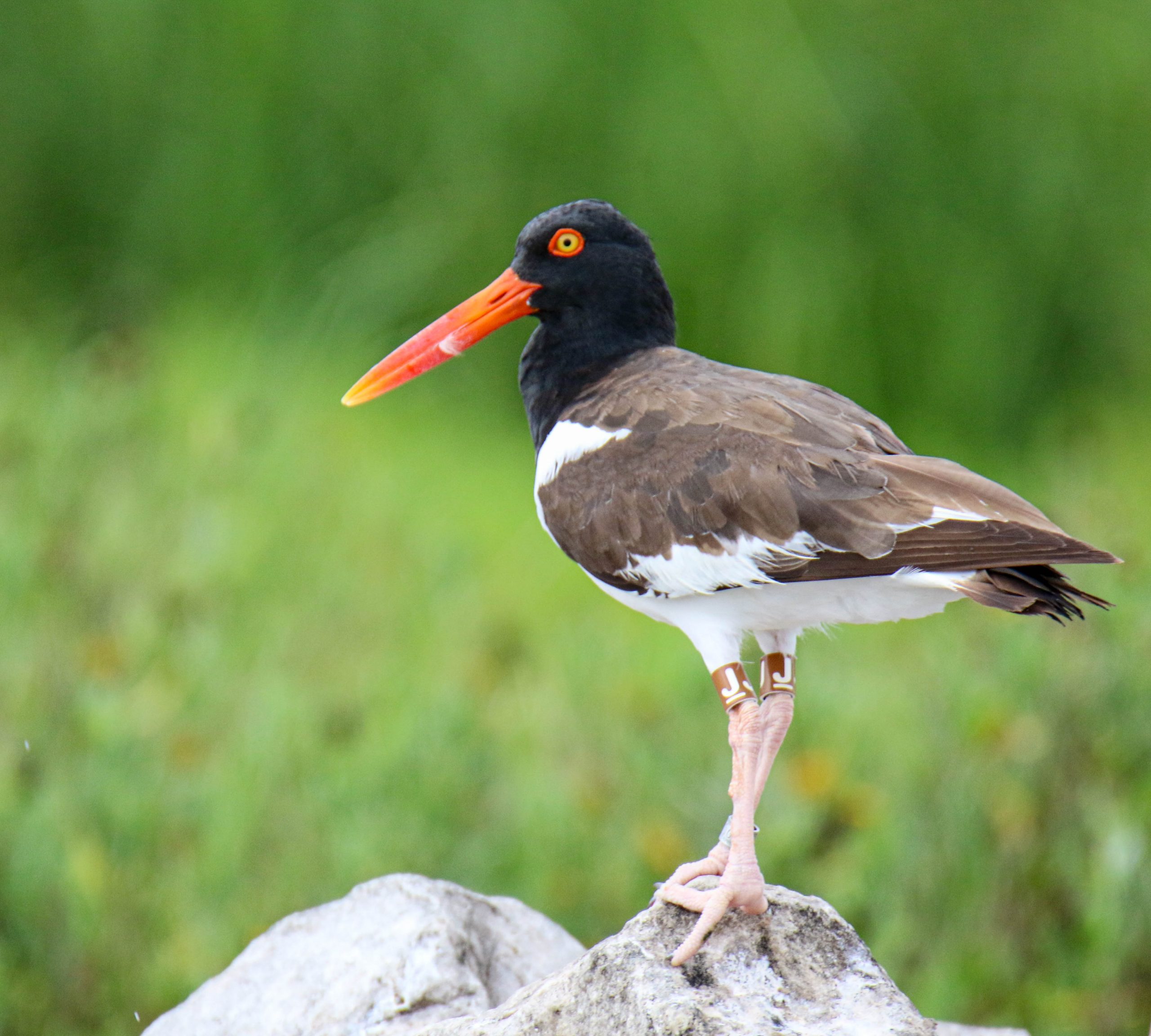 We checked J6 & UF’s island but what was exposed (not much) was covered with young pelicans who tried to make a hasty retreat at our approach. I had to swerve to miss several of them. They just don’t have the flying bit mastered quite yet!

Next up was C1A & unbanded and I was anxious to see if they still had a chick. We motored by and didn’t see them and I feared the worst but then just as we were leaving I heard one call so we circled back and they popped up from behind a spartina patch. I’m betting they were snuggled in with a chick back there. Yay! We left them alone and moved on to South Deer.

No oystercatchers home until we got to Y7 & unbanded’s beach. There was a pair there but they flew before we could get any photos to see who they were so it will remain a mystery. We went the rest of the way around the island and found no more birds until we got to A1A & unbanded. We saw one bird near where the nest had been and another bird a little way down the island. I checked them out in my binoculars and discovered they were both banded. That’s not right! A1A’s mate is not banded. The interloper turned out to be U5Y. 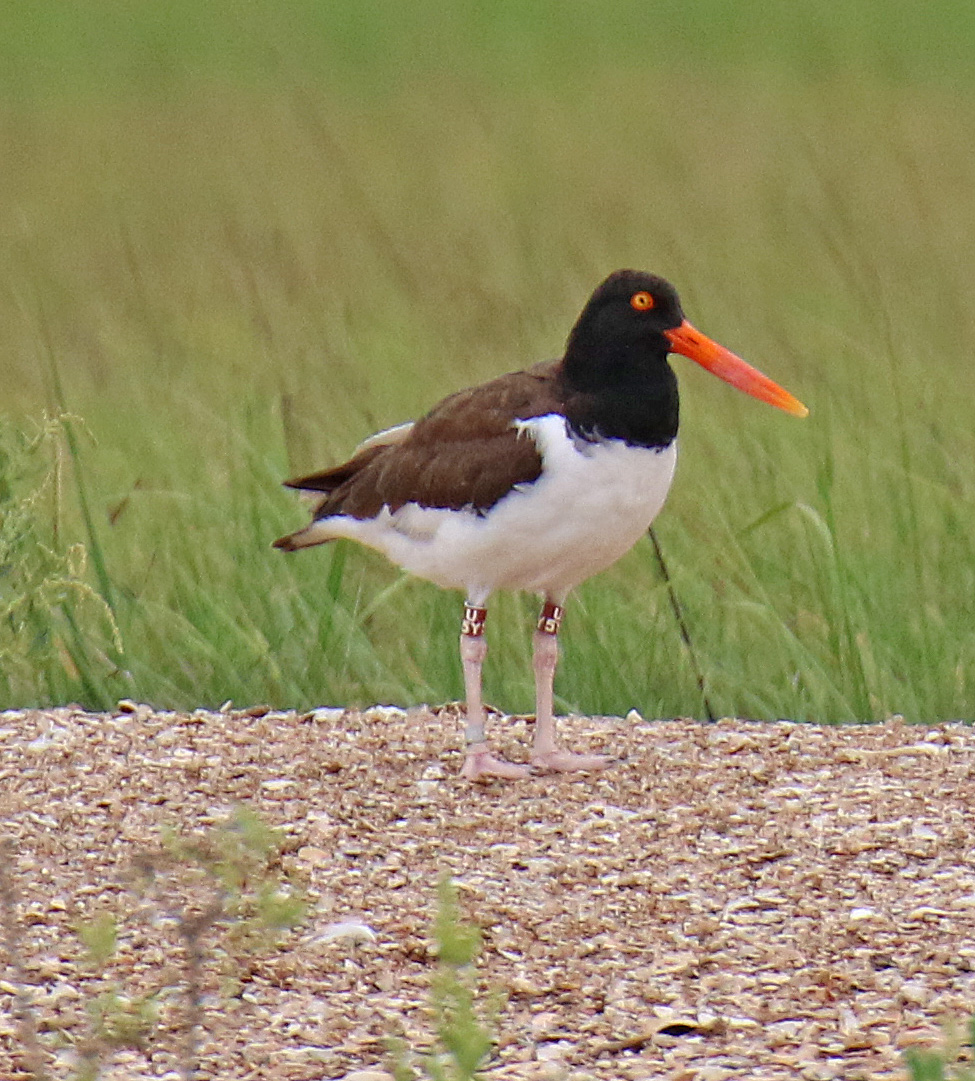 She’s been hanging around a lot. I hope she doesn’t interfere with their chick raising. A1A’s mate popped up a few minutes later and it seemed certain they still had a chick because they were both quite agitated at our presence. The tern chicks are getting big! 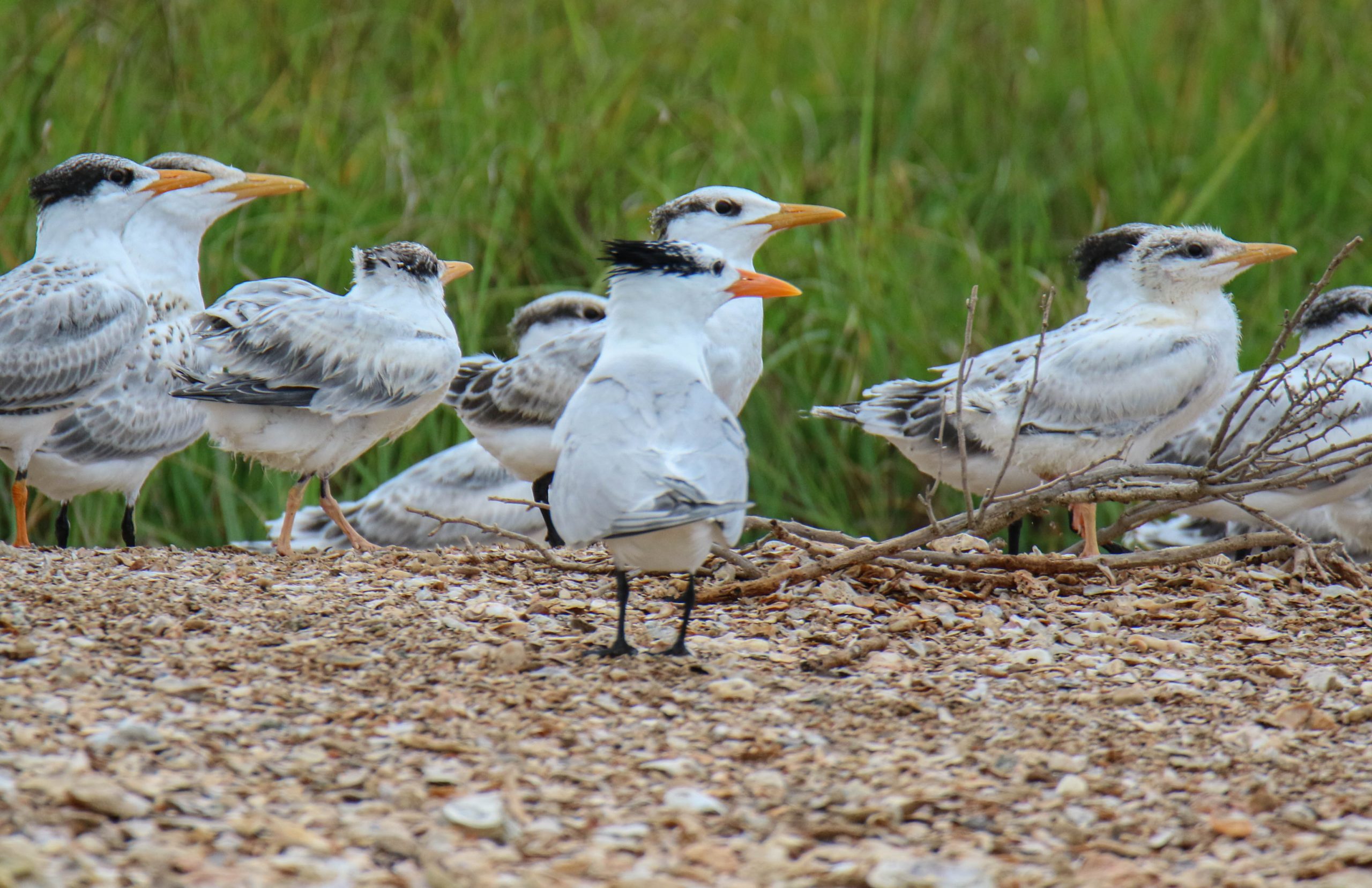 I wished them all well and we moved on. The sky was looking like this! 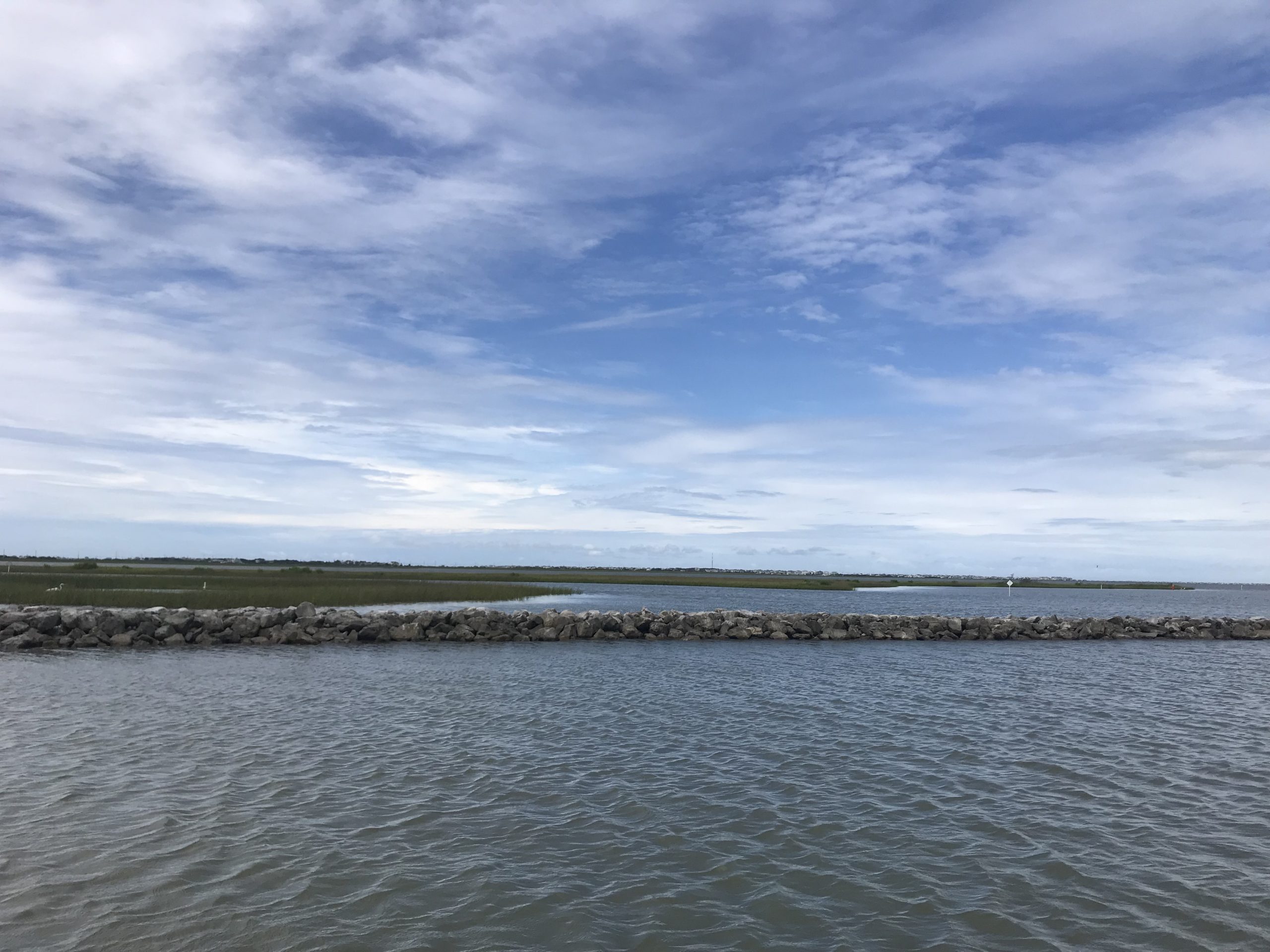 Yay! We checked the Gangs Bayou breakwater and found some excitement. There was a trio consisting of A5A & unbanded and U9W on the breakwater. They were being attacked by A4A who was trying to run them off. I’m not sure where A4A’s mate was but he wasn’t giving up. A5A & unbanded were trying hard to defend themselves. 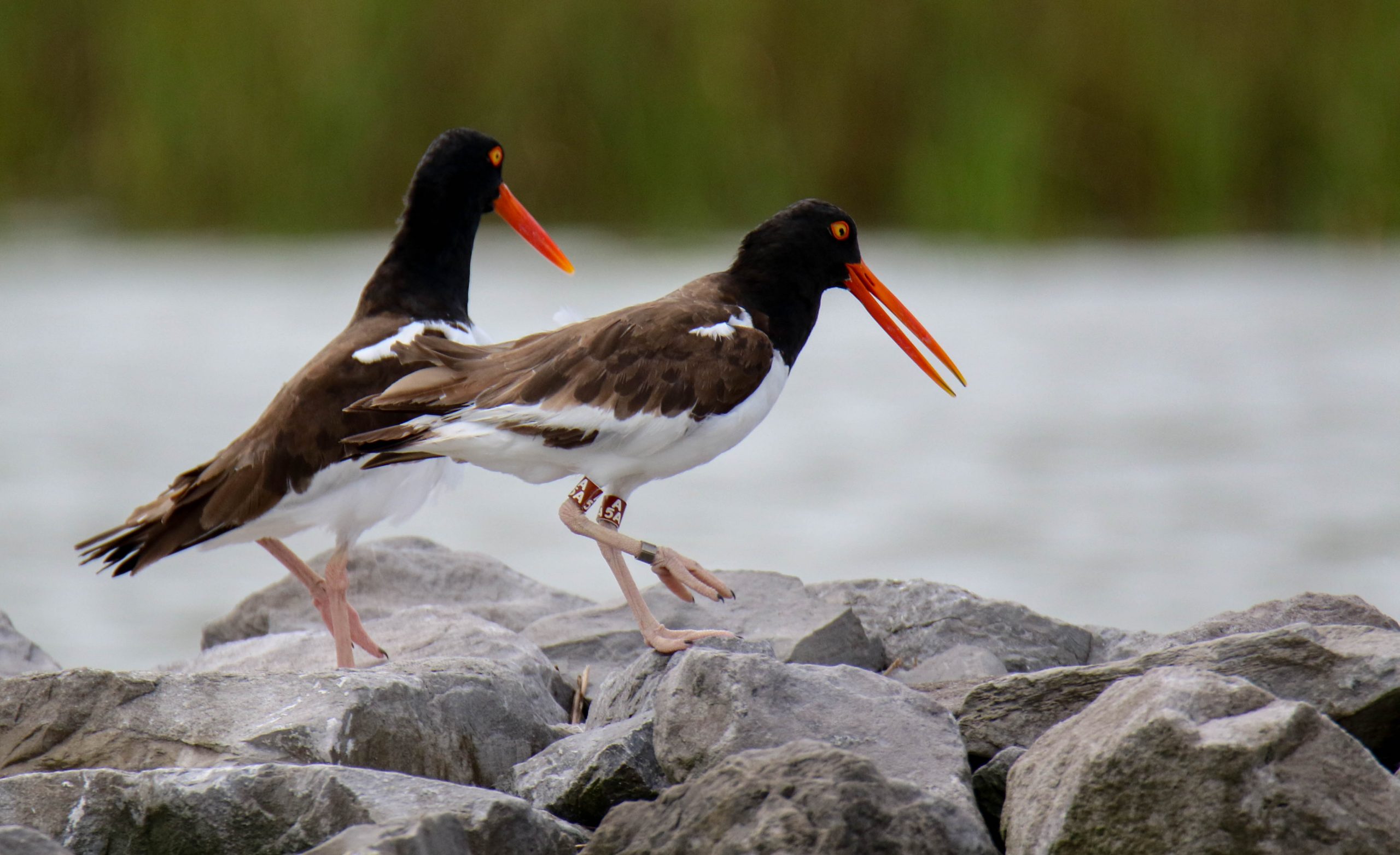 Then we motored down to the part of the island where A4A & unbanded tried to nest and we found another two oystercatchers. What? If A4A was on the breakwater, who was this? Turns out it was C8A and U6W. We banded C8A on Matagorda Peninsula in October of 2019. At that time it was a hatch year bird that had gotten entangled in fishing line and we caught it to remove the line. We don’t know where it was hatched or who its parents are. This is the first time its been spotted anywhere except the Matagorda Peninsula. U6W is one of 12 & unbanded’s chicks from 2020 so it wasn’t far from home. These birds are too young to breed so they aren’t a pair. Probably just buddies that are hanging out together but it is interesting that C8A has ventured all the way to West Galveston Bay. This is why banding is so important! We learn so much about how the birds move around.

We turned around and went back up along Sportsman Road but we didn’t find any birds until we got to the very last dock before 8 Mile Road. There were a couple youngsters there and we found 8 more birds on the 8 Mile Road extension. 16 & unbanded were there as well as F1A & E2A a pair from South Deer. The rest were youngsters. Some of them teed up nicely for a photo. 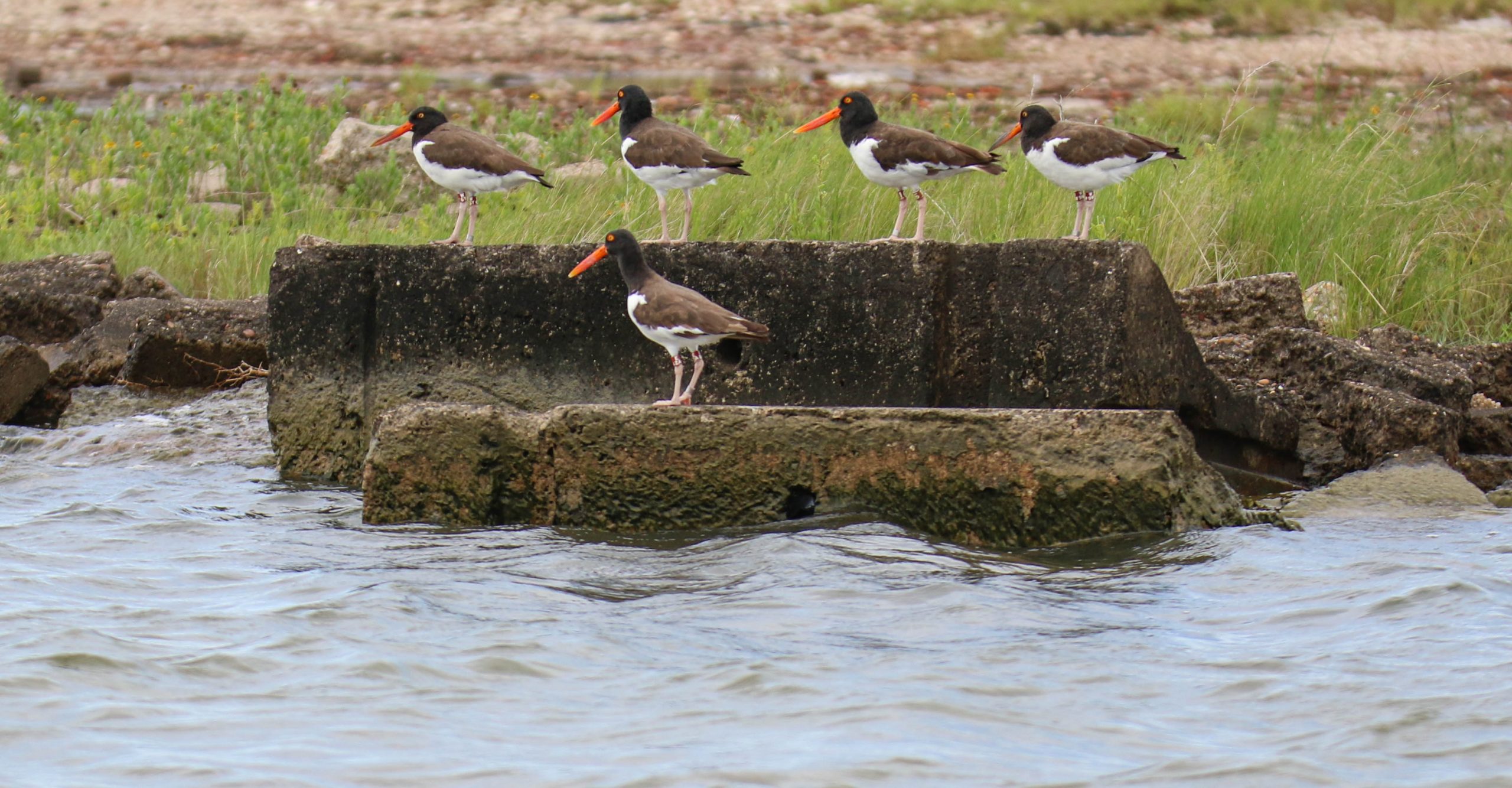 But then they did this!

Alan wasn’t able to get photos of all of them to see who they were. We thought they’d circle around and come back but they did not and we lost sight of them over the horizon towards Offatt’s Bayou. We moved on along the shore of Galveston Island and found YK & unbanded hiding in plain sight along the shoreline. It is amazing how well they blend in with that dark substrate right on the edge of the water.

Nothing was happening on Jigsaw. Both pairs were loafing along the shoreline so we went to Struve to check on the skimmers. Lots of chicks! I counted 22 but I’m sure there were more hiding in the vegetation. 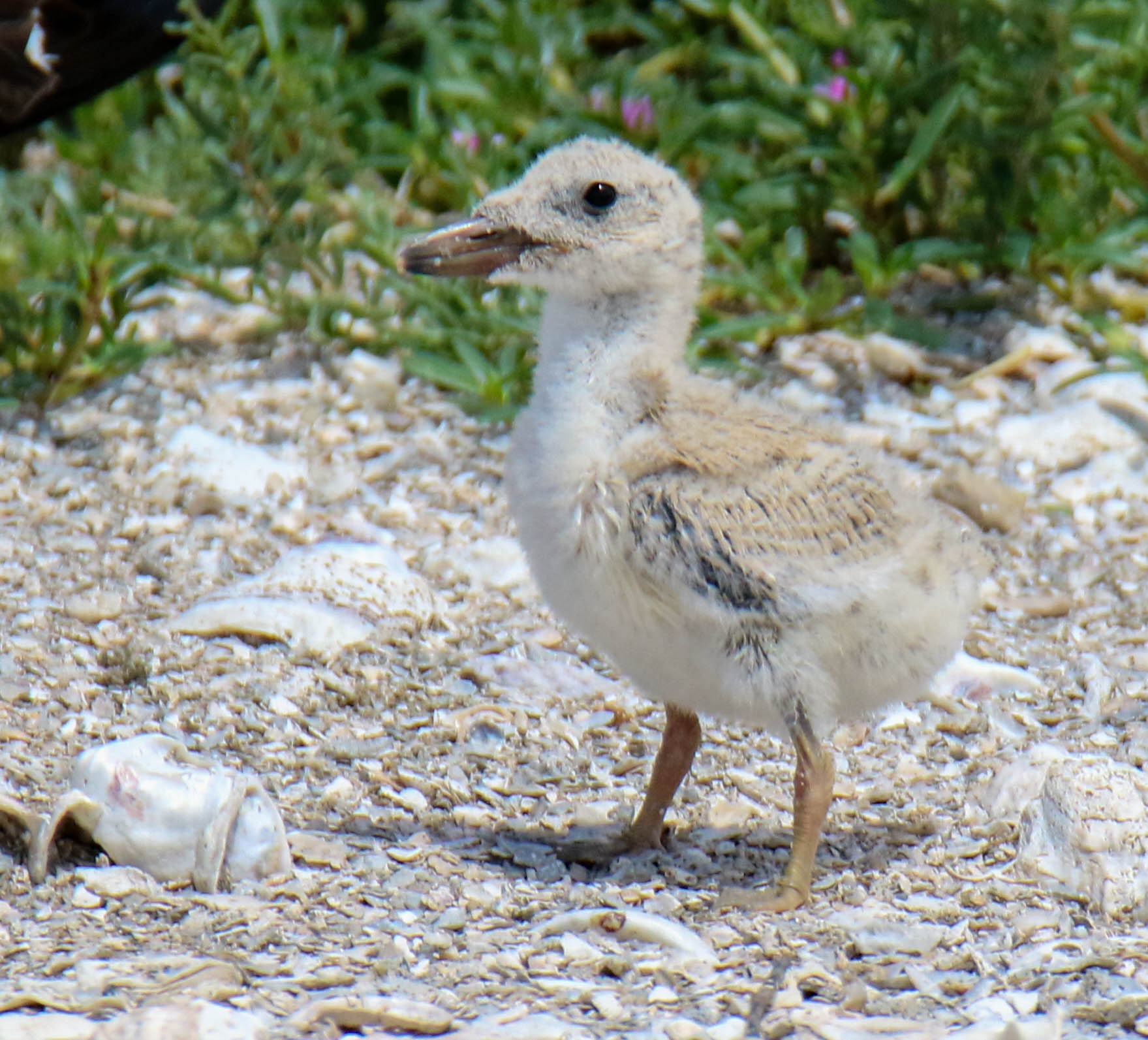 12 & unbanded were on the island without any chicks. One of their chicks had been at 8 Mile Road and we found the other one on a dock so I guess they aren’t wandering too far from home. HM & X7 were on the end of the rock wall. The unbanded pair was on a dock with their chick and LT & JA were on a dock with both their chicks. The entangled one looks the same as last time we saw it. It is still getting around ok but man that foot just looks bad. L9 & unbanded were “on the grassy knoll” as I have come to call it. I’m really wondering if they will try to nest there next year. I sure hope not.

We didn’t need to go up to Swan Lake so we passed on that. The wind had died a bit so we headed back over to see if we could see how many eggs W5 & JC have now. Last week they only had one and this week they still only had one. Talk about putting all your eggs in one basket! W5 was incubating so I told him he was a good man. 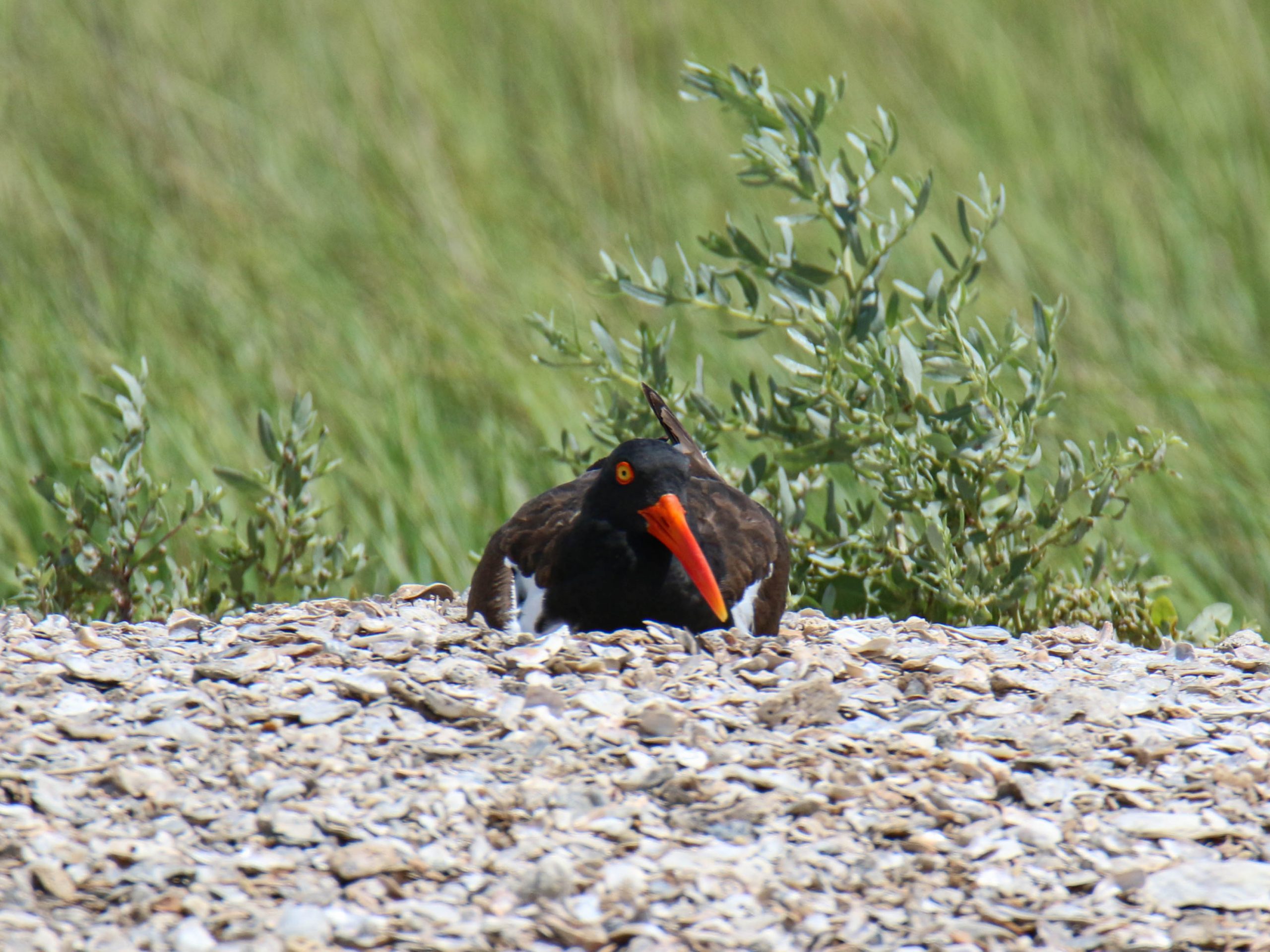 It was beautiful out by the time we finished. Blue sky everywhere. The forecast showed it was going to start raining again in the afternoon but at least we got the survey finished. Thank you Alan for being on the ball!