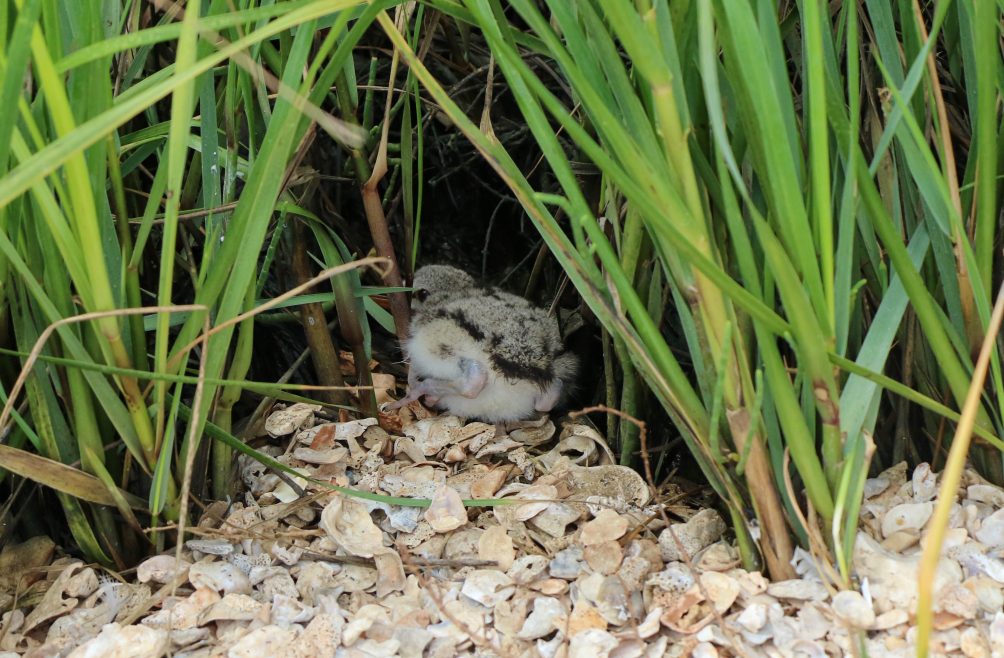 Well I’m happy to say that it finally stopped raining! Mostly any way. Alan and I headed out on Thursday accompanied by Elizabeth and Elisha Hehir, graduate students at the University of Houston Clear Lake. They are very interested in birds and are going to take over maintaining one of my Motus towers. Yay! Thank you Elizabeth and Elisha! They were great help on the boat too as their young eyes spotted several birds that Alan and I missed.

We headed out the Tiki Channel and spotted a bird on the reefs there right away. It turned out to be E1A, an adult we banded earlier in the year in Jones Bay. We haven’t seen it for a while so it was good to verify it’s still around and doing fine. We headed up to Swan Lake to see if we could get a resight on X3 & unbanded and their chick for July. Fortunately the whole family was on the breakwater and Alan snapped a great photo of the chick. 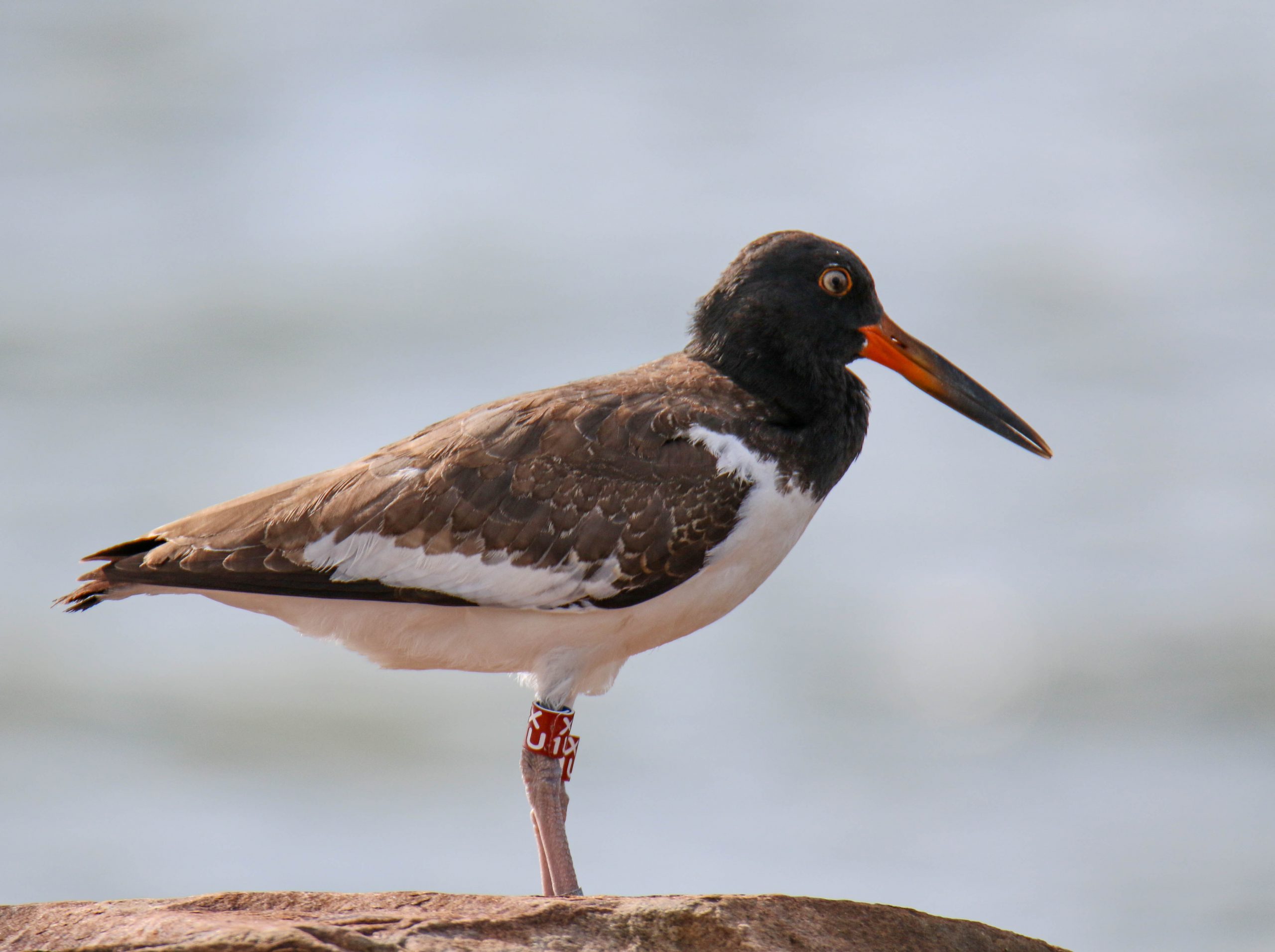 We found everybody else up there too except 11 & unbanded and LR & unbanded, but we saw them last time we were up there so we already got a resight for them. We headed back to West Galveston Bayt and went to Struve Luci to check on the skimmers. The chicks are getting big! 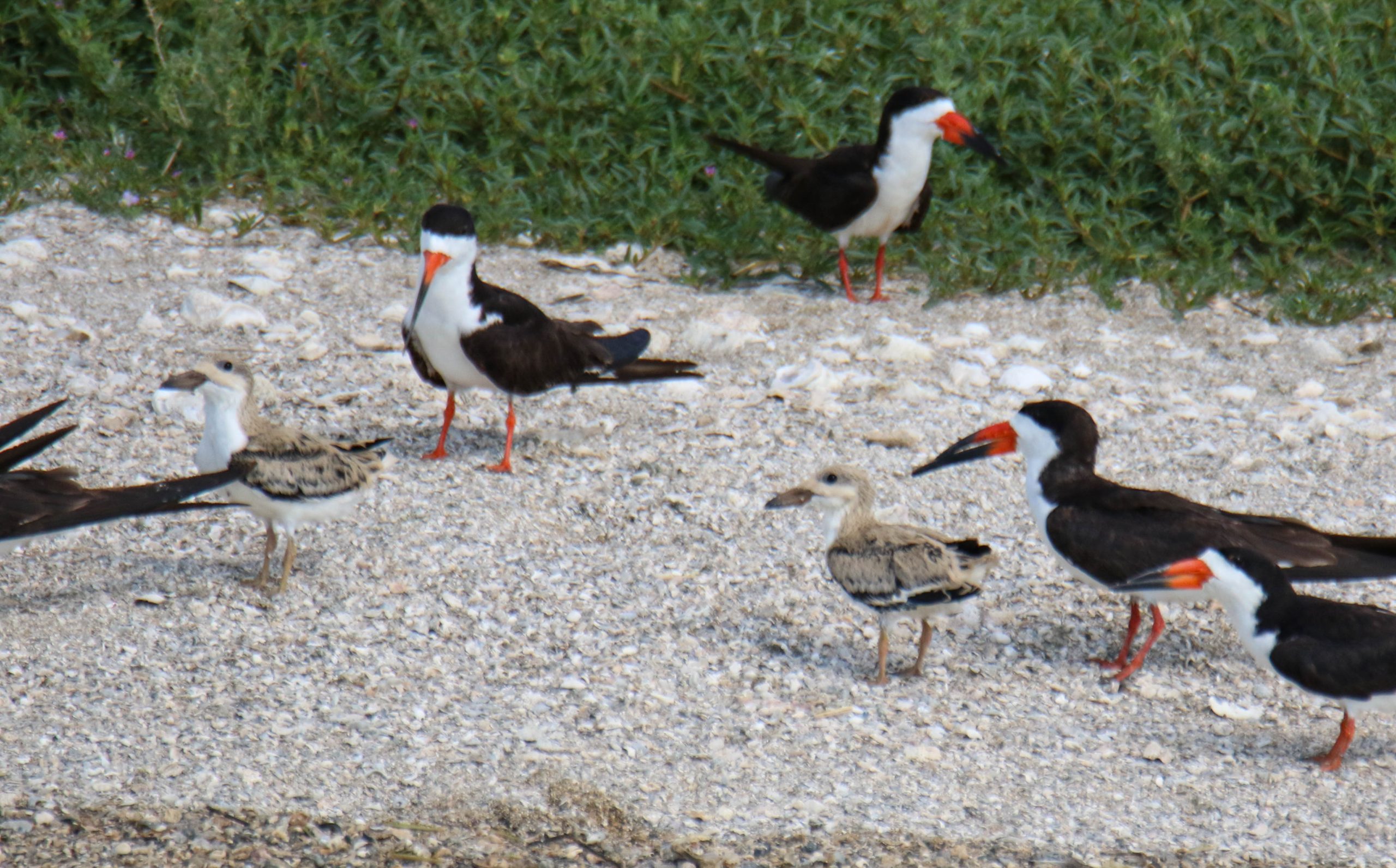 We are planning to band them next week! All the oystercatcher adults were there in their usual spots and we saw a couple chicks too. LT & JA were there with their chick X1W, which is the one with an entangled foot. It had it’s foot in the water though so we couldn’t get a good look at the entanglement. L9’s mate was limping too but we didn’t see any fishing line. Hopefully whatever is wrong will heal itself.

On Jigsaw, both pairs were loafing except LH & JX had an unbanded visitor.

Not sure what that’s about but they didn’t seem very upset about the company. We headed over to Galveston Island and found YK & unbanded on a reef enjoying the sunshine so we moved on to 8 Mile Road. There were birds at 8 Mile Road and birds on the first dock and they moved between the two a few times so it was hard to keep track but I’m pretty sure there 10 total with 8 banded. 16 was there with his unbanded mate but Alan captured this photo of him criss-crossing bills with U7Y. 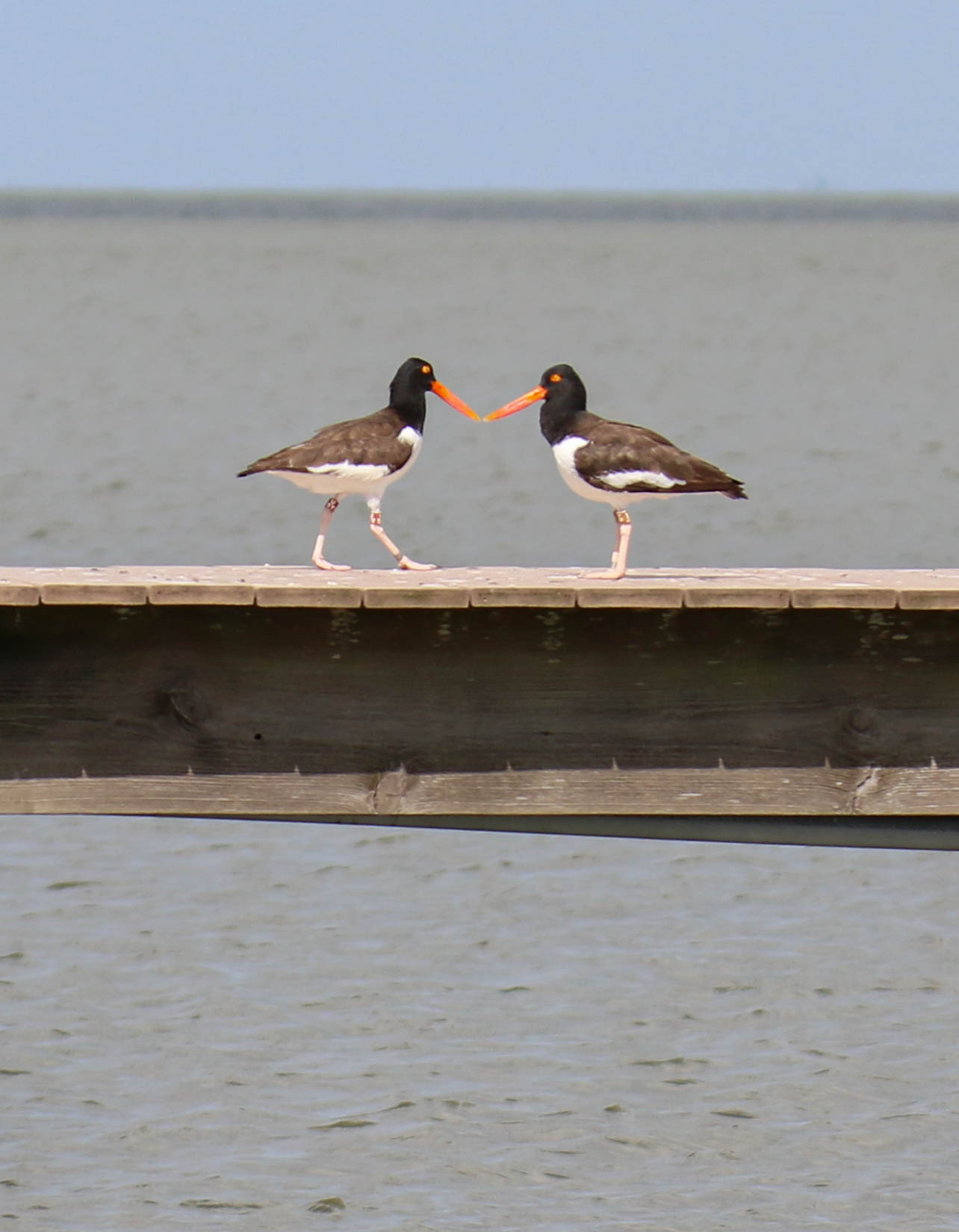 It’s an optical illusion but it looks pretty funny!

We headed to South Deer and didn’t find anything interesting until we got to A1A & unbanded. They were both there and were decidedly unhappy about us barging in so I figured they still had a chick. I went up and looked around and found this! 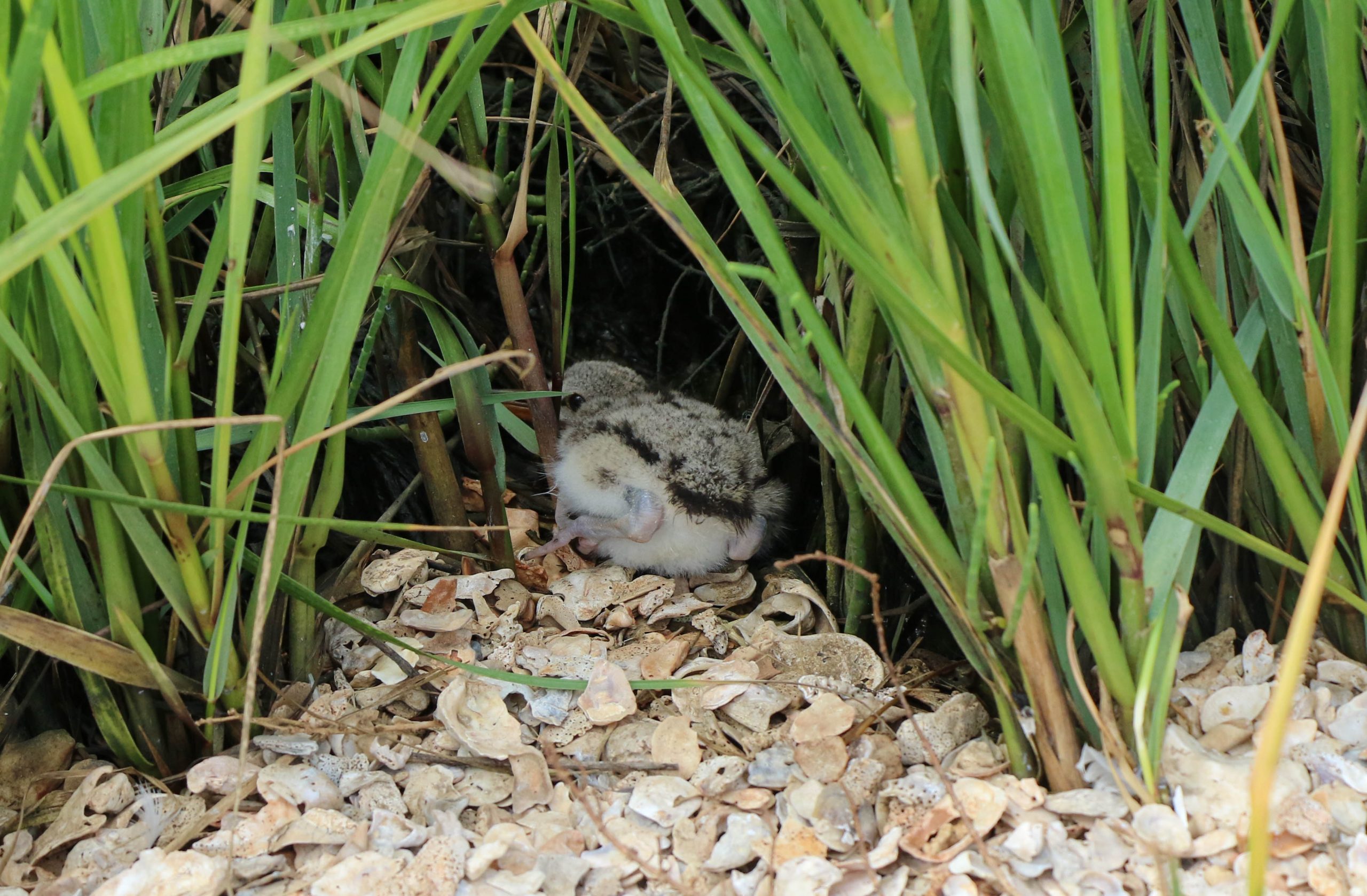 We didn’t touch it and let it think it was hiding sufficiently so it won’t try to hide better when it’s time to band it. Elizabeth and Elisha found the other chick dead along the shoreline. Oh no! I am not sure what happened to it. There were no visible wounds. Sad. Hopefully the live one will make it though. The Royal Tern chicks are about to fledge! 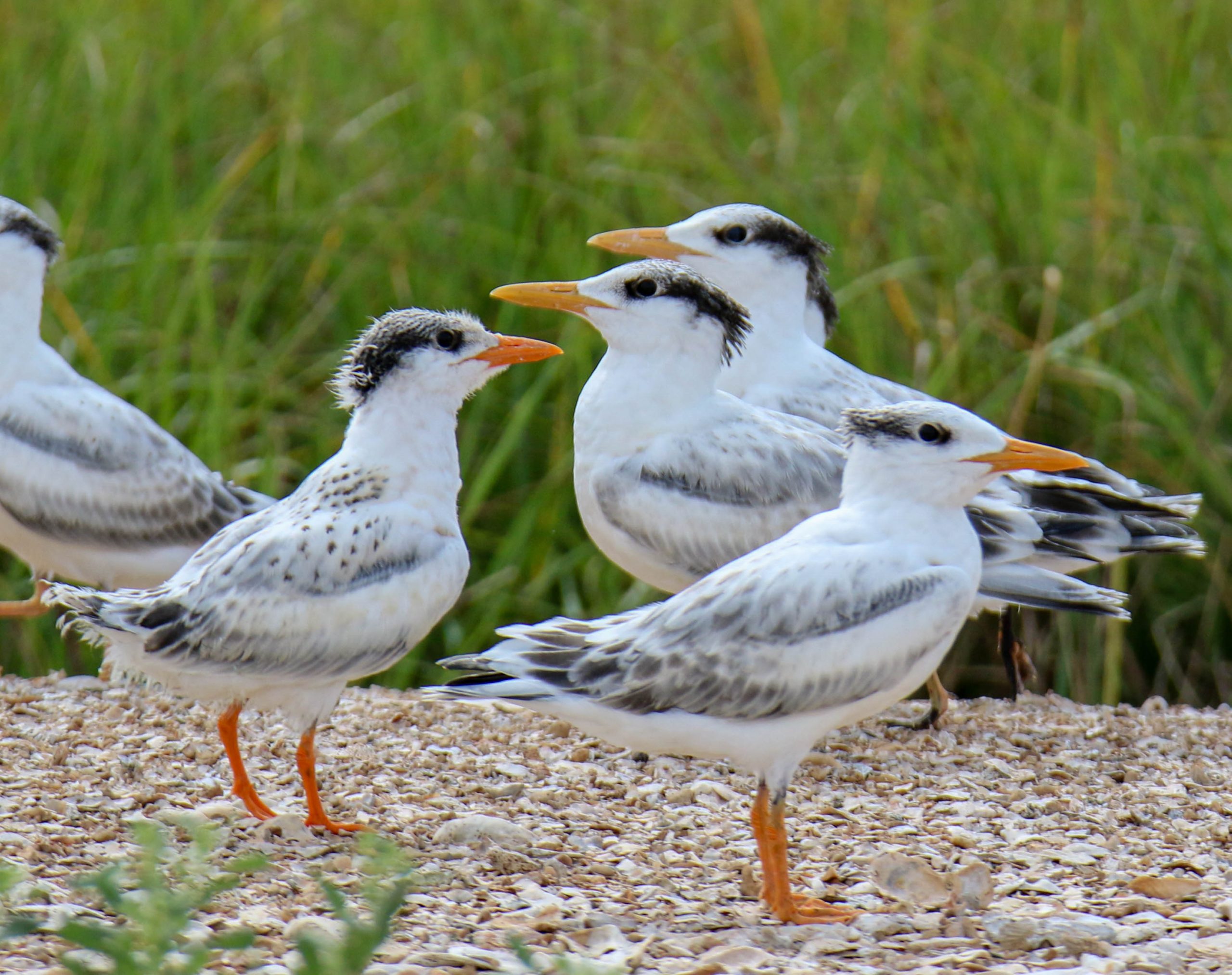 We checked the Gangs Bayou breakwater and found A5A & unbanded and A4A & unbanded so we headed across the bay. I had hoped the Brown Boobies would be back but they weren’t. I miss them!

I hadn’t really intended to go to Greens Cut but I saw a large crane looking thing over there so I wanted to check it out. We got a surprise when we got there. F9A was hanging out on her island with W1W. We haven’t checked on F9A in a long time so I’m not sure how long that pairing has been in place. It will be interesting to see if it sticks. The crane like thing turned out to be a large backhoe on a barge full of large rocks with several other barges of rocks alongside. 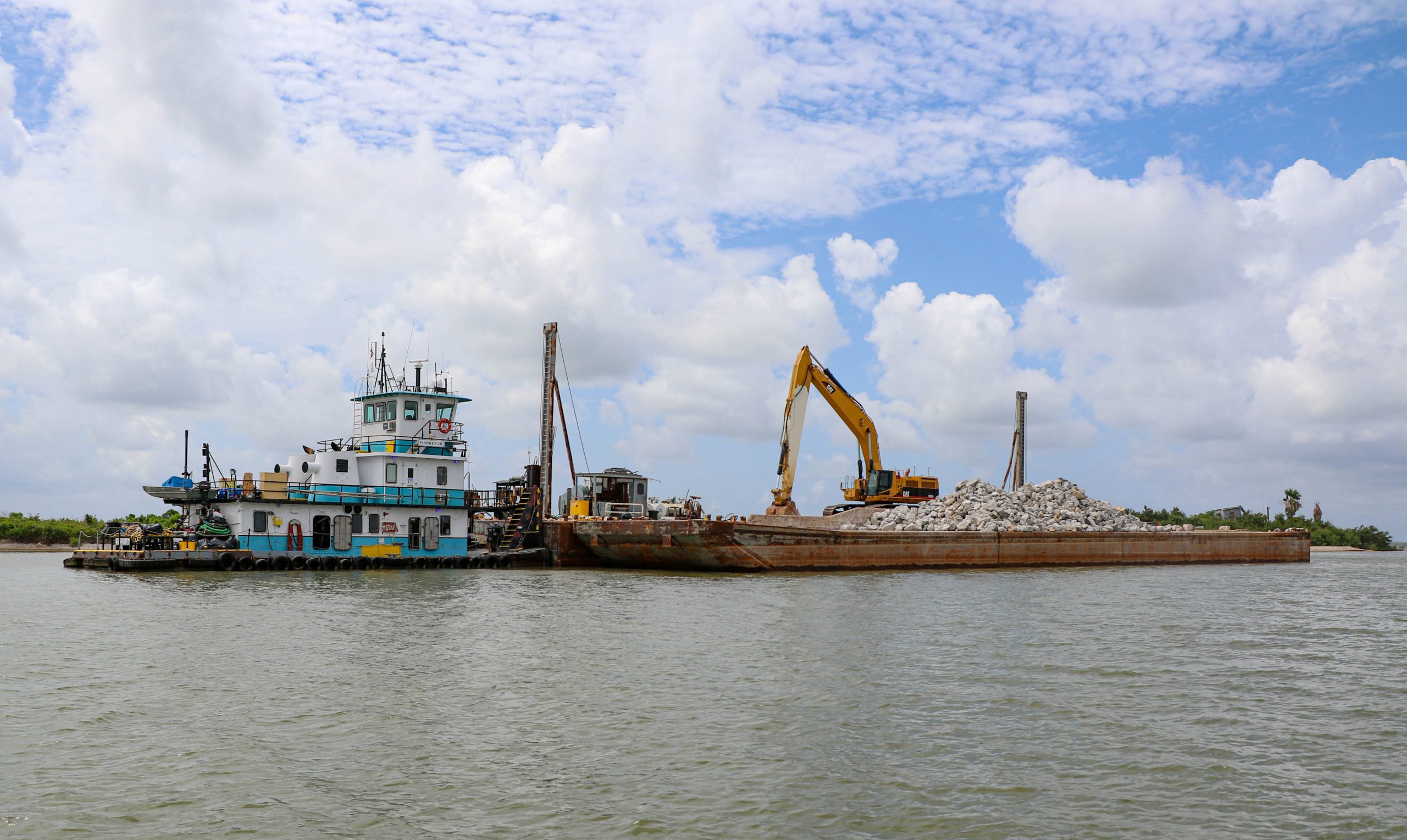 I guess they are building a breakwater to stop erosion at Greens Cut. We headed back up the GIWW to North Deer and found YM & JH and their chick in their same old spot so we went to check on C1A & unbanded. We only saw C1A at first but he started calling when he spotted us and his mate popped up from somewhere. I didn’t see where and I wish I had because that’s probably where the chick was hiding. We looked around a little but we didn’t find it. I didn’t want to bug them for long so we left them be. It will be time to band that chick in two more weeks. Can’t wait!

We found J6 & UF back on their island instead of on the breakwater. It wouldn’t have surprised me one bit if they’d turned up with a chick but they didn’t. We ran the length of Marker 52 and found that W5 & JC were still incubating their one egg! I will be amazed if that nest makes it and even more amazed if they fledge a chick. Time will tell!

We went to check on CA & Y2 and their chicks but we got distracted by a very plump and cute Caspian Tern chick. It was moving around and hiding and Alan wasn’t able to get a good photo but you get the idea. 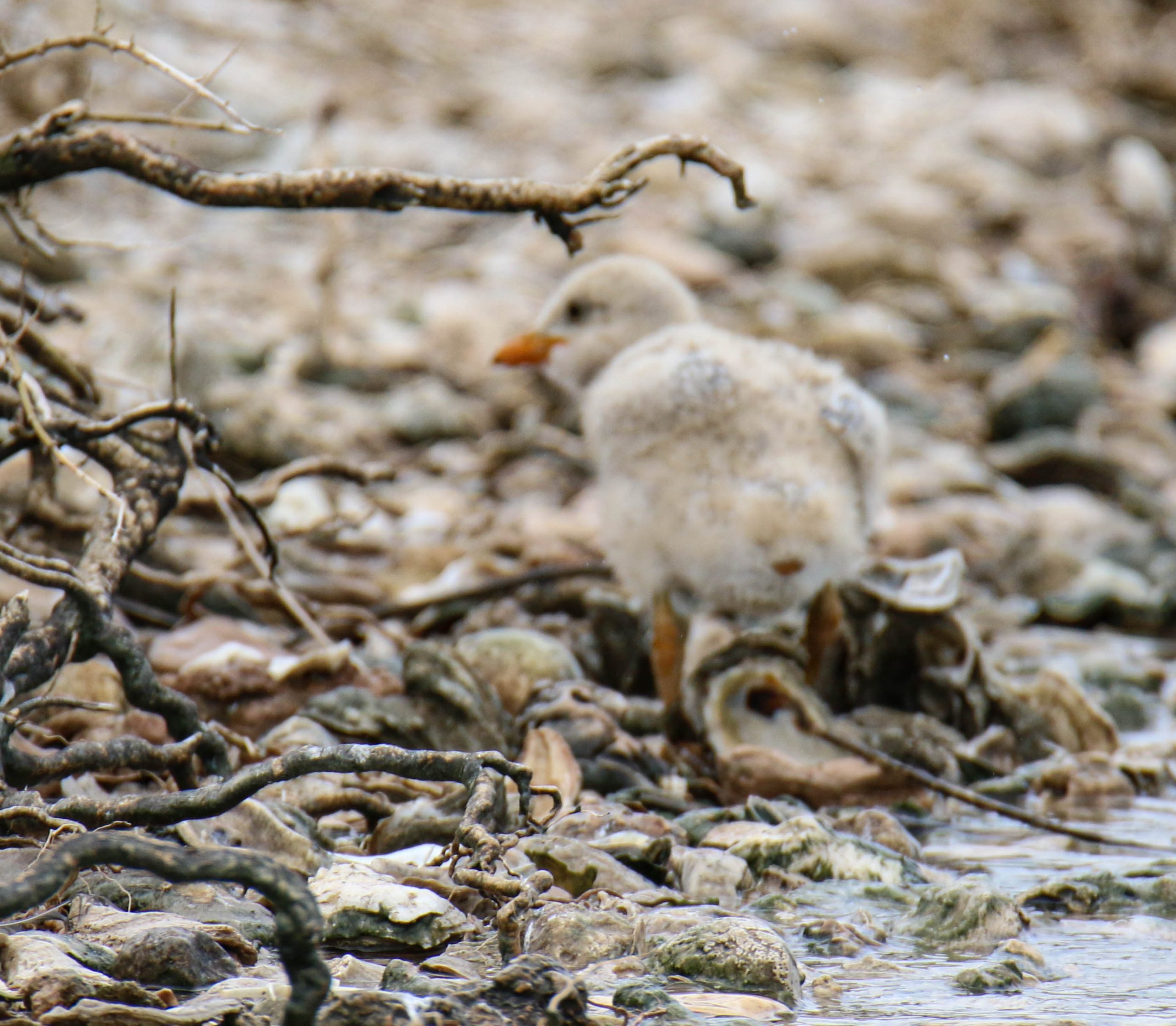 When we looked up from the tern chick, CA & Y2 and both their chicks were there. Perhaps they were annoyed we were paying more attention to the tern then them!