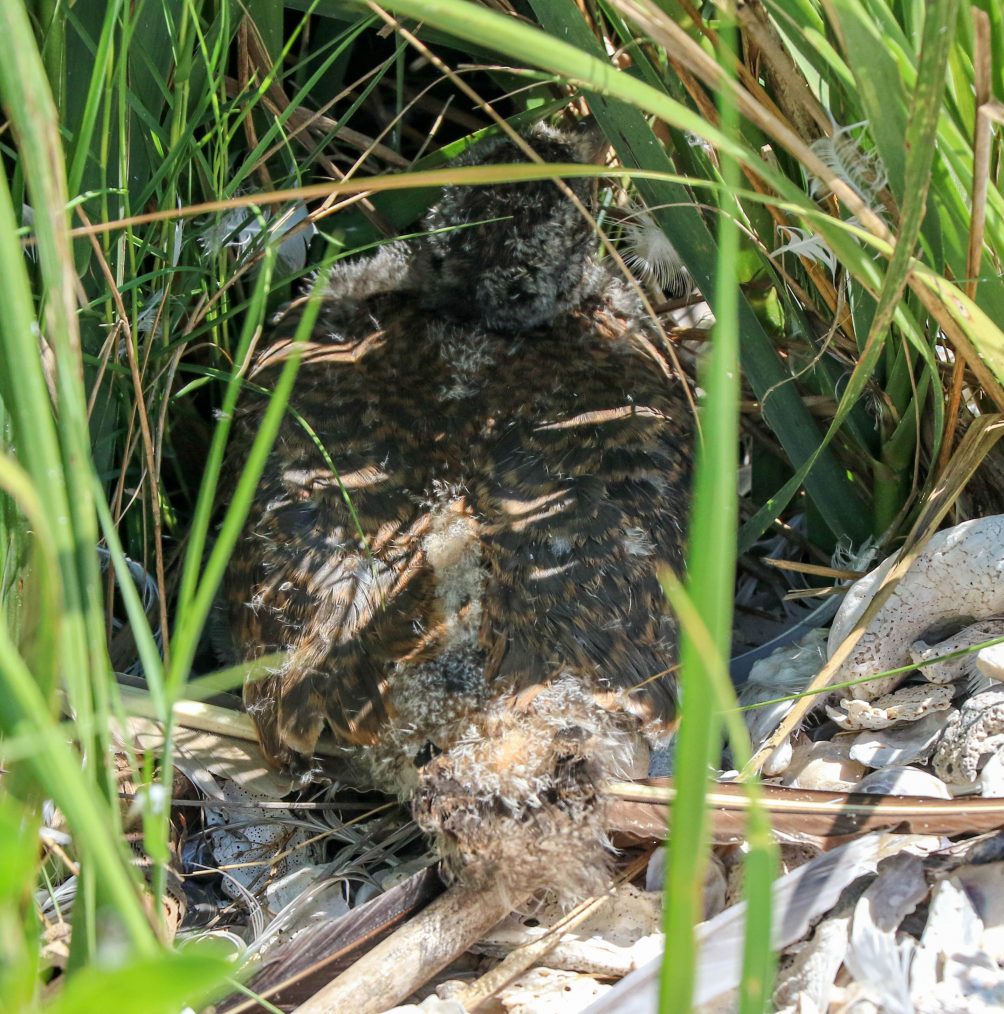 This week the skies were clear on Thursday for our check of West Galveston Bay. Alan and I were accompanied by GCBO’s current RV hosts, Sonny Brannon and Peggy Hall. They have been a great help around GCBO so I wanted to show them a little bit about what happens out in the field on a research day.

Since we hadn’t been up to Swan Lake in August and the wind was mild we headed up that way first. Nothing exciting happening up there but we found a lot of the banded birds so we could get an August resight on them. 20 was on his island alone and LR & unbanded were not home. We were buzzed by a pair just after we checked on LR & unbanded but given the direction they came from, I suspect it was 11 & unbanded. They did not circle back to give us a conclusive id. X3 & unbanded were on one of the breakwaters and their chick was a little way down from them. 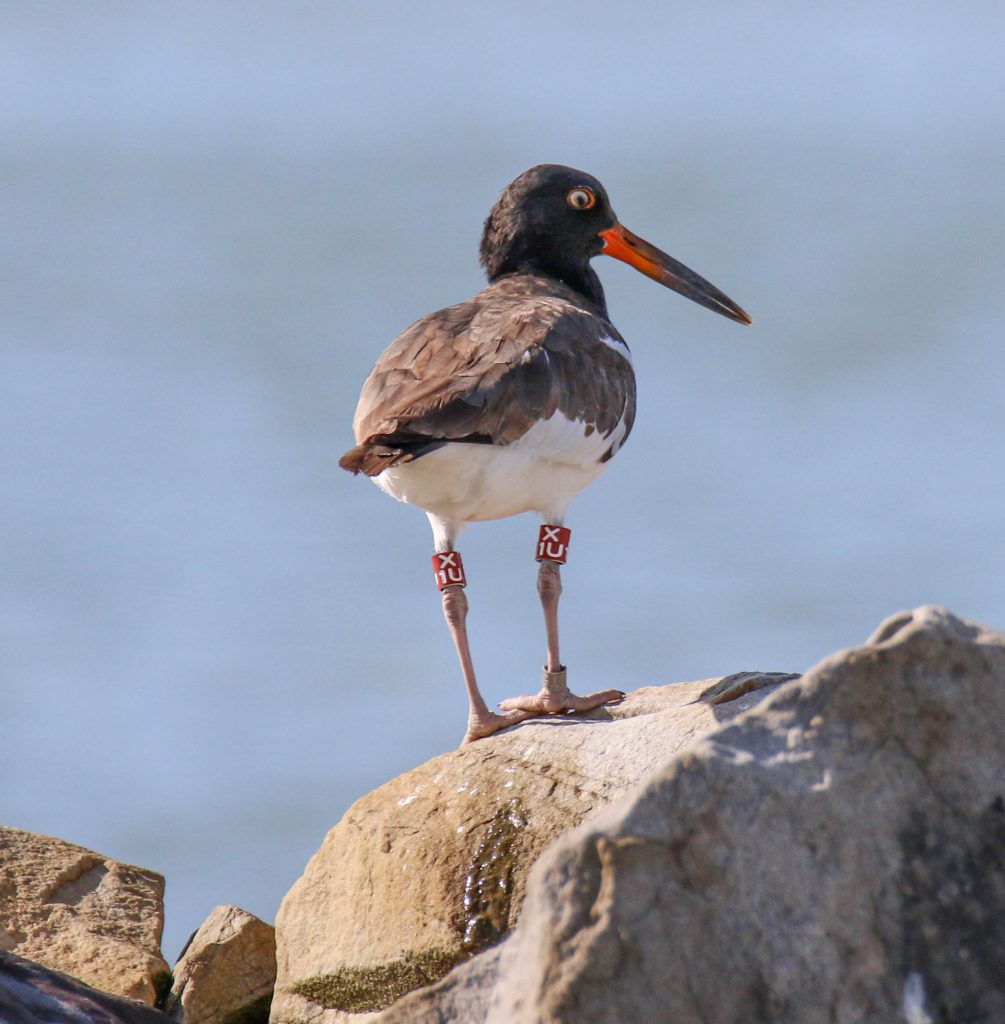 That chick is looking pretty good!

We also found K7 & unbanded on a breakwater and in the spot where 39 & unbanded should be we found an unbanded pair. Hum. Did something happen to 39? Only time will tell.

We headed back down to West Galveston Bay and went to Struve Luci to check on the skimmers. Alan had brought his C02 net gun just in case we got a chance to capture the entangled oystercatcher chick too. The skimmers were very spooky and we had to circle around several times before they settled down and I could video them to count later. There didn’t seem to be very many birds on nests which was odd because there were a lot the previous two weeks. I counted 37 fledged chicks and only two smaller ones. Something wasn’t right so I decided to go on the island to see if there were still nests. I found only two nests with eggs and two nests with just hatched chicks. 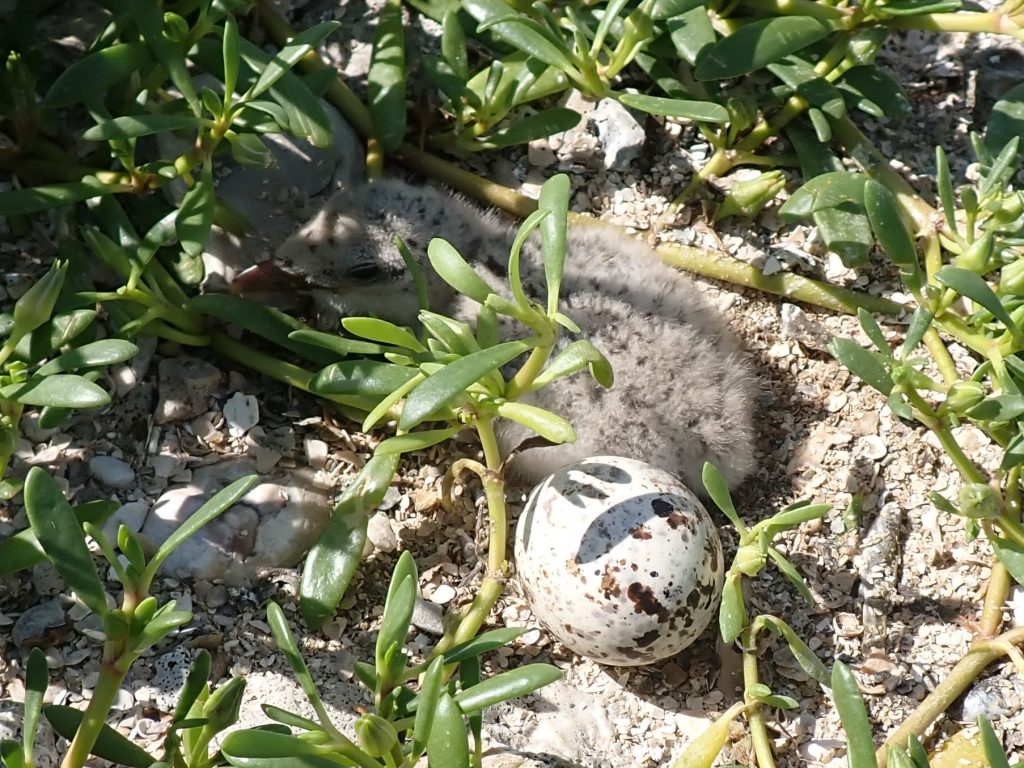 What happened to all the nests? There were 34 last week. I have no idea. I saw one chick hiding under an adult.

And there was little cute little thing. 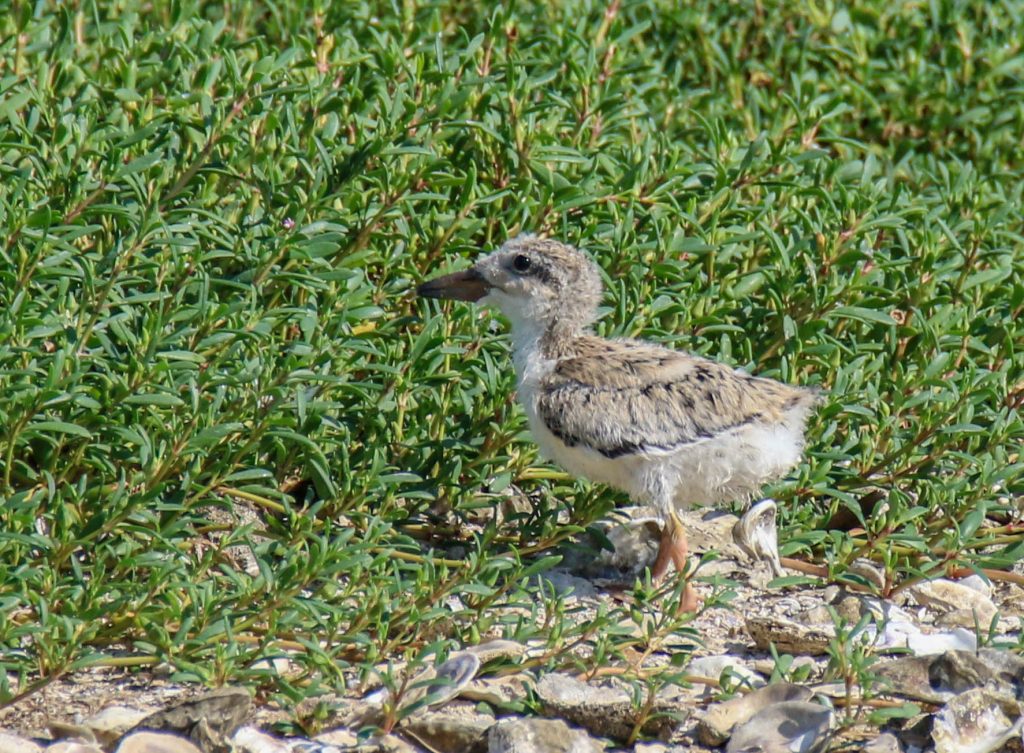 I found one chick that was big enough to band but that was all. Skimmers are just a mystery! I also noticed an adult that seemed to be injured so I went over to grab it and saw that it had an oyster clamped down its foot! What the heck? I’ve never seen anything like it before. 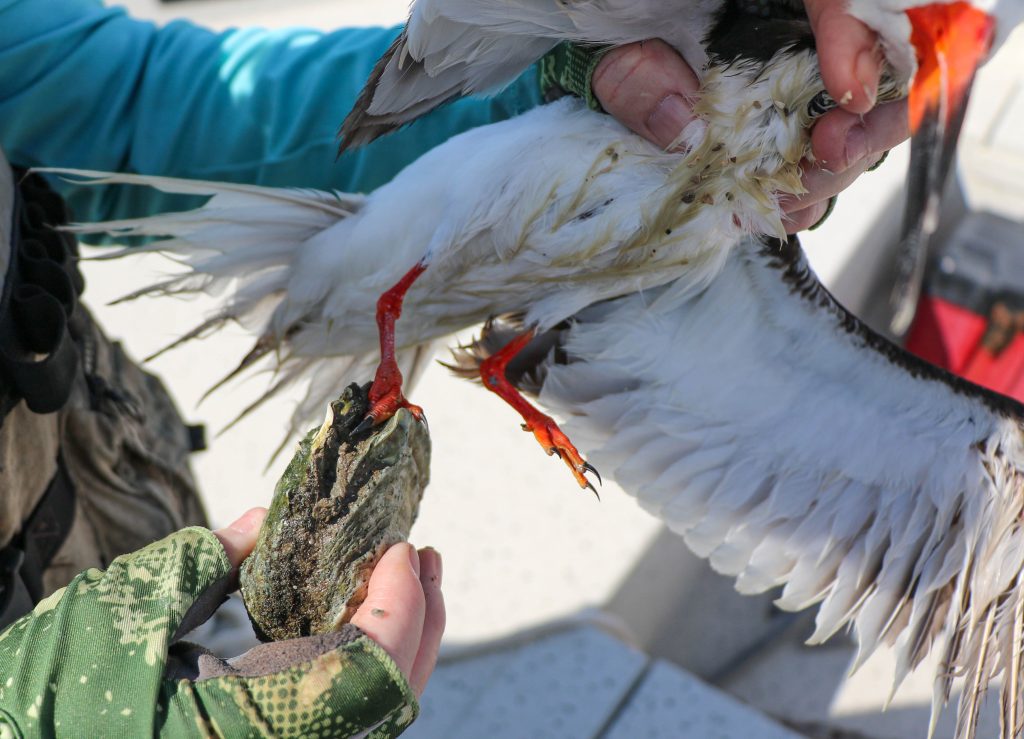 We tried prying it open with my knife but it wouldn’t open so we took it back to the boat and Sonny used a hammer to shove the knife blade down into the oyster to open it. Once free, I wasn’t sure if the skimmer would need to go to rehab or not so I set it on the ground to see what it would do. At first it didn’t realize it was free but once it did, it took off and I lost it in flight amongst all the other birds. I guess it was good to go!

We banded the skimmer that was big enough. 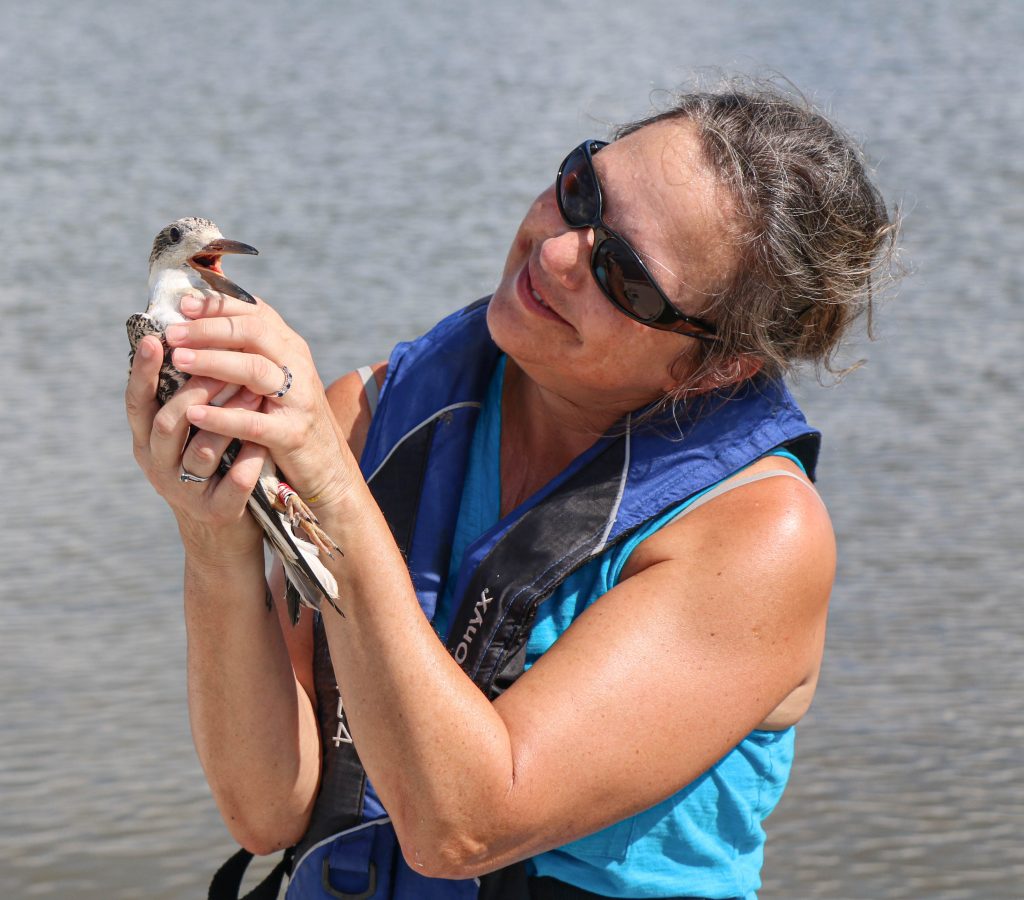 Then we tried to catch the entangled oystercatcher chick but as usual it wouldn’t let us get anywhere near close enough. That poor bird. I really want to help it! 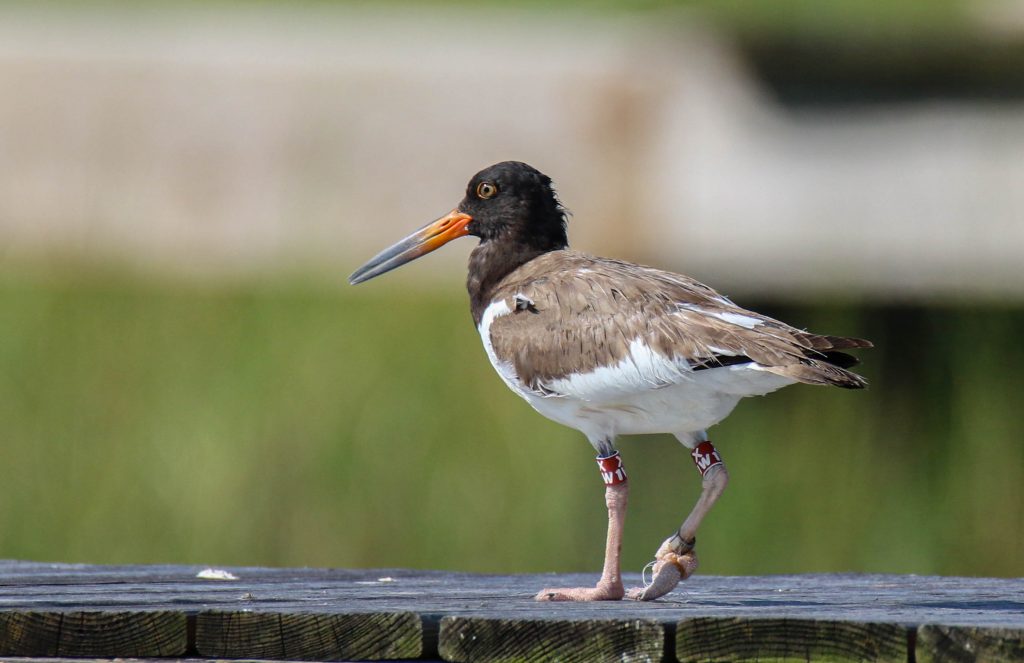 We made our way around the bay checking on everyone that was home. There was a big bunch of birds at 8 Mile Road but they flew before Alan could photograph many of them. He did manage to get a handsome photo of 16. 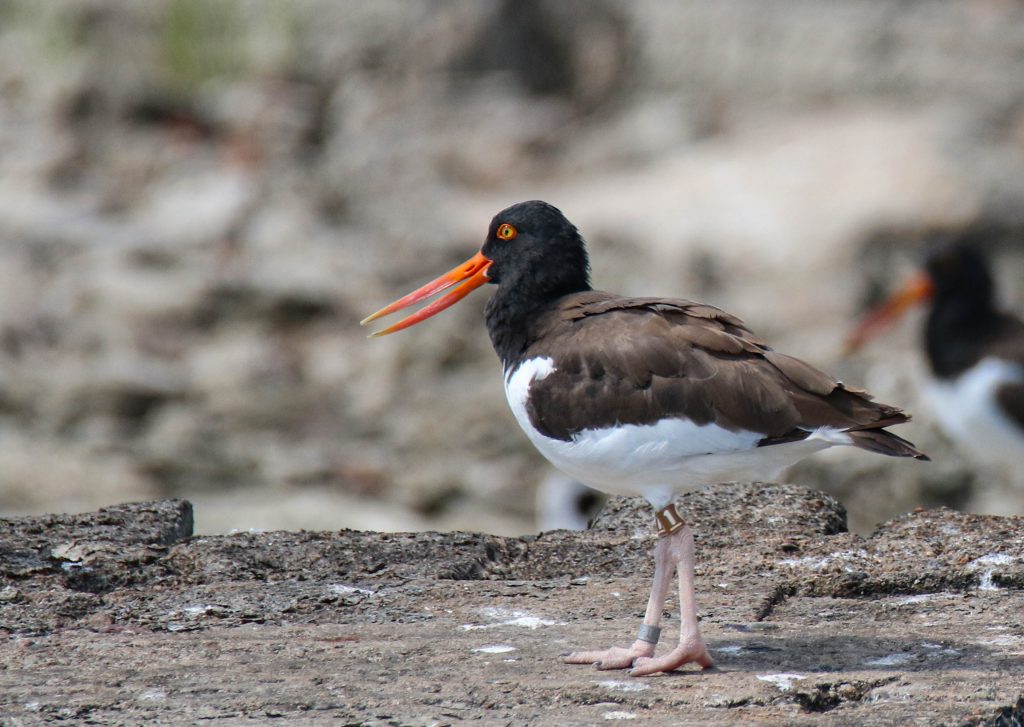 We made our way over to North Deer to check on C1A & unbanded and their chick Y8Y but they weren’t home. Y8Y should be able to fly quite well by now so I guess they were off exploring.

I had high hopes for W5 & JC’s chick and I was not disappointed. They were standing in their usual spot and the chick, looking quite big now, was down from them a bit. When it saw us, it ran and hid along the edge of the spartina. That’s what it should have been doing all along instead of hanging out on the water’s edge in full view of every predator on earth. Sheesh. Anyway, Alan snapped a few photos of it hiding but we didn’t get too near so it wouldn’t realize we’d found it. I don’t want it to think it needs to hide better because next time we go out, it will be time to band it. 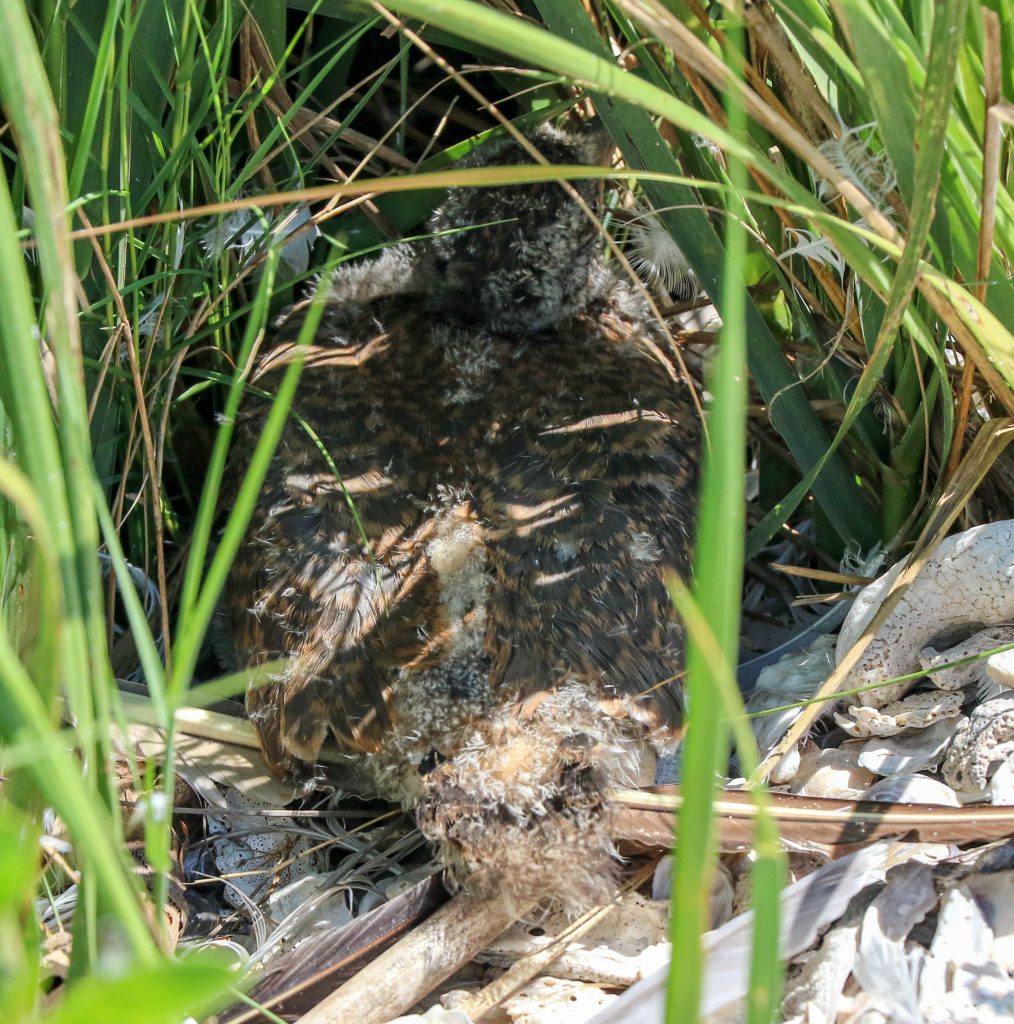 We finished our rounds with CA & Y2 who were on their island with one of their chicks. The Caspian Tern chick there did not swim this week to get away so I figured that meant it could fly. Sure enough it took off when we got close. 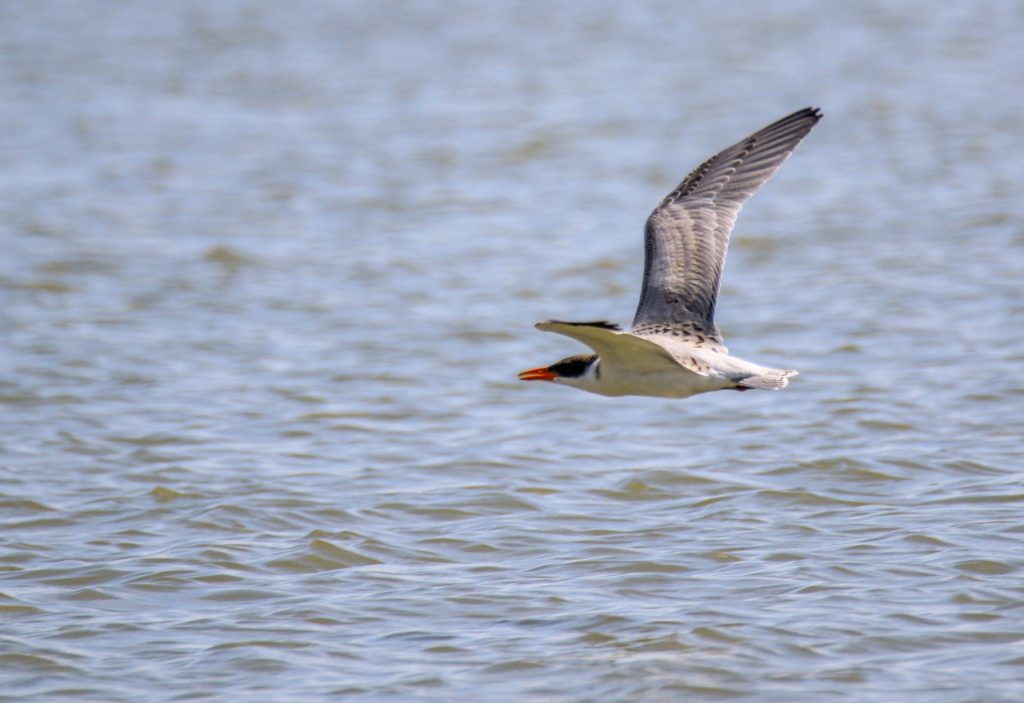 Yay! We enjoy seeing all chicks fledge even if they aren’t oystercatchers. We headed to the boat ramp.

When Alan reviewed his photos he discovered that he got a photo of banded adult Black Skimmer! An adult! Turns out it is J34, a bird we banded as a chick in 2019 on that very island. That shows they do come back to their natal colony to breed! At least some of them do any way. 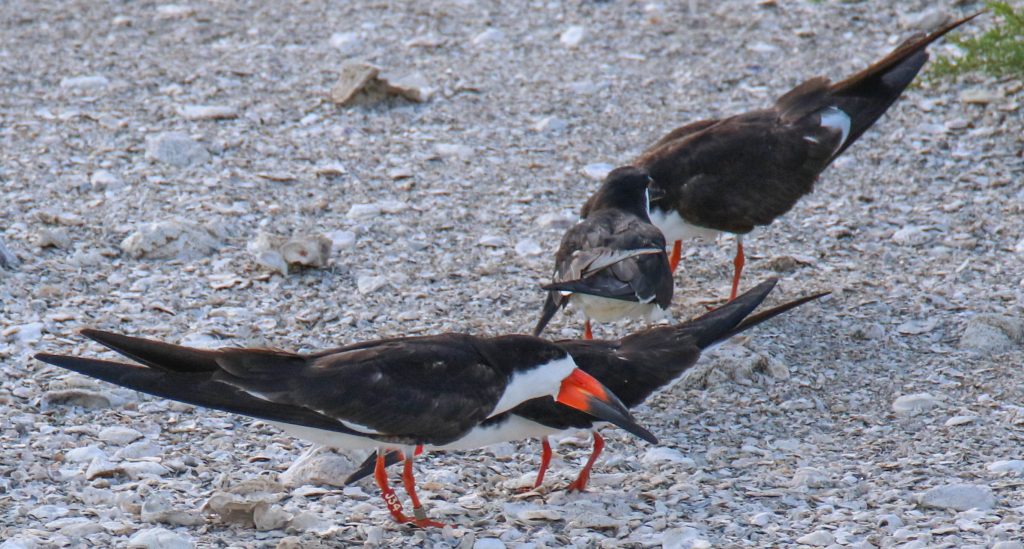 Note: All trapping and banding for this project is in accordance with federal and state permits issued to Susan Heath, GCBO Director of Conservation Research. Bird handling by volunteers is only permitted in the presence of Susan Heath and volunteers are trained in proper bird handling