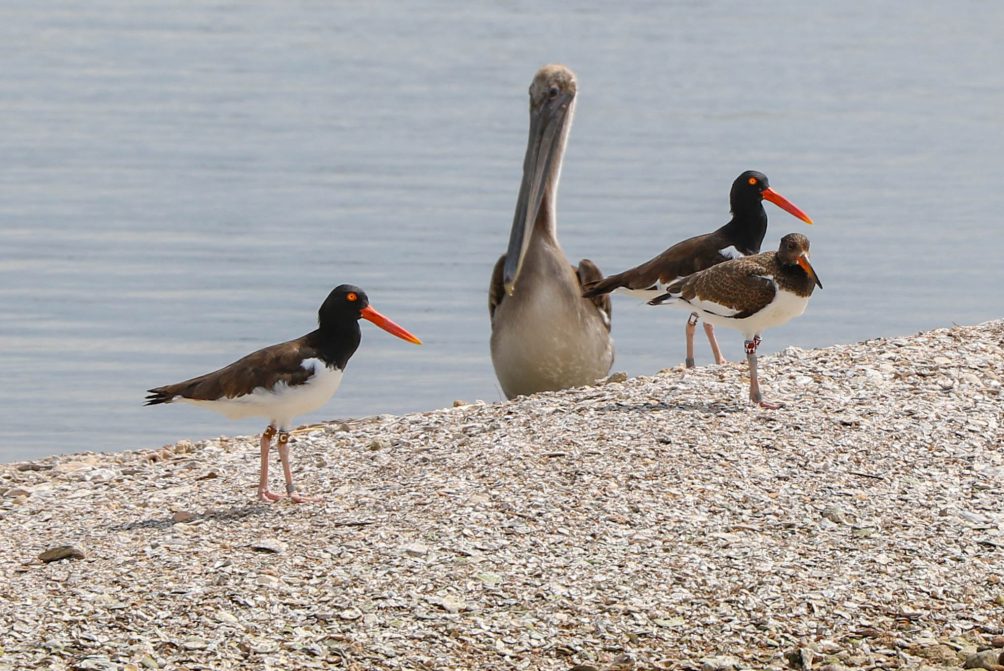 Well it was quite a day. I managed to forget my binoculars so we stopped by Alan’s house on the way out to Jones Bay and I borrowed a pair. So nice to have a volunteer living right on the bay! We found zero oystercatchers in Jones Bay and not much else either. When we went along Marker 52 to check on W5 & JC’s chick we found that they were not home! Dang. I was sure that this meant the chick could fly and they were off exploring somewhere but I wanted to see it fly! We decided to return later after we’d finished everything else and see if they had returned.

We found JJ & P4, YM & JH, and J6 & UF all in their respective territories lounging the day away. It must be pretty nice to be an oystercatcher this time of year. The work is done and you can just relax in the sun all day once you get your belly full.

C1A & unbanded and their chick Y8Y were on their beach too. This was when Alan discovered that his camera was acting up. He couldn’t get it to focus. He fiddled and fiddled with this and that but it just wouldn’t work so we moved on. We spotted a single bird in E6A & unbanded’s territory. We haven’t seen them for ages and the tide was high enough to go closer so off we went. Unfortunately when we did the masses of pelicans flew and that caused the oystercatcher to fly too. So we still haven’t seen them in ages!

Alan managed to get his camera working so went back and got some photos of C1A and chick but then the camera quit again. I was afraid the camera was going in the bay but Alan showed great restraint!

We moved over to South Deer and found only A5A & unbanded at home. The tide was too high for the reefs to be exposed so we checked the docks. Somehow A5A & unbanded had gotten over there before we did! Little sneakers. They didn’t like our intrusion and flew off calling and making quite a ruckus and then ended up right back where they started from. Silly birds.

A1A & unbanded and A4A & unbanded were both on the Gangs Bayou breakwater so we headed back up the bay to the end of 8 Mile Road. There were 11 birds there but in my attempt to get close enough to read some bands through binoculars because of the camera not working, I spooked them all and we didn’t get a chance to read any of them!

YK & unbanded were in place along Galveston Island hanging with a bunch of Willets, Marbled Godwits and Black-bellied Plovers. Nice to see the shorebirds coming back! YE & unbanded were on a reef along the backside of Jigsaw but when we got to LH & JX’s territory we discovered three birds. Hum. Y0Y, one of the chicks from South Deer was hanging out with them and they were letting it. Perhaps practicing for next year when they hope to have their own chick? No idea! 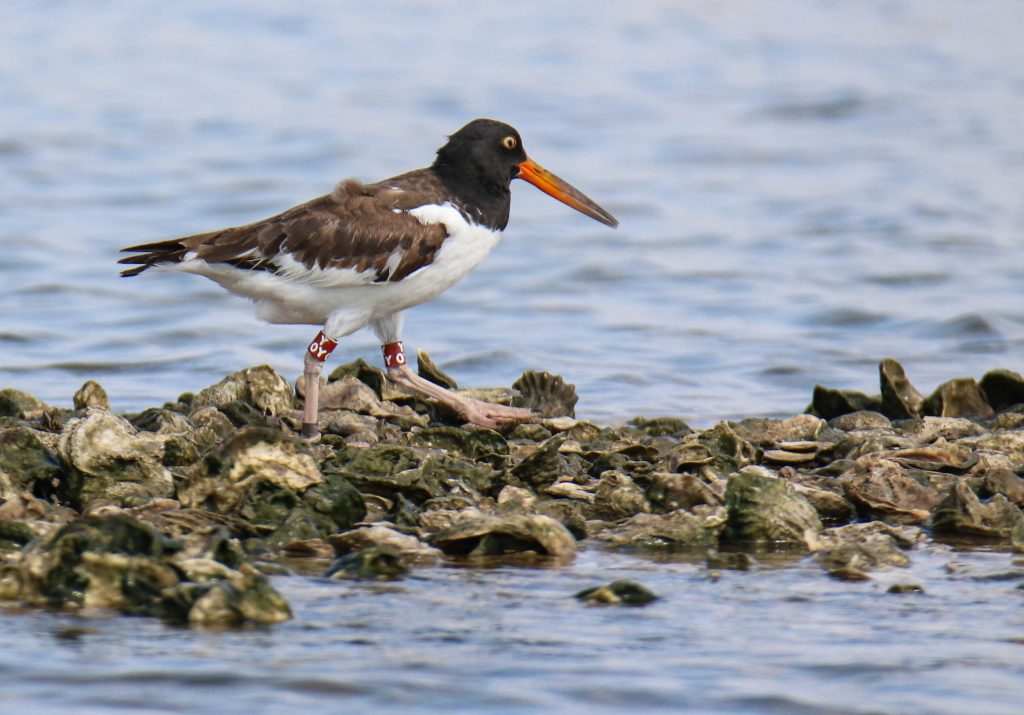 We headed over to Struve. Kevin, my volunteer who lives on Galveston Island and keeps an eye on the skimmers had emailed me that most of them were gone so I was anxious to see for myself. Sure enough I counted only 48 adults and 5 fledged chicks. There was no sign of the small chick from last week that was too small to band. I decided we should go on the island to check for dead chicks but first we checked out the oystercatchers. Most of them were in place and one of 12 & unbanded’s chicks had come back for a visit. The chick from the unbanded pair was on one of the docks with one of its parents too. We did not see X1W the chick that had fishing line on its foot. Since this was to be our last trip out there this year (probably anyway) I figured we would never know what happened to it.
We headed onto the island and Alan went one way and I went the other. I searched and searched for the skimmer chick from last week but I did not find it dead or alive. Alan came back and said he found no dead skimmer chicks either but he found X1W unable to fly! It had jumped in the water to escape him trying to capture it and since he didn’t have a dipnet with him, he was unable to snag it. I figured it would swim back to the island so we grabbed the nets and went looking. Sure enough I found it way down the island hanging with L9 & unbanded. I ran after it and was able to snag it before it got out too deep. 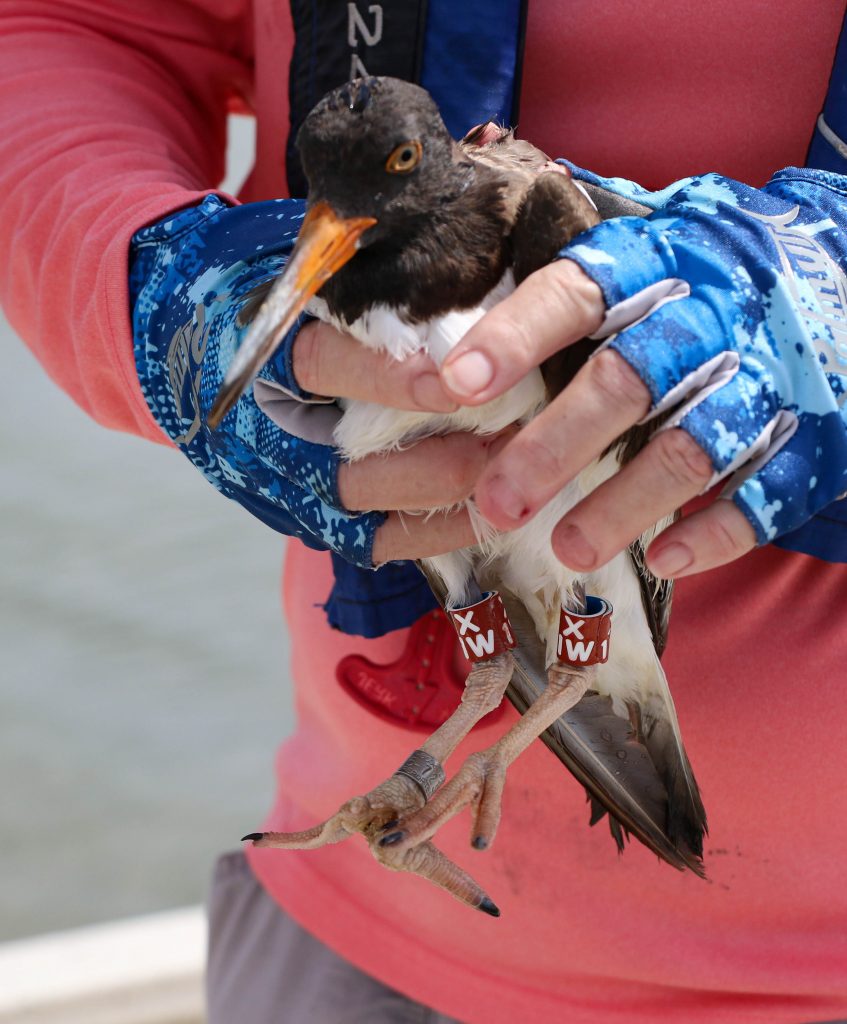 The poor thing’s foot was mangled from the fishing line and it had lost one toe. Amazingly the fishing line was gone. I guess it fell off when the toe went. One of the other toes was pointing in an odd direction and of course the bird was extremely skinny and much smaller than it should be. Poor thing! 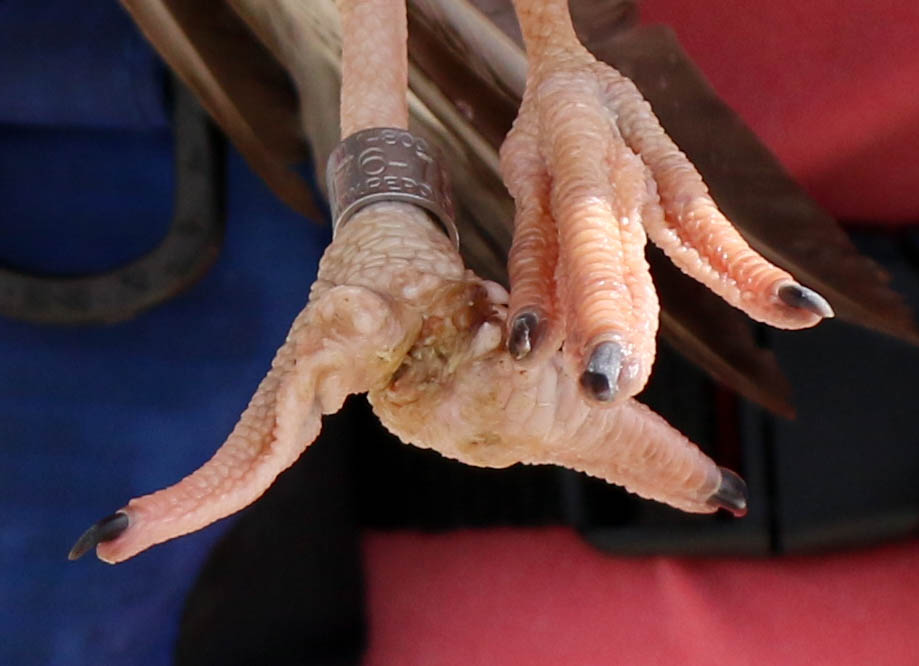 We took it back to the boat and put it in one of the weigh bags and Alan held it while we went back to see if W5 & JC had returned.

Oh happy day! They had returned! The family was standing together along the shoreline. Perhaps through sheer force of will Alan got his camera to work and he got a few photos. 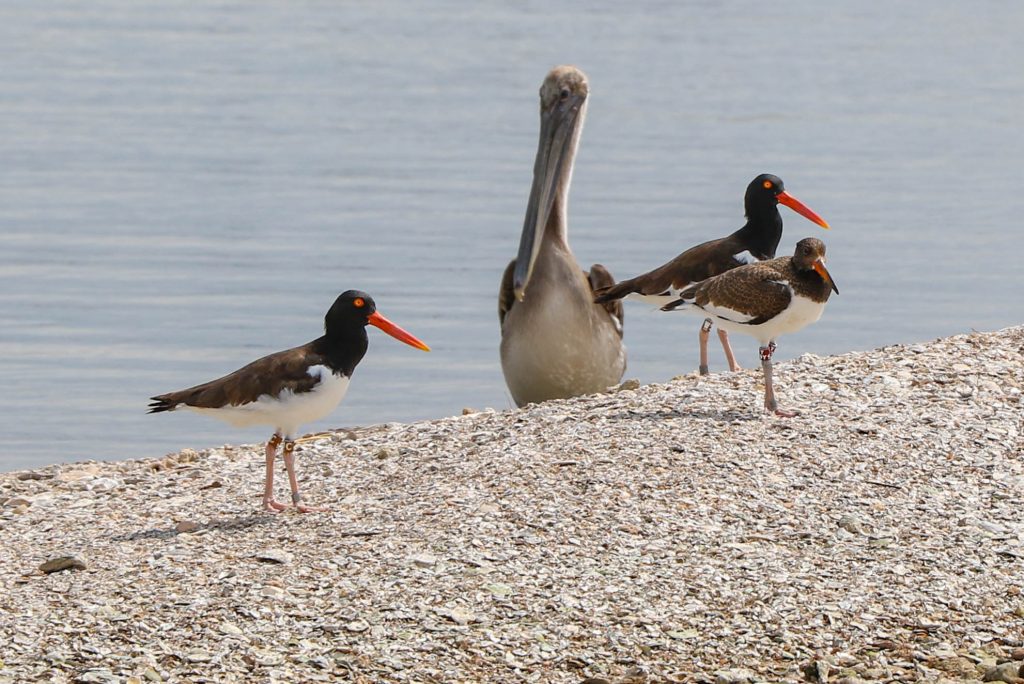 We both really wanted to see the chick fly so Alan got off the boat and took a few steps toward them. That was all it took. The entire family took off and the chick made a fantastic flight out over the bay! Woohoo! That was a great end to the trip and we headed back to the boat ramp after stopping at Alan’s (again!) to get a box for the injured chick.

On my way back to GCBO I took it by and dropped it off with a rehabber. She texted me later that she had given it fluid by tube and some formula and now it was happily eating meal worms from a bowl with water. Such great news! Maybe it will make it. If so we will take it back to the island to let it go so it will know where it is. That will be a great day if it happens!

And so another season comes to an end. This was a long one! Y9Y is the latest chick to ever fledge. 18 chicks total fledged which gives a productivity of .47 this year. That’s about average so not bad!