Alan and I went back out to check on the oystercatchers on Tuesday this week. We had planned to go Wednesday but the weather had other ideas so Tuesday it was. It’s still pretty slow out there but all the pairs are on territory and many are scraping so things should pick up soon. Amazingly all the pairs are the same as last year. None of them switched mates or moved around. I think that might be the first time that’s happened in 12 years of monitoring. Usually at least one female moves to a different male.

We managed to make it up to Swan Lake and I was hoping K7 & unbanded would have a nest but they didn’t. All the pairs were just hanging out on reefs feasting on oysters because the tide was super low. This looks a little suspicious though! 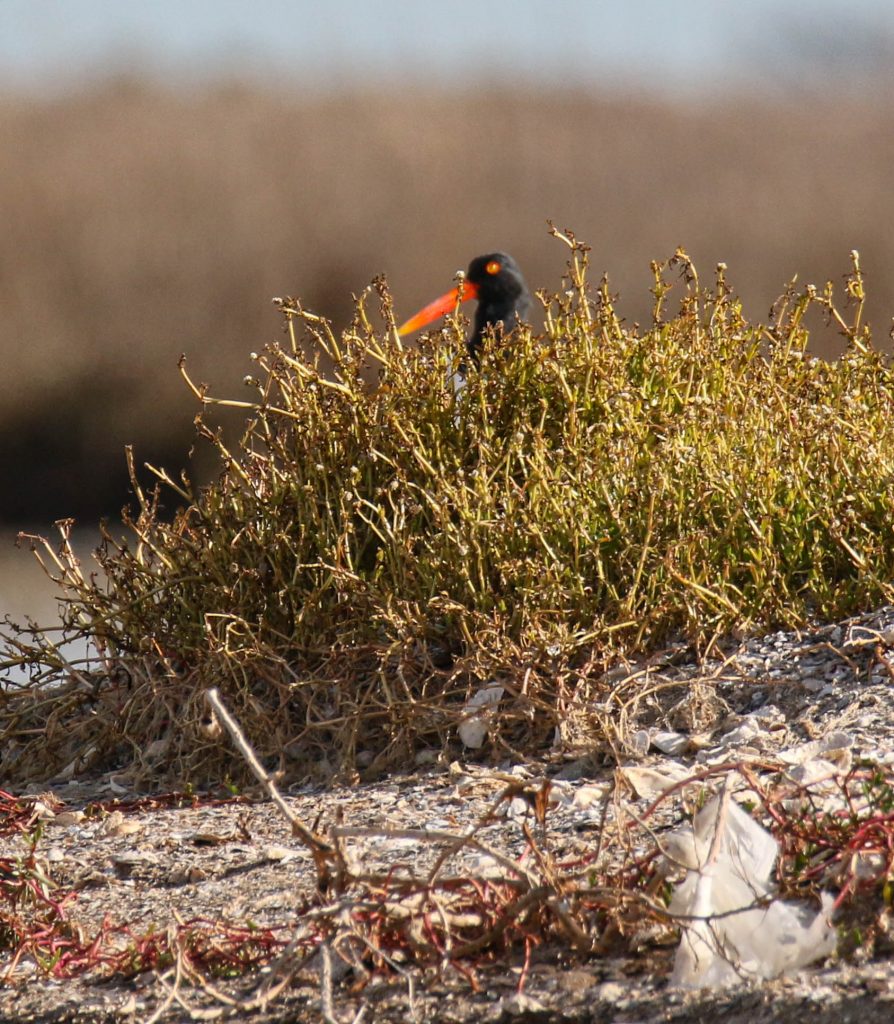 Back in West Galveston Bay, we found a new nest! 12 & unbanded had laid two eggs.

This nest is pretty low so I hope we don’t have any high tides or strong winds that could blow water over the island. I expect they will lay another egg since three is the norm but they start incubating when there are two so this nest should hatch about March 14th. Go 12 & unbanded!

None of the other pairs on that island had a new nest but LT & JA’s nest was still there. Sadly one of the eggs was partially crushed. 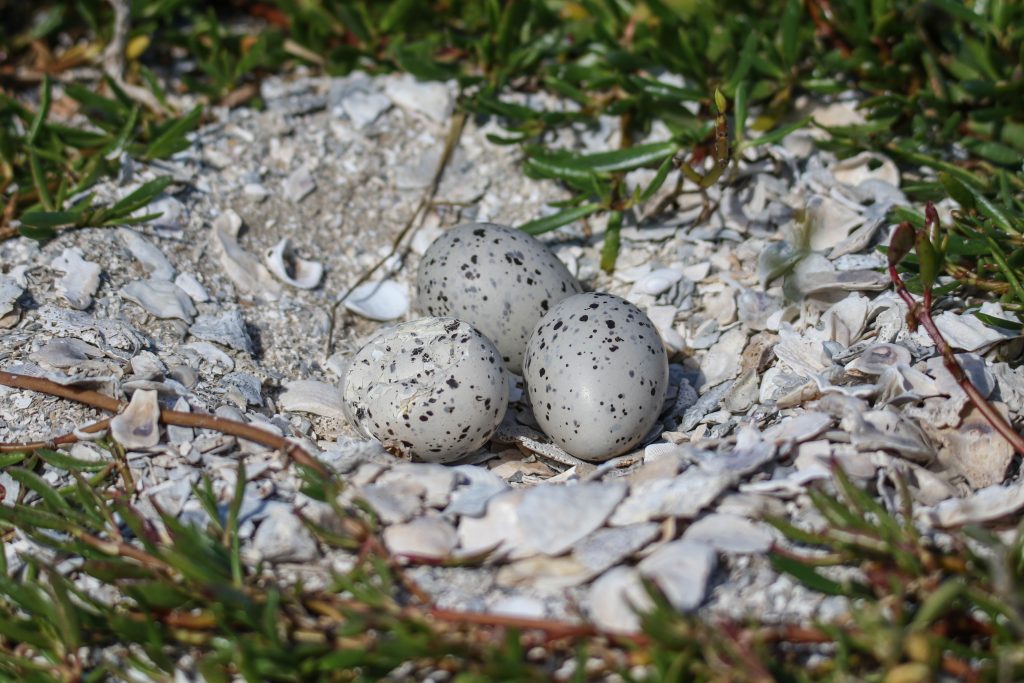 I’m not sure what would have caused that but the other two eggs were warm so they are still incubating them. They should be hatched by next week when we go out again! LT & JA are the best parents. I will enjoy watching them raise their chicks.

We made the rounds to all the other islands. All the pairs were present except the one on the Gangs Bayou island. I think they may have abandoned it but we’ll see. They haven’t had a successful nest in many years since the caracaras started patrolling that area. I love caracaras but I wish they’d get their dinner somewhere else. We saw a caracara perched in a tree on North Deer. The Great Blue Herons are already nesting so I guess the predators are already moving in.

Several times the birds almost fooled us into thinking they weren’t present though. It’s amazing how well they can blend in with a reef. That orange bill gives them away every time though if they turn their head. Can you see the oystercatcher laying down on this reef? 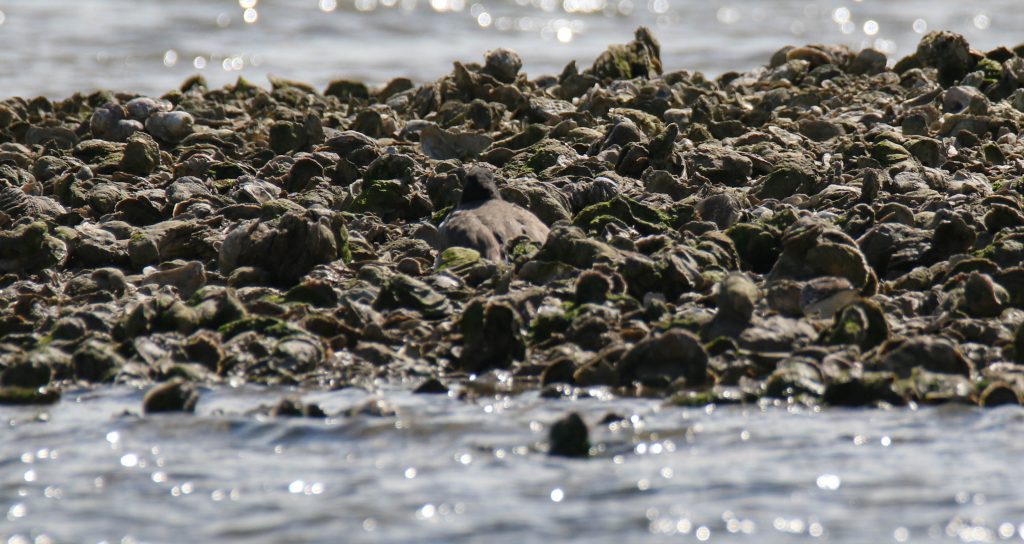 We found a couple gangs of youngsters on the Sportsman Road docks. There were 18 in this group!

Did you know that oystercatchers can levitate? Apparently A1A can! 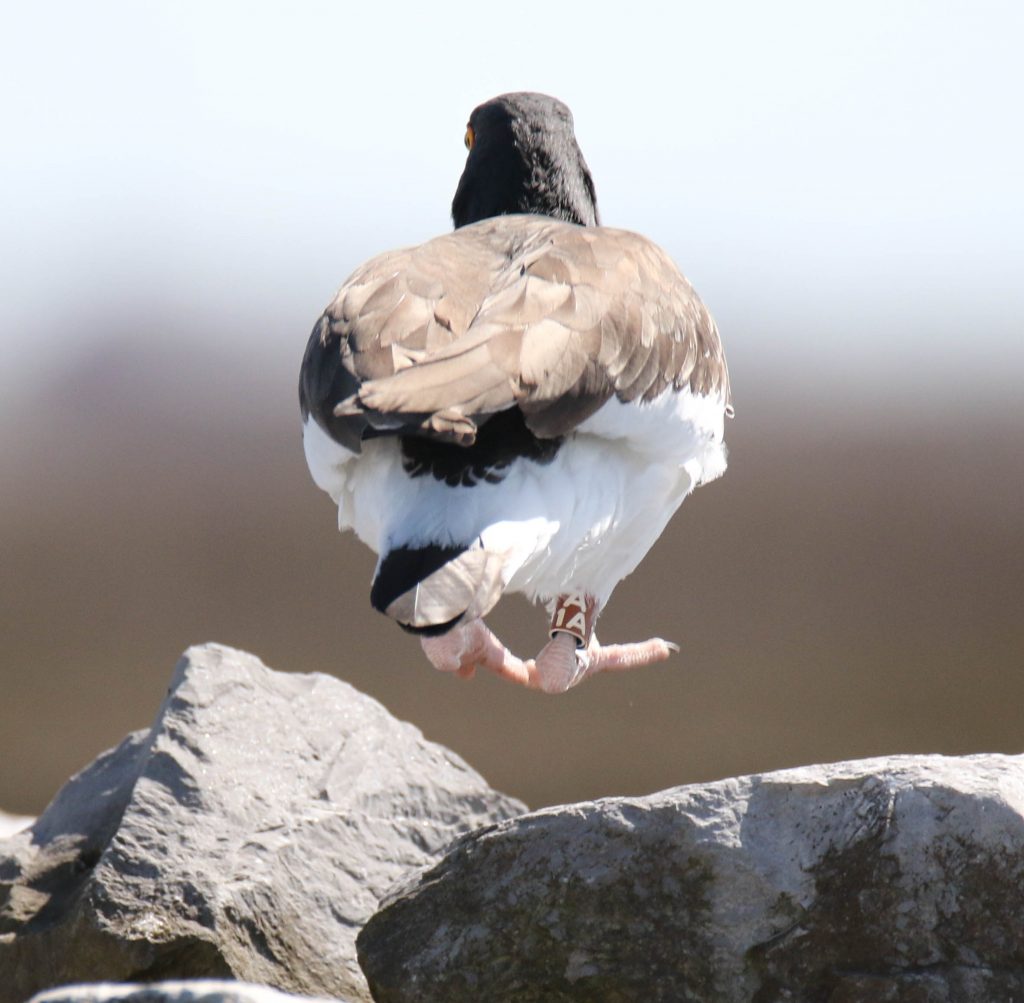 Alan just managed to catch him as he moved from one rock to another.

We found FR alone on a reef so we thought maybe his mate was on a nest but we didn’t find a nest and we didn’t find her. FR has gotten very laid back in his old age. He didn’t even react to us. Perhaps he will stop being so lethargic when he has a nest or chicks.

Any way there weren’t any other nests so we packed it in. The sky had clouded up and the wind had picked up and it was getting cold so I was glad to be done!