Alan and I were joined by one of GCBO’s RV volunteers, Bill Rose, this week. We needed some extra muscle to handle reinstalling a sign on Struve Luci. The truck thermometer read 49 when I backed the boat trailer into the water. For me that is a big BRRRRR! It wasn’t too windy though so not too bad fortunately. I had already decided we wouldn’t go up to Swan Lake this week since we had some extra stuff to do in West Galveston Bay so we headed to Struve Luci first thing. It was time for LT & JA’s nest to be hatched and unfortunately the sign we needed to reinstall was in their territory. Bad planning!

I pulled up to the end of the island nearest where the sign was and noticed that the pair there, L9 & unbanded were acting a bit sketchy. One immediately started walking down the reef away from the nesting area and the other one was hiding on the backside of the island. Suspicious indeed! We found they had a three-egg nest! Yay! This pair has trouble every year because when the skimmers show up in mid-April, they take over the entire territory. Hopefully this nest is early enough that they can succeed before the skimmer get going. 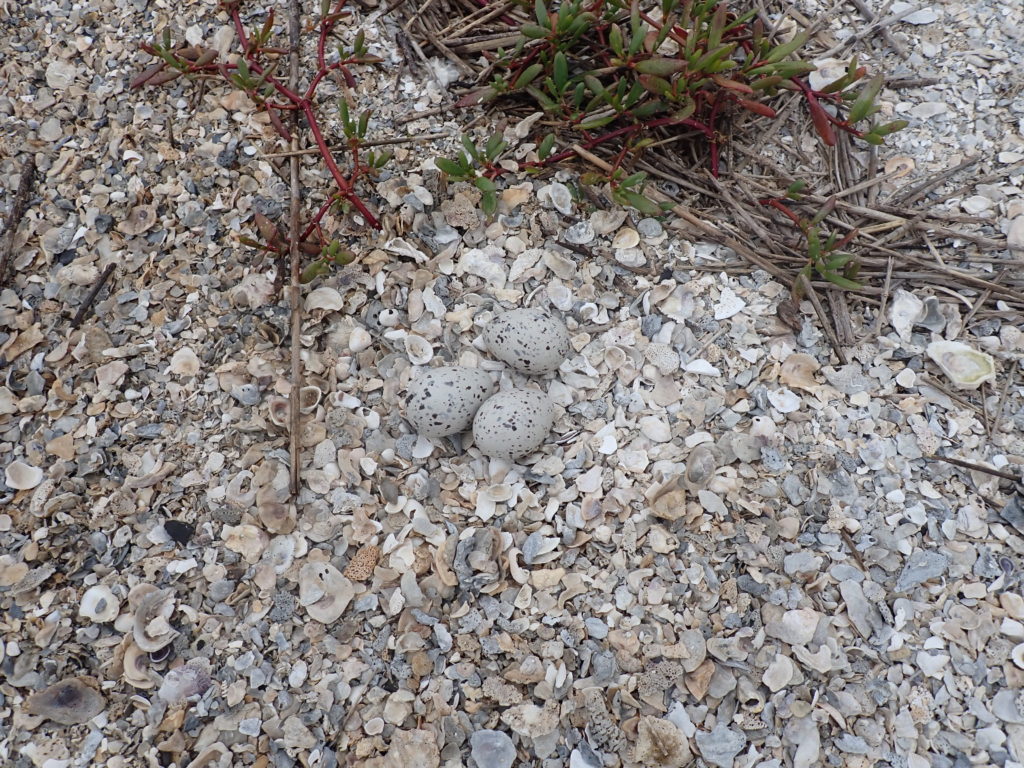 Because of the possibility of chicks, we decided to put the sign back up in L9’s territory instead of LT & JA’s. Bill expertly pounded in the first post and then we had to go get the signs. We walked carefully and Alan spotted this! 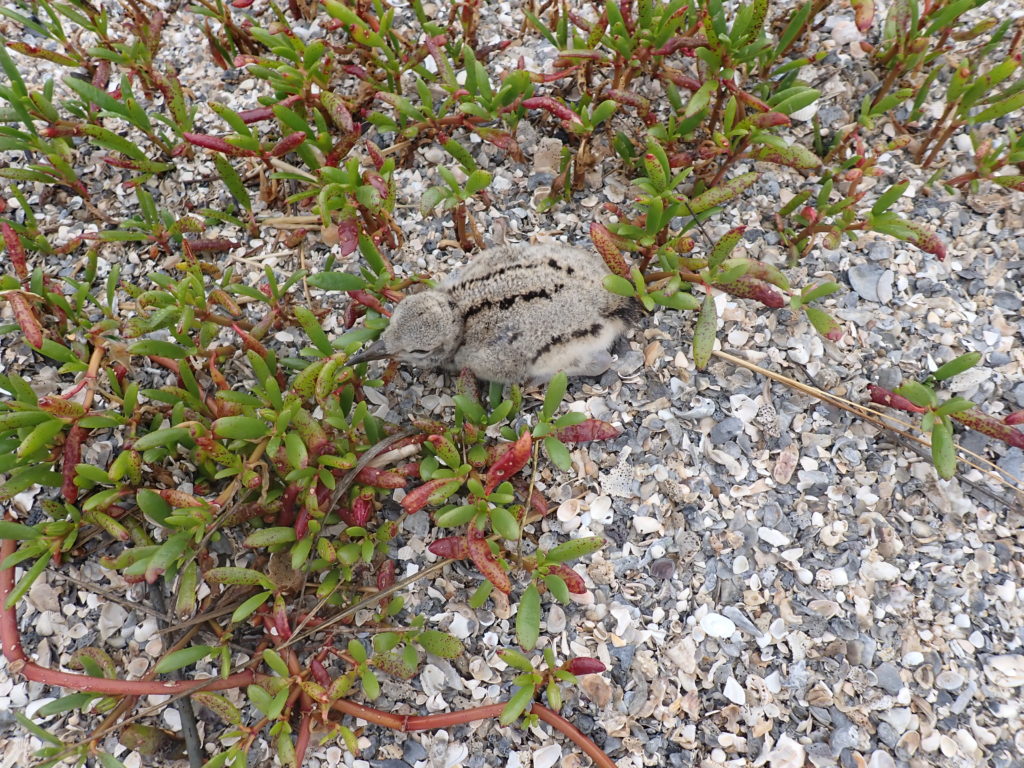 Woohoo! The first chick of the season. We steered clear of it, got the sign and walked gingerly back to where we’d put the post in. We didn’t see another chick but that doesn’t mean there wasn’t one. LT & JA stood on the shoreline eyeing us but not making a peep. They are the most laid back parents I’ve ever seen!

We got the sign done and left as quickly as possible so everyone could get back to their business. 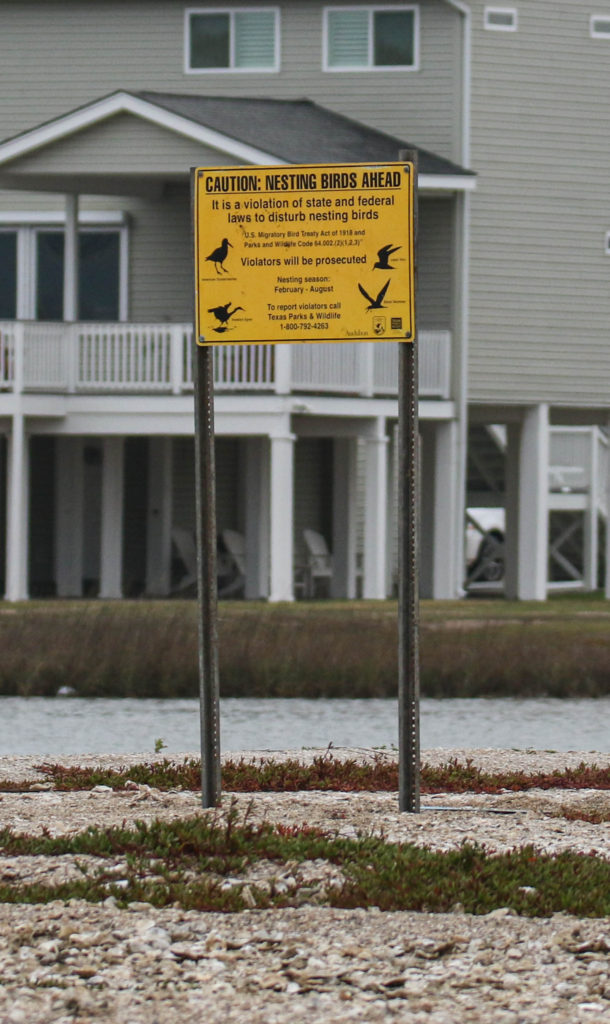 We went down to the other end of the island to check on 12 & unbanded’s nest and the unbanded pair. 12 & unbanded still had two eggs and the unbanded pair did not have a nest so we moved on. On Jigsaw, we saw only one oystercatcher out on the reef in LH & JX’s territory. Suspicious again! Bill and I went up and had a look around and as soon as we crested the island, we saw a bird fly off from the shoreline. JX had been hiding there protecting an egg. Another nest! 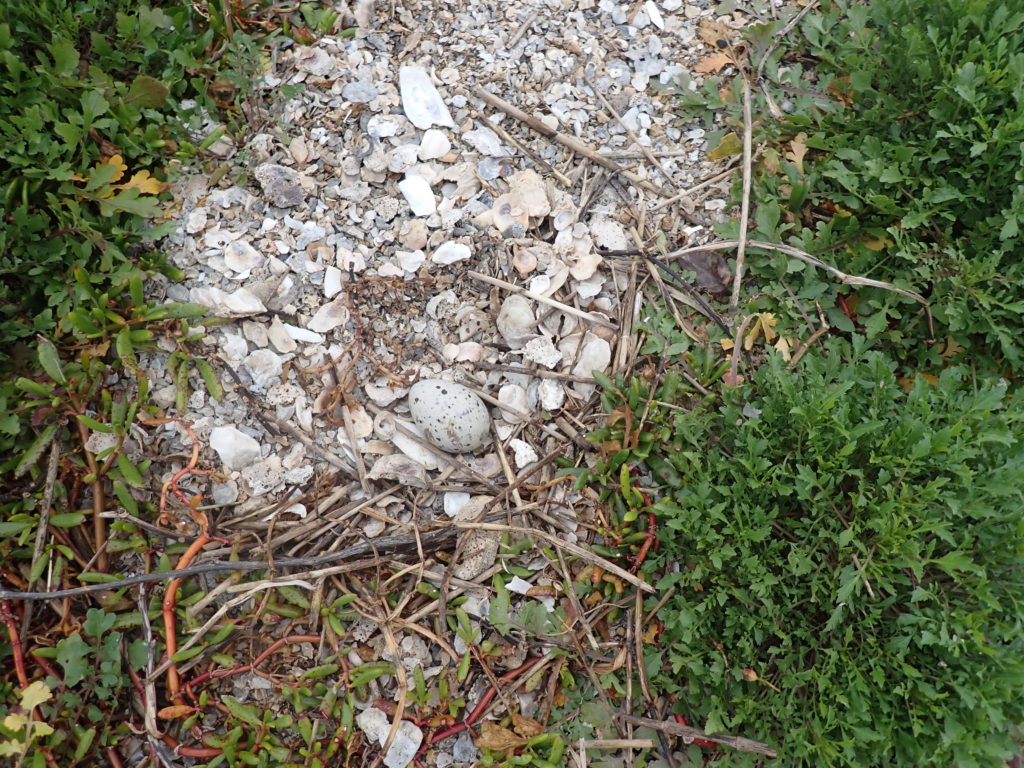 I banded JX as a chick on South Deer Island in 2015 so she’s 7 years old. We watched her try to run off females for several years until she was finally able to take her place in the breeding population when LH’s mate died last year. This is the first egg she’s ever laid! No wonder she was protecting it. Hopefully there will be two more to join this one.

We made our way around the bay checking on everyone. This week there weren’t any birds on the docks and we only found a few on Confederate Reef so I don’t know where the gang of youngsters was hanging out. The only birds at 8 Mile Road were 16 & F9A. I’m really wondering where they will try to nest. 16 has not had a nest in several years but I don’t think his new mate F9A is going to be happy with that. We shall see!

For the first time this season A4A & unbanded were back on the Gangs Bayou island. I had speculated last week that they may have abandoned the site but appears I was wrong (again!). They had some scrapes but no eggs.

Things got a little more exciting when we got around to F1A & E2A’s territory on South Deer. Again we saw only one of them on the reef. Bill spotted the other one up in the vegetation. Ah ha! I went up and found another one egg nest. Seems the birds finally got the memo that it’s time to nest. 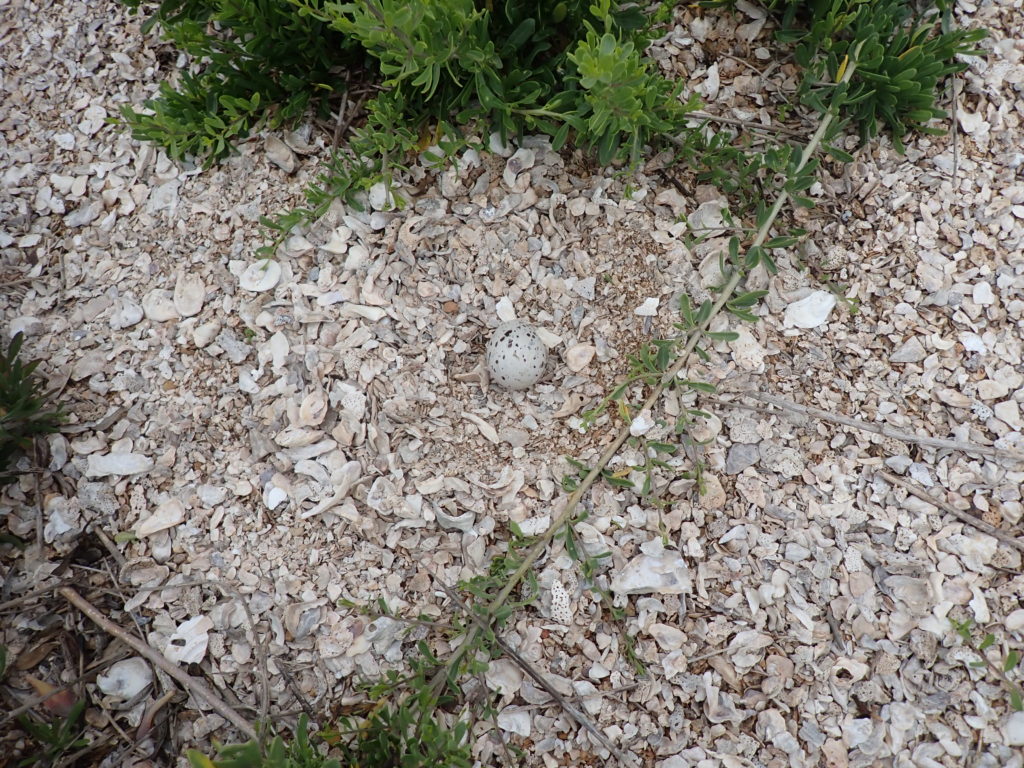 The tide was up a bit from where it’s been the last few weeks so we were able to get into some areas we hadn’t covered. That included checking in the area where E6A & unbanded nested the last few years. I found only the unbanded bird there and she was acting very upset as if she had chicks. Surely we didn’t miss a nest for a whole month?!

Nope we didn’t. She was protecting three eggs. 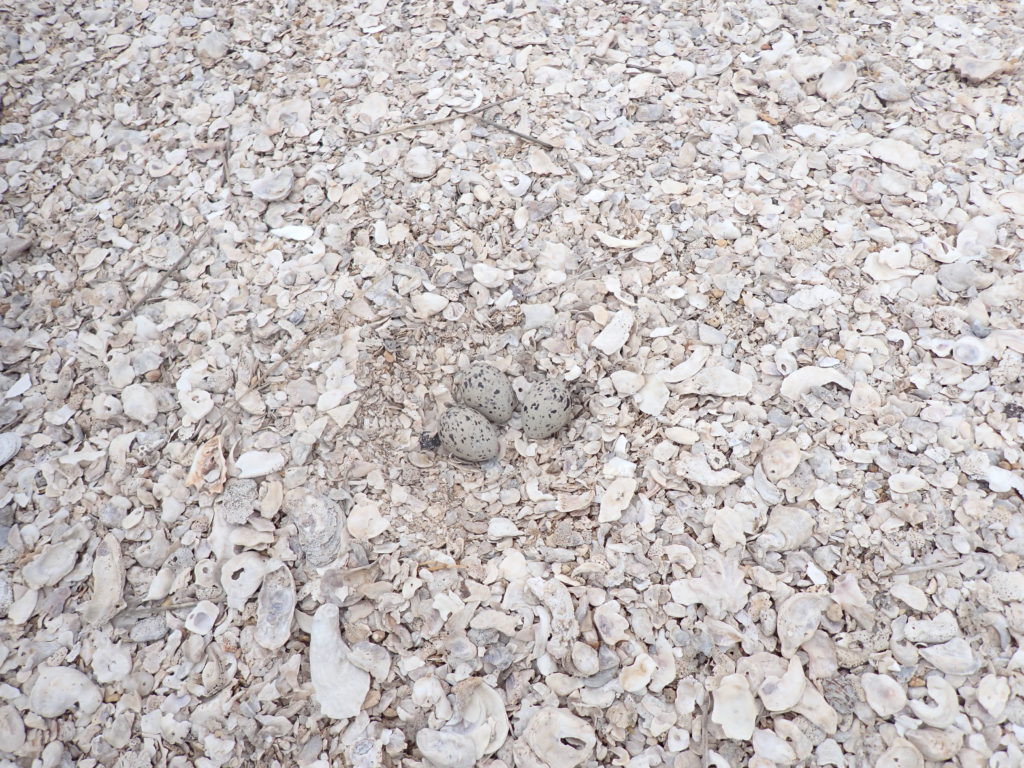 We weren’t sure who the mate was though because we haven’t seen E6A and Alan photographed a different banded bird in this general area last week. While I was checking the eggs, the mate flew in and they landed together on a reef. That allowed us to confirm the bands and turns out it is W4W not E6A.

W4W and sibling W4U were P3’s last chicks. He disappeared the following year in 2019. It’s great to see his chick succeeding! Obtaining a nesting territory as a 4-year old is quite a feat (reference the JX story above). Hopefully they will succeed.

We checked out C1A & unbanded next door and found only this. 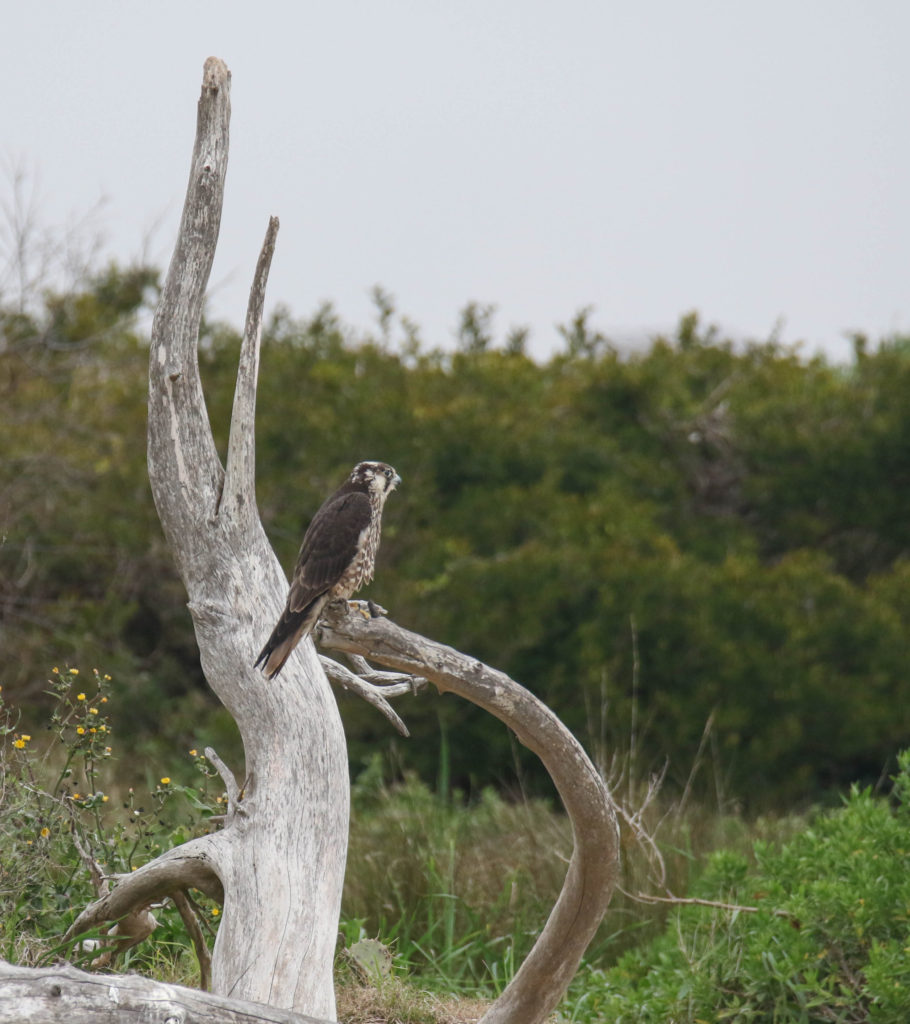 More on that story later. We found YM & JH hanging out in some good company one a small jetty. I guess they don’t have a nest yet. 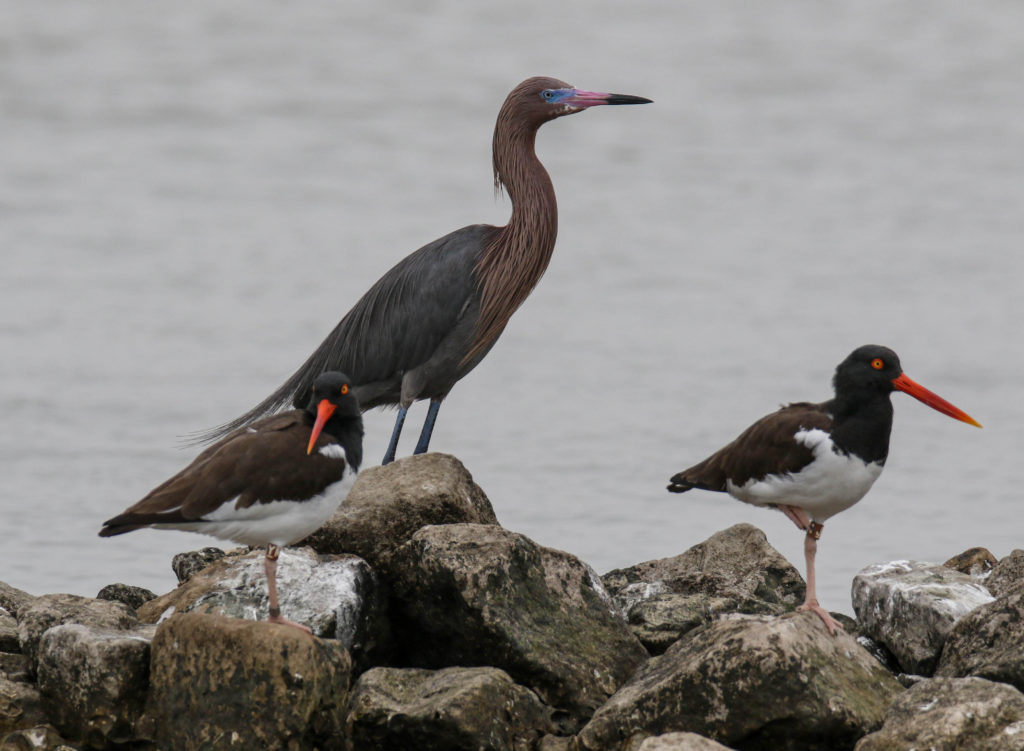 Things got really confusing on Marker 52. P4 was out on a reef alone and you know what that means! But we couldn’t find her mate JJ anywhere. Alan suggested they may be around the back side of the island where J6 & UF had tried to make a go of it in the heavy vegetation last year. This is not a typical nesting location but J6 & UF’s island is too eroded to nest on any more so they are trying out other options. We went over there and as I was looking around, J6 & UF came flying in from their small island calling. Next thing I knew, another bird (presumably JJ) came flying in and tried to run them off. I have no idea where he came from and despite looking for quite a while, I never did find a nest. We will have to investigate that situation further next week!

The good folks at Audubon had asked me to pick up some trash bags they had left on Marker 52 from a clean up earlier this year. Their boat is broken and they didn’t want to leave the trash there any longer. Alan and Bill made quick work of loading the trash onto the boat while I was looking and not finding JJ. 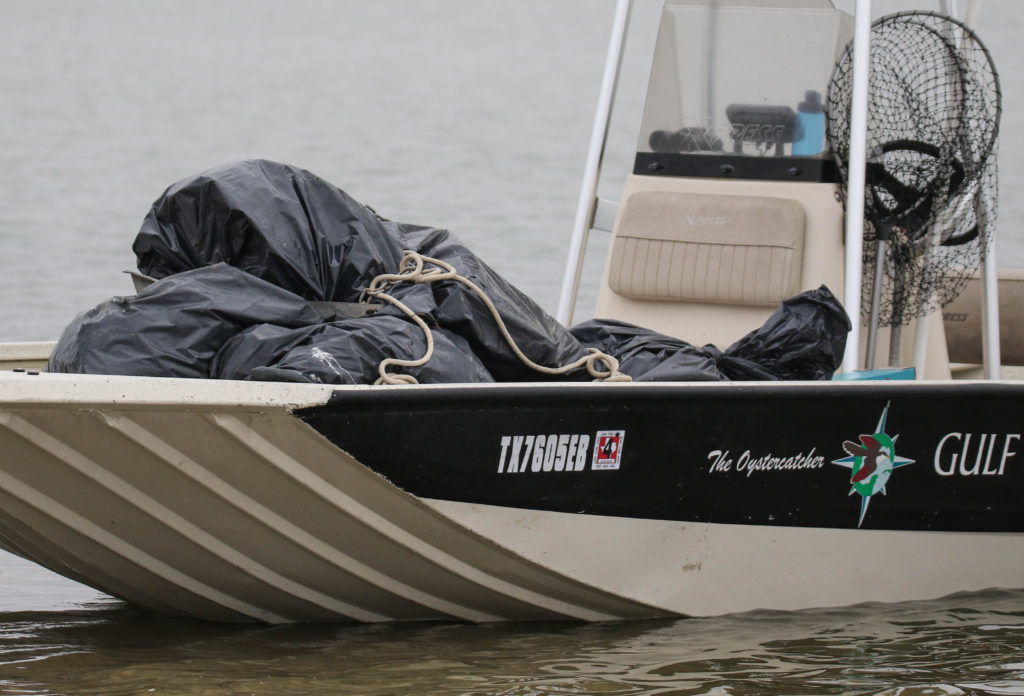 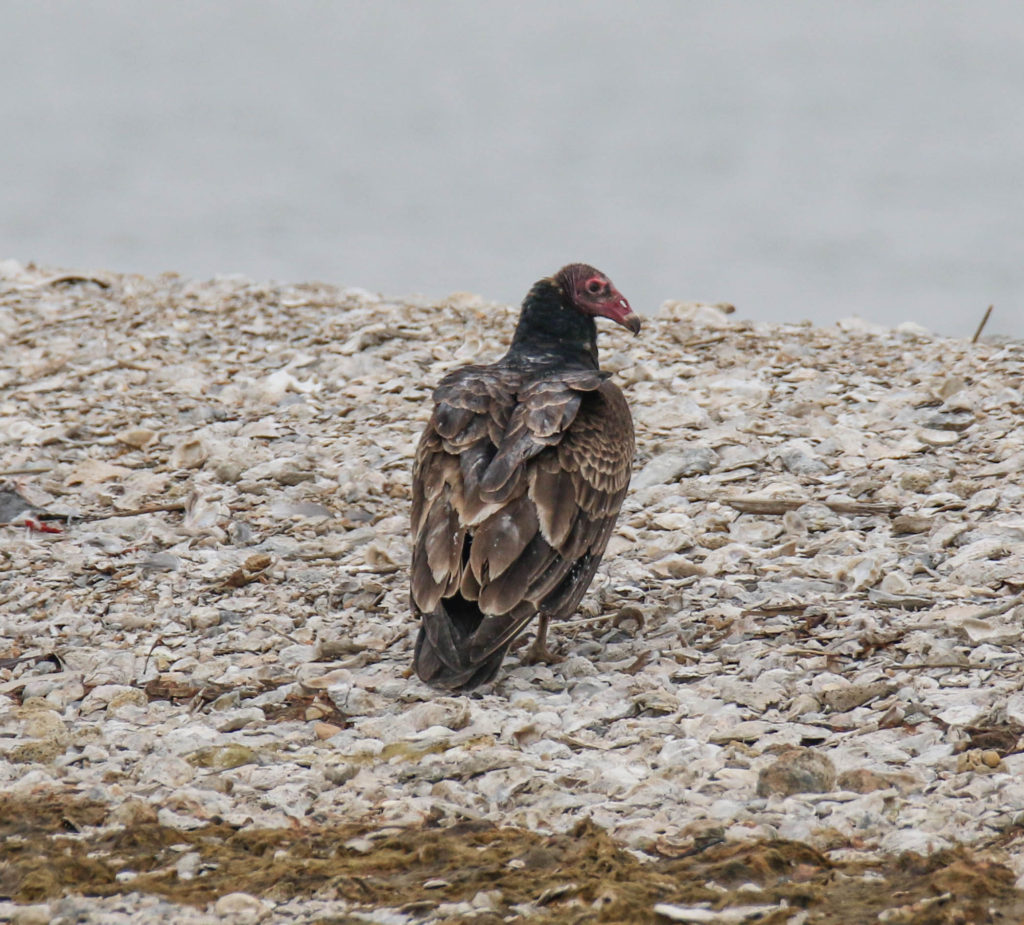 I investigated and found the remains of several Laughing Gulls. I guess the Peregrine has been feasting right there. The vulture was chowing down on the leftovers. Not very far away though I found that FR & unbanded had a single egg. No wonder they wanted that vulture to leave! I picked up all the dead bits and threw them in the bay so the vulture wouldn’t come back and left them to their business.

The vulture flew over to CA & Y2’s island and they pitched a fit so I thought they might have a nest too but they didn’t. Finally, we came to the last pair of the day, an unbanded pair in Jones Bay. We tried to catch one of them a couple weeks ago but they were having none of our nonsense so they are still unbanded. They had a one egg nest too! I neglected to bring the nest box with me though so we couldn’t try to catch one. I don’t usually try on one egg nests any way because they don’t start incubating until they have two eggs. Next week!

I had taken my coat off while walking around looking for JJ’s nest because I got hot so the ride back to the boat ramp was a bit cold! I was glad to get off the water and into the warm truck.