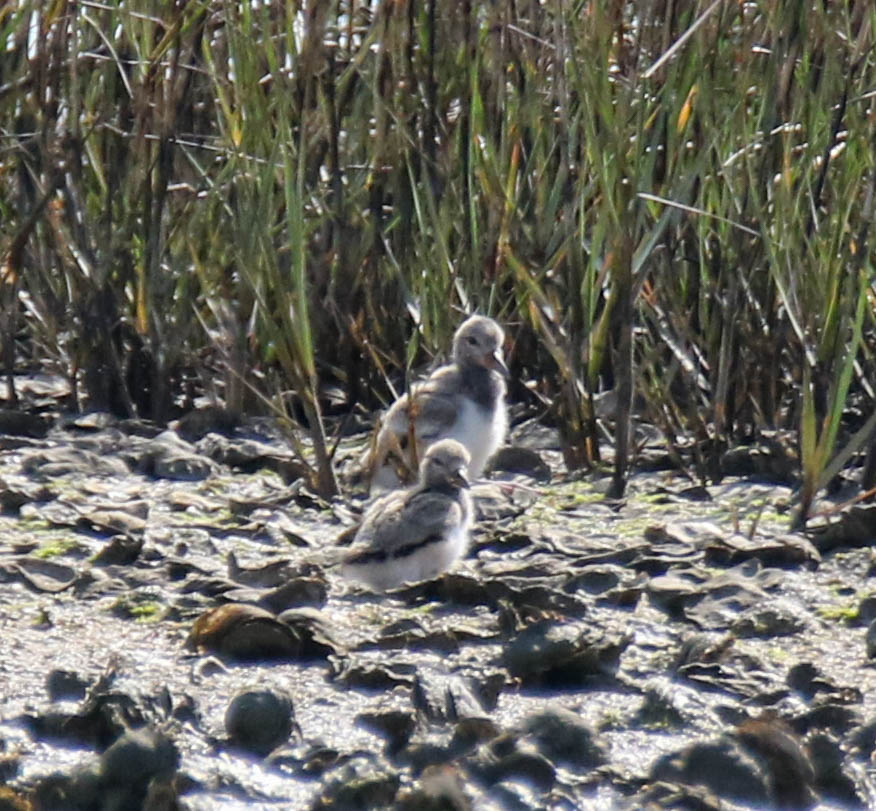 The weather was wonderful this week. When people think about what its like for us out there on the boat, the weather this week is what they imagine. Sunny, little wind, not too cold and not too hot. We seldom get days like people imagine but this week we did!

Because there wasn’t much wind and we didn’t check Swan Lake last week, I knew we needed to get up there so that was the plan but E1A & C2A gave us pause. They go back and forth between some small islands along the Tiki Channel near the causeway and another small reef thing that is an island at low tide that’s on the other side of the causeway. We never know which location they are going to choose but when we motored along the Tiki Channel, Alan spotted one of them up on the highest part of the island laying down. Oh boy. Sure enough, two eggs. 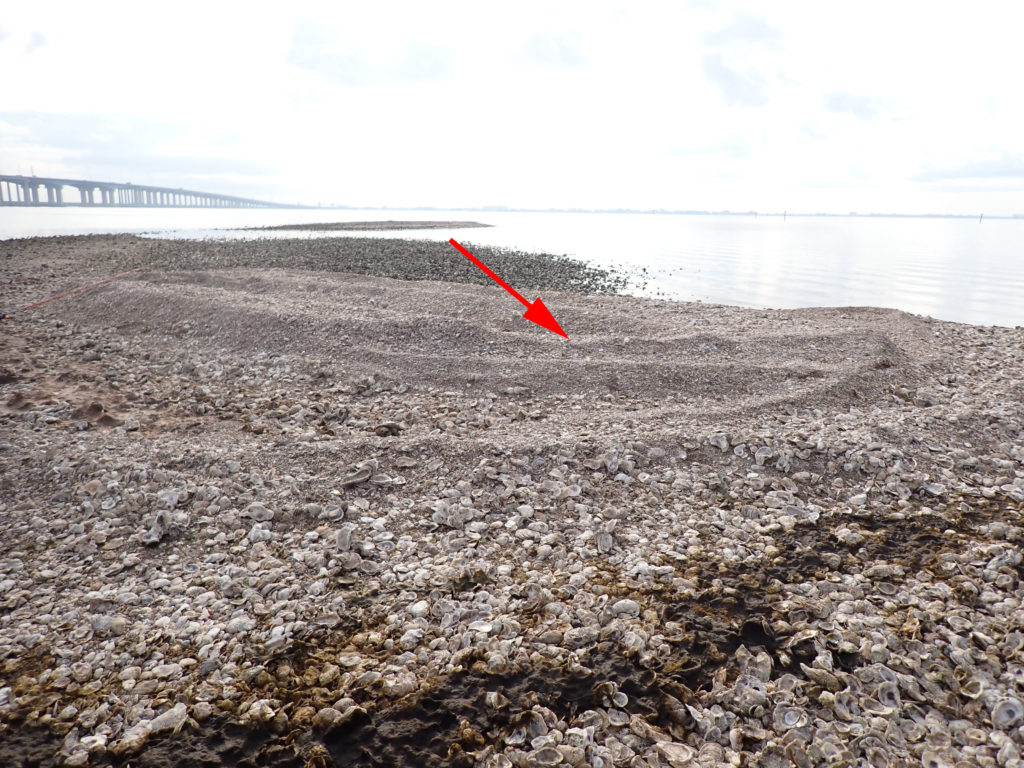 I really wish I could send some of these birds to nesting school. If they’d laid those eggs a month or six weeks ago they’d have had a chance but laying them in early March is a doomed proposition. The tide always goes up in March and these islands will be underwater unless we get a super rare year without any high tides. It is just sad that they make the same mistake every year.

We headed up to Swan Lake and didn’t find anything interesting until we got to K7 & unbanded. I was expecting them to have a nest and when we got near, I saw the female get off the nest and try to sneak away. Three eggs! 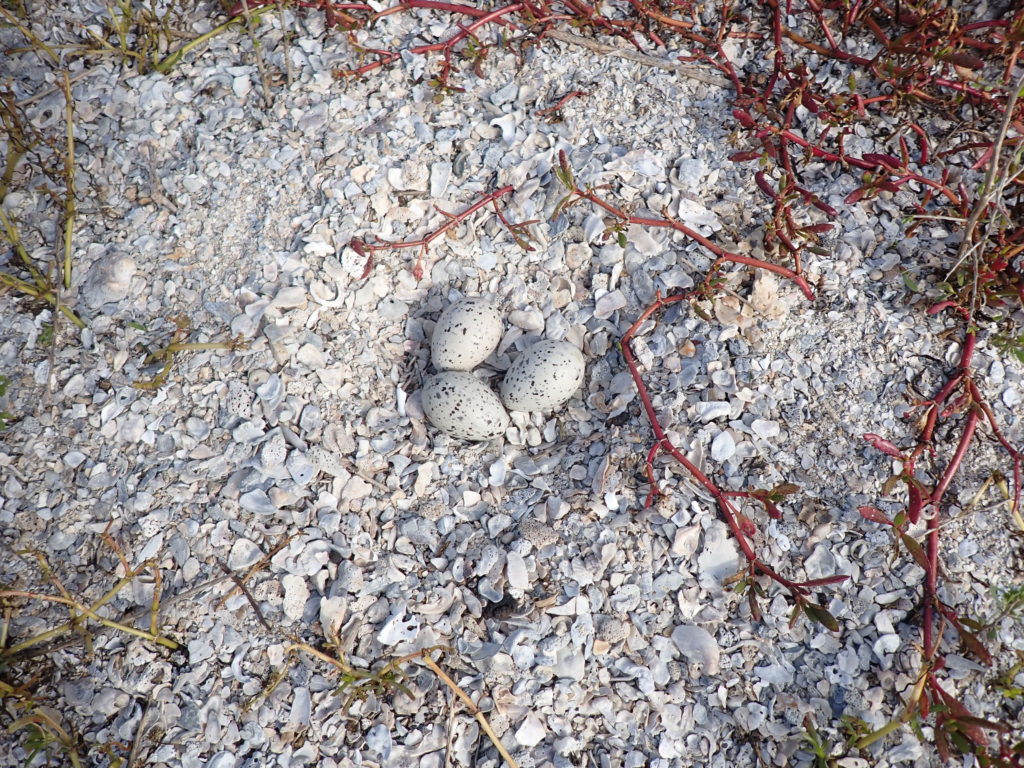 Yay! Let’s hope they fare better than they did last year. They have a pretty good track record so the odds are in their favor. The other pairs were all hanging out doing nothing so we headed back to West Galveston Bay and went to Struve Luci.

I was hoping to get a look at LT & JA’s chick and see if they had two but they were too smart for that. They heard us coming and the chicks were out of sight by the time we got there. We finished the sign we started last week and verified that L9 & unbanded still had three eggs in the process. LT & JA were most unhappy with us so we moved the boat to the other end of the island to check the other pairs.

Alan spotted one of the unbanded birds up on a nest and I verified they have two eggs. Next door 12 & unbanded’s eggs were pipping! That means the chicks were starting to work their way out of the eggs. So exciting! There was just a tiny hole in one of them and small cracks in the other one but we left quickly so the adults could get back to their business.

I motored back to the other end of the island hoping that LT & JA would not be expecting us to come back and that worked great. Ha! Fooled you! I spotted one chick standing up against the spartina and while Alan was shooting photos, another smaller chick walked over to where the first one was. Woohoo! They do have two chicks! Very awesome.

One is a lot smaller than the other one which means they are probably egg one and three. Because they start incubating when there are two eggs, the third egg is behind the other two and hatches later so that chick ends up being smaller than the others. It catches up eventually if it survives but it’s a hard life for that little chick because the bigger ones take all the food and it only gets the leftovers. Let’s hope LT & JA bring back lots of food!

We moved on to Jigsaw and found that LH & JX had increased their egg count to three. Good job JX! There was nothing happening along the Galveston Island shoreline but 16 & F9A were enjoying the sunshine. 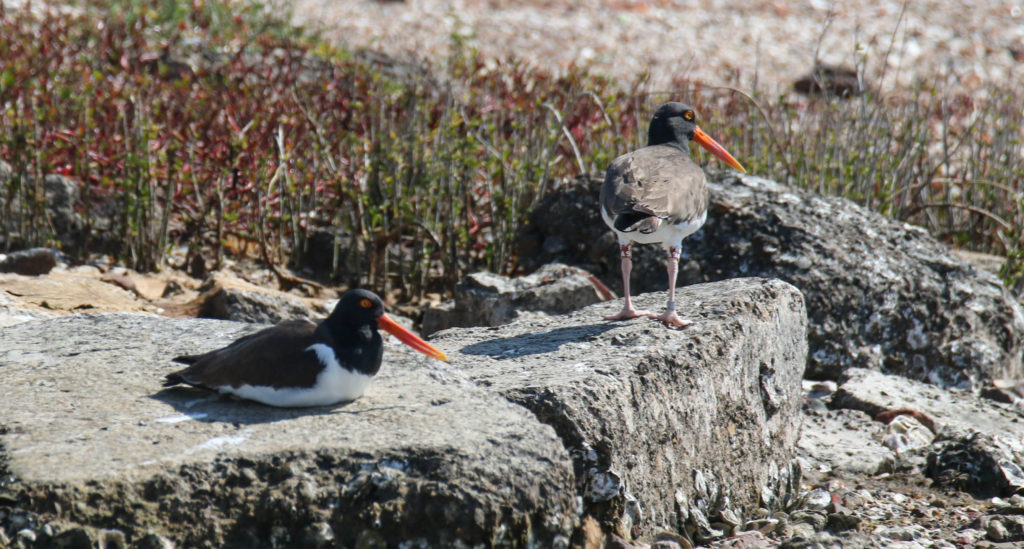 We found the gang of youngsters (19 of them!) on one of the Sportsman Road docks. Most of them were banded too!

The Gangs Bayou birds were loafing on the breakwater so we headed to South Deer. I was expecting some action here and I wasn’t disappointed! Everybody has a nest now! A5A & unbanded have three eggs, A1A & unbanded had two and Y7 & unbanded had one. Way to go! F1A & E2A, who had one egg last week, still only had one egg which is odd. Usually for a first nest they lay three. I hope something isn’t getting the eggs.

We headed to North Deer and found some unhappy news. We saw what we thought was W4W & unbanded on a small reef in front of their nest. I assumed they heard us coming and the incubating one flew to the reef to avoid detection but that wasn’t the case at all. I went to check the eggs and found they were gone and near the nest was the remains of an adult. Dang! Something (probably coyote or Peregrine Falcon) got the incubating adult. What a bummer! We looked a little more closely at the birds on the reef and found them to be two unbanded birds so the dead one must have been W4W. I wasn’t able to verify because the legs weren’t there. Alan said he hoped the predator choked on the bands. Me too! So sad.

The other pairs on North Deer had nothing going on but we did see this pelican with a red gular pouch. Those are supposed to be from the Pacific population. Some were transplanted here after the oil spill and we see them every once in a while. 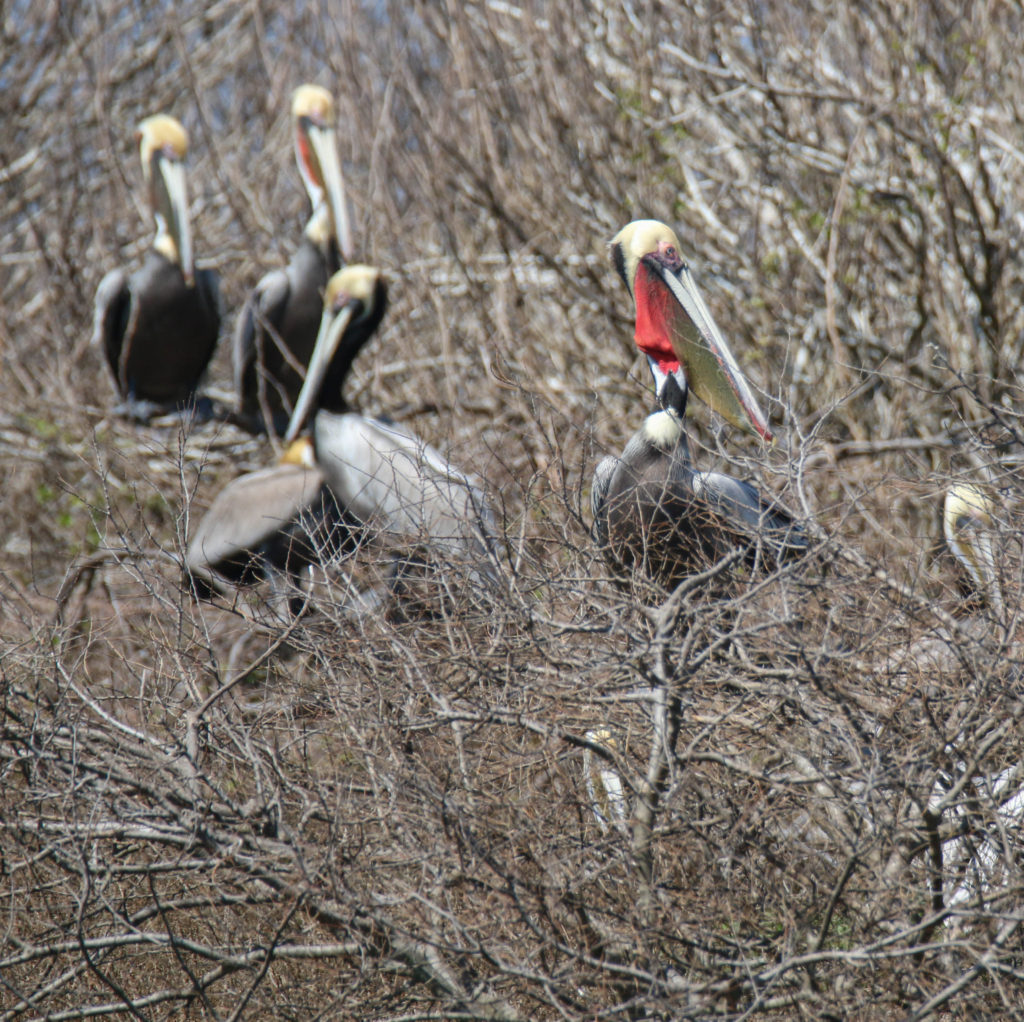 We moved on to Marker 52. J6 & UF were suspiciously absent from their small island in the bay so we went around to the back of Marker 52 where no sane oystercatcher would ever try to nest. There we found UF alone on a small reef. Same scenario as last year, so I knew that J6 was on a nest in the vegetation. UF tried to slink away but I was on to her. 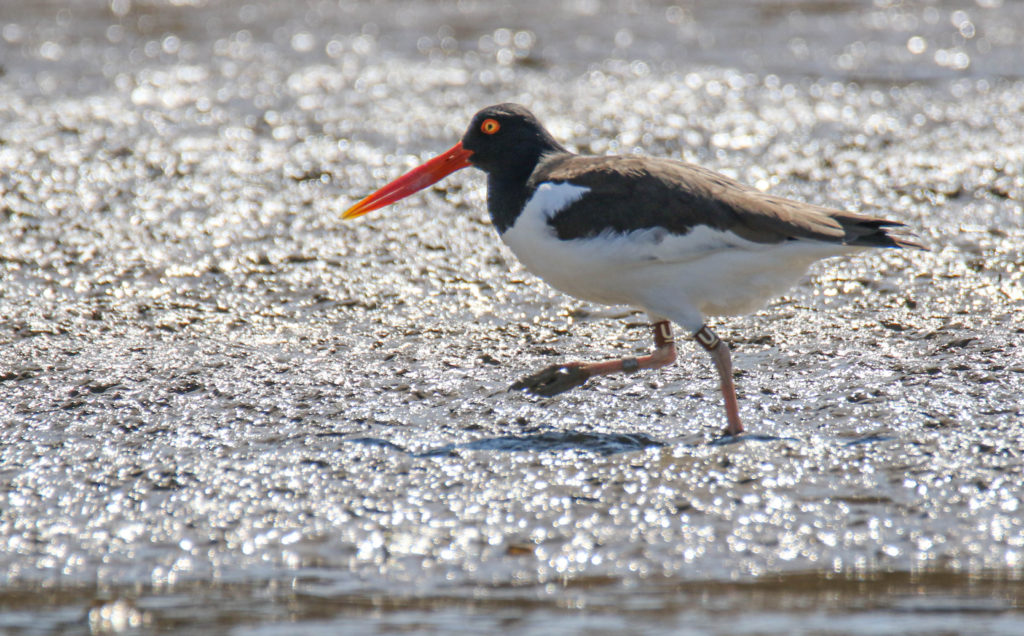 I went up through the spartina and just caught J6 running off the nest. Two eggs in a nest that looks very much like a regular bird nest and not an oystercatcher nest. 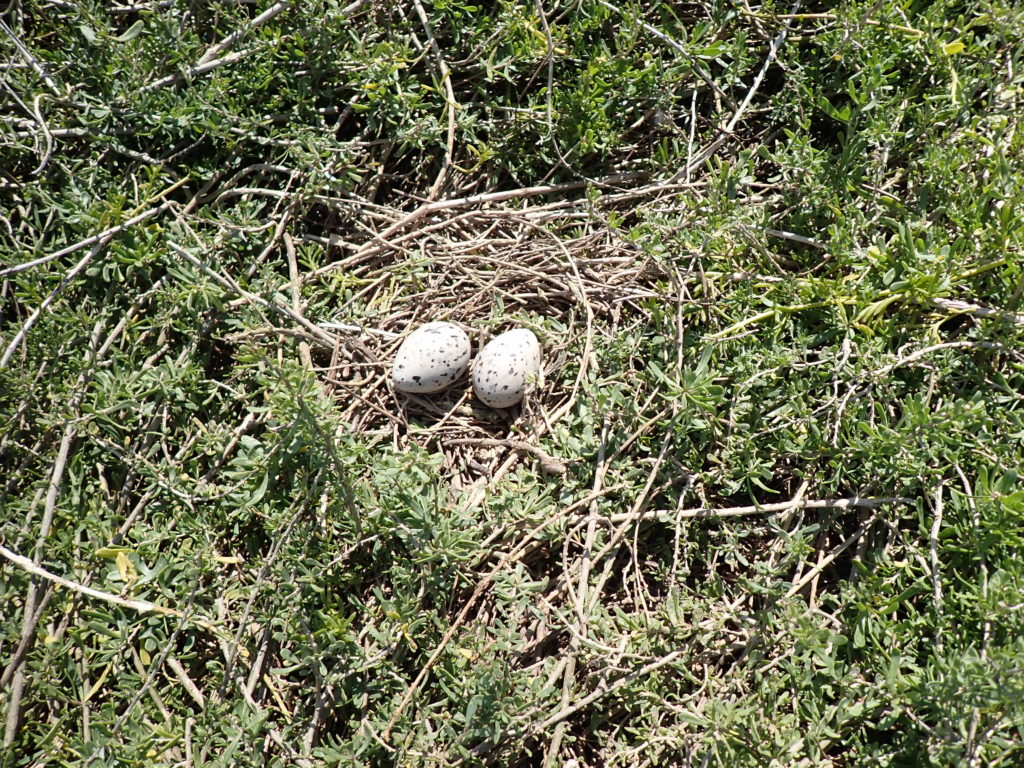 Again, I wished I could send them to nesting school. This scenario might have worked out well a month or six weeks ago but in early March it’s probably a hard no. This area will be engulfed in nesting pelicans in a few weeks and the oystercatcher eggs don’t stand a chance. It will be a miracle if they pull this off. But J6 & UF have performed miracles before so we’ll see.

We checked the rest of the pairs on Marker 52 and couldn’t find JJ & P4 anywhere. Now what are they up to? We’ll have to do a more thorough search next week if they are still missing. FR was trying to fake us out and think he and his mate had moved their nest. 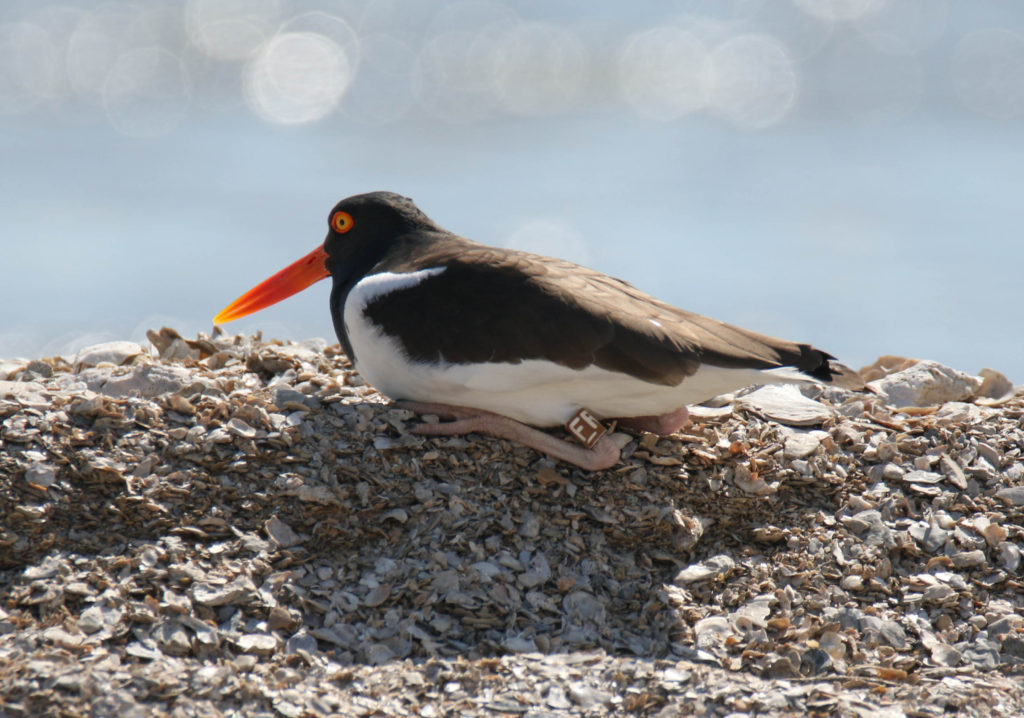 But I wasn’t fooled and checked where their egg was last week. Two eggs now! Go Mrs. FR! CA & Y2 had also joined the action with two eggs of their own. The birds clearly got the nesting memo as we found eight new nests!

The last check of the day was the unbanded pair in Jones Bay. They had one egg last week. I figured they had laid more and thus would be more tied to the nest this week so we could give the box trap a try. They had two eggs now so I set up the trap and we moved away in the boat. At first it seemed like the incubating adult would go right in but then it got distracted with chasing away gulls so it took a few more minutes, but we got it! She was a feisty girl and was not appreciative of the jewelry we gave her! 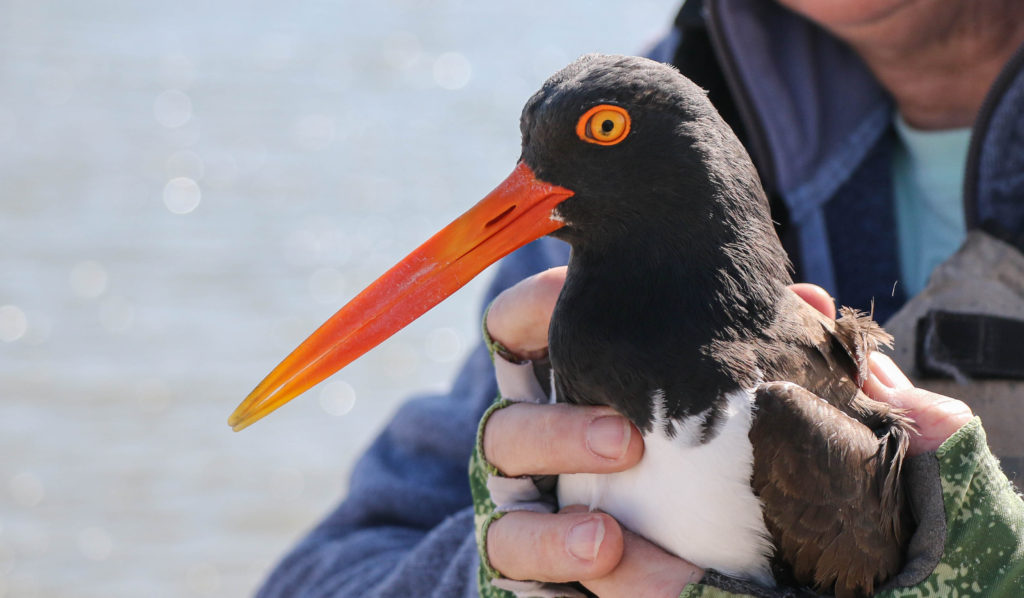 She is now E4A and that pair is no longer the Jones Bay unbanded pair. Yay! And that was a great way to end the day.