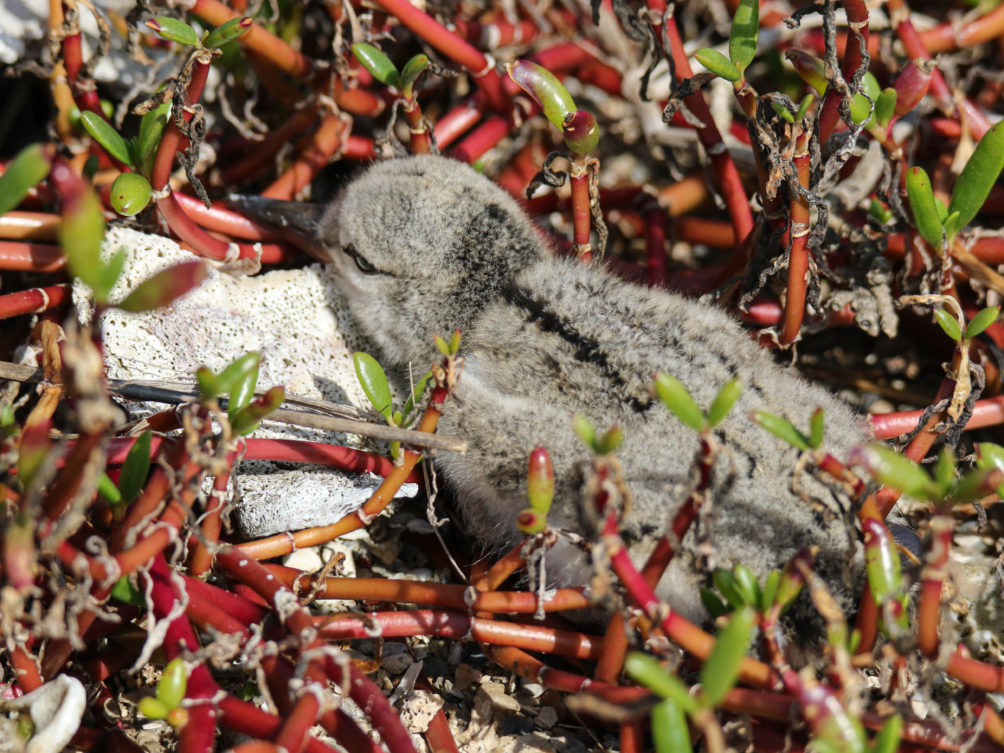 Another exciting week with the oystercatchers! I had planned to go out to the Brazoria Bays on Tuesday with Taylor Bennett (GCBO Coastal Biologist) and our excellent intern Kenlynn Volz but the weather was too bad so we delayed until Wednesday afternoon. We had to wait out a thunderstorm complete with small hail at the boat ramp but we finally got underway about noon. We headed up to the west end of West Galveston Bay first, but the pair at the mooring facility wasn’t there. Bummer. We headed back to Alligator Point Island and had better luck. This pair was guarding a one egg nest! Yay! Made the trip worth it. They are unbanded because they haven’t fallen for any of our tricks yet but maybe this will be the year.

We went back down to Bastrop Bay and found only J8 there alone. Poor dude! Maybe his mate was somewhere on a nest that we didn’t check. 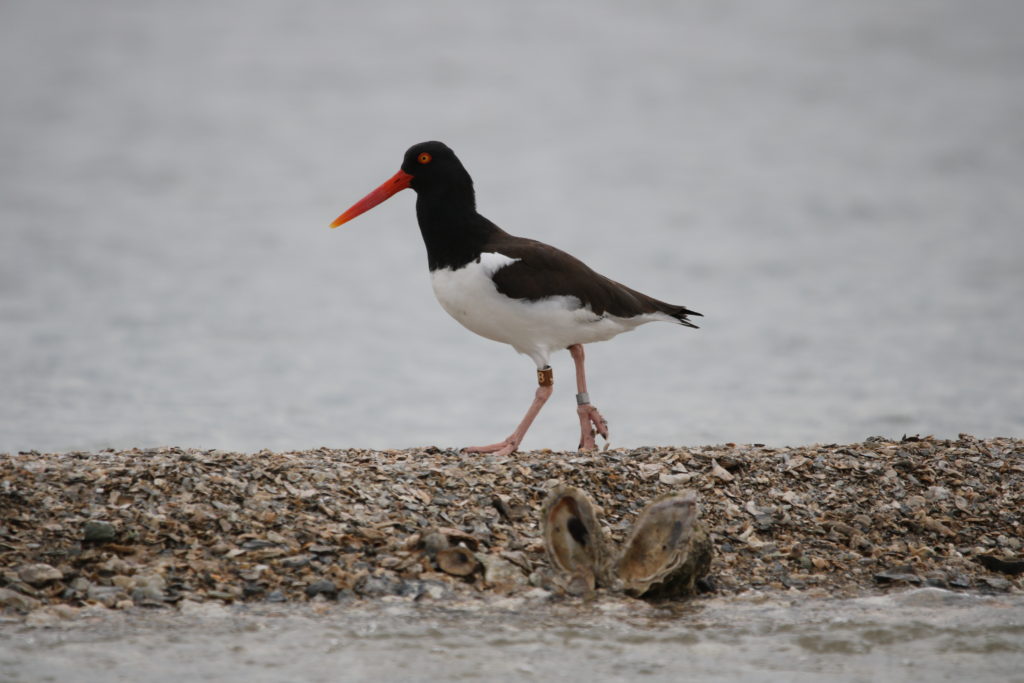 No sign of the other pair that J0 & 38, so we headed down to Drum Bay. Last year, we observed a long standing male JK with a new female AR late in the season. This year we arrived at his territory and found an unbanded bird on the reef alone. An unbanded bird? Not what we were expecting. I thought maybe it was guarding a one egg nest so we trudged over and looked but found nothing. The bird on the reef flew around calling though and landed on another small island so we headed that way in the boat and viola we saw a bird on a nest there! It wasn’t JK though. It was AR. Appears JK is no more. That is very sad because JK has been my buddy for a long time. I’m sorry to see him go. 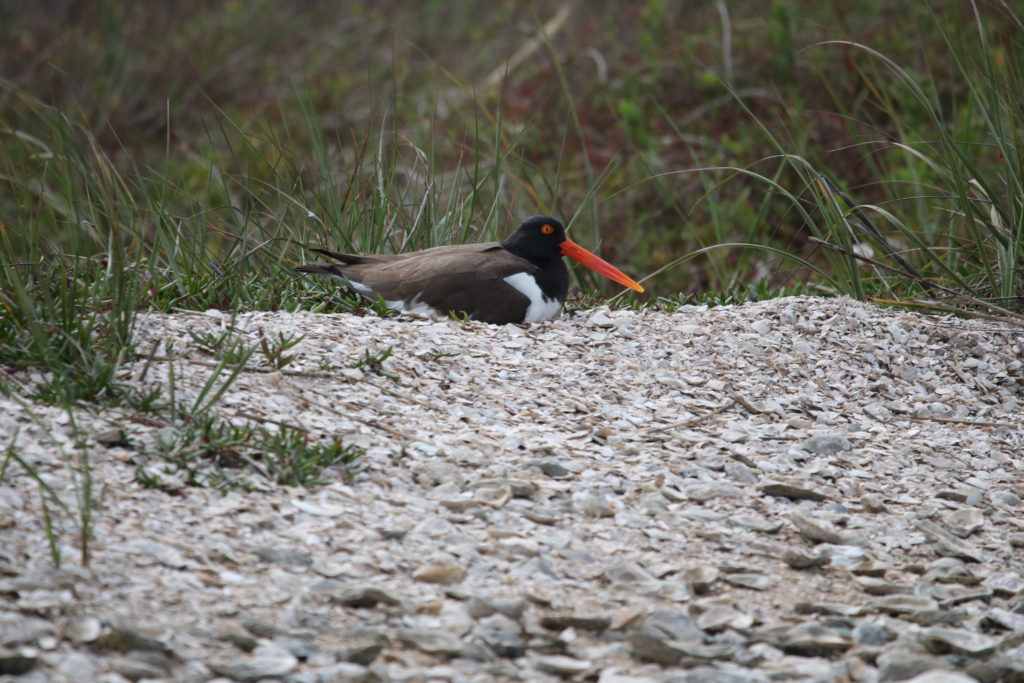 This is the first time we’ve been to check on these birds and clearly we should have gone earlier because these eggs were already pipping meaning the chicks were about to hatch. If you look closely at this photo you can see a hole in the one of the eggs where the chick is working its way out. 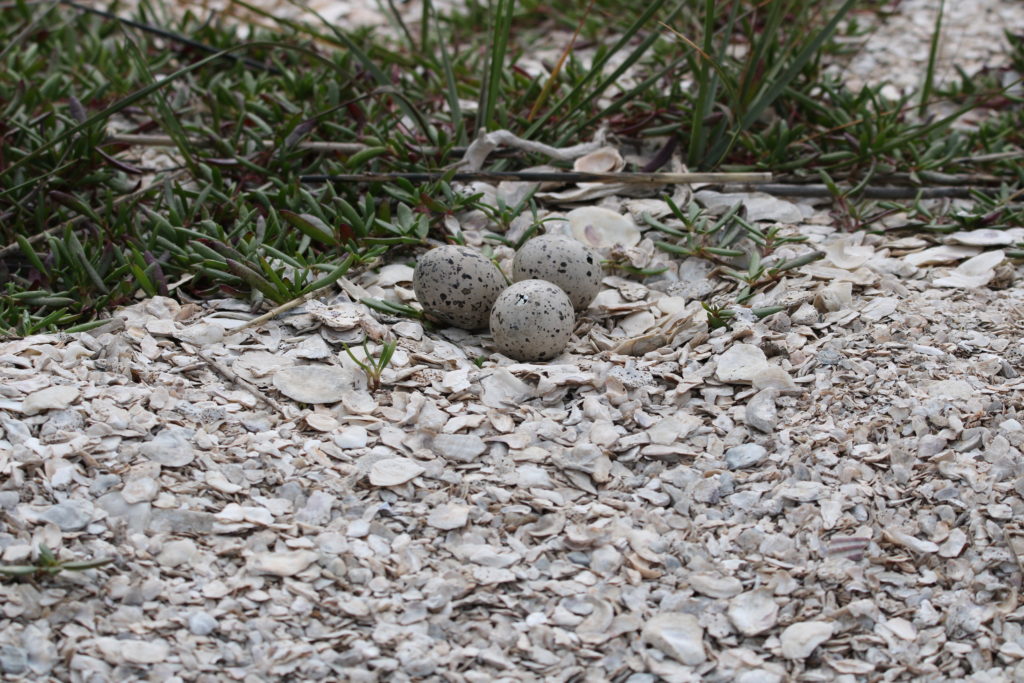 This whole situation was even more confusing because in the distance we could see another oystercatcher on another island where JK used to nest. Was he over there? Nope that wasn’t him either. There was an unbanded pair there and they had a nest too! Since I wasn’t expecting to find a new pair, I didn’t bring the nest box so we couldn’t try to trap them. Just as well since it was getting late and cold. We headed back to the boat ramp and will try another day.

On Thursday, Alan and I headed out to West Galveston Bay with Bill and Michelle Rose, GCBO RV volunteers extraordinaire. I had a plan in mind to trap one member of the unbanded pair on Struve Luci that has eluded us for so long so we headed that way first thing. Along the Tiki Channel we checked on E1A & C2A. They have three eggs now! I have little hope for that nest but hopefully I will be wrong.

We checked on all the pairs at Struve. All was well with L9 & unbanded and the unbanded pair incubating their nests. LT & JA were keeping their chicks hidden and we found 12 & unbanded had two chicks hiding in the vegetation. 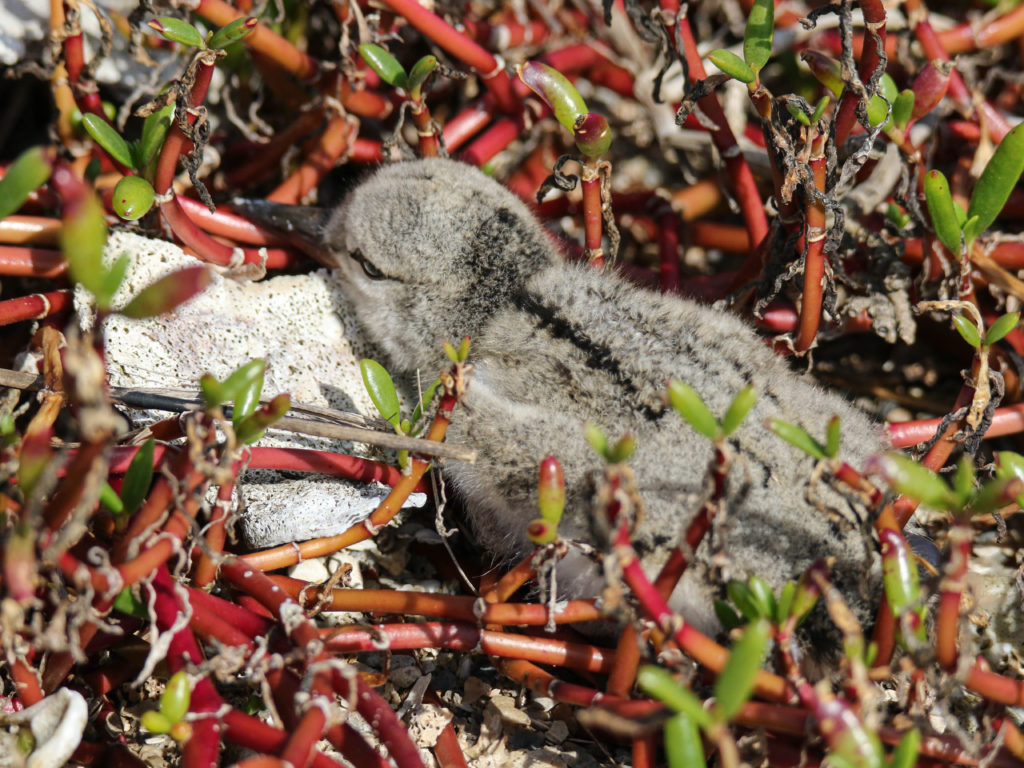 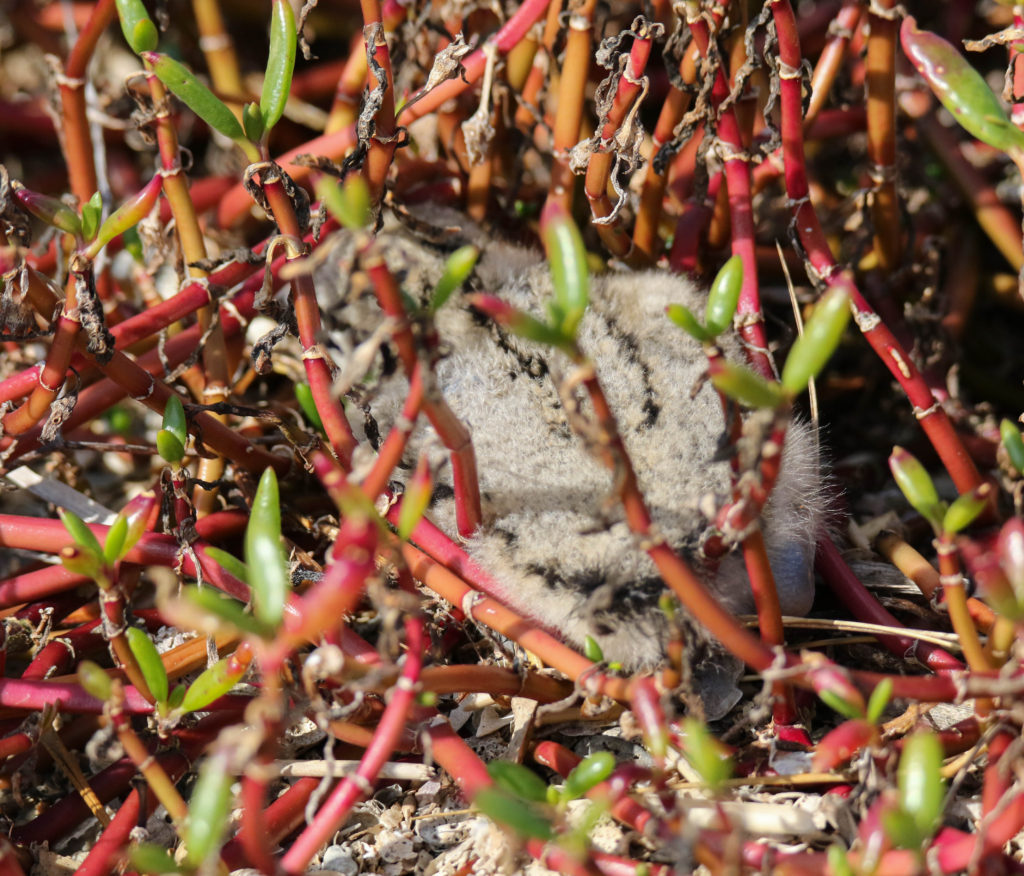 I recently replaced the net on our bow net and I was anxious to try it out on the unbanded pair’s nest. We have tried the noose carpets, the whoosh net, and the box trap on them and they have not fallen for any of it. This was my last hope. The bow net is a big hoop that folds in half with a net covering the hoop. We set it up with the nest in the center and I put a zip tie holding the folded hoops together so it could not deploy. My plan was to leave it there and let them get used to it before we actually set it to trap one of them on the nest. 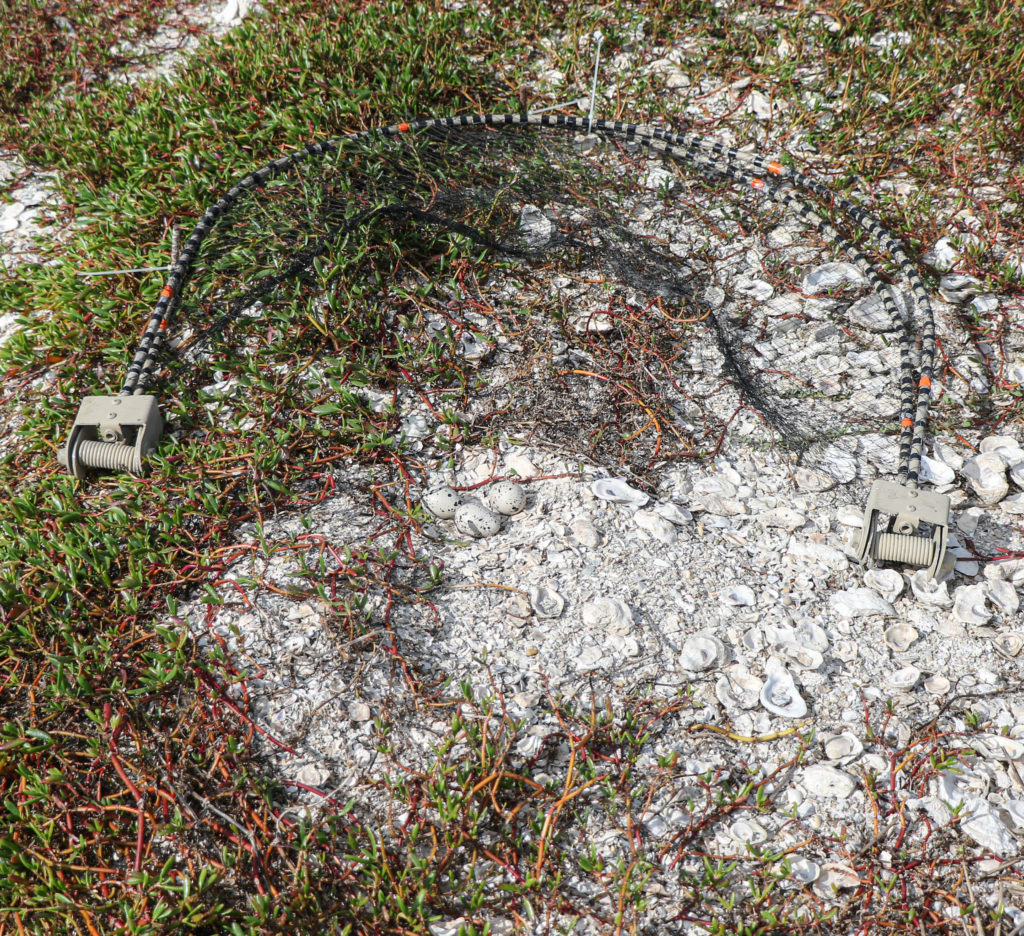 Then we headed up to Swan Lake. Nothing happening with the pairs on the way up there or any of the pairs in the lake except that K7 & unbanded still have three eggs. K7 was incubating them and was not happy when we arrived. But then he’s never happy when we arrive! We left him to his business and headed back down to West Galveston Bay.

We could see from a distance that one of the unbanded pair was on the nest so it was clear they didn’t mind the bow net being there. Excellent! We went up and cut the zip tie off and I put the trap tripper in place. Thank goodness Bill noticed that I cut the wrong zip tie off! I replaced the real eggs with fake ones to make sure the real eggs stayed safe and we moved off in the boat to Kevin Somers’ dock to watch and wait. They were a little hesitant but then one of them went up and sat right down on the fake eggs. I’m pretty proud of those things! They have fooled many an oystercatcher. I pushed the button and bingo! We caught the male. We quickly moved everything away from the nest, put the real eggs back, and banded him E5A. He was very happy to be on his way when we let him go. 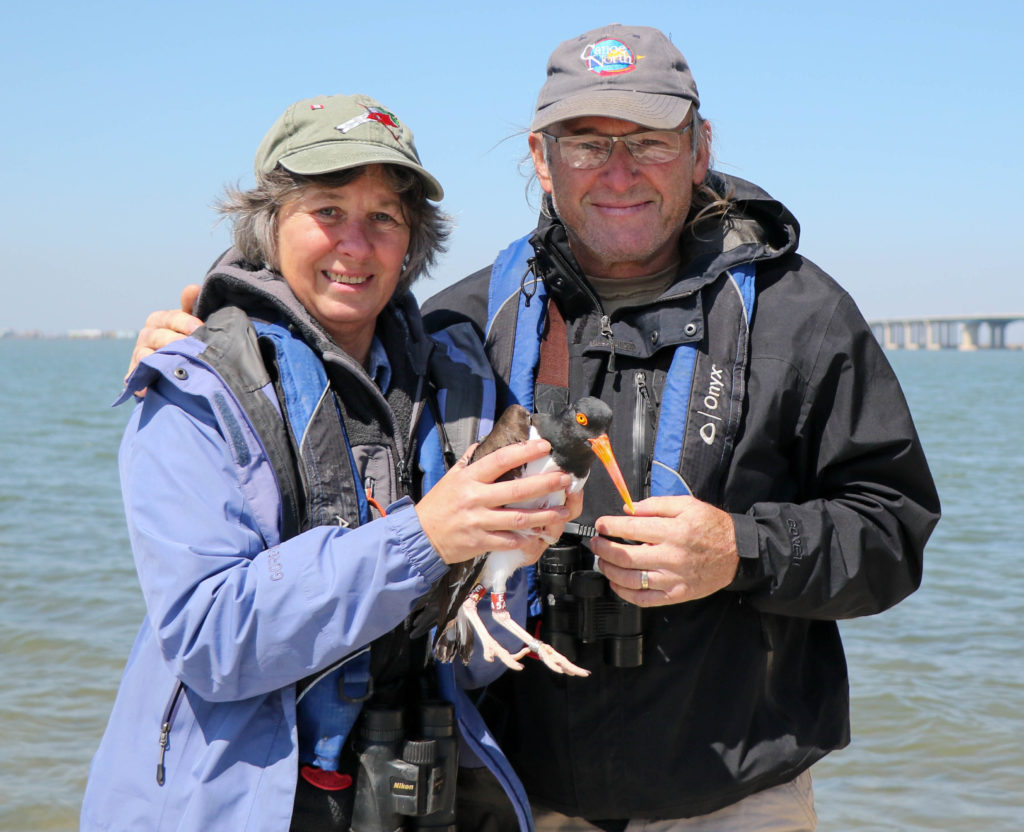 We moved off to another island to take the bow net apart so the newly banded E5A & wife could get back to their business. I’m really happy to get one of that pair banded! It will make it easier to tell everybody apart.

While we were taking the bow net apart, I could see either LH or JX incubating their nest. I went to check to make sure they still had three eggs and they did. I will be very excited to see JX raise her first chicks! Nothing was happening with the other pair there or with YK & unbanded along the Galveston shoreline. We could not find 16 & F9A anywhere. Did they sneak off somewhere to nest?

We found 10 or 11 youngsters on the Sportsman Road docks. Y0Y, a chick from last year, was looking a bit like the it had a halo and giving us the evil eye for disturbing them. 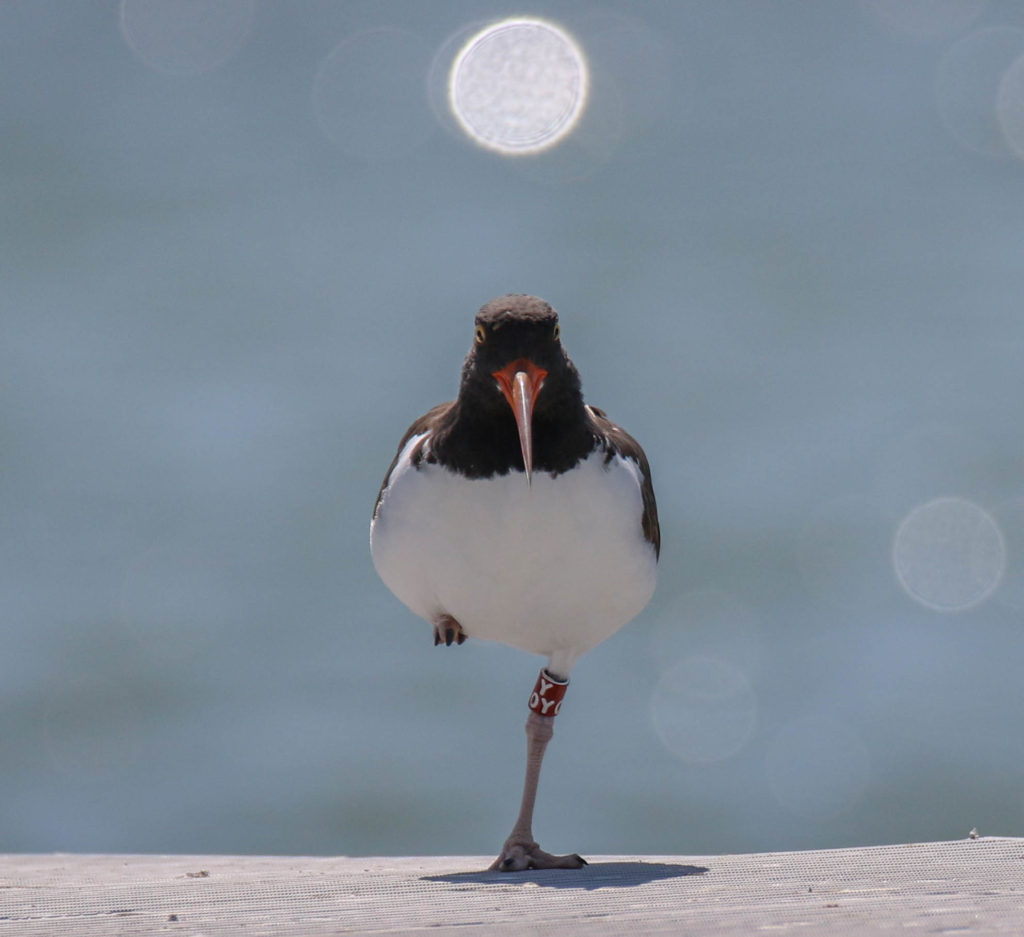 When we got down to the Gangs Bayou area we saw four oystercatchers having an aerial dual. It appeared to be two pairs duking it out and I wondered if one of them 16 & F9A fighting for a territory down there. We never did figure out who they were. There is already one pair that nests there (or tries to nest I should say) A4A & unbanded. We saw one of them on the oyster balls along the shoreline of the island but the other one was absent at first and we thought they might have a nest. A little while later we saw them together on the breakwater though so I guess not. We will have to check this out in more detail next week and see what those other pairs are up to.

All was well on South Deer. A1A & unbanded, A5A & unbanded and Y7 & unbanded all were incubating three eggs. Here’s a photo of A5A or his mate on their nest. 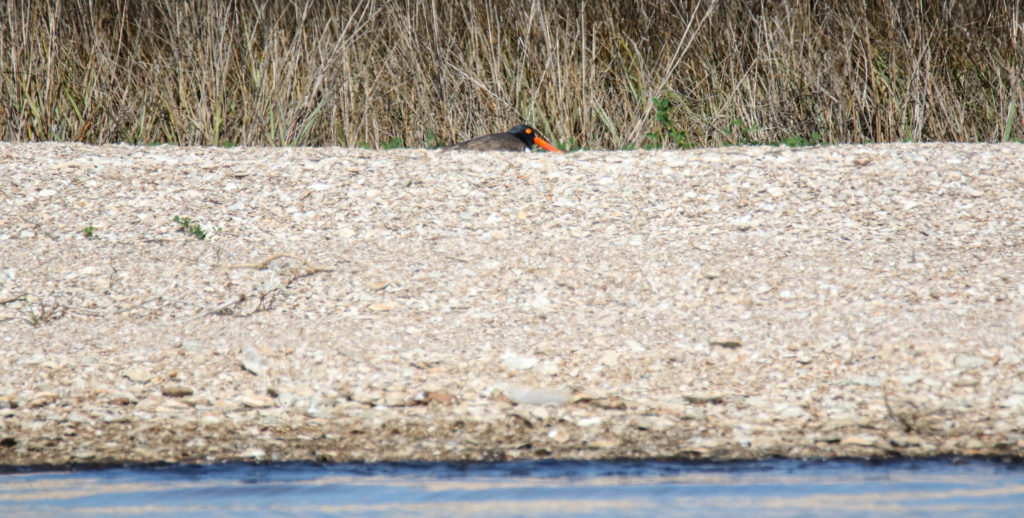 When we got to F1A & E2A though there was a bit of excitement. F1A was out on the reef and we saw E2A slink down from where the nest was. Since they had only one egg I wanted to check if that was still the case but when I started to head up there they both got very excited and started calling loudly. 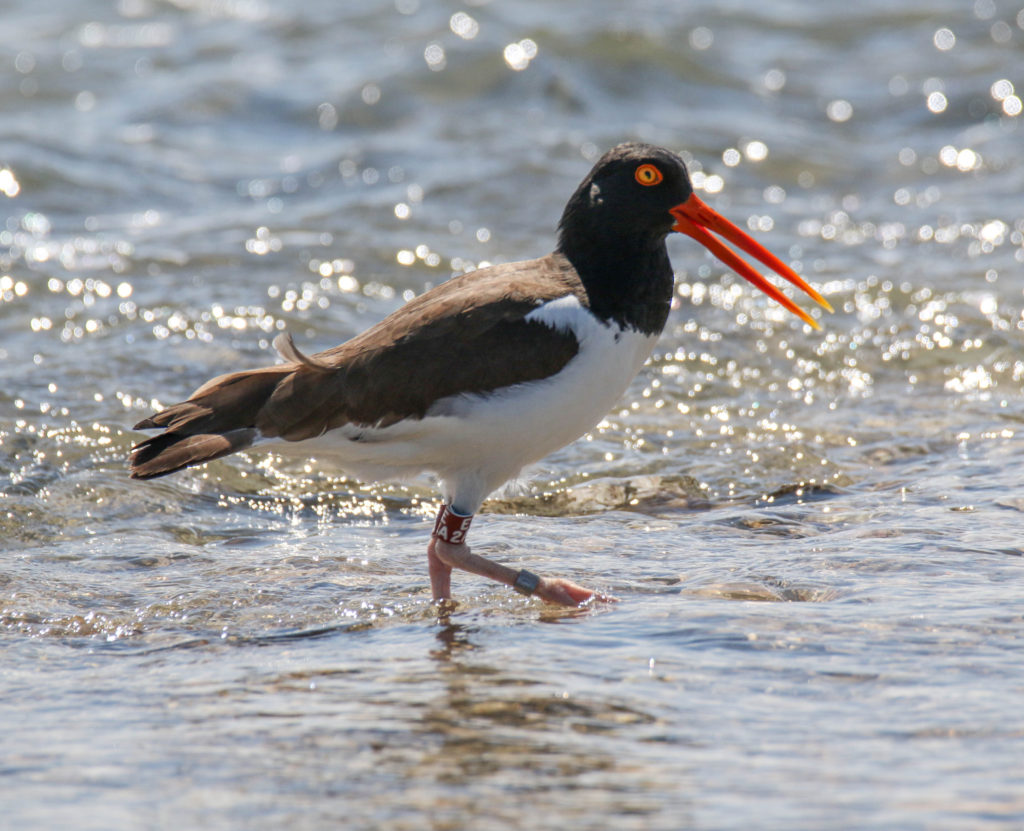 I discovered the egg was gone and decided it must have hatched since the adults were so antsy. I didn’t find a chick but I didn’t hang around long looking. There was lots of vegetation where it could hide and they were already upset enough. We’ll see the chick soon enough. Another nest hatched! They pulled this one over on us for a few weeks! We’ve only known it was there for two weeks and it takes 28 days for them to hatch. Little sneakers!

We made our way through the reefs to North Deer and found C1A & unbanded lounging along the water’s edge. Get with it! YM & JH were in better shape with a new one egg nest. The pelicans are already starting to move in so they best get on with it.

J6 & UF were still absent from their island and when we went over to check where they had a nest last week they were both there with one of them incubating three eggs in their stick nest. That nest is so weird! It just shows how hard these birds will try to raise chicks even when the odds are against them. You go J6 & UF! Do your own thing and beware the pelicans!

JJ & P4 were on a reef this week so despite not seeing JJ last week, it does not appear he was on a nest. W5 & JC fooled us into thinking they had a nest because one of them was laying down in a very incubation type pose but we found no eggs.

From a distance I saw one of FR & unbanded running off gulls so I figured their nest was still intact. It was with two eggs. They only laid two eggs last year too and they fledged two chicks so I guess they decided that’s all they need! FR has definitely mellowed in his old age. He hardly reacted to us being there. That is a far cry from when he used to chase the boat every time we so much as dared to pass by his island. That makes me sad because it shows he’s getting old. I know how you feel dude!

CA was incubating three eggs while his princess, Y2, was lounging on the breakwater. Good daddy! And the last pair, E4A & unbanded, were incubating their eggs while dealing with this: 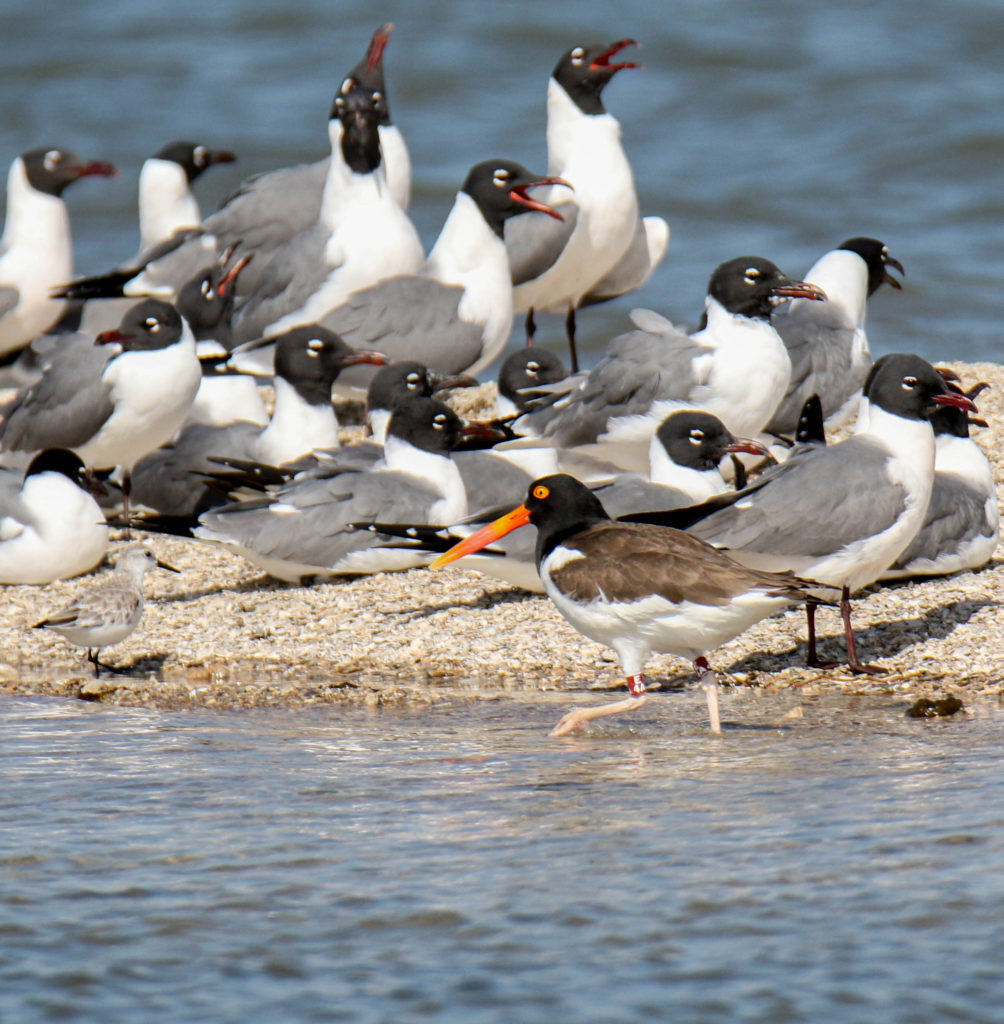 Yes folks, the Laughing Gulls are returning to nest and that spells trouble for the oystercatchers. In a few weeks the islands will be covered with gulls and pelicans and all oystercatcher eggs and nests will be in peril. Stay vigilant my friends!