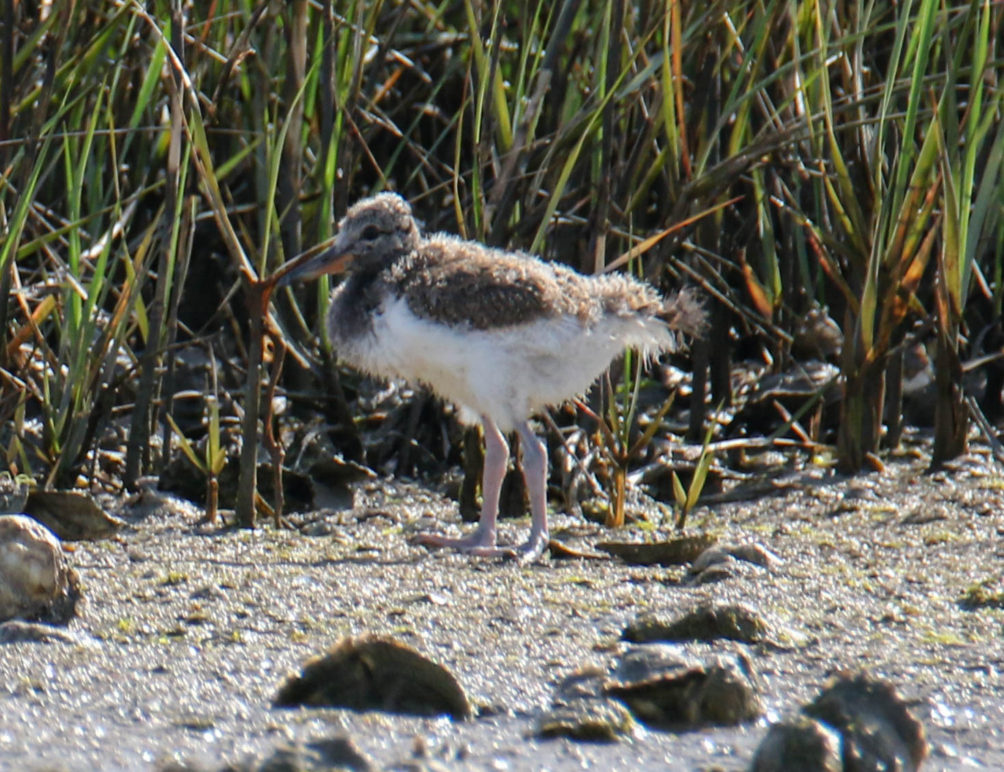 On Tuesday, Taylor, Kenlynn and I made our first foray out to East Matagorda Bay. The number of pairs out there has dwindled from ten in 2011 to just four last year so I wasn’t sure what we would find. There was an unbanded pair on a reef by Chinquapin but that isn’t a nesting spot so we’ll have to see where they end up. Farther along the GIWW, we found a single unbanded bird that was guarding a scrape. No sign of her mate anywhere but she was petty attached to that spot. I bet she will lay eggs there soon.

The islands along the GIWW where pairs nested in the past are all too eroded for nesting now and we didn’t find any other birds until we got all the way down to Old Gulf Cut which is nearly to the town of Matagorda. 25 & unbanded were guarding a one egg nest and so was A7A & unbanded. A7A used to nest down by Chinquapin and the male on this territory was C7A. A7A must have replaced him. 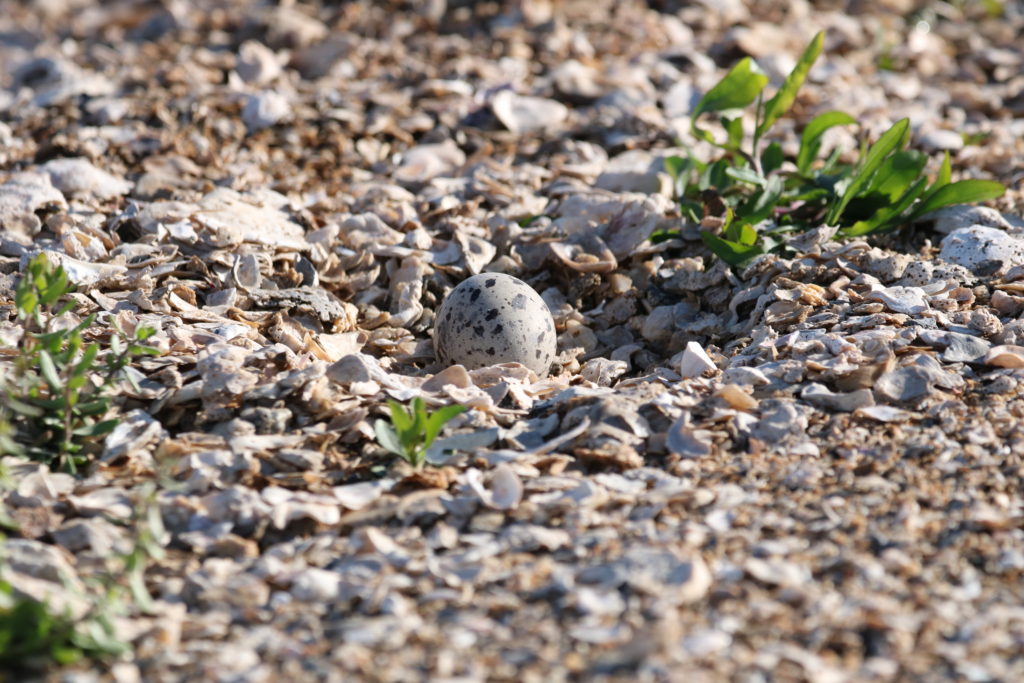 We headed across the bay to the Oyster Farm and found a single unbanded bird there. The wind had picked up considerably and was blowing us right into the island so we didn’t get off and check for scrapes. It was pretty clear the single bird wasn’t incubating a nest. We’ll check it out more thoroughly. We had to head parallel to the wind to get to Dressing Point, the last stop of the day. Taylor and I got pretty wet from the waves crashing over the boat! At least it wasn’t cold outside. There weren’t any oystercatchers at Dressing Point so we headed back to the boat ramp.

On Wednesday, Taylor, Kenlynn and I went to Drum Bay to try to trap one of the unbanded pair we found last week. We had to abort trying to put the boat in at the Swan Lake boat ramp in Surfside because we nearly lost the boat and trailer in a big hole under the water at the ramp. We went to the county park at San Luis pass and launched there. Nice ramp! That meant we had to traverse a long sandy channel out to Christmas Bay that I’ve never been through. The sand was white, the water was blue and it was beautiful! We got stuck on a huge sand bar in Christmas Bay and had to walk the boat a long way. Got our exercise with that!

We finally got to Drum Bay and found the nest was still there so we set up the box and waited. And waited some more. The bird kept walking up to it and then walking away. Finally after about 20 minutes one of them went in and triggered the box. Score! It turned out to be the female and she was one feisty girl. She is only the second oystercatcher ever to try to bite me! We got her banded (E7A) and let her get back to her eggs and we were on our way back to the boat ramp. 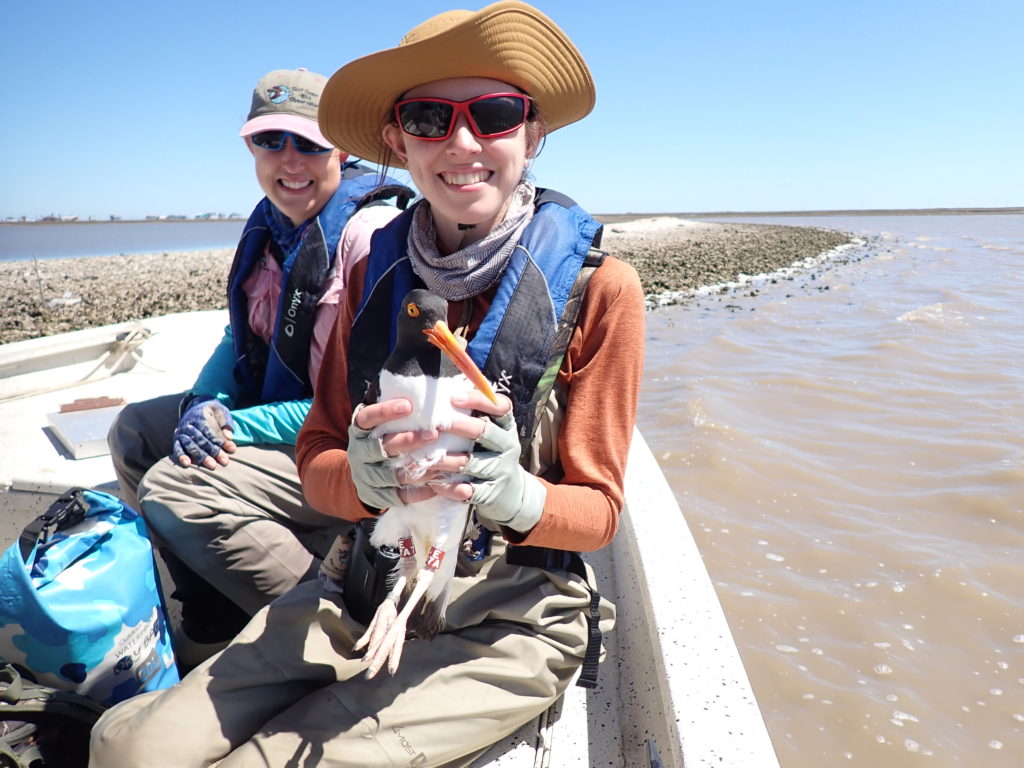 On Thursday I spent the day with Alan mostly in West Galveston Bay though we checked the birds at Swan Lake too. The nest along the Tiki Channel was still there which amazed me. I thought with the 35 mph winds we had last Friday, it would be a goner. Alan suggested we bring some palm fronds on our next trip so that if it does hatch the chicks have something hide under. Good idea!

We made out way up the Galveston shoreline (nothing happening with those pairs) and checked in Swan Lake. K7 & unbanded still have three eggs and none of the other pairs has a nest yet so back across the bay we went. The wind was an issue and it was supposed to get stronger as the day went on. Not good!

We got nearly to Struve Luci, when an oystercatcher flew out and circled the boat. Hello 12. Nice to see you too. I am sure he wasn’t welcoming us but rather warning us to stay away from his chicks but I like my version better! We in fact did not see his chicks because he and the missus had told them to hide. Doesn’t matter 12. We know you have them and we will band them in a few weeks! L9 & unbanded’s eggs were pipping so there will be more chicks there next week! We got a decent look at LT & JA’s chicks. They are getting bigger now so they don’t hide quite as much. 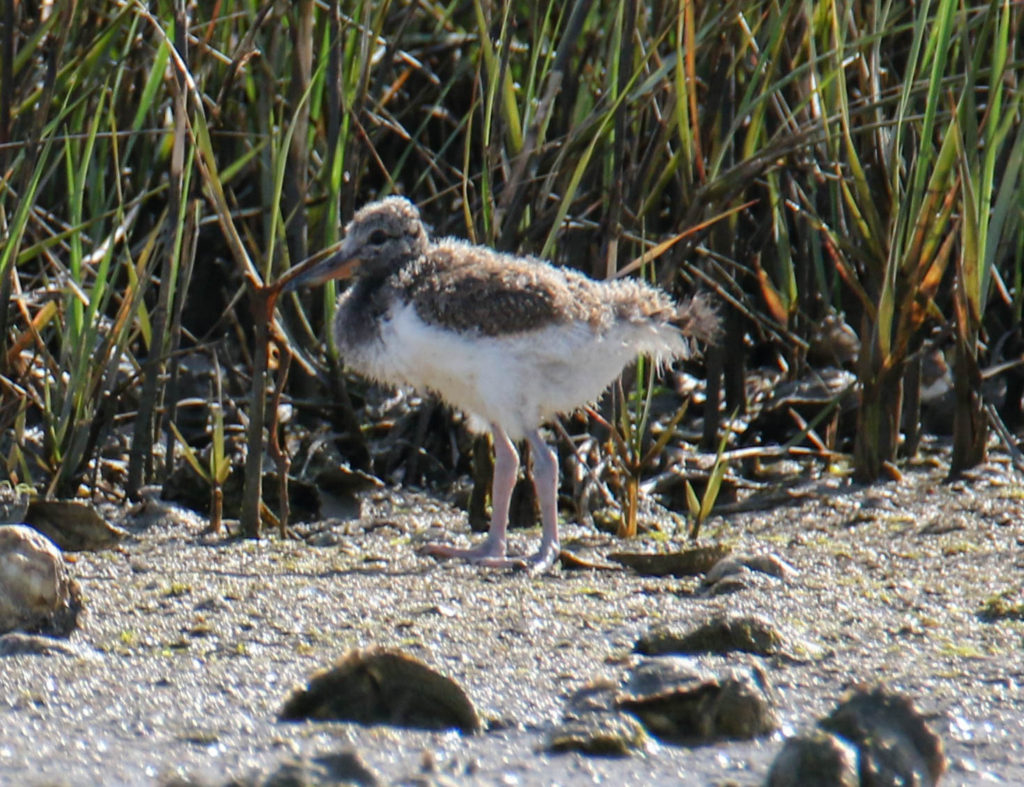 The other nest there was going strong so we moved on to Jigsaw. We didn’t see either LH or JX so I went to check the nest. Whichever one of them was incubating did not leave until I was almost to the nest. The eggs were fine and should hatch soon. We saw YE out on a reef by himself and what does that mean? Say it all together! The other one’s on a nest! I investigated and saw the other one slink away from a high spot. Two eggs! Sadly there was a third egg a few feet away with a crack in it. Darn gulls. 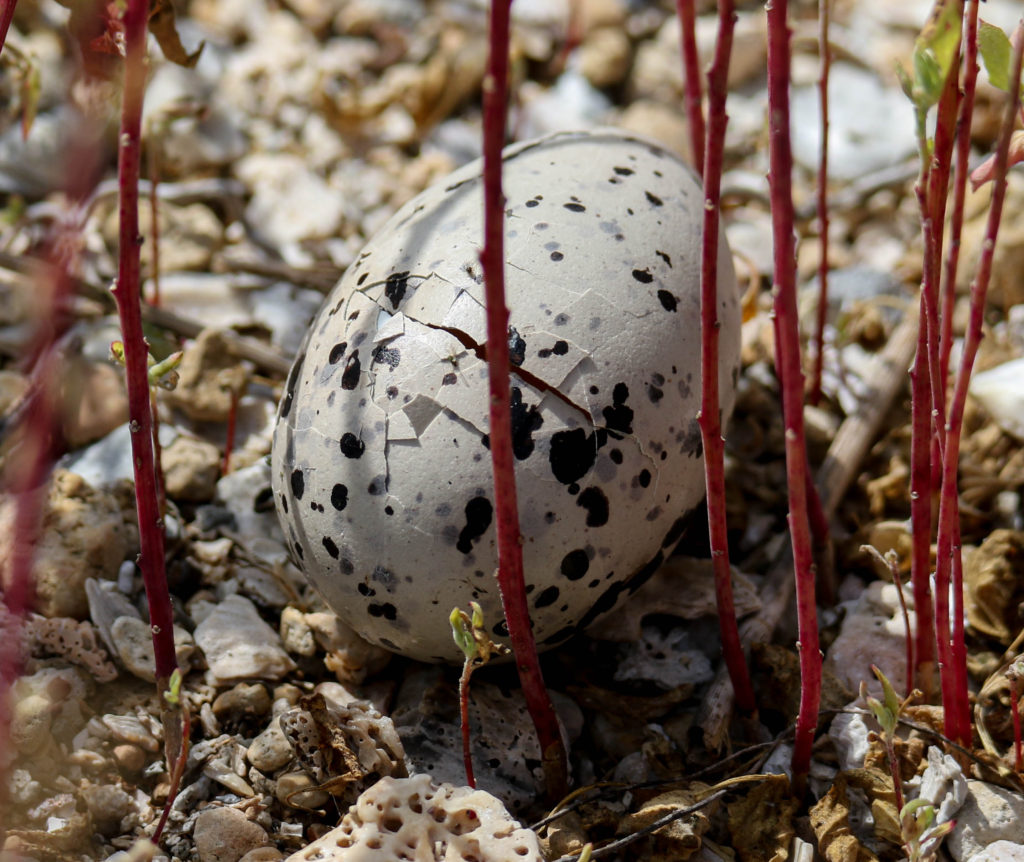 We moved on to the shore of Galveston Island and almost got fooled by YK & unbanded but they still don’t have a nest. There was a troop of youngsters at 8 Mile Road and another troop on the Sportsman Road docks. No sign of 16 & F9A. Where did they go? We discovered a single unbanded bird guarding a one egg nest on the spartina mounds behind the Gangs Bayou breakwater. No sign of a mate so we don’t know who it is. That’s where I thought 16 & F9A might have gone but clearly that isn’t the case.

A4A & unbanded tried to fool us but we found their nest on the island there anyway. A4A was most displeased with us. 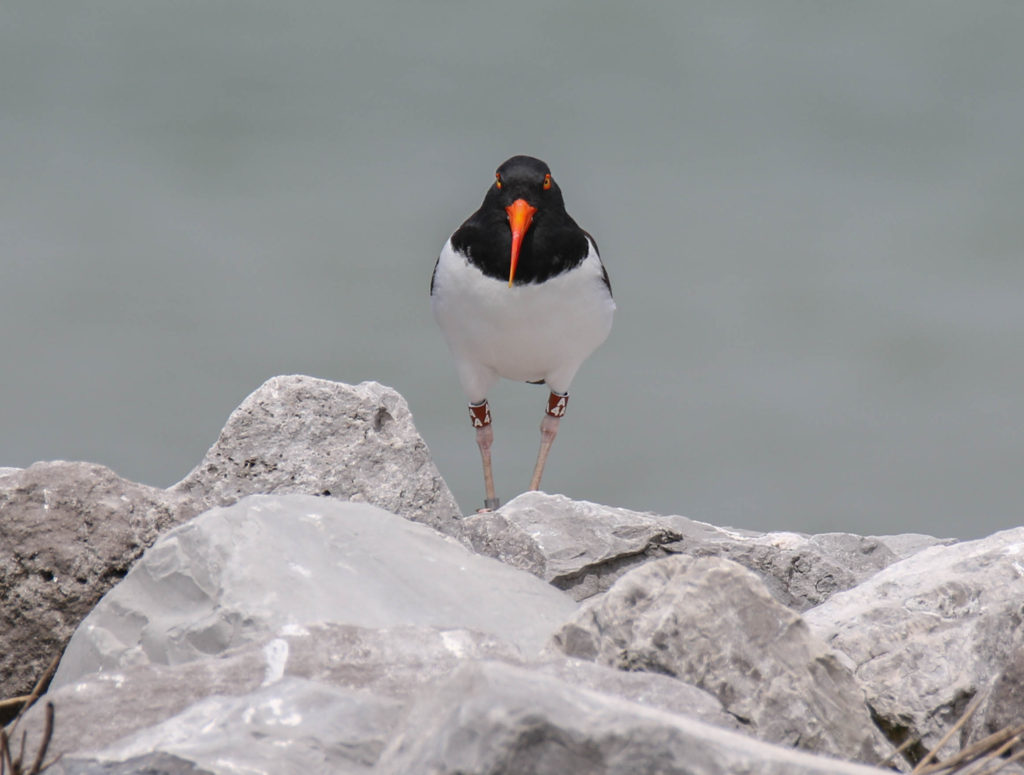 All was the same on South Deer except that A5A & unbanded are down to one egg. It isn’t time for it to hatch so I suspect the gulls are the culprit. Poor birds can’t get a break. F1A & E2A still went nuts when we arrived at their territory so they must still have a chick. I’m sure we’ll see it in a few weeks when it’s older.

Since we didn’t find 16 & F9A anywhere, I wondered if perhaps they had gone across the bay to Greens Cut where F9A used to try to nest. It was a long way out of our usual trek but we needed to know so we headed across the bay. Thankfully they weren’t there as I didn’t want to have to go to there every week, but the question remains – where are they?

On North Deer, YM & JH had increased their egg count to three but the pelicans right behind them also now have eggs. That spells trouble. Alan managed to capture a great shot of JH with a tasty bit. That’s if you like oysters! 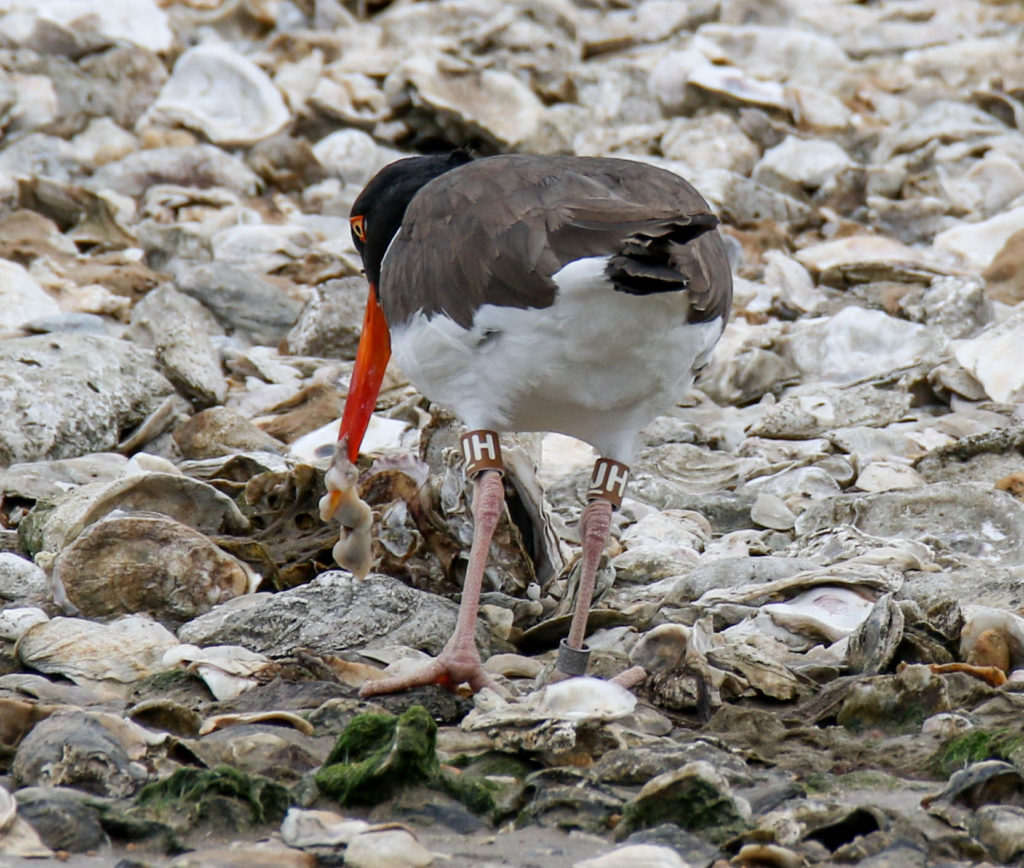 C1A & unbanded finally have an egg! It’s about time. Their area gets covered with pelicans too so there’s no time to waste!

We made our way over to check on J6 & UF. UF was out on the reef so I figured J6 was being a good daddy and incubating and he was. Still three eggs. The pelicans haven’t taken over that area yet but it’s still two weeks before it will hatch and then five more weeks until the chicks can fly. J6 & UF have worked miracles before though so I’m counting on them!

Next was JJ & P4. They have been playing games with us for weeks. One week, we’d see one. Then the next week we’d see the other one. Then one week we didn’t see either of them. I figured they had a nest somewhere but we weren’t having any luck finding it. We saw P4 out on a reef trying to be invisible.

No JJ. Where is that nest?! We motored around searching the shoreline from the boat and then Alan noticed that suddenly JJ was walking towards P4 on the reef. The nest had to be on the shoreline right there somewhere so I went searching on foot and finally found three eggs! I did a float test on them to see how old they were and all of them floated to the top of the cup. That means they are pretty old! As the chicks develop, the eggs get more and more air in them and so they float higher and higher in the cup the older they get. Those darn birds have had this nest for quite a while! Sneaky, sneaky, sneaky.

The wind had picked up considerably and I was getting pretty tired but we still had a few more pairs to check. FR was standing at the other end of his island from where his mate was incubating the eggs. She tried to sneak away but I saw her walking down the reef. As we headed from there over to check CA & Y2, I saw one of them walking away from their nest too. And the same thing happened with E4A & unbanded, so all was good with those nests.

Next week there are four to six nests due to hatch. Chicks everywhere!