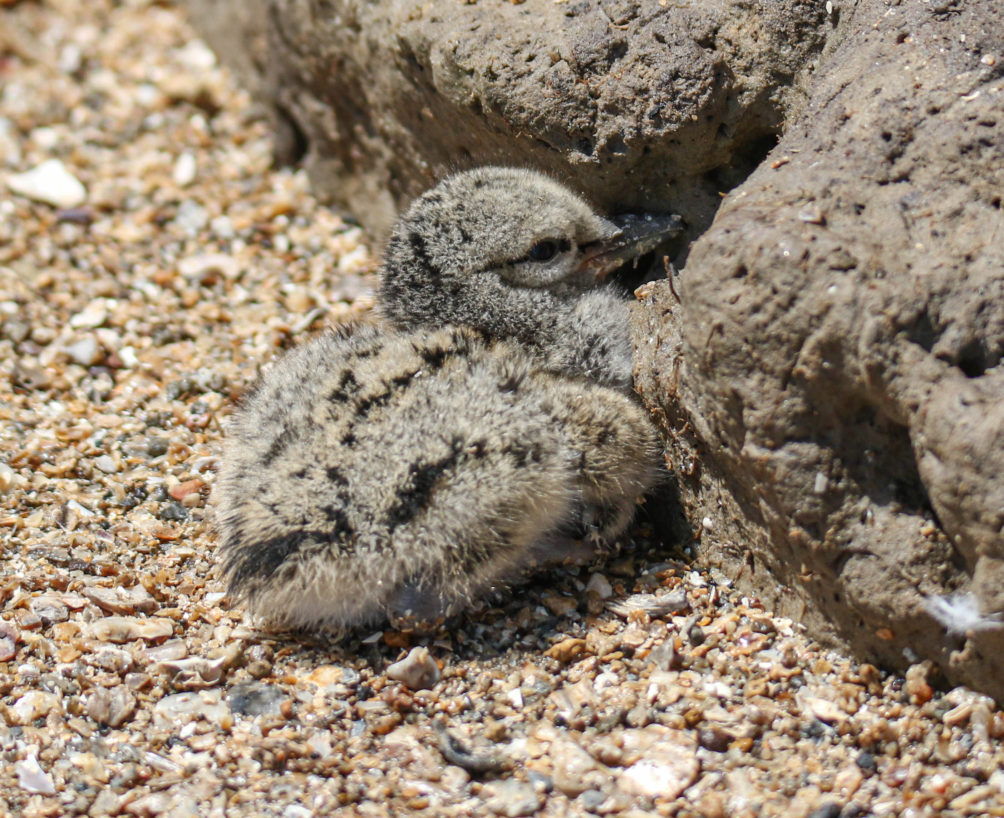 It was windy, windy, windy all week and then miraculously on Thursday it was almost a perfect day. Alan and I were joined by my friend Rich Kostecke, an independent avian researcher from Austin, on our weekly trek through West Galveston Bay. Since we hadn’t been able to check Swan Lake last week and the tide was going down, we headed that way first. It’s shallow up there and a super low tide means we have to go super slow. I am not a fan of super slow!

I figured the two pairs along the Galveston Bay shoreline would have nests but only LR & unbanded had decided to lay eggs. Rich and I found two eggs in a nice scrape. 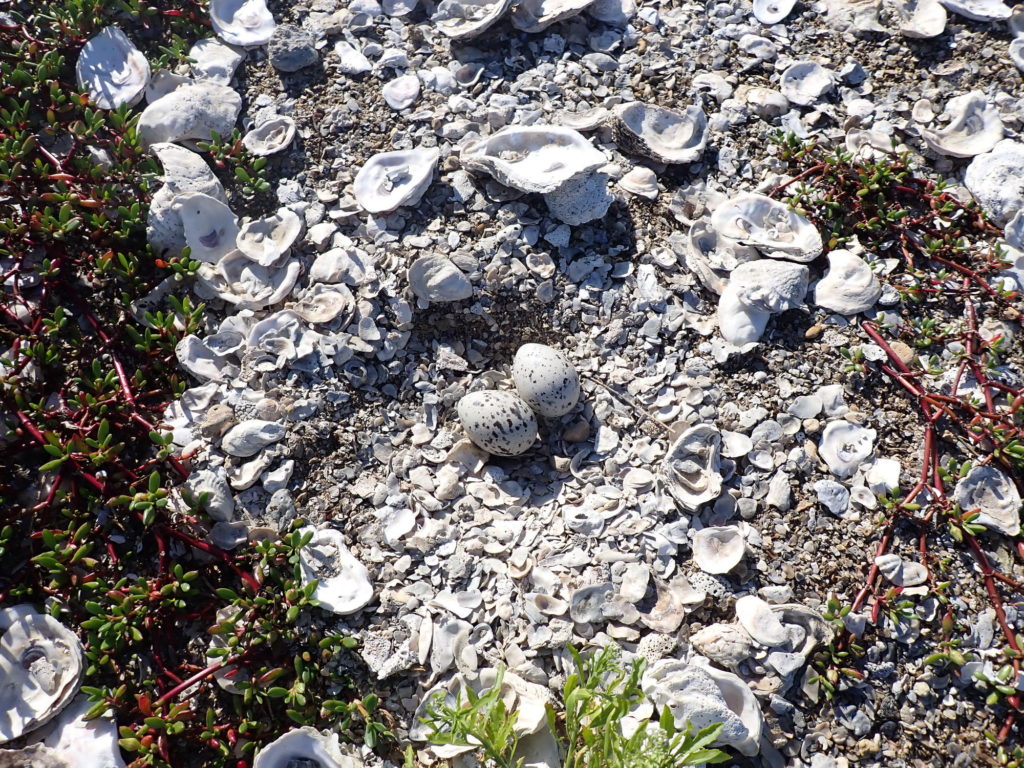 In Swan Lake proper none of the pairs were doing much except K7 & unbanded. At first we only saw the unbanded bird and she was quite upset when we approached. It was time for their nest to be hatched but I needed to verify. When we got close, K7 erupted from the vegetation near where the nest had been. I figured the chicks would be right there but we couldn’t find them. K7 & unbanded are legendary for being able to hide their chicks from us. One year, we had four people searching three different times and we never found them. They went unbanded! We shall see what happens this year. As we were leaving, they seemed to get into a squabble with the pair next door and 39 was not happy! 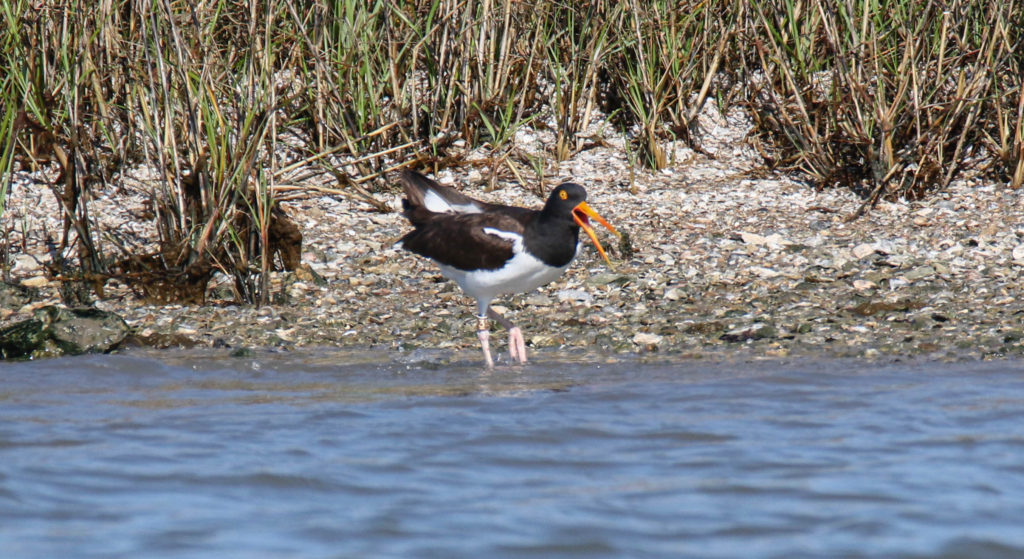 Since they’ve been neighbors for quite a while, I’m sure they settled it fairly. Or maybe it’s more like the Hatfields and the McCoys. You just never know.

Back in West Galveston Bay, we headed to Struve and discovered that right on time the skimmers have returned.

I counted 52 of them on the reef but there were more on the docks. How do they know when to return? I guess they don’t have to worry about getting confused by daylight savings time like us silly humans!

LT & JA’s chick ran to hide when we motored by so I guess it can’t quite fly yet. This is the best photo Alan could get of it. 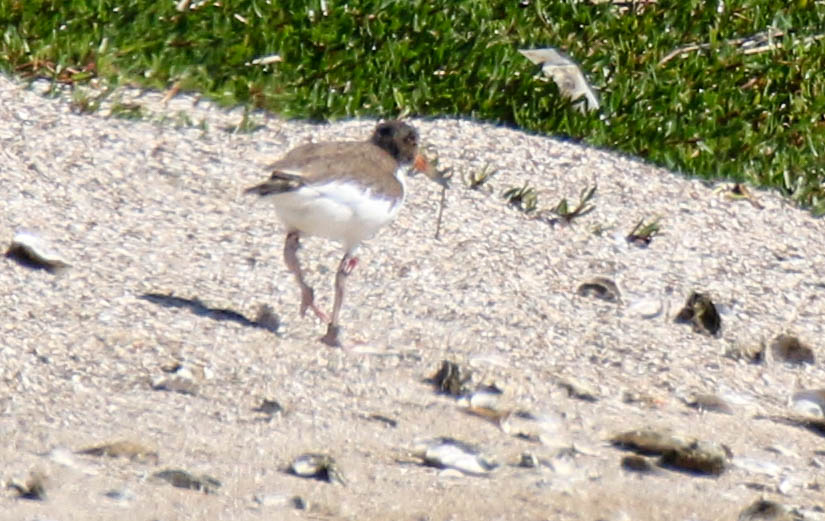 We didn’t see any chicks with E5A & unbanded but Kevin reported seeing them with one small chick early in the day so we know they have at least one! A Great Blue Heron was hanging out in their territory much to their ire. 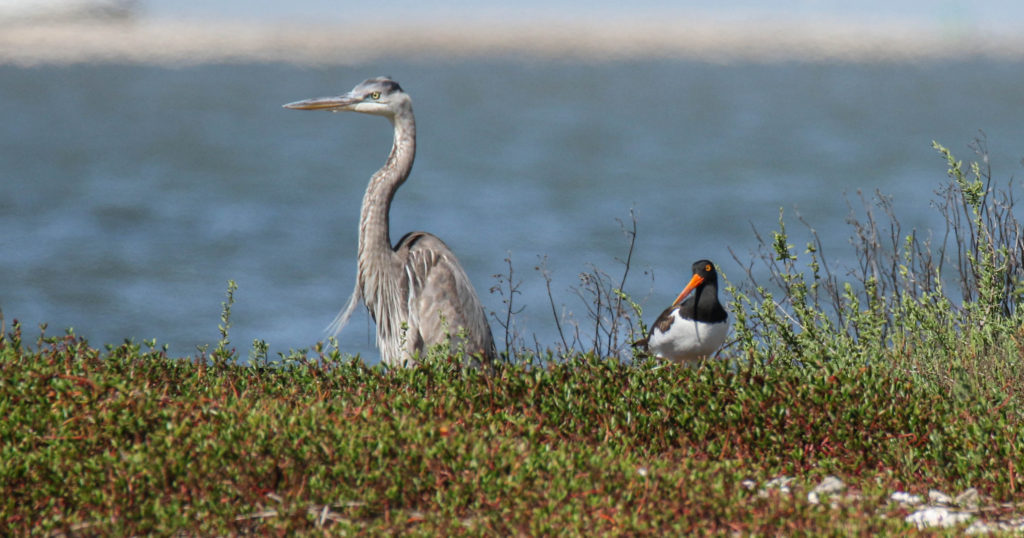 Sure hope it doesn’t eat the chicks. We ran it off when we got the chance but it could easily come back. 12 & unbanded were flying around raising quite a ruckous but that didn’t stop us from rounding up their chicks and banding them. Meet X3W and X4U. So cute! 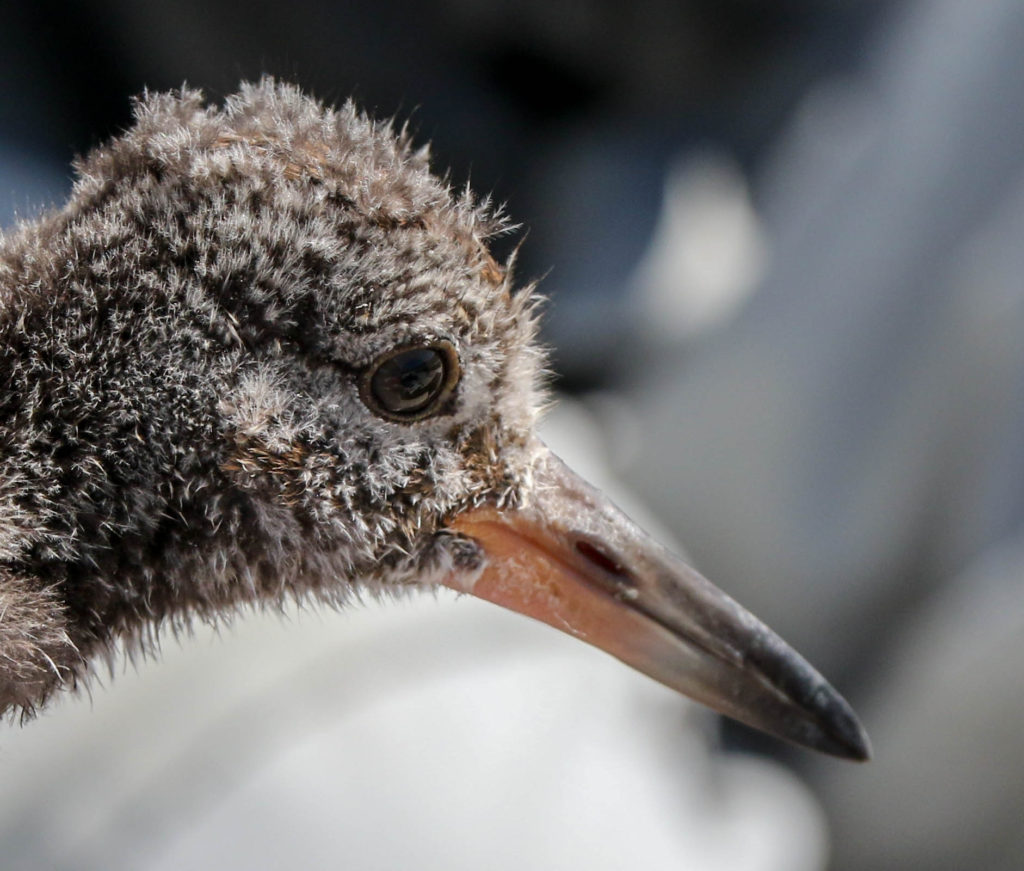 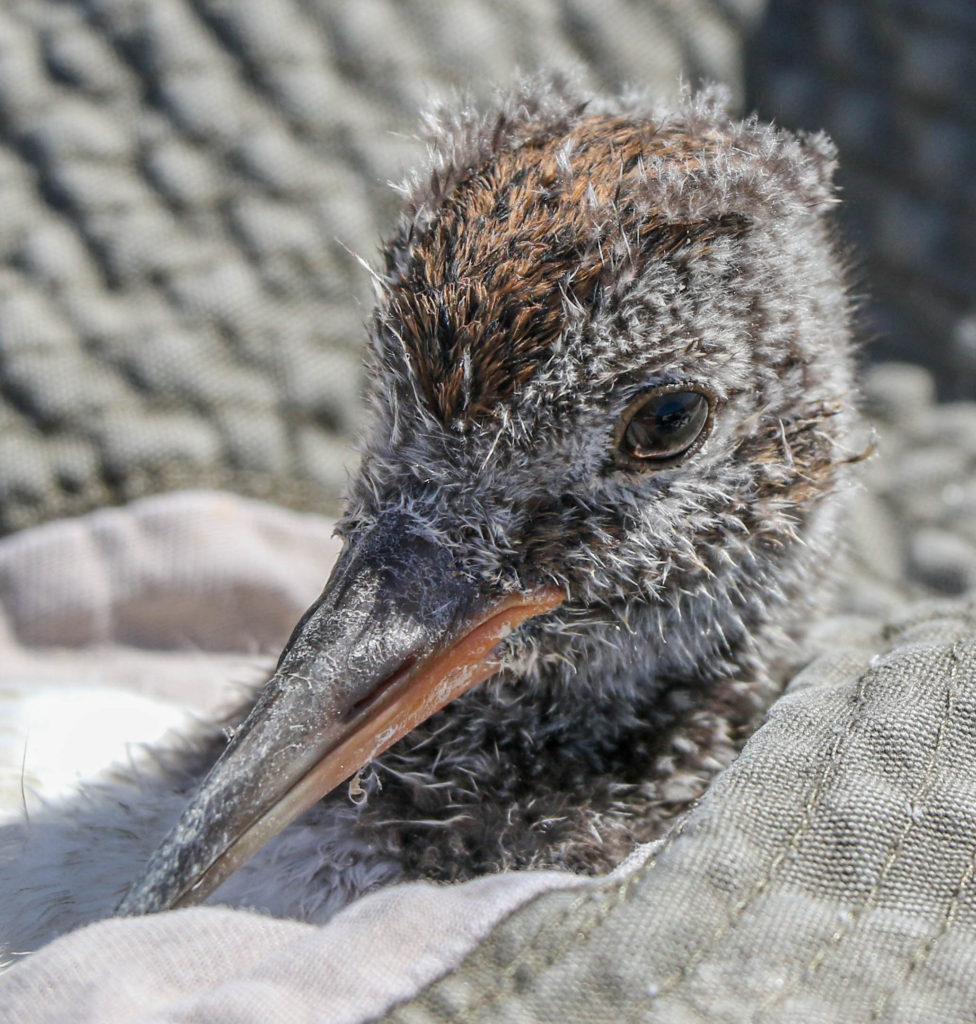 Rich got to hold his first oystercatchers. 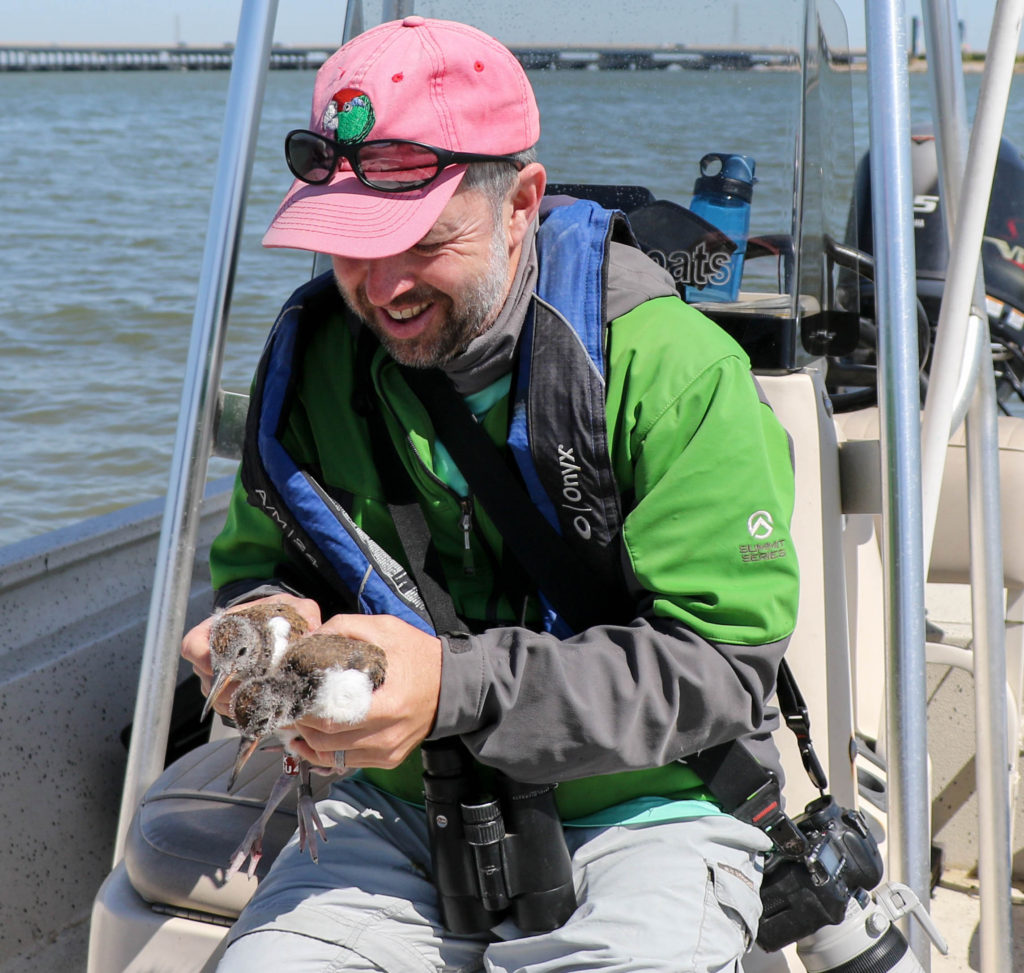 All was well when we let them go and we moved on to the other pairs. HM & X7 still don’t have a nest and there was a caracara eating a dead gull on their part of the island. I sure hope it doesn’t hang around!

It is unclear whether L9 & unbanded have chicks or not. I think they do because they were mostly hanging out on the island near some vegetation but later we saw them both on a reef that’s across the channel from the island. They could have just been both getting food but usually at least one of them stays with the chicks. Of course this could be one of the reasons why they don’t fledge chicks very often!

Things were confusing on Jigsaw. LH & JX were out on a shell bank and the area where they should have been protecting chicks was covered with Laughing Gulls. I smell trouble. I think the gulls must have gotten the chicks. What a bummer. They worked so hard on that nest! On the other hand, YE & unbanded were still incubating their two eggs so all is well there. The new pair on the end of the island, X2 & W2Y had some scrapes but no eggs so I guess they are going to try to nest there. X2 was looking a bit like his petticoat was showing.

On we went and checked on 16 & F9A. They have three eggs now! Go 16 & F9A! This nest is on Galveston Island proper and there are A LOT of predators there. They will be lucky to be successful. We didn’t find any oystercatchers on the docks for the first time in a while but the tide was really low so they were probably all out on the reefs feasting away.

At Gangs Bayou, we found an unbanded bird on the breakwater and then a little farther down, we found C8A. Did their nest fail? When we got around there to check, I found one egg laying a few feet from the scrape with a crack in it and the other one still in the scrape but looking a bit bedraggled. I don’t think they were incubating anymore. Some predator must have gotten to them. Not surprising since this nest is so close to Galveston Island but a shame just as well. Give it another go you two!

A4A & unbanded were incubating their nest so we left them too it and moved on. We checked Confederate Reef for birds since we hadn’t seen any on the docks. We found only six of them. X2W gave us this pose. 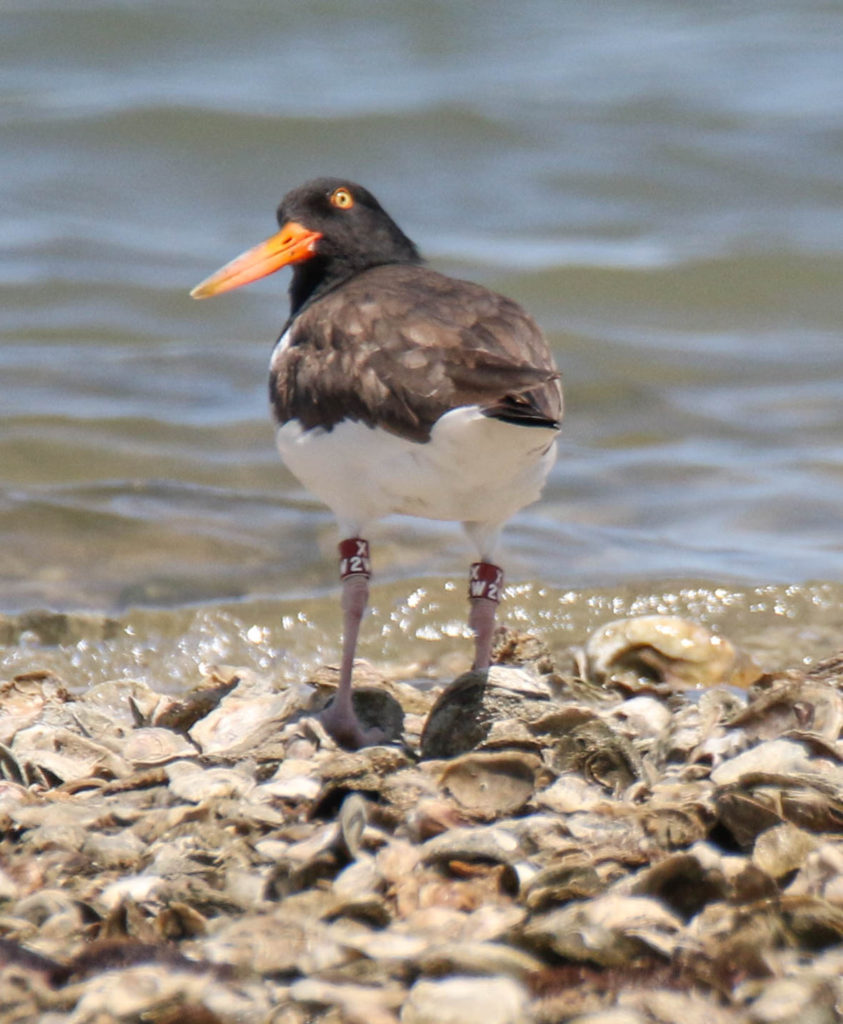 That’s what I feel like the chiropractor does to me when I get an adjustment! Things were a bit confusing on South Deer. A1A & unbanded’s eggs were gone but it wasn’t clear whether they had chicks or not. Same situation with A5A & unbanded. We got better news for Y7 & unbanded though. Their eggs were gone too but I found the cutest little bundle of down huddled up next to a small mud bank. 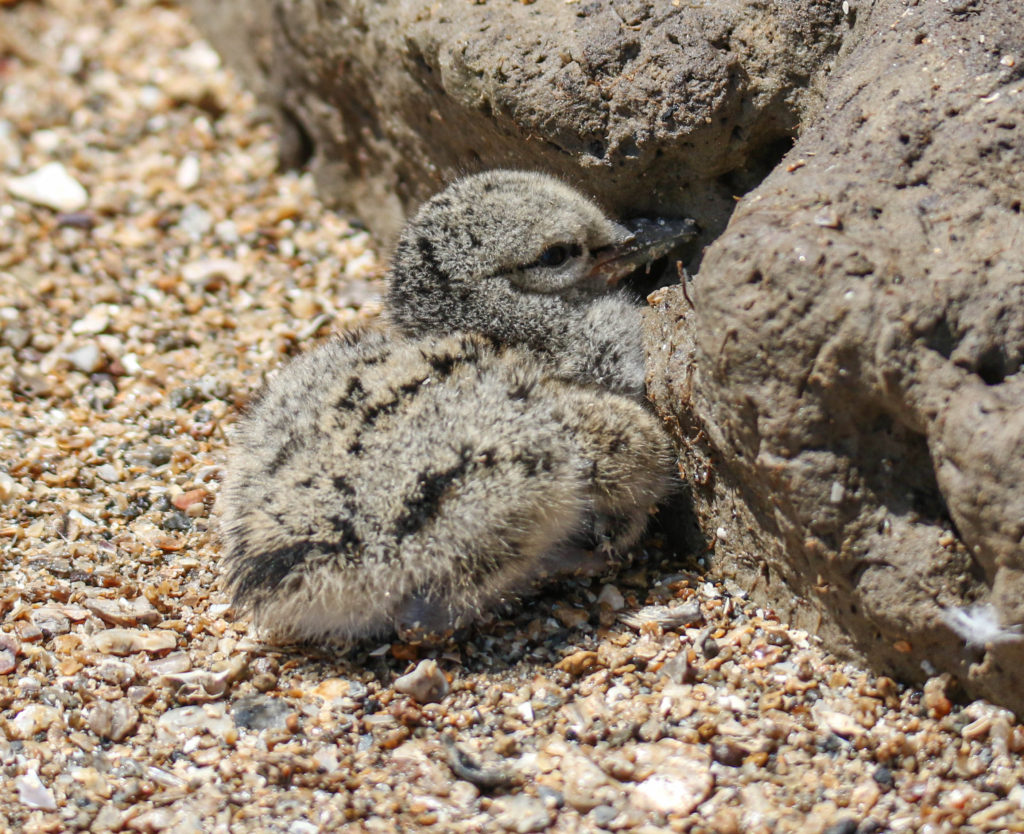 Y7 was there by himself so I have no idea where mom had gotten off to. I was hoping this would be the week we would see F1A & E2A’s chick because it must be getting pretty big by now but it was not to be. We did catch E2A in the midst of a food delivery though. 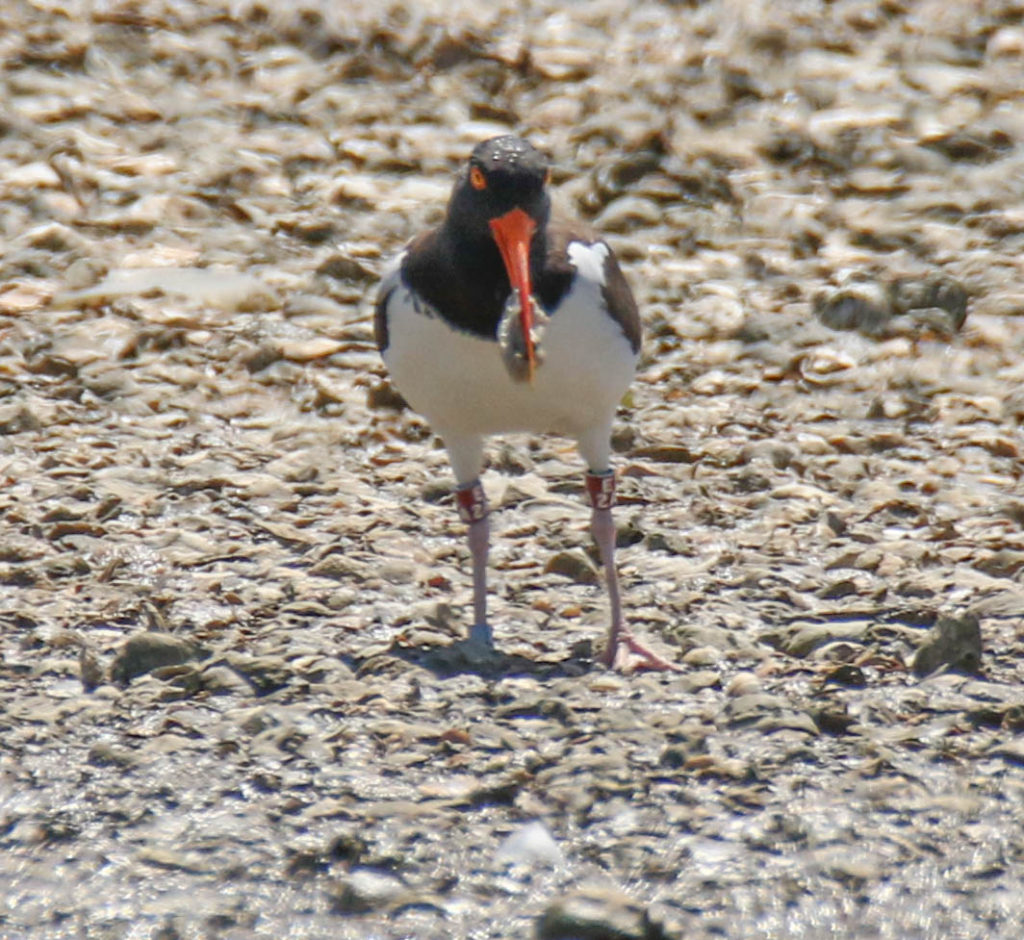 It was pretty funny to see her put the brakes on and then decide she better swallow the food herself instead of taking it to the chick. Busted! We know you have a chick even though you won’t let us see it! Next week we’ll have to find it to band it. That should be fun. Not!

We moved on to North Deer. Only one of the unbanded pair was on the reef and I just managed to spot an orange bill hiding on the shell berm behind a small plant. 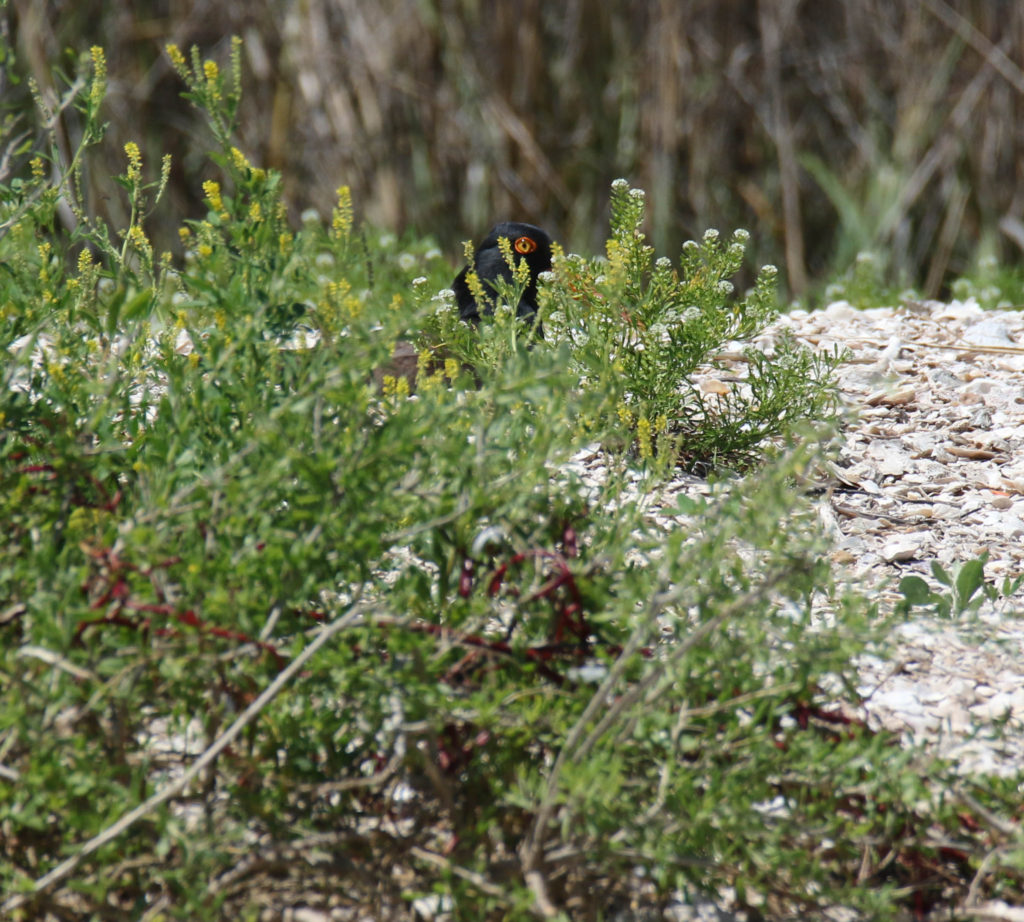 It was time for J6 & UF’s nest to hatch. When we arrived at the spot, we could see the pelicans had finally moved in. We didn’t see either of the oystercatchers and then suddenly there they were on the reef right in front of us. Hiding something you two? I figured that meant they had chicks but then they followed us when we left, flew across the GIWW and landed on the breakwater around North Deer. What does that mean? I have no idea. They are so confusing!

JJ & P4 had moved down to another section of beach because the pelicans had moved in where their nest had been. They got that thing hatched just in time! Alan spotted P4 being followed by two chicks! So excellent! JJ & P4 are both pretty old (~15 years!) and they haven’t fledged a chick in years. It would be so exciting if they managed to fledge two this year. 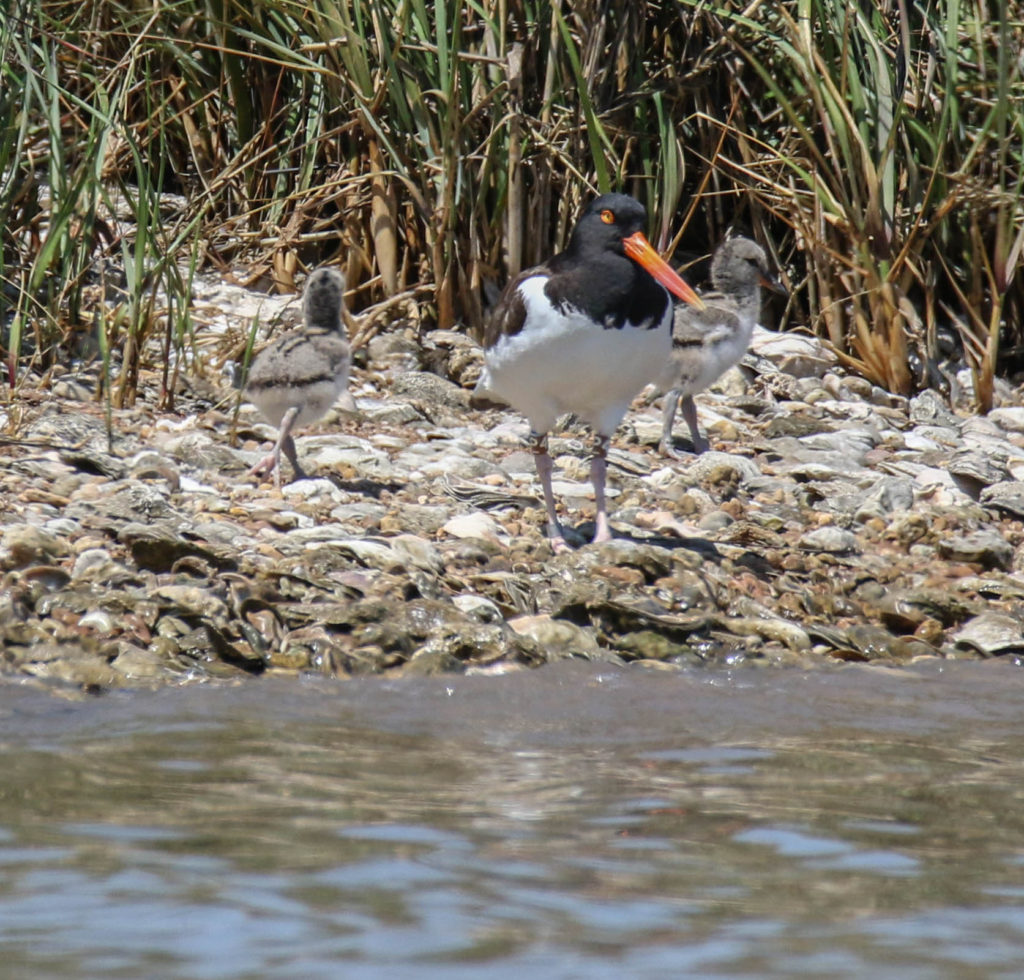 CA & Y2’s nest had hatched and though we didn’t find any chicks I’m pretty sure from their behavior that they have at least one. FR & unbanded weren’t giving anything away either but they also acted like they still had chicks. I can’t get over how much FR has calmed down! He never chases us anymore!

W5 & JC were incubating their nest so we left them alone. Those pelicans are pretty close! Mind your eggs. 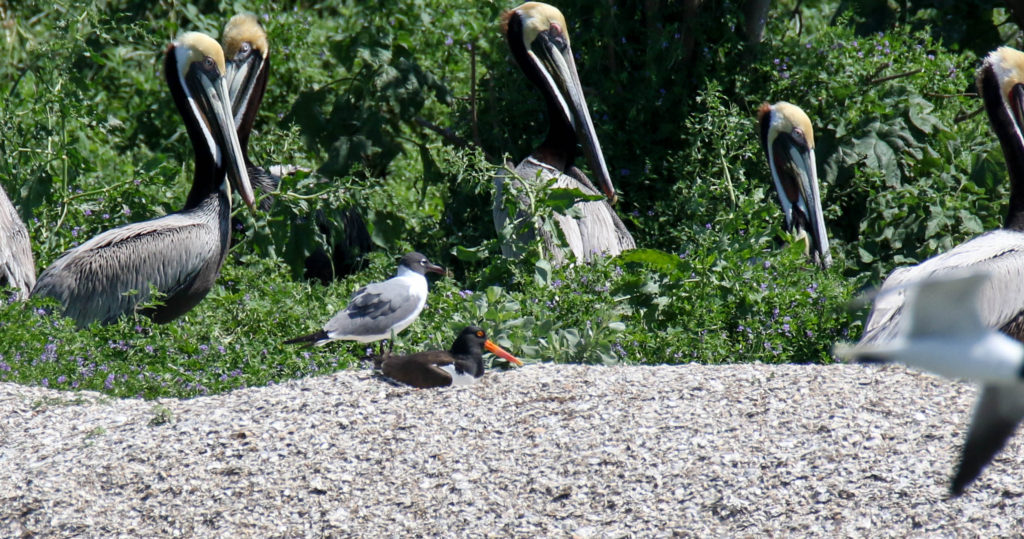 E4A & unbanded’s island was covered with Laughing Gulls and they were not there. I think their opportunity for a successful nest is over now which is a real shame. Their nest was just about to hatch when it got overwashed!

With another survey complete, we headed to the boat ramp!

Since we hadn’t been able to get out to East Matagorda Bay earlier in the week because of the wind, Taylor, Kenlynn and I made a quick trip out Friday morning just to check the two nests we found last time. They were both going strong with three eggs! Yay!

Note: All trapping and banding for this project is in accordance with federal and state permits issued to Susan Heath, GCBO Director of Conservation Research. Bird handling by volunteers is only permitted in the presence of Susan Heath and volunteers are trained in proper bird