We got a break in the wind this week and were able to do a complete survey of the Brazoria Bays. Taylor, Kenlynn and I headed out Tuesday morning after a brief fog delay. We went to the Brazoria County part of West Galveston Bay and checked on the two pairs there. E3A was still incubating three eggs at the mooring facility. Yes! The terns and skimmers haven’t arrived there yet so it was mostly Laughing Gulls. There wasn’t much wind for a change and the bay crossing was easy. That is often not the case.

At Alligator Point there was only one adult present. The eggs were gone but we couldn’t find a chick. The adult flew around calling a bit when we went up and looked and then landed on the end of the island and watched us. There’s plenty of places for a chick to hide there so maybe they have one, but its unusual for only one adult to be present if there are chicks. On the other hand, if there was no chick why would that adult be there and not with the other one wherever it was? So many mysteries!

We headed back down the GIWW and crossed Bastrop Bay. There weren’t any oystercatchers there at all so we went down to Drum Bay to band AR & unbanded’s chick. It was a bit smaller than I like them to be but since we only go there every two weeks, it will be fledged by the time we’re out there again. We saw one of the adults up in the vegetation and easily found the chick hiding there. Meet X4W. May you live a long and happy life! 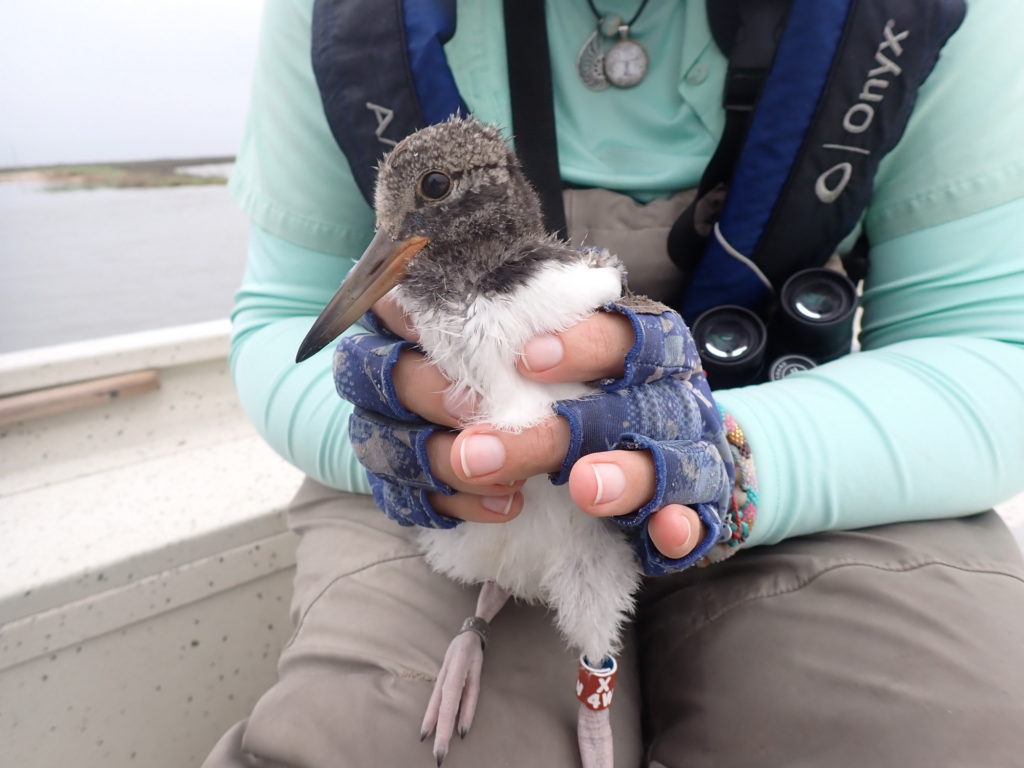 E7A & unbanded’s island was nearly under water and they weren’t there. We found K0 & U7X standing on the shoreline of a different island from the one where their nest was. When we checked the nest, the eggs were gone. I wasn’t surprised. That island is right by a kayak launch and there is a lot of human disturbance there. I don’t think they had a chance. Maybe they will try somewhere else but they don’t really have any good options.

Alan and I had to change our survey of West Galveston Bay from Thursday to Wednesday because of the strong winds on predicted Thursday from a cold front. Kenlynn joined us and we were able to survey the entire area. Things are finally picking up in Swan Lake and the Galveston shoreline! 20 & unbanded were incubating three lovely eggs. 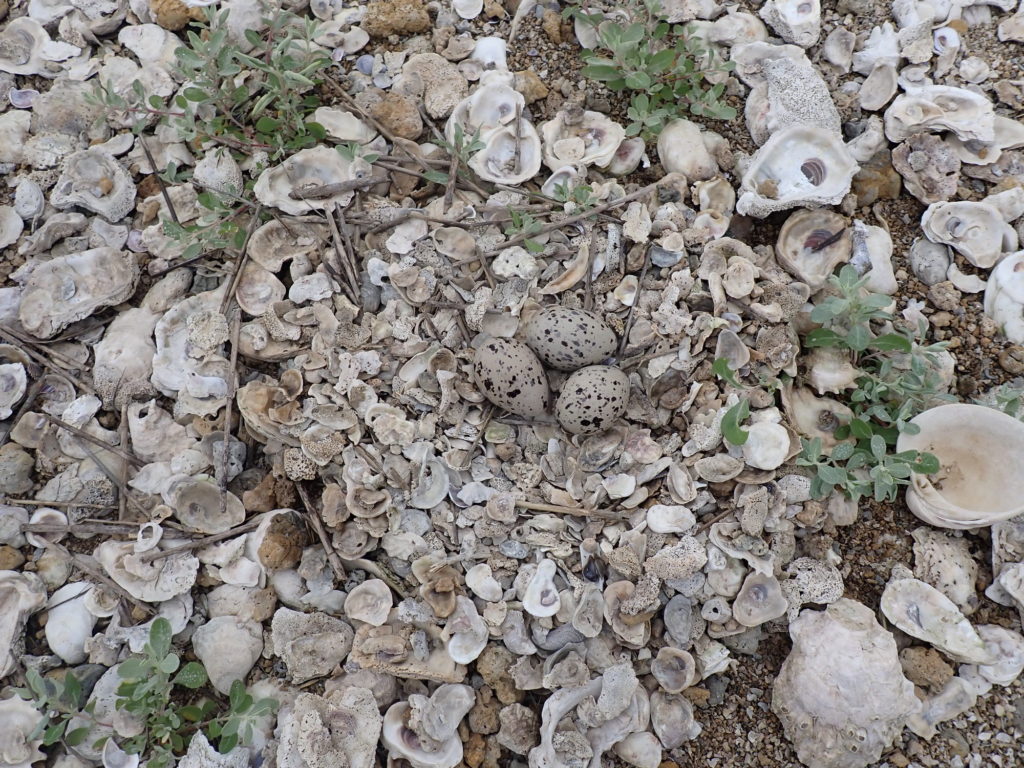 LR & unbanded had increased their egg count to three and both 39 & unbanded and X3 & unbanded had nests in Swan Lake! Lots of egg laying going on up there. 39 & unbanded’s eggs were new but X3 & unbanded egg’s floated to the top of the float cup which means they’ve been there a while. Those little sneakers! I guess we can’t see them when they are incubating because they snuck that nest by us for several weeks. 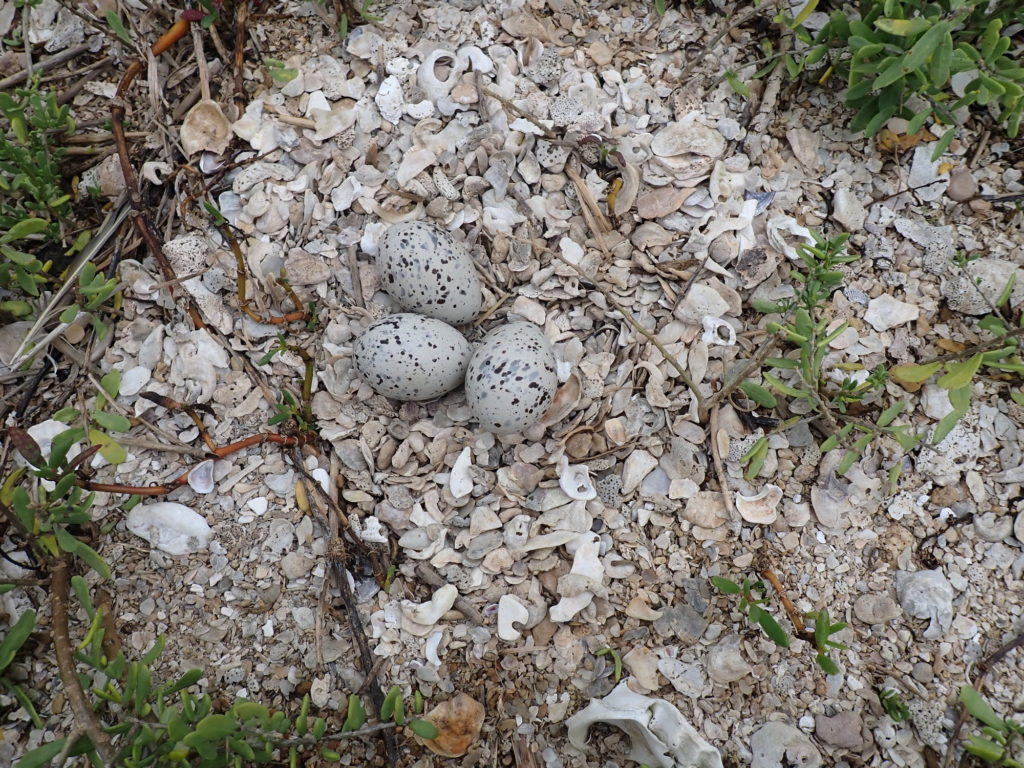 K7 & unbanded flew out to “greet” us when we motored into Swan Lake so it was impossible to tell where they had been and where they were hiding their chicks. We spied on them from afar and saw that they indeed went back into the vegetation after we left so I’m pretty sure they have chicks. It will be a chore to find them to band when its time!

We headed back down to West Galveston Bay to check on things there. This was an unusual day when the wind was out of the south when we started and would switch to the north midday as the cold arrived. I joked with Alan that if we timed it right we could have the wind at our backs on the way to Swan Lake and on the way back, but of course we didn’t have time for those kind of shenanigans. The bay was quite smooth though and it was nice!

On Struve Luci, LT & JA’s chick U0X was hanging out in the open now so I assume it can fly. Because of the skimmers we didn’t test that theory. 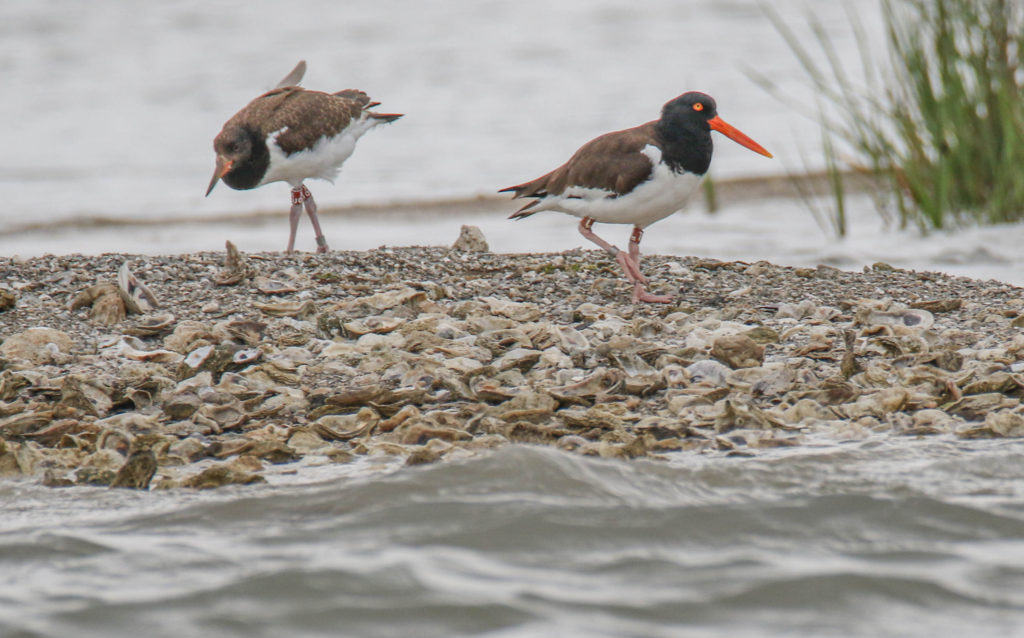 E5A & unbanded were hanging out on a shelly area and not in the vegetation so I’m afraid something got their chick. There had been a Great Blue Heron there last week and it could have easily gobbled down an oystercatcher chick. What a bummer. 12 & unbanded weren’t giving us any info on their chicks, especially after we banded them last week. We will see them next week I’m sure because they will large enough to fly by then.

HM & X7 were hanging out on a dock. Since their part of the island is too low for nesting they usually nest on a rock wall that juts out from Galveston Island but they haven’t done so this year. I’m beginning to wonder if they will nest at all. We haven’t been able to figure out if L9 & unbanded have chicks or not so we made a quick trip on the island to see what we could find. What we found was a new nest so I guess their chicks didn’t make it. Bummer!

We took some time to count the skimmers and the nesting Forster’s Terns for a project we have with the Coastal Bend Bays and Estuaries Program. The skimmers don’t have nests yet but the terns are going strong. This is important data for skimmer and tern conservation!

We moved on to Jigsaw. LH & JX were sauntering along the island shoreline so I’m pretty sure the gulls got their chicks. Such a shame. I went to check YE & unbanded’s nest and found this! 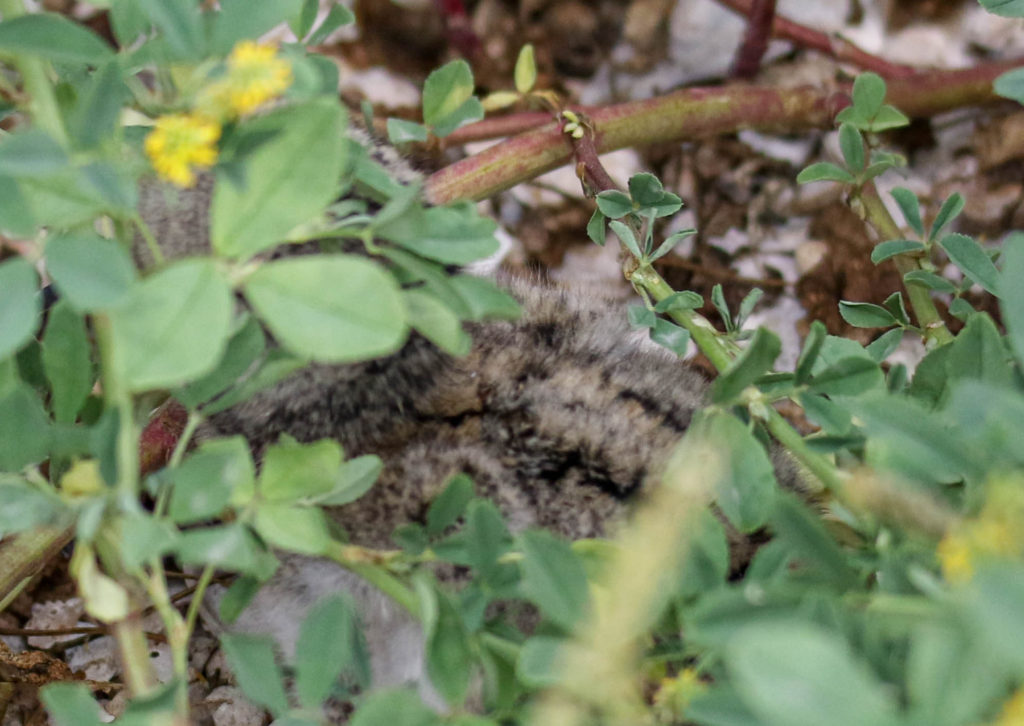 There were gulls everywhere and the chick tried to run so I put it back in the vegetation and we got out of there as quickly as we could. X2 and W2Y were hanging out nearby but we didn’t find that they had laid a nest yet. 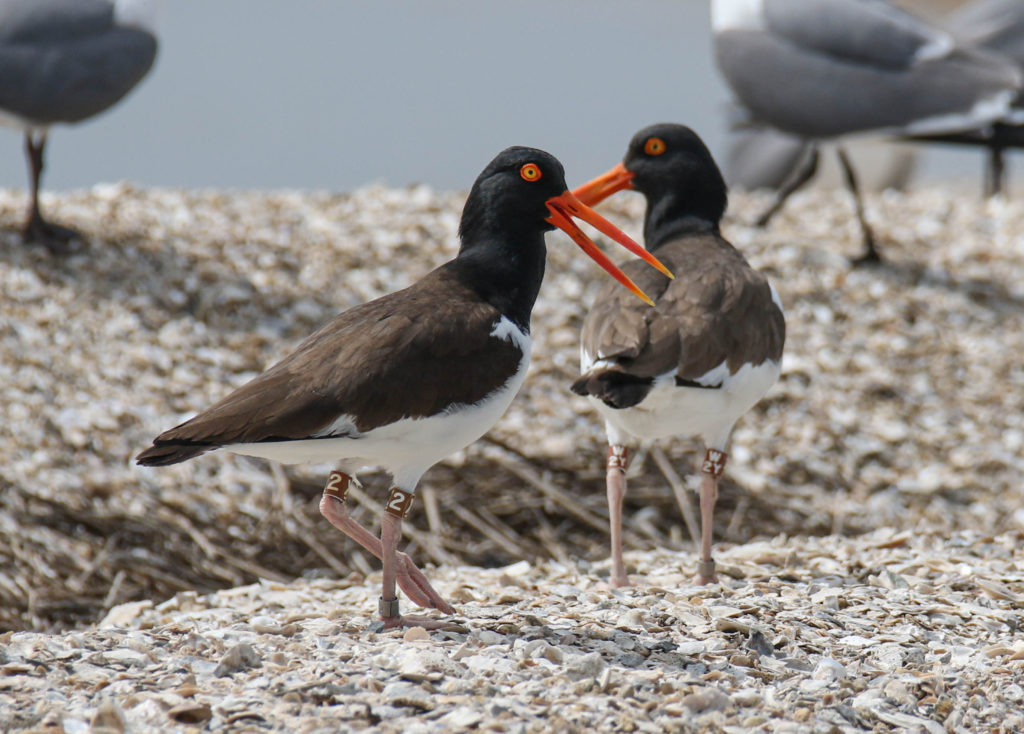 We proceeded on our rounds and saw that either 16 or F9A was incubating their nest. Since that one’s on Galveston Island, I don’t like to walk up to it because it could potentially leave a scent trail for a predator to follow. When I do go check the eggs I use scent away spray to make sure I’m not leading a predator to the nest. Since they already had three eggs last week, there was no reason to bother them so we didn’t.

We found a gaggle of youngsters on the docks and at 8 Mile Road as usual and photographed them so we can document the banded bird resights. Have I mentioned that Alan does all of that for me? That is a huge job and its VERY helpful to me that he does it!

At Gangs Bayou, we did not find C8A & unbanded anywhere and A4A or mate was incubating their nest. 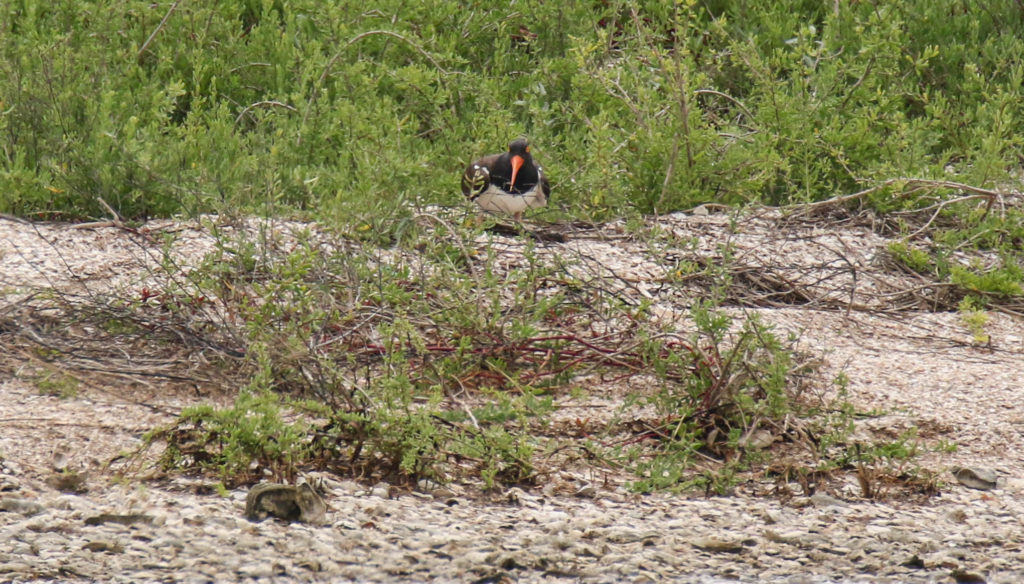 On South Deer, it was still unclear whether A1A & unbanded have chicks. They were acting like they do but time will tell. A5A & unbanded weren’t home so that confirms that their nest failed. So sad. I was totally expecting to not find a chick with Y7 & unbanded anymore because of all the gulls in their territory but I was so wrong and it made me so happy! There they were with a little tike toddling after them. 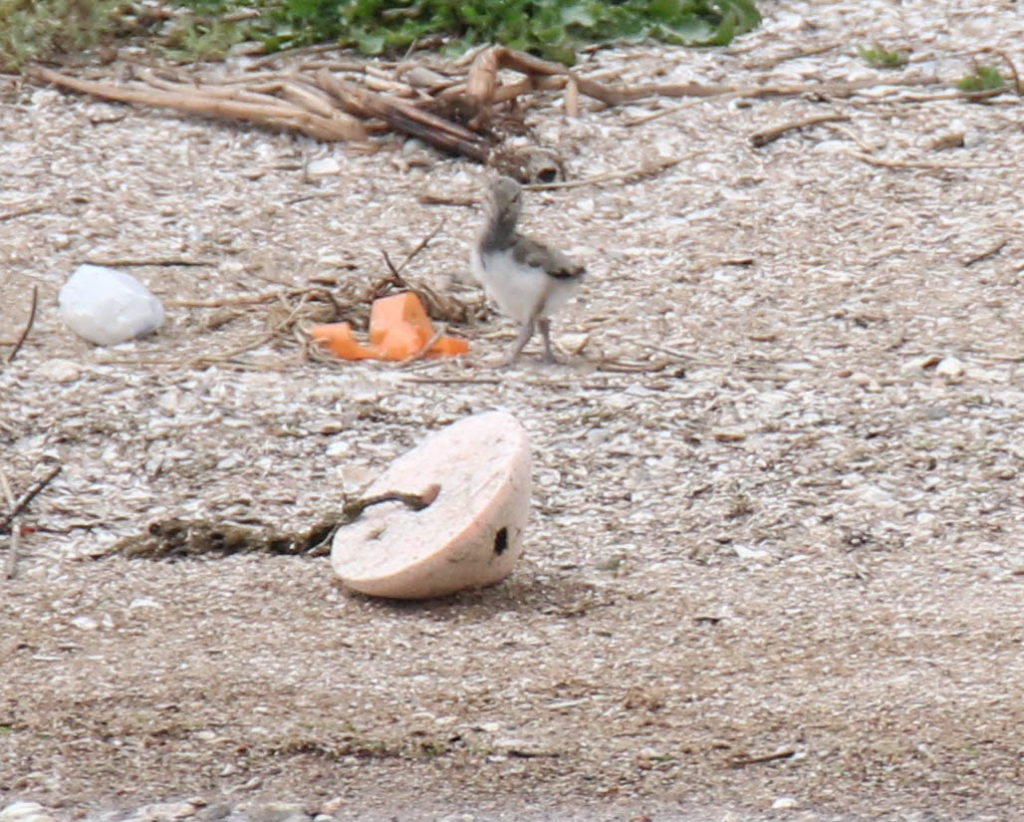 Then it was time to band F1A & E2A’s chick. We had never seen this chick but I knew from their behavior that they had one and I knew they only had one chick because they only laid one egg! Waste not want not I guess. Kenlynn and I looked around and she spotted the chick running down the shoreline. I snagged it in a dipnet (not very gracefully!) and we banded it X4Y. It was pretty big and I’m sure it will be fledged next week. 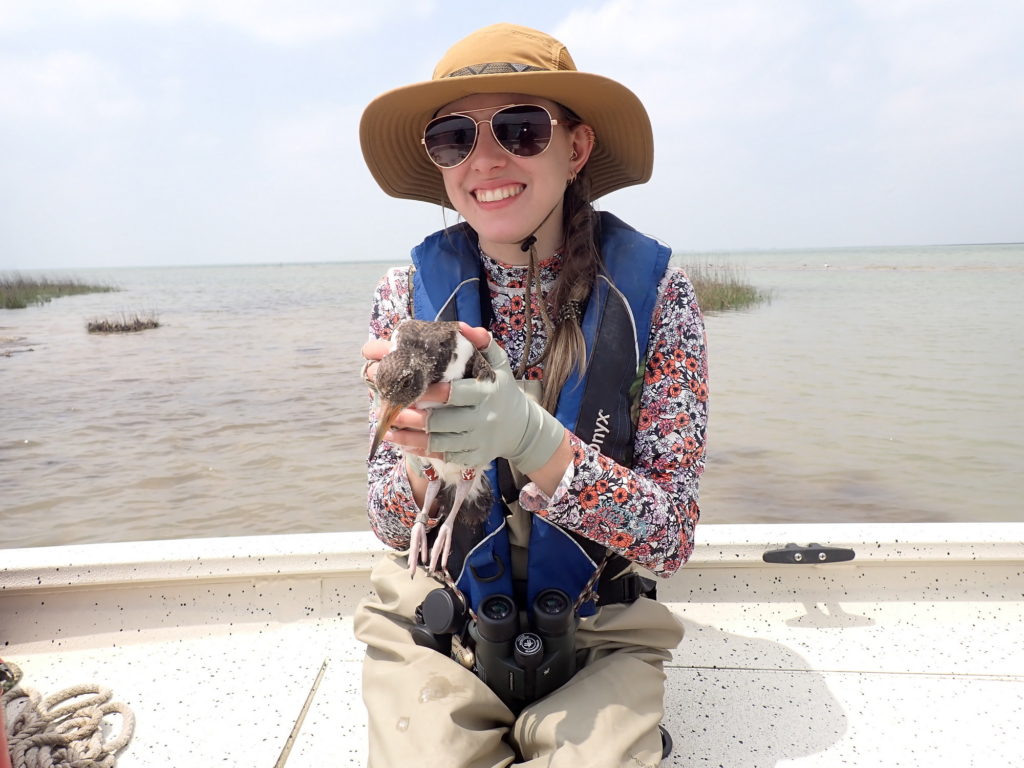 With that job done we proceeded along our way. The unbanded pair on the next island was incubating two eggs so we set up the bow net to trap one. I’ll save you the drama and cut to the chase. The bird went back to the nest and despite me having someone work on the trap tripper it failed again! Dang it!

This time I had an alternate plan though. We pounded a tent stake into the ground holding the bow net open and attached a long line to it. Then we strung the line across the spartina to a place where Kenlynn could hide. Alan and I took the boat away from the island and when the bird went back to the nest, I signaled Kenlynn by waving my arms. She gave it a tug and viola! We caught the female and banded her E8A. She was quite feisty and unhappy but we let her go quickly and she got back to her business. I’m sure she’ll have some choice words for us in the future. 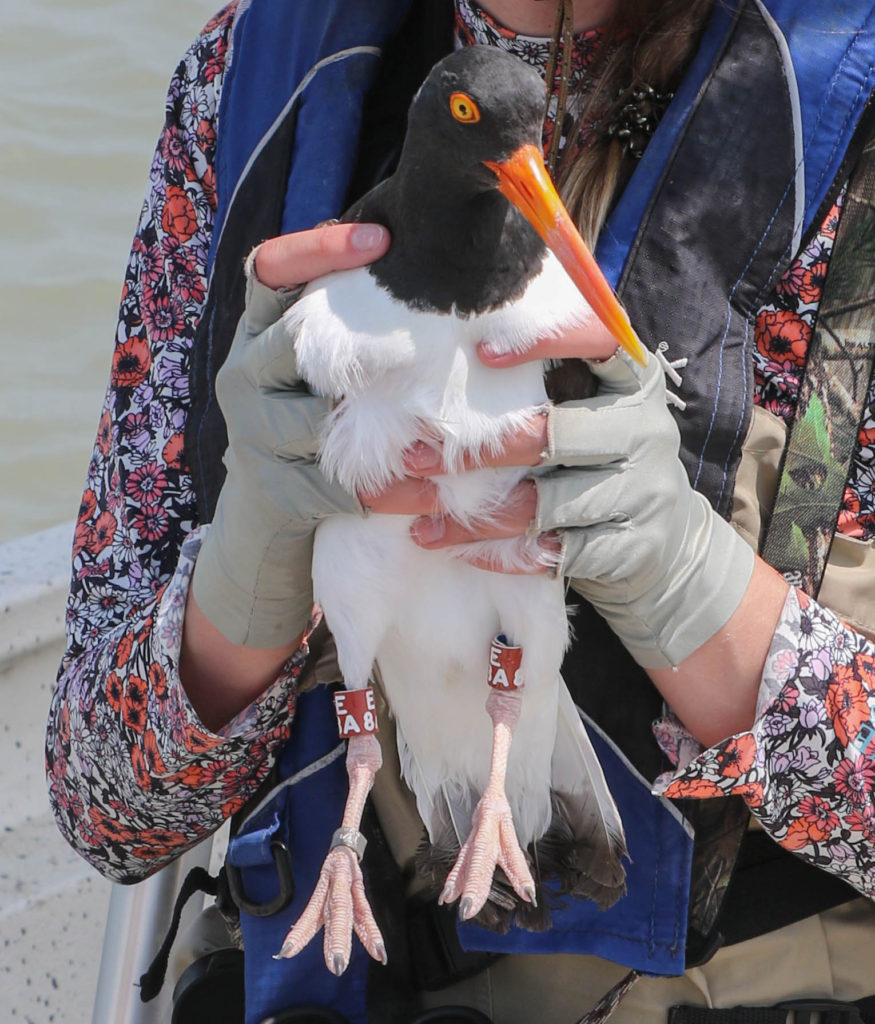 While we were waiting for her to go back to the nest, I spotted our first Diamondback Terrapin of the season. It was on the terrapin tire, so named because we see them on it so much! 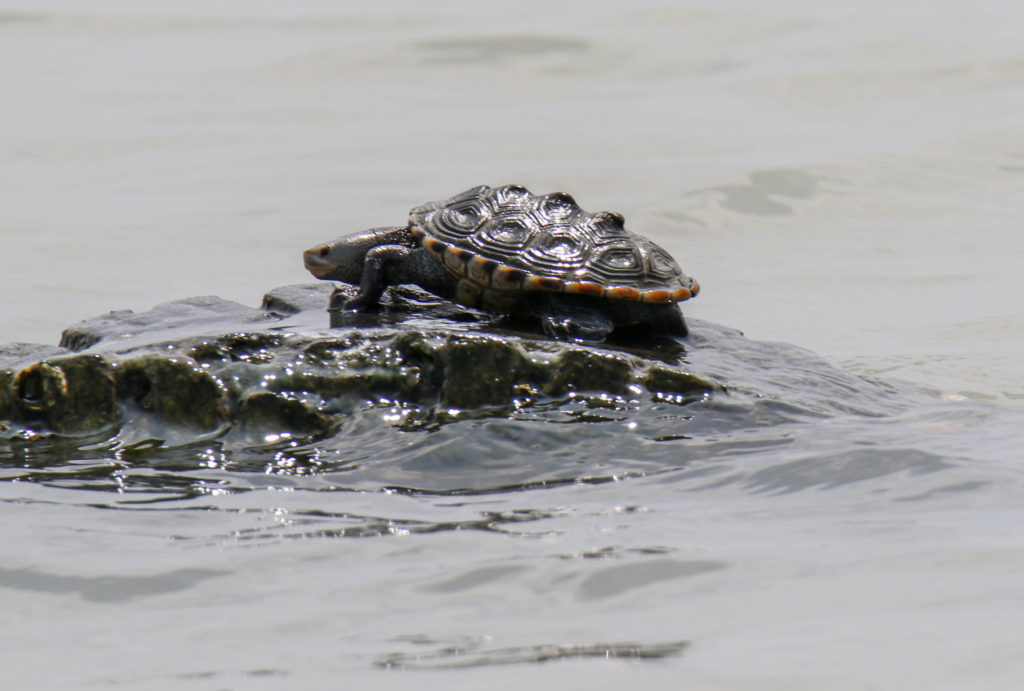 This one must be a male because females are much larger. Next up was YM & JH. Their nest was due to hatch and when we checked it had! One of the chicks was still wet from having just hatched and the adults hadn’t had time to remove the egg shell. There are three chicks in this photo. Can you find them? 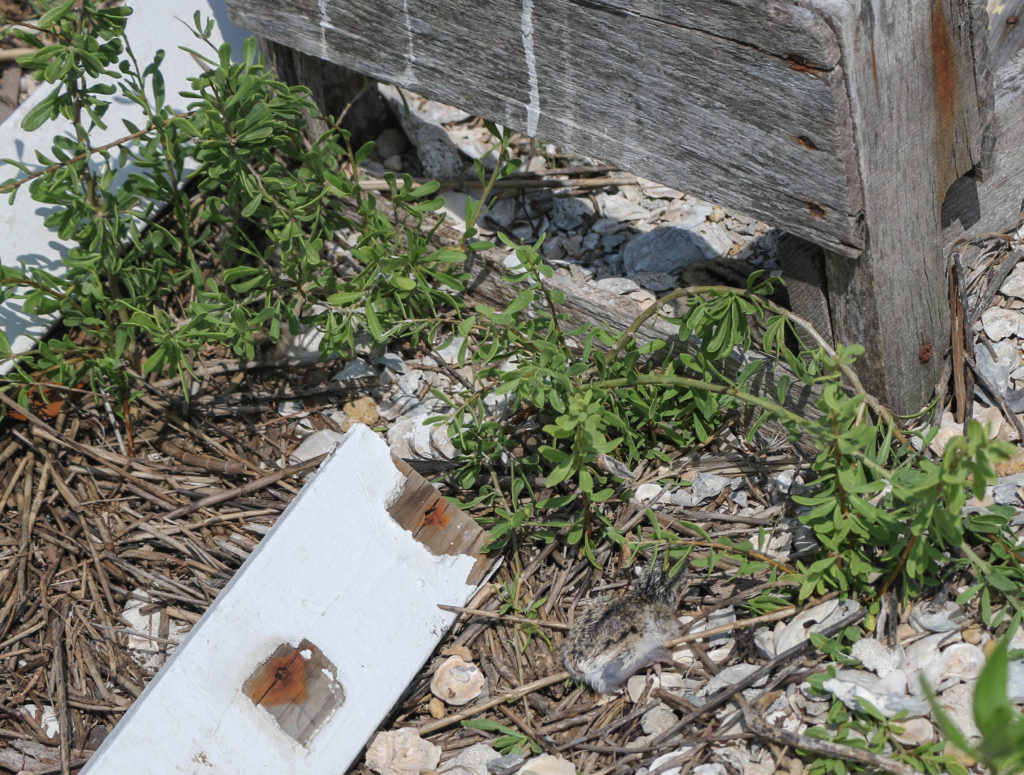 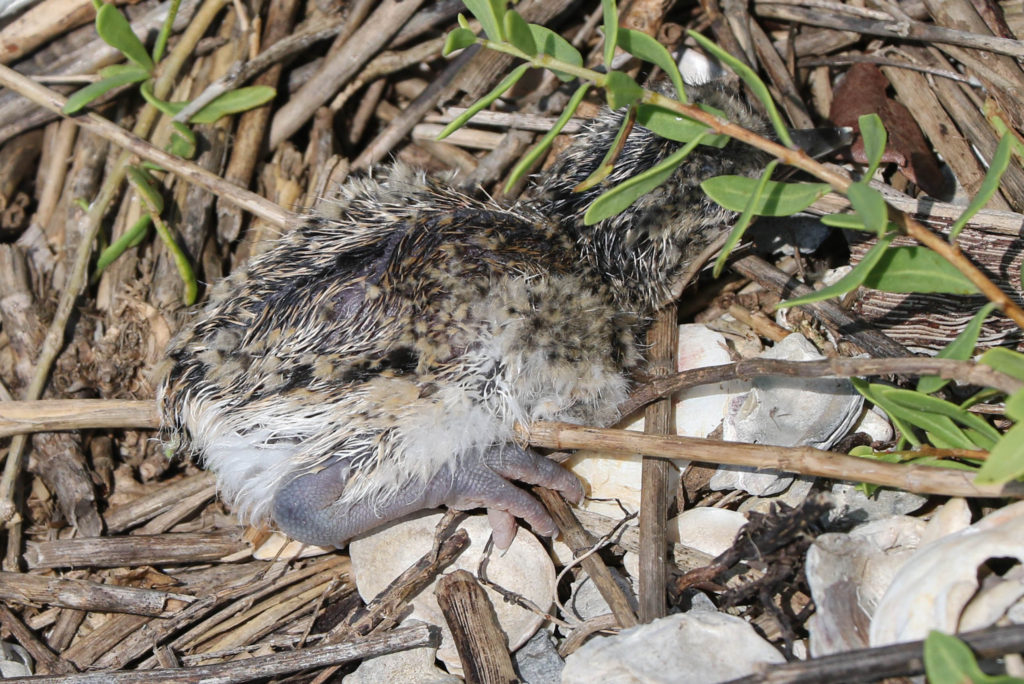 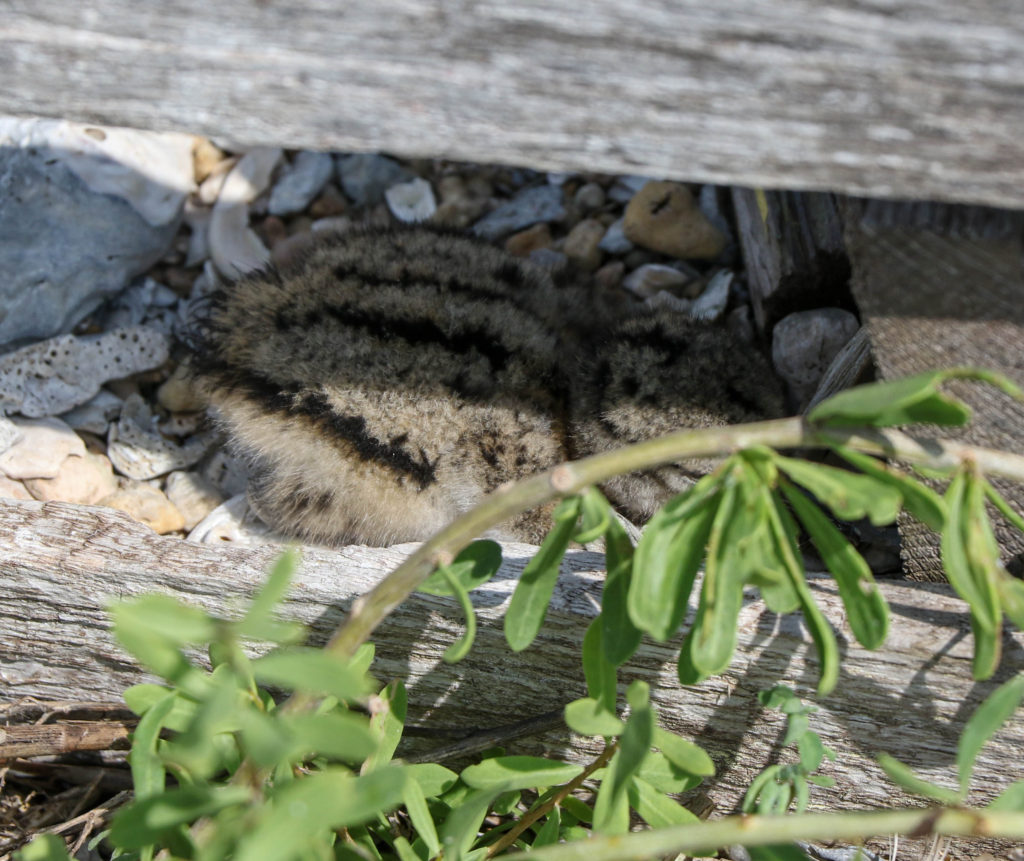 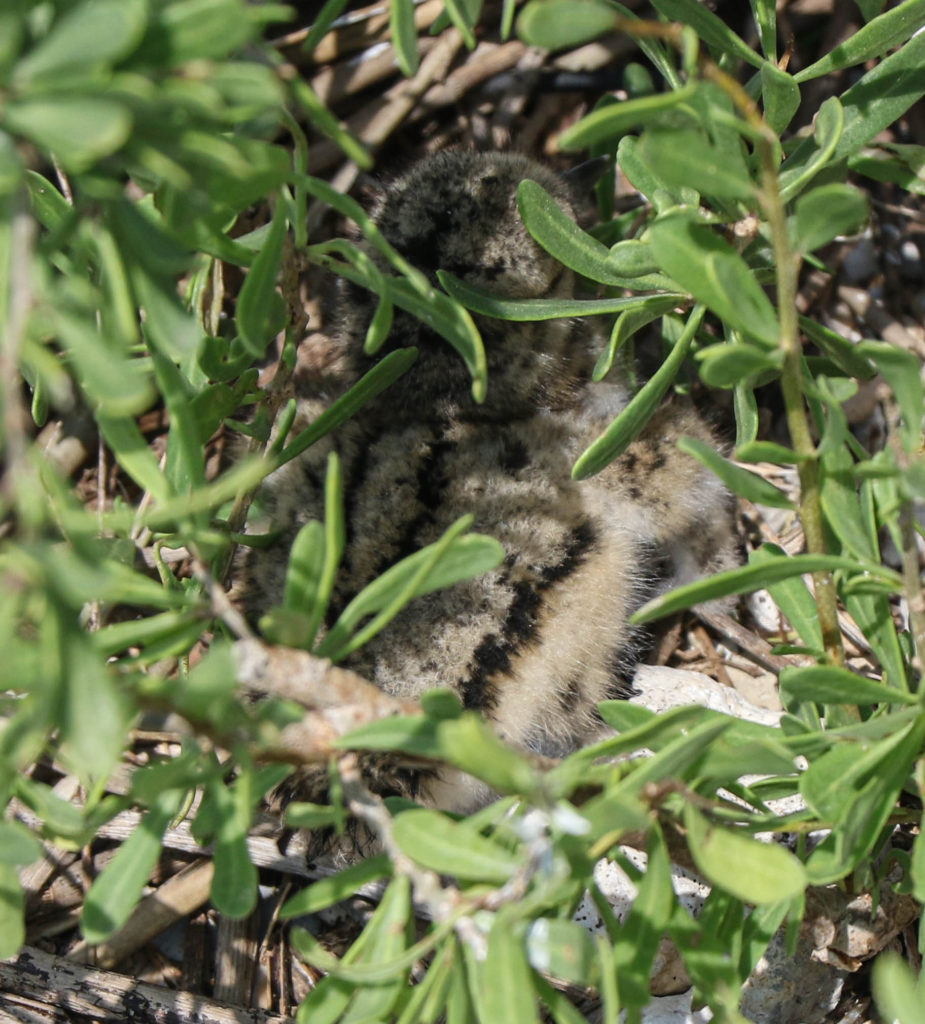 That is great news! I hope they can keep them safe from the pelicans and the gulls. We went to look for J6 & UF but we couldn’t find them anywhere. It was getting late and I didn’t want to spend too much time looking. We’ll give it a further search next week but I’m hoping that means they were hiding somewhere with chicks!

I was elated to see that JJ & P4 still had their two chicks. 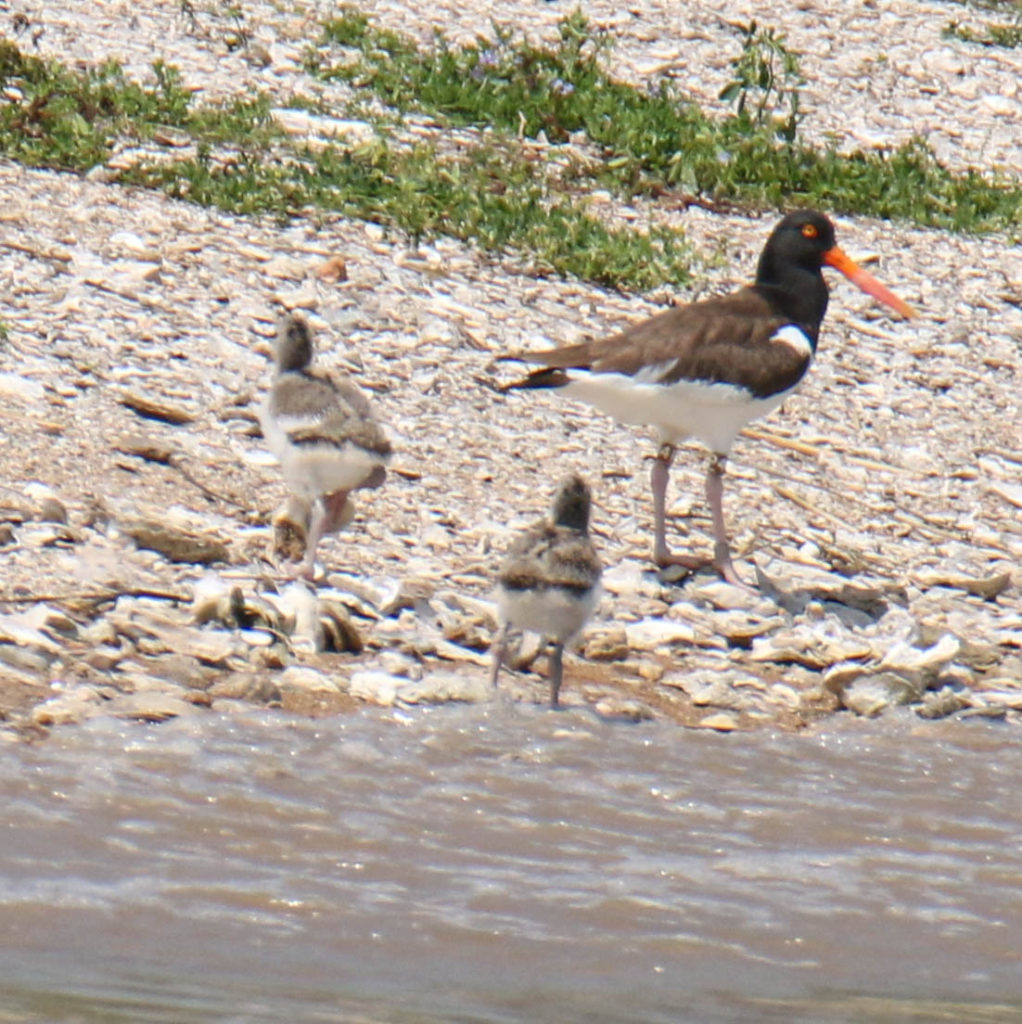 Very exciting! FR & unbanded weren’t giving anything away but I’m pretty sure from their behavior that their chicks are going strong. We found CA & Y2’s chick hiding under some roots.

And the Caspian Terns have returned to their island. 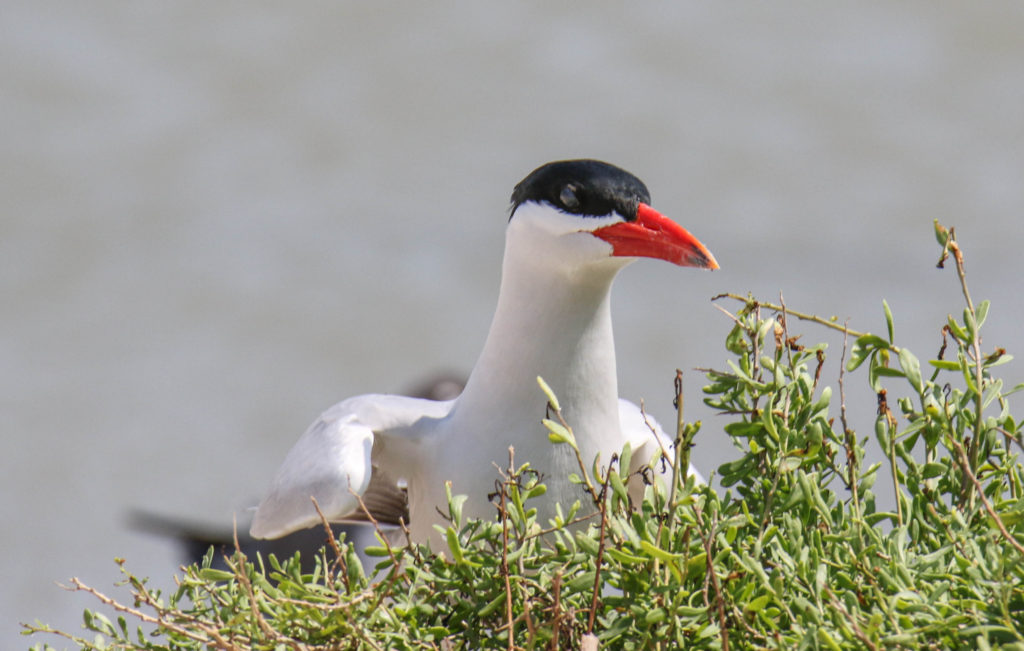 I like terns in general and Caspian Terns are just so beautiful! Soon that island will be covered with their eggs so its good that CA & Y2 hatched their chick before that hubbub started.

W5 was incubating his nest like a good dad while JC lounged on the shoreline so once again we didn’t bother them. When we arrived at the last small island in Jones Bay, we found a pair that I assumed was E4A & unbanded since they had had a nest that failed there. But I was oh so wrong! It was instead X4 & U9W. What? Where did they come from? And where is E4A? You are not allowed to just disappear after I spend the time catching you and banding you! So rude! At least this new pair is banded already. X4 is a chick from 2011 and U9W is LT & JA’s chick from 2020. It’s not old enough to breed yet so I doubt they’ll lay a nest. Perhaps they were just checking out the area.

The wind had picked up quite a bit and we were done so we headed back to the boat ramp.