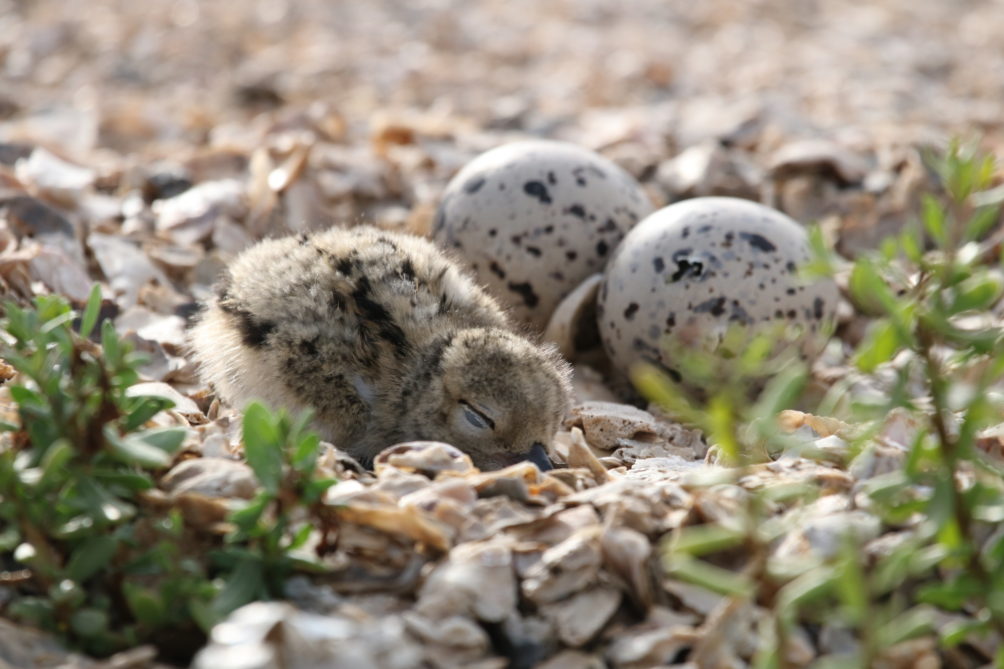 This is the spring of wind! It was too windy to check the entirety of East Matagorda Bay so Taylor, Kenlynn, and I took the boat to the ramp in Matagorda and went out to check on the nests at Old Gulf Cut since its pretty protected there.

A7A & unbanded were still incubating but there were some very cute chick peeping noises coming from one of the eggs so it’s about to hatch! The other egg had a small crushed spot on it so I don’t think it is viable. There was even more excitement at 25 & unbanded’s nest. I noticed that the adult looked like it was in a brooding posture and sure enough when we checked we found this! 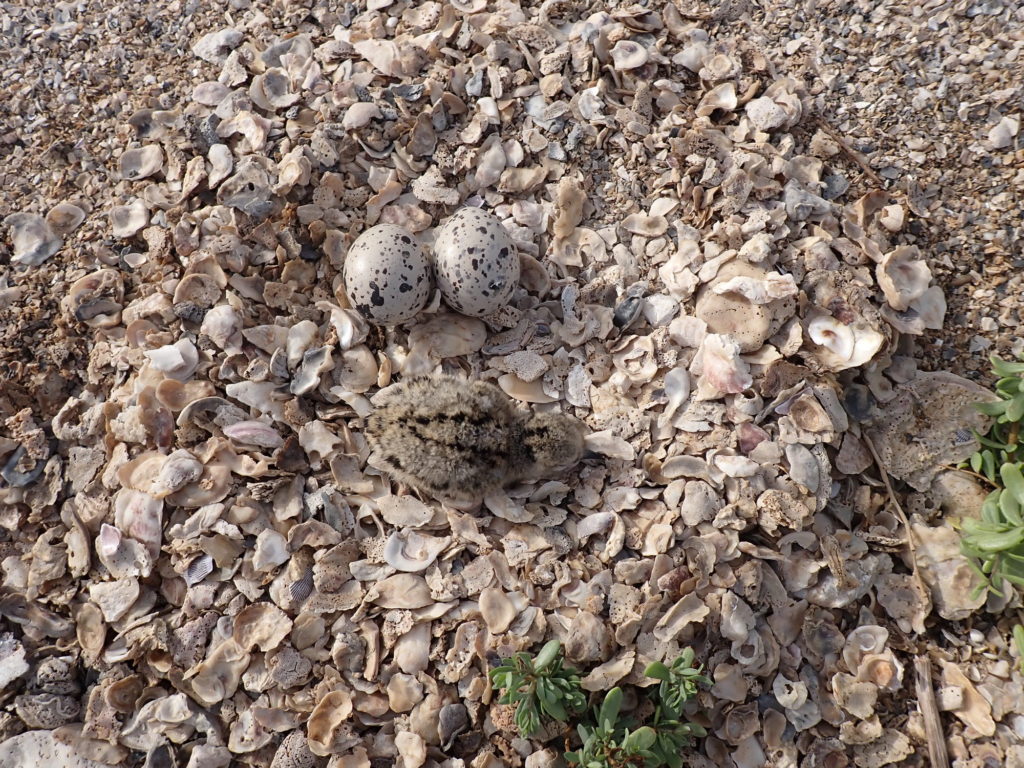 The two remaining eggs had chick sounds coming from them so they will be hatched by now. So awesome! I sure hope we don’t get a tide high enough to go over those islands for the next 35 days. That’s what happened last year and both pairs lost their chicks. Keep your fingers crossed. I have been talking to Audubon Texas about restoring these islands so it will happen one of these days but those projects take forever to get going so it won’t be these particular oystercatchers that benefit from the restoration.

It was equally as windy on Thursday but we can managed the wind a little better in West Galveston Bay because we can hide behind the islands to get out of the wind. No dice going to Swan Lake though. Alan and I braved it and although it was quite bumpy, we were able to check on all the birds in the east end of the bay.

W5 & JC weren’t incubating their nest so I figured it had hatched. We found them a little way from where the nest had been with one small chick. There are a lot of gulls there so I sure hope they can keep it safe. FR & unbanded weren’t giving anything away but I’m sure they still have chicks because of their behavior. Next week we will have to find the chicks to band them which I’m sure will get FR going. CA & Y2 were both on their island and they started calling us names when we approached. I looked around and found this: 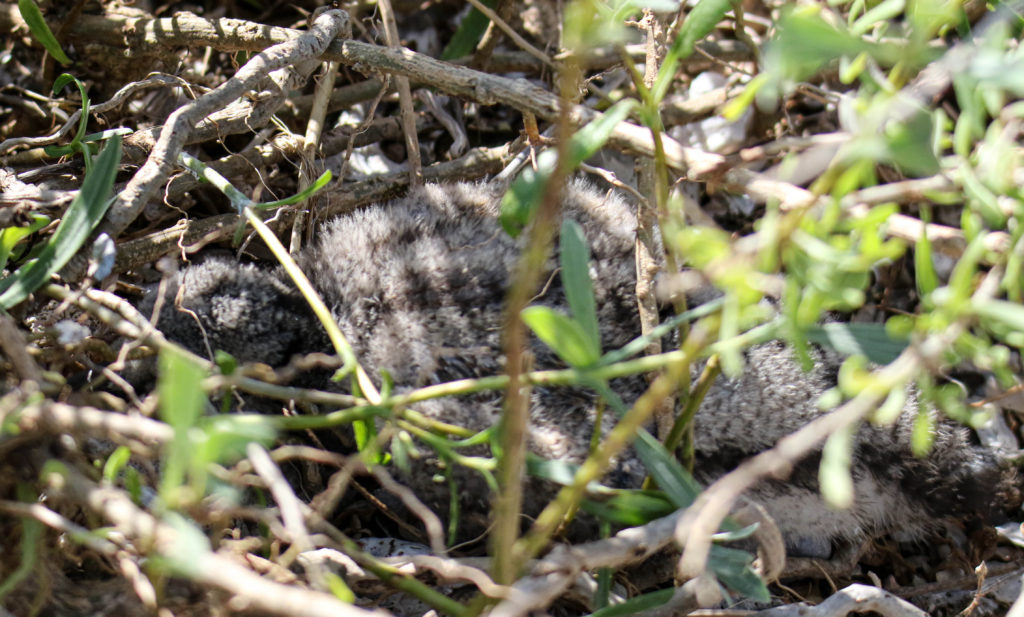 So much bigger than last week! It was time to head out into the GIWW and I was dreading it because I could see white caps out there but it wasn’t too bad. We could see that JJ & P4 had moved back to the other end of their beach so we deferred checking on them and went to check on YM & JH while we were in the area. They were both in the spartina and went nuts when we approached, a sure sign they still have chicks. We left them alone and moved on.

Then we went back across the GIWW and checked J6 & UF’s tiny island where they used to nest before it eroded to a reef. I was hoping they weren’t there but they were so their nest on Marker 52 must have failed after all. If they had chicks, one of them would have been tending them. Dang. They laid that nest a month too late!

Then we finally got back to JJ & P4. One of them was laying down up against the vegetation and for a minute I feared they’d lost their chicks and laid a new nest. But that was not the case at all. When the adult stood up, a big healthy chick stood up with it! Just one though so the second one must not have made it. The other adult flew in from the reef to provide reinforcements just in case we decided to go on the island but we left them alone since we knew their status. 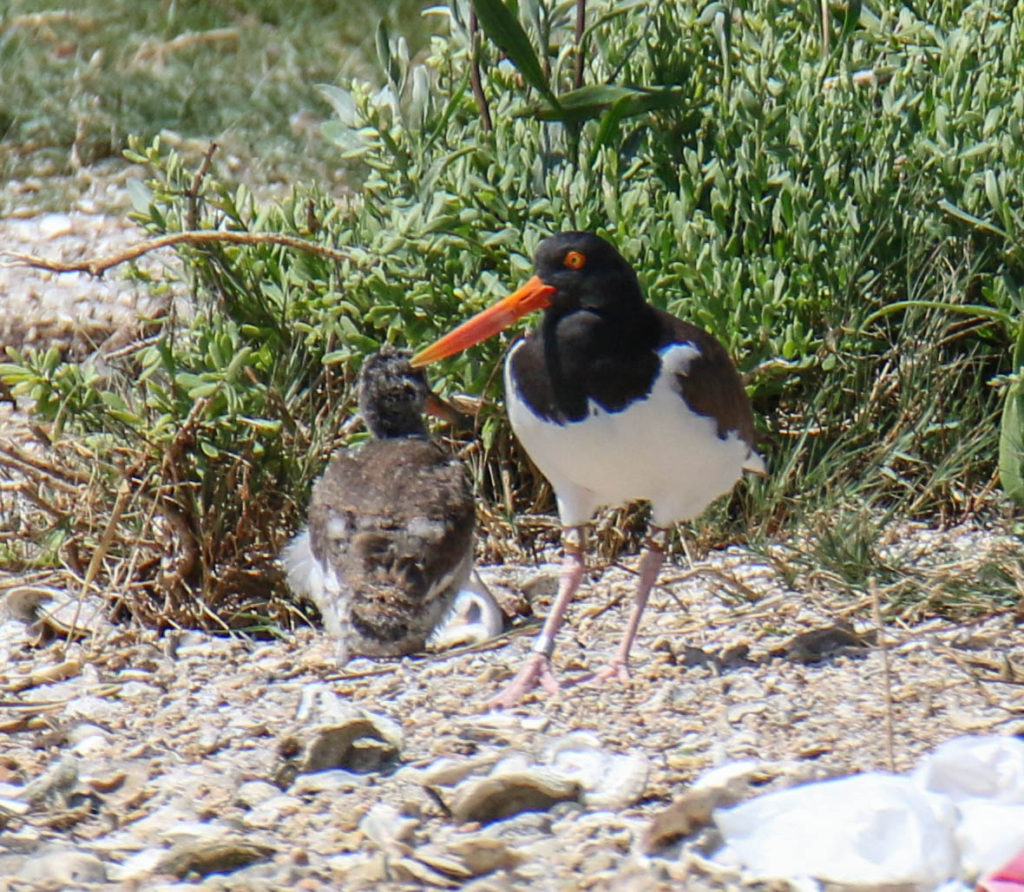 We headed to the backside of North Deer and saw C1A on the nest. It was time for it to hatch though so I moved the boat in for a closer look. When C1A stood up, we saw a small chick underneath her! Yay! It hatched. 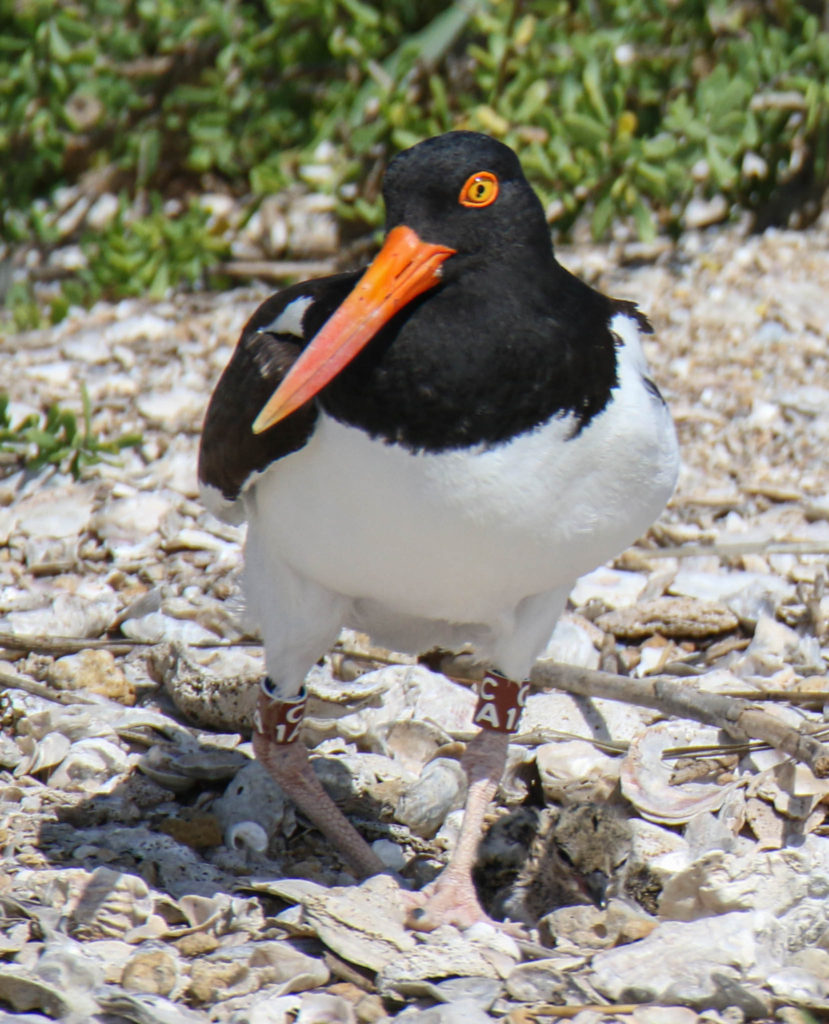 That’s good news! Lots of pelicans and Great Blue Herons there. Keep that baby safe! E8A & unbanded were incubating their nest so no need to bother them. We moved on to South Deer. I figured F1A & E2A’s chick would be fledged but when we approached it just stood on the island. Probably not a good idea for an inexperienced flyer to take off in 18 mph winds so it’s just as well! 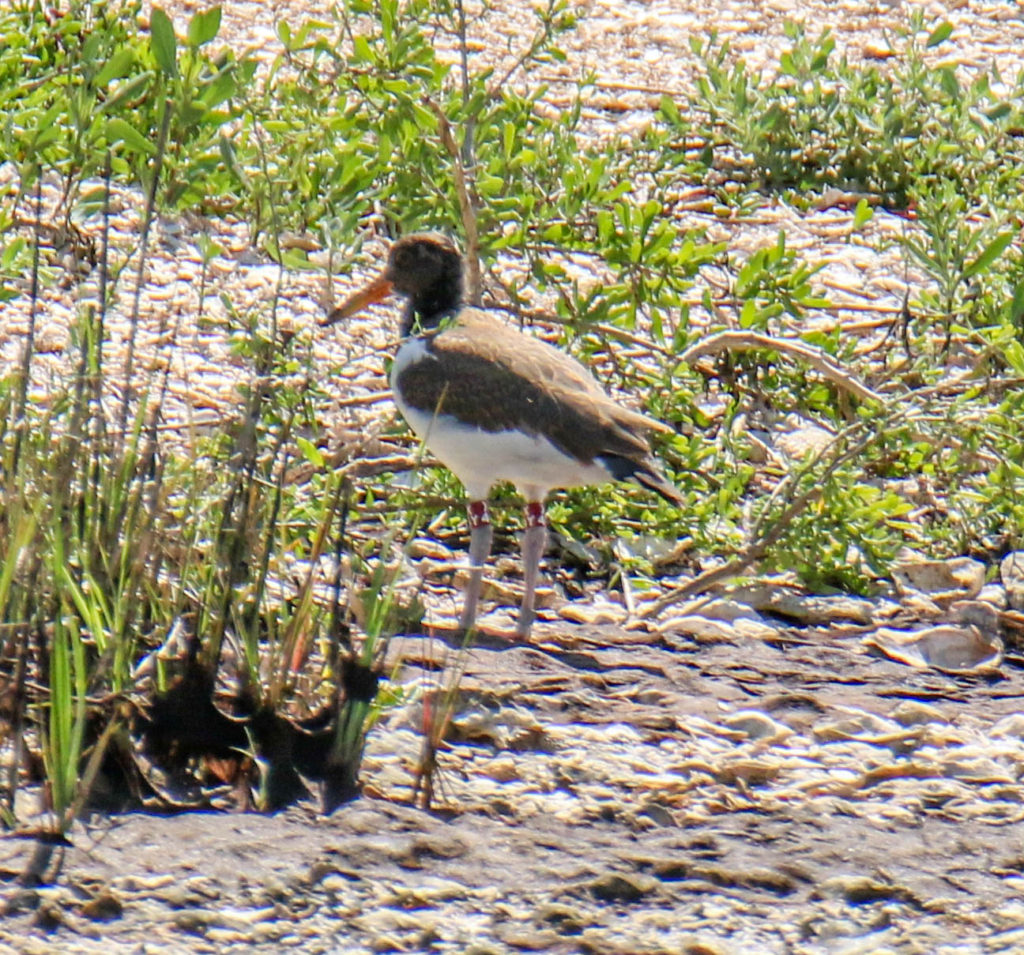 We made it almost all the way around to Y7 & unbanded’s territory when an oystercatcher flew out from the shore and circled the boat and then flew back to shore. Hum. Who’s that? Then I noticed another adult up in the vegetation. It was way too windy to go check for bands but I figured Y7 & unbanded had moved down to that area with their chick because there’s fewer gulls. Indeed, we saw no oystercatchers in their territory. Smart move!

A1A & unbanded are acting very cagey this year. I’m pretty sure they have a chick but they aren’t letting us see where they are hiding it. Every time we approach they fly out over the water before we can see where they are and then they land back where the nest was. Sneaky, sneaky!  We will figure out this puzzle in a couple of weeks when its time to band the chick.

It was time for A4A & unbanded’s nest to hatch and we did not see one of them incubating so we went to investigate. One of them was on the oyster balls out in the water and the other one was on a part of the island with sparse vegetation. In that vegetation we found two small chicks hiding! 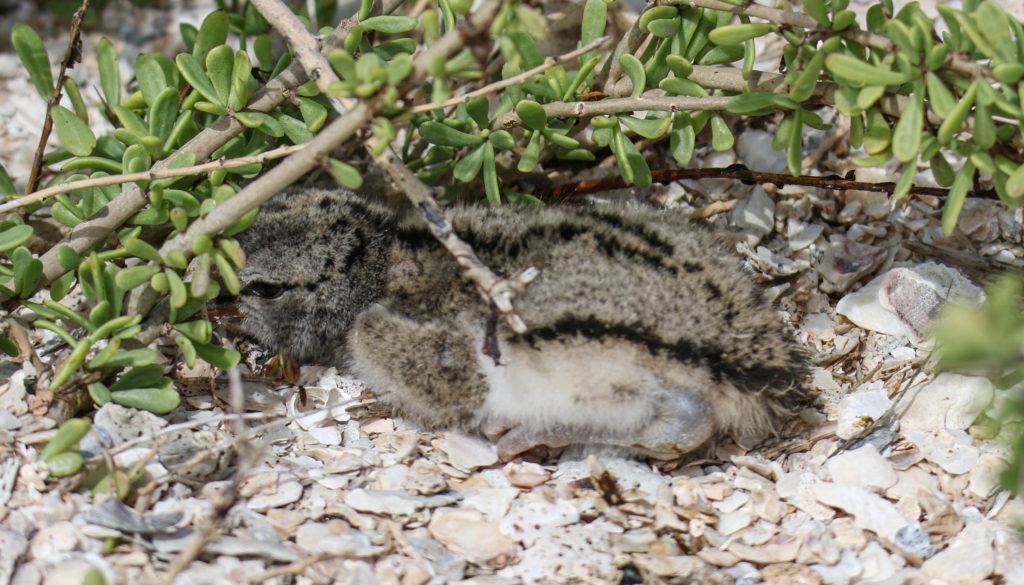 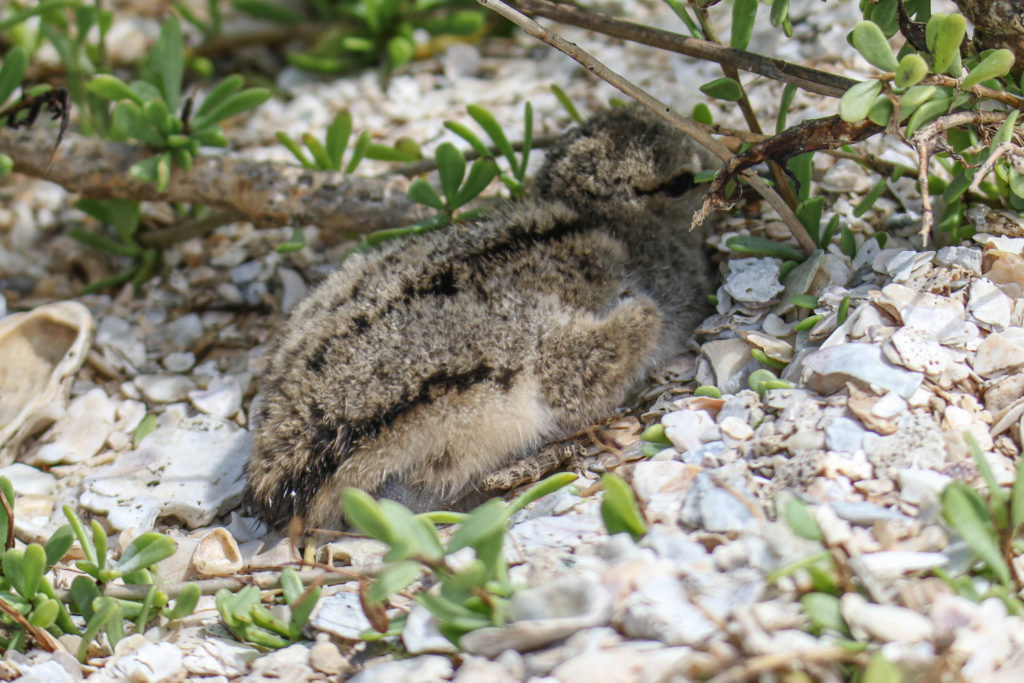 We found a few youngsters on the docks but the majority of that flock was somewhere else. The tide was too high for them to be on the reefs. I had high hopes for 16 & F9A’s nest but when we approached, they were not incubating and we found them a little way down the shore without any chicks. Poor 16. He tries so hard but he just has no good place to nest. I am sure a predator either got the eggs or the small chicks. I wonder how long F9A will put up this before she leaves him?

We moved on to Jigsaw and found that the new pair X2 & W2Y had laid a nest with two eggs. 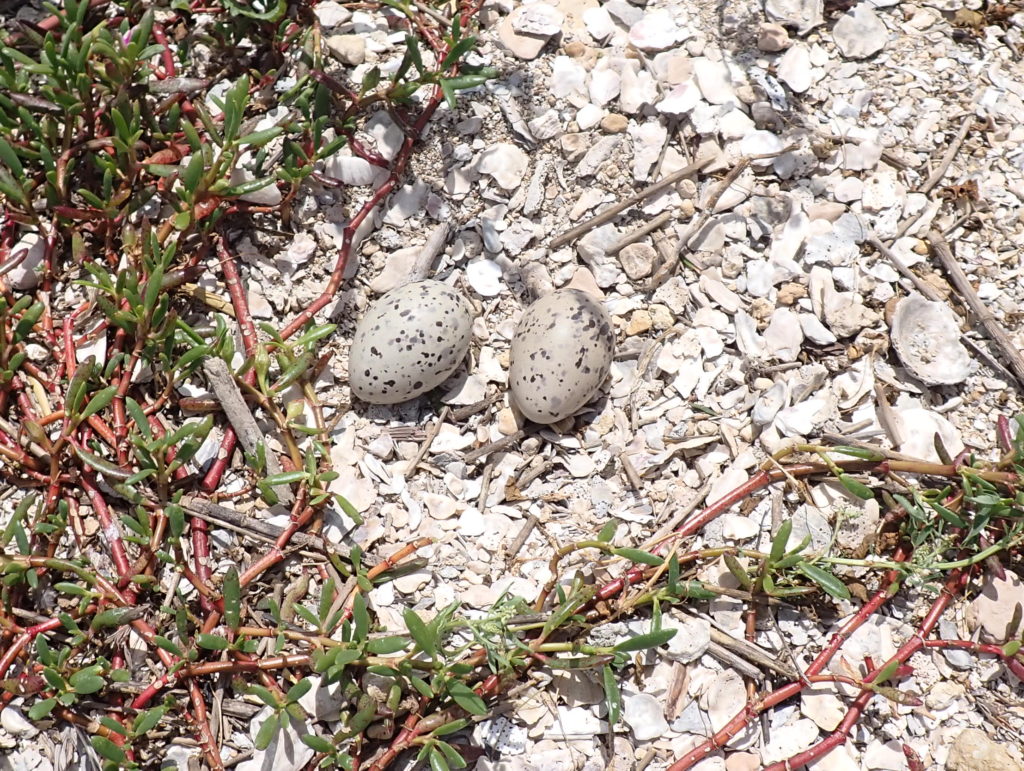 YE & unbanded were standing along the shoreline and paid no attention to us when I went to check the new nest so the gulls must have gotten their chick. Another bummer. The gulls also appear to have gotten LH & JX’s chicks. There is a Royal and Caspian Tern colony developing there now though and that keeps the gulls away. Maybe they will lay another nest.

Since we weren’t going to Swan Lake, the last island of the day was Struve Luci. There was a lot to do there because I have to count the nesting terns and skimmers for another project. The skimmers haven’t laid eggs yet but the terns are incubating nests all over the place. I took videos of the all of them so I could count them later but we had to circle the island several times checking for Gull-billed versus Forster’s Terns because you can’t tell them apart very well in the videos.

Alan kept an eye on the oystercatchers while I was doing all that videoing and counting. L9 & unbanded were incubating their new nest. 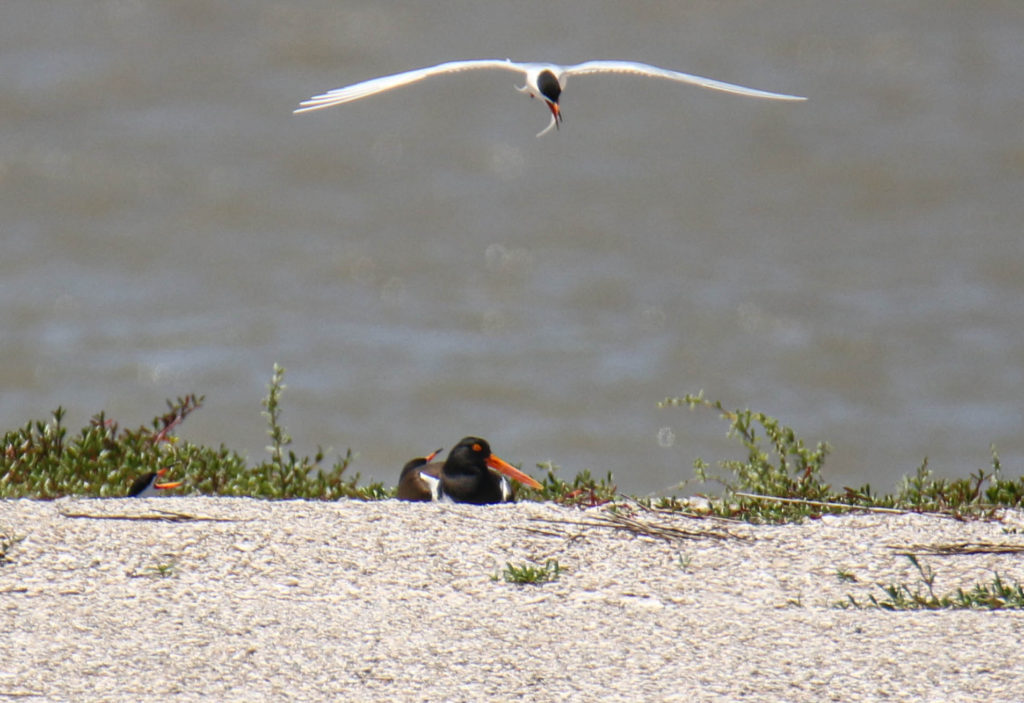 We saw LT & JA and their chick X0U on a dock so clearly X0U is comfortable with flying now. 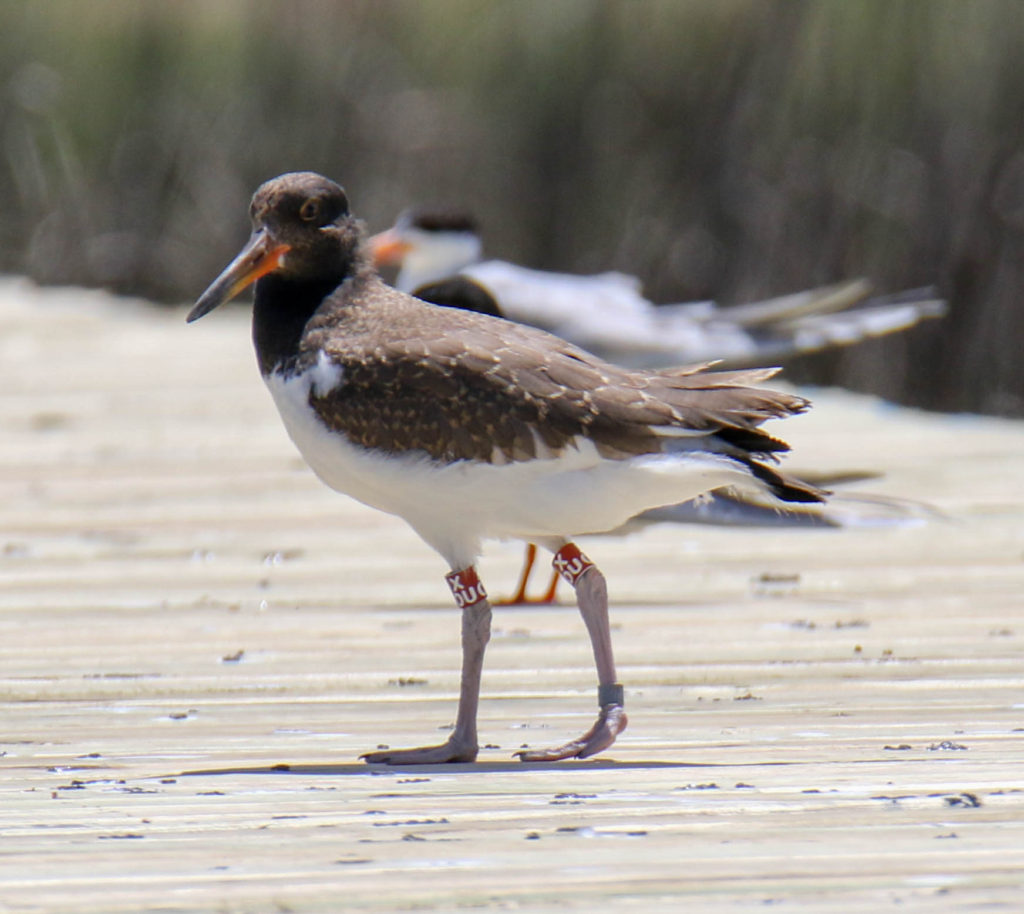 We also saw both of 12 & unbanded’s chicks and one of them flew when it saw us coming! Yay! Another chick fledged. The second one made a short hopping flight down the island so it doesn’t have far to go. 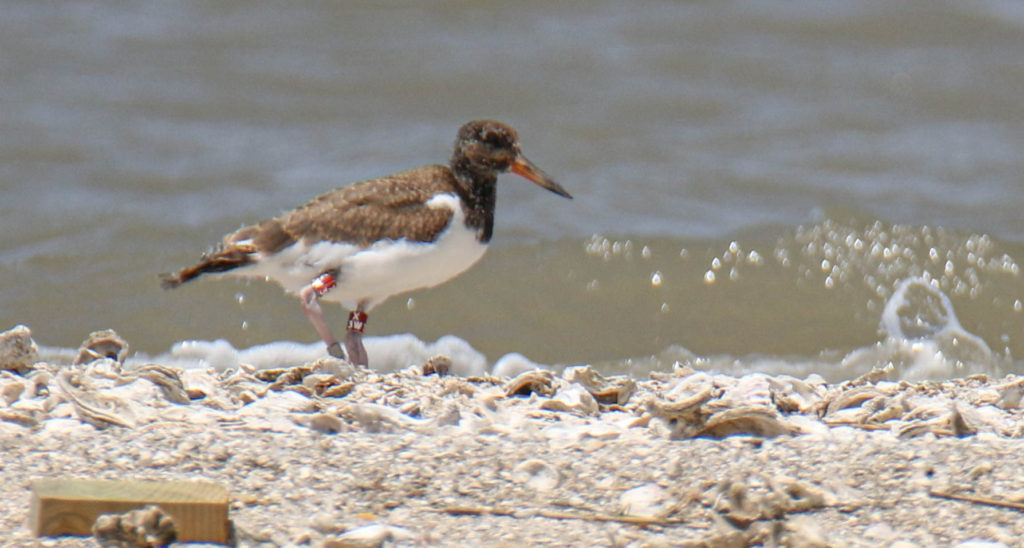 HM & X7 still haven’t laid a nest and it seems like they just aren’t going to do so. It’s a shame their part of the island is so eroded now. This island will also get restored at some point but as I said, it takes a long time to get the money and all the permits. It will be a happy day when it happens though!

Once we were done with everything we headed across the bay back to the boat ramp. I was very glad to get out of the wind. There seems to be no end to it this year.