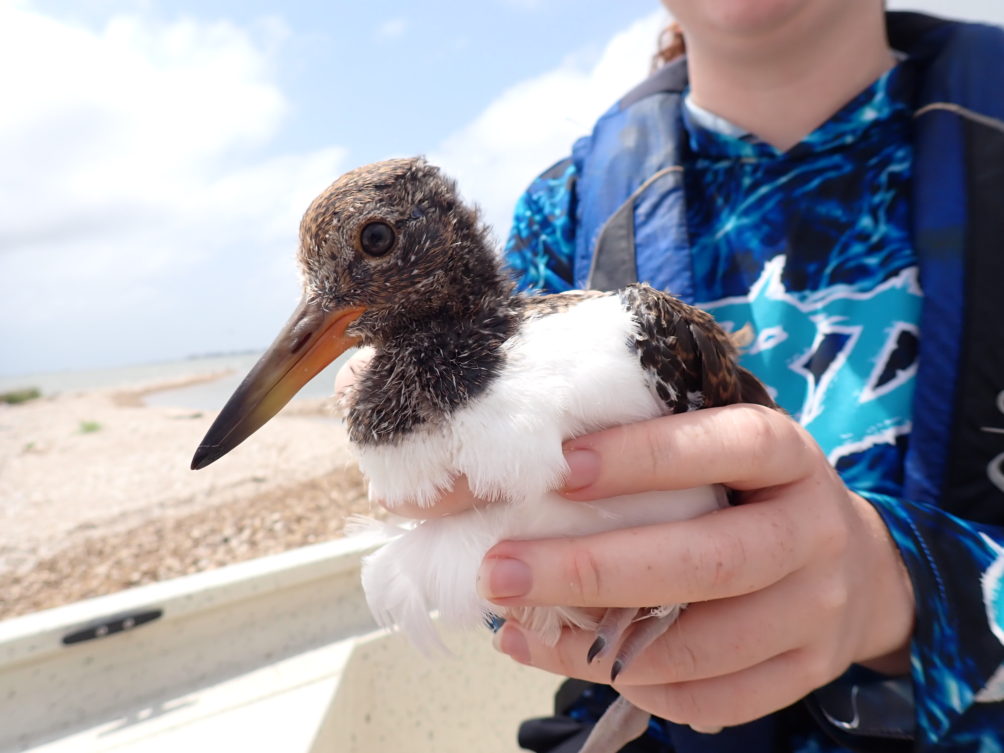 It was too windy to check the Brazoria Bays this week so we had to skip it. We’ll find out what’s happening there in a couple of weeks if the wind ever dies down. It was windy again on Thursday and Alan was having a few back issues and didn’t feel he should be bouncing around on a boat all day, so I recruited GCBO’s Education Manager, Celeste Silling, and her intern, Adam Trujillo go with me. We started a little earlier than normal because Justin and Terry from the Coastal Bend Bays and Estuaries Program were coming to install a camera at the Black Skimmer colony so we can track human disturbance. I wanted to get as much done as I could before they arrived at 10:00.

My weather app said the wind was only 14 mph when we started so we headed up to Swan Lake first thing. 20 & unbanded were incubating away so we left them to it. LR & unbanded, however, were not present and their eggs were gone. I suspect a coyote got their eggs because their “island” is now connected to the mainland and when I was putting out cameras on nests, eons ago, I caught a lot of coyotes on them.

It was time to band K7 & unbanded’s chicks and they are very good chick hiders so I went down to the far end of Swan Lake by X3 & unbanded before entering the lake proper. Usually we go in at the other end. 39 & unbanded had lost their nest. I don’t know what happens to their nests but they never seem to make it past the egg stage. X3 & unbanded were a different story though. They were acting like they had chicks so we gave a quick look around and found three chicks hiding in the vegetation! Woohoo! 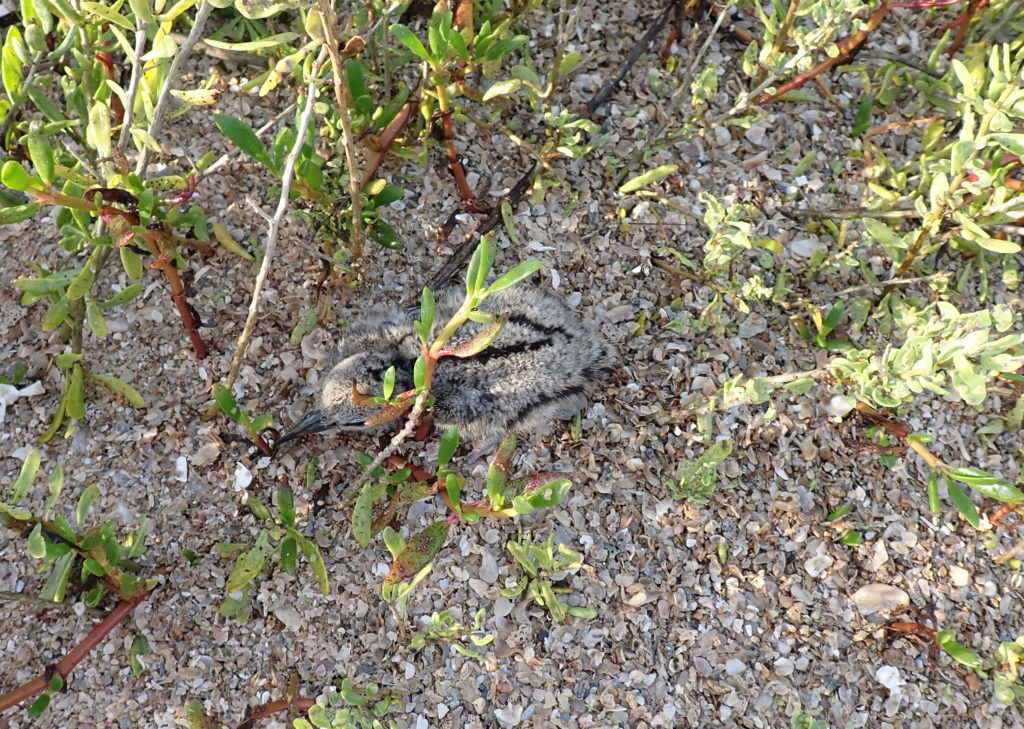 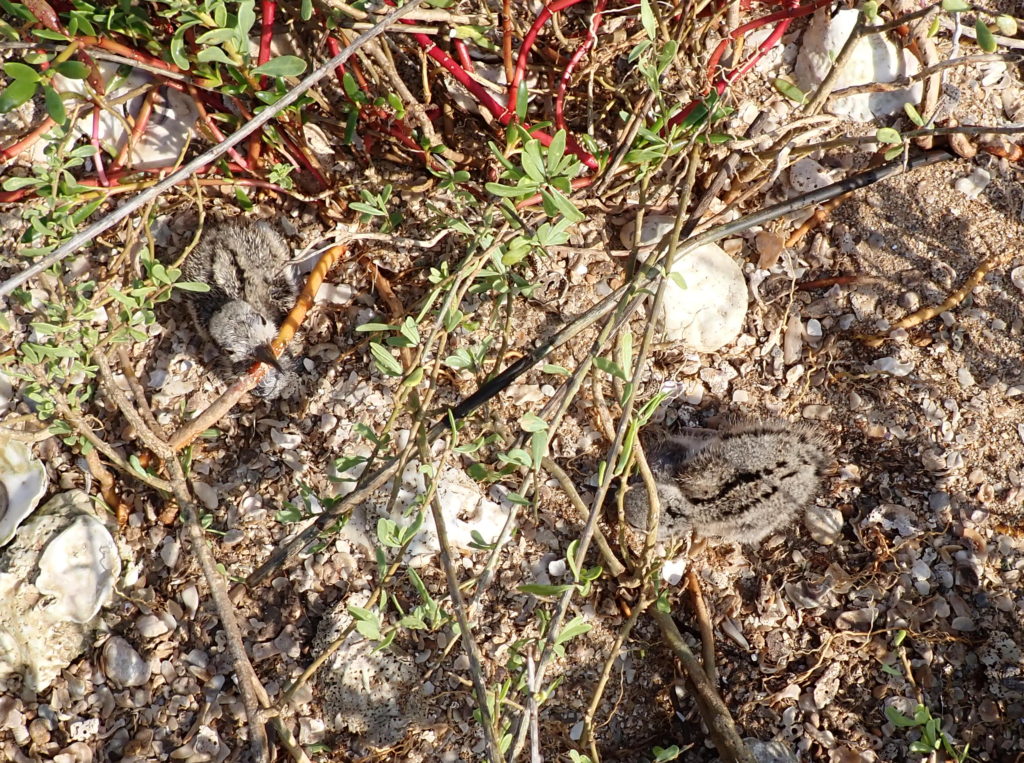 From 39 & unbanded’s territory I was able to look over at K7 & unbanded’s territory and I saw them standing with one chick in a spot where we wouldn’t have been able to see them if we’d entered the lake they way we normally do. Score one for Sue! After we were done with X3 & unbanded, we raced over to where K7 & unbanded were and Celeste gave a great chase after the chick and scooped it up out of the water just as it dove in. Awesome catch! We banded it Y7Y. 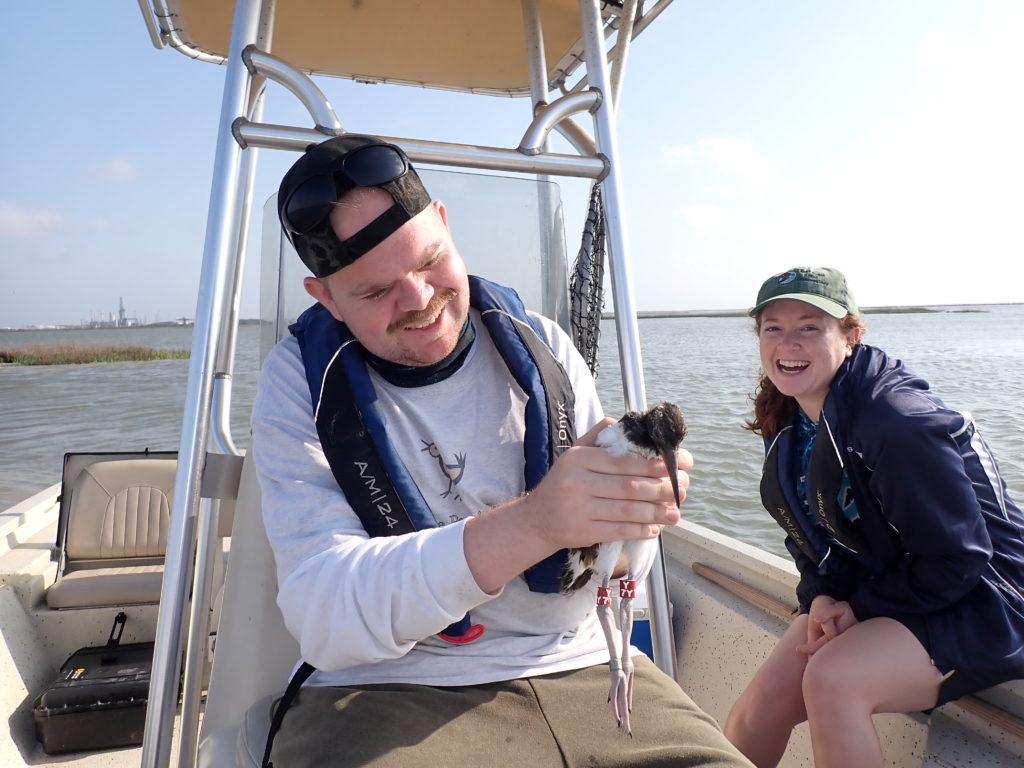 K7 & unbanded were most happy when we let it go and they were reunited down the island a bit. Ha K7! For once I outsmarted you. We headed back across the bay and it was a bit of rough ride because we were heading right into the wind. It had definitely increased from 14 mph. Just as we started getting close, the railroad bridge went down! How does that thing know when its rough out there and I just want to get back to West Galveston Bay? Fortunately, I’ve discovered we can go under it even when the tide is a bit high like it was today so we cruised under and headed for Jigsaw.

Sadly, all the nests there have failed even the new one we found last week. There are just too many gulls there. Even more sad was the fact that YE’s unbanded mate was limping. I took a couple photos and could see she has something wrapped around her foot but it doesn’t look like fishing line. When we got close she flew so there was no catching her. I just hate when this happens! Next week we’ll bring the net gun and see if we can catch her. 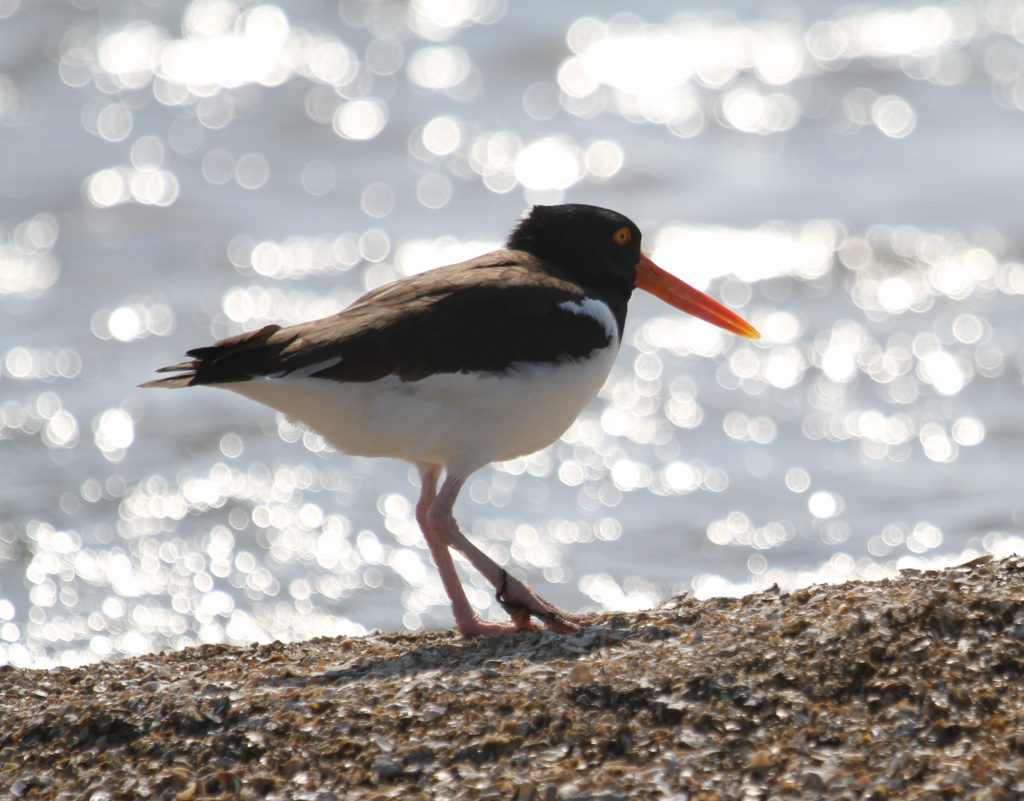 Justin called me and said they were at the dock waiting for us so we headed over and picked them up at Galveston Bait and Tackle. It’s a short ride to the Black Skimmer colony from there so we were working on putting up the camera in no time. This involved digging a hole under the water and sinking a 12-foot 4×4 into it. Not easy! Here’s Celeste digging away. 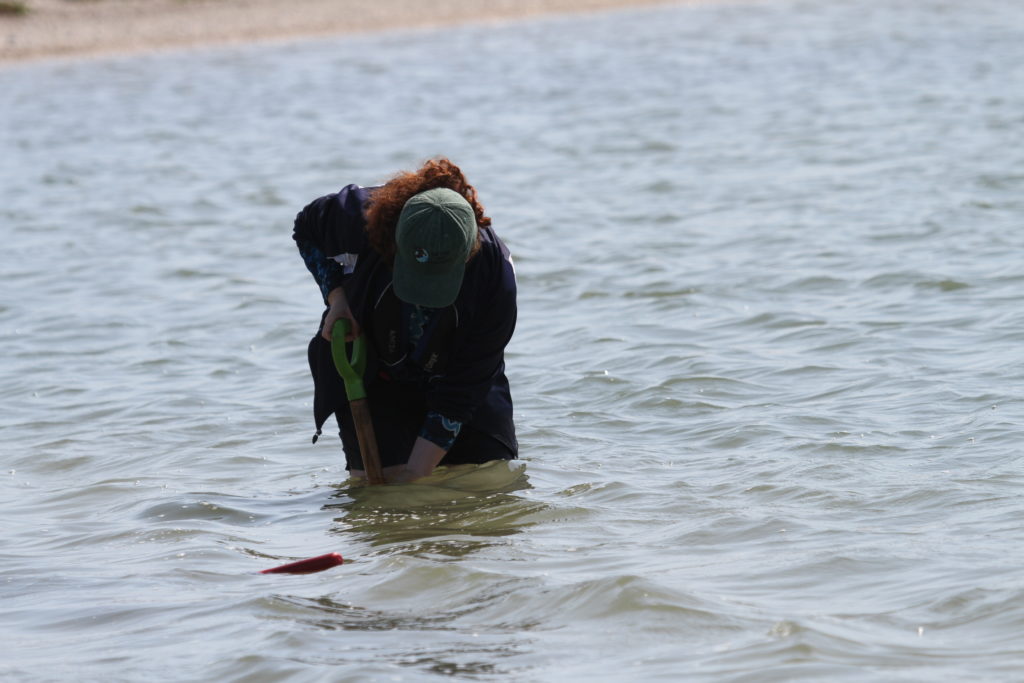 Eventually Justin was able to get a hole deep enough and we sunk the post and then banged it in a little more using some human ingenuity. We mounted the cameras and viola! Now we will know how much disturbance these skimmers are having to deal with. 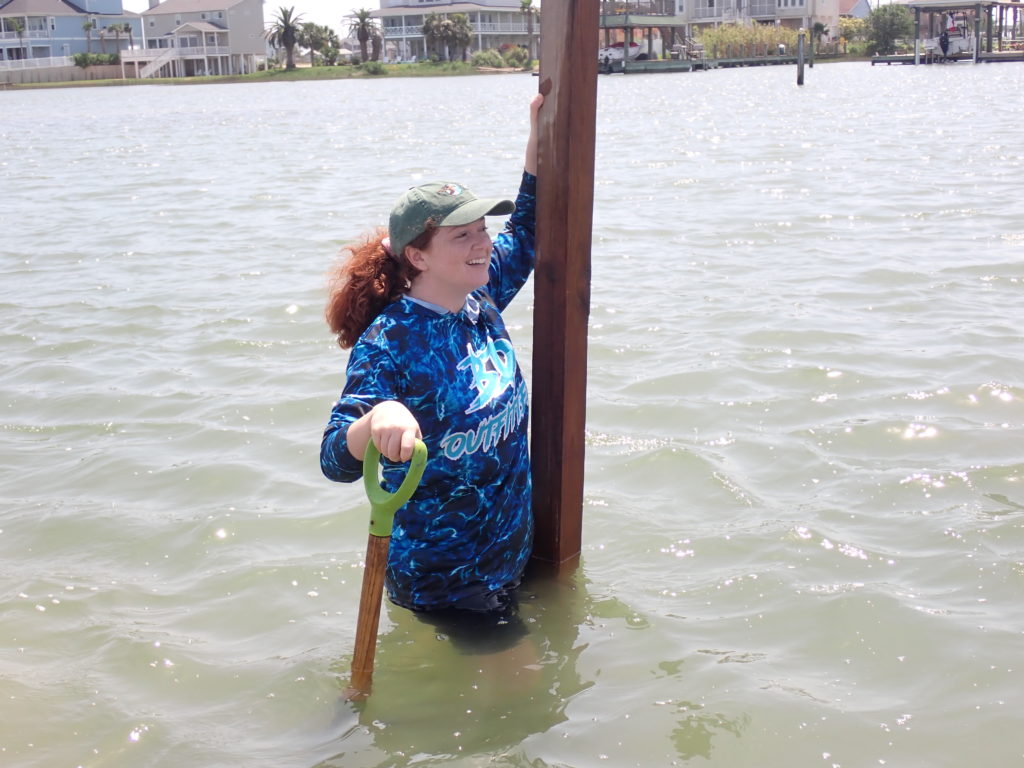 It took a couple hours of our day getting this done so I was eager to get on with checking the rest of the pairs. Once we brought Justin and Terry back to the boat ramp we headed back to count the skimmer colony and check on the oystercatchers there. 12 & unbanded and their chicks were all hanging out together. 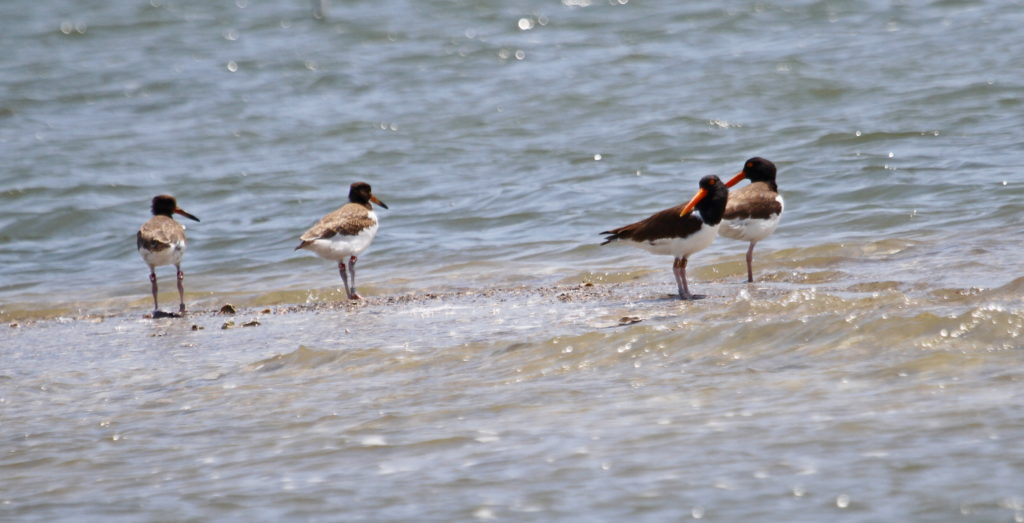 LT & JA and their chick were on a dock. HM & X7 were also on a dock so I don’t think they are going to lay a nest this year. They just aren’t showing any interest. L9 & unbanded were incubating their nest that is on the side of the skimmer congregation so that left E5A & unbanded. Kevin Somers, my spy on the ground, had told me he’d seen them with a chick so we made a quick check of the area and sure enough we found two chicks hiding! I thought that nest had failed so big yay! Way to go E5A & unbanded. 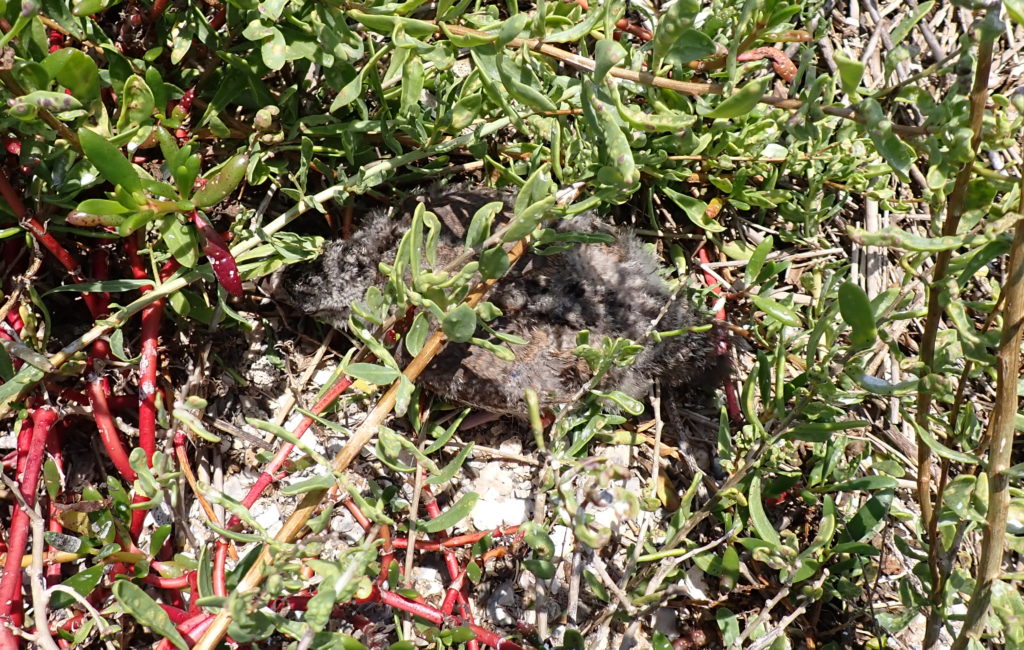 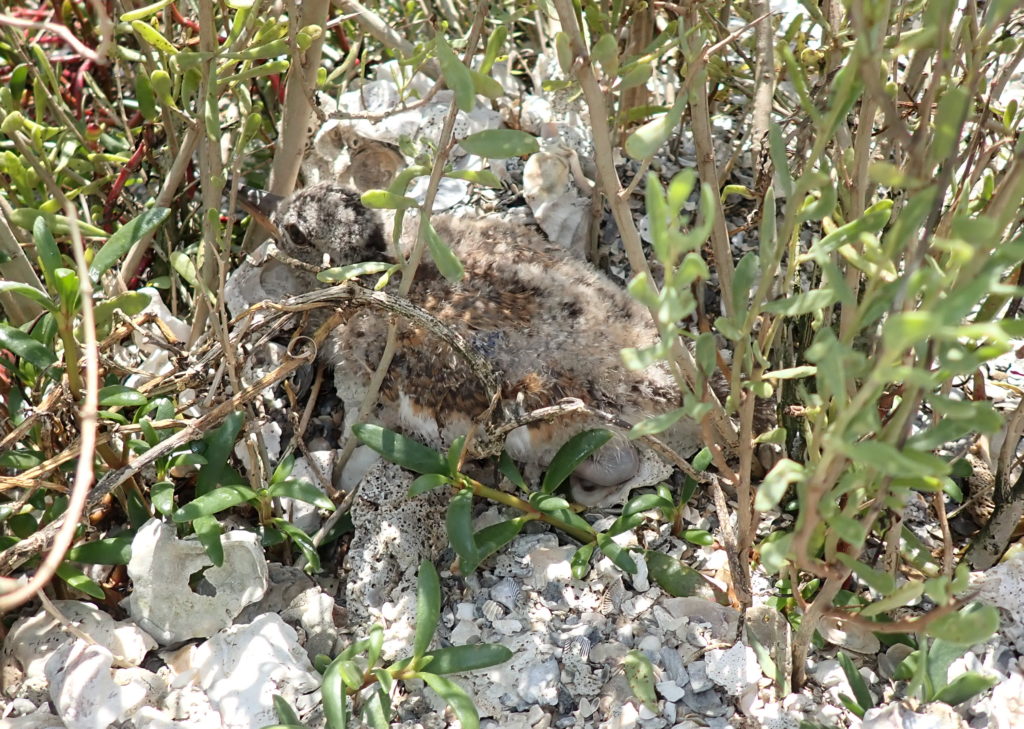 Since we’d already checked on Jigsaw, we headed along the Galveston shoreline. Both YK & unbanded and 16 & F9A were loafing along the shoreline so no further action there. I decided to ignore the youngsters on the docks since Alan wasn’t there to get photos of the bands and checking the rest of the nesting birds was more important.

A4A & unbanded were in the vegetation in the same place one of them had been last week with chicks so I assumed they still had chicks and we moved on. When we got to South Deer, A1A & unbanded flew out to greet us again giving us no chance to figure out where they are hiding their chicks. Dang those birds! I’ll have to figure out a sneak approach for them next week because we need to band their chicks. That spot is tough to approach because there are a lot of reefs but I’ll have to figure it out somehow.

Y7 & unbanded were in the same spot as last week in the vegetation so I assumed they still had their chick too. It will be time to band that one next week too. The tide was covering over F1A & E2A’s reef so they were on the island with their chick just hanging out. That one’s fledged now so nothing left to do there.

On North Deer, E8A & unbanded didn’t seem to be incubating but they still had one egg so I guess they just heard us coming and got off the nest. I think they are still not happy with us for catching E8A on the nest a couple weeks ago! C1A & unbanded were in the vegetation acting like they still had a chick so we moved on to YM & JH. We managed to spot two chicks with them! I wasn’t able to get any photos because the boat was bouncing around and they were moving too much but there was no doubt there were two chicks. Very happy about that!

JJ & P4 were sleeping near the water’s edge with their chick snuggled up to one of them. That one will get banded next week too! It’s going to be a big chick banding week next time.

There was an unexpected pair a little farther down the island and my photos revealed that it was E4A & unbanded who had a nest that overwashed on small island in Jones Bay. Maybe they will try to nest again in this spot. It’s certainly a better bet than where they were before but it does have a lot of gulls. 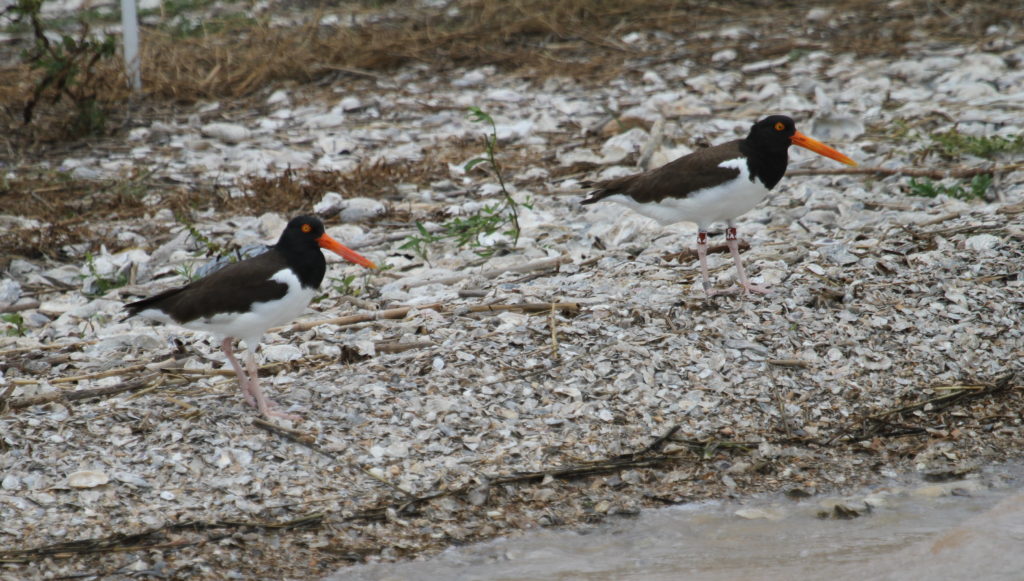 We did not see W5 & JC on the GIWW side of Marker 52 so I figured they were on the other side and we’d check them when we got over there.

It was time to band FR & unbanded’s chicks but we hadn’t seen them since they were just hatched so we didn’t know how many there were. As we approached we saw only one chick with them. Boo! What happened to the other one? This time when Celeste and Adam got off the boat to make chase, the chick started running but then it disappeared. When that happens it usually means the chick layed down somewhere and sure enough Celeste found it laying next to the vegetation. We banded that one Y4Y. 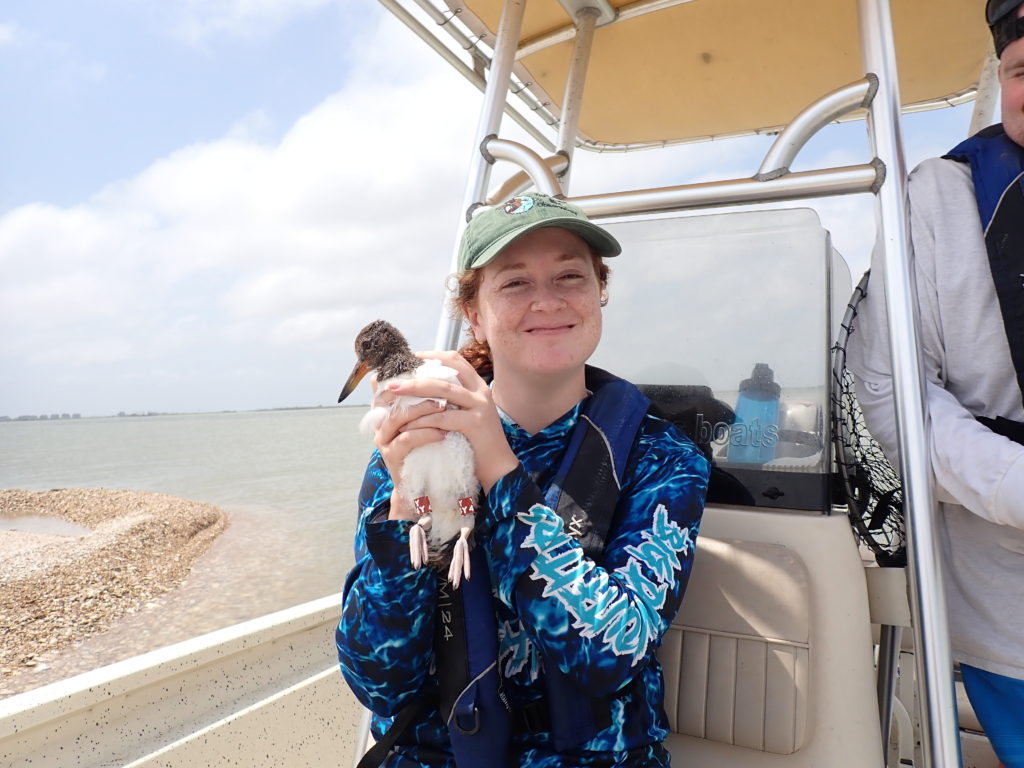 Since the tide was high, there wasn’t much room for it to run when we let it go and I was afraid it would swim to get away from us so before we let it go, we got the boat ready to go so we could make a fast exit. We managed to get far enough away from the island before the chick got out into the water so all was well.

When we arrived at CA & Y2’s island they were most distressed so I knew they still had a chick. Celeste and Adam spotted it hiding in the vegetation and we didn’t even have to get off the boat! Excellent! 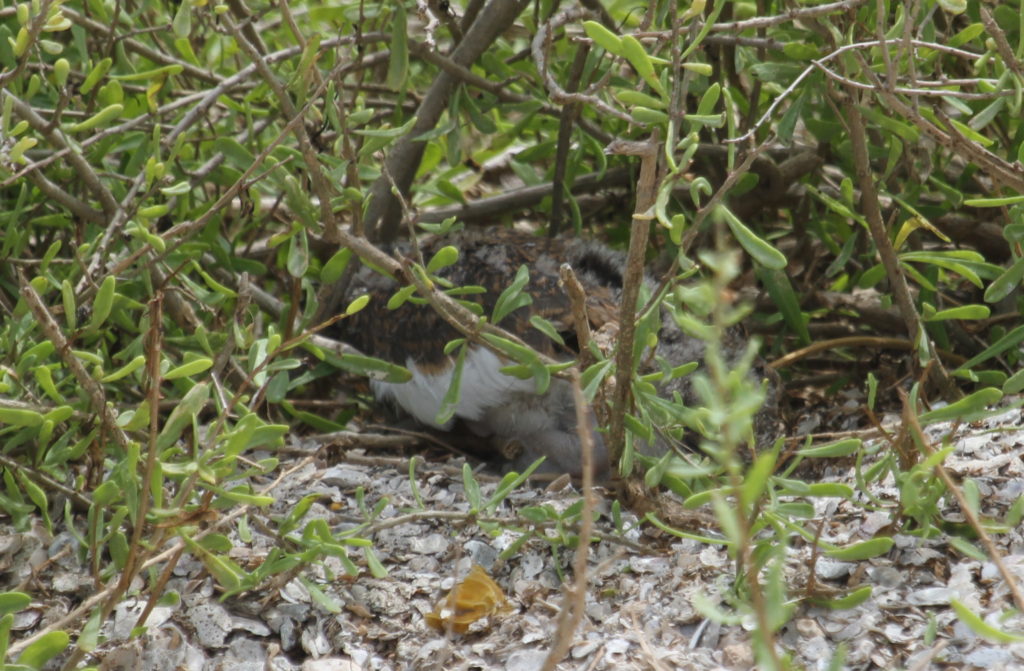 Then we went to check for W5 & JC on the backside of Marker 52. I figured they had lost their chick because there are so many gulls there but when we found them, we also spotted a chick hiding in the vegetation right at the water’s edge. Yay! Way to go W5 & JC!

Since we’d already seen E4A & unbanded, that was the end of the survey and we headed back to the boat ramp after a very successful day. Once again, I was glad to get out of the wind!