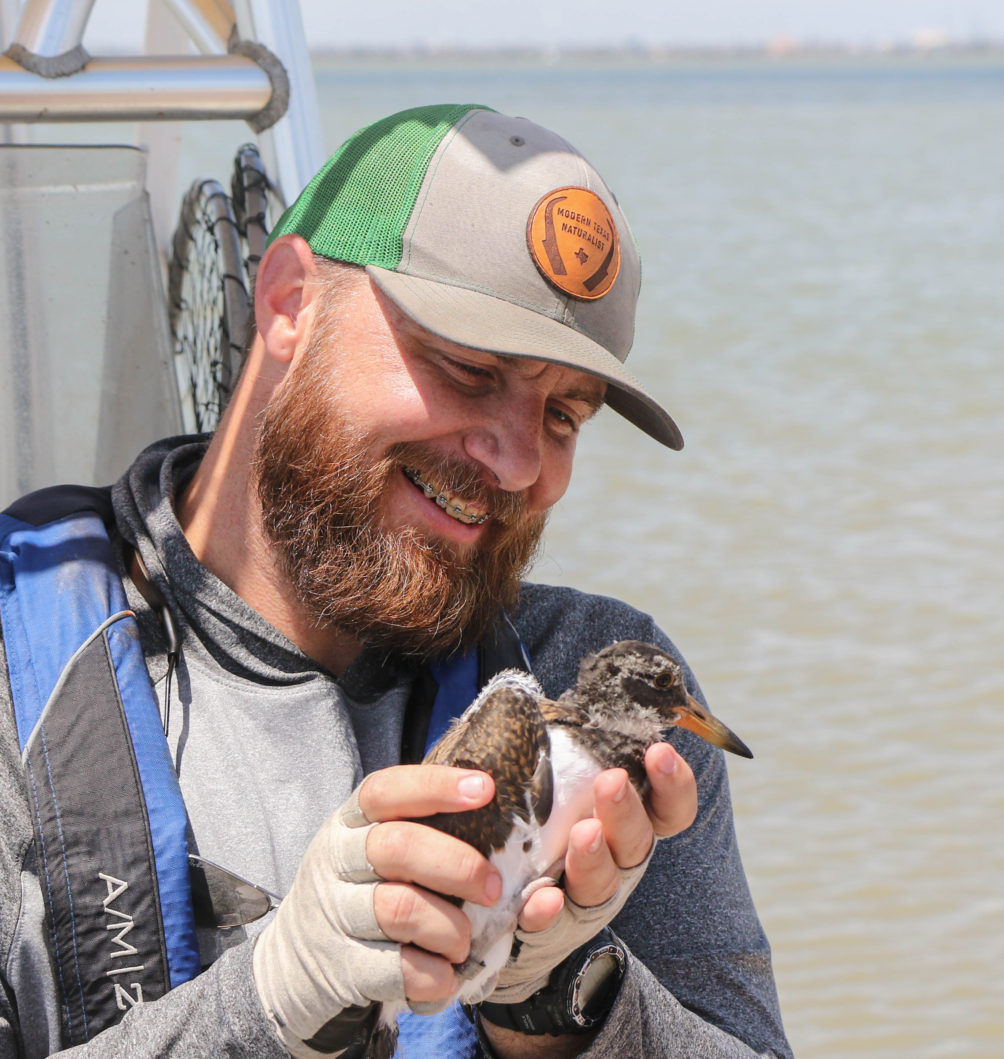 It was a busy week this week but I managed to get out and check on most of the oystercatchers. On Tuesday, GCBO education intern Adam Trujillo went with me to East Matagorda Bay to check on the two pairs that had hatching nests two weeks ago. Sadly, none of the adults were present so both nests must have failed. The strong east wind was blowing water over most of one island so that was probably the culprit.

On Thursday, I was joined by Alan (his back is better!) and some great friends. Romey and Erin Swanson came down from Austin and Barbara Pankratz was here all the way from Comfort! Romey is Audubon Texas’s Director of Conservation Strategy and I’ve been wanting to show him the islands for a long time so it was great to get him out there.

We headed up towards Swan Lake first thing before the wind picked up. 20 & unbanded were standing on their island at the end of a shell berm. Their eggs were gone and it wasn’t clear whether they had a chick or not so I guess we’ll just have to keep watching. LR was on his island alone so no new nest for them yet.

I wanted to sneak up on K7 & unbanded again because I suspected they had more than the one chick we banded last week so I again went down by X3 & unbanded to enter Swan Lake proper. We only saw one of X3 & unbanded but suddenly the other one appeared from somewhere and flew around the boat. I’m sure it was hiding in the vegetation with the chicks so we left them to their business and moved on. 39 was on her island alone so no new nest for them either.

We looked from afar but did not see K7 & unbanded where they had been trying to hide from us last week so we motored over and surprised them on the other side of the island. They are used to us coming in from the opposite direction so they weren’t ready for us. At first we only saw the adults but then a chick appeared. Then another and then another! They have three chicks! There was much excitement aboard the boat and before the chicks could get their act together and hide we all jumped off and grabbed them. I didn’t want to leave the banded one on the island without the other two so we got all three to keep them together. We banded the other two Y5Y and Y6Y. I think they make quite a nice trio! 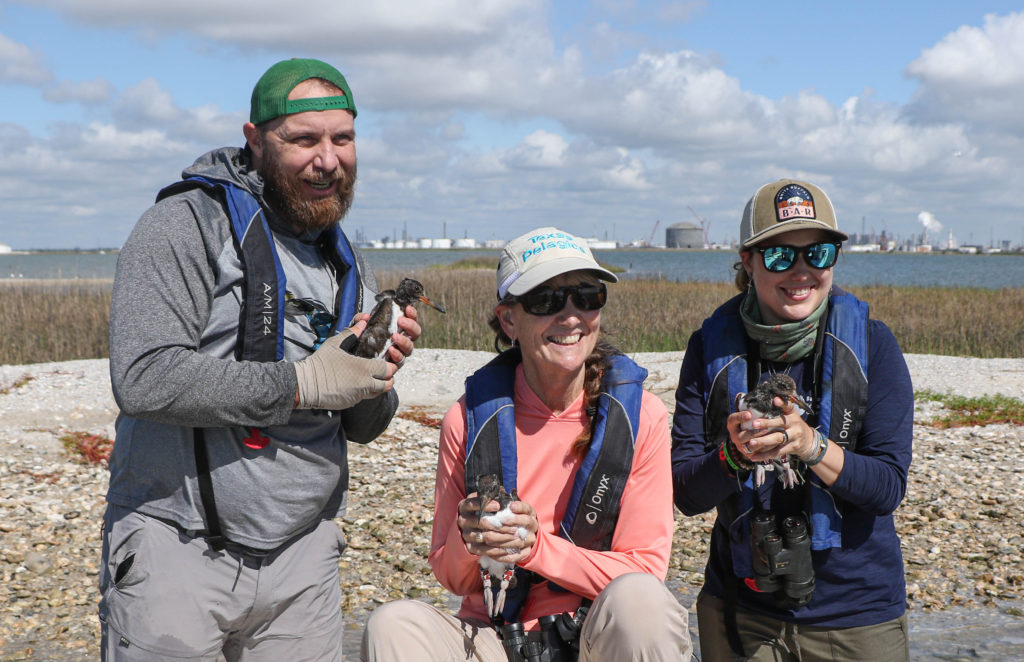 We headed back down to West Galveston Bay and went to Struve Luci. This is an Audubon Island and has the only Black Skimmer colony left in West Galveston Bay so I really wanted to show it to Romey. All the oystercatchers were there doing their thing except LT & JA and their chick. They must have been off roaming the bay somewhere now that their chick can fly. 12 & unbanded’s chicks are looking quite spiffy. 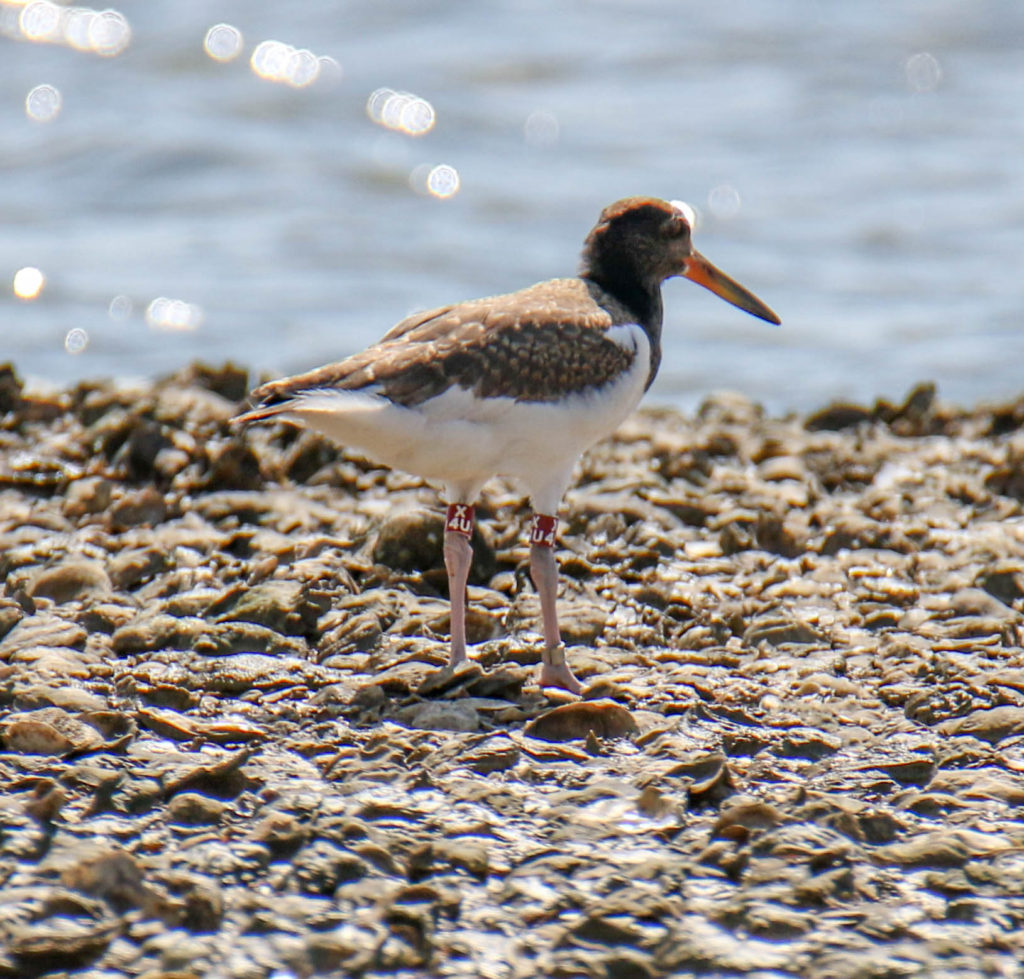 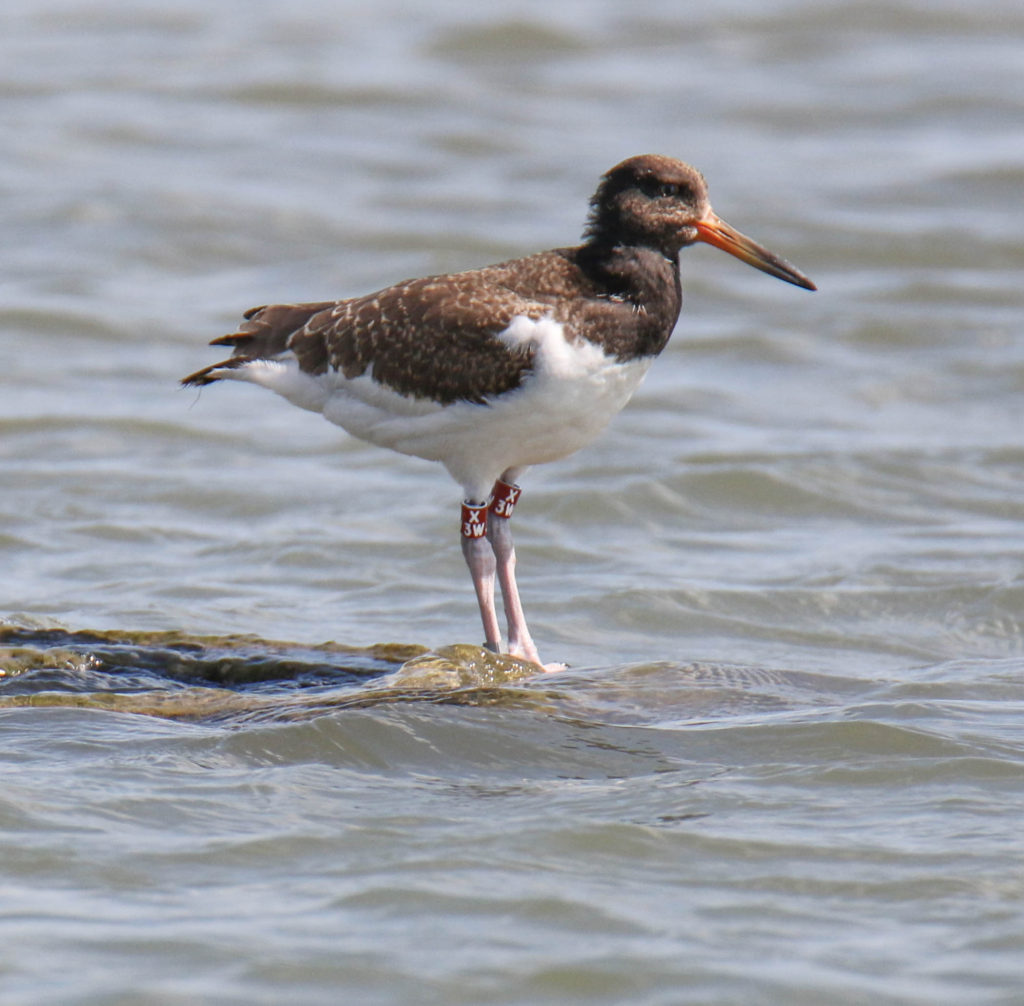 L9 & unbanded’s eggs were gone so the gulls must have gotten them. I wish they’d laid their nest earlier! After we counted the skimmers and checked the game cameras to make sure they were working, we went and found E5A & unbanded’s chicks to band them. They are now W8Y and W8U. 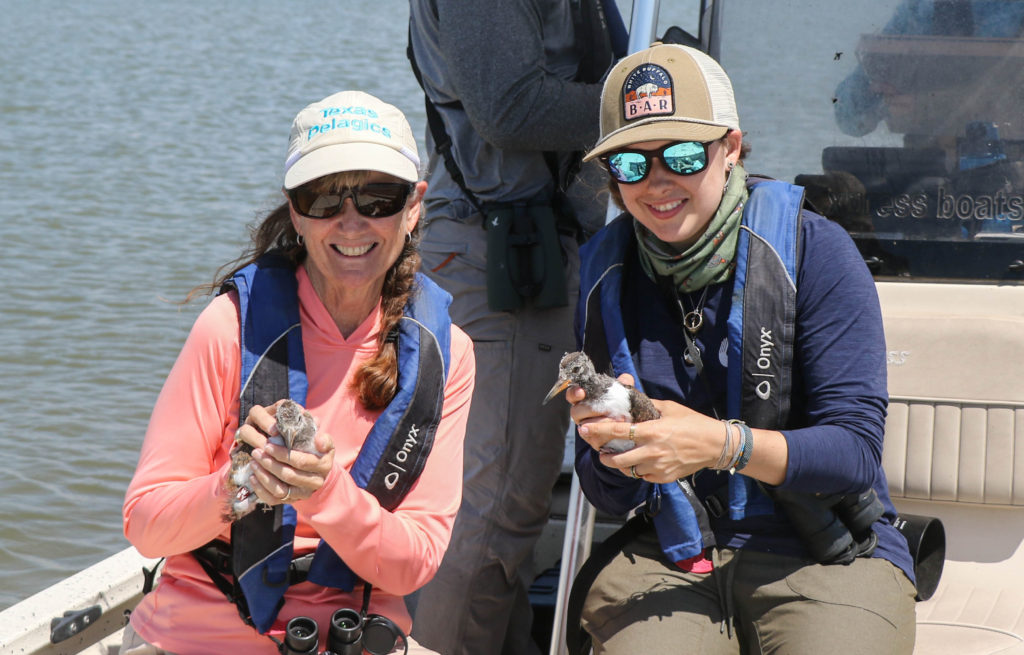 Then we headed to Jigsaw where we discovered that X2 & W2Y had a new one egg nest. I am not sure they can succeed with all the gulls there but I give them credit for trying. I am not sure what’s happening with the other two pairs there. They don’t seem to have nests though.

We headed along the Galveston shoreline and found YK & unbanded lounging in the sun. I wish I could do that all day! But I don’t much like oysters so I don’t think I’d be very successful as an oystercatcher. We didn’t find 16 & F9A anywhere.

We found a few youngsters on the docks as we headed down to Gangs Bayou. There was a wade fisherman in the water near A4A & unbanded and they were standing near some vegetation so I’m hoping that means they were hiding their chicks there. We’ll investigate more next week.

I headed to South Deer but didn’t go to A1A & unbanded’s territory like I usually do. I wanted to approach them from the opposite direction to see if we could get a glimpse of their chick so we went to Y7 & unbanded first. It was time to band their chick but we couldn’t find it in all the vegetation. Dang. There are just too many places to hide there!

F1A & E2A and their chick were doing fine so it was time to head over to A1A & unbanded. My sneak attack worked. They did not expect us to come from the other direction and didn’t realize it was us until we’d spotted where they were. 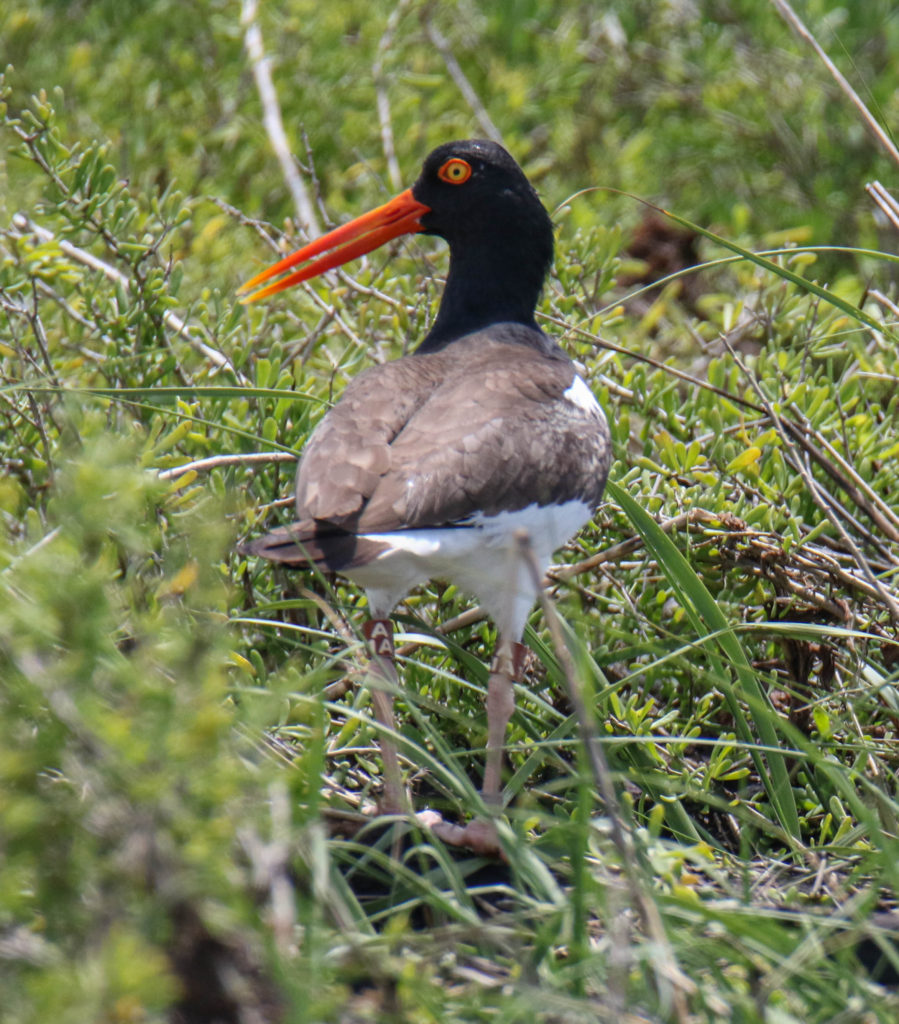 The Royal Terns arrived and pushed the oystercatchers down the island a bit. 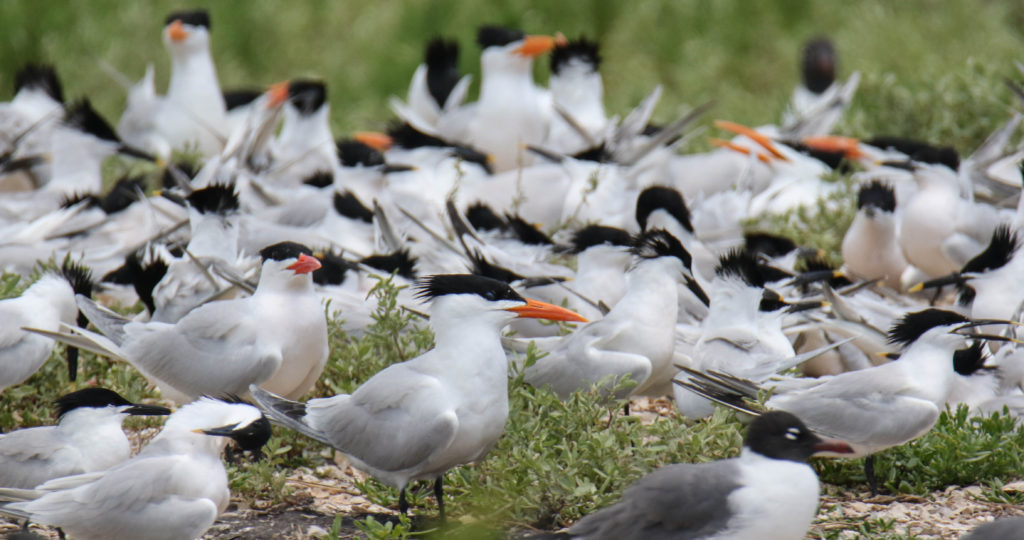 Unfortunately even though they didn’t see us coming, we still didn’t see their chick anywhere. We looked and looked but there’s just no finding a hiding chick when there are so many places to hide. I did find a Diamondback Terrapin though and I think Romey and Erin was just as thrilled with that as with the oystercatchers. Erin had never seen one up close. 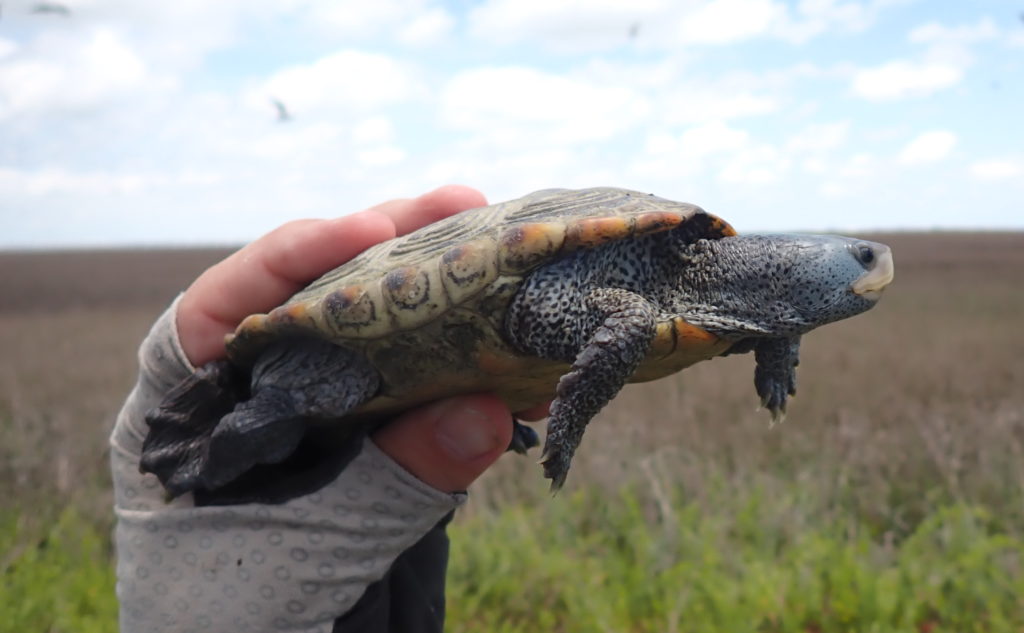 So we headed to North Deer without banding either of the chicks on South Deer. Maybe we’ll get another chance next week. Everyone was doing fine on North Deer and we spotted YM in the vegetation where he was surely hiding his chicks. 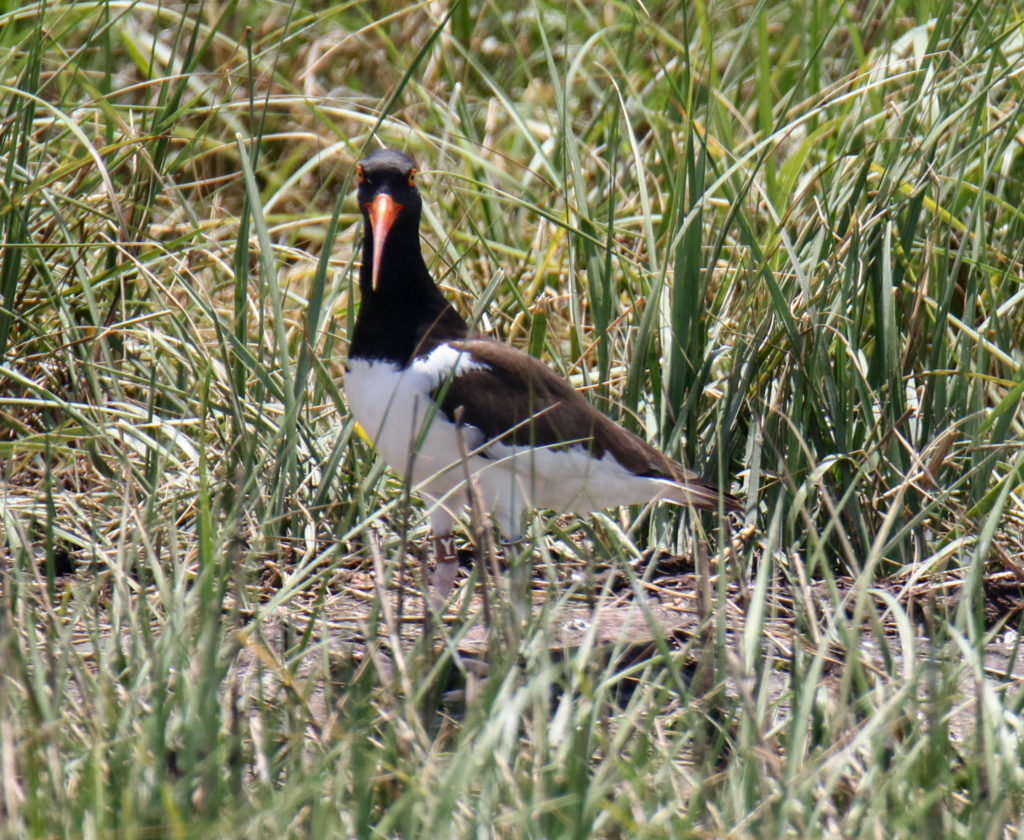 His mate was likely off getting food. We headed over to Marker 52 to band JJ & P4’s chick but when Romey jumped off the boat to go chase it, it flew away!!! Dang, I miscalculated when that one was going to fledge badly. Oh well, at least it fledged! JJ & P4 haven’t fledged a chick in many years so it’s a very happy thing that they did this year.

On a more sad note, W5 & JC were standing out on a reef edge so I don’t think their chick made it. They would have been up in the vegetation if it was still alive. All those gulls are just too much for a little chick to avoid.

FR & unbanded and their chick were on their island and the chick ran when it saw us so I don’t think it can fly yet. Definitely by next week though. The last task of the day was to band CA & Y2’s chick. This one didn’t have much place to hide and we found it easily. Meet W9X. 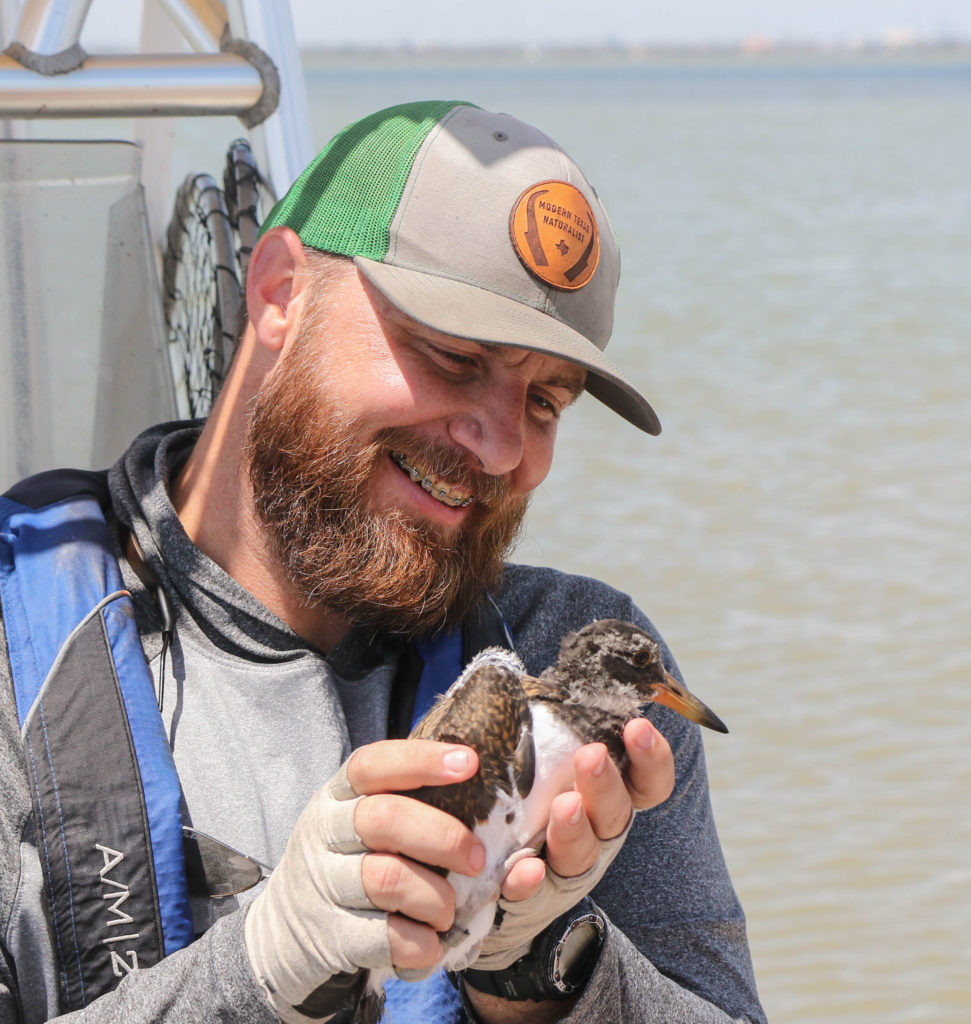 That was the end of another great day with the oystercatchers! Lots of pairs are fledging chicks this year!