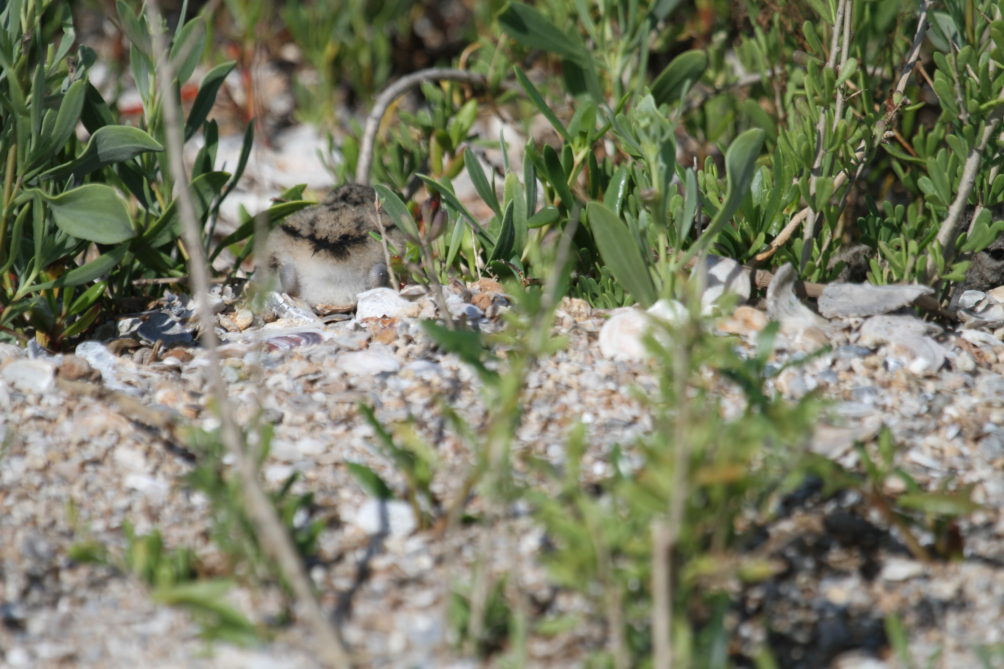 On Tuesday, Taylor, Kenlynn and I headed out to check the birds in the Brazoria Bays. We haven’t been out to check on them in a month because the wind has been too bad and we had too many other commitments so it was great to be back out there. We headed straight to the mooring facility at the west end of West Galveston Bay. Last time we were out, the pair there had a nest which should have hatched shortly after we last visited. We found the male, F2A, there with one big chick! Yay! Since we don’t get out here often, we went ahead and banded the chick W5U. 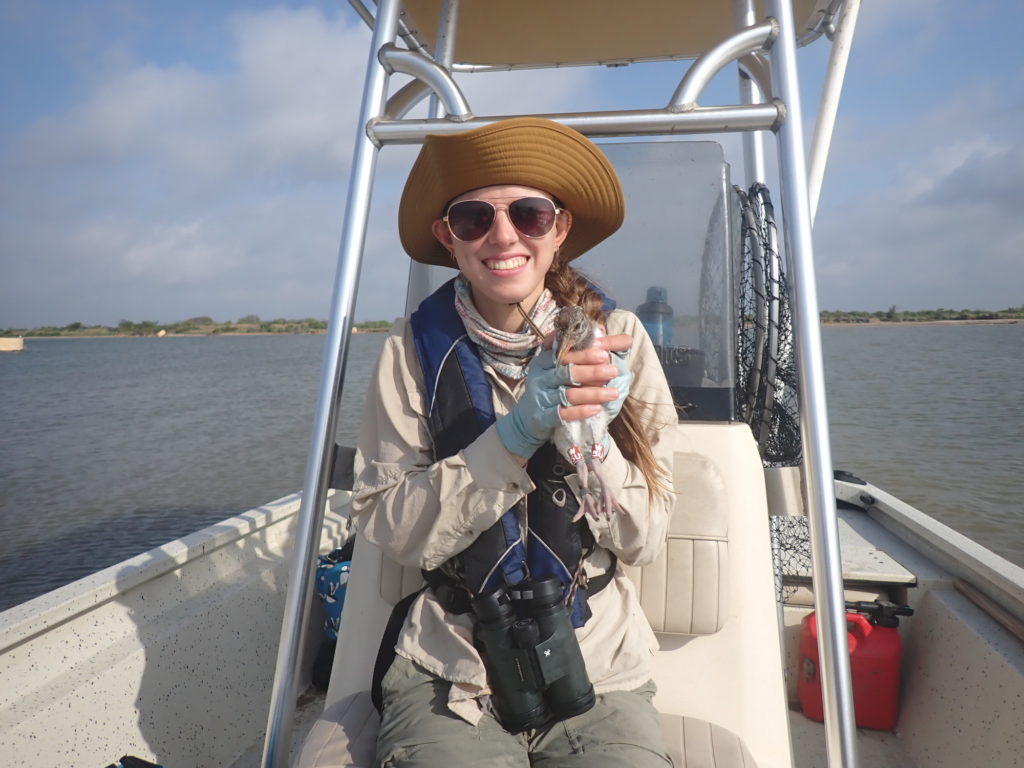 The pair on Alligator Point Island wasn’t home so we headed down to Drum Bay. We found K0 & U7X hanging out on the island where their nest had failed but they didn’t have a new one. E7A was hanging out on her island though it was mostly underwater from the high tide. Because the tide was high, I couldn’t see the reefs and I managed to get the boat stuck hard on one as we tried to head into Christmas Bay. I was afraid we’d be stuck for a while, but the three of us managed to push it off the reef. Girl power!

AR & unbanded and their chick were not home. Not surprising since their chick is surely fledged and the tide was high. They were likely on the beach but I didn’t have time to drive over there and check for them later.

It was too windy to go out to West Galveston Bay Thursday so I went Friday. Alan is in Belize (lucky him!) so I was joined by Brian and Jennifer Kolthammer, GCBO volunteers extraordinaire.

We started by heading up towards Swan Lake. On the way, we found that both 20 & unbanded and LR & unbanded had new one egg nests. That confirmed that 20 & unbanded’s last nest had failed. Once we got to Swan Lake, we went to look for 11 & unbanded. I hadn’t checked on them the last two weeks because there was too much else to do and they rarely lay a nest because their territory is not good. So imagine my surprise when we found them along the shoreline with two small chicks! They snuck a nest by not only us but the coyotes too. That is quite a feat. I sure hope they can keep those chicks safe. I wasn’t quick enough with the camera to get a photo of them before they ran and hid.

Then we went to check on K7 & unbanded and their three chicks. At first we couldn’t find them but then they popped up from hiding with all three chicks in tow! One by one the chicks spotted us and took off flying to hide in the vegetation. All three fledged! So awesome! 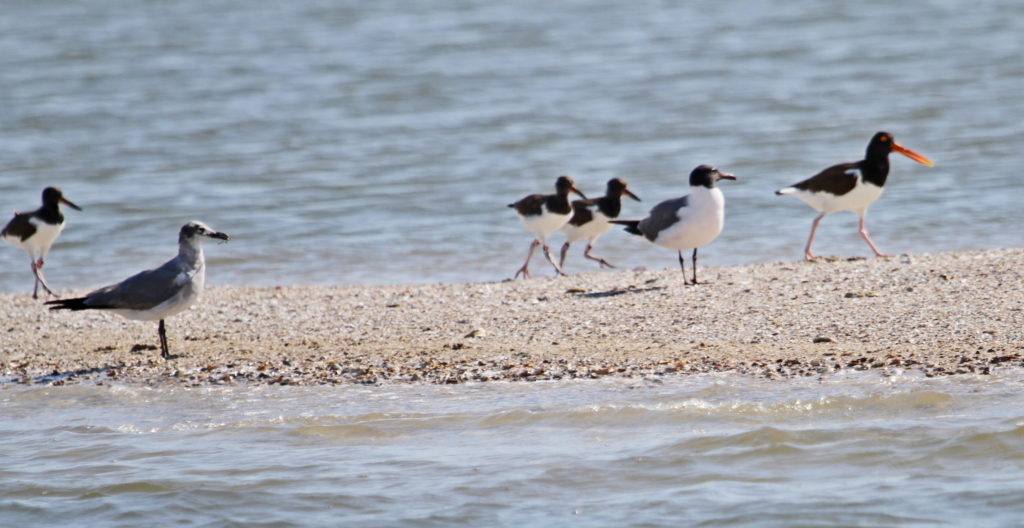 We checked on X3 & unbanded but they were being cagey and not giving anything away so we motored back across the lake to see if we could get a photo of 11 & unbanded’s chicks. This was all I could manage! 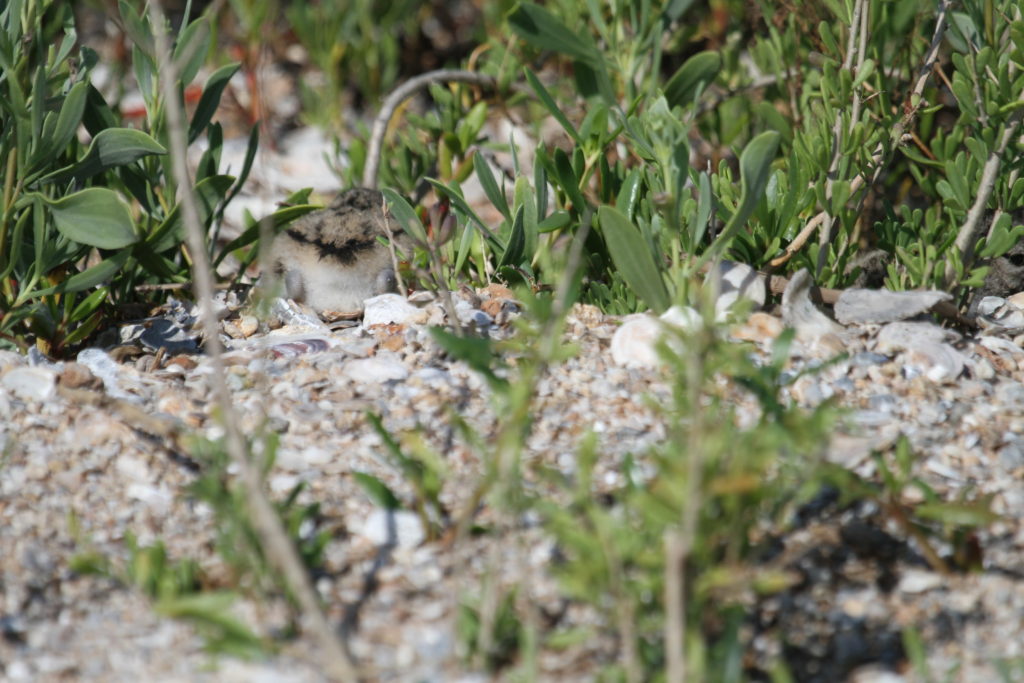 Then we went back to X3 & unbanded. They weren’t expecting us to come back so we saw where they were hiding in the vegetation and I saw one chick trying to run through the thick stuff to hide. At least we know they still have one!

We headed back across the bay and went to Struve Luci. LT & JA and their chick were back on their reef (we didn’t see them last week). 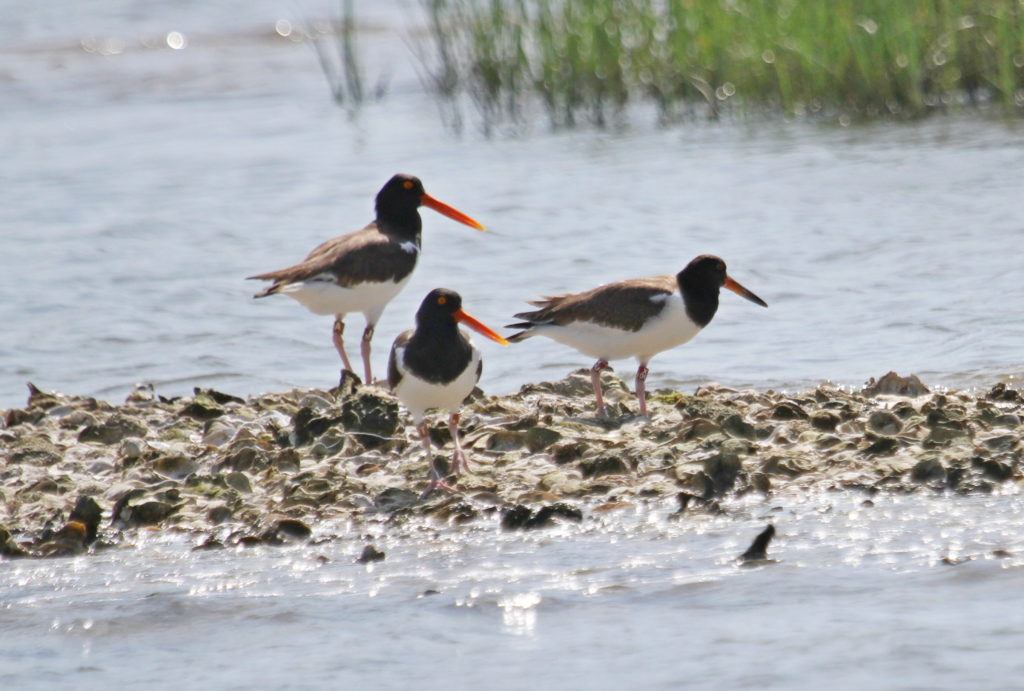 I am not sure what’s happening with HM & X7. The past two weeks we’ve only seen one of them which usually means the other one is on a nest somewhere but though we searched the shoreline from the boat, we didn’t see it. Then suddenly they were both circling the boat and they landed together on one of the docks. If they have a nest on Galveston Island somewhere, they will have a tough time getting it to hatch and an even tougher time keeping the chicks alive until they can fly. Oystercatchers are determined though so maybe they can pull it off.

We headed to Jigsaw. LH flew out to greet us and circled the boat. Not sure why because as far as I know he and his mate JX don’t have a nest or chicks. We looked again but didn’t find one. The Royal and Caspian Terns are nesting in full force now so looking for an oystercatcher nest is tricky without disturbing the terns. 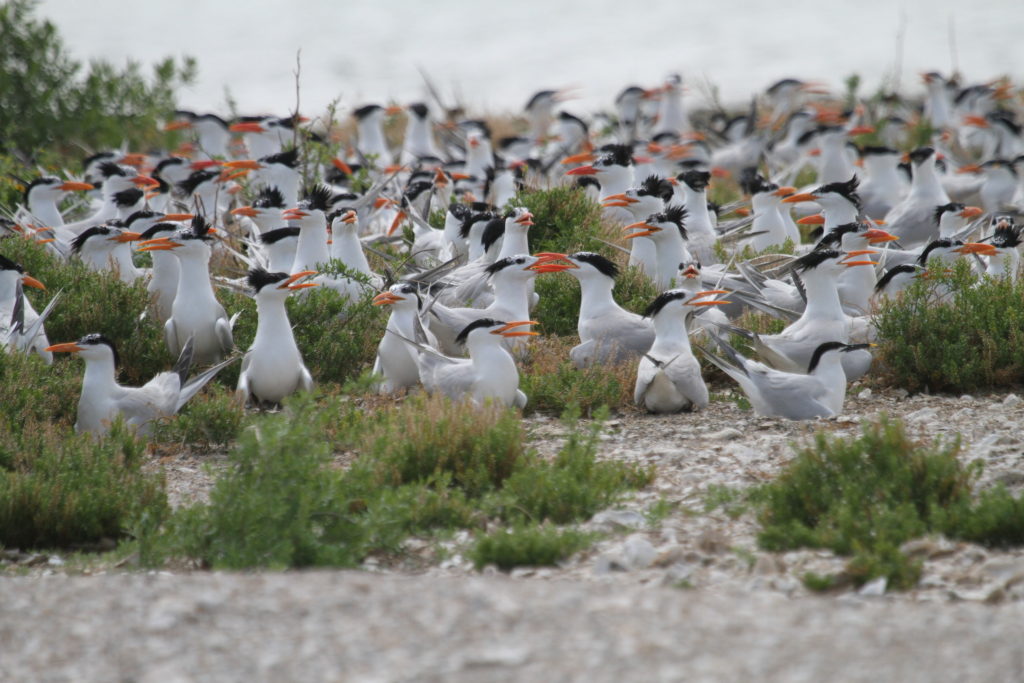 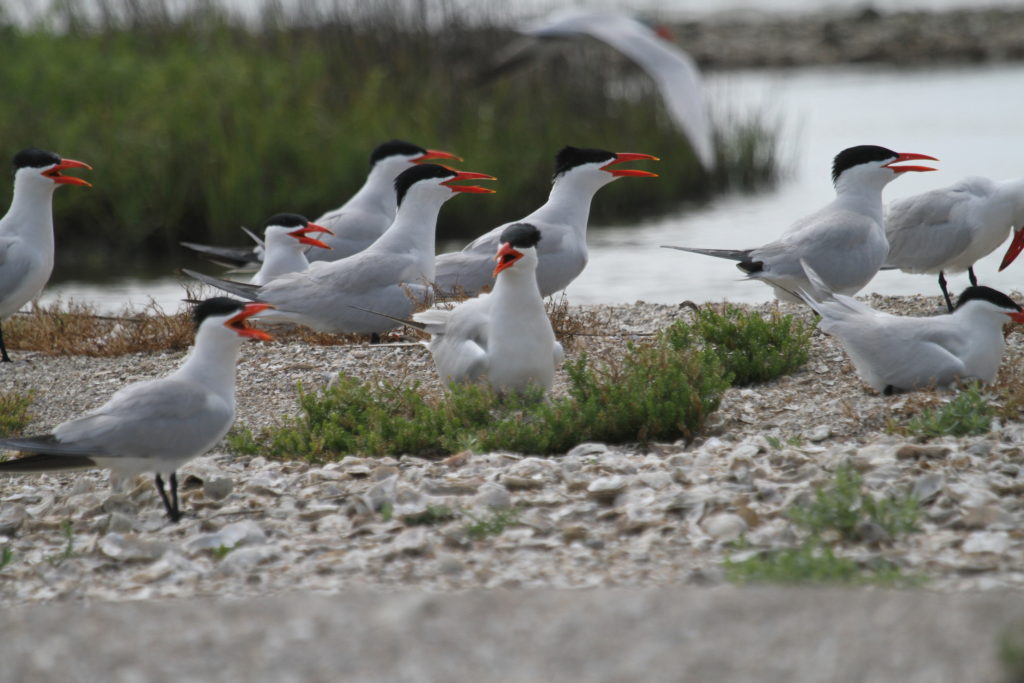 X2 & W2Y’s second nest had failed. They just don’t have a chance with all the gulls there. YE’s mate wasn’t limping anymore so she must have gotten her foot free from the entanglement. That’s good news! We checked along the Galveston shoreline for YK & unbanded and 16 & F9A. Of those we only saw YK. His mate did not appear to be on a nest anywhere though.

We found 16 & F9A on a dock hanging out with the youngster crew. About 15 oystercatchers in all.

Down at Gangs Bayou, A4A & unbanded popped up from the vegetation and were followed by a big chick! Awesome. We will band that one next week.

We headed to South Deer hoping against hope that we had another chance to band A1A & unbanded’s chick because hadn’t been able to find it last week. This week they must not have been expecting us because they were on the shoreline and the chick was out in the open! It was big but it ran when we pulled up so it couldn’t fly yet. I saw where it ran into the vegetation to hide so it was pretty easy to find it. Yes! It is days from fledging so we got it just in time. Here’s the newly minted W5X. 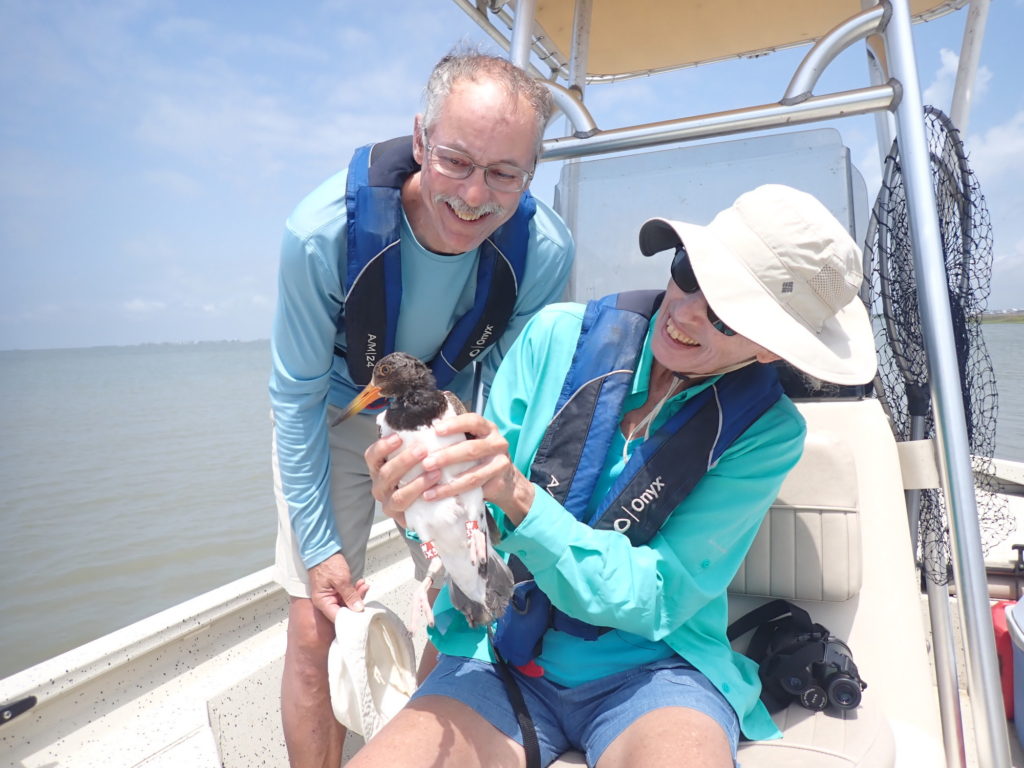 Then we went to try the same thing on Y7 & unbanded because we hadn’t been able to find their chick last week either. Different story here though. They were back on their beach without a chick. For the past several weeks they’ve been hanging out in a different spot and we thought they were hiding their chick there but now I’m wondering if their first nest failed and they laid a new one there. If so, the gulls must have gotten it. At any rate, this week they had no nest and no chick. 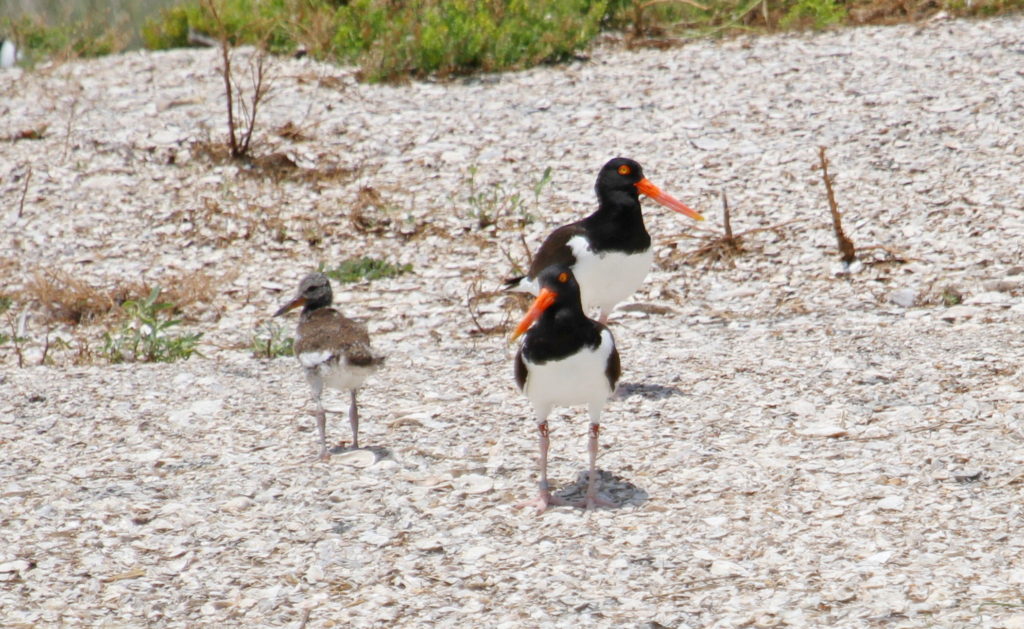 We will band that one next week. Then it was time to band YM & JH’s chicks. We found the whole family out in the open along the shoreline so it was easy for Brian and Jennifer to run down the chicks. We banded them W5Y and W6X. 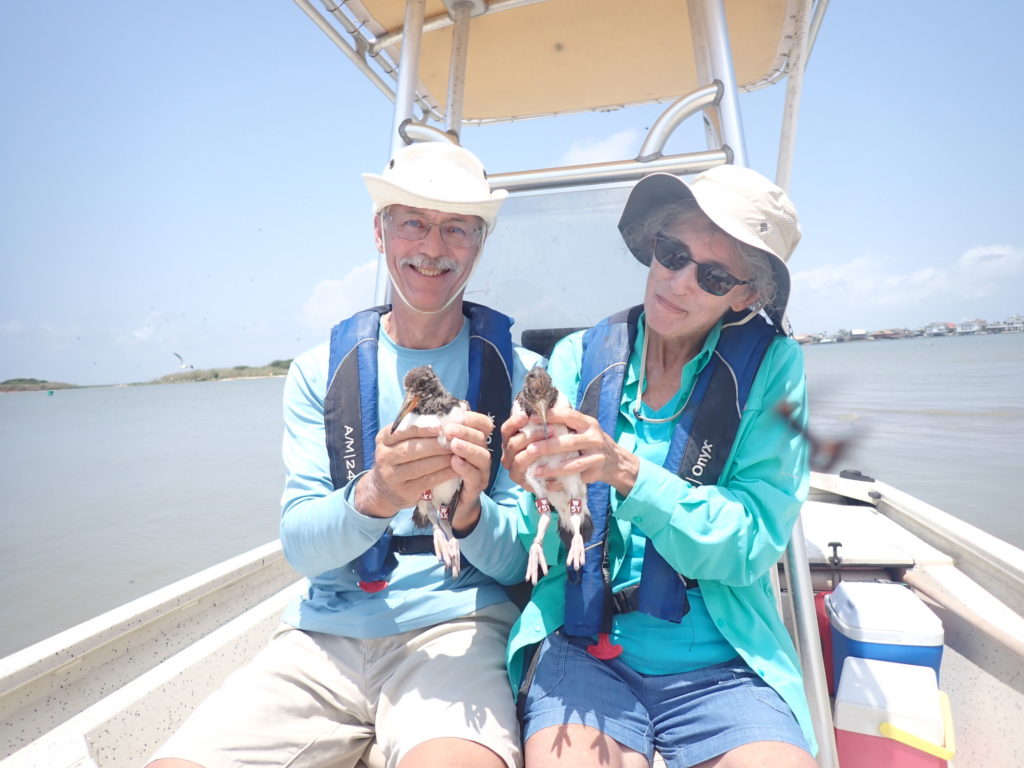 We didn’t see J6 & UF anywhere so we went to check on JJ & P4. We found them on their beach but their chick was not with them. Last week we tried to catch it to band but it could already fly so maybe it was off exploring somewhere. Let’s hope its back next week.

We saw E4A & unbanded on Marker 52 again. Perhaps they are considering moving from Jones Bay to that spot. They’d have a better chance there for sure. W5 & JC were loafing along their shell ridge so no new nest for them. Last year, they waited until the gulls were done nesting and then laid the latest oystercatcher nest I’ve ever found. We’ll see if they do that again.

As we approached FR & unbanded’s territory, I saw the whole family fly out to a reef so their chick is fledged! Yay! 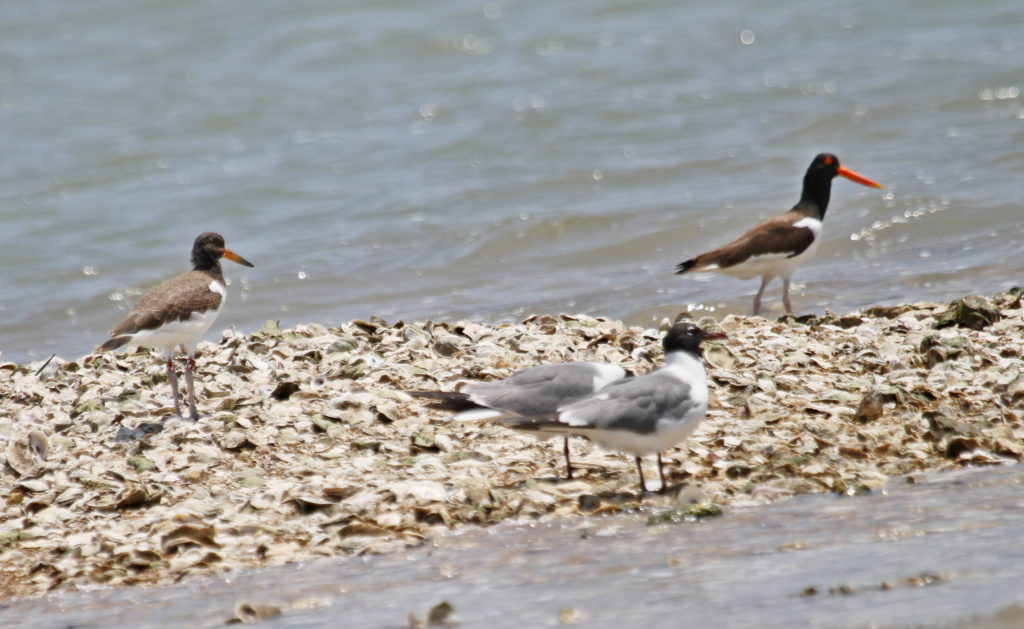 The last pair to check was CA & Y2. We saw their chick running along the backside of the island when we motored over so it obviously can’t fly yet. I didn’t want to get too close because that island is small and the chick might have tried to swim to get away from us. We backed off and left them alone. It must be days away from flying so we’ll check that out next week.

Another survey complete! The birds are doing fairly well this year but I’m sure there are more mysteries ahead!