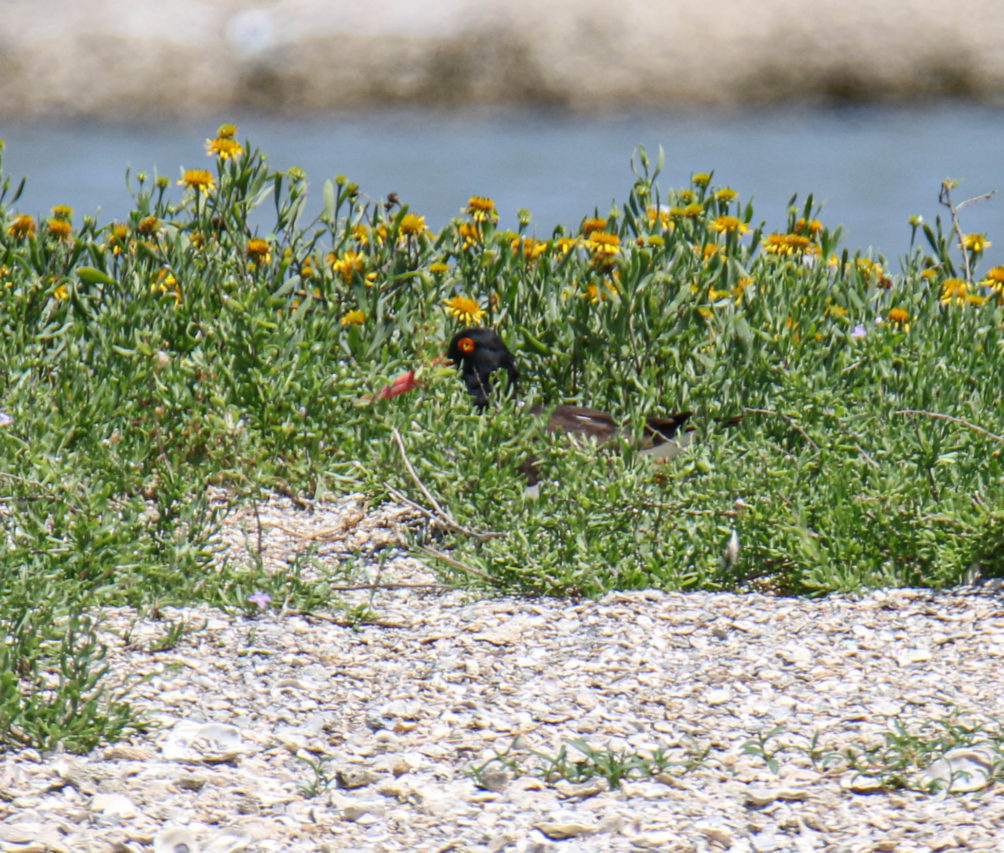 This week was our Experience Auction trip on West Galveston Bay. Kyle Jones and him mom Joann joined us for a day on the water. Fortunately, the weather was beautiful and the wind was perfect at about 10 mph. That doesn’t happen very often! Right off the bat we saw three oystercatchers on the reefs by the boat ramp. There has been a pair hanging out there but they haven’t nested. This week there were two banded birds and one unbanded bird but the banded birds weren’t the banded one from the pair! Interesting.

We headed up to Swan Lake and checked on 20 & unbanded and LR & unbanded on the way. 20 & unbanded had increased their egg count to three in their new nest. It’s in a good spot so as long as the coyotes don’t discover it, they might do well. LR was alone on his island and incubating a single egg. What’s up with that Mrs. LR? Only one egg? You never know! That might be the one egg that makes it.

We entered Swan Lake and went to check on 11 & unbanded who surprised me greatly last week by having two small chicks. This week 11 was there by himself and acting quite frantic that we were in the neighborhood. 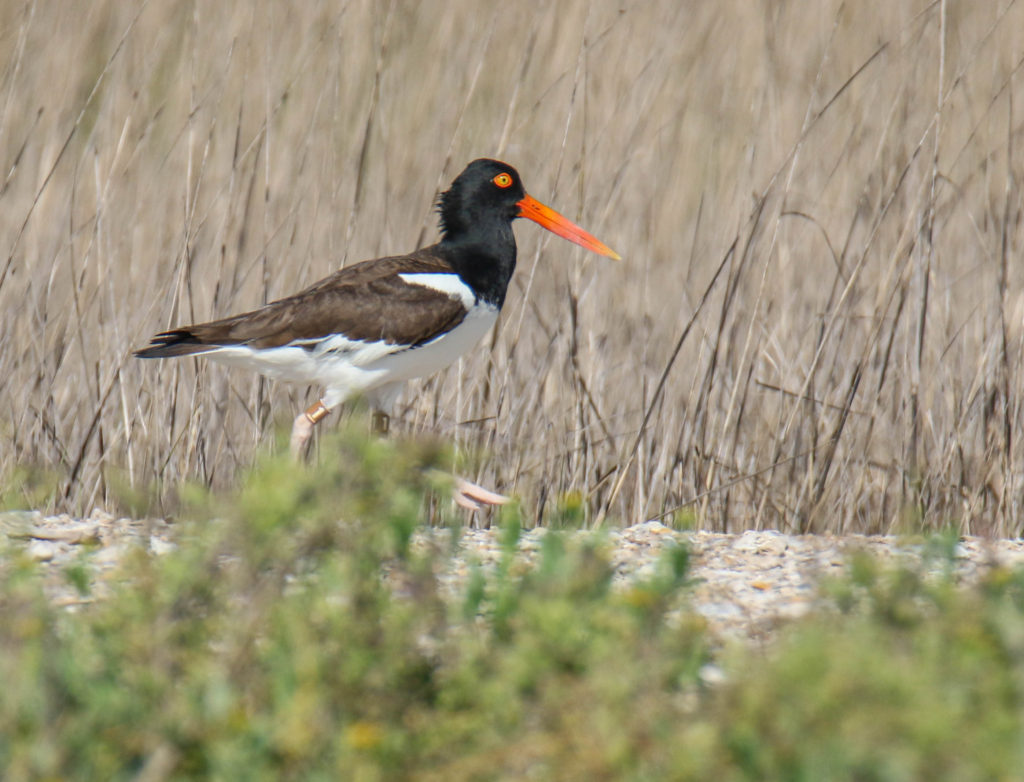 I guess he was minding the chicks alone while his wife was having a mother’s day out and he didn’t want any shenanigans from us. We never saw the chicks but I’m sure they were there somewhere. We headed over to K7 & unbanded. I had seen all three chicks make a short flight last week but this week one of them took a swim to get away when we motored over so clearly that one, at least, is not comfortable flying yet.

We motored around and put the boat between it and open water so it would swim back to the island, which it did. We spotted the other chicks with K7 and they seemed pretty at ease so perhaps its just the one that can’t fly well yet. Next week they’ll all be good to go.

39 was on the breakwater and her mate was not to be found. Then there was X3 & unbanded. They have a chick but their island is so vegetated that its quite difficult to find it. I gave it a go but couldn’t find it which wasn’t unexpected since we hadn’t actually seen it. We went and checked on 11 again (still not letting us see his chicks!) and then we went back to X3 & unbanded hoping to surprise them. They were ready for us though and we still couldn’t find the chick. The weather forecast for next week does not look promising to get up to Swan Lake so that chick just might have to go unbanded.

We headed back down to West Galveston Bay and went to Struve Luci. L9 & unbanded were hanging out on a grassy area on Galveston Island where they sometimes go when the skimmers take over their part of the island. LT & JA and their chick were not home. E5A & unbanded were still keeping their chicks hidden which is a little troubling since they should be fledged by now. If they aren’t out in the open next week we might have to investigate. 12 & unbanded and their chicks were hanging out where they usually are. Their chicks are looking quite nice these days. 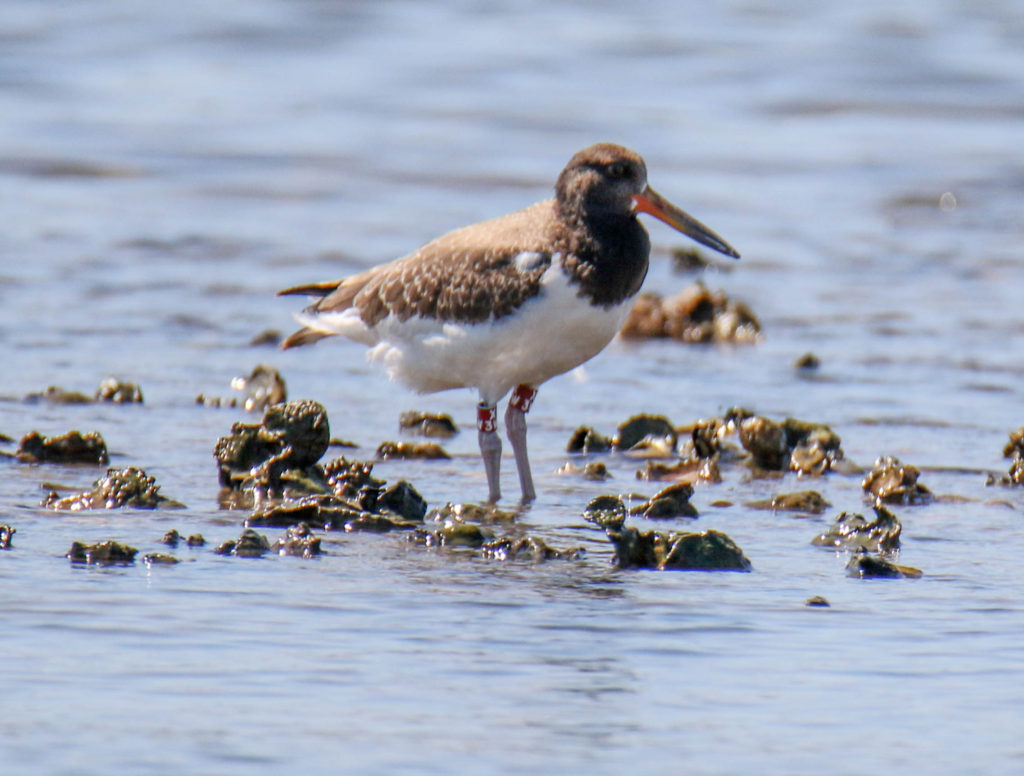 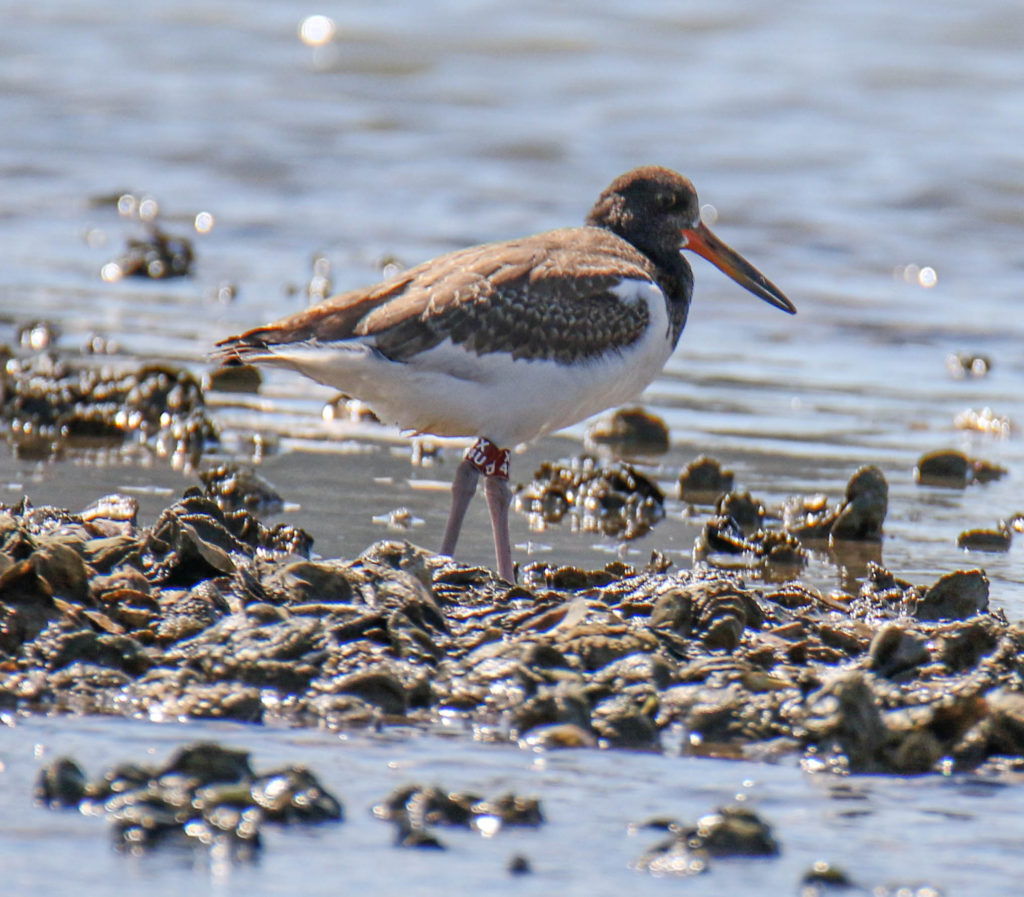 HM & X7 were hanging out on the island too so I guess they don’t have a mystery nest hidden somewhere after all. I feel for them. Their part of the island has eroded away to reef so they have no safe place to nest now. I videoed the skimmers so I can count them later, counted gull nests and checked the game cams and then we moved on to Jigsaw.

The Royal, Sandwich, and Caspian Tern colony there is going strong now and the Caspian Terns already have chicks so I was not happy to see JX get up from a new nest about six feet from the Royal Terns. Dang. I went and got a GPS point and floated the eggs and got out of there so fast that I forgot to take photos. Two eggs and they were new so the nest hasn’t been there long.

The terns were not happy! Alan snapped some great photos of the Caspian Terns. They start with their bad attitude young! 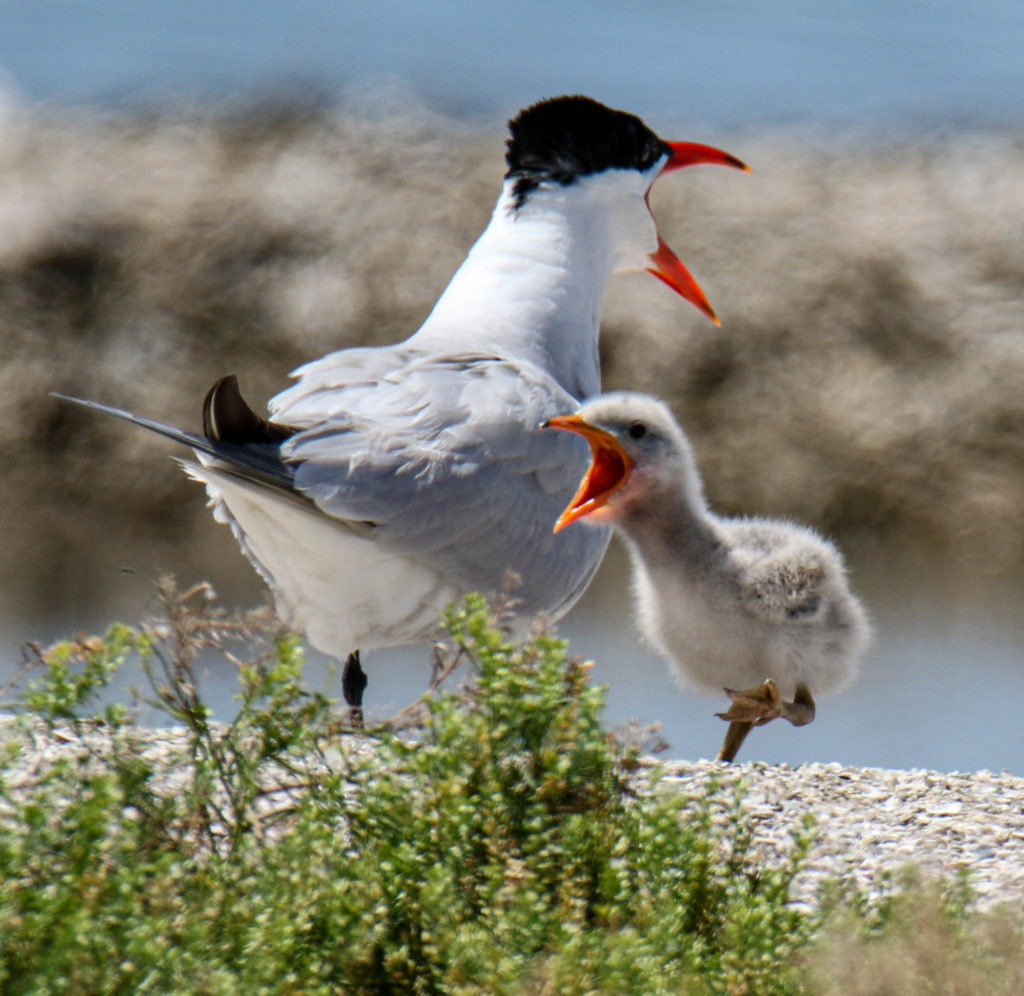 At the other end of the island, thankfully far from the terns, X2 & W2Y were up on top of the shell bank like they had a new nest but I couldn’t find one. While I was searching, Alan spotted either YE or his unbanded mate on a nest in the middle of some flowers. 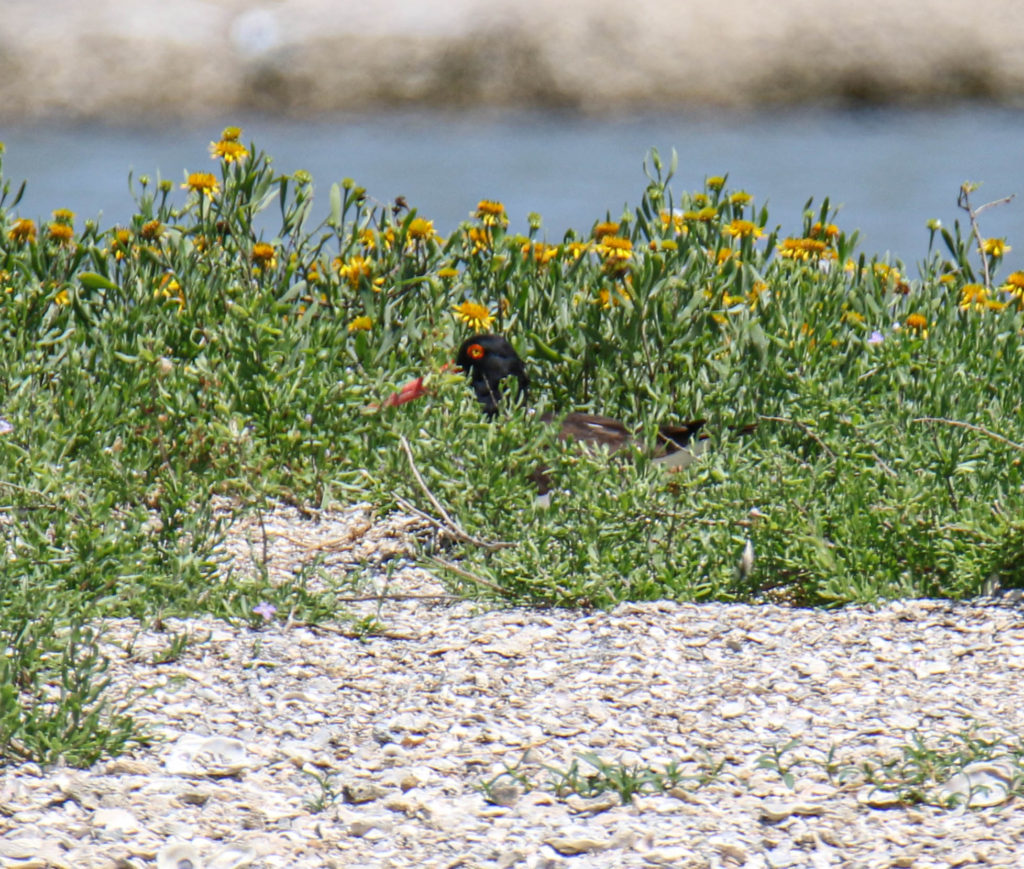 What a lovely spot to sit all day and incubate eggs! Nice placement YE & unbanded!

We searched along the Galveston shoreline but couldn’t find YK & unbanded or 16 & F9A. There weren’t any birds on the docks either. Where’d everybody go?

C8A & unbanded were hanging on the Gangs Bayou breakwater so I guess they haven’t laid a new nest yet. It was time to band A4A & unbanded’s chick and I was hoping they’d be out in the open like they have been the last couple of weeks but no such luck. One of them was there but we didn’t see the other one or the chick. When I got off the boat to look around, the other adult came flying down the shoreline though so I figured the chick was where that adult had come from. I made my way along the shoreline and suddenly I heard the chick give off an alarm call and saw it jump in the water. Good thing I had the dip net because it dove immediately. I was able to get the net in the water just in time for it to swim into it. Phew. Close one.

We banded it W7U and Joann was quite happy to hold it!

It was pretty big so will probably be fledged by next week which is a good thing. The caracaras patrol this area and I don’t want them getting it! We found some of the youngster flock on Confederate reef before heading to South Deer.

For the first time ever A1A & unbanded’s chick, W5X, was standing out in the open so I assume it can fly now or it would have been hiding. It was just about ready to fly last week when we banded it. 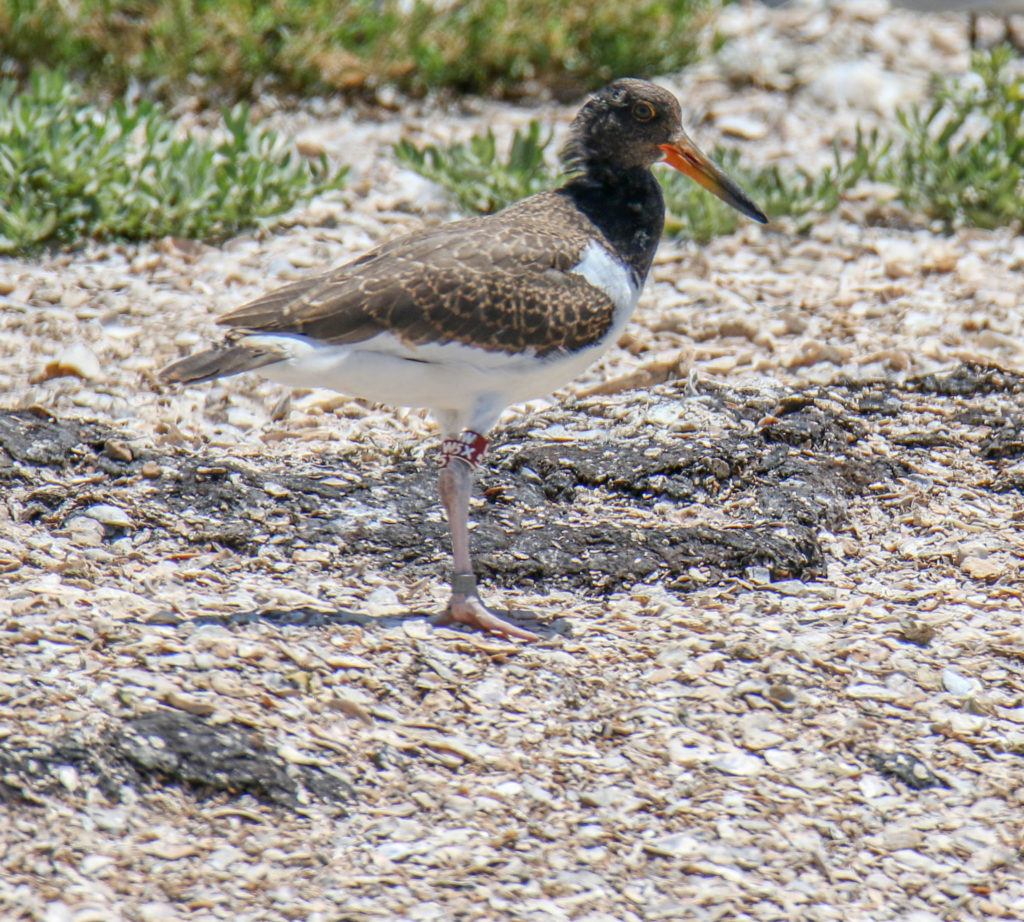 What a handsome (or beautiful!) little chick. Good job A1A & unbanded. Ya done well. I thought perhaps Y7 & unbanded had a new nest because one of them was standing up on the bank where their first nest had been but I didn’t find any eggs when I looked.

F1A & E2A were back this week and their chick X4Y was standing proudly along the shoreline. 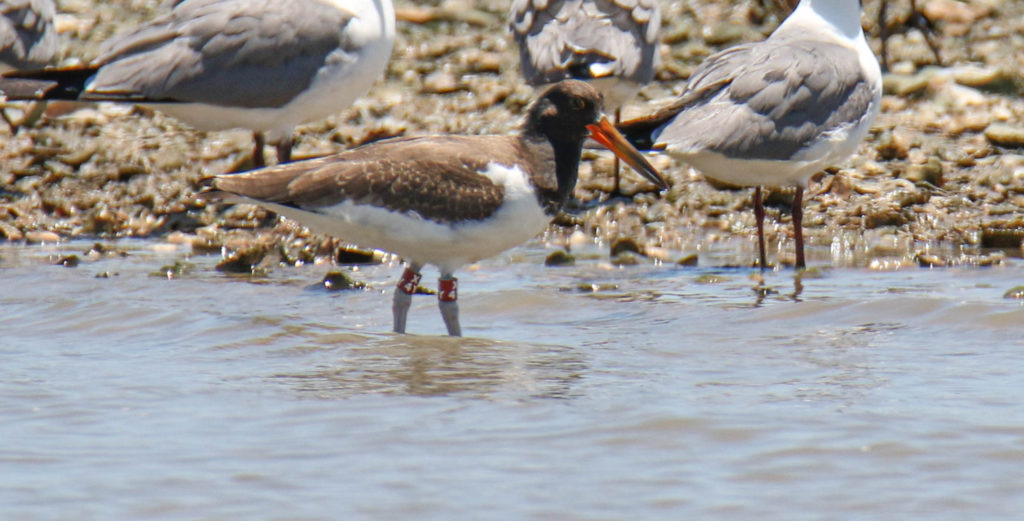 Good job! You two done well also! We headed over to North Deer to band C1A & unbanded’s chick. It was walking along the shoreline so I made chase. It ran a bit but then dove into the vegetation to hide and I was able to get it easily. Yay! It was smaller than I expected since it hatched the same week that A4A & unbanded’s did but once I catch them I go ahead and band them. I don’t want to have to catch them twice because they are a lot smarter about how to hide the second time! We banded it W9U and this time Kyle held it. 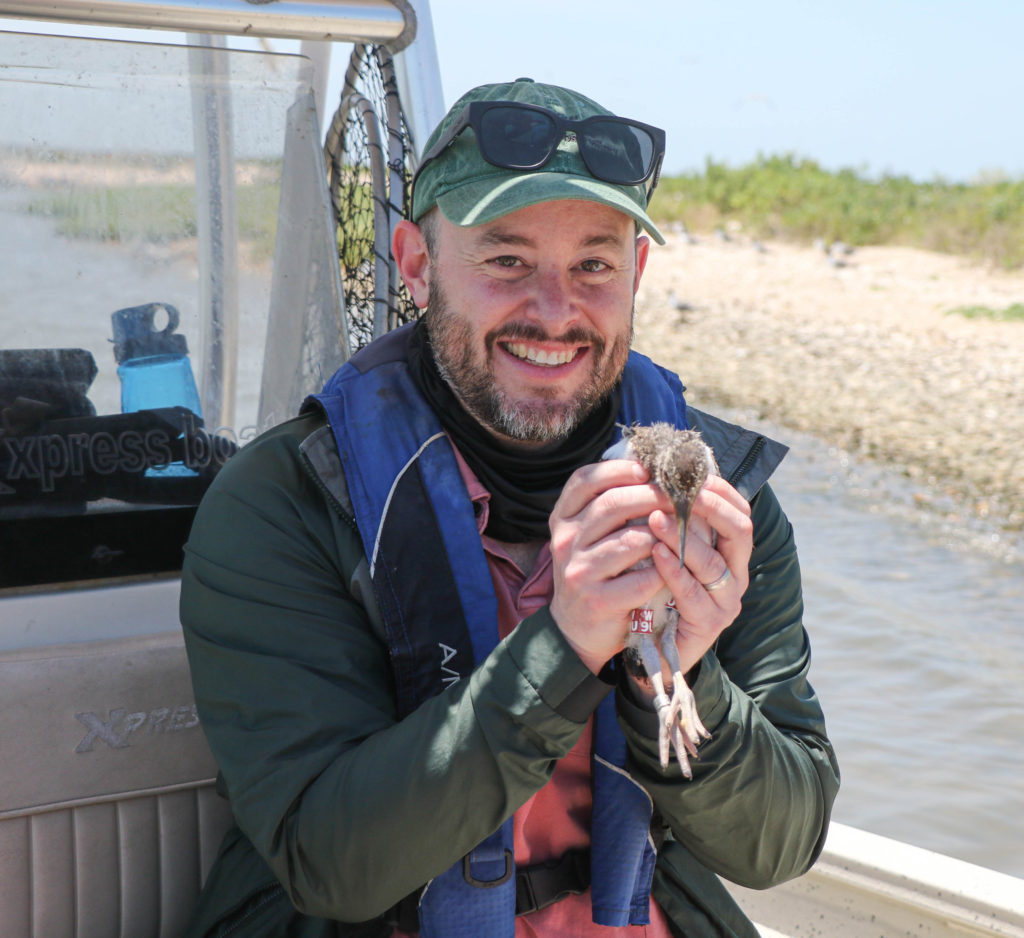 Next we checked on YM & JH and their chicks that we banded last week. We saw both chicks run for cover so I guess they can’t quite fly yet. Next week!

JJ & P4 were on their beach without their chick again this week. Dang. Something must have happened to it. The two most dangerous times in a chick’s life are the first two weeks when they are small enough for a gull to get them and the week they learn to fly. Sometimes when they are first flighted they get into trouble and that must be what happened to JJ & P4’s chick. That is a real shame. JJ & P4 are quite old and I’m not sure how much longer they will be around. P4 is at least 15 and JJ is at least 14. That’s pretty old for an oystercatcher.

Next, we found JC incubating a new two egg nest. There are lots of gulls there so I hope they can pull that off. Her mate W5 was foraging on a reef nearby. FR & unbanded and their chick were on their small reef. Their chick is looking quite nice too! 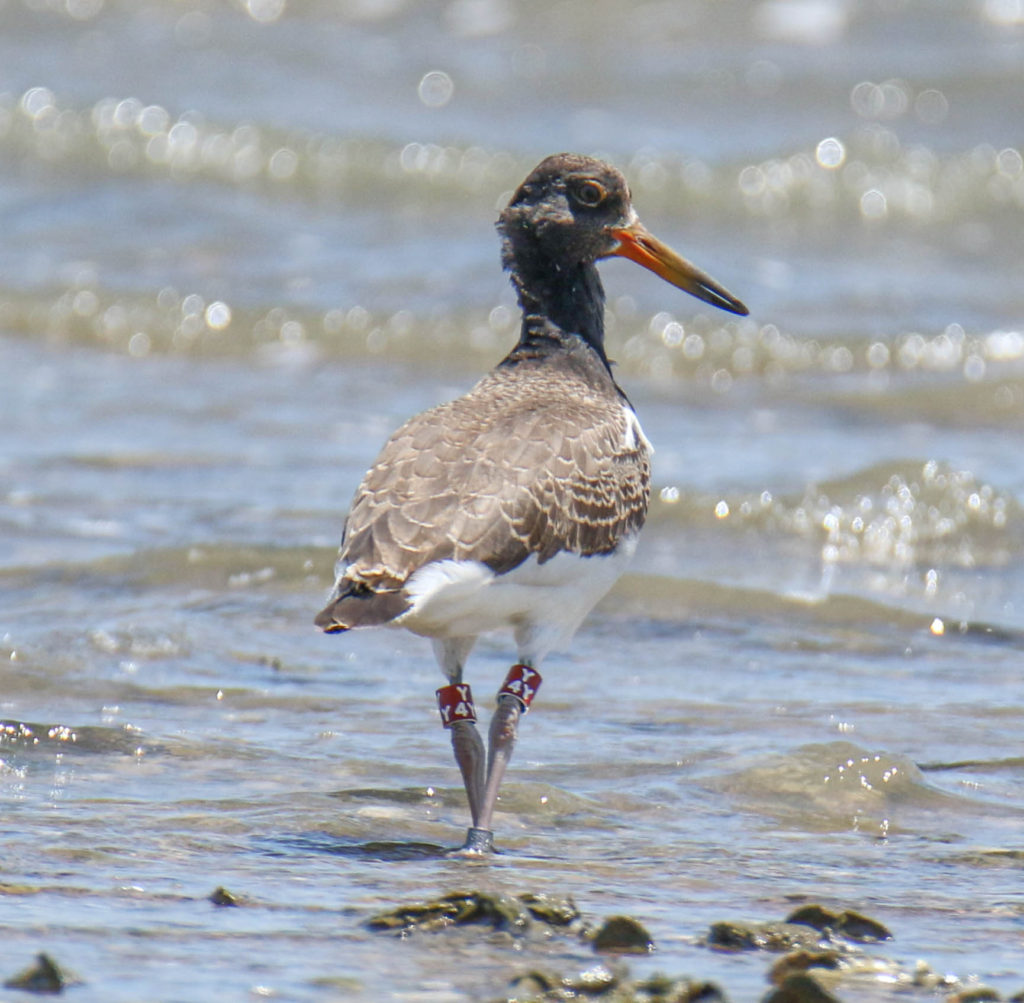 I’m very happy that FR has a place where he can successfully raise chicks now. We watched him struggle for many years before he was able to take over the territory he has now. Happy for you FR!

CA & Y2’s chick started running when we motored over to check on it but then when its parents took off and flew to the breakwater it flew with them. Fledged! Yay!

There weren’t any other pairs to check so we headed back to the boat ramp. I think Kyle and Joann had a great time! The next auction is in November so remember to bid on an oystercatcher experience!