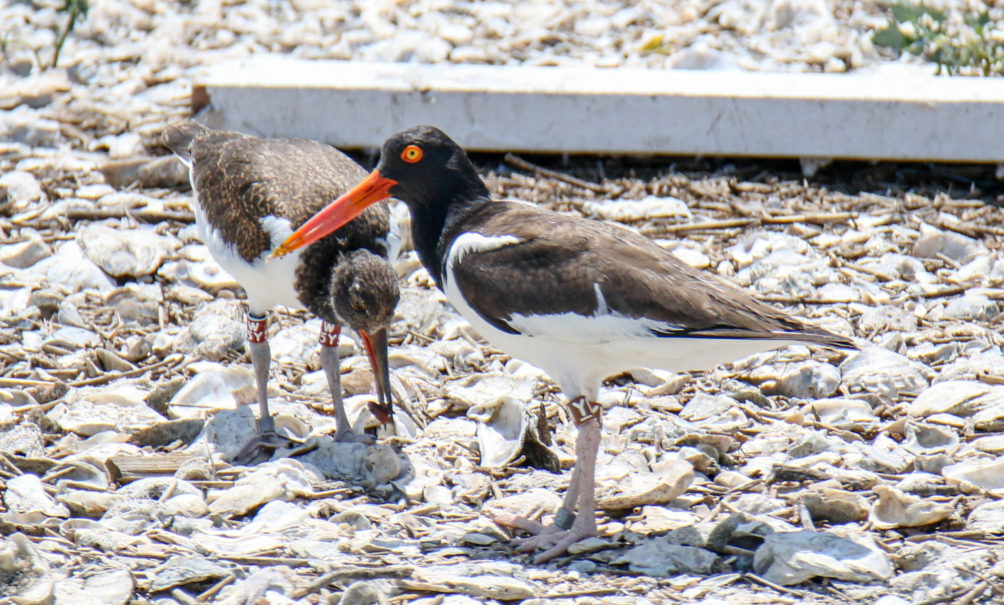 This week Alan and I moved our survey to Wednesday because of my schedule and the weather. The wind is back. Oh joy. A little wind is a good thing but I’ve had enough of 18-20 mph please. I had thought we would not be able to make it to Swan Lake this week because the wind was predicted to be too strong but it was only 13 mph when we left the boat ramp so we headed that way.

20 & unbanded were still incubating three eggs but there was a Great Blue Heron standing next to LR & unbanded’s nest spot. The oystercatchers were not there and the egg was gone. Coincidence? Maybe. Maybe not. Alan pointed out that the initials for Great Blue Heron (GBH) also stand for grievous bodily harm. Appropriate in this case.

I wanted to see if we could find X3 & unbanded’s chick so instead of entering Swan Lake where we usually do, we headed down to the other end. Before entering the “lake” we scanned the shoreline but didn’t see the adults so we knew they were on the backside. We zoomed in and around the backside. The adults heard us coming and flew but I saw where they flew from so I pulled up at that spot and the chick was laying right there! I guess it didn’t have time to run and hide. Excellent. We banded it W9Y. 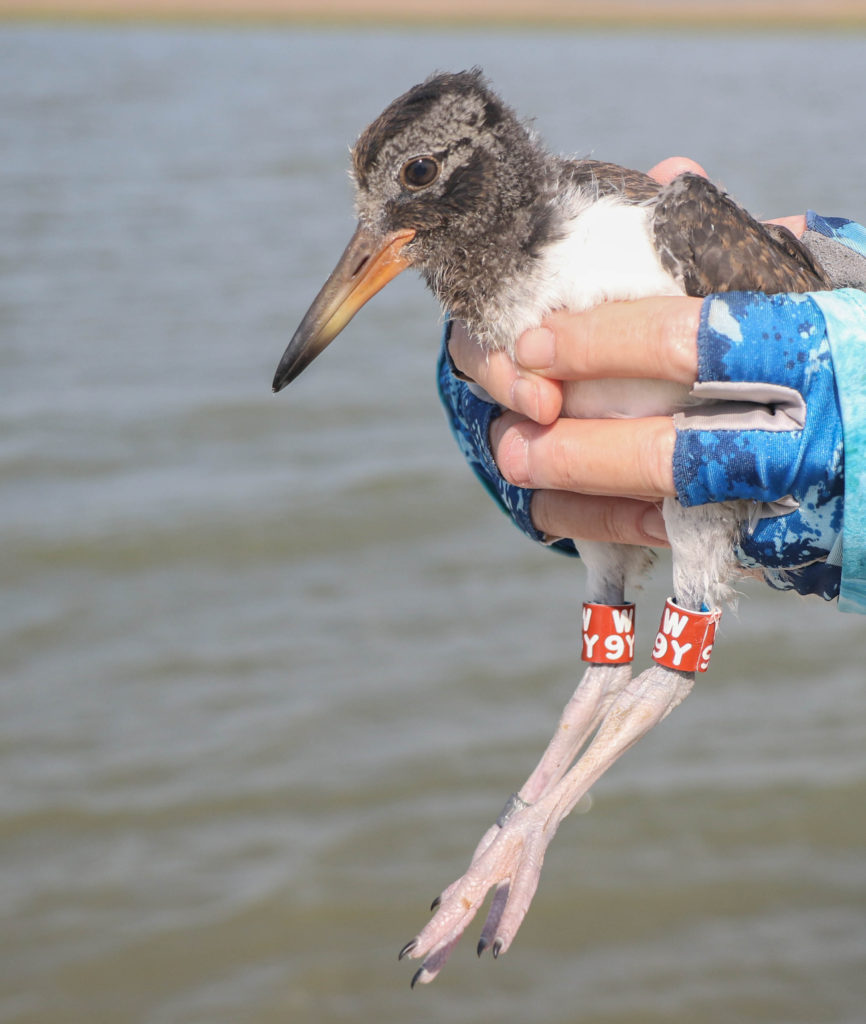 39 & unbanded weren’t home and neither was K7 & unbanded and their three chicks. I guess that means the chicks can fly well now! We found 39 & unbanded on the breakwater but not the K7 family. When we went to check on 11 & unbanded we didn’t see any adults and I feared the worst but as we motored slowly along the shoreline to see if they were hiding somewhere, 11 flew in and started scolding us. Then Alan spotted a chick run over the shell berm to hide. Yay! They still have at least one!

We headed back across the bay. The wind had picked up a little but it wasn’t too bad. At Struve Luci all was well. We saw E5A & unbanded’s two chicks for the first time in a long time. One of them flew from one part of the island to another part so at least that one is fledged. I’m not so sure about the other one because we saw one take a swim when they thought we were approaching (we didn’t and it swam back). 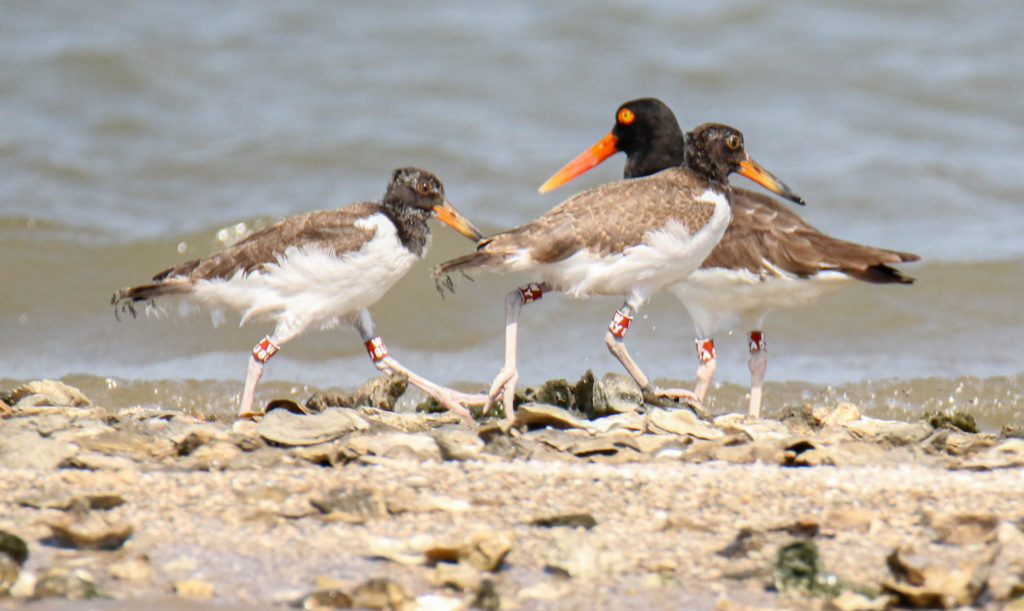 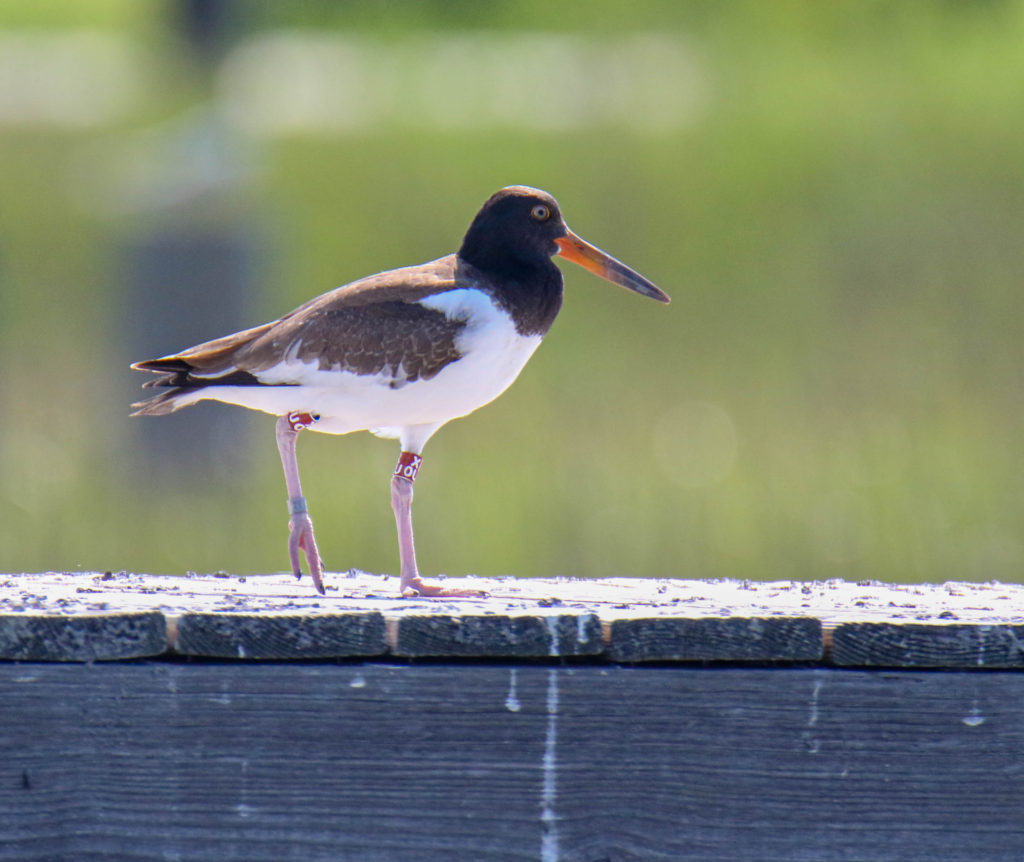 HM came and circled the boat and I didn’t see where he came from. No sign of his mate X7. I am suspicious they have a nest somewhere but I just don’t know where. I guess we’ll see if they turn up with chicks. L9 & unbanded were not home today so after we finished with the skimmers we headed to Jigsaw.

I needed to check LH & JX’s nest to see how many eggs they have now and that is the one right by the tern colony. Oh boy. Since I had to go up there anyway, I made it fast but also got the nest photos I forgot to take last week. 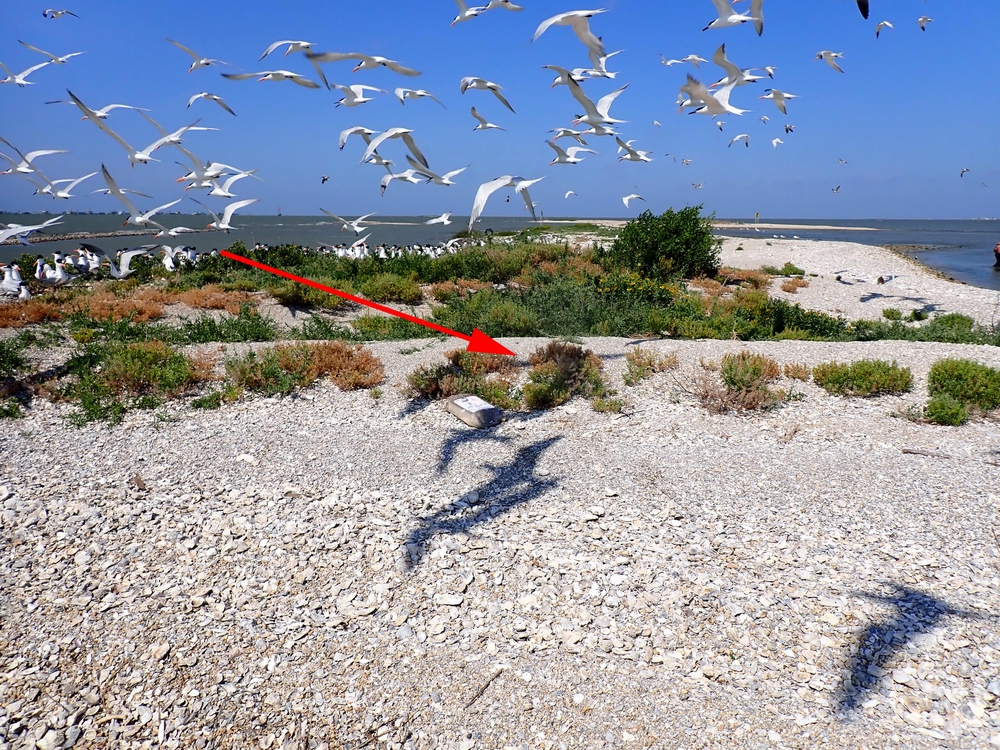 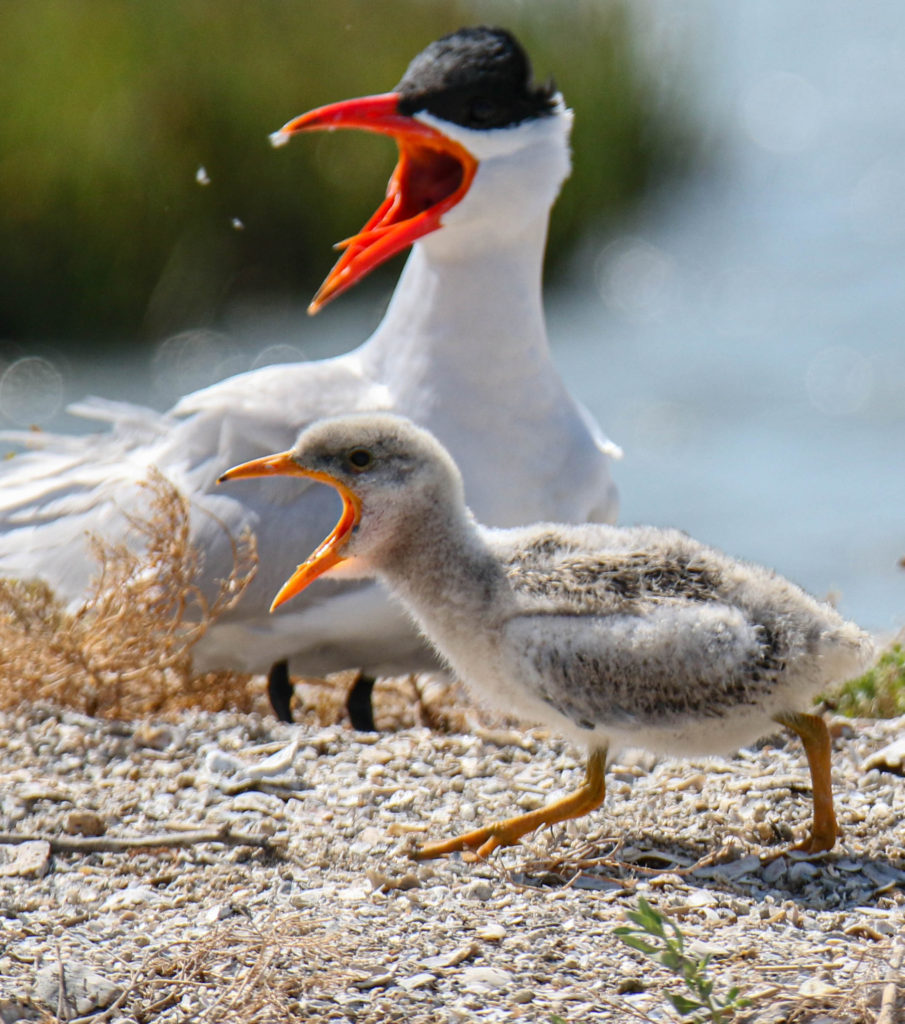 We looked for a new nest for X2 & W2Y but we couldn’t find one so we headed to the Galveston Island shoreline. YK & unbanded were snoozing along the shoreline. 16 was at 8 Mile Road alone. I don’t know if F9A left him or if was just off feeding somewhere. The reefs were all under water so if she was hungry she’d have to go somewhere else.

We found a flock of 13 on one of the docks along Sportsman Road but when we tried to photograph them they did this.

Hard to read bands that way! They headed towards 8 Mile Road and I didn’t want to back track so we went to check on A4A & unbanded and their chick. We couldn’t find them at first but then we spotted one of them sitting on the submerged oyster balls and the other one circled the boat and disappeared. I’ll take that as a sign that the chick is still alive but can’t fly yet.

Over on South Deer A1A & unbanded and their chick were standing proudly next to the Royal Terns. I think this chick is quite the looker. 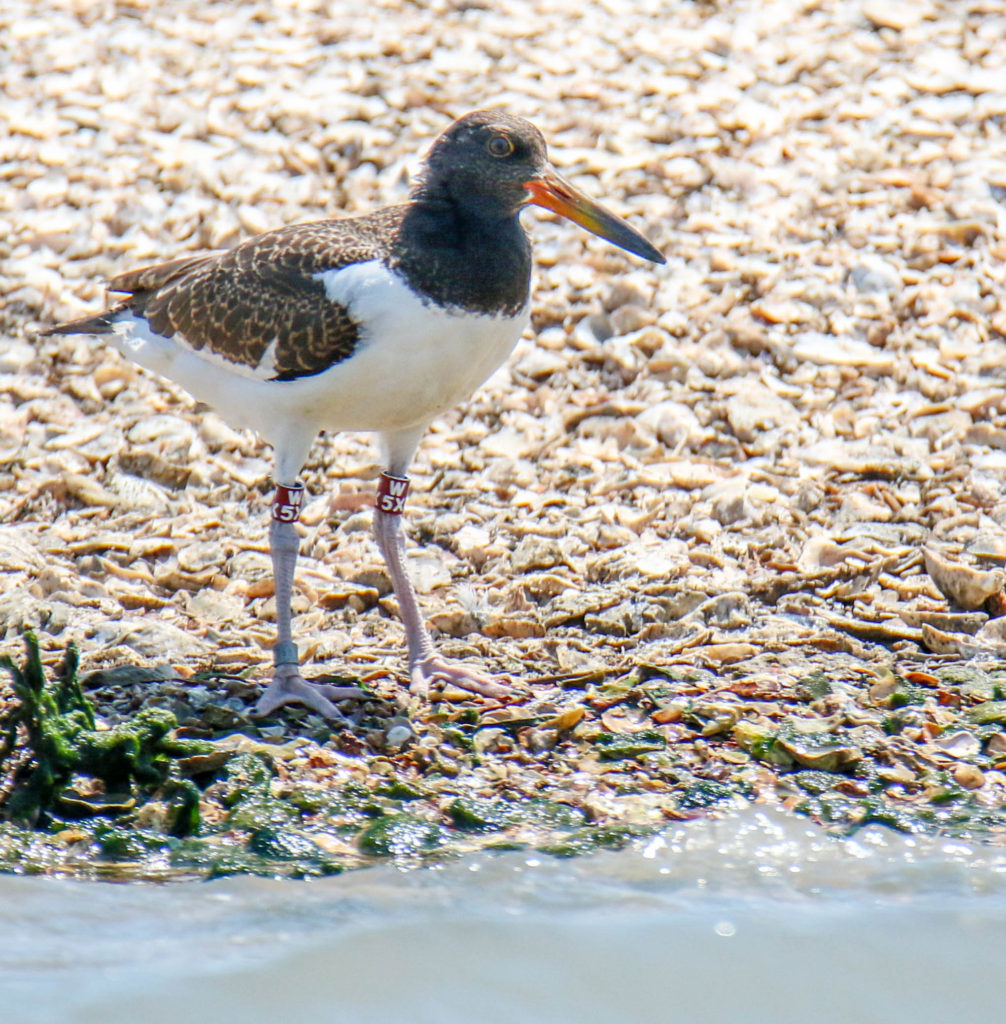 We noted that A5A & unbanded had a new one egg nest. It’s right in the middle of a bunch of gull nests! Dang. It doesn’t stand a chance with all those gulls around. I guess they just don’t have any better place. 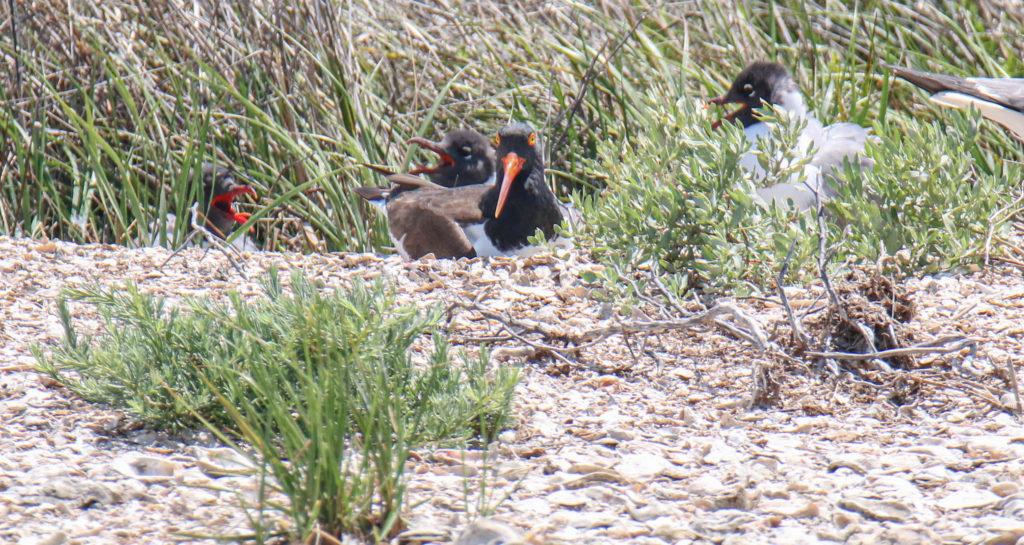 Y7 & unbanded have the same problem and they were just standing along the shoreline looking a bit forlorn. Ok maybe that was just my imagination but that’s how I’d feel if I was them!

F1A & E2A were in their territory and F1A was drooping a wing. 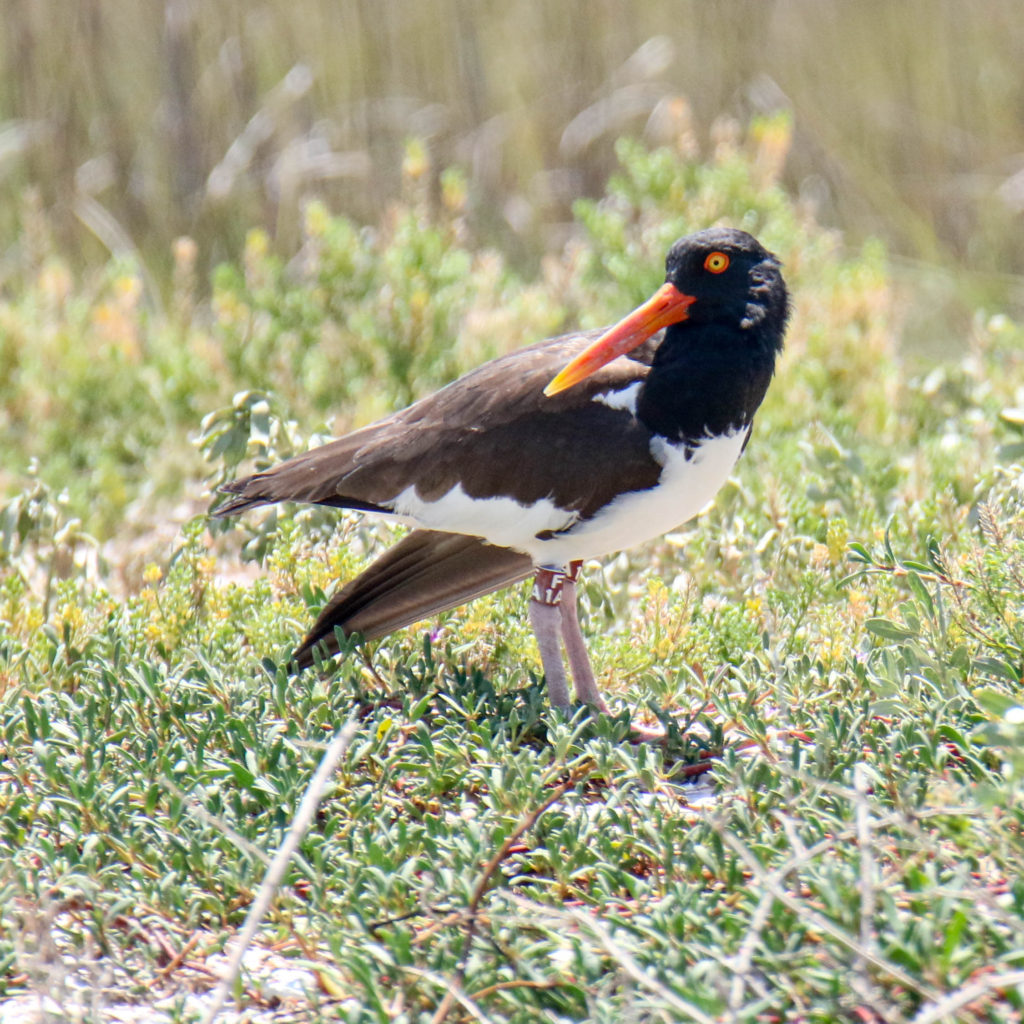 I was worried it was injured but when we moved in for a closer look it tucked it back up and they flew. Phew! We headed over to North Deer. I was getting tired and it was getting windier and windier so I wasn’t really in the mood to discover that E8A & unbanded had a new nest tucked way back where it is often to shallow to take the boat. Fortunately, the tide was high enough that we could get close so I didn’t have to trudge through a bunch of mud to get to it. Two eggs. Also surrounded by nesting gulls. It just doesn’t pay for oystercatchers to try to nest this time of year. They need to do it before or after the gulls nest. That’s the key to success!

C1A and her chick made a run for it when we went to check on them so I figured that meant the chick couldn’t fly yet. Next week it will be able to though. We found J6 & UF on the North Deer jetty. Last year they tried to nest on there. Wonder if they will try that again?

When we got to YM & JH’s territory we saw that YM was at one end of the beach with one chick and JH was at the other end of the beach with the other chick? Did they just each take one or did they have a spat? Haha! Get it. They eat oysters and oysters make spat! Ok, ok, dumb joke. The chicks looked fine and should be fledged but we didn’t push them to see if they could fly. 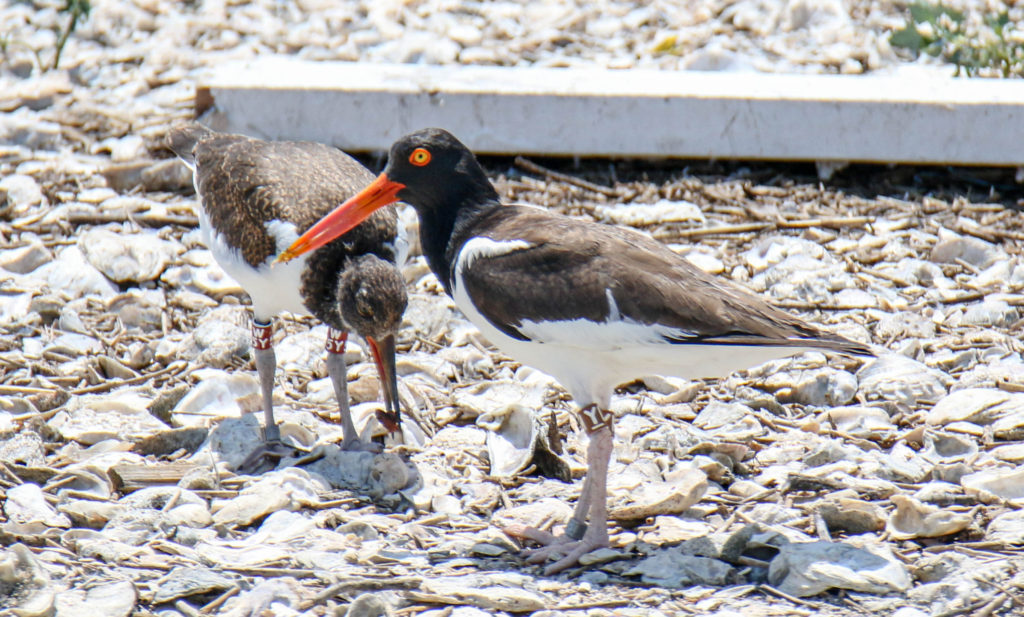 JJ & P4 were once again on their beach without their chick. Something definitely happened to it. What a shame. That was the only sad part of the day! JC was still incubating two eggs with W5 looking on from nearby. They may be able to incubate the eggs to hatching but the chicks will never survive with all the gulls around. We shall see.

FR & unbanded and their chick were up on their shell berm. When we approached to get photos, FR flew out and circled the boat and then rousted his chick into flying too. The chick made a circle around the boat too and then they both landed on the shell again. Like father like son/daughter I guess. FR usually calms down once his chick can fly but this year he seems more amped up than ever.

CA & Y2 and their chick were on the Tiki Spoil breakwater. The chick flew when we moved in for photos but after circling around it came back and landed between its parents and Alan was able to get a photo. So handsome. 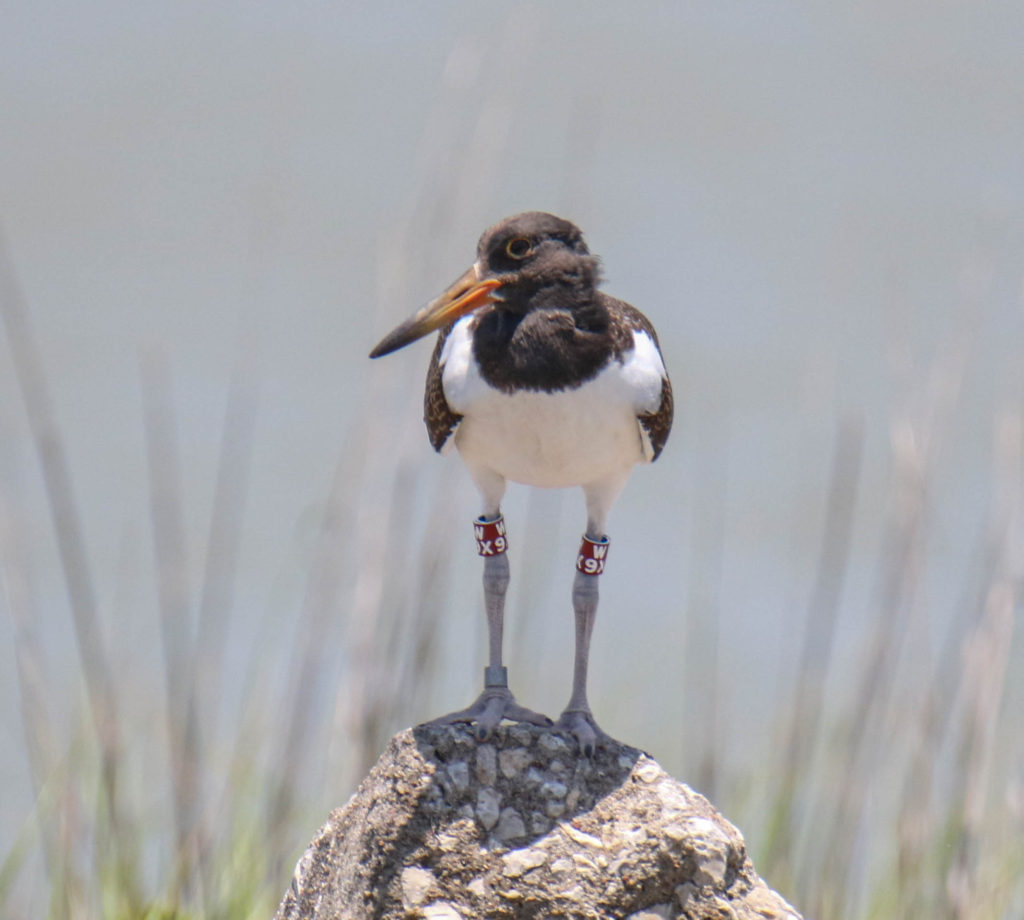 That was the end of the survey thankfully and we returned to boat ramp tired but satisfied with another round of oystercatcher checks.