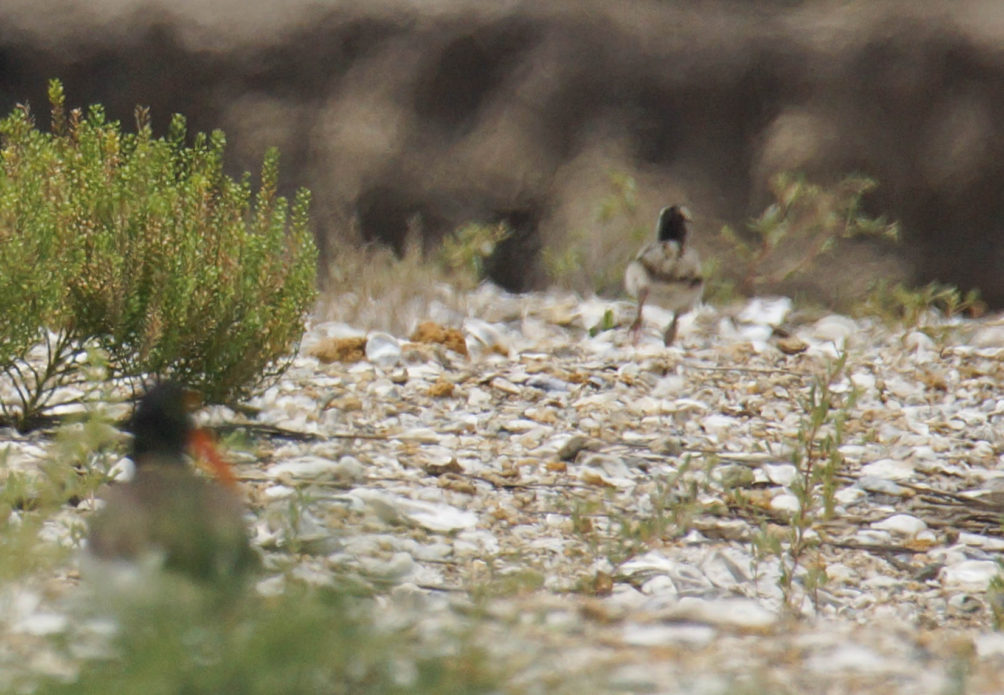 Alan and I surveyed the oystercatchers in West Galveston Bay on Thursday this week. For the first part of the survey, we were joined by Alexis Baldera, Audubon Texas Coastal Program Manager, and Stormy King, Texas Parks and Wildlife Department Assistant Commander Game Warden. We have been working with the TPWD game wardens to try to curb disturbance on nesting islands and Stormy wanted to see some of the islands so he could better understand the situation. We were happy to oblige!

Before we picked up Alexis and Stormy, Alan and I checked out Jigsaw. Both LH & JX and YE & unbanded’s nests had hatched. We didn’t see any chicks but the eggs were gone and the adults were acting very protective. It was quite hot out there with little wind (for a change) and the terns had all moved to the water’s edge to stay cool so I was able to check both these nests without causing much of a stir.

From a distance it looked like X2 & W2Y were still incubating their egg so we left them alone and went and picked up Alexis and Stormy.

We toured Struve Luci and showed Stormy the Black Skimmer colony there, the only one left in West Galveston Bay. This island is very close to the boat ramp on the Galveston Island side of the causeway which may be part of the problem with disturbance. The oystercatchers are all done there and all the chicks have gone off on their own. We saw a couple of the adult pairs but no chicks.

We took Stormy out to see Jigsaw and then moved on to North Deer and Marker 52. Alan and I checked the oystercatchers while Stormy continued to be amazed at the number of Brown Pelicans nesting on these islands. They have pretty much taken over. We didn’t see E8A & unbanded on their nest but the tide was too low to go and check the eggs. I suspect the gulls got them. C1A & unbanded’s chick still hasn’t fledged and I think something is wrong with it. It looks like the primary feathers on the wings aren’t growing in correctly. We will catch it next time and investigate.

YM & JH and family were not home but we found UF on the breakwater in the same spot again. She just might have a nest up there but with the tide so low we were unable to check it. On Marker 52, JJ & P4 were incubating their nest. W5 was alone on a reef and we didn’t see JC anywhere. I wondered if she might be on the other side of the island on a nest and I intended to check that when we came by later but I forgot. Next time.

We headed back to the boat ramp and dropped off Alexis and Stormy and then went back to Struve to count the Black Skimmers. There are a few skimmer chicks now so we have some added tasks that involve counting the number of adult skimmers coming and going for an hour. 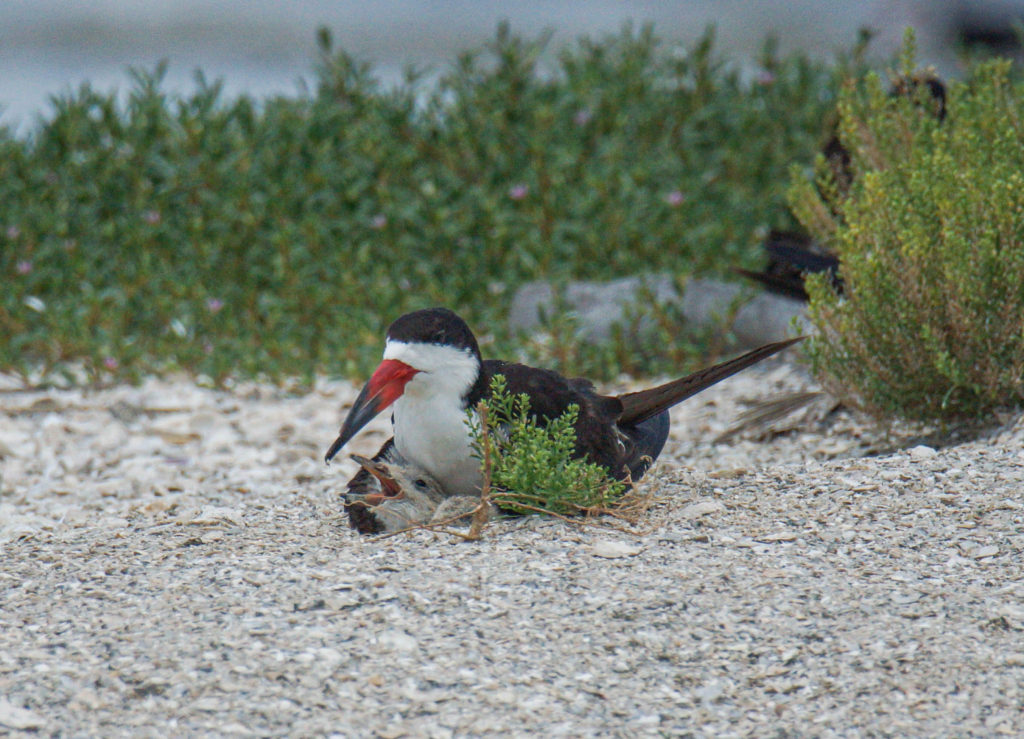 On this hot day, they were coming and going quite a bit just to stay cool! These counts are intended to help us determine feeding rates for the chicks so they will become more useful over time as there are more and more chicks.

Once we were done there, we headed up to Swan Lake. 20 & unbanded were on the shoreline with three small chicks! Yay! I hope they can keep them alive and safe from the coyotes. That’s about the only thing that can happen to them where they are. They have a nice high island that won’t get overwashed but its very close to the mainland and a coyote could easily make its way out there. There aren’t any other birds nesting there though so hopefully a single pair of oystercatchers won’t interest any roaming mammals. The chicks ran when they saw us looking at them from the boat and Alan managed to snap a photo of one of them making a break for it. 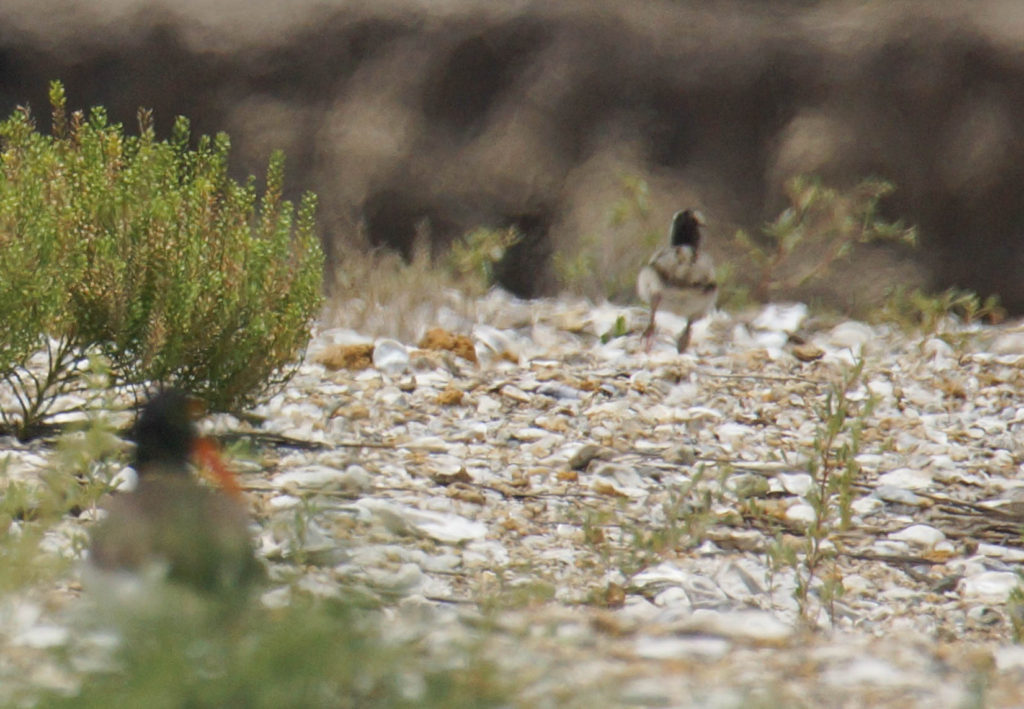 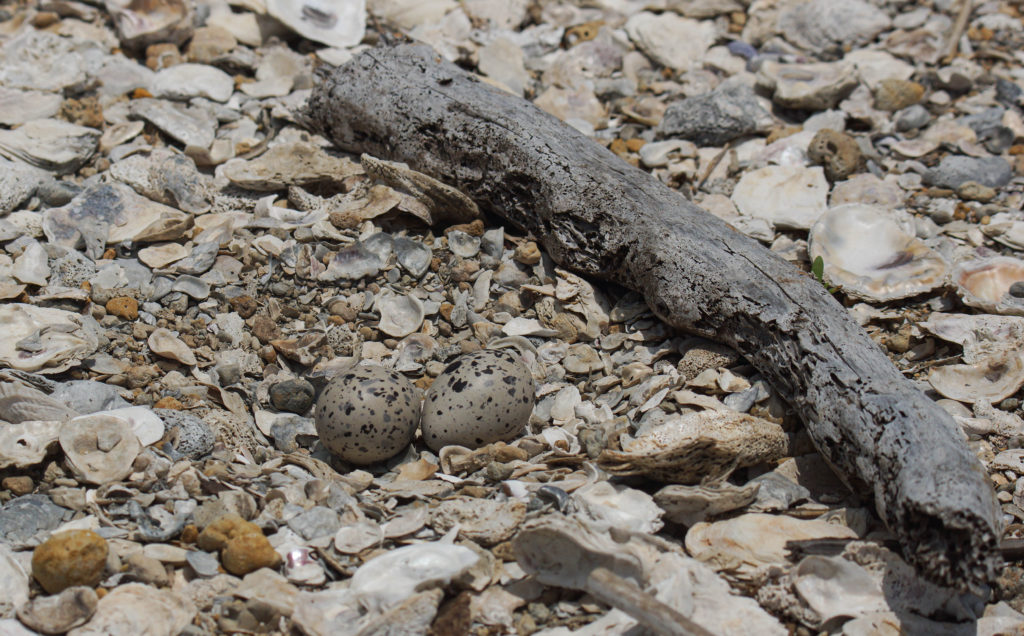 When we got into Swan Lake, we found 11 & unbanded on the breakwater and I feared the worst but when we headed over to where they have been keeping their chicks, one of the adults flew alongside the boat the entire way and then landed on the shell bank and started frantically calling! I guess they haven’t quite forgiven us for catching their chicks and banding them last week. The other adult flew in too and they were both vigilantly watching us so I guess the chicks were hiding there somewhere. Hopefully they’ll be fledged next week.

K7 was on his island without any of his three chicks. Perhaps his mate was off roaming around with them. When we approached X3 & unbanded’s island we saw X3 standing with the chick. As we got closer, both the adult and the chick flew in a big circle out over the bay and landed on a mudbank nearby. 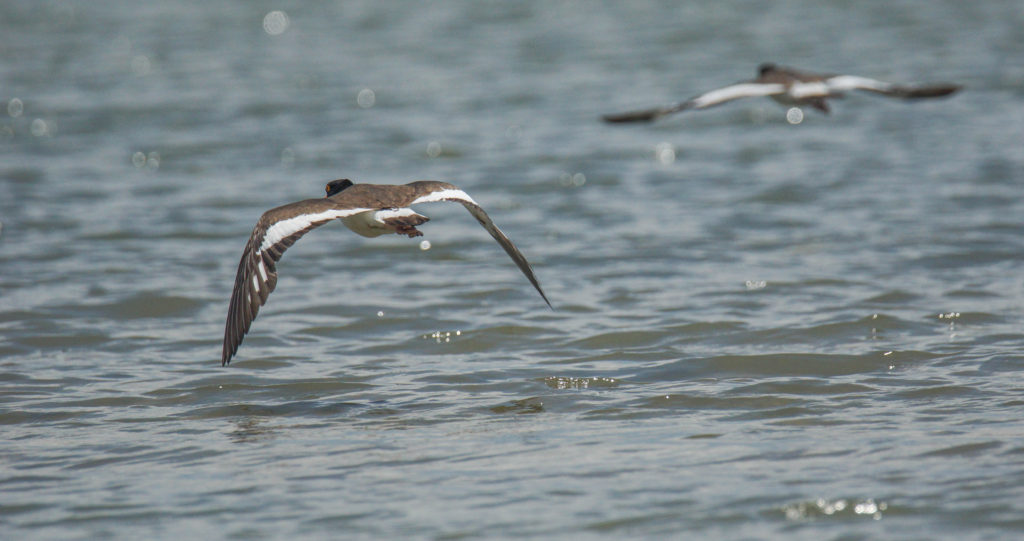 That chick was having nothing to do with us now that is can fly! Yay! Another one fledged. 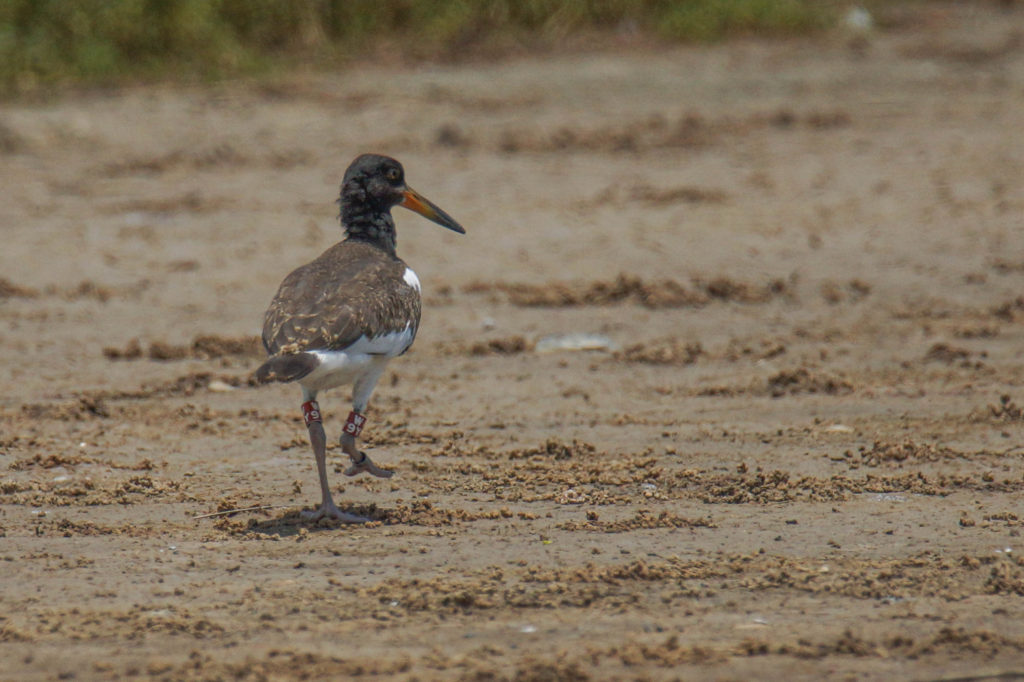 We headed back to West Galveston Bay and checked the docks along Sportsman Road. 16 & F9A were at 8 Mile Road with a few youngsters and we only found one oystercatcher on the docks.

A1A & unbanded were on the Gangs Bayou breakwater with their chick again.

We found A4A near where her nest had been with her chick snoozing nearby. We had a heck of a time getting it to stand up so we could verify the bands. 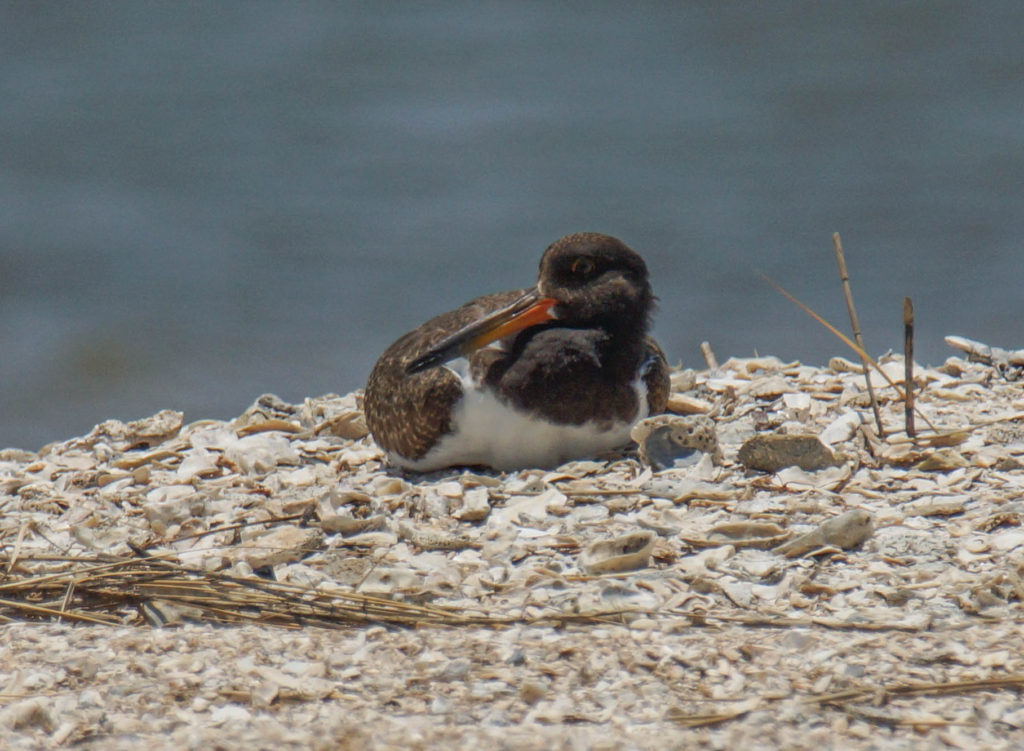 We headed over to South Deer and checked on A5A & unbanded. They appeared to still be incubating their nest so we left them to it. Y7’s mate was on a reef but Y7 wasn’t present that we could see.

We got a surprise when we got to F1A & E2A. Last week they were hanging out on a shell bank behind some spartina and this week they were there again. They’ve already fledged a chick this year though we haven’t seen it in a while. Despite that, they were acting like they had a nest so I went to check and found one egg. What the heck? It is most unusual for a pair to lay a new nest when they already fledged a chick. Something must have happened to their chick though and now they are trying again. 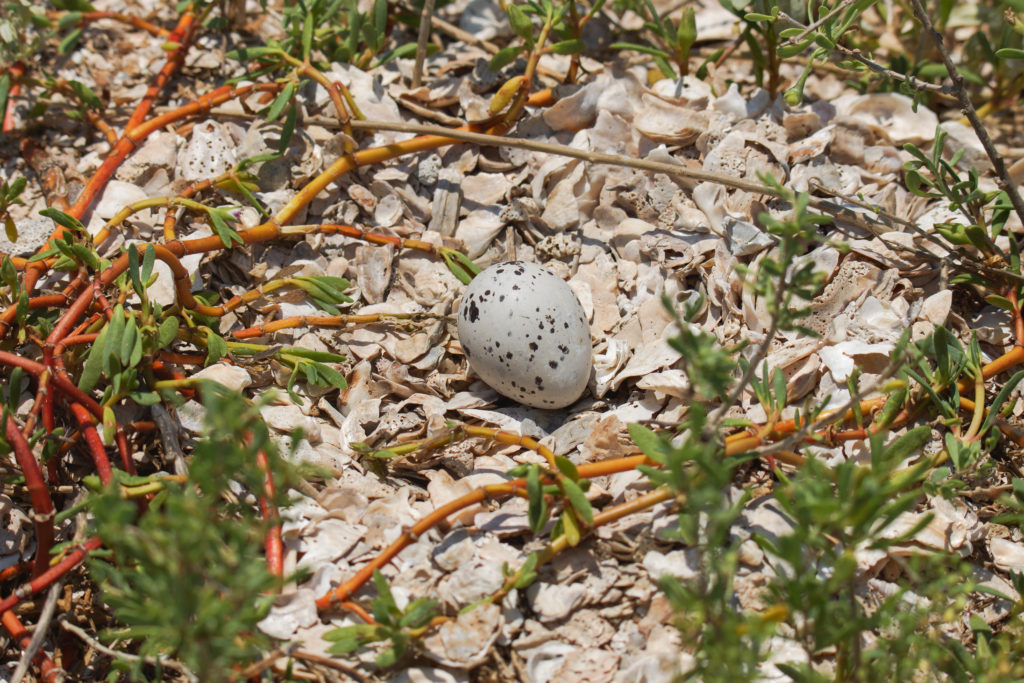 The boat was getting low on gas and we’d already checked most of the other pairs when we were showing Alexis and Stormy around so we made a quick pass through Jones Bay where we found FR & unbanded with their chick on a reef. 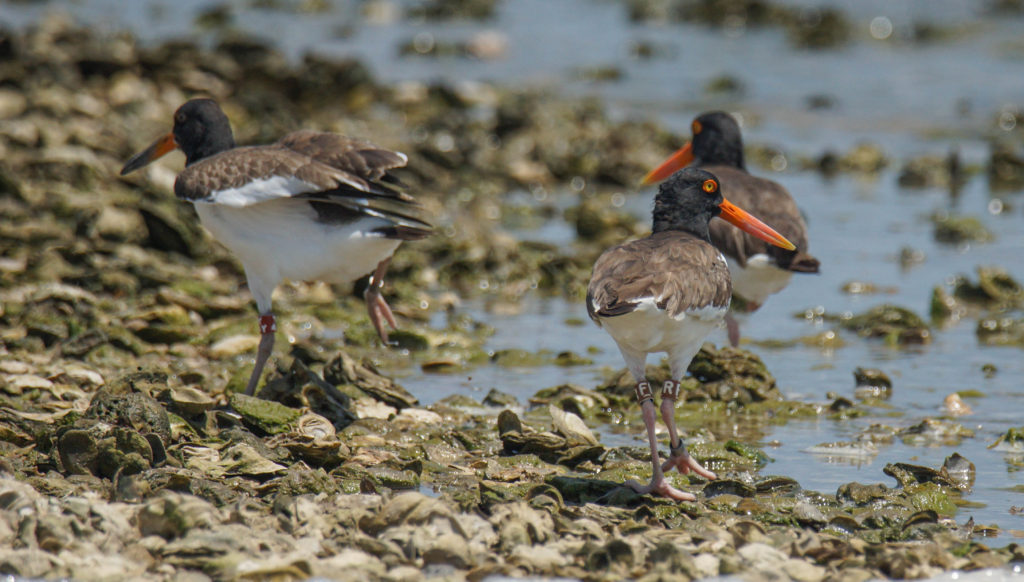 We headed back to the boat ramp very ready to get out of the heat. I know I complain about the wind a lot but we do need a little wind to keep us cool!

Note: There may not be a blog next week as I am taking a short vacation with my sister in the Georgia mountains on Thursday and Friday and then driving with her to Texas because she is moving here. Woohoo!