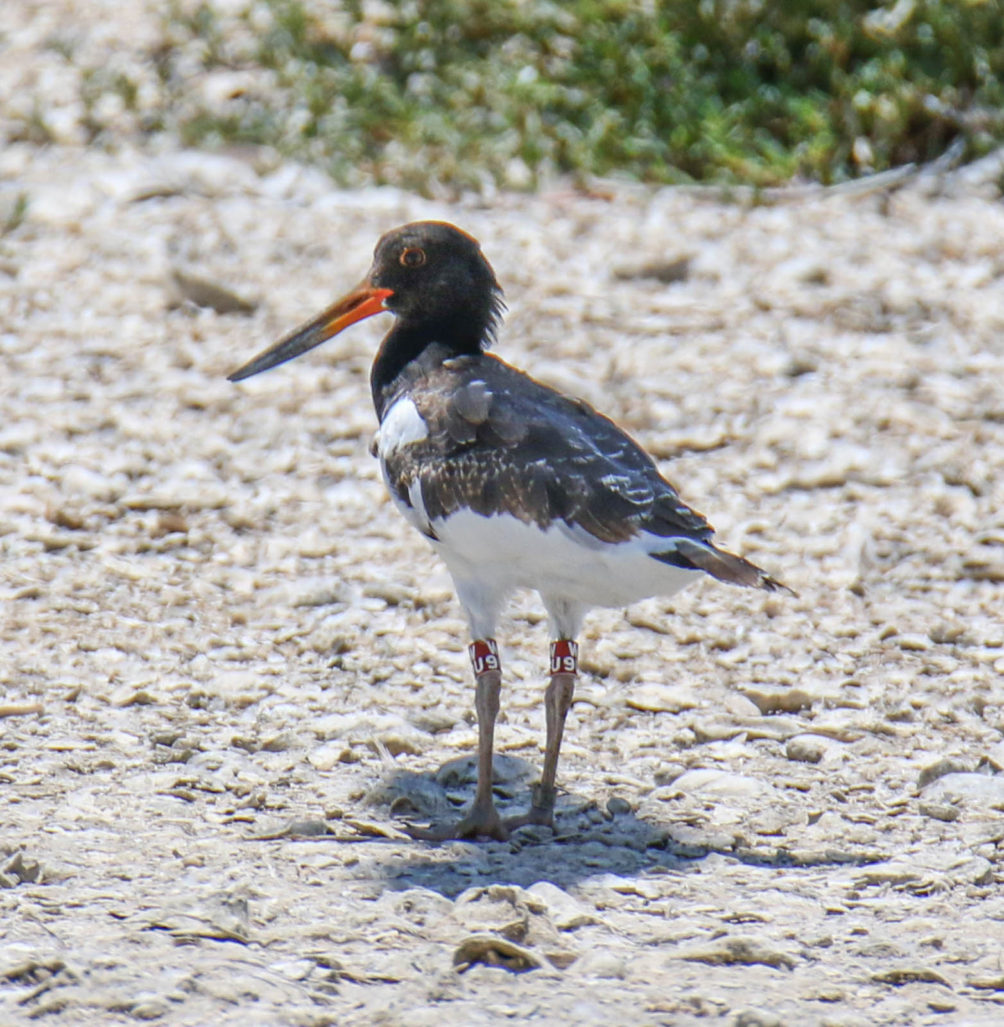 Alan and I headed out to West Galveston Bay with Elizabeth and Elisha Hehir to help us with the skimmer counts. We had to make a quick stop at Alan’s house to pick up an extra pair of binoculars so we checked on the oystercatchers in Jones Bay while we were there.

W5 & JC were incubating the one egg nest that we found last week. While we were watching them, E4A & unbanded flew in from parts unknown and landed right on the shore next to W5 & JC. I figured a battle was going to ensue but they all just stood there looking at each other. Maybe they were more concerned about us than the intruders.

Neither of the pairs with fledged chicks (FR & unbanded and CA & Y2) were home so we headed back past W5 & JC, where order had been restored and incubation had resumed, to check on JJ & P4. Alan had been out kayaking on Saturday and had seen them incubating but sadly today they were both out on a reef feeding far from the island. It was time for their nest to hatch and I suspect once it did, the gulls and/or pelicans got the chicks. Dang!

We had more bad news when we discovered J6 & UF on their island. Last week we found they had a nest on the North Deer breakwater with two eggs, but if they were both on the island, the gulls must have gotten their eggs too. This time of year, there’s just no break from the relentless hunger of the gulls.

We headed over to Struve to get our work done with the skimmers since it takes a while. I videoed them and we counted chicks (49 now!) and then we did our hour observation counting those leaving to forage and those coming back from foraging. Elizabeth and Elisha were champs at that and I very much appreciated their help! We also downloaded the data from at least one of the transmitters that David put out a few weeks ago. And finally we checked the game cams to make sure they were working ok. I discovered the perils of checking those things when I looked at some of the photos when I got home! 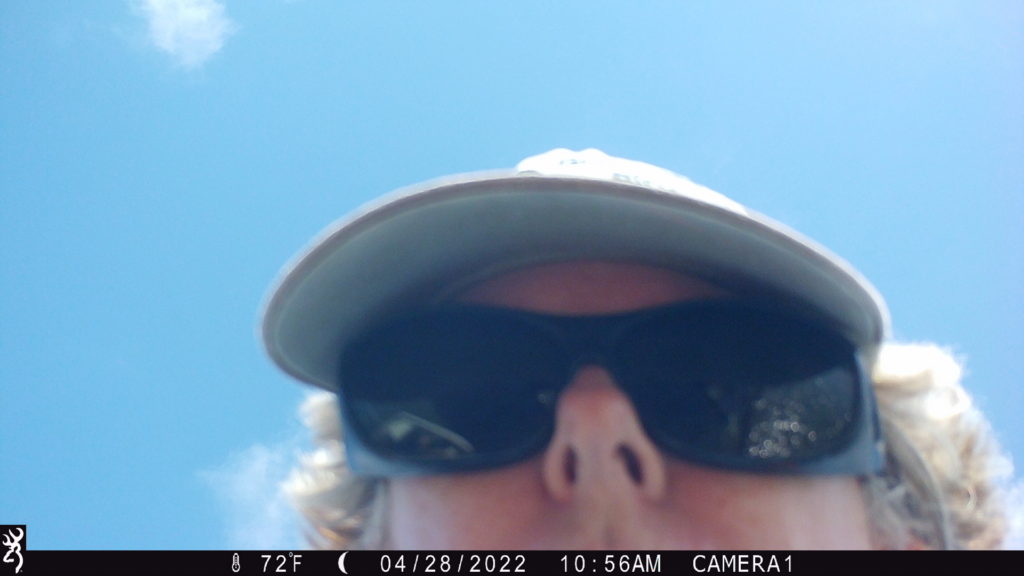 I think I need to put my hand over the lens or something.

We saw four of the five pairs of oystercatchers that belong on Struve but all the chicks have gone off on their own. We saw a couple of them later though.

We headed up towards Swan Lake over the smoothest water I’ve seen in a long time. What a delight. Of course, smooth water means no wind and no wind means its hot! The air conditioning was great while we were moving though.

20 was out on a reef with both chicks. Very nice! The unbanded mate flew in while we were taking photos. I guess they feel the chicks are big enough now to be out in the open. That’s a good sign.

Last week we discovered that LR & unbanded’s nest had failed and this week they didn’t appear to have laid a new one. U7Y was hanging out there and I’m surprised LR didn’t run it off but they seem to be moving towards the season where they all get along again!

In Swan Lake we confirmed what I had suspected for the last few weeks. Something happened to 11 & unbanded’s chicks. They should be way past fledging now and we haven’t seen them since we banded them. If they were ok, they’d be out in the open. 11 & unbanded were still scolding us though. Maybe a miracle will occur.

K7 & unbanded were hanging out on their island with no chicks. They sure kicked them out quickly. I guess when there are three of them it gets to be a bit much! X3 & her chick were on a breakwater but they flew to a reef when we approached for photos. That chick still doesn’t trust us!

We headed back to West Galveston Bay and went to Jigsaw where I was hoping we’d find good news and we did! It took a little sleuthing but we managed to get our eyes on LH & JX’s chick and YE & unbanded’s chick. 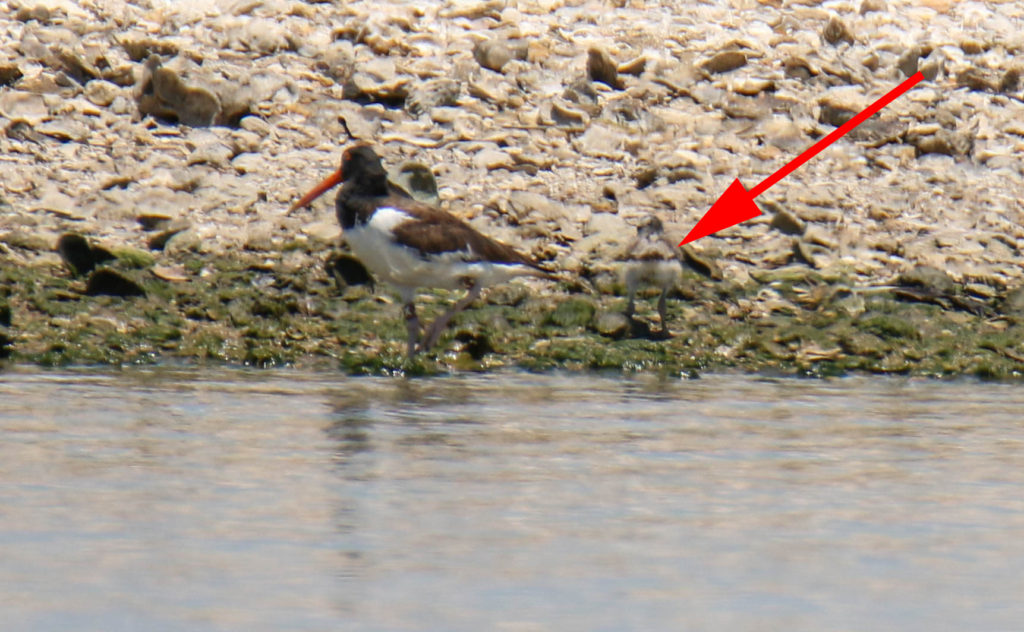 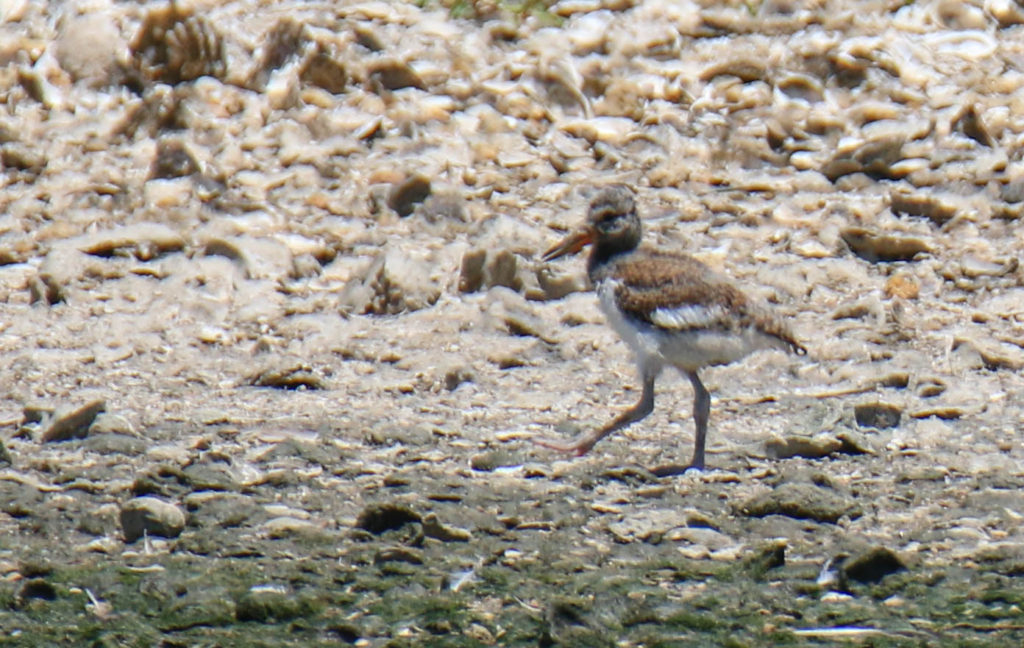 I think X2 & W2Y’s nest failed again though. This is their third try and every time they lay the egg right in the middle of the gulls. Will they never learn!

YK & unbanded and 16 & F9A were hanging out along the Galveston shoreline. At 8 Mile Road we found a single bird, X4Y. That is F1A & E2A’s chick from earlier this year and I had assumed it was dead since the adults laid a new nest. American Oystercatchers have never been documented as having two broods in a single nesting season. If their nest fails, then yes they’ll try again but if they fledge a chick, they don’t try again until the next year. F1A & E2A are one for the record books it seems. If they manage to fledge another chick from the new nest that will be something!

There weren’t any birds on the docks and nothing exciting was happening at Gangs Bayou so we checked Confederate Reef which was above water for the first time in a while. There we found X0U which is LT & JA’s chick from this year. 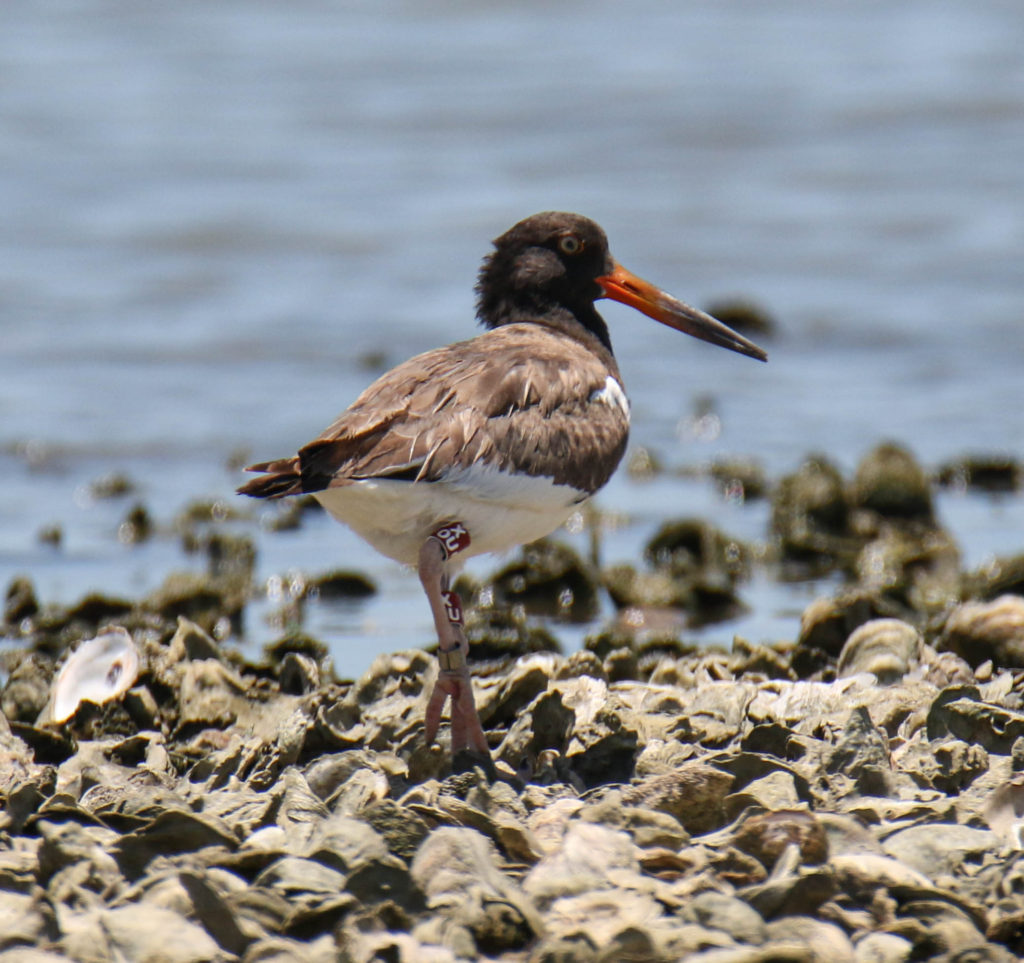 Looking good! On South Deer we were surprised but very happy to see that A5A & unbanded have managed to keep their chick alive amongst a huge number of gulls.

Seems they have a good hiding place for it. Another week and it will probably be safe from predation. That will be great! Y7 & unbanded weren’t home and F1A & E2A were still incubating that new one egg nest they laid. So weird! I was surprised to find A1A & unbanded and their chick on F1A & E2A’s reef. Alan pointed out that they probably couldn’t be seen amongst the gulls and were going undetected by F1A & E2A. Or maybe as I said earlier, they are all being friends again.

On North Deer we approached C1A & unbanded with some trepidation. Their chick is 70 days old now and as of last week it still couldn’t fly. Chicks usually fledge somewhere between 35 and 40 days so this little one was way behind schedule. It was standing with the adults on the shoreline so I inched the boat closer and closer to see if it would go hide or fly. After some hesitation, it took off and flew across the small bay to another part of the island. A cheer rang up from the boat! Way to go little guy! Phew. I thought something was wrong with it for sure. 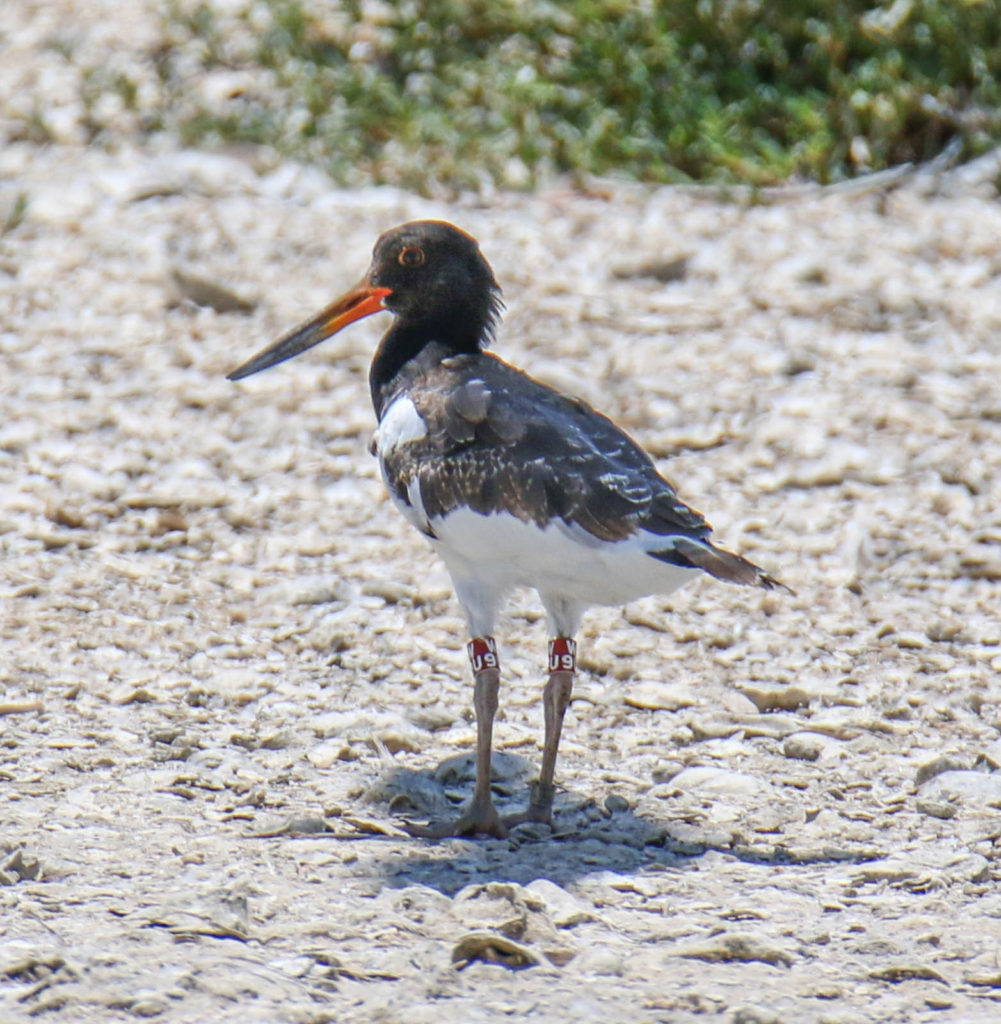 Since we’d already checked on the rest of the pairs in this area earlier we didn’t spend much time hanging around and headed back to the boat ramp.