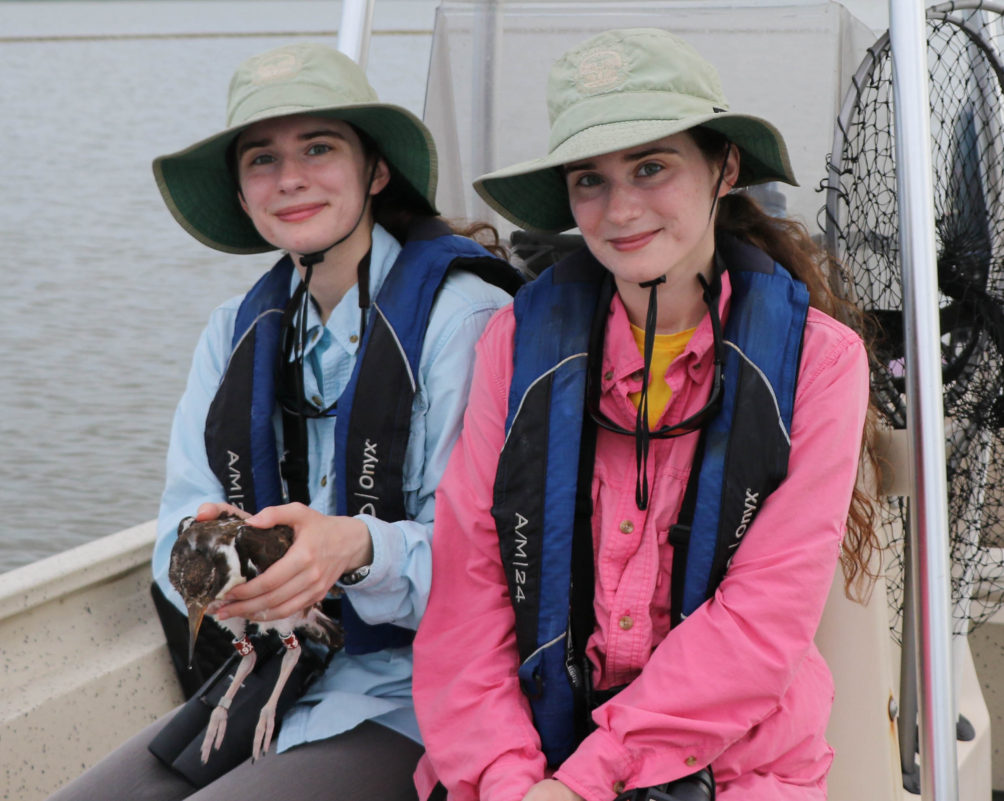 We had planned to go out and check the oystercatchers on June 30 but it rained that day (much needed!) and I had no flexibility to change to another day so we had to skip that week. This week Alan and I went on Wednesday. We were accompanied by Elizabeth and Elisha Hehir and Elena Duran. Elena is a graduate student at Texas A&M studying contaminants in waterbirds. She’s been taking blood and feathers from the skimmer chicks as we band them in both West Galveston and East Matagorda Bays. I hoped to band the skimmer chicks that couldn’t fly yet so she came along to get her samples. I had also arranged to meet up with Justin LeClair from the Coastal Bend Bays and Estuaries Program (CBBEP) so he could make sure we were getting the data off the skimmer transmitters correctly. And we also had some oystercatcher chicks to band so it was going to be quite a busy day!

We headed up towards Swan Lake first to band 20 & unbanded’s chicks. The last time we were out, they had two but we could only find one this week so something happened to the other one. The one that was left ran and ran and ran down the shoreline and I was huffing and puffing by the time I finally caught up to it and snagged it in a net just as it dove into the water. Give me a break chick! I’m too old for this! We banded it X9X. 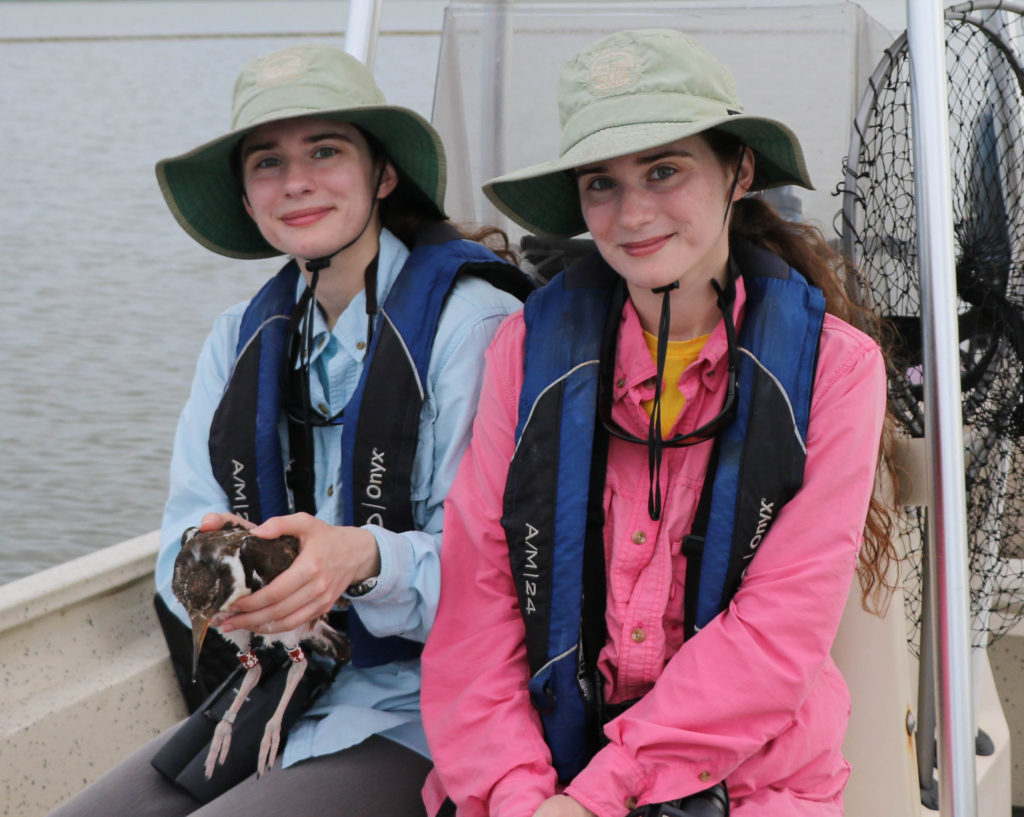 Then we headed back down to West Galveston Bay and started on the skimmer work. We circled the island several times, videoing the adults so I could count them, counting chicks and changing the batteries and the data cards in the game cameras. Just as we were done with that Justin texted that he was at the boat ramp so we went over and picked him up. We spent the next hour and a half moving the receiver around and trying to get data off the skimmer transmitters while also recording aggressive behaviors between the skimmers and other species. We managed to get data off two transmitters and possibly a third so that’s not too bad considering we only put four out there.

After we took Justin back to the boat ramp, we went back and tried to get some skimmer chicks to band. Unfortunately, most of them were fledged and there were only eight of them the right size. Last week was the week to do it and the rain really messed us up! It was 2:00 by the time we got done with the skimmer banding and we’d been out there in the sun and heat for 5 hours. Elisha wasn’t feeling well so we took her back to the boat ramp so she could cool off. Elizabeth stayed with her and since Elena had to drive back to College Station, she headed out too.

Alan and I went back to finish the oystercatcher checks. Since it was already so late, we only checked the pairs that had nests or unfledged chicks. W5 & JC were not incubating their nest and we didn’t see them anywhere so I suspect the gulls or pelicans got their egg or the nest hatched and the gulls got the chick. That island is overwhelmed with gulls and pelicans. The oystercatchers didn’t stand a chance.

We checked on C1A & unbanded and their chick. They were all fine and we saw the chick fly again so all is well there! On South Deer, it appeared that F1A & E2A’s nest had hatched. I didn’t find a chick but they were acting like they had one so we left them too it and went around the other side of the island to check on A5A & unbanded and their chick. They were there but the chick had a droopy wing. 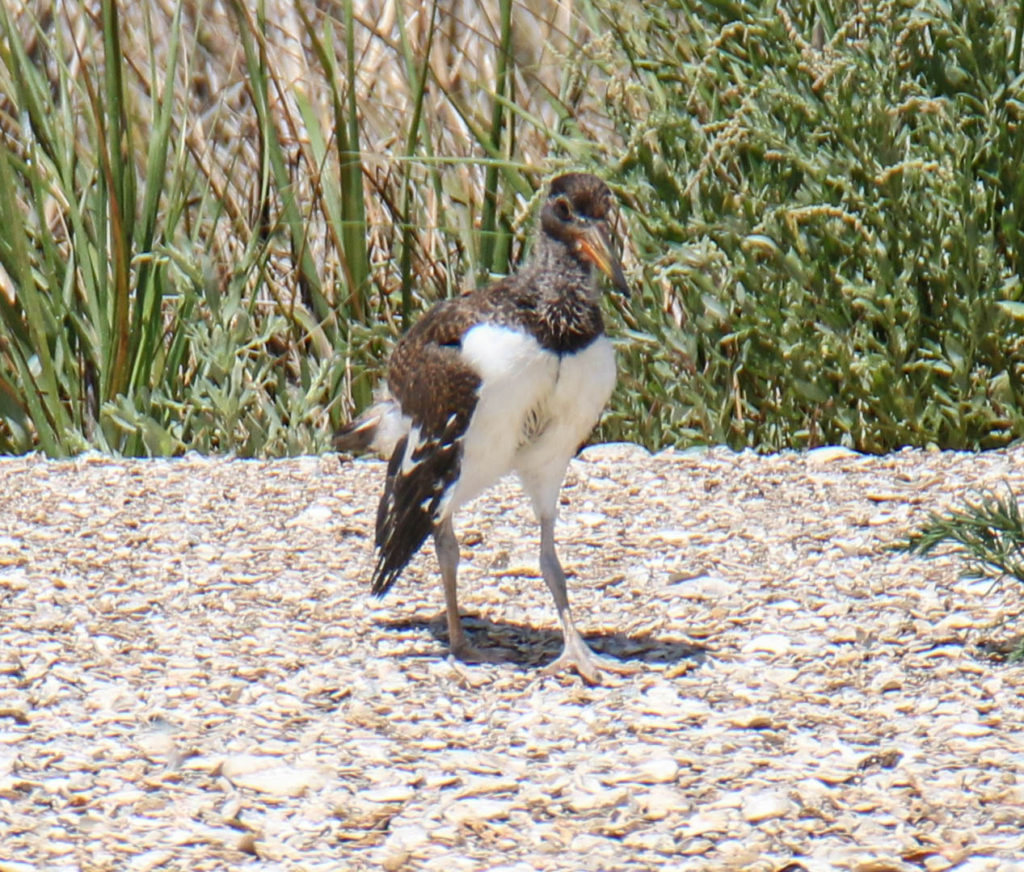 I sure hope its ok. I probably should have banded it but we were so late that I didn’t want to take the time. I thought based on the hatching date it wouldn’t be fledged next week but after looking at Alan’s photos I think it will so it may go unbanded!

Then we headed to Jigsaw to check on YE & unbanded and LH & JX. They both had chicks that needed to be banded. It was unclear what was happening with LH & JX but we saw YE & unbanded and their chick so I went to chase it down. Unfortunately, it hid and I couldn’t find it right away. Eventually I spotted it again and I was able to get it in the net. Meet X6X. 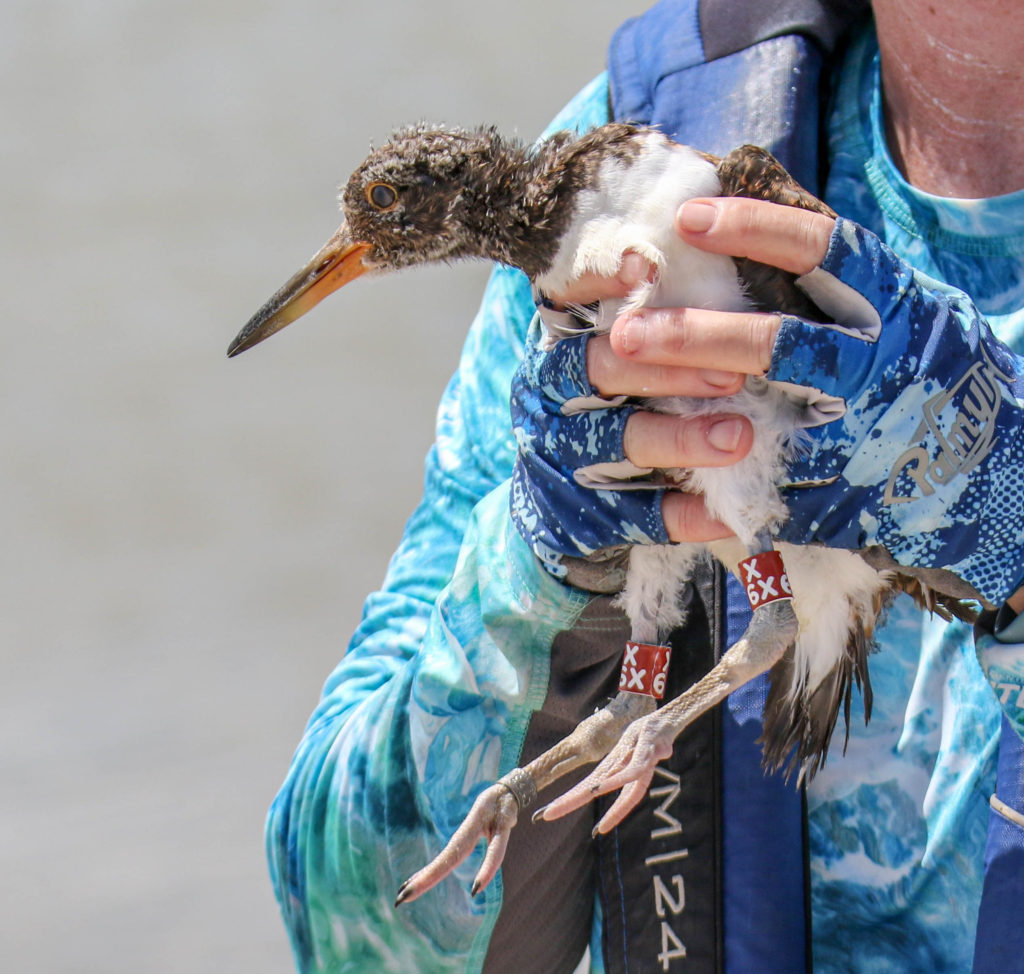 It was nearly 4:00 by then, much later than we are usually out in the field, and I had drunk all my water. Time to go in!