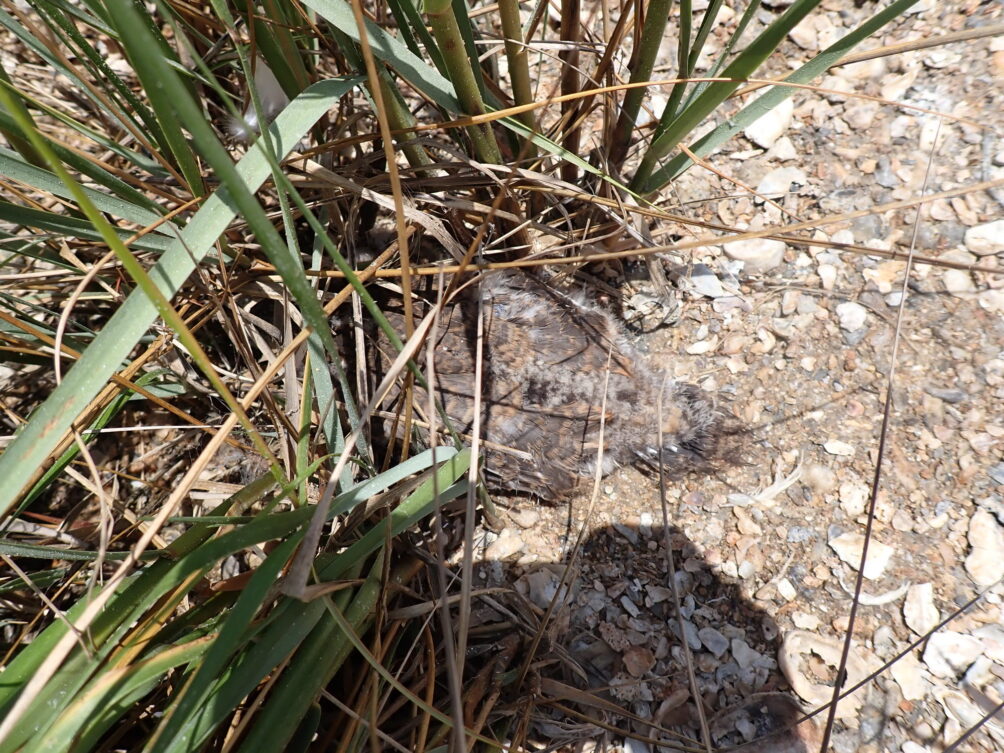 Things are rapidly coming to a close in the oystercatcher world. We went out on Thursday to check on everyone. First, we had to do the skimmers on Struve Luci though. We counted 72 fledged chicks there! That is fantastic. They are having a really great year and there are still 68 nests with eggs too. Yay skimmers! We also sighted nine birds banded as chicks in previous seasons that have come back to breed. That is also very exciting.

This pair seemed very interested in this stick. The male is presenting it to the female (see how much bigger he is than she is?). I have no idea why. They don’t build stick nests. Who knows what goes through the mind of a skimmer! 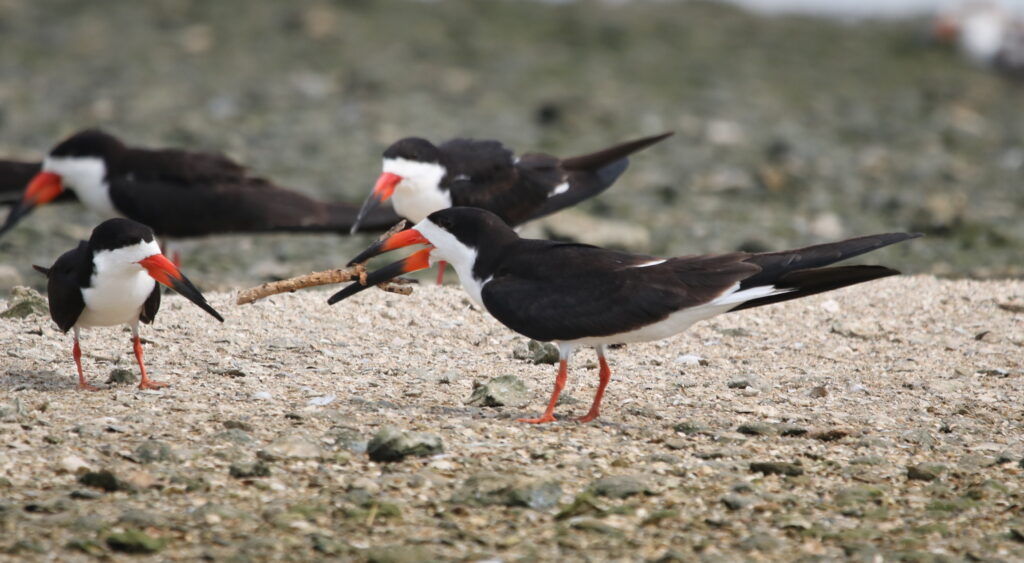 When we were done with the skimmers we went up to Swan Lake to check on the birds up there one last time. We found K7 & unbanded each with one of their chicks from this year. I don’t know where the third one was but likely off on its own somewhere. 11 & unbanded were still proudly showing off their offspring too. 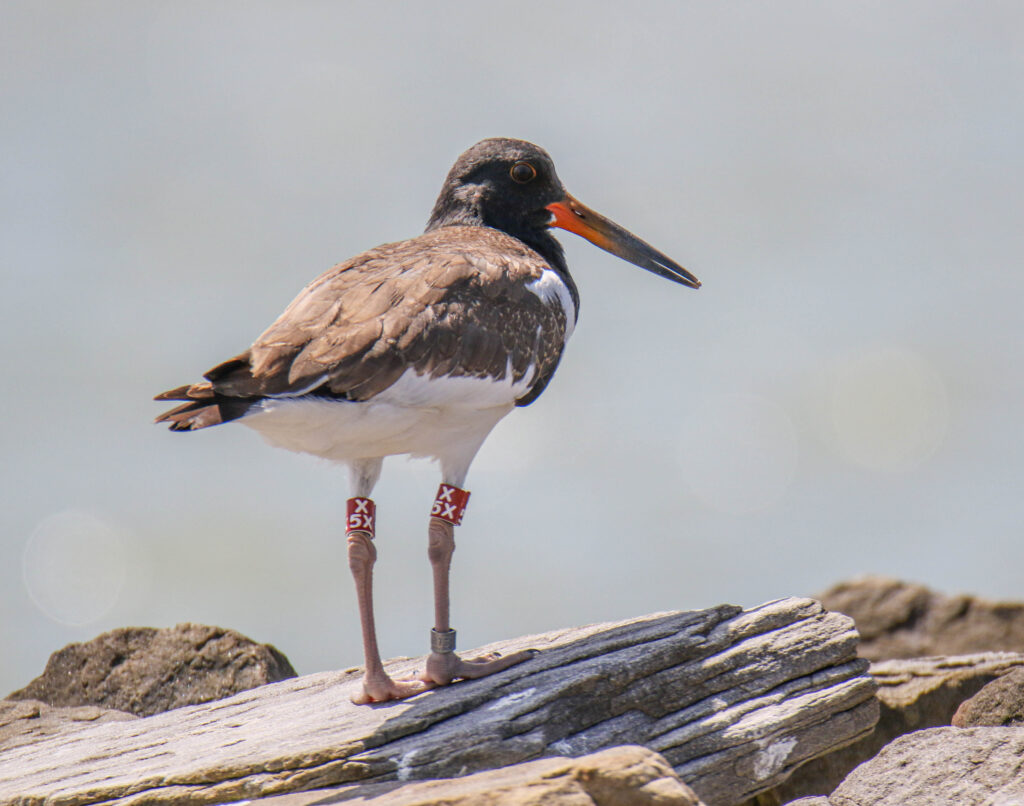 So good to see the young birds fly! We did not find X3 & unbanded and their chick. They like to hang out on the Texas City Dike so they might have been there. On the way back across the bay we found 20 & unbanded on the breakwater just east of Virginia Point but we didn’t see their chick. Oh no! I thought maybe it was hiding behind the rocks and sure enough when we got close enough it took off from its hiding place and we saw it fly away. Nice!

Back in West Galveston Bay we checked on YE & unbanded and their chick on Jigsaw. They were on the backside on a reef and when I made a move to get off the boat in the chick’s general vicinity, it took off and flew to another part of the island. Yay! Another one fledged. So great to see that. YE’s mate appears to be having a bit of a bad hair day. 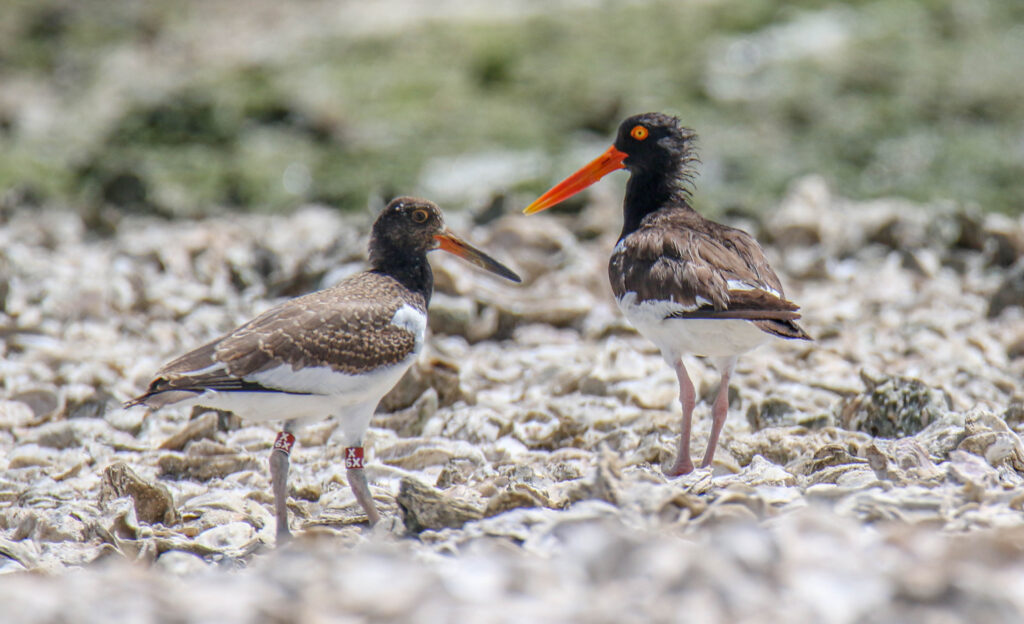 There weren’t any birds at 8 Mile Road or on the docks and we found only one adult and one chick at Gangs Bayou so we checked Confederate Reef. Eight birds there, mostly chicks, but A4A was there with them. No sign of 16 & F9A.

On South Deer, A5A & unbanded were with their chick on the shoreline. When I pointed the boat in their direction and waved my arms, the chick took off! Yet another one fledged! Woohoo! 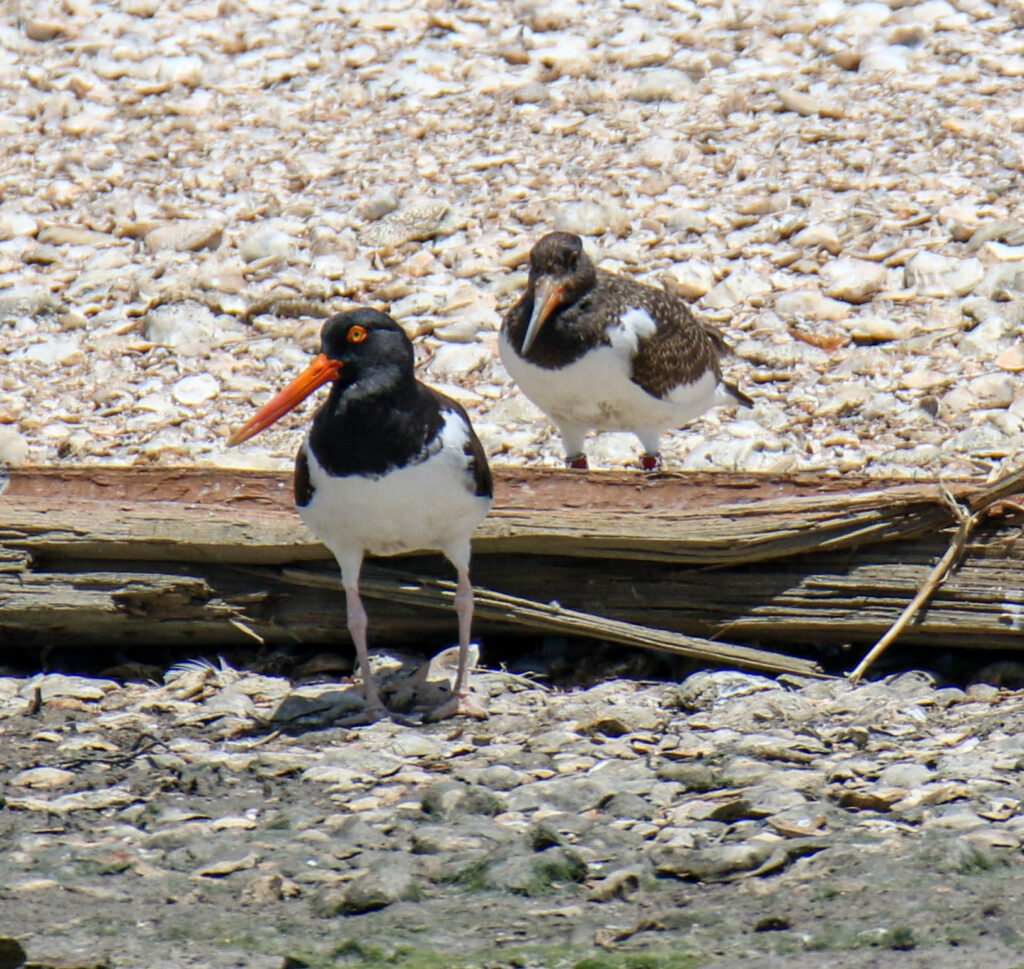 We went to see the baby terns in A1A & unbanded’s territory but they are mostly grown up now and so not nearly as cute as they used to be. Y7 & unbanded weren’t home so we proceeded to check on F1A & E2A.

Theirs is an interesting story. They fledged a chick in mid-April and then in early June we discovered they had a new nest. Oystercatchers are not double brooded so if they lay a new nest after fledging a chick it means something happened to their chick while it was learning to fly and they want to try again to raise a chick that survives. F1A & E2A’s second nest hatched in early July and we saw the chick from that nest. Here it is hiding in the spartina. 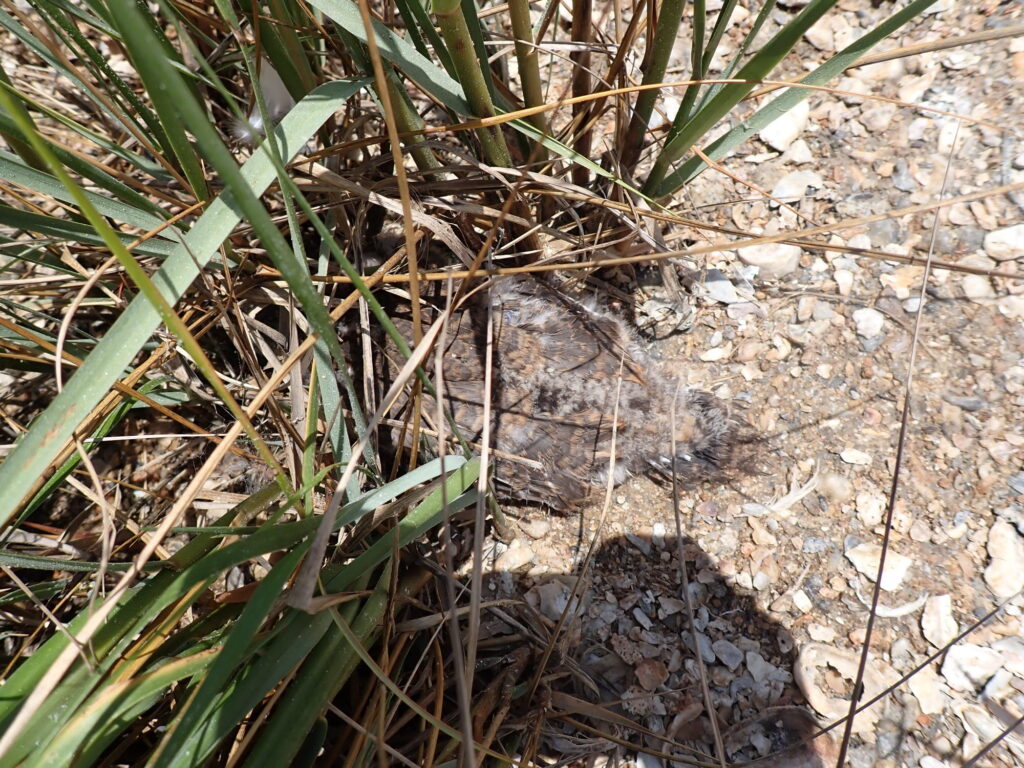 But we also saw their mid-April chick on Confederate Reef alive and well. This is news people! There has never been a case of double brooding documented for American Oystercatchers. They just don’t do it! If they fledge a chick and it lives through learning to fly, they are done for the year. It’s going to be very interesting to document this second chick fledging. They also only laid one egg in each nest! Weird.

We headed over towards North Deer and on the way we found JH and her two chicks on a reef. We haven’t seen JH or her mate YM in their territory in quite a while so it was good to see one of them with their chicks.

Nobody was home on North Deer, likely because of the mass of young gulls and pelicans hanging out there. It was standing room only along that shoreline! Most of the Marker 52 birds weren’t home either but we found E4A on a reef along the GIWW and then again on FR’s island. Better watch out E4A. FR’s not one to mess around with!

At this point F1A & E2A’s unfledged chick is the only one left. There are no nests and no other chicks. The season’s almost over!