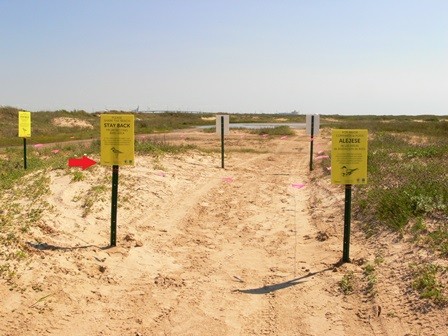 Over the last two weeks we finished putting up the symbolic fencing and area closures at Matagorda Bay Nature Park. We closed off the remaining side roads to provide protection for birds nesting around the ephemeral wetlands and among the dunes. There are now 97 signs at the nature park thanks to the muscle power of several volunteers! A Least Tern colony has established across an expansive area located in the back dunes. Pictured below is an incubating adult and nest. 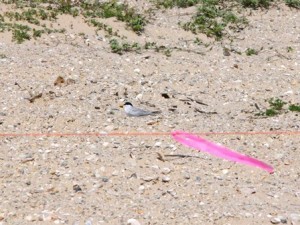 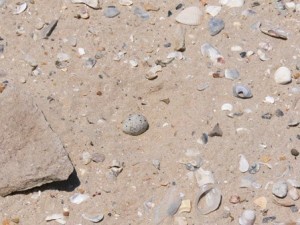 As of now, the colony consists of 50 Least Terns. Besides their Least Tern neighbors, the Wilson’s Plovers are becoming acquainted with 2 Common Nighthawk pairs nesting in the back dunes. 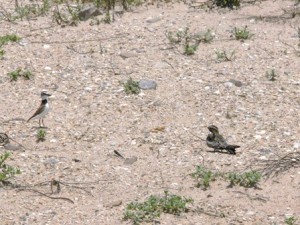 Since the last blog, more Wilson Plover pairs have moved into the area and begun nesting at the Matagorda Bay Nature Park. Sue and I were excited to find 4 new nests this past week. There are approximately 20 Wilson’s Plover pairs and 11 nests at the nature park. With new nests, meant more box trap opportunities. We captured 4 incubating females, each in less than 5 minutes! Additionally, we managed to capture another male at the nature park using noose carpets and a chick playback call. There are now 10 individuals banded at the nature park. 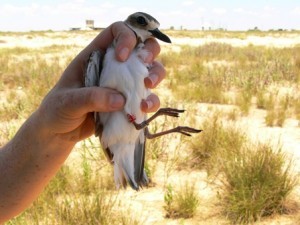 Bryan Beach has remained pretty quiet since the last flooding event. The single nest that remained unfortunately failed for an unknown reasons a week later. On a brighter note, I did find 2 new nests that are now approximately 2 weeks old. Both nests are also located in areas where human disturbance is frequently occurring. The pictures below show that both nests were nearly run over by trucks and ATVs driving through their habitat. 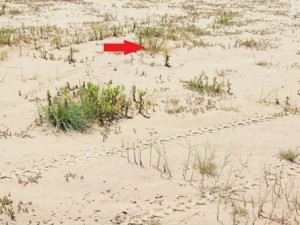 In an effort to protect the nests from vehicular traffic, I closed off the area around the nests. Although, the driving and partying will continue in these areas, I hope that people will respect the signs and not vandalize them. 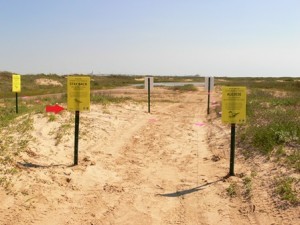 I began the colonial waterbird surveys at the Dow plant located in Freeport. For those of you who don’t know, Gulf Coast Bird Observatory has been monitoring this colony for several years. Thanks to the Dow employee escorts, I am visiting the colony once per week to count nesting Black Skimmers, Least Terns, and Gull-billed Terns. The Least Terns and Gull-billed Terns have begun nesting, but the Black Skimmers are still staging. Since my last visit, there were 53 Terns and 285 Black Skimmers. 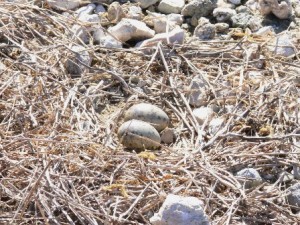 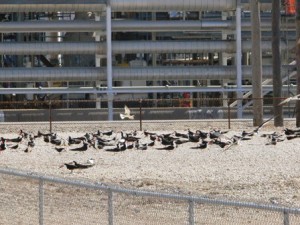