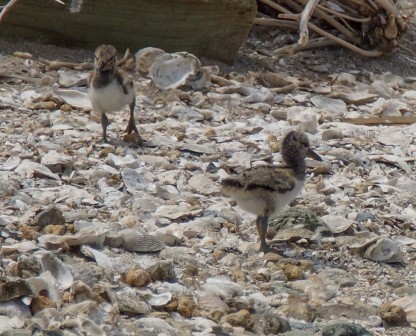 Tim Long, Alan Wilde, and I went out on the 16th to check on the oystercatchers and found some surprises. One piece of good news is that the tide is finally down to a reasonable level. It’s still higher than it’s supposed to be but at least it’s not two feet higher! Now it’s only one foot higher. That makes a big difference to the birds apparently as you’ll see. It also made a difference to our boating experience and Captain Tim’s skill at avoiding reefs was tested on numerous occasions. Fortunately the sun was out and we could see them all pretty well.

We started out in Jones Bay but there wasn’t much going on there. We found a fledged Caspian Tern chick though and Alan got some cool photos of its interesting plumage. 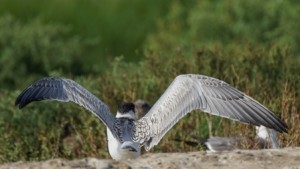 P3, unbanded and their chick LW were not on their island so I can only assume that since the tide was lower and their chick can fly, they took off for a good foraging area. Over on Marker 52 we found that 28 & AP’s nest had failed yet again. They have tried three times this year. I’m thinking they are worn out from the effort and won’t try again. H0 & JC were out foraging enjoying the lower tide. Down at Harbor Walk we found that ET & unbanded had a new nest with two eggs! Yeah. It was up high so hopefully won’t get overwashed by a boat wake. 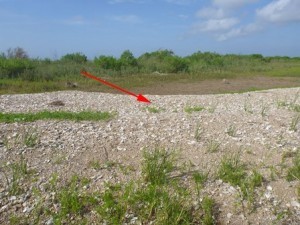 Back on the other end of Marker 52 we found JJ & P4 out foraging too. The birds are really enjoying the lower tide! Yes that is a reef in the photo. 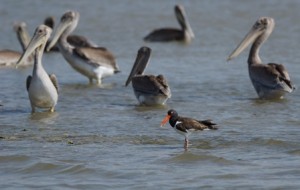 Over on North Deer, we discovered Y5 and an unbanded bird in what is JR & JH’s territory. What’s up with that? Have JR & JH abandoned their territory? Or were Y5 & unbanded just checking it out while the regular pair were off somewhere. Only time will tell.

We headed to South Deer and found more surprises. L4 & unbanded have a new nest with one egg but a couple of strange things were going on there. L4 was up by the nest guarding it and there were two unbanded birds together on a different part of the territory. When I went up to verify the nest, one of the unbanded birds flew over calling and landed next to L4. The other unbanded bird remained where it was. Strange. Is there a threesome going on there? It wouldn’t be the first time, but it would be the first time I’ve seen it. We will definitely keep an eye on that situation. The other strange thing is that I found a nest with a Laughing Gull egg and a Tricolored Heron egg in it. Now that’s weird! 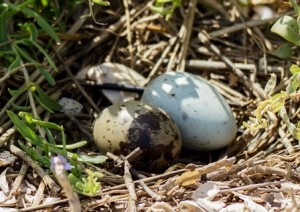 Around the island we found that 13 & unbanded had a new nest too with two eggs. I’m really happy to see some of these birds re-nesting again. I can only assume that since the tide went down they are giving it another go while they can easily get to a lot of food. We are rapidly approaching the latest nest date (6/21) but maybe this year we will break that record because of all the high tides and bad weather. Maybe some of these birds will stretch the nesting season to see if they can raise a chick or two. 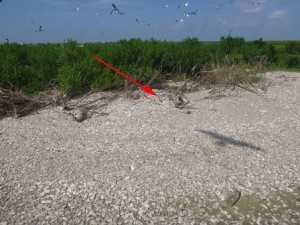 We once again found YT on one of the Sportsman Road docks. She was standing by a for sale sign on a dock. Perhaps giving us a message that we need to look into purchasing some property there? Well the house is listed for $700,000 so I don’t think that will happen any time soon YT. 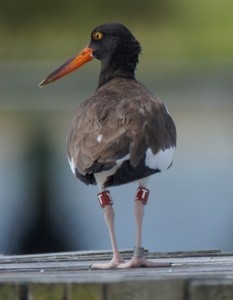 Nothing was happening with the birds on Gangs Bayou so we headed up to check on 15 & 16 who nest on Galveston Island north of 8 Mile Road. They had a nest last time and I was so hoping that they still did but the news was not good. They were both out on different reefs foraging so something must have happened to the nest. Bummer.

Over on Jigsaw we got some really great news though. The unbanded pair’s nest had hatched and they have three small chicks! Woohoo! There aren’t that many gulls there right now so maybe one or two of these little guys will make it. I certainly hope so. 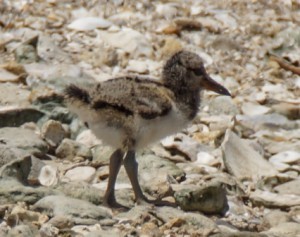 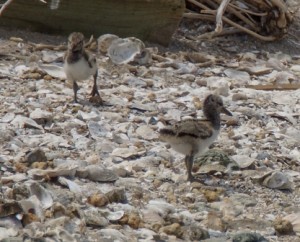 The other pair there, T5 & T6 may have a chick too. One of them was standing up in the vegetation while the other one was out on the reef feeding. Usually that is a sign that the one in the veg is guarding a chick. I didn’t want to go up and check since the three chicks were right next door so we’ll check on this situation when next we go out. 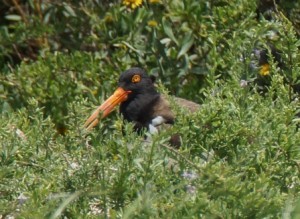 At Struve Luci, we found L8 & L9 out on their reef foraging. That doesn’t sound very exciting but it was to me because we haven’t seen that reef in months. That’s how long it’s been underwater!

We saw both chicks that have fledged there. Here’s KY, JA and K6’s chick. 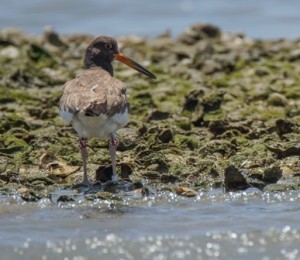 The most interesting thing we saw was a group of four birds on the rock jetty where HM & unbanded had their last nest. This group consisted of HM, his unbanded mate, WW, and X2. WW and X2 were both banded as chicks. WW appears to be a female and X2 a male so perhaps they are a pair searching out a territory. X2 was hatched in Jones Bay but WW was hatched on this very island! 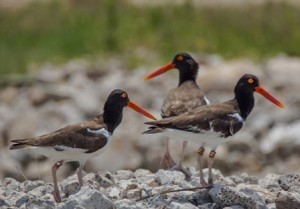 Alan got this great shot of a triple AMOY. Never seen that before! 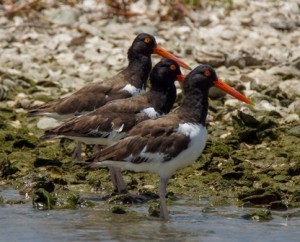 We headed up to Swan Lake but there wasn’t much happening there. We did see N3 & X4 on their territory for a change. That’s because there territory was finally not under water. Oystercatchers must be able to read the tides because they will be absent for weeks if their territory is under water but as soon as the tide goes down, they appear as if by magic. 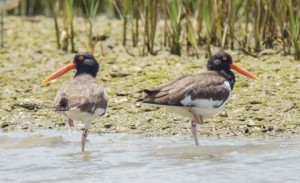 So it was a pretty good day but it was hot. I’m glad I’m not an oystercatcher sitting on a nest right now. I don’t know how they manage the heat.