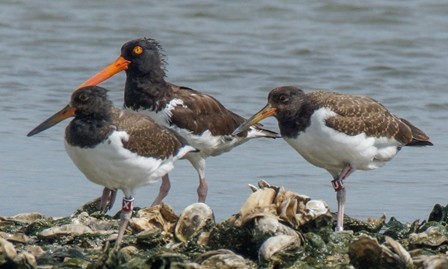 Not much happening out there these days. With Captain Tim, Alan Wilde, Amanda Hackney, Brittany Stamps and I made the rounds to check on the oystercatchers. Most pairs were hanging out on their territories sleeping or dining. The tide was too high to find any on reefs so we didn’t get any exciting resights of the non-breeders. Our main goals were to check on a pair on South Deer that had a just hatched chick the last time we were out and to check on the three chicks we banded on Jigsaw last time. After checking on the birds in Jones Bay, at Harbor Walk, and on Marker 52 and North Deer, we headed over to South Deer. Since oystercatchers can be really sneaky with their chicks, we stopped a fair distance from the island and watched with binoculars as Tim eased us closer. We saw both adults standing along the shoreline in pretty much the same place they were the last time we were out. In between them was a chick-like object but none of us could tell if it actually was a chick. We kept watching and when we got pretty close, the adults started to get upset and flew out to a reef. 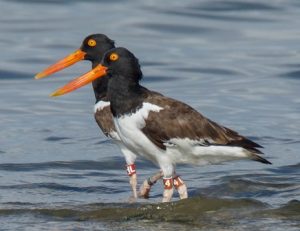 The chick-like object ran into the vegetation. Ok so it was a small bird but was it an oystercatcher? I was pretty sure it was, but given its age, I thought it should be bigger by now. We landed and I went to check. I found this: 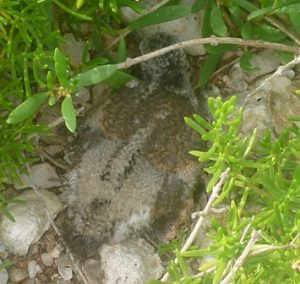 So it was an oystercatcher chick! I snapped the photo and left without touching it or even letting it know I’d found it. It wasn’t big enough to band yet so to make things easier on all of us, I opted to give it a few more weeks before handling it. We checked on the other pair on South Deer that I thought might have a chick but they were not around and after searching their entire nesting area, we decided their nest must have failed. We got one surprise around the backside of the island. There has been a pair there this season, CE & unbanded but CE has been absent a lot. We saw Y7 there with an unbanded bird. Y7 was banded as a chick in East Matagorda Bay in 2011. In 2015 she was paired with an unbanded bird on the Gangs Bayou island but they never laid a nest. This year she was paired with another unbanded bird in another territory on South Deer but they also never laid a nest. Perhaps in 2017 she will nest in this territory. 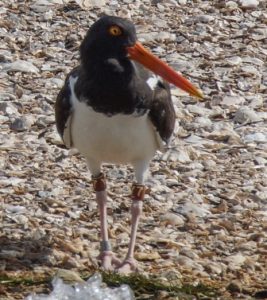 After checking the rest of South Deer, Gangs Bayou and the pair on Galveston Island north of 8 Mile Road, we headed over to Jigsaw. We saw three oystercatchers together on a reef and at first we thought it was the three chicks but it turned out to be two of the chicks (LU and LX) and one adult. 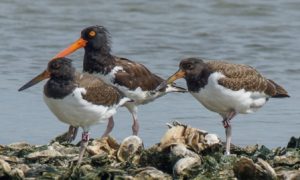 Ok, I thought, the other chick is off with the other adult but those hopes were dashed when the other adult flew in alone and landed at the other end of the short reef. One of the chicks flew over to it (yeah!) and the other one made a shorter flight in that direction. So both those chicks can fly now! Since the whole family was now together and one chick was missing I knew something was amiss. We went around to the other side of the island and pulled up to look for it. Amanda found it laying belly up on a reef. 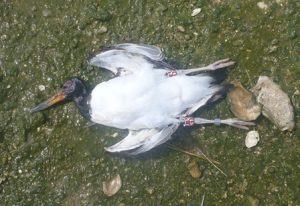 Poor thing. There was no obvious injury or reason why it died so we decided to do an onsite necropsy and see what the stomach contents looked like. The stomach was really hard and we found several fish vertebrae inside. Oystercatchers eat mostly soft foods and fish vertebrae are not in their diet. I’m guessing they either impacted the stomach or punctured the stomach. Either way it wasn’t a good ending for that little guy. We buried it on the island and moved on.

Not much happening on Struve Luci though we did see about 15 Black Skimmer chicks which is good news. 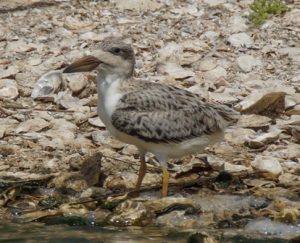 We checked out the new breakwaters north of the I-45 bridge and found only one pair of oystercatchers present, the pair that nests very close to that area.

So that was it. Normally I’m done monitoring by now but because there is still one chick left, we’ll go out again in about two weeks to band it. Hopefully it will make it!

This project is supported by the Hershey Foundation and several private donors. If you would like to contribute you can do so by clicking on the Donate Now button below. All donations are tax deductible and GREATLY appreciated.