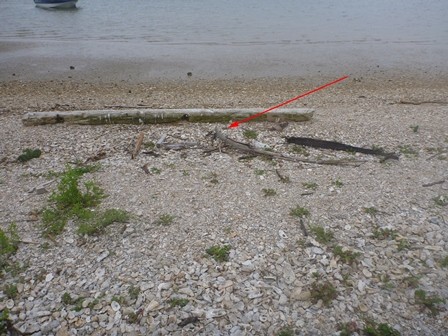 The wind was too high to go out to East Matagorda Bay on Monday and because I was attending a Loggerhead Shrike Working Group meeting on Tuesday and Wednesday, I didn’t have any available days to switch to so we were only able to get out to West Galveston Bay this week. In addition, our faithful photographer Alan Wilde had the flu so he wasn’t able to go with us on Thursday to West Galveston Bay. The resulting photographic effort by me is lacking without Alan there!

Tim Long took us out in his fabulous boat and since there wasn’t going to be any wind or rain issues, we made the rounds in the opposite direction from the last two surveys. We started off on a downer when right off the bat we found that P3 & unbanded’s nest had failed. We don’t know what happened but we suspect it got overwashed in the high winds last weekend. There was one egg left in the scrape but it was cold and they weren’t incubating it. They will have to try again. We found 28 & AP feeding on a reef near their nesting territory and 28 did not appreciate our intrusion. 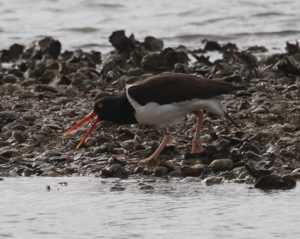 Perhaps he was angry because this Peregrine Falcon was sitting where he usually nests. 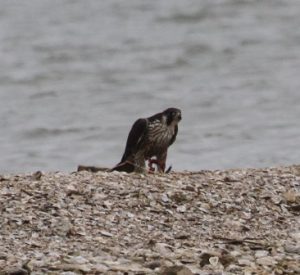 He should have been happy about that however because we discovered the falcon was eating a Laughing Gull. One down, 1000’s to go! All the birds in that area were lounging around not doing much of anything. Here’s my buddy H0 and his wife JC. 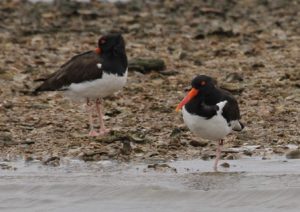 The pelicans in this area look like they are already nesting. 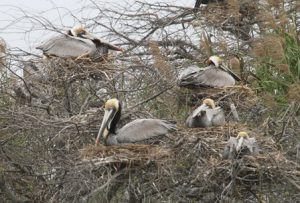 Then we discovered that 23 & WY had a three egg nest behind a landscape timber! There’s no telling how long they’ve had it because I don’t think we could see them from the boat if they were laying down on this nest. Crafty little buggers. 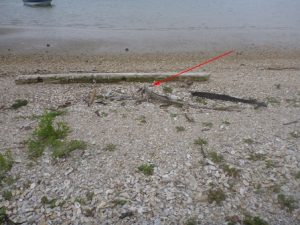 J6 & UF were guarding a one egg nest. They don’t usually start incubating until they have two eggs but they have to keep guard of the one egg so a gull doesn’t get it. 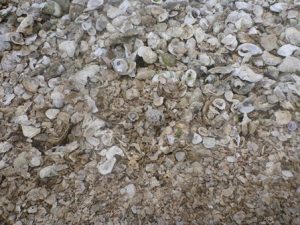 Can you see the egg? They laid it here: 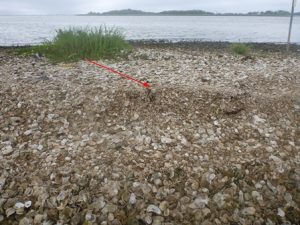 This is a typical nesting scenario unfortunately. Any high tide or strong wind that blows the water around will overwash it. These birds just don’t have many places to nest. There wasn’t much happening on South Deer. The tide was really low so these birds were mostly out on reefs feasting the day away.

We suspected that 15 & 16, the pair that nests on Galveston Island north of Sportsman Road, had a nest but we didn’t go up and check that one. That area is prone to mammalian predators and we didn’t want to leave a scent trail to the nest so we stayed on the boat and observed from there. We’ll keep an eye on them to be sure. On Jigsaw Island we found WW & and an unbanded bird hanging out on the shoreline. WW was banded when he was a chick on Struve Luci Island in April 2013. He’s pretty easy to recognize because he only has one color band. When we banded him as a wee tot, he had a cut on one leg and we didn’t want risk the color band rubbing it and keeping it open so we only put one on other leg. He’s the only oystercatcher with only one color band. He’s never nested before so it will be interesting watching to see if he and his mate make a nest this year. 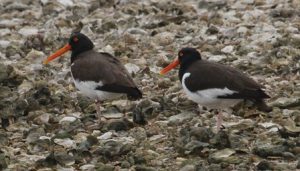 We found an Osprey sitting on some debris here and it made a nice photo. There seem to be a large number of them around this year. This one’s for you Alan! 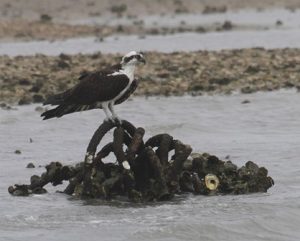 Speaking of Struve Luci Island – we checked that next. L8 & L9 whose first nest already failed, had started a new one and had one egg. One of them was standing over it guarding it from the voracious Laughing Gulls that hang around there. HM was incubating his nest and JA was feeding along the shoreline with his chick following him. 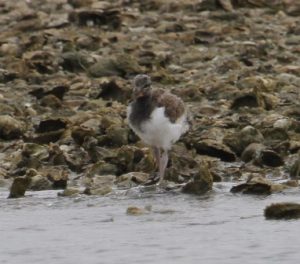 Unfortunately the pair with the other chick, 12 & unbanded were out sleeping on the reef and we didn’t see a chick anywhere around. Not good. I decided I’d come back and spy on them from shore when we were done on the boat. There was another Osprey perched up here too. 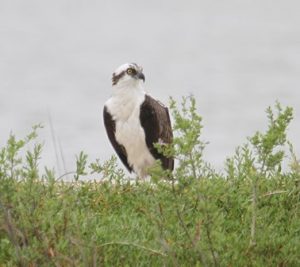 We headed up to the breakwater just north of the I-45 and got to go under the railroad bridge while a train was going over it! Pretty exciting stuff. We didn’t see any birds on the breakwater shell pad which was disappointing since they’d been defending it so nicely the last two times we were out. Not to worry though. We found YK feeding on a reef nearby and he flew back to defend his pad when we got to close. 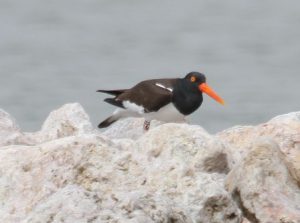 He got into a scuffle with another bird that was trying to take over and he chased it off nicely. Good job YK!

Up in Swan Lake there wasn’t much happening but K7 & unbanded were still incubating their nest though which is good news. The rest of the birds were either out feeding on reefs or hanging out on the breakwaters. Back down in West Galveston Bay we checked on the pair by the Tiki Island boat ramp. There used to be two pairs here but now there is only one. The small islands where they nest are severely eroded now. The one pair that’s left keeps moving between the islands and I’m not sure which one they will nest on. I guess they aren’t sure either!

When we were done on the boat, I went over to spy on the Struve Luci pair with the scope. I didn’t see them from my usual spot so I went over to the boat ramp near there to see the other side of the island. I found this: 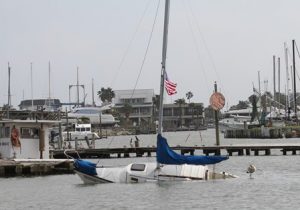 Looks like someone had a very bad day. I couldn’t see the pair with the missing chick on that side of the island either so I don’t know what’s going on with them. I sure hope that chick is ok.

We’ve had a great response to the Adopt-an-Oystercatcher program! Thank you to everyone who has adopted a pair of birds. I will be sending out updates at the end of every month and sometimes in between if something exciting happens with the pair you adopted. If you aren’t familiar with the program – you can adopt a pair of oystercatchers for a $100 donation and I will update you monthly on their progress throughout the breeding season. Most pairs are from West Galveston Bay, but there is a pair from Dickinson Bay and a pair from Swan Lake too. Once I get out to East Matagorda Bay, I will add some from there.