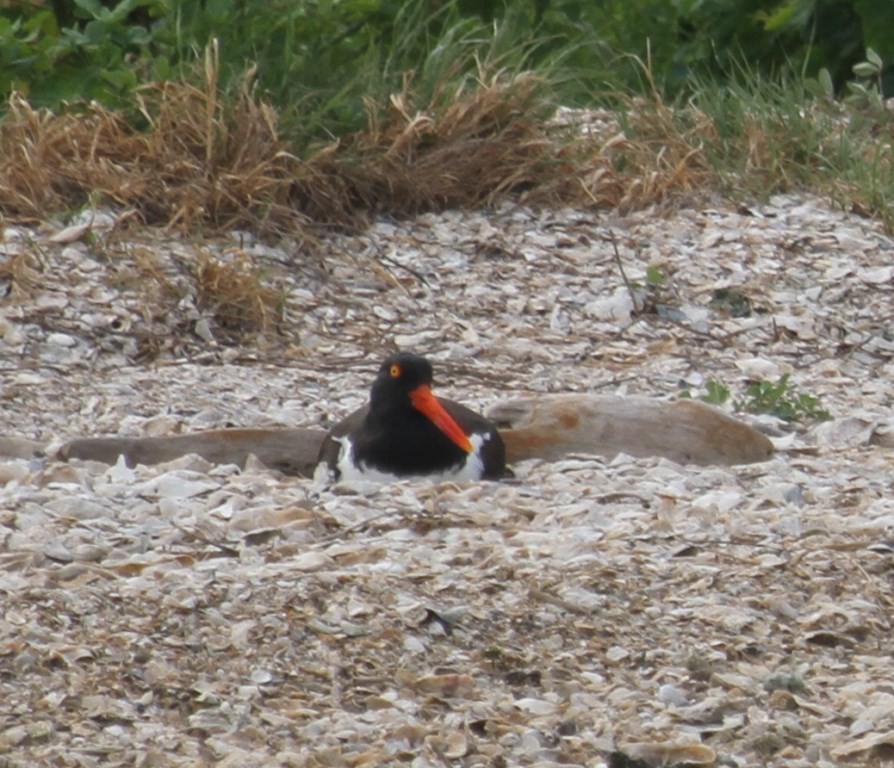 The weather was on our side for a change and we were able to get out to both West Galveston Bay and East Matagorda Bay this week. Woohoo! On Wednesday I headed out to West Galveston Bay with Alan Wilde and John Wright. No fog! Sadly I forgot to get the banding toolbox and the nest box from the back of my truck at GCBO so we weren’t able to trap any birds but we made hay anyway and focused on getting some signs replaced that badly needed it.

R3 & unbanded’s nest on one of the Fat Boy’s Islands that we found last week was already overwashed. I suspected that would happen. They didn’t put it up on top of the island but rather along the bottom of the vegetation line and that just means failure. I tried to give them some advice but I don’t think they listened. One of these days I’m going to get a sign that says “put nest here” and see if that helps.

The wind was supposed to pick up later in the morning so we headed up to Swan Lake first. Along the Tiki Island channel that leads out to the GIWW we found an unbanded pair looking like they were going to nest on an island that is frequently under water. I don’t think that’s going to go well guys but you never know. 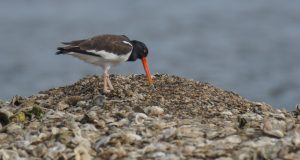 I thought 20 & unbanded might have a nest by now but they were out on a reef feeding.

We found the newly banded LR and his/her unbanded mate on the breakwater so they didn’t have a nest either. 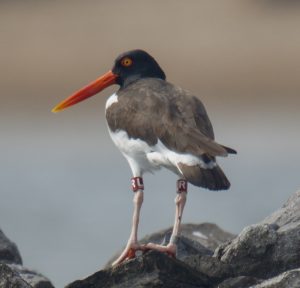 K7 & unbanded were going strong incubating their nest. There weren’t any gulls around so we replaced a couple signs there and left them to it. 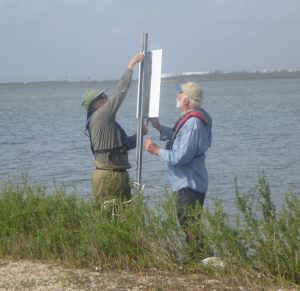 I was very happy to see the R5 & X3 had returned. They weren’t on their territory on our first two trips out and I was afraid they’d abandoned though they fledged a chick last year so you wouldn’t think they give up on it. They didn’t! That put L5 & 39 back in their awful territory and that’s where we found them.  But as awful as their territory is, it is still better than poor 11’s. We found him alone again foraging on a reef next to the mud bank that gets smaller and smaller every year. It’s hard for me to believe that he doesn’t have a mate because they always have a mate. But maybe his territory is just that bad. We’ll see as the season goes on. 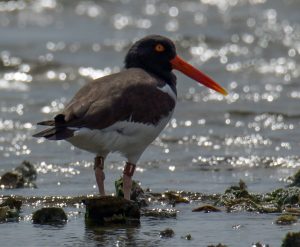 We took a bumpy ride back down to West Galveston Bay. Our 20 foot aluminum tunnel hull is great but the ride just can’t compare to the 22 foot fiberglass boats that John and Tim were ferrying me around on the last two years! We found everything was fine with the existing nests on Struve and everybody was where they were supposed to be. JA & unbanded still don’t have a nest. Better hurry up guys! On Jigsaw T5 & T6 were busy making a scrape up high on a shell bank which excited me. No sign of their chick this time so I guess it was just back for a visit when we saw it two weeks ago. 16 & unbanded were still incubating their nest on Galveston Island which was very good. The incubating bird was hunkered down so low that we couldn’t see it until we almost landed but then it flew off the nest and we retreated quickly.

There were no birds on the Sportsman Road docks for a change. Nothing happening down at Gangs Bayou either so we checked Confederate Reef since it was above water. There we found 7 or 8 birds. The kept flying and I counted keep up with how many there were and then a Peregrine Falcon spooked everything up from the reef. Alan’s photos revealed Y7, Y5, U3Y, E7, and YM. Y7 was banded as a 2011 chick in East Matagorda Bay. It’s been a South Deer breeder for a number of years but has never fledged a chick. Y5 was also banded as a chick in 2011 but in Swan Lake. We’ve seen it any number of times on reefs but we’ve never found it breeding anywhere. 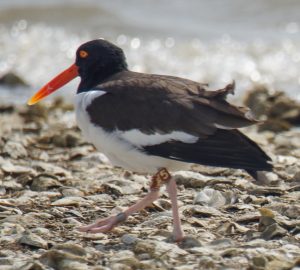 U3Y is T5 & T6’s chick from last year. It hasn’t gone far from home! E7 was banded as an adult on Jigsaw in 2011. It bred there for a number of years but abandoned that island several years ago and we don’t know where it breeds now. YM was banded as a chick in 2014 on the Tiki Island Spoil. We’ve not found it breeding anywhere either. 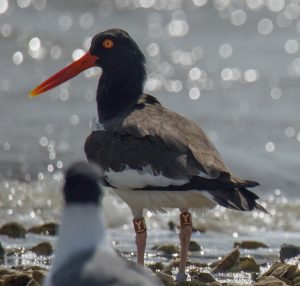 Over on South Deer, KK & unbanded were incubating their nest. All the rest of the South Deer were out feeding on reefs except when we rode by JN & UW’s territory I didn’t see them anywhere. Suspicious. I scanned the shell ridge and got a brief glimpse of a black head and orange bill right behind the ridge line. Bingo. Three egg nest. Great job guys! They need to nest early before the Laughing Gulls get going or they don’t stand a chance. That orange bill is just danged hard to hide!

We headed over to North Deer and Marker 52 and found most of the birds there but no nesting activity. These guys need to get going before the pelicans move in but it may be too late already. There were many pelicans already in the area and starting to stake out their territories. Those big feet are hard on oystercatcher eggs. The Great Blue Herons on North Deer are on nests in the trees already but they always nest early just like the oystercatchers. The ghost ship was partially sunken this week.

There wasn’t anything happening in Jones Bay except this Peregrine sitting on the Tiki Island spoil sign.

On Friday Robin and I headed out to East Matagorda Bay to see what was happening there. There was a strong north wind but we decided to at least check the birds that are along the GIWW. When we got out to where the first pair was, it didn’t look too bad out in the bay so we headed out. ER & unbanded were on their sad little spit of an island which is really just a reef now. Same for KN & unbanded. Last year when we banded KN we were going to call it KeN but then we discovered she’s a girl so now we call her KeNdra! The other pair that belongs there wasn’t home so we headed out to Dressing Point, the only colonial waterbird island in that entire bay. There were tons of white pelicans there but they will leave soon. The Great Blue Herons were already set up in the cactus patch that’s in the middle. How do they nest in that stuff?! Surprise, surprise we found a pair of oystercatchers there and one of them was clearly incubating a nest. 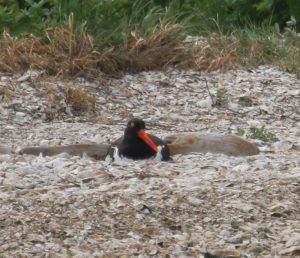 Since that island is small and the herons were already going strong, I didn’t go up and check it out but I took some photos of the bird that wasn’t incubating and discovered it is M4. Once upon a time M4 nested on the Chinquapin Islands. When her island there got too degraded she moved over to another spot near Boggy Creek. That was not a good area so now she’s on Dressing Point. A wise choice I’d say. They stand a good chance of fledging a chick there. 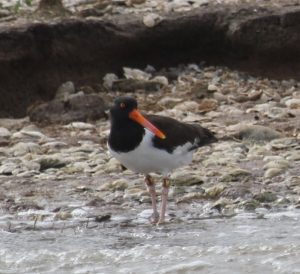 From there we headed over to the Oyster Farm and we found KT & unbanded in their usual spot but no nest yet. Another surprise – KT still has his transmitter from last year. 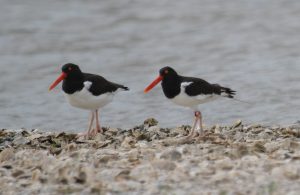 I fired up the VHF receiver and found that amazingly the transmitter is still transmitting. That battery has got to be about to run out. I’m really surprised he hasn’t gotten it off. The birds in West Galveston Bay managed to shed their transmitters. I’m sure he’ll work his way through the harness soon and get it off. If not, I’ll try to recatch him and remove it.

KM & unbanded were on the next island over and they were acting a bit suspicious but I didn’t find a nest so we headed over to Old Gulf Cut which is a long haul across the bay. Usually we are fighting the wind because it’s almost always from the southeast but today it was out of the northeast and we had it at our backs. Nice. Still choppy though so it was slow go. When we got to Old Gulf Cut we found that 17 & unbanded had a nest just as I suspected they would. 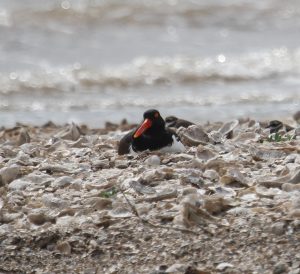 They always nest early and as a result are almost always successful. Last year they fledged the only chicks in the whole bay. We checked the next island over which usually has a pair and found nobody home. We found one of them on another island nearby that is really nothing more than a reef and sadly it was sitting on a nest. I can’t see how they can be successful there but you never know. Maybe they will get lucky.

We went through the cut and headed back up the GIWW. We were looking forward to getting out of the wind but it was not to be. The wind was blowing right down the channel and as a result we were heading straight into it. Slow going again! Seemed like it took forever to get back to the boat ramp. On the way we discovered YC & unbanded, the missing Chinquapin pair, foraging on a reef. So three new nests in that bay to watch over. Go oystercatchers!

Note: All trapping and banding for this project is in accordance with federal and state permits issued to Susan Heath, GCBO Director of Conservation Research. Bird handling by volunteers is only permitted in the presence of Susan Heath and volunteers are trained in proper