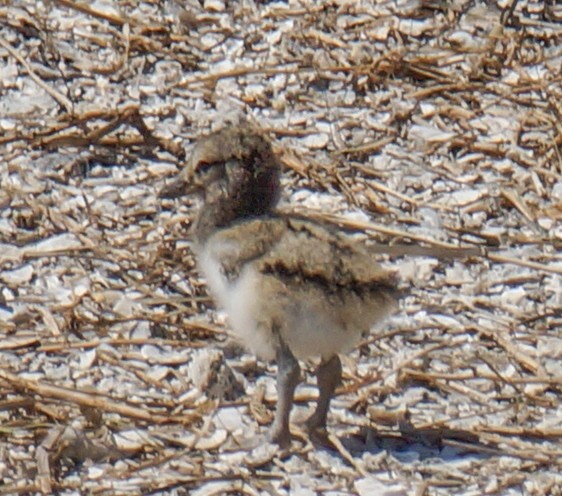 Alan and I were joined by two special visitors this week. Kay Hale is a former GCBO board member and long-time supporter of the oystercatcher project and Judy Boyce is the Executive Director of The Hershey Foundation which has been very generous to GCBO over the years. Both of these wonderful women have supported us for years in our effort to get our own boat so it was a real treat to be able to take them out on said boat!

We tried to check on R3 & unbanded whose nest right by the boat ramp should have hatched. One of them was feeding on a reef and the other one was up on the island but not where the nest was. I tried to watch the one on the reef to see if it would bring back food for chicks but it saw us watching and flew back and stood by the other one. They don’t give up their secrets easily!

We headed up to Swan Lake first to get it done while the wind wasn’t blowing too much. We found some Black-bellied Whistling-Ducks on one of the breakwaters. What’s up with that? They are supposed to be freshwater ducks! 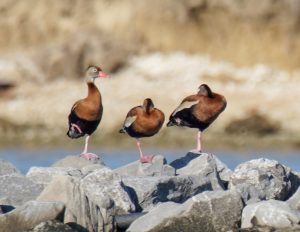 20 & unbanded were incubating their nest but LR & unbanded weren’t. I checked and found their egg was gone. I suspect a coyote got it but there’s no way to know for sure. We tried to spy on K7 & unbanded from afar so we could tell how many chicks they have but we didn’t see them and their whole area was covered with white pelicans. 11 & unbanded were out on their former island.

Believe it or not that used to be a nesting island and they fledged chicks from it! Erosion has turned it into a reef at this point. There was no sign of L5 so perhaps he was off in search of a new mate and telling grandiose tales about his wonderful nesting territory J. X3 was out on a reef and we didn’t see R5 anywhere but the nest they had last time was gone. Strange. Then suddenly R5 appeared as from nowhere. Oystercatchers are very talented in that way! It dawned on both Alan and I at the same time that they probably had a nest in another location in the vegetation so I went to search and sure enough I found one egg. Sneaky!

39 & unbanded were up where we suspect they will try to nest but there was no sign of eggs or even a scrape. We spied on K7 & unbanded from there because that gave us a view of the backside of their island but we still didn’t see them so we motored over there. They were nowhere to be found which is quite strange as K7 is usually pretty vocal about his dislike of us. We checked the breakwater to see if they were there but we only found X4, a bird banded as a chick in 2011 in West Galveston Bay. It has paired up a couple of times but never laid a nest that we’ve seen. This year it appears to not be paired. It must be a male or I’m sure L5 would have made his move! 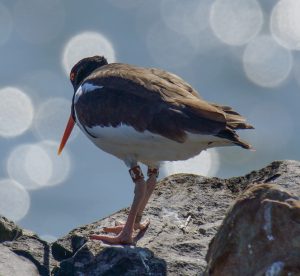 We headed back down to West Galveston Bay and checked on Struve Luci and Jigsaw. All the nests on Struve Luci have failed, even the new one we found a couple of weeks ago. Alan got a photo of one of the adults carrying food like they do when they have a chick but I don’t see how that could be possible since it’s whole territory was under water a couple of week ago. Maybe they will surprise us though. That would be nice. On Jigsaw, T5 & T6 were out on a reefy area connected to their nesting island. One of them appeared to be brooding chicks (it was time for their nest to be hatched) but we couldn’t find any chicks. I’m hoping they will surprise us too. YE & unbanded were sleeping the day away and LH & WW were still incubating.

Along Galveston Island we found 16 & unbanded hanging out very close to 8 Mile Road which isn’t a good spot to be. I hope they don’t try to nest down there. There weren’t any oystercatchers on the docks so we proceeded to the Gangs Bayou area. A1A & unbanded and A4A & unbanded were still incubating away but the unbanded pair’s nest had failed for some unknown reason. That gave us the opportunity to set up the noose carpets and get one of them banded. It only took about 5 minutes before the female got caught. We banded her A5A and Kay and Judy were pretty happy to see her up close. 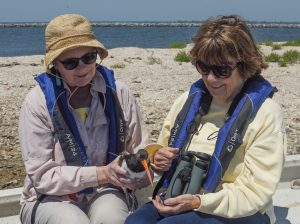 A5A on the other hand was very happy to get away from us when we let her go! 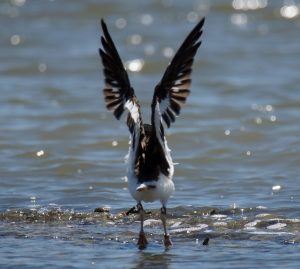 We checked Confederate Reef and found two youngsters from last year. U2W is a chick from JK & unbanded who nest in Drum Bay. I only made it down there a couple of times last year but I’m glad I was able to band this chick so we know who it is! 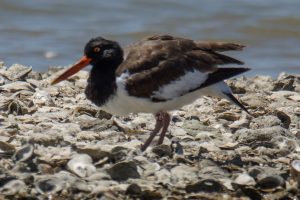 The other youngster was U3Y who is T5 & T6’s chick from last year. I’ll refrain from fawning over it this time. Ok well maybe a little bit! I watched T5 & T6 try to nest within a Laughing Gull colony over and over for 6 years until some Royal Terns displaced the gulls and T5 & T6 were finally able to fledge a chick last year! When we went out for our first check in mid-February U3Y was still hanging out with its parents! I guess they were fawning over it a little bit too to let it stay around so long. 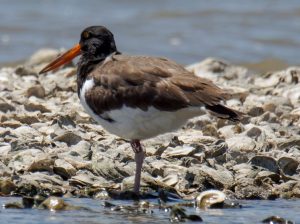 We snaked our way to the backside of North Deer through the reefs to check on the pairs we discovered nesting there last week. Both were still incubating as was JR & JH on the other side of North Deer. 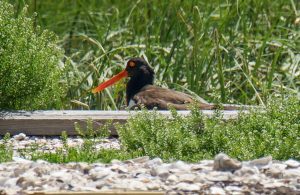 J6 & UF were loafing on their teeny island. They should have nested a long time ago when the tides were low. They don’t stand much of a chance now! JJ & P4 were looking for all the world like they were incubating a new nest in a pretty good spot but we found no eggs there. 23 & WY had a new nest though and oh happy day H0 & JC were standing up on their shell bank with a chick! It was time for their nest to hatch so I was wondering what their status would be. 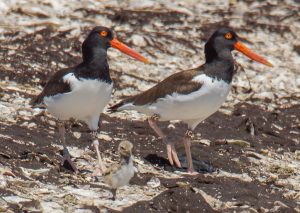 Keep that baby safe you guys! We didn’t see 28 & AP anywhere so we motored down to check on ET & unbanded the pair we found nesting on the backside of the GIWW island down by Harbor Walk last week. Sadly they weren’t there so their nest must have failed. We circled the whole island but we didn’t find them anywhere. I suppose we can hope they were hiding in the vegetation with a chick. Back in Jones Bay CA & Y2 were still incubating. It was time for P3’s nest to be hatched and after we watched them for a bit from afar, we saw one chick running along the shoreline by one of the adults! Woohoo! Keep that one safe too! 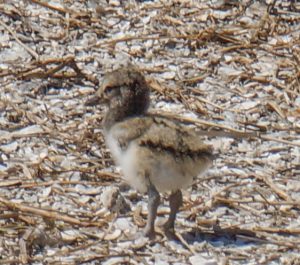 That was a good way to end the day but of course we had to check on Fred (FR). He was on his island with his unbanded mate. Poor dude. His eggs are always getting washed away and his women are always leaving him. Hang in Fred, help is on the way. I am working with the Galveston Bay Foundation, Ducks Unlimited, and the U.S. Fish and Wildlife Service Coastal Program to do some island restoration specifically for oystercatchers in Jones Bay. If it works, we will do more in other locations.

We checked on R3 & unbanded again on our way back to the boat ramp. One of them was standing up by where the nest was and there appeared to be one egg still in the nest. The others must have hatched. Hopefully they have a chick or two! 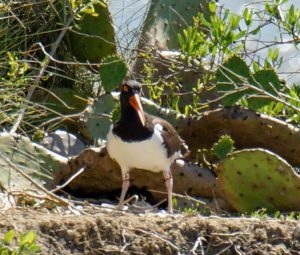 I wasn’t able to get to East Matagorda Bay this week because of the weather but I’m going there on Monday to check things out.