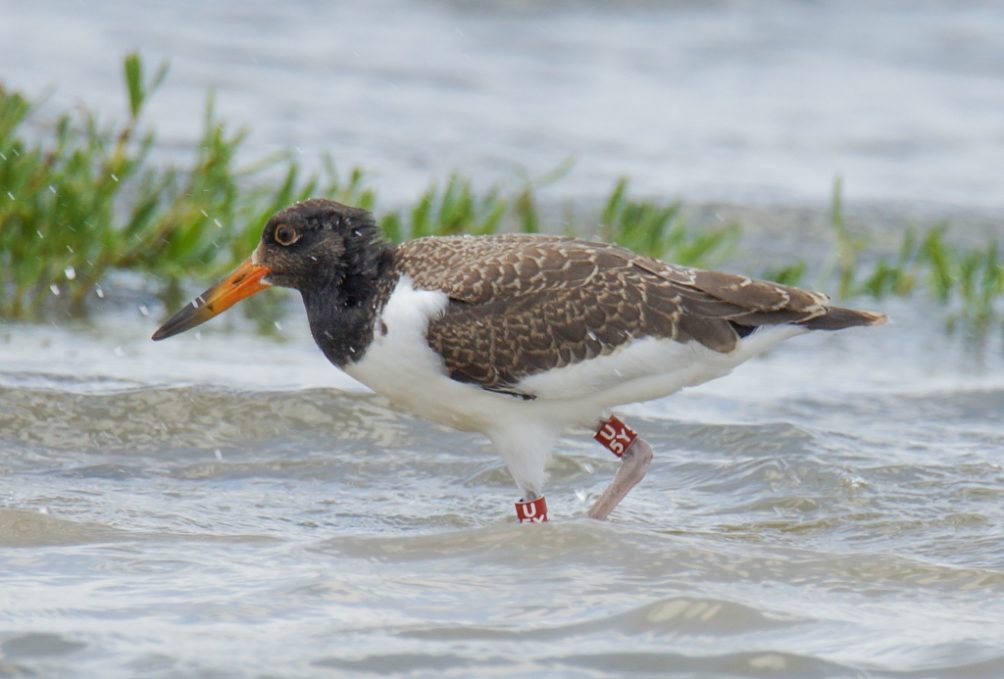 I THINK the crazy winds might be over finally, but that didn’t happen until Thursday and we had to go out to West Galveston Bay on Wednesday in 18 mph winds again. What a drag! I was joined by Alan Wilde, Scott Buckel, and Bev Morrison for a bumpy tour of West Galveston Bay. There were white caps on the water near the boat ramp which wasn’t a good sign! We headed out to Jones Bay but didn’t find either of the pairs that nest there. The tide was still super high and I think the birds have to leave their territories to find food. We checked Marker 52 from the Jones Bay side and spotted one of H0 & JC laying down on the shell bank but there was no nest. Same for 28 & AP. The Royal Terns in the area where 28 & AP usually nest were all gone so that part of the island must have overwashed in the high tide.

We headed over to North Deer to check on the chicks. One of the unbanded pair was hanging out but we didn’t see the chick. The adult was pipping though and acting like it was protecting a chick so hopefully it’s still alive. YM & JH’s chick was walking along the shoreline with JH but when we headed closer to get a photo, it ran up into the vegetation and hid. That’s a sure sign that it still can’t fly. The high tides are surely making it hard for the adults to feed the chicks and that is causing delayed fledging. I sure hope they can keep them alive until the tide goes down.

We zipped back across the GIWW and checked on the other Marker 52 pairs. JJ & P4 were hanging out with nothing going on. Alan and I were interested to see who was with 23 because we’ve seen several different birds with her over the last several weeks. She wasn’t there though and we found H0 feeding in her territory. Better watch out H0! 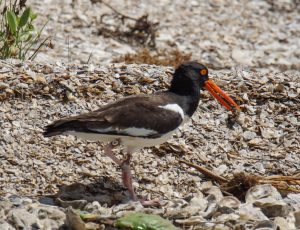 Finally we checked on J6 & UF and found J6 guarding the tiny scrap of his island that was above water. We stopped to look for an egg but found none. J6 was not happy we were there and circled us until we left. 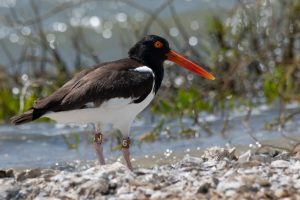 We went back across the GIWW and checked on C1A & unbanded and their chick U6U. We found C1A and U6U together where they’ve been the past few weeks. I’m pretty sure that chick is fledged but it probably doesn’t have the flying skills to negotiate an 18 mph wind so C1A is sticking close to home with it. We bumped our way across the bay to South Deer. Water was spraying us mightily but Bev seemed to be having a great time with it!

On South Deer, HL & unbanded were hiding behind some spartina which would ordinarily make me think they had a chick but I know their nest failed so I’m not sure what they were up to. I’ll keep watching them though! 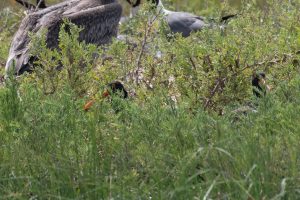 We didn’t see the next three pairs but we found LL and KK both guarding their territories and trying to stay out of the wind. Oh wait that staying out of the wind part was us!

We had to change the tide gauge on Confederate Reef and thanks to Alan’s willingness to get soaking wet (again!) we got it done no problem. We checked the docks along Sportsman Road but there weren’t any birds there so we continued on to Gangs Bayou. The only oystercatchers there were A1A & unbanded on one of the small mounds behind the breakwater.

When we headed back up towards 8 Mile Road we noticed Y7 sitting on a cement platform that comes out from one of the docks where we don’t normally find birds. Y7 is the male from one of the missing pairs on South Deer. Not sure what he was doing there but he gave us the evil eye for stopping to check him out. 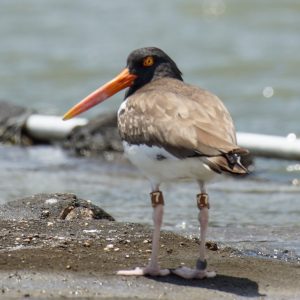 We looked for 16 & unbanded and found an unbanded bird on a brick/cement jetty that sticks out into the bay. It seems like it would be a good place for them to try to nest but they never have. 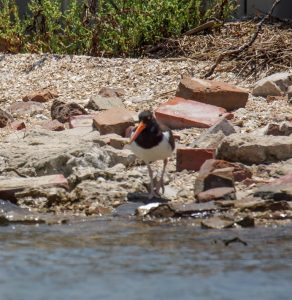 We headed to Jigsaw and found that T5 & T6 still have the one egg so I guess they decided not to lay anymore. There wasn’t anything happening with the other two pairs there.

The final island to check was Struve Luci. We found U5Y, one of L9 & unbanded’s chicks hanging out with the skimmers and no adults there. It stretched its wings out while we were watching it and it looks like it should be able to fly so perhaps it’s the same as U6U. It doesn’t have the flying skills to negotiate the wind yet and the adults went off to feed without it knowing it could fly to one of the docks if it needed to escape something. 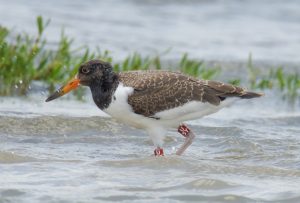 We haven’t seen L9 & unbanded’s other chick in several weeks so I’m afraid it might not have made it.

We spotted Kori Lugar, U of H student, observing the birds for her summer project. 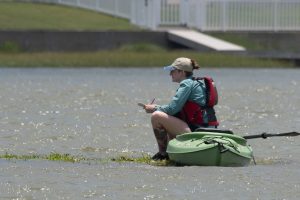 12 & unbanded were standing in their territory and X7 was on one of the docks but we didn’t see HM anywhere. We didn’t see LT & JA and their chick U5U. When I got home I had an email that LT was seen at East Beach and JA was at Bolivar Flats. U5U wasn’t with either of them so I guess it’s off on its own already. I videoed the skimmers for counting later and we headed back to the boat ramp.

On Friday I went out to East Matagorda Bay with Amelia Grider, one of our shorebird technicians, and Harold and Sheryl Travis out RV volunteers. The wind was less than 10 mph! What a nice change. The tide had gone down enough that the islands were above water again but most of the oystercatchers weren’t there. We found A7A & unbanded on the Chinquapin Islands and a single unbanded bird at the Oyster Farm islands. The Great Blue Heron eggs there had hatched and we saw at least two pterodactyls. 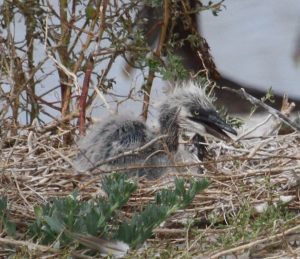 We didn’t go down to the west end of the bay because we’d seen LC & R9 on the beach the day before so I knew they didn’t have a nest. Instead we cut over to Old Gulf Cut and found 25 there by herself picking her way along the reef feeding. 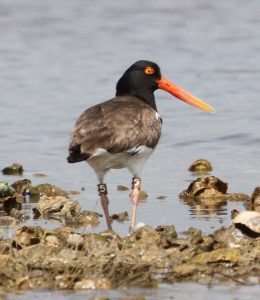 And so ended another week of oystercatcher monitoring. I’m not sure what June will bring. Many of the birds appear to have given up on this nesting season because of the high tides so even if the tide goes down we may not find many new nests. We’ll see!