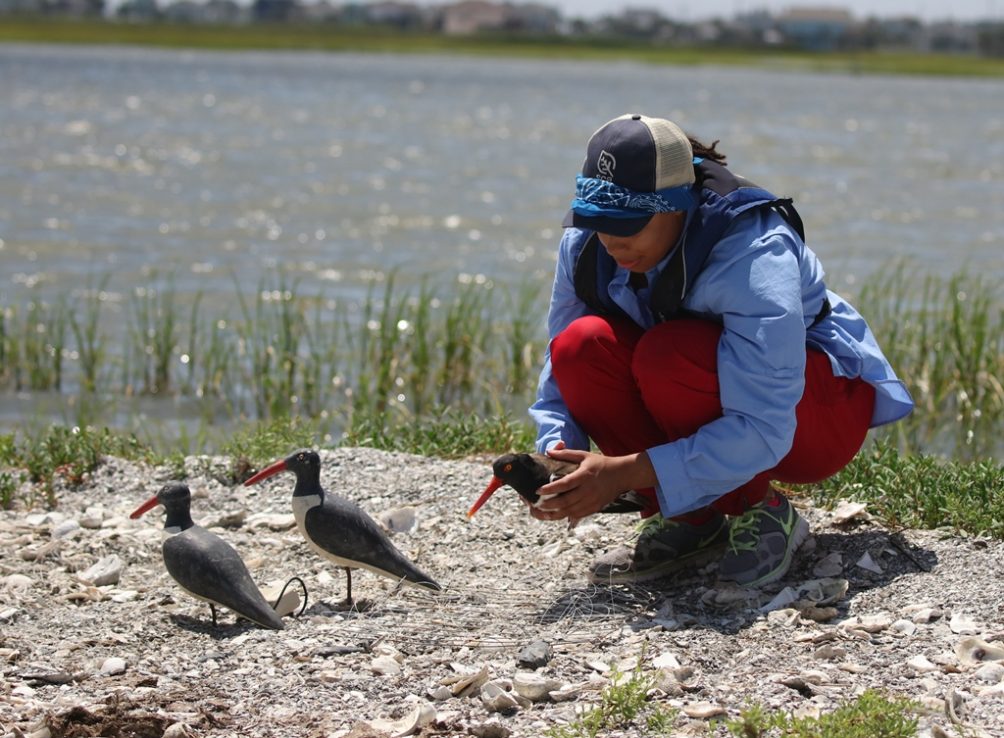 Well I thought the wind was over but I was oh so WRONG! We had to change our monitoring day from Wednesday to Tuesday to avoid the high winds and rain from the tropical low that made its way to our area on Tuesday afternoon. Alan was out of town (having a blast in Costa Rica!) so I was very happy to be joined by Debbie Respaz and Felice Yarbrough. Debbie is an ace photographer and Felice is helping with the videos for the children’s hospital in Houston and she wanted to get a little more footage. The wind was great on Tuesday but the tide was still pretty high. We headed out to the Swan Lake area first to see if LR & unbanded’s nest had hatched. When we got there they were both on the backside of the island so not incubating anymore. We looked and looked from every vantage point we could get to but we didn’t see a chick. That doesn’t mean they don’t have one though. Fingers crossed!

All the birds were back in Swan Lake but most of them were on the breakwaters. The only pair that was in nesting habitat was L5 and his apparent new mate X3. What?! X3? Ok some background here. L5 is a male and he took over his current territory from R5 (also a male) earlier this season. R5 was paired with X3 on that territory for many years and somehow L5 & unbanded ran them off and took it over. Several people subsequently reported R5 & X3 together on the Texas City Dike. We saw L5 with an unbanded bird in the territory for a while but the last three or four weeks the wind has been so bad and the tide so high that there were no oystercatchers in Swan Lake at all. Fast forward to Tuesday and we find that X3 has apparently dumped R5 and is now with L5. Drama I tell you! 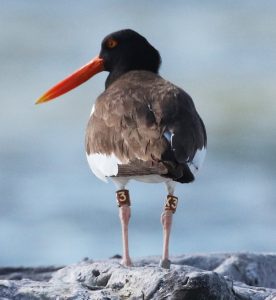 Also on the breakwaters was U8U, LR & unbanded’s chick from last year. It’s all grown up now! 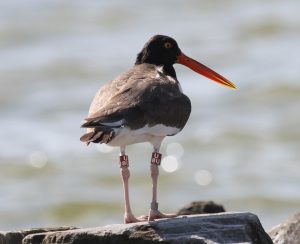 On the way back we checked on LR & unbanded again. This time one of them was feeding along the shoreline and the other one was up on the ridge appearing to keep watch. We’ll just have to keep watching them. We headed back to West Galveston Bay and checked on the Struve Luci birds.

I discovered almost immediately that I’d let the battery run down on the video camera so I couldn’t video the skimmers. Drat. My bad! L9 & unbanded were both there with one chick, U5Y so it looks like U7U didn’t make it. Dang. We did see U5Y fly which is always a joy! 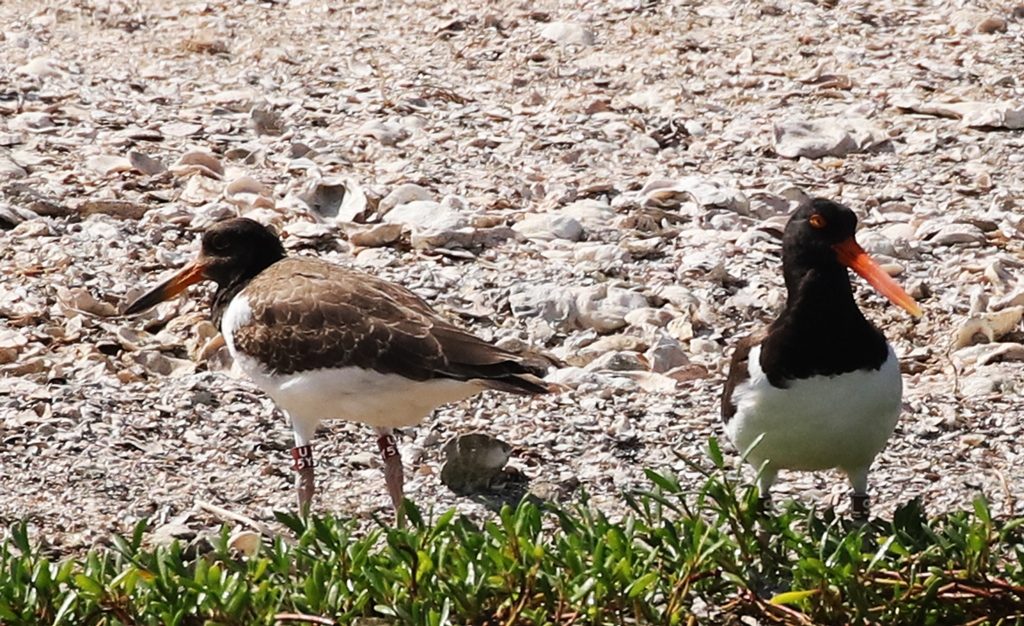 Nothing happening with any of the other birds there. LT & JA were on a dock without their chick so I guess U5U is off on its own now. KR & unbanded were up on the roof of one of the boat shelters something I’ve never seen before. 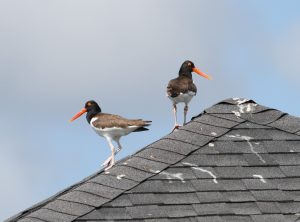 That gave me an idea. What if we got these folks to build platforms on the top of those shelters and covered them with shell? Would the birds nest up there? In Florida and along the Atlantic Coast oystercatchers nest on gravel roofs (yes you read that right) so maybe they would nest on some platforms like that. If anyone knows anyone with one of those that is interested have them email me.

HM was on one dock and X7 was on the rock wall so unless they laid another nest on the rock wall, they don’t have anything going on. 12 & unbanded were just hanging out on a shell bank.

Debbie got a great shot of one of the first Black Skimmer chicks we’ve seen this year. 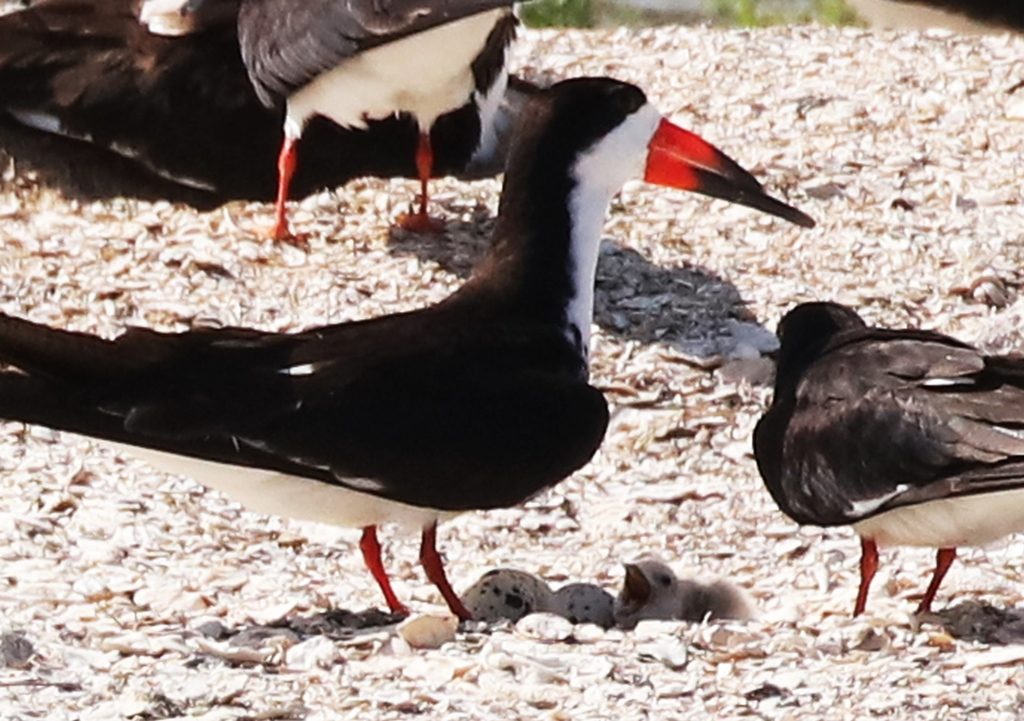 We moved on to Jigsaw and found T5 & T6 are still incubating their one egg. I think our redecorating is lovely don’t you? 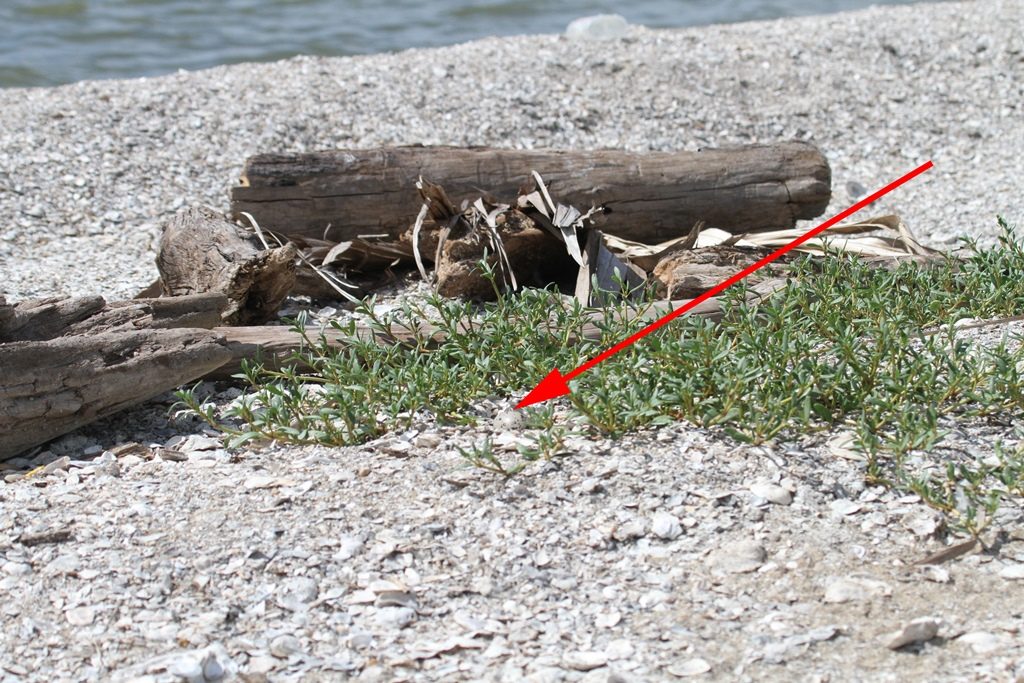 The other two pairs there were loafing so we moved on. We found an unbanded bird in 16 & unbanded’s territory but not 16. I thought we’d found him farther down the shoreline but it turned out to be a youngster from last year. The unbanded bird flew down and did the weird “I’m roosting but I have my eye on you” pose. 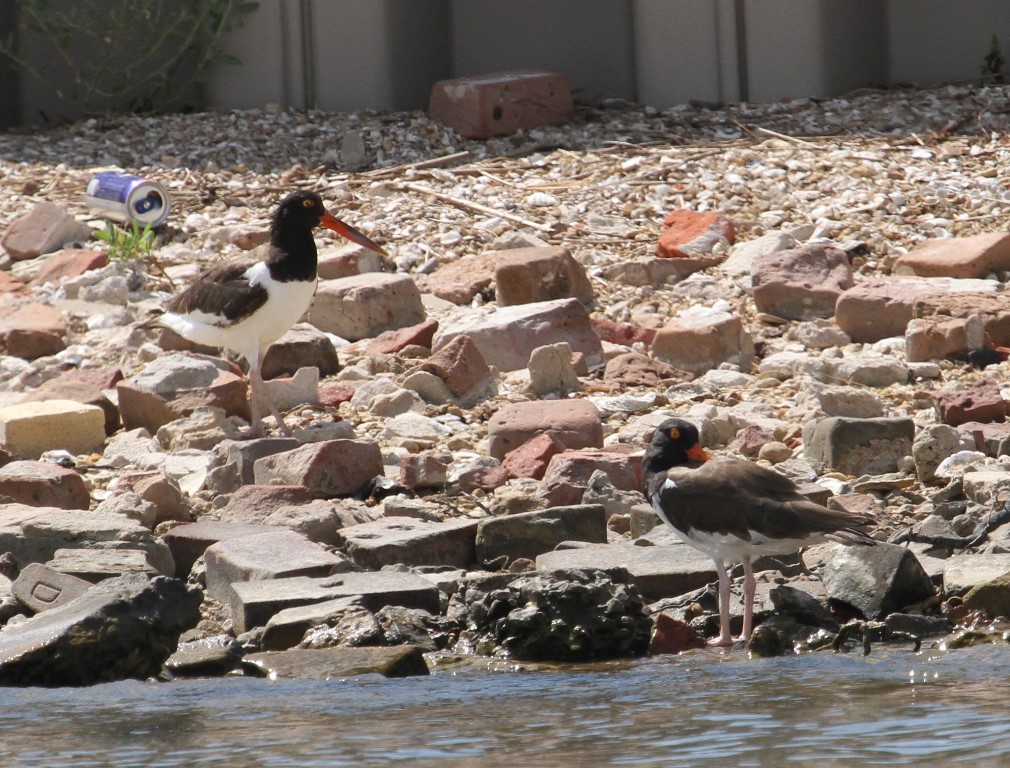 There weren’t any birds on the docks and at Gangs Bayou we found one pair on the mounds behind the breakwater and A1A & unbanded on the breakwater. There was also one adult up in the area where A4A & unbanded nest. Do they have a new nest? I didn’t feel like we had time to go check so I’ll look into it next week.

Felice wanted some video of a bird in hand so we motored down to the McAllistar Point area where there is an unbanded pair. I haven’t tried to trap birds in June with the noose carpets before because it is so late in the season that they often don’t react to the decoys. We set everything up though and this pair was all over it! They flew in as soon as I started the audio call and went to work displaying. 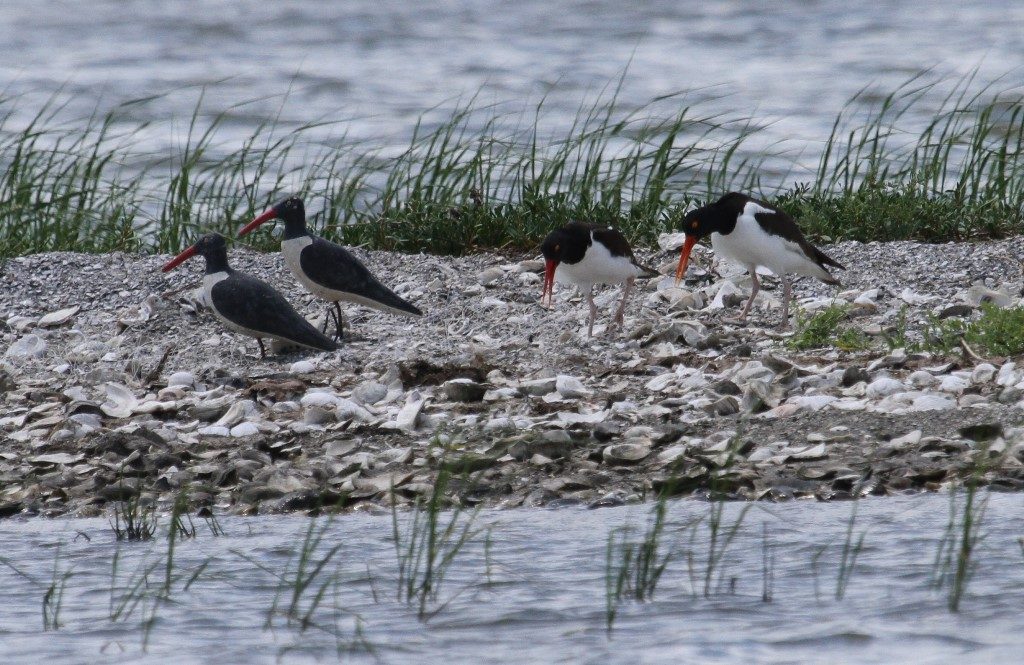 It took only a minute or so before the male got snared. Here’s Felice holding him while I anchored the boat. 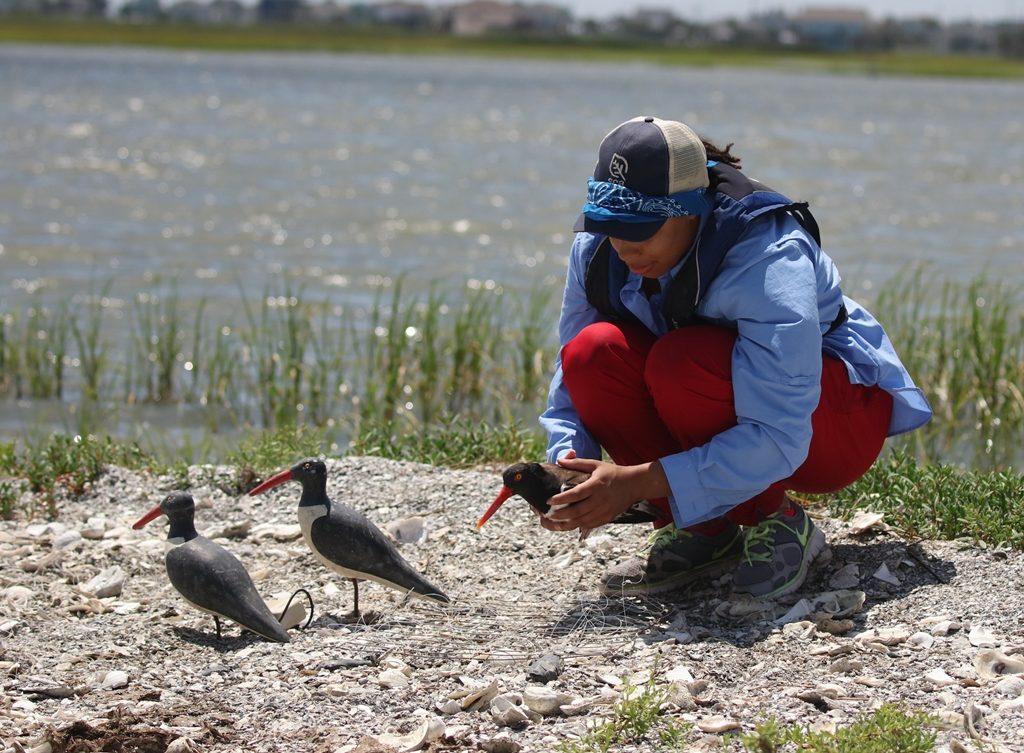 And here she is with him after I got him untangled. 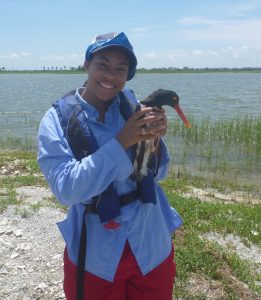 He is now C5A. I love oystercatchers that haven’t met me yet. They are easy to catch!

We headed back up to South Deer and checked everyone there. Nothing happening and several pairs were absent. On North Deer C1A & unbanded and their chick U6U were gone so I guess little U6U can fly well now. That’s good news! YM was keeping watch over his and JH’s chick U5X. It looks like it’s growing but its clear the primaries aren’t grown out enough for it to fly. Hopefully soon. 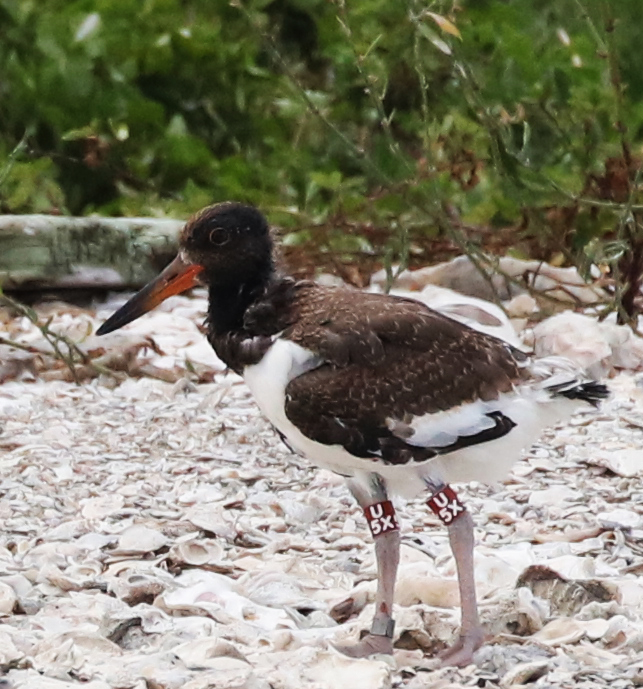 We skipped over to Marker 52 and found that XJ was hanging out on JJ & P4’s beach. Hum. We saw P4 around the corner but not JJ. I hope that isn’t bad news. Hopefully it just means that JJ & P4 have given up for the season and they don’t care if another bird is in their territory. I was interested to see who would be in 23’s territory and oddly enough we found Y5 with an unbanded bird. What happened to 23? Did she leave? She’s been mateless since something happened to WY and we’ve seen her there with several different individuals. She may be back next week. We’ll see.

H0 & JC and 28 & AP were both standing in their respective territories with nothing going on so we headed back over to North Deer to check on the unbanded pair. They were not there but I caught a glimpse of their chick running for cover. It looked bigger than last week too so will hopefully fledge soon.

In Jones Bay we found Y2 back on her nesting island but CA was on the other side of the Tiki Spoil on a mud bank. Do they have a nest there? We can’t check from the boat because there’s a breakwater ringing that thing. Hopefully Alan can kayak out there and check it out when he gets back. FR & unbanded weren’t home so we headed back to the boat ramp and called it a day. Good thing too because as I was heading back to GCBO on FM 2004 I noticed the sky was very dark ahead. I checked the radar and it looked like this. 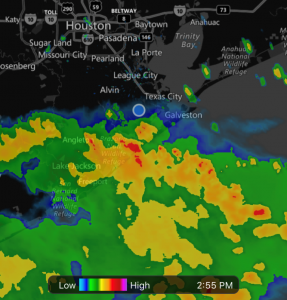 Friday I had to go out and check on the skimmers so I kept my eye out for oystercatchers too. I was joined by Alan (freshly back from his trip) and Scott Buckel. We started at Struve Luci and I videoed the skimmers while Alan photographed the oystercatchers. I’m not sure what this skimmer was doing. 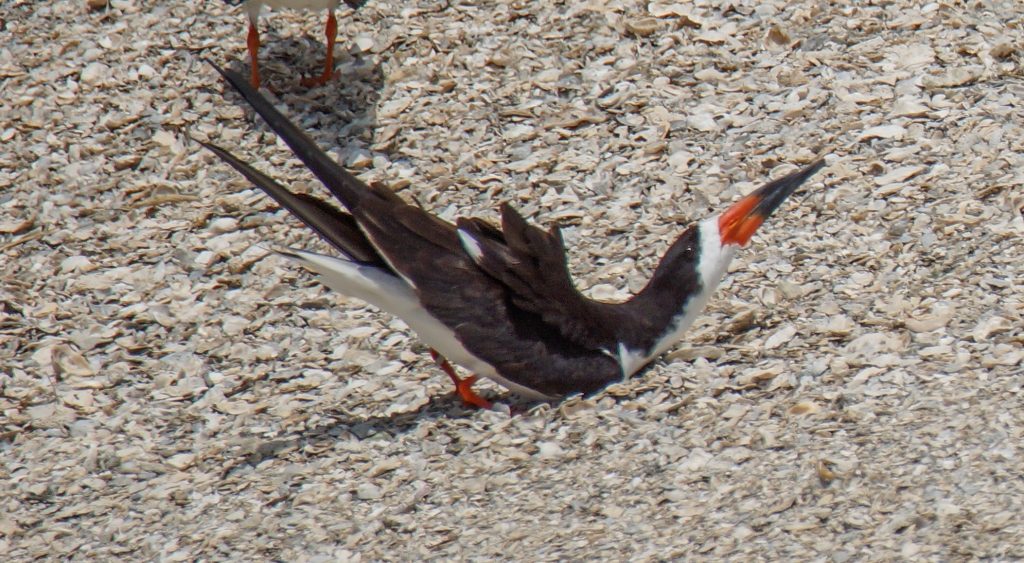 Maybe that is a breeding display? I’ve never seen one do that before. Alan got a photo of a skimmer chick that appears a little bigger than the one Debbie got on Tuesday. 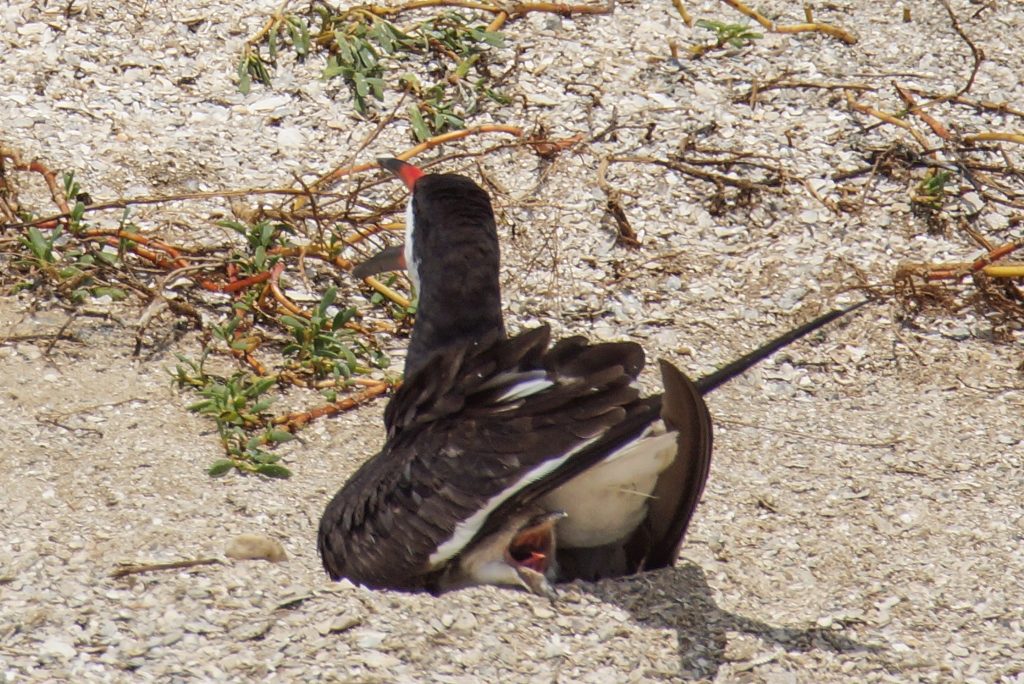 Most of the oystercatchers were there and L9 & unbanded were with their chick U5Y on one of the docks. When we were done there, we headed over to Jigsaw to see if the wind and high tide on Wednesday had overwashed T5 & T6’s nest. It had. Such a bummer. That was the last active nest and I’m not sure there will be any more. Most of the birds seem to have given up.

The wind was blowing from the west for a change which meant we needed to go around the bay in the opposite direction than we usually go so I headed back down the GIWW which brought us right by North Deer. Might as well check on those chicks while we’re there! YM & JH’s chick was making the cutest little hopping flights along the shoreline flapping its wings for all it was worth. Those primaries just aren’t quite grown in yet dude! The unbanded pair was sleeping behind the spartina with their chick and when we disturbed them, the chick ran for cover like it always does. A sure sign that it can’t fly yet. Hopefully by next week both of these chicks will be able to fly.

We motored down the GIWW stopping to check on ET & A8A and XE & unbanded on the way. They were both there but neither was up to any nesting activity so we continued on. I had hoped to see the West Bay mooring facility family so I could mark their chick as fledged but they weren’t there again. Sheesh. I hope somebody sees that chick somewhere so I know it made it. If anybody sees an oystercatcher banded U6Y let me know!

WT & unbanded were hanging out at Alligator Point clearly without a nest or chicks so we went out to the island. No oystercatchers and no skimmers so it was time to head across the bay to Bay Harbor. The skimmers there were all bunched up in a single area this time instead of spread out and yet again we did not see the oystercatchers that nest there.

We headed back up the bay and checked McAllistar Point. Newly banded C5A and his unbanded mate were nowhere to be found and there weren’t any skimmers there either. They were trying to nest on some low shells mounds and I’m sure they were all overwashed. The skimmers had all vacated Jumbilee Cove too but we found an unbanded pair of oystercatchers there. We haven’t seen any in that location this spring so I’m not sure if they were just wanderers or will stay there. 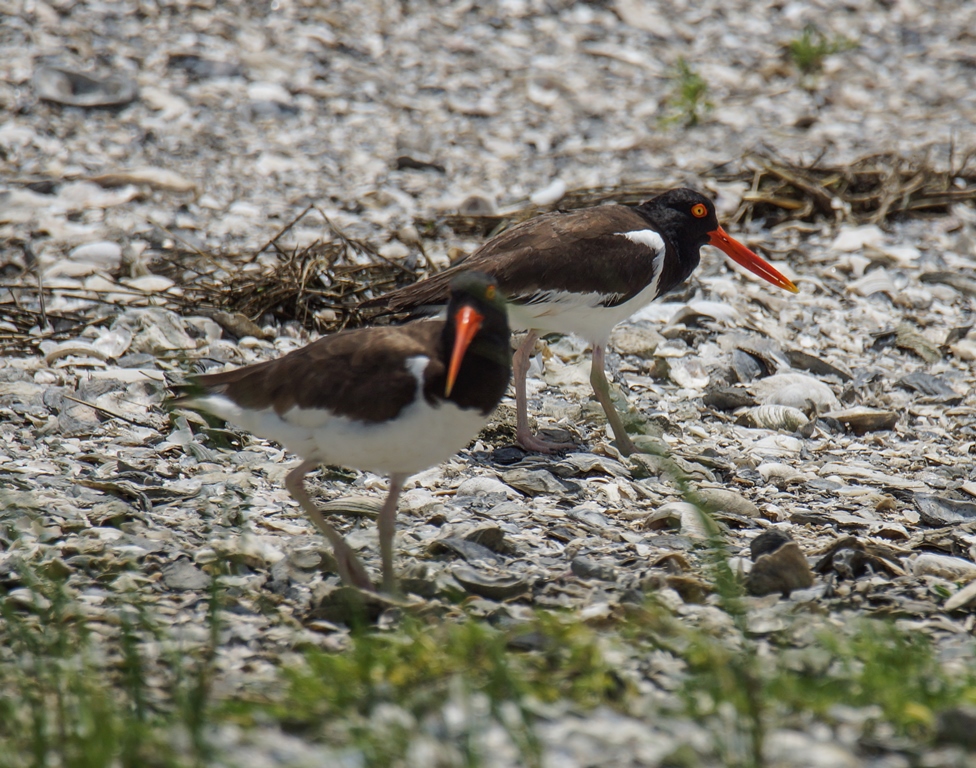 In Carancahua Bay we found another pair of oystercatchers (unbanded sadly) and saw that some of the skimmers there were still going strong. I videoed them and we headed for Gangs Bayou.

On Tuesday one of A4A & unbanded had been standing up on their shell bank and I wondered if they had a new nest but today they were both standing down by the water’s edge so if they have one, they aren’t incubating it which seems unlikely. We found E7 on the docks all by herself. Maybe she should team up with KK. They are both odd balls and maybe they’d do well together! 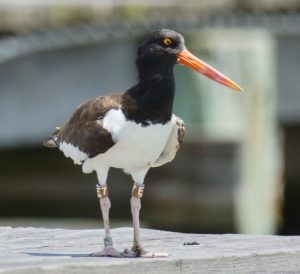