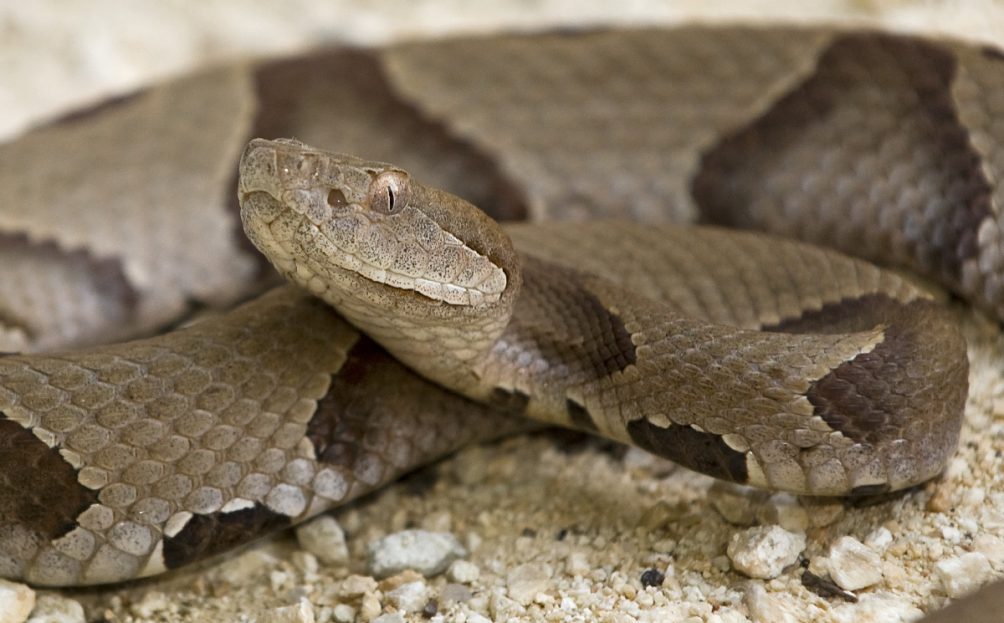 There is no group of organisms that elicits more varied reactions than that of snakes. Even the bravest, animal-loving individuals may squeal or jump at the sight of one of these scaly critters. Our fear response to seeing a snake can’t be helped. We are taught from a young age that snakes are dangerous and our brains are hard-wired to instinctively respond to anything that shares their elongated shape, such as a stick or a garden hose. Many people have stories of encounters with snakes in their houses, in their back yards, or while doing various extracurricular activities. It is understandable and smart to be wary of snakes, especially if you aren’t sure what species you are dealing with and whether or not a snake is venomous. I have heard many people say that the only good snake is a dead snake, but that is not always the case. Snakes are actually very good for the environment and are an important part of every food web. Here in Texas, we have many species of snakes, with only four being venomous: rattlesnakes, coral snakes, copperheads, and water moccasins. If you learn how to identify these four species, where you are most likely to find them, and how to behave around them, then everyone will be safer for it.

I have had my own fair share of snake encounters over the past few years, with those numbers increasing recently as I’ve carried out more field work. It is always a nerve-wracking experience to suddenly stumble upon a snake. Many people need to understand that snakes can be found just about anywhere, so it is good to be aware of your surroundings.  The majority of snake bites occur when someone is not paying attention to where they are walking or when they try to move a snake. If you are out hiking or walking in an area with tall grass, it is highly recommended that you wear close-toed shoes, long pants, and watch where you step. Unfortunately, as humans develop more land, snake and human encounters will increase. We can not blame snakes for winding up in our homes or back yards, and the best option is to either leave them alone or contact a professional before dealing with the animal yourself.

Of the four venomous species in Texas, only the water moccasin tends to be aggressive. The others will usually not bite unless stepped on or picked up and will tend to avoid humans. It is not always easy to identify venomous snakes, but two common characteristics between rattlesnakes, copperheads, and water moccasins are triangular heads and vertically slit pupils. Coral snakes are the only oddballs, but their distinct red, black, and yellow coloration should be a dead giveaway. It is highly unlikely, but if you are bitten by one of these venomous snakes, remain calm, try to take a photo of the snake, and do not attempt to suck out the venom. This does not work and may cause the venom to spread faster. Likewise, never try to treat a snake bite at home! You should always go to the hospital, even if you are sure that the snake was non-venomous. Bites like these can become infected if left untreated. While some people may see snakes as nothing but pests, many snakes, including the venomous ones, are very beneficial to society. They keep rodent populations low, which in turn reduces the spread of ticks and certain diseases. Some species, such as kingsnakes and indigo snakes actually eat venomous snakes! As stress-inducing as it can be, it is best to be thoughtful when encountering any snake, as they are often much more afraid of us than we are of them.