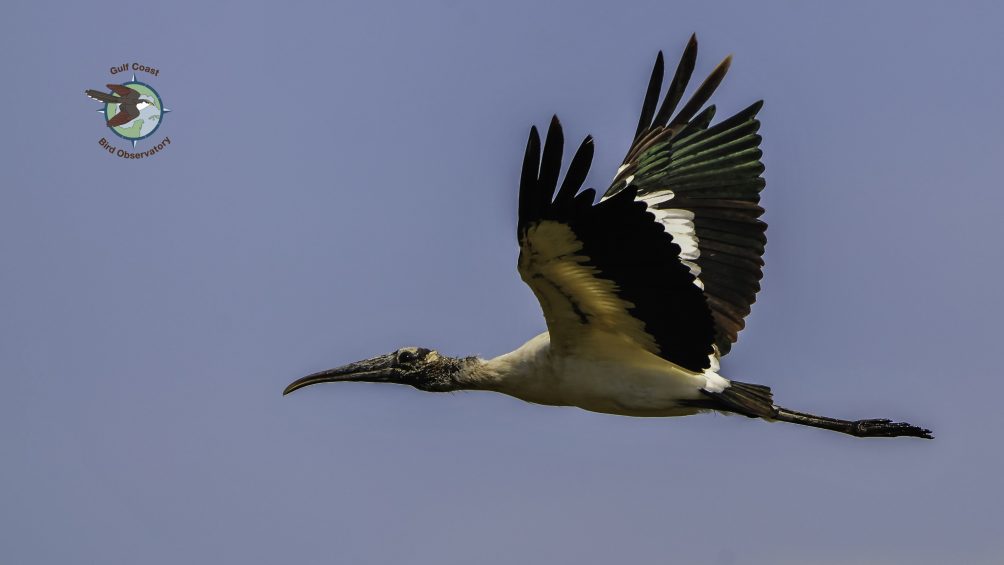 Wood Stork (Mycteria americana) is uncommon to locally common post breeding summer visitor to the Texas coast and inland to the eastern third of the state. West of the I-35 corridor, they are very rare due to the lack of wetland areas. A few may stay the winter in the South Texas Brush country. Half a century ago, Wood Storks nested in Chambers, Harris, and Jefferson counties, but this no longer occurs. The Wood Storks in Texas are the result of post breeding dispersal from the population in Mexico. They begin to arrive in Texas as early as May in search of drying up ponds and lakes and continue through October until the rainy season in the tropics is over. In the United States, Wood Storks are found predominantly in the southeastern states and breed in Florida, South Carolina, and Georgia. They do wander however, with scattered records across the lower 48 states with even a few records in Canada. Worldwide their range includes Central American and much of South America. Wood Storks breed in fresh and brackish forested wet-lands. They forage in open wetlands, swamps, ponds, and marshes with water depths of 12 inch-es or less. They slowly walk through wetlands with their long, hefty bill in the water feeling for fish and crustaceans. Storks roost in trees along the water’s edge. Wood Storks are social birds that forage in groups and nest in colonies with egrets and herons. Small groups of storks foraging in wetlands frequently follow each other one by one in a line.

Wood Stork is a member of the Ciconiidae Family (Storks) and is one of two stork species in the American Birding Association area. They are a large wading bird and are identified by their overall white body with a dark gray featherless neck and head. The bill is quite large and de-curved. The flight feathers and tail are black and most noticeable in flight. The legs are dark gray with either yellow or black feet. They have a rather large wingspan at five feet and stand three and a half feet high. Juveniles are very similar to adults with the neck and cap being white and a yellow bill. Their typical weight is 5 to 6 pounds. They are usually silent except around the nest, but will emit a low croak. Young make a clattering noise with their bill.

– Wood storks have been recorded flying as high as 6000 feet and will fly up to 50 miles in a day in search of food.

– Kids love water parks when it gets hot outside. Nestling birds don’t really have that option, but to keep nestlings cool, Wood Stork parents regurgitate water over the nestlings. Maybe not as fun as a water park, but it does the trick.

– They nest above water to avoid predators such as raccoons from feeding on their eggs and young.

– The oldest recorded Wood Stork was at least 20 years, 2 months old. It was banded in Georgia in 1994 and was identified by its band in the wild in South Carolina in 2014.