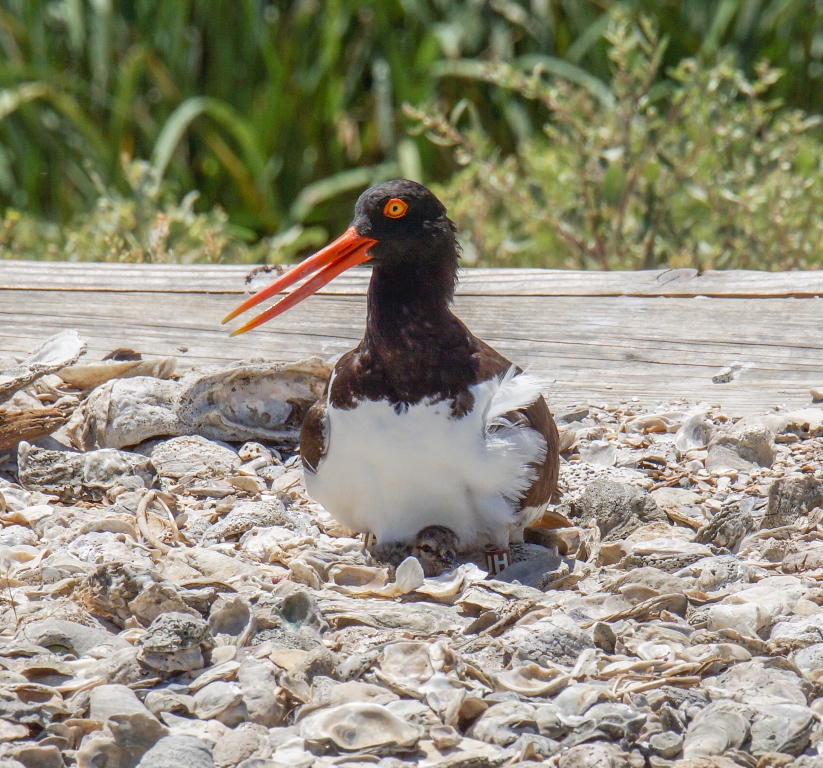 Taylor, Morgan, and I went out to Bastrop and Drum Bays to check and see if there was any action there early in the week. I had hoped to see JK’s chick again (W7W) but the whole family was gone. The tide was high and they were probably on the beach. The only oystercatchers we saw in fact were J0 & 38 who were hanging out on a shell spit near mouth of Bastrop Bay. Similar to East Matagorda Bay, I guess the oystercatcher season is over there.

That isn’t the case in West Galveston Bay though. The north wind this week made for an interesting trip to Swan Lake! Alan and I headed up there first thing to see if LR & unbanded’s chicks had made it. We checked on 20 & unbanded on the way up there and found to our surprise six adult oystercatchers on their island! It was too windy to go and see if they still had a nest so we’ll have to check it next week. When we got to LR & unbanded’s island we didn’t see any oystercatchers. We went to the far end and when we looked back to the other end where they have been hanging out I saw an adult pop up on the shell ridge. Aha! Then I saw two chicks pop up and I knew we were in business. We motored back to that end of the island where we could get a little out of the wind and then watched. Suddenly the third chick popped its head up and when it saw us, it took off and made a short flight down the island! Woohoo! When the other two chicks saw that I guess they didn’t want to be outdone because they both took off as well and flew down the island to where the first chick had gone. They were all short flights but that’s a great start! That is the third pair that has fledged three chicks this year. That is unprecedented in 10 years of monitoring. Nice!

In Swan Lake the only oystercatcher we saw at first was K7 who was hanging out in his territory alone. No wife, no chick. We went around to the backside of the island to see if they were there and the female flew in from somewhere but no chick came with her. I suspect it was there somewhere but just didn’t want to be seen. It can probably fly well by now though so it could have been off on its own exploring too. We didn’t see anybody else so we headed back across the bay. It was rough getting back and I watched the railroad bridge the whole way hoping it would stay open so we didn’t have to sit on the rocking bay waiting. Sadly just as we were getting close it started going down! Do they plan these things just to watch us bob around like a cork?! It did actually seem like they stopped it going down for a bit. Maybe they saw us and were waiting to see if we could get under in time but I couldn’t go any faster because it was just too rough to do so and the train was coming so they had to put it all the way down. So we bobbed around for a bit waiting. Fortunately it was a short train and they didn’t wait very long before they started putting the bridge back up. Phew. I was glad that was over!

We headed to Struve to check on all the chicks. At first we only saw 12 with two chicks but later we saw all three were there. The unbanded pair was in their territory but their chick was not with them again and we didn’t see it with any of the other pairs like we did last week. Drat. I am not sure a chick that just fledged a week or two ago can feed itself sufficiently to stay alive. We can always hope though. LT & JA were on a dock with all three of their chicks making a nice family portrait.

HM was flying around causing trouble again but his mate X7 was on the island with both of their chicks. Like I said last time – calm down HM! Your chicks can fly now. They are fine. We noticed a couple of skimmer chicks, the first we’ve seen so far this year. 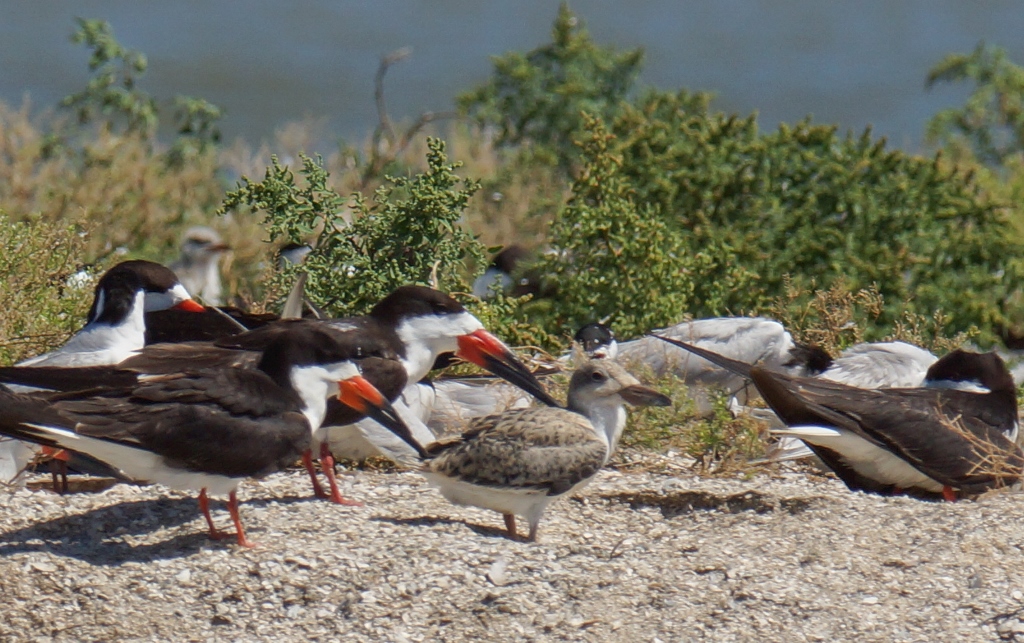 We headed over to Jigsaw and found LH & T6 still hanging around up by the vegetation. Alan and I agree they wouldn’t be doing that if they didn’t have a chick up there. I do wish I knew if they had more than one though. Next week it will be time to band it or them and I would like to know how many before I go looking. Maybe by next week they’ll be out in the open and we can get some info before we go chasing them down. It was time for YE & unbanded’s nest to be hatched and sure enough we saw them with a small chick on the shoreline. I had joked with Alan earlier as to whether they were actually incubating their nest because we never saw them on it but it seems clear they were! 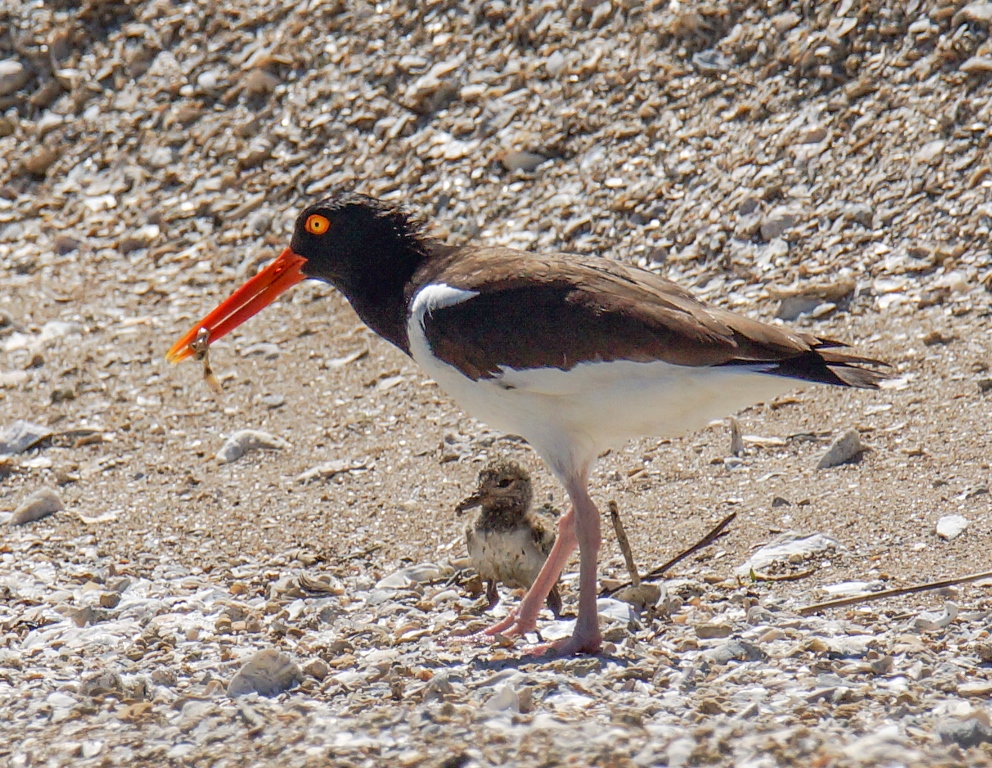 We moved on to the Galveston Island shoreline to look for 16. When we saw this we thought we had found him and he wasn’t alone. 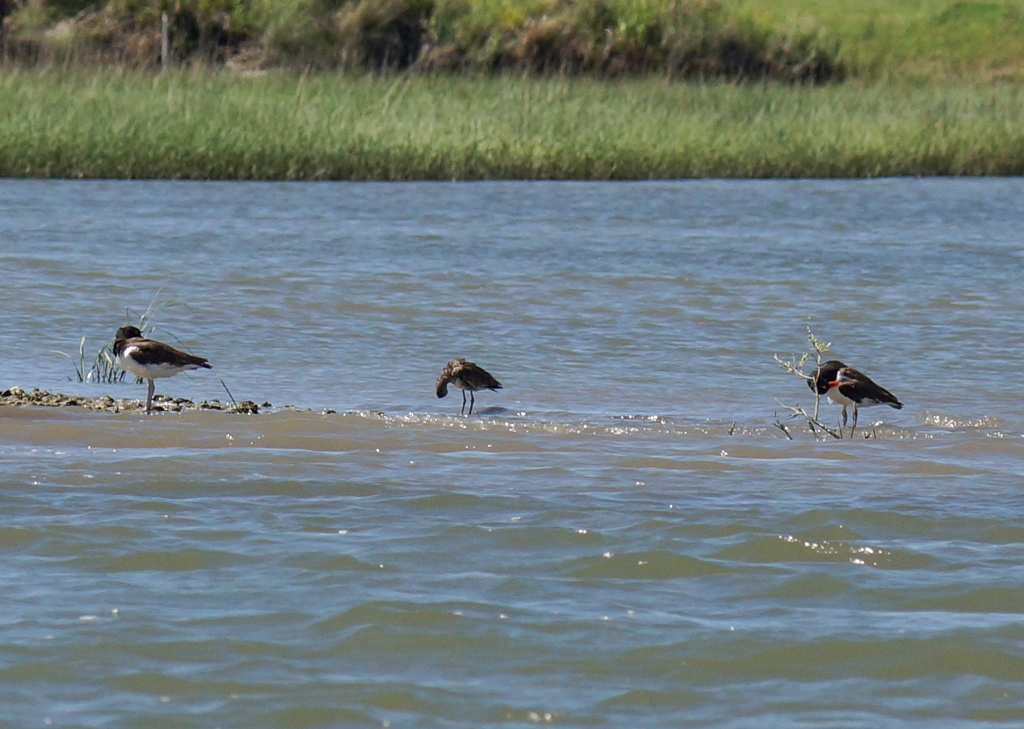 But sadly Alan’s photos revealed that was YK not 16 so we didn’t see 16 at all. We haven’t seen YK in a while either. Wonder where he’s been? YK was banded as a chick in 2014 just south of Swan Lake and defended a couple of different territories in that area for a few years when it reached adulthood but we haven’t seen it in recent years.

We also spotted an unbanded pair on the weird road end that sticks out in the bay from 8 Mile Road. Then we headed over to South Deer where strange things have been happening all season. F1A was out on a reef and E2A was on the island in the same spot we saw them last week so I hoped it was guarding a chick but when I went to look it flew off without a peep so that seems unlikely. Dang.

Y7 & unbanded were back on their beach but when we approached they flew off without a second thought so clearly there was nothing happening there. We also found a single unbanded bird around the other side of the island close to where we saw a single unbanded bird a few weeks ago. What’s up with that? Scouting around for a territory for next year? If so, I’ve got some jewelry for you!

At Gangs Bayou, A1A & unbanded were holding vigil in their same spot on the breakwater. A4A was up on a shell ridge and its mate was incubating their egg. Good job you two! Keep up the good work. 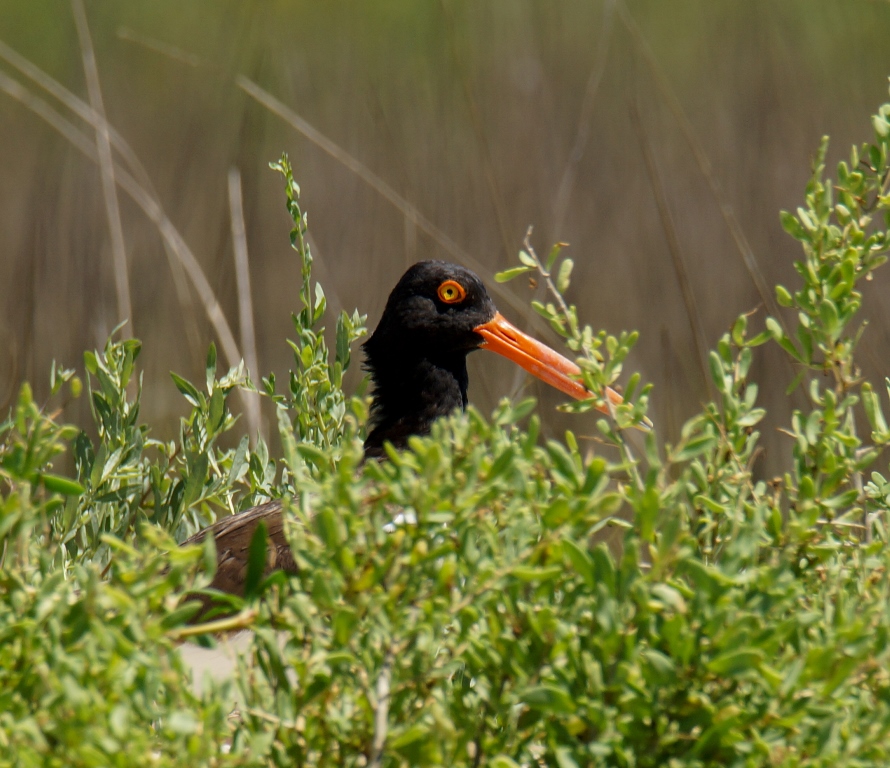 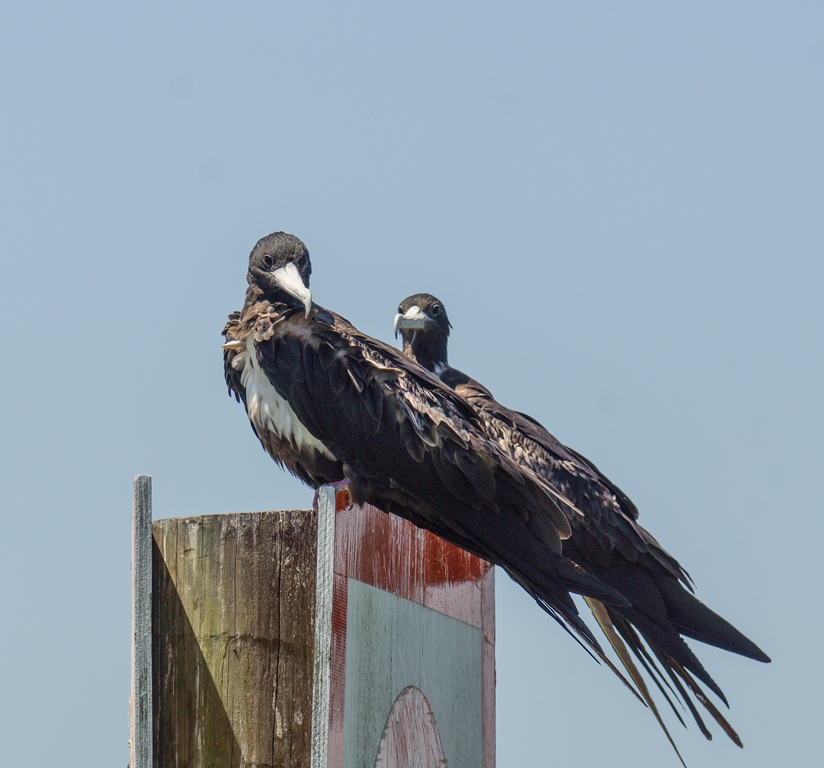 Finally on the third shell marker sign we found five Brown Boobies, down from seven the last few weeks. I sure wish I knew what was happening with them. I think it was last June that someone reported one on these signs and they’ve been increasing ever since.

Alan feared the F9A & unbanded’s nest had overwashed in the high tide from Tropical Storm Cristobal and he was correct. They adults were nowhere to be found. They’ve had a tough go of it. Better news on North Deer though. JH was protecting a small chick! YM was farther down the shore feeding. I hope they can protect this chick from the pelicans.

C1A & unbanded and E6A & unbanded were not home so we continued on. I had hoped to see the miracle chicks of J6 & UF but they weren’t on their island. After much discussion and thought we decided they must have gotten the chicks to swim to the backside of Marker 52. There is a lot of food there and we wouldn’t have seen them. Dang these birds are smart!

JJ & P4 were hanging out near where their nest had been. I wonder what happened to their chicks when it hatched? Why did they disappear for two weeks? I really wish they could just tell me. It would make things so much easier.

JC was incubating her egg but she was sitting funny and I wondered if instead it was a chick so we moved in a little closer. This caused several pelicans to begin waddling by the nest and JC went nuts attacking them! She tried to stab one of them with her bill. When that didn’t work she tried the broken wing display. Get out of the way you silly pelican! Thankfully the egg was fine after the pelicans made their way by. 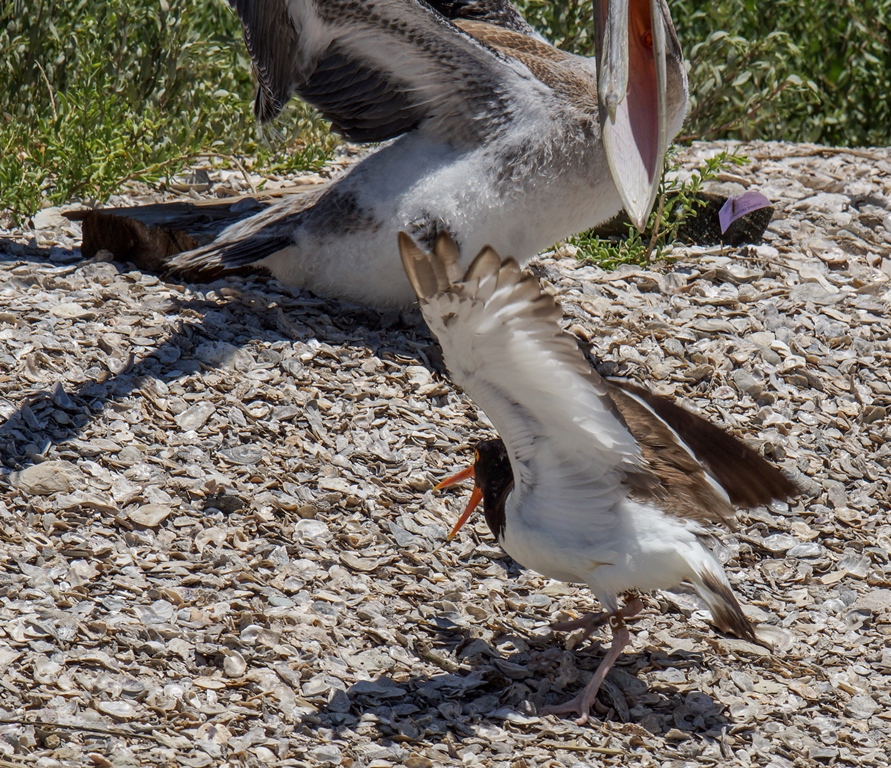 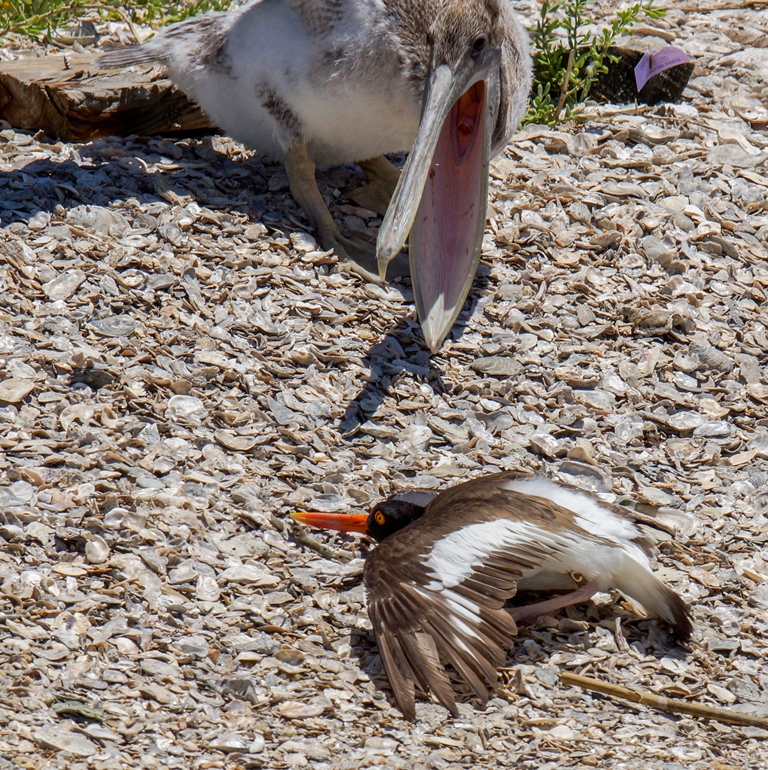 We headed down to the cut through to Jones Bay and discovered an oystercatcher on the reef there. FR(ed) was back! No sign of the missus and the kids but it was so good to see him. He is such a character. He couldn’t just let us pass by without expressing some discontent though and he flew down to his part of the island. Go for it Fred. You’ve got cause to be proud! 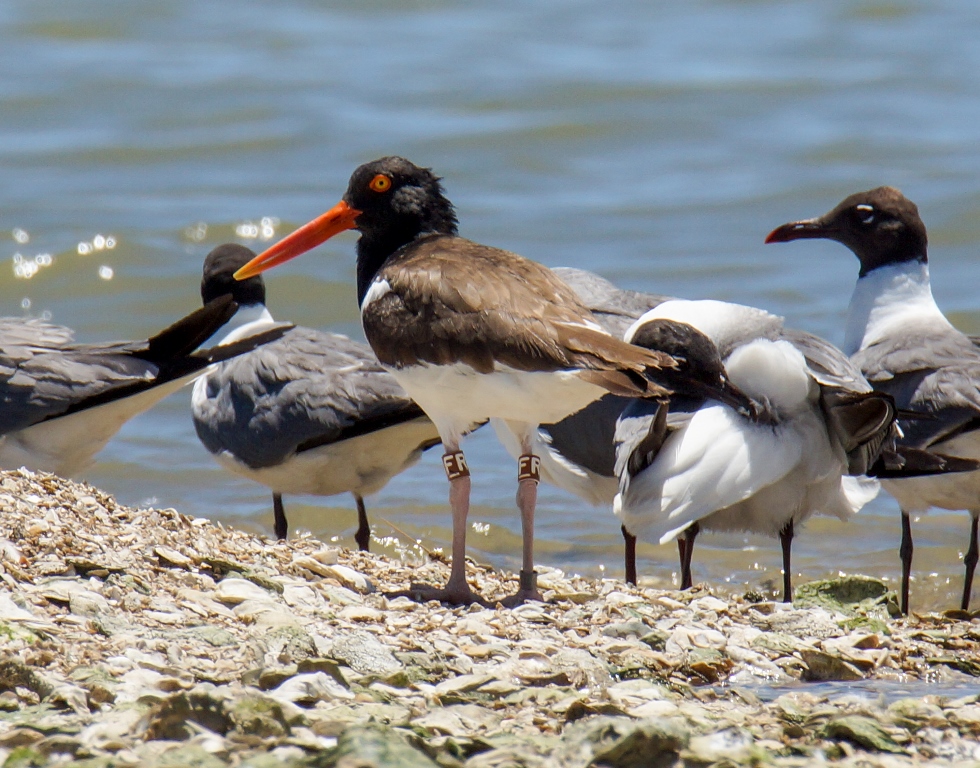 I headed over to the Tiki Spoil breakwater so we could spy on CA & Y2 from the backside of their island but when we got over there, CA flew in, landed on the breakwater, and issued a triple alarm call! That is a call they only make when they have a chick so that was good news. The chick was still alive! 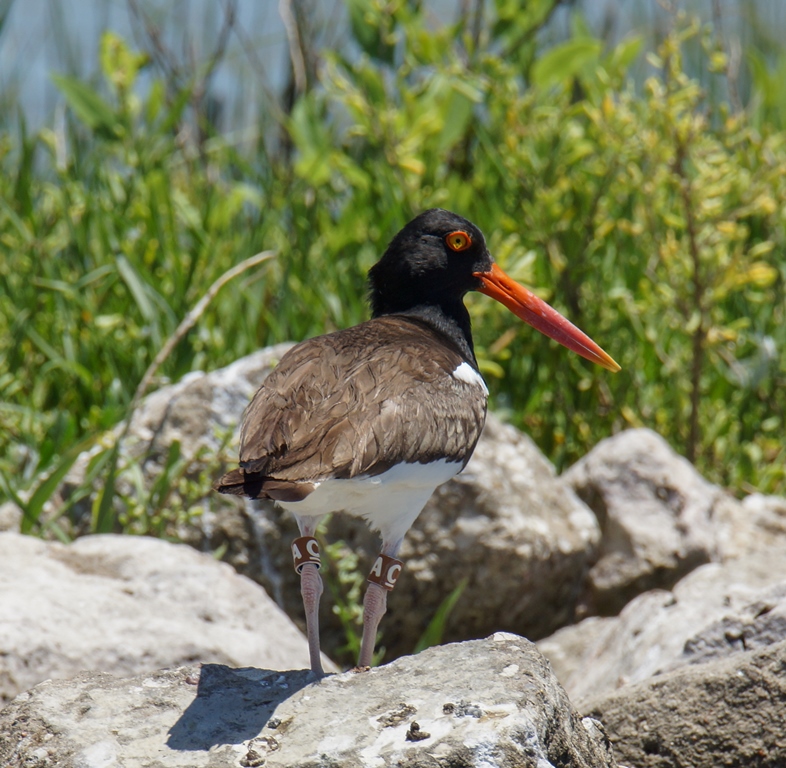 We didn’t see Y2 anywhere though so we motored over nearer the island. Still no Y2. I was wondering if somehow the chick had ended up on the Tiki Spoil with the high tides and Y2 was hiding over there somewhere protecting it so we went back over there. Then we saw Y2 nonchalantly feeding on the backside of the island. Sneaky, sneaky but we know your secret! 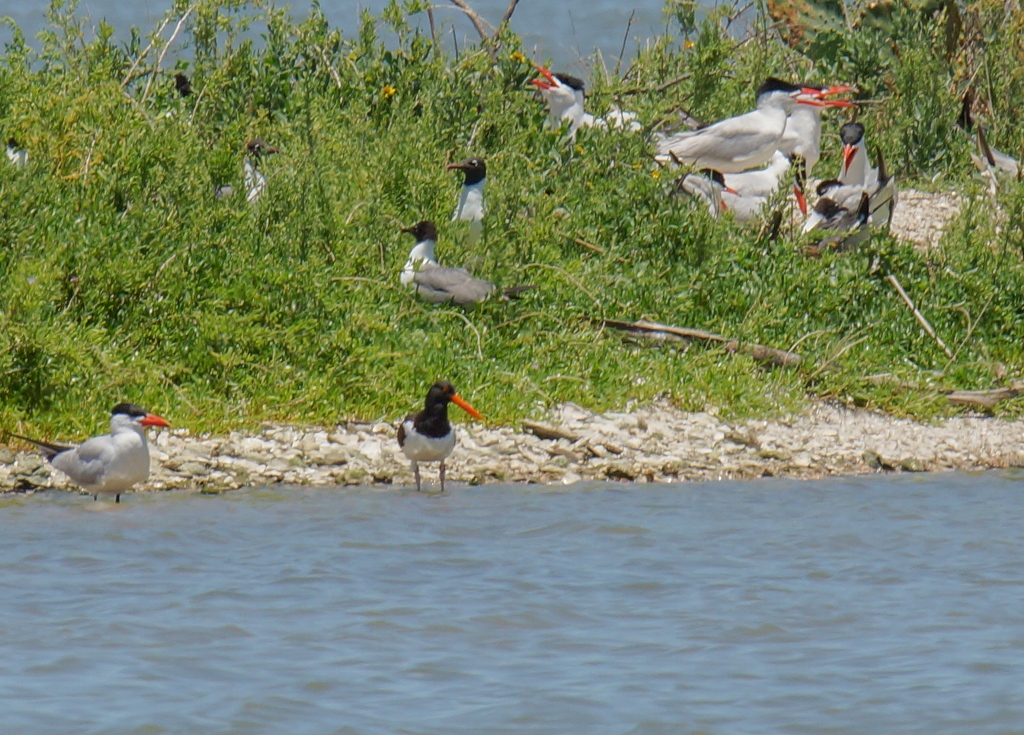 So that was the end of another exciting week with the oystercatchers. Stay tuned for more adventures next week.