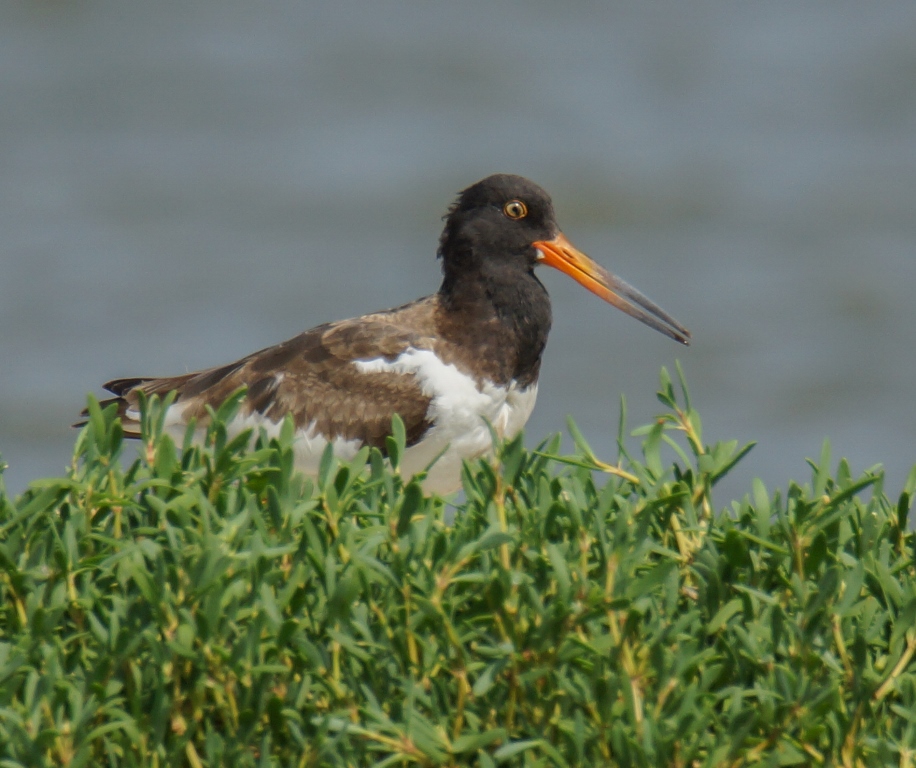 Alan, Taylor, Morgan and I headed out to West Galveston Bay last Wednesday for a last check of the oystercatchers. It was pretty calm so we headed towards Swan Lake. On the way out the Tiki Channel we found E0A & C2A the pair that tried nesting on a tiny island along the channel last year. They always got overwashed so this year they tried nesting at Virginia Point just north of I-45. Sadly, they got overwashed there too and we hadn’t seen them since. Perhaps they tried nesting in some other location that we weren’t aware of. If so, they likely weren’t successful because they didn’t have a chick with them. Sorry guys. Better luck next year.

We went under the railroad bridge and headed up the bay. There weren’t any oystercatchers at Zimmerman Point so we went to the Malone area to see if we could get one last look at the triplets. Sadly no one was home so we continued into Swan Lake. Once we got into the lake, Alan looked back at Malone and discovered there were some birds on the breakwater near there so we decided to check them on our way out. We found all the pairs in Swan Lake except 39 & unbanded. K7 & unbanded no longer had their chick in tow so I guess it is on its own now. We went back to Malone and found that LR & unbanded were indeed on the breakwater but they only had one chick with them (W8W). 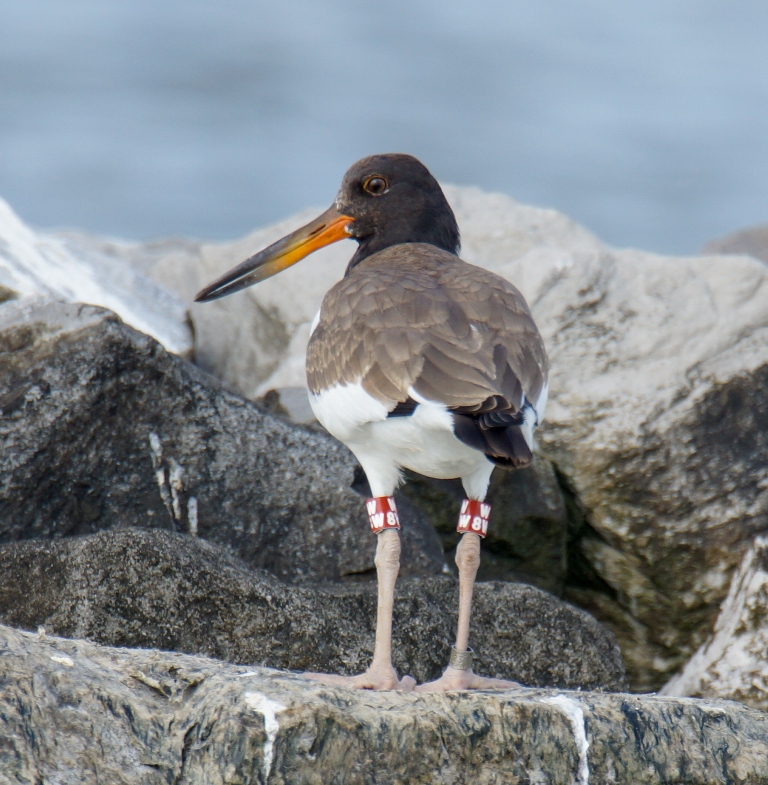 Dang. I wanted to see trio again but that’s the way it goes. They grow up and they leave home! I’m sure LR & unbanded are happy to see them go. Raising three chicks is a lot of work for an oystercatcher pair. We headed back down to West Galveston Bay and amazingly the railroad bridge stayed up. Of course it did! There wasn’t much wind and we weren’t bobbing around like a cork!

We headed to Struve Luci and found all the pairs in their appointed spots. Most of the chicks were gone but each pair that had chicks had one chick with them. U8X was with LT & JA, U7Y was with 12 & unbanded and U8W was with HM & X7. These new bands codes are murderous. I’ll never remember them! My brain can handle the two character codes but the three character codes are just too difficult! 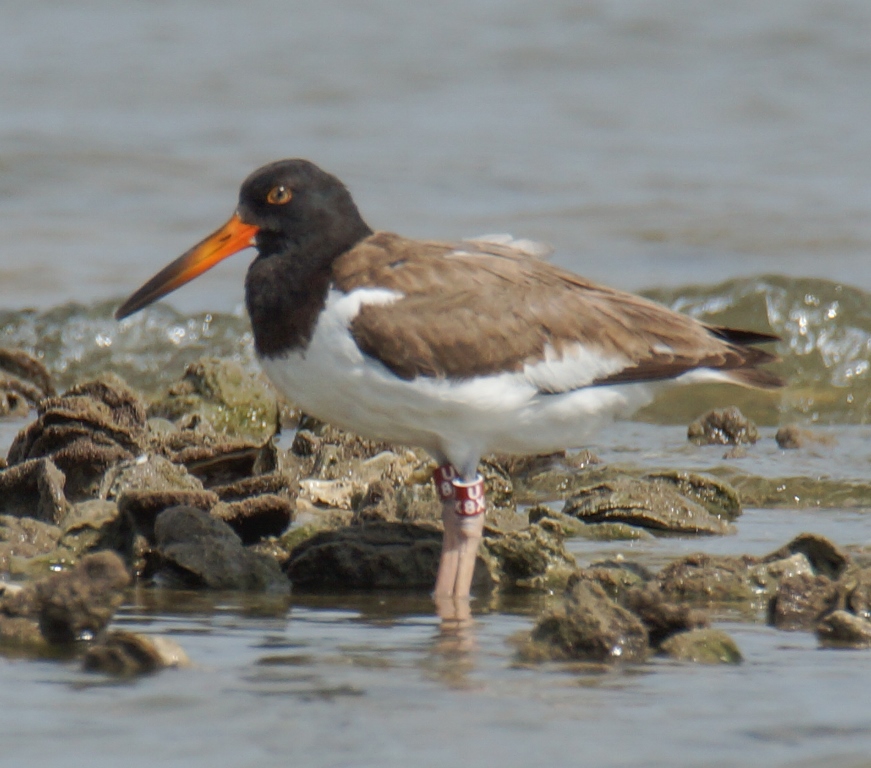 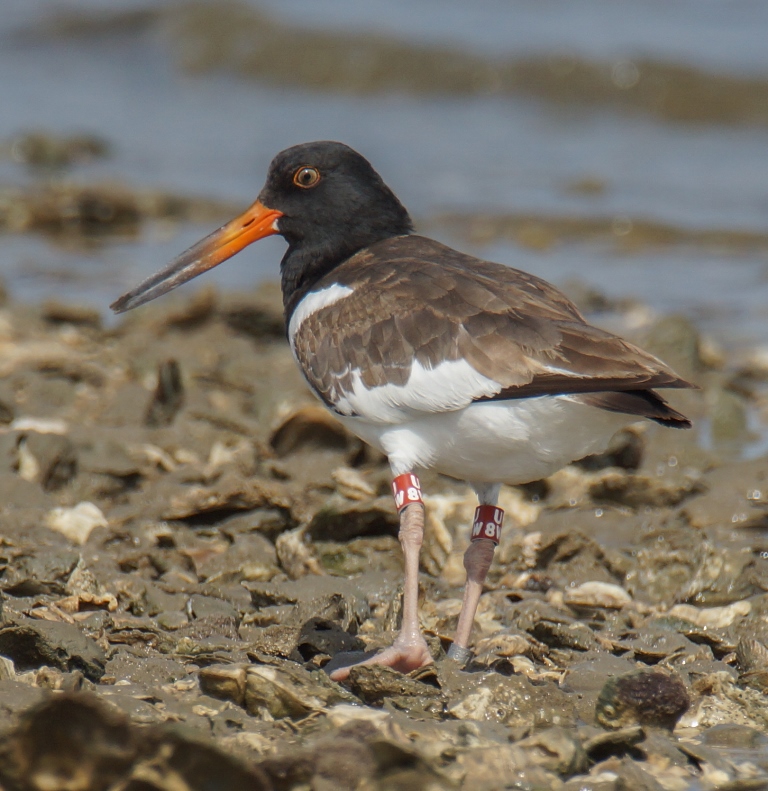 I videoed the skimmers and we discovered some small chicks. Alan snapped a few photos from the boat. 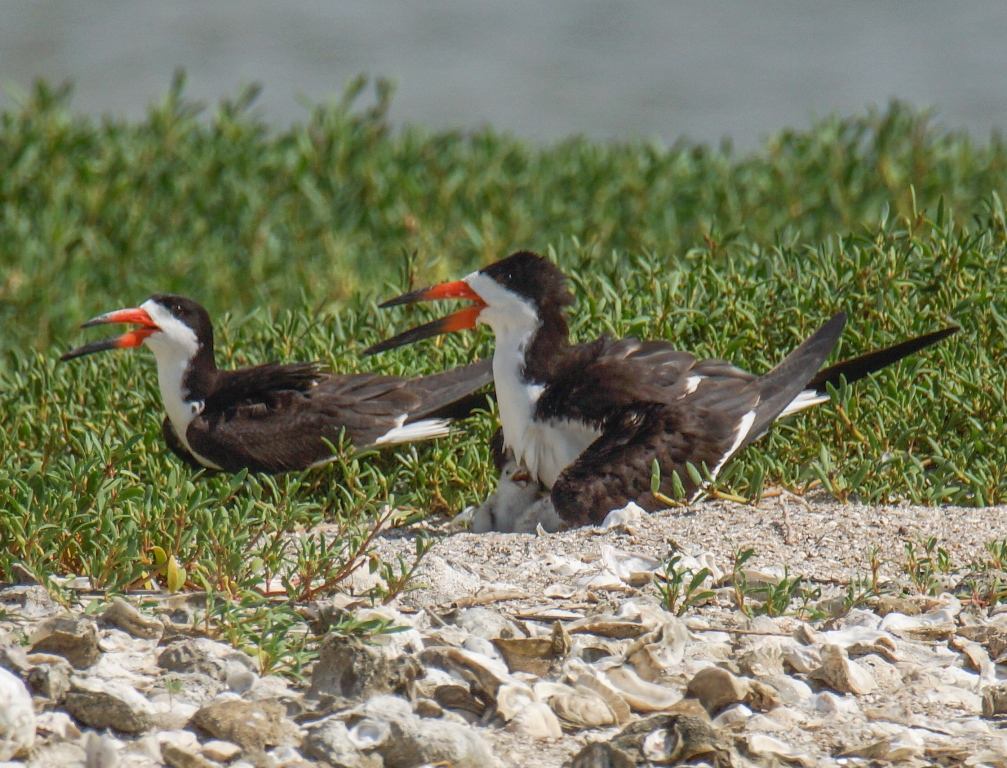 We moved on to Jigsaw and found LH & T6 and YE & unbanded both on their respective reefs. Boring! Moving on to the Galveston shoreline we found YK with both an unbanded bird and U6W. Hum. It takes two to tango but three? Not sure what’s happening there. 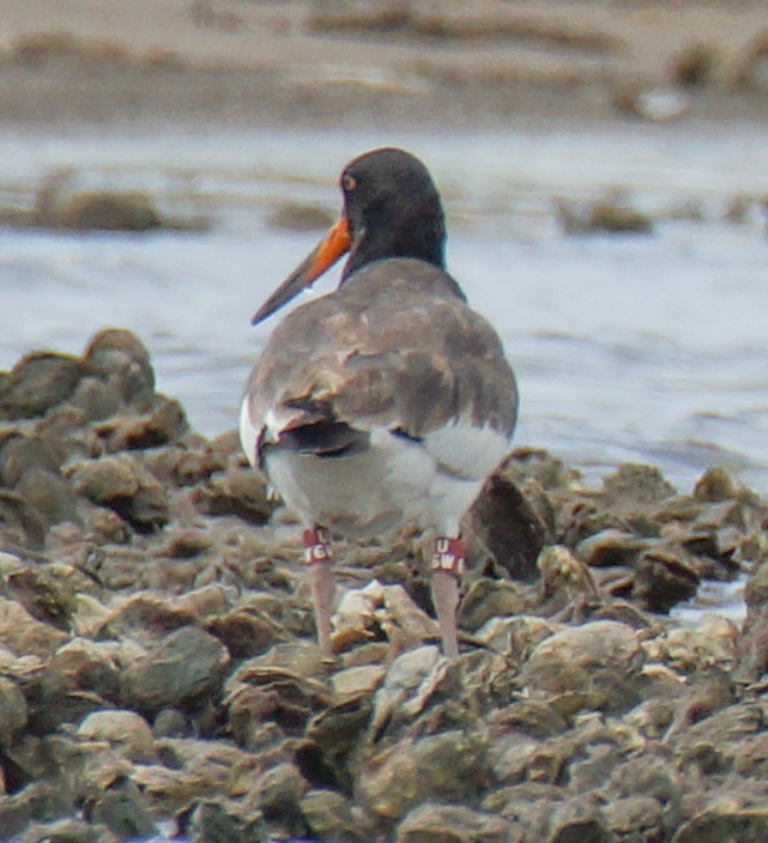 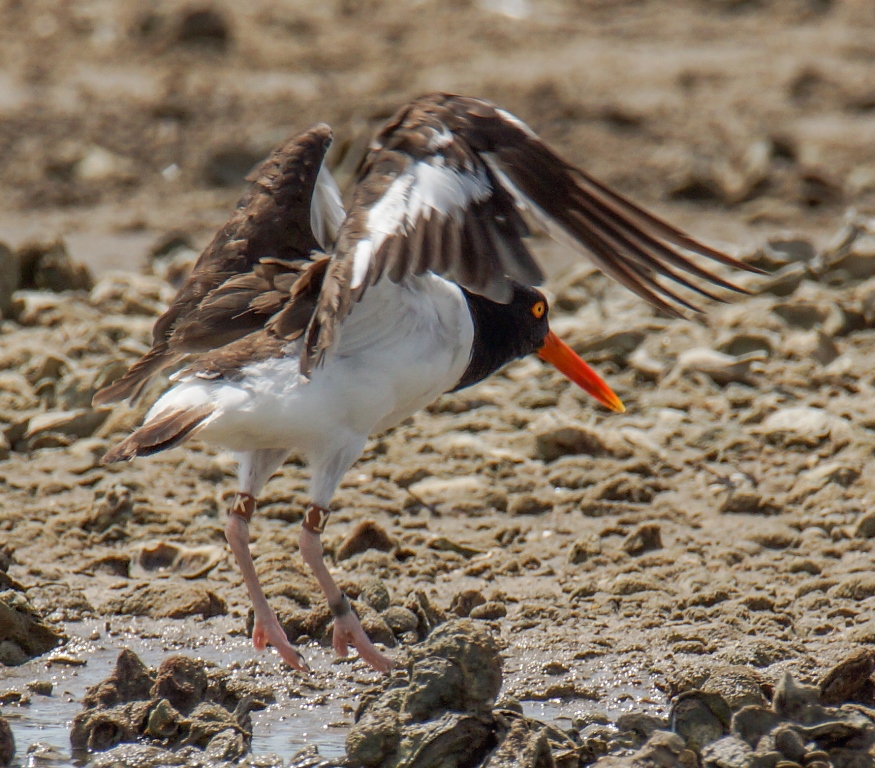 We headed to South Deer and found another change up. F1A was in his usual spot and we found W4U on the reef nearby. As we had noticed in weeks past, F1A’s former mate E2A was roaming around and I suspected looking for another mate. It appears F1A has decided that W4U is a good replacement for her. W4U was hatched in 2018 on an island in Jones Bay and is P3’s last chick. P3 was a favorite of mine. He disappeared last year and I still think of him when we pass by his island to check on the new residents. Sad. Happy to see his progeny faring well though.

There weren’t any other oystercatchers on South Deer until we got around to the other side where we found A5A & unbanded in their usual spot. The tide was low so I decided to check Confederate Reef for birds. There we found U7X which is K7 & unbanded’s chick from this year (Swan Lake). I guess that little dude is definitely off on its own as it was kind of far from home. 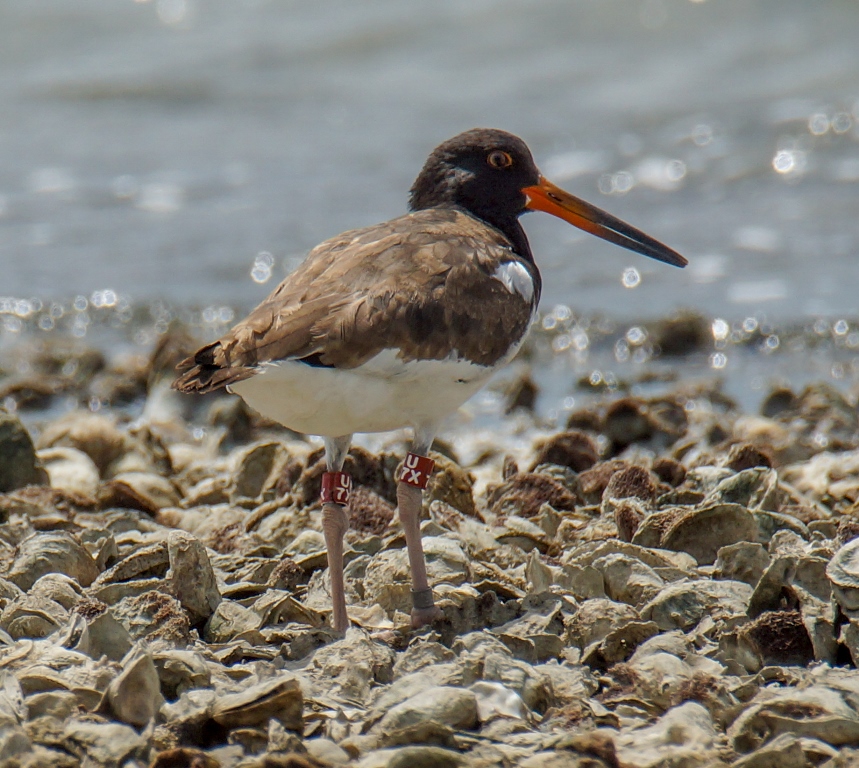 We checked the docks for 16 but didn’t find him. I fear that 16 may have left the area. I guess we’ll find out next year when the breeding season starts again. At Gangs Bayou A1A & unbanded were in their usual spot and so was A4A & unbanded. Nothing exciting there so we headed across the bay to check on the Brown Boobies. We didn’t check on them last week.

This week we found five on shell marker A and four more on shell marker B. A new record! Morgan suggested they may be multiplying by budding since the bulk of the time we only see them sitting on the shell marker signs doing pretty much nothing! Haha! Good one Morgan. The first Brown Booby appeared here in June 2019 and the number has been growing ever since. Surely they will start trying to breed at some point. Now that will be exciting!

We motored over to the GIWW and checked a few of the reefs by Harbor Walk. We found A5A & unbanded again (they get around!) and also W1W and the bird with fishing line around its foot. Dang that looks painful. 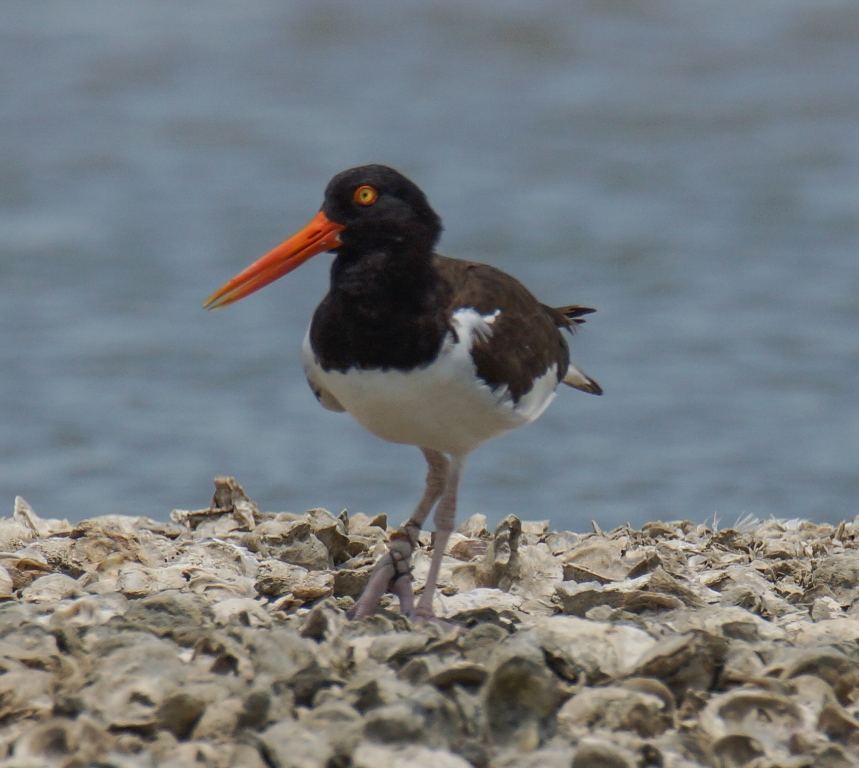 I had the net gun with me but there was no way to get close enough to try to catch it. Such a bummer.

Then we went to North Deer to check on YM & JH. One of them was on the breakwater where we found them last week but it flew over to their beach and joined the other one when we got close. They didn’t have a chick with them so I guess it didn’t make it. Bummer. That was the last chick of the year. We went to see if J6 & UF and the miracle chicks were home but we found UF by herself. No last look at them either.

We motored down the length of Marker 52 and found W5 & JC hanging out on a reef. FR & unbanded flew when we got near them and they didn’t have their chicks with them anymore. All the chicks are leaving home!

So we headed over for the last task of the day which was checking to see if CA & Y2’s chick W6W could fly yet. When we got there we saw the chick on the island with Y2. I let the boat slowly drift towards them and when Y2 took off, W6W followed! We all gave a cheer and a fisherman in a nearby boat thought we were cheering for him because we all turned in unison to watch the chick fly by and ended up looking straight at him. Sorry dude! We aren’t cheering for your fishing prowess or lack thereof. He had no idea! Pretty funny.

So that was the end of that and the end of another season with the oystercatchers. Despite the problems with getting out due to the pandemic we had a pretty good year. Twenty-two chicks fledged giving a productivity of .58 which is a little better than average. The bigger news is that three pairs fledged three chicks which is unprecedented in my experience.  Thanks so much to everyone who supported this project this year. We have a new oystercatcher t-shirt available at the GCBO online store so check it out! 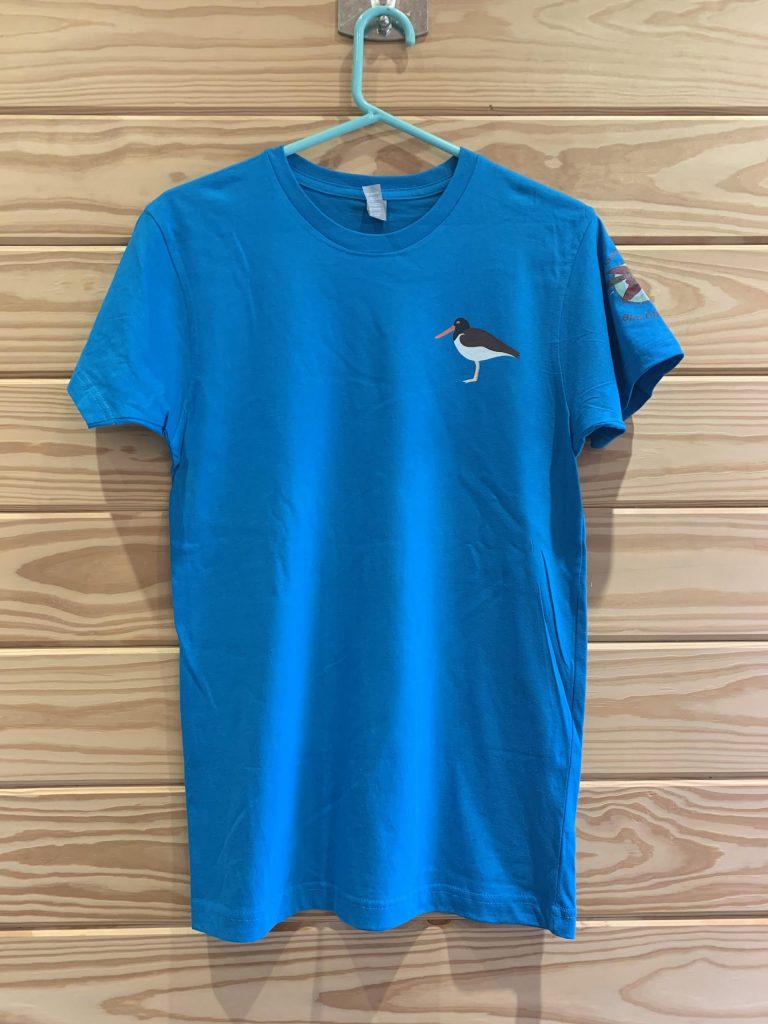 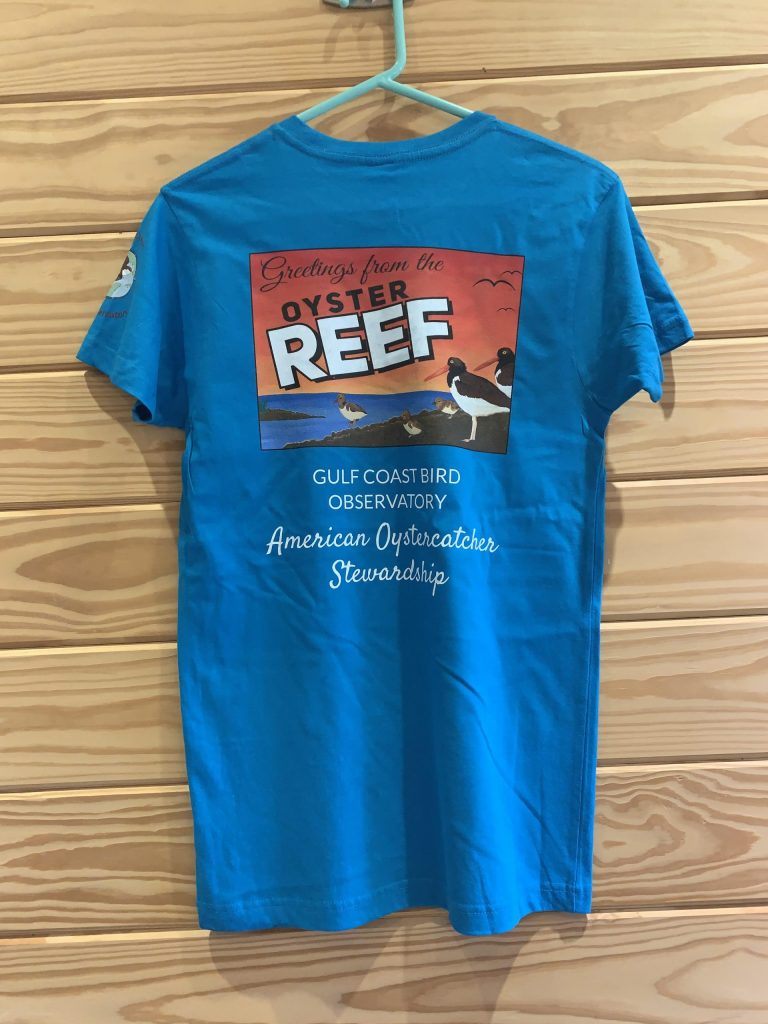 I wore mine this weekend. The fabric is really soft and it’s a lightweight shirt so not too hot in the Texas heat. Love the color too! You can get yours here.