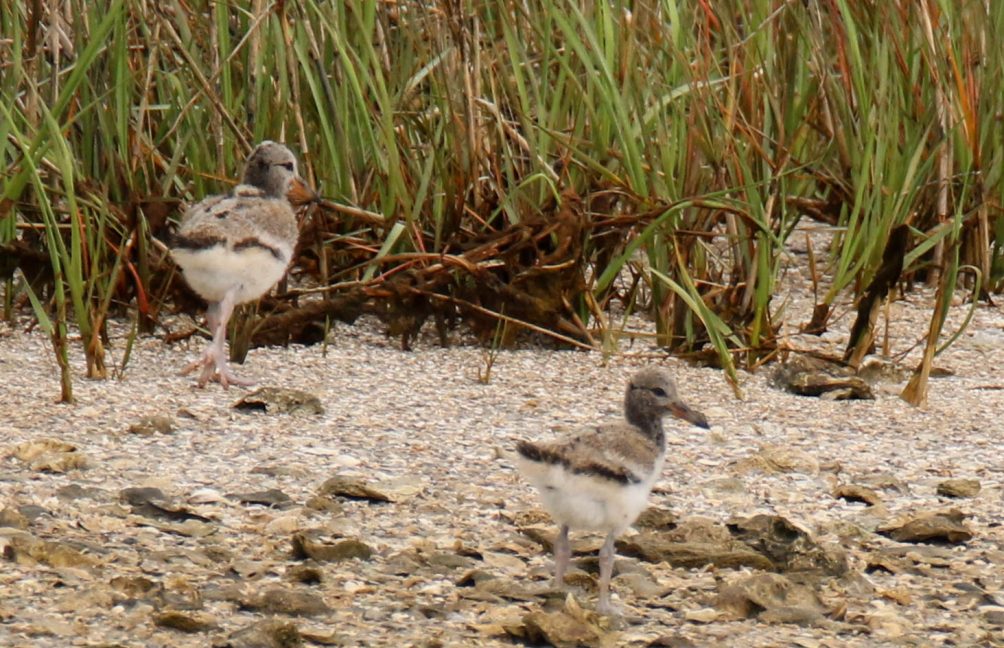 Well the wind was not our friend last Thursday. Remember when I said we’d pay for the good weather last week. Well, it didn’t take long. We were unable to go to Swan Lake because it was just too windy so we opted to survey some additional areas in West Galveston Bay where we could be protected from the wind. We started by heading to Jones Bay. The newly minted E1A & unbanded were huddled on a small section of their island staying away from this:

Go north white pelicans! We need you to leave please. We tried to spy on FR & unbanded from afar to see if we could get a glimpse of their chicks but it was not to be. They spotted us immediately and that was the end of that. FR escorted us the rest of the way around his territory until we were a good bit away. Someday we will see those chicks! I was happy to discover that CA & Y2 had added two eggs so now they have three total. Good work! Some Laughing Gulls had arrived and soon they will be nesting so I hope the oystercatchers can keep their eggs and chicks safe from those hungry mouths. 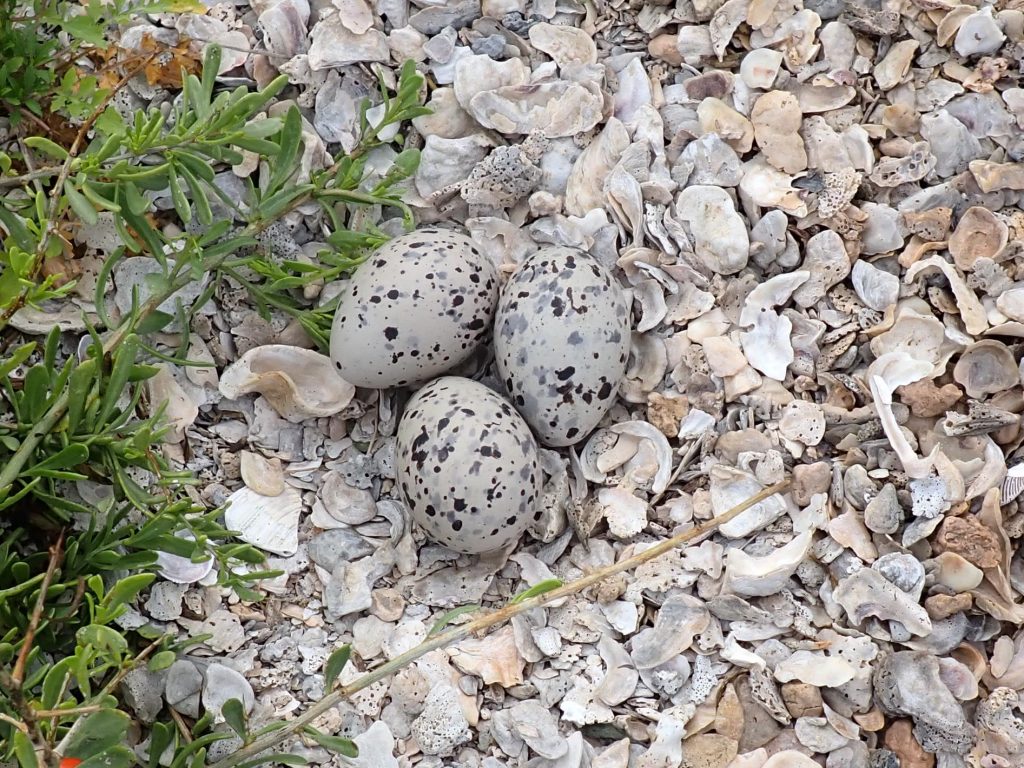 We headed out into the GIWW and ran the length of Marker 52. FR escorted us again! We found W5 feeding on a reefy area between his territory and FR’s. JC was incubating the nest which also now had three eggs. Yay! 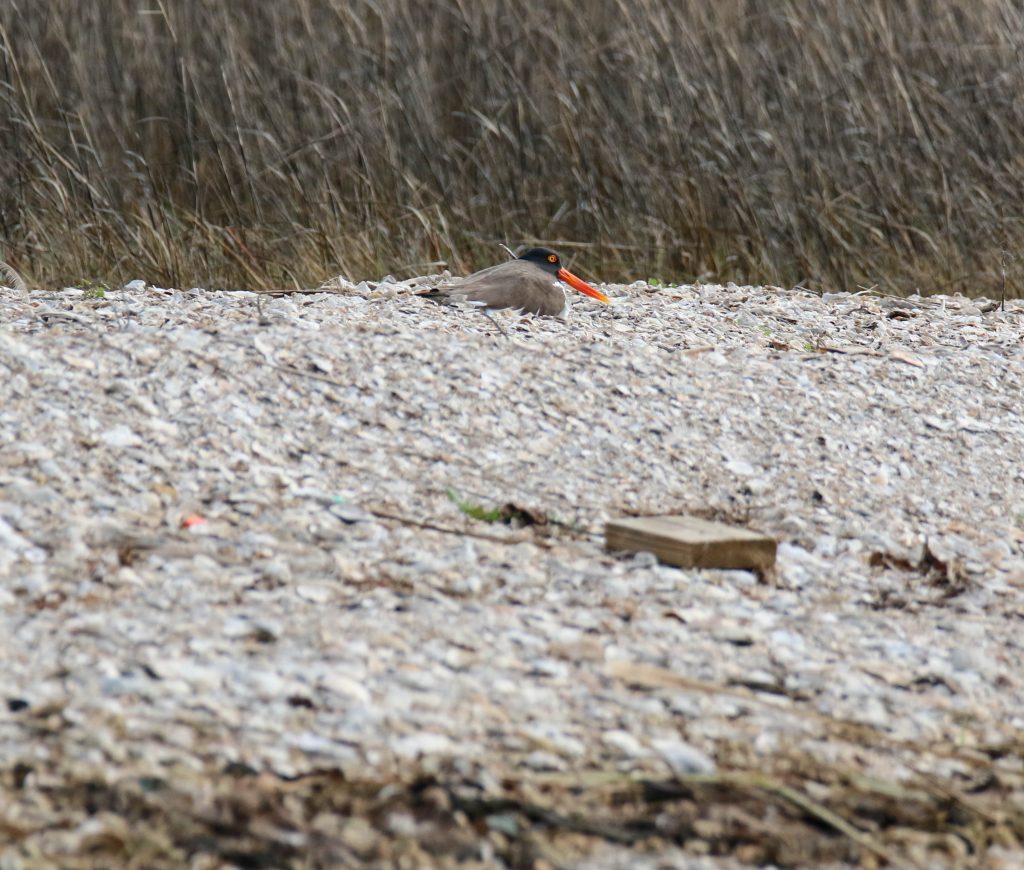 So far no pelicans are in this area so maybe they have a chance! JJ & P4 were also getting on with it and we found one of them incubating one egg. Lots of pelicans here which probably spells doom but stranger things have happened. JJ was trying to fend off one of those red throated (gular patch) pelicans from the nest. Word is the pelicans with a red throat are from the west coast. Atlantic pelicans have brown throats. 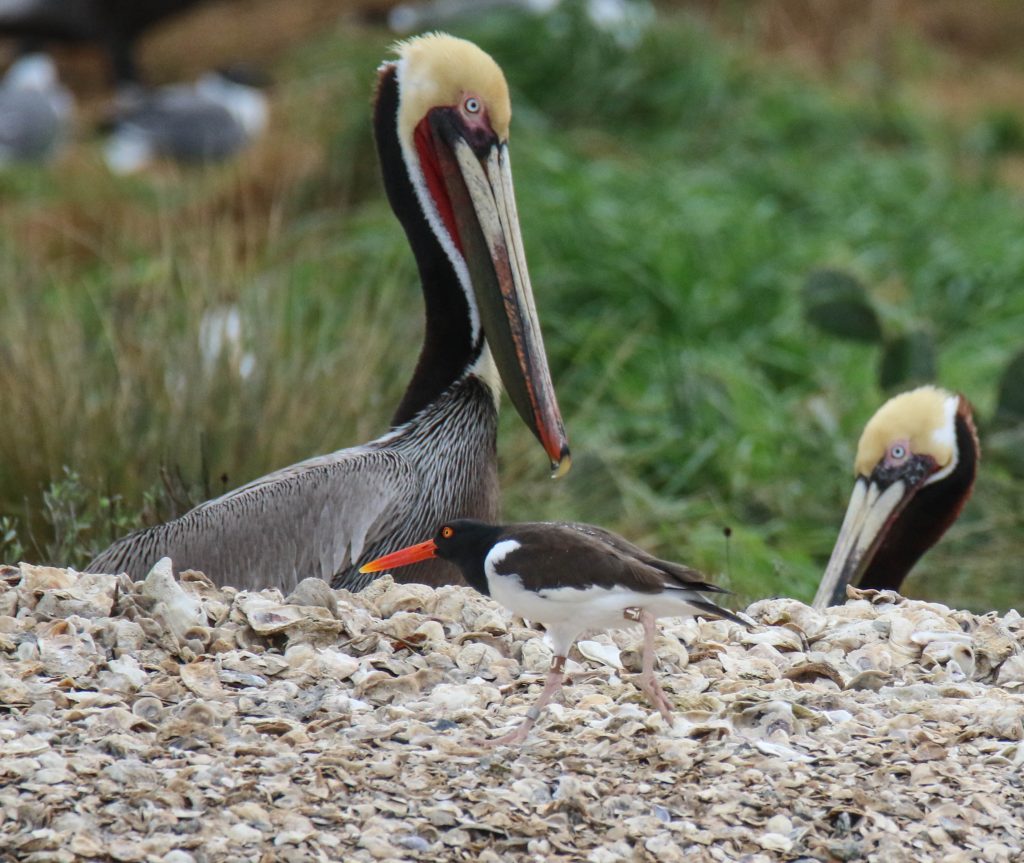 We went across the GIWW to North Deer to check on YM & JH but they were nowhere to be found. Hum. Alan spotted a bird on the North Deer breakwater a good bit away from their territory and we assumed it would be one of them but when we got closer we saw that it was J6 & UF. What?! J6 & UF had the nest on the backside of Marker 52 in the vegetation that had been overtaken by pelicans. At first I figured their nest must have failed but I looked at my notes and realized it was time for it to be hatched. If it had failed why wouldn’t they just be back on their small island feeding? Why are they on the North Deer breakwater? That makes no sense.

Wait a minute! Last year when we discovered they had fledged chicks we knew nothing about, we saw them in this exact same spot with their chicks several times. Did they get their small chicks to swim from Marker 52 over to the breakwater around North Deer again this year?! That is really the only thing that makes sense except the whole thing doesn’t really make much sense! Why didn’t they lay their nest on North Deer if they were just going to swim the chicks over there. Man this pair is a mystery! Time will tell if they have chicks. I sure hope they do! It would make another incredible story that’s for sure.

We found C1A & unbanded back in their territory finally but they hadn’t laid any eggs. E6A & unbanded flew out to greet us and landed on a reef. It was time for their nest to be hatched too so I assumed their behavior means they have a chick and they were warning us off. We left them to their business. I decided to motor over to J6 & UF’s island and to the area where they had their nest to see if the would come and harass us. They did not. Another clue that they may have something more important than harassing us on their mind.

We headed along the GIWW to Jigsaw Island where we found both pairs lollygagging on the reefs again so we moved onto to Struve Luci where all the other excitement is happening. The unbanded pair still had two eggs, HM & X7 still had three eggs and L9 & unbanded still don’t have a nest. We tried to spy on the two pairs with chicks (12 & unb and LT & JA). It took some doing but we finally managed to get a glimpse of one of 12’s chicks (photos not possible!). LT & JA are much more chill about their chicks and this week we were able to see that they have two! They were hanging out along the edge of a spartina patch and Alan got some great photos! 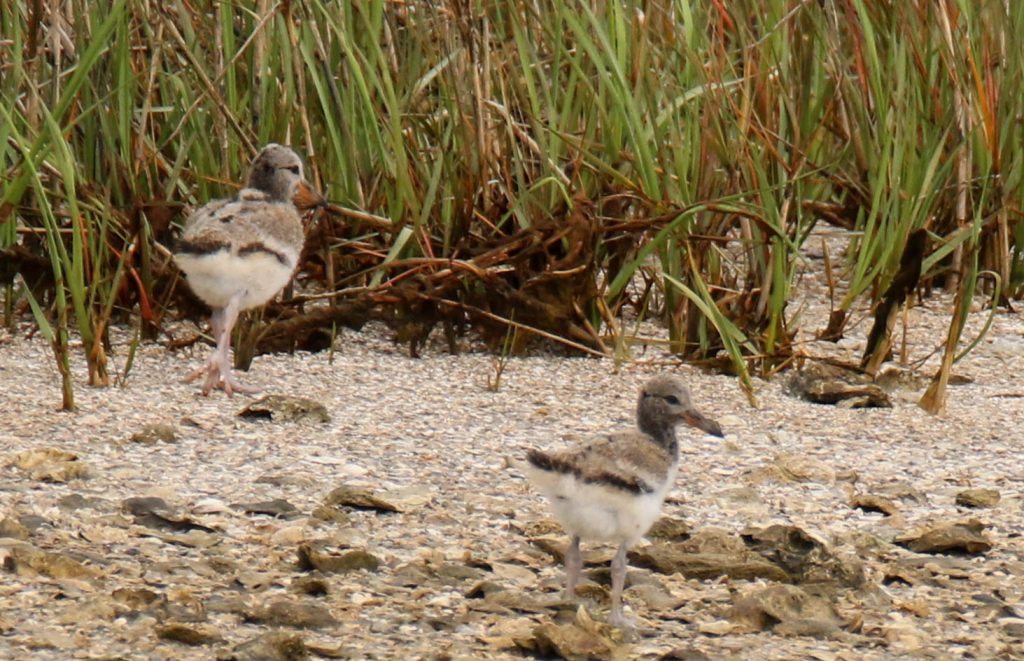 I’m so glad to know they have chicks and that there are two of them! After that happy news we proceeded along the shoreline of Galveston. JX & YK were hanging out on the shoreline so no nest for them yet. 16 & unbanded were on the dock in much the same position as last week. 16 refused to stand up for positive id and the tide was too low to get close enough to motivate him so we’ll just have to assume it was him.

On South Deer we were surprised to find that F1A & E2A were no longer incubating their nest. They went nuts when we approached though so I can only assume they have chicks (the eggs were gone). We must have missed this nest for a few weeks because I wasn’t expecting it to be hatched yet. A5A & unbanded were still incubating away though so we went to check Confederate Reef. We found the same gang of young birds as we have in weeks past and there were several more on the docks.

At Gangs Bayou A1A & unbanded were on the breakwater again but only one of A4A & unbanded was on the oyster balls surrounding the island. You should know by now that only seeing one of a pair can only mean one thing this time of year. The other one is on a nest somewhere! We searched what we could see from the boat but we didn’t see it and the tide was too low to get up to the island to check. At some point the other one came flying out from around a corner of the island. We’ll just have to check next week.

So now it was time for some exploration. Alan had been out with a TAMUG researcher looking for a turtle with a transmitter and had found a pair of unbanded oystercatchers further down the island that had scrapes. He thought they might have a nest so we decided to go check it out. We motored way down to McAllistar Cove but the danged birds weren’t here! Blah! I wasn’t too keen on trying to go back up along the island against the wind so I suggested we go across the bay with the wind at our backs and check on the pair at the West Bay Mooring Facility that is far west of where we usually survey. I had planned to check on this pair when I check Bastrop and Drum Bays as it’s much closer to that area but what the heck. So off we went cruising across the bay.

When we got there, we found they were right we expected them to be! This pair is unbanded too and I’ve been itching to get some bands on them so we set up the noose carpets. This was quite an undertaking as barges were going by regularly and we can’t leave the boat anchored along the shoreline with barges going by because the wakes could wash the boat up quite high on the island and then we’d be stranded. So Alan and I had to move the boat away from the shoreline several times while Taylor and Sarah worked on the carpets. 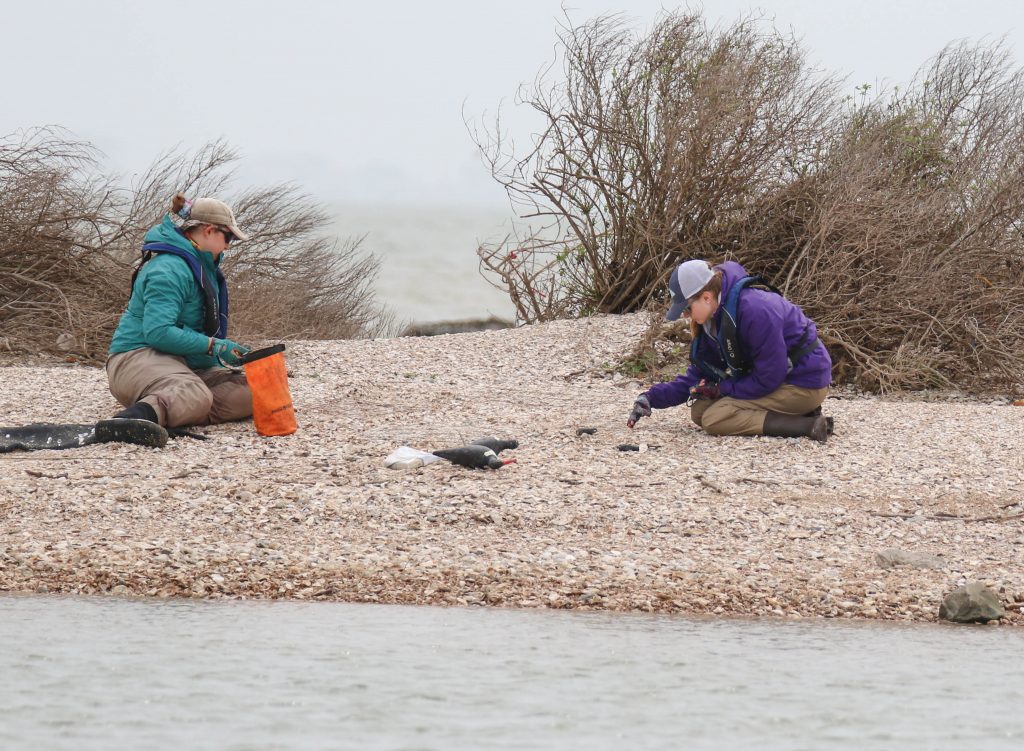 Finally we got them done though. I started the call playing and we motored away. It took a bit but the birds finally got interested and started their dance. They were walking quite close to the carpets so I didn’t think it was going to take very long. Sure enough it didn’t and we got them both! But a barge was coming! Dang it. I ran the boat over and Taylor and Sarah hopped off and grabbed the birds while Alan and I moved off the shore again. Once the barge was gone, we zipped back over, picked everything up and took the birds on the boat so we could motor off and anchor out of harms way to band them. They were quite handsome and the female’s bill was really long (females are bigger than males)! We banded them F2A & E3A so now they are named forever! Woohoo! 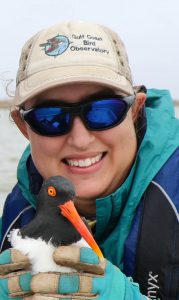 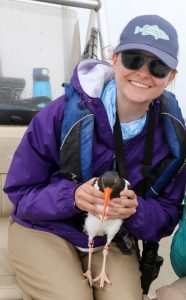 With that done, we headed along the GIWW back to the boat ramp. We had to pass by FR & unbanded’s area to get back so we tried to spy on them again. No luck! Maybe next time.