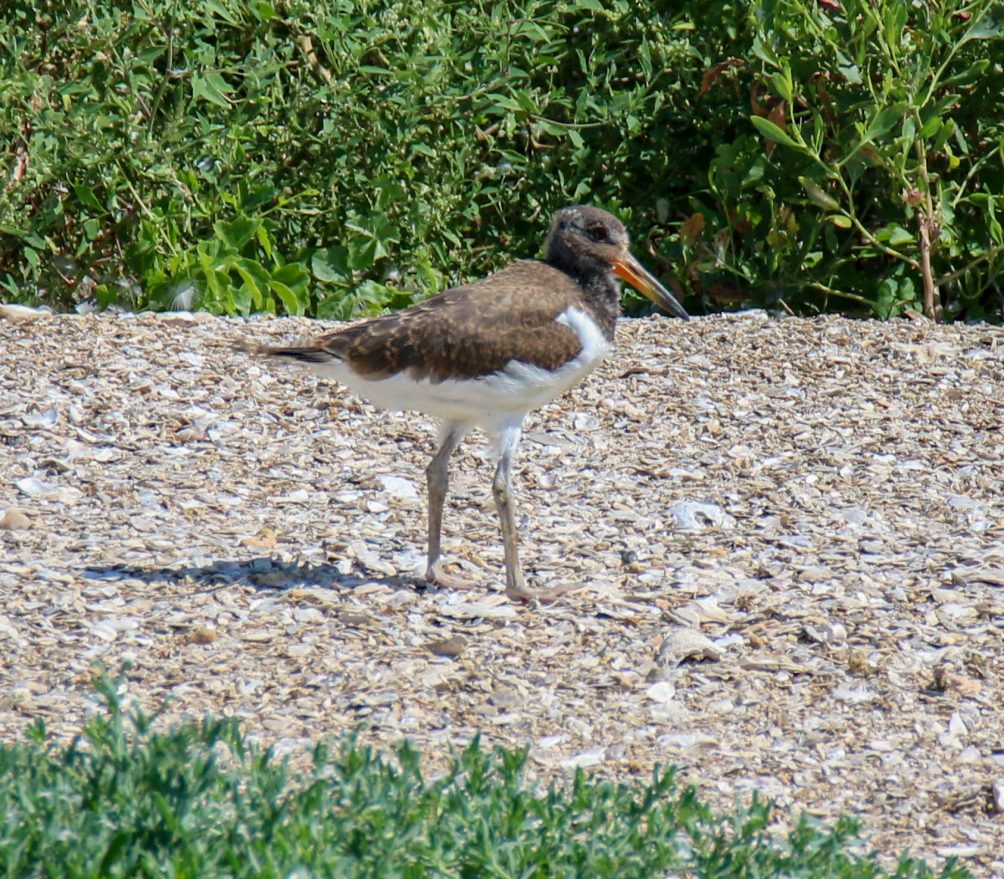 Well it was quite a day on Thursday. I headed out towards Galveston as usual and got about 6 miles from Hitchcock on FM 2004 and traffic came to an all stop. I could see flashing lights ahead but very few cars were turning around so I figured it was going to get cleared soon. After 30 minutes though a sheriff came down the line of cars and told everyone to turn around. Um. I’m towing a boat and this is a two-lane road with no shoulders. Challenge time!

I tried twice to turn around by pulling way off into the grass on the right and turning left across the road but each time I couldn’t make the turn sharp enough and I couldn’t figure out which way to turn the wheel to back the boat up so I could make the turn. Fortunately there was a guy in a truck behind me that was way too big to turn around. He was stuck there so I guess he figured he’d pass the time by helping me. He got out and directed me how to turn around so I could go back. Yay. Thank you nice trucker!

I had to take a detour almost to Alvin and then cut over TX 6 before I could head back south towards Tiki Island, so I was an hour late getting to the boat ramp but at least I got there! I had alerted Alan and he had alerted the Hehir twins (Elizabeth and Elisha) who were going out with us so all was well. We finally got on the water about 10:00 and went straight to Jones Bay. The oystercatchers are being very skittish for some reason so we didn’t get much a glimpse of FR & unbanded. CA & Y2 were present with one of their chicks but what I really wanted to see was the Caspian Tern chick to see how it was doing.

It was having nothing to do with us though and jumped into the water and started to swim away when we got near. What the heck? The oystercatcher chicks usually only do this after we have handled them and we’ve never been on the island with the tern chick so I’m not sure why it was so spooky. We went around and got between it and where it was headed so it would swim back to the island which it eventually did. We left quickly so it wouldn’t swim again. Therefore, no photos!

We headed over to the GIWW and went along Marker 52. Alan and I both expected that W5 & JC’s chick would not still be alive because they don’t seem to protect their chicks very well but surprise, surprise, it was! The chick was down on the shoreline and the adults were up on the shell berm exhibiting their lack of parental care. 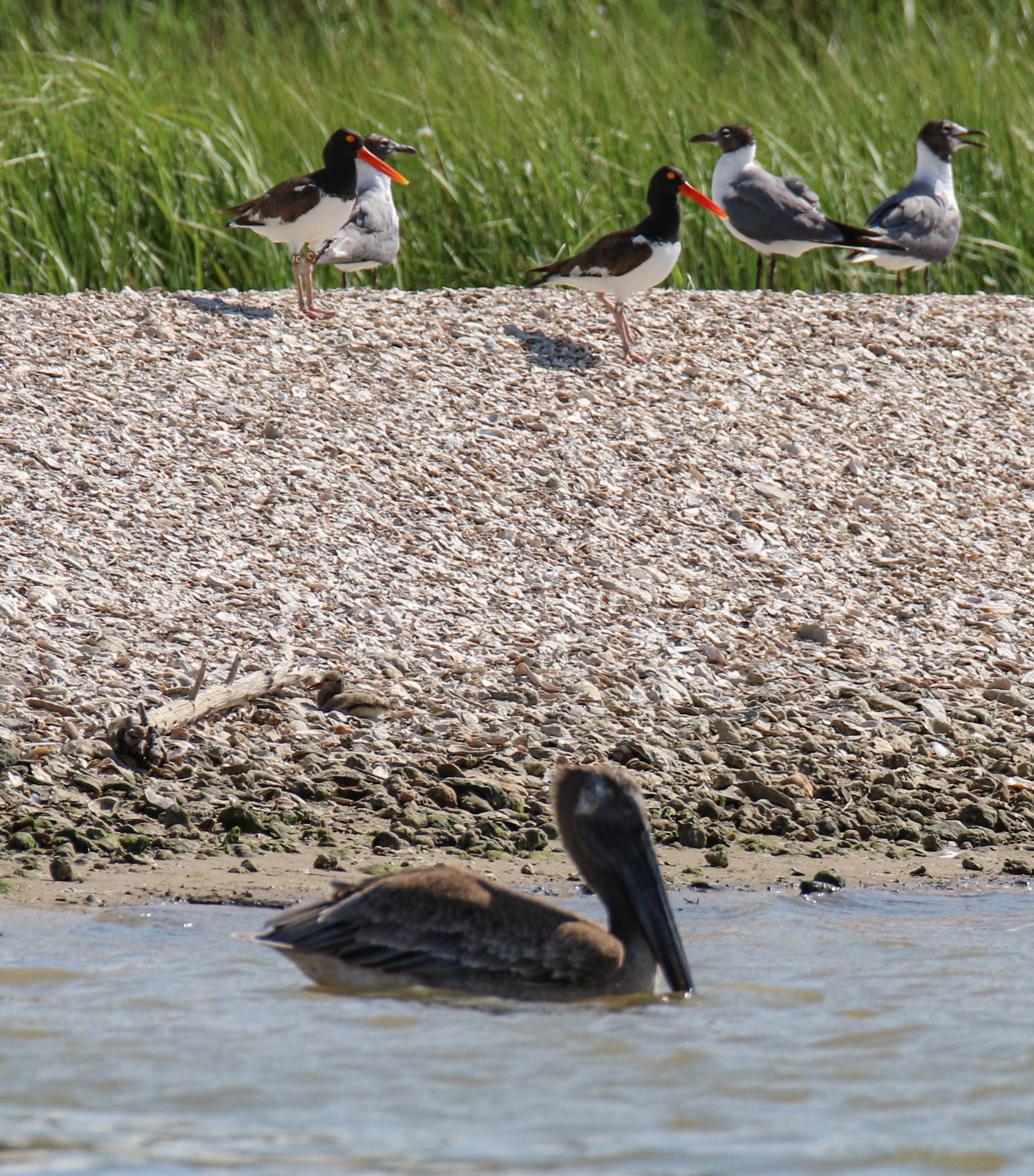 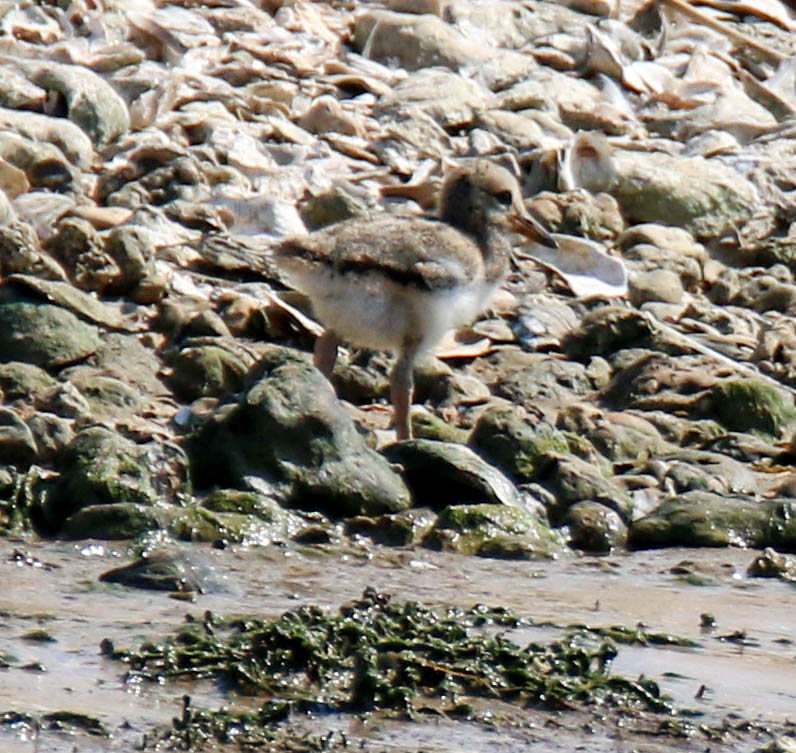 We didn’t get close and when a gull meandered over, one of the adults moved down closer to the chick so I guess they are watching over it. When you’re an oystercatcher parent, you have to be on guard 24/7!

There wasn’t anything else exciting happening there except we found a pelican with a broken wing. I didn’t want to carry it around on the boat with us so we decided to come back and get it later. We headed over to band C1A & unbanded’s chick! 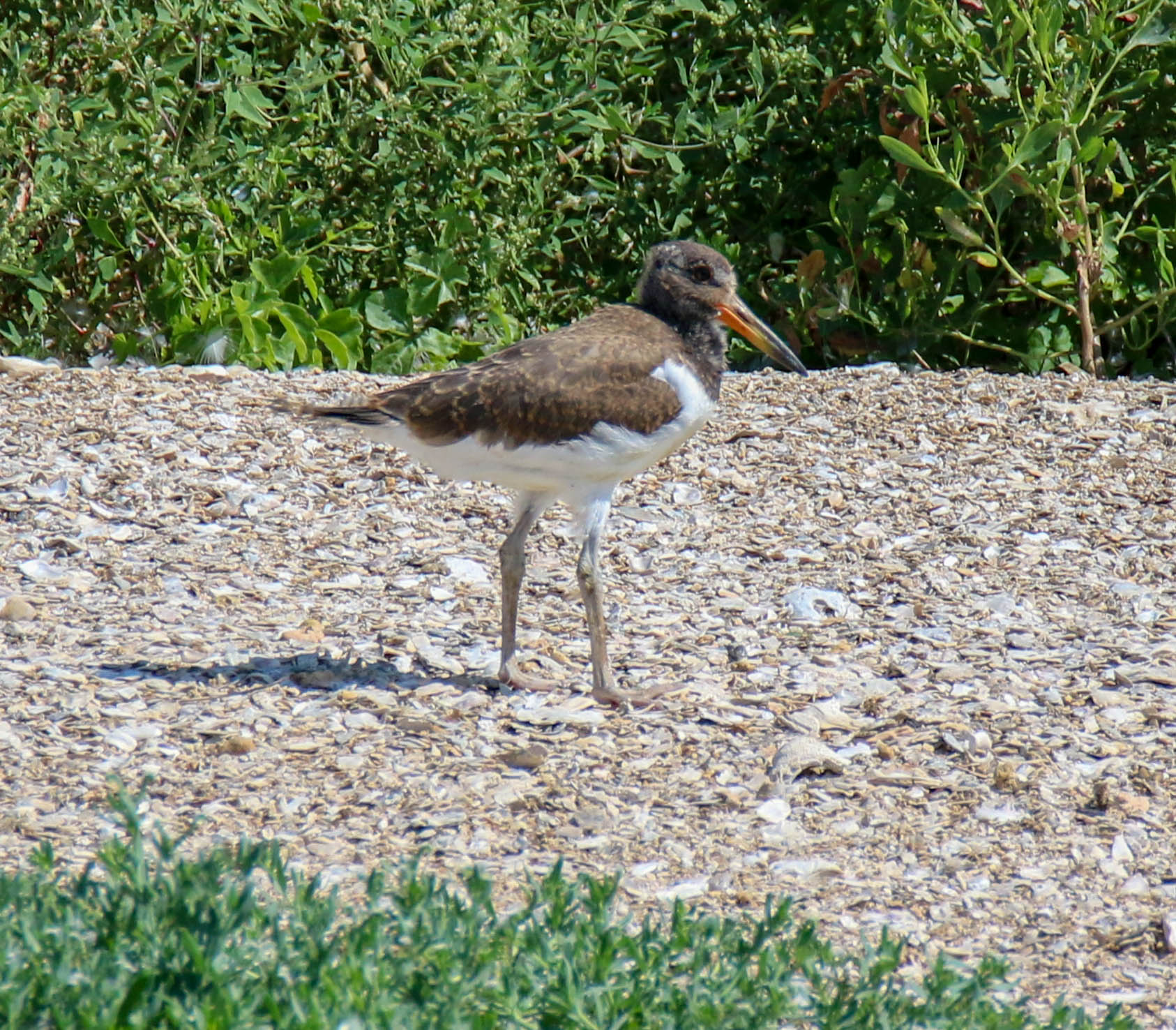 It high-tailed it for the vegetation when I made chase. The vegetation was quite thick and I wish I’d thought to take a photo because it was beak down in a thick patch with only its butt sticking up like a dabbling duck feeding in the water. It looked quite hilarious. I picked it up gingerly and took it back to the boat. It is now Y8Y. Eight is my favorite number so that little guy should do fine! It was pretty hefty and will probably be fledged by next week. 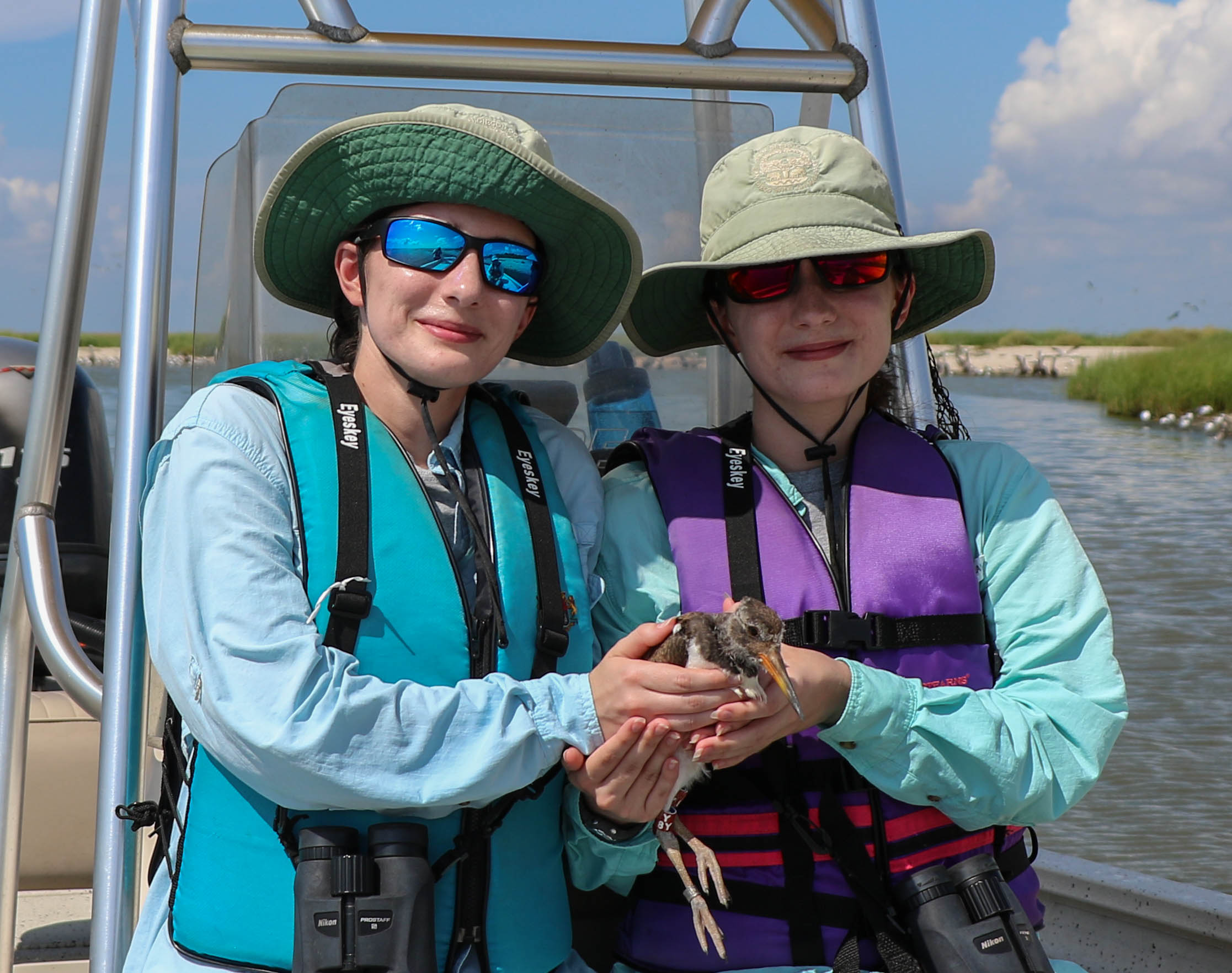 From there we headed to South Deer. F1A & E2A were present but very spooky and we didn’t see any other oystercatchers on the island. I had hoped that A1A & unbanded would magically reappear with a chick but of course it didn’t happen.

Confederate Reef was exposed for a change and we found 14 oystercatchers there! The gang was all feasting away. Nobody on the docks as a result. There was a newly fledged Caspian Tern on the reef and Alan got a photo. This is pretty much what the other one looked like so it will probably be fledged next week. 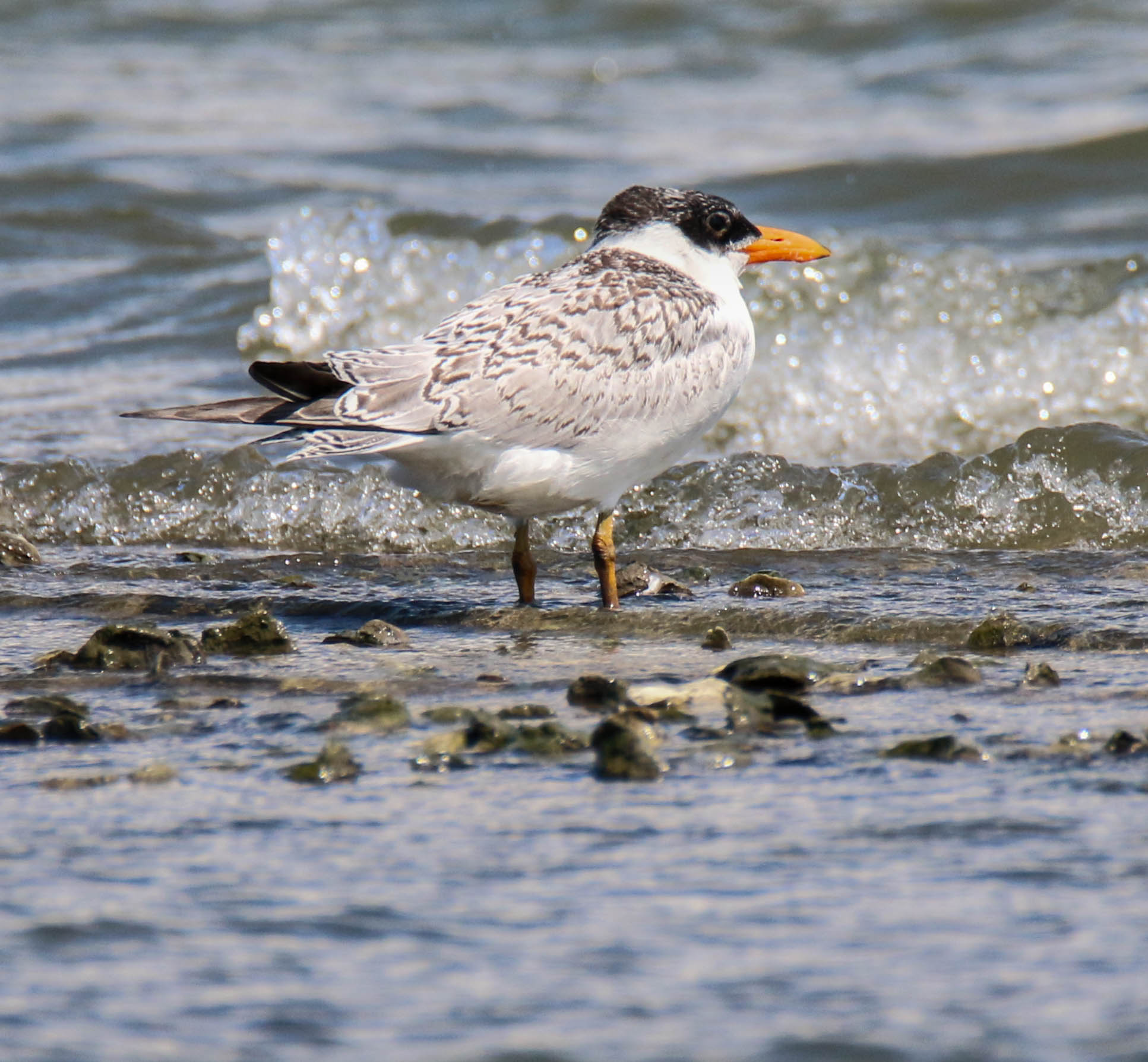 A1A & unbanded were on the Gangs Bayou breakwater so I guess I have to admit that that their chick really didn’t make it. We headed up to 8 Mile Road and found six more oystercatchers. 16 was there with his skirts blowing in the wind. 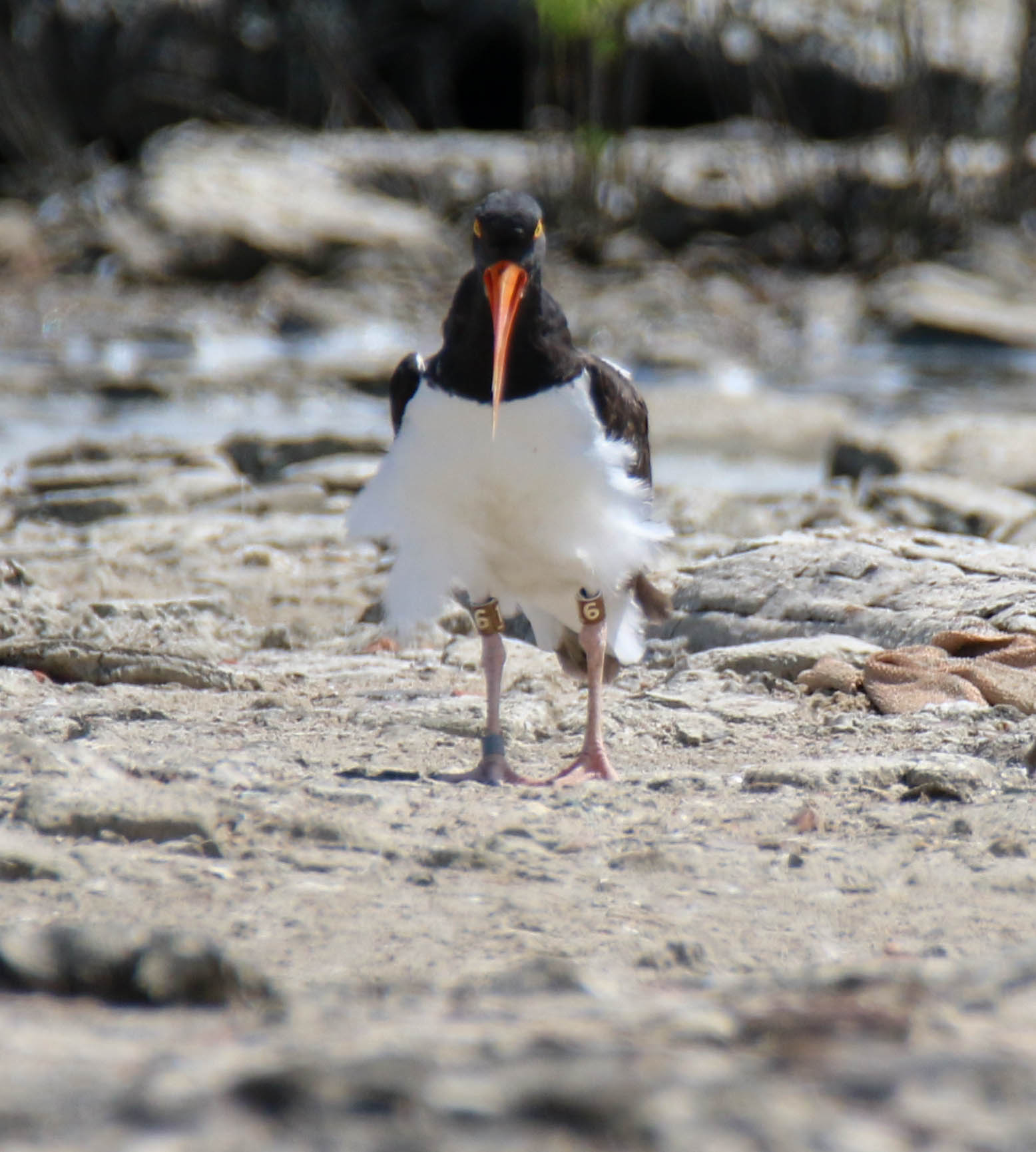 This is why birds usually stand facing into the wind and not the other way! C8A was also there which is the bird we rescued as a youngster down in Matagorda with fishing line around its feet in 2019. It appears it is making a home in West Galveston as this is the second time we’ve seen it in the area.

Alan also got a photo of YT who we haven’t seen in quite a while. YT was hatched on South Deer in 2015 and is the only bird that I know of that was adopted by an adult pair as a chick. Usually an adult pair will kill a chick that is not their own but YT got lucky. One of its parents was killed by a hail storm the week after we banded it and it must have wandered down to the neighboring pair’s territory. They had a chick of their own and when we returned the following week, YT was hanging with them and their chick. It wasn’t fledged yet so they must have been feeding it. Glad to know it is still doing well and hanging with the gang. 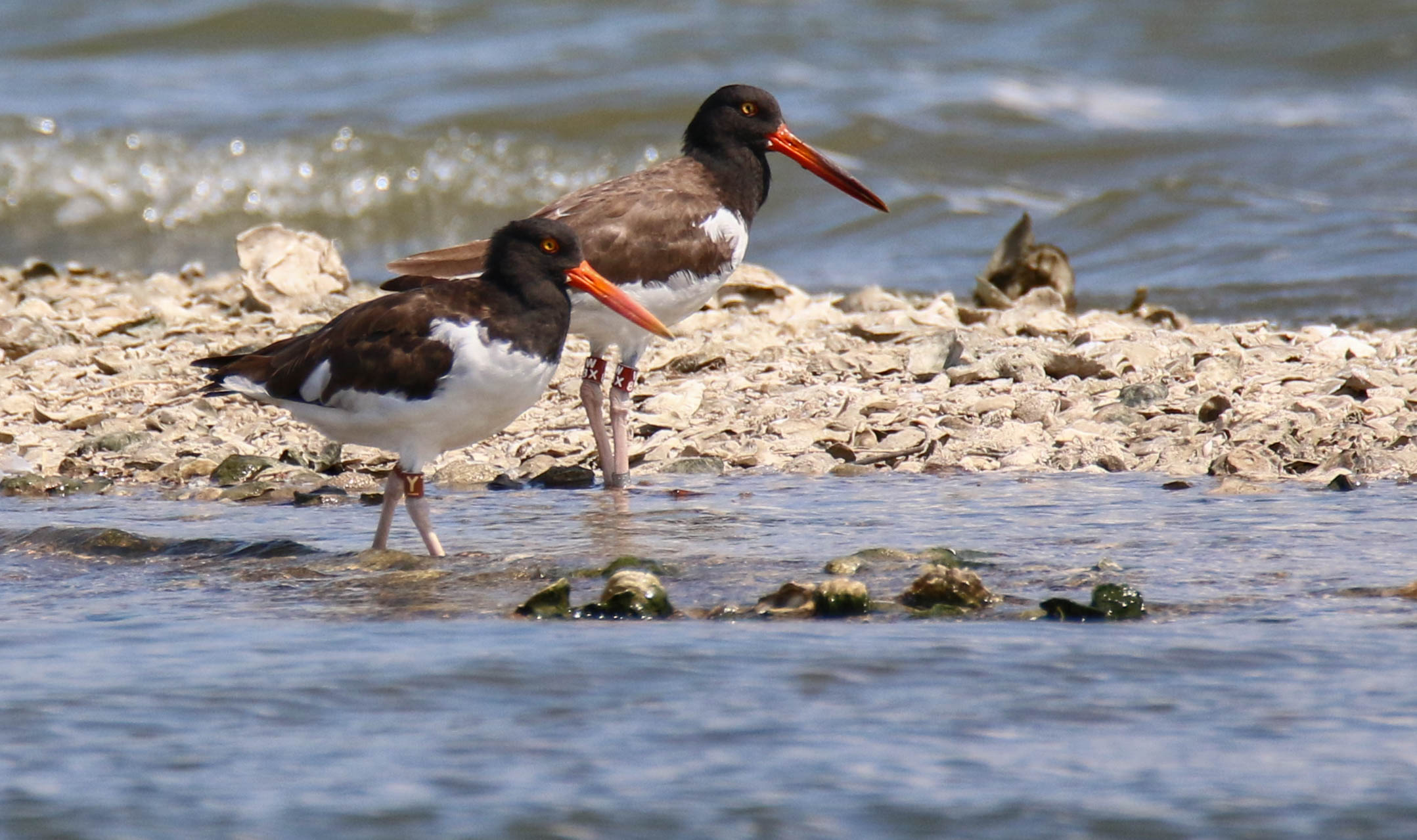 We proceeded to make the rounds and found nothing else interesting until we got to Struve Luci where we banded all the skimmer chicks last week. All the adult oystercatchers were there but the only chick present was the one with fishing line around its foot. Most of the skimmer chicks were fledged. 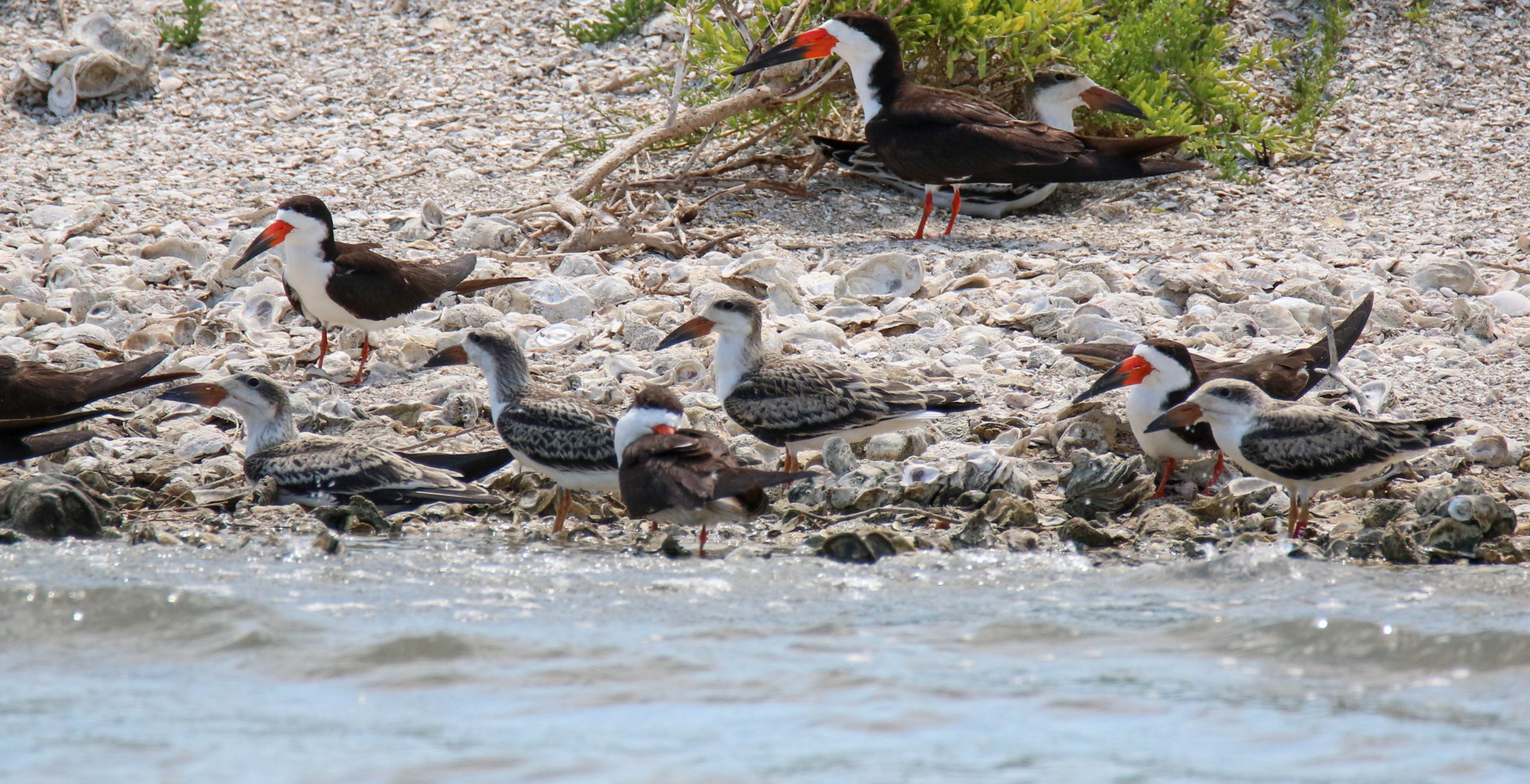 I went on the island to see how many weren’t fledged and all but six flew! Yahoo! The best news was that I found no dead ones on the island. That is quite unusual and means they are having a very successful year. For reasons we don’t understand, a lot of skimmer chicks die before fledging. It is a normal occurrence to find 10-15 dead chicks in a colony this size. I was quite elated to find none. Of the six chicks that weren’t fledged, two were already banded and two were too small to band. We banded the other two and the twins let them go. 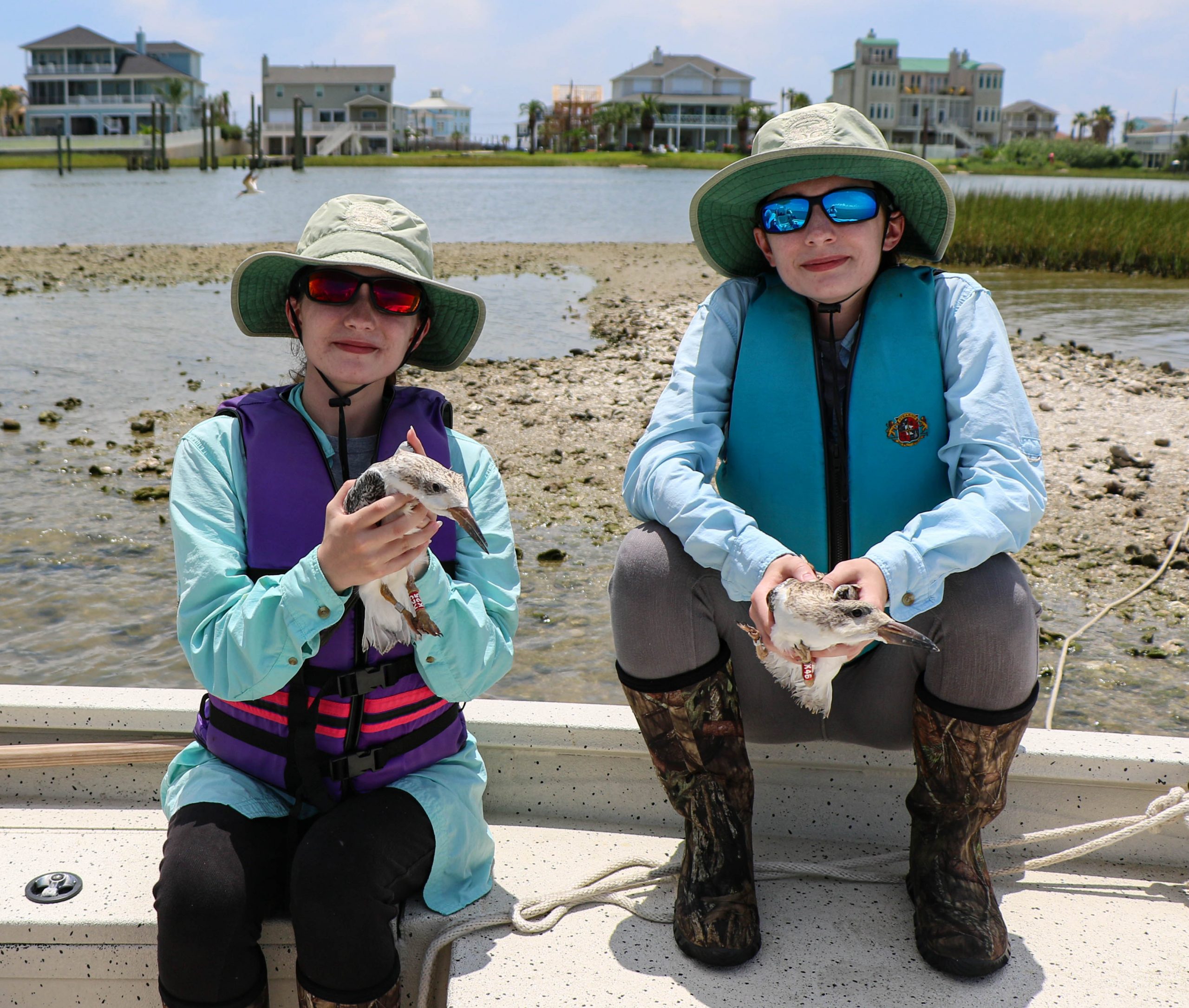 Since I was on the island anyway, I made a quick count of nests. 39. So there will be more baby skimmers soon! Yay!

That was the end of our work, so we went back to find the pelican. That turned out to be quite a chore because it had swum a long way from where we saw it. We found it though. I made the first chase but it jumped off the reef and started swimming away. When I tried to follow I sank in mud up to my knees. Yikes! Alan jumped off the boat to rescue me, but I managed to get free just before he reached me. That could have been much worse! I got a few small cuts on my legs so I washed them immediately with hibiclens and we made another approach. This time one of the twins jumped off the boat with the dip net and managed to snag it before it got too far out in the deep water. Phew. Another successful rescue.

We wrapped it in a towel and took it to Alan’s house where he put it in a box for transport to The Wildlife Center of Houston later in the day. 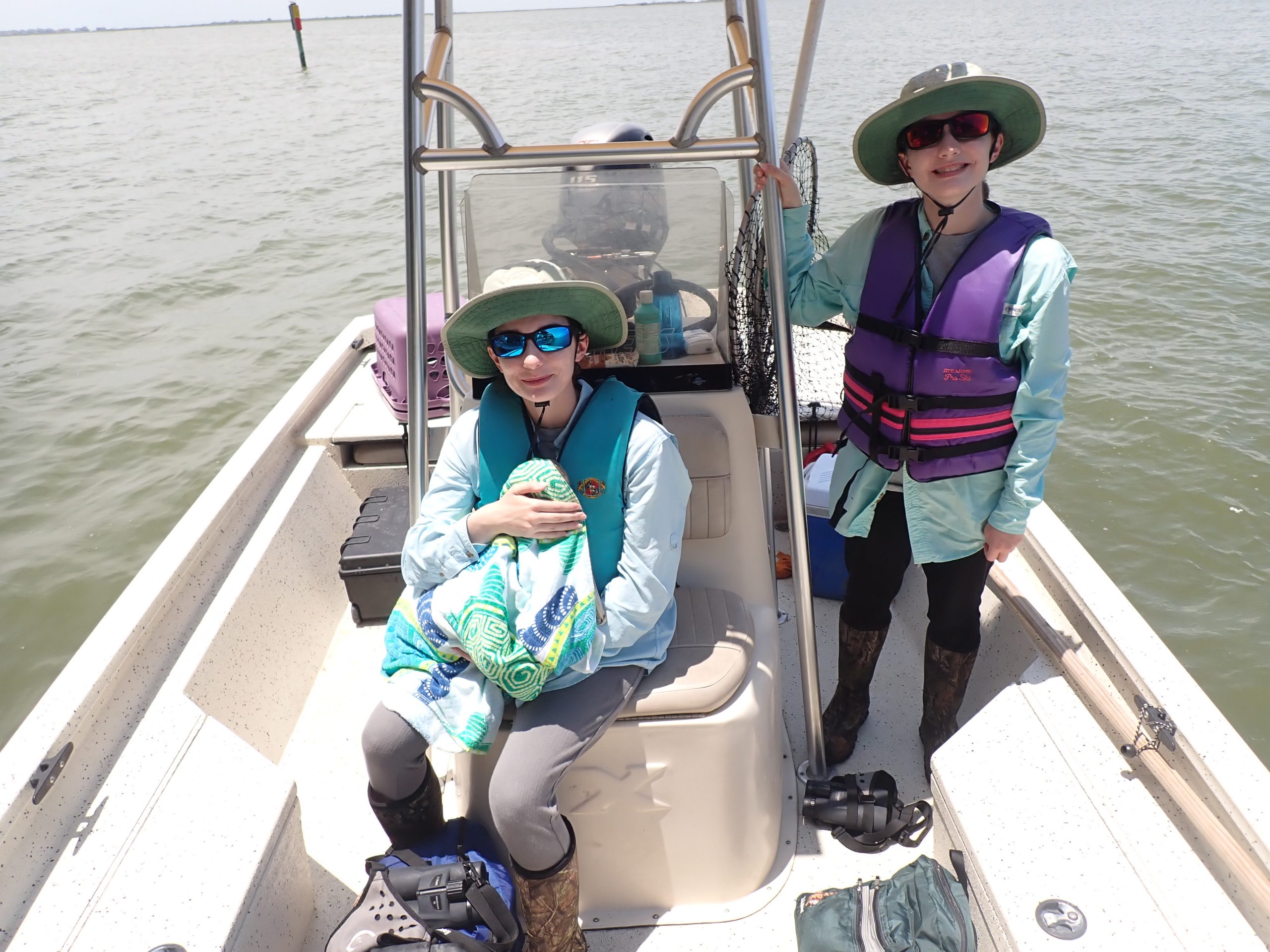 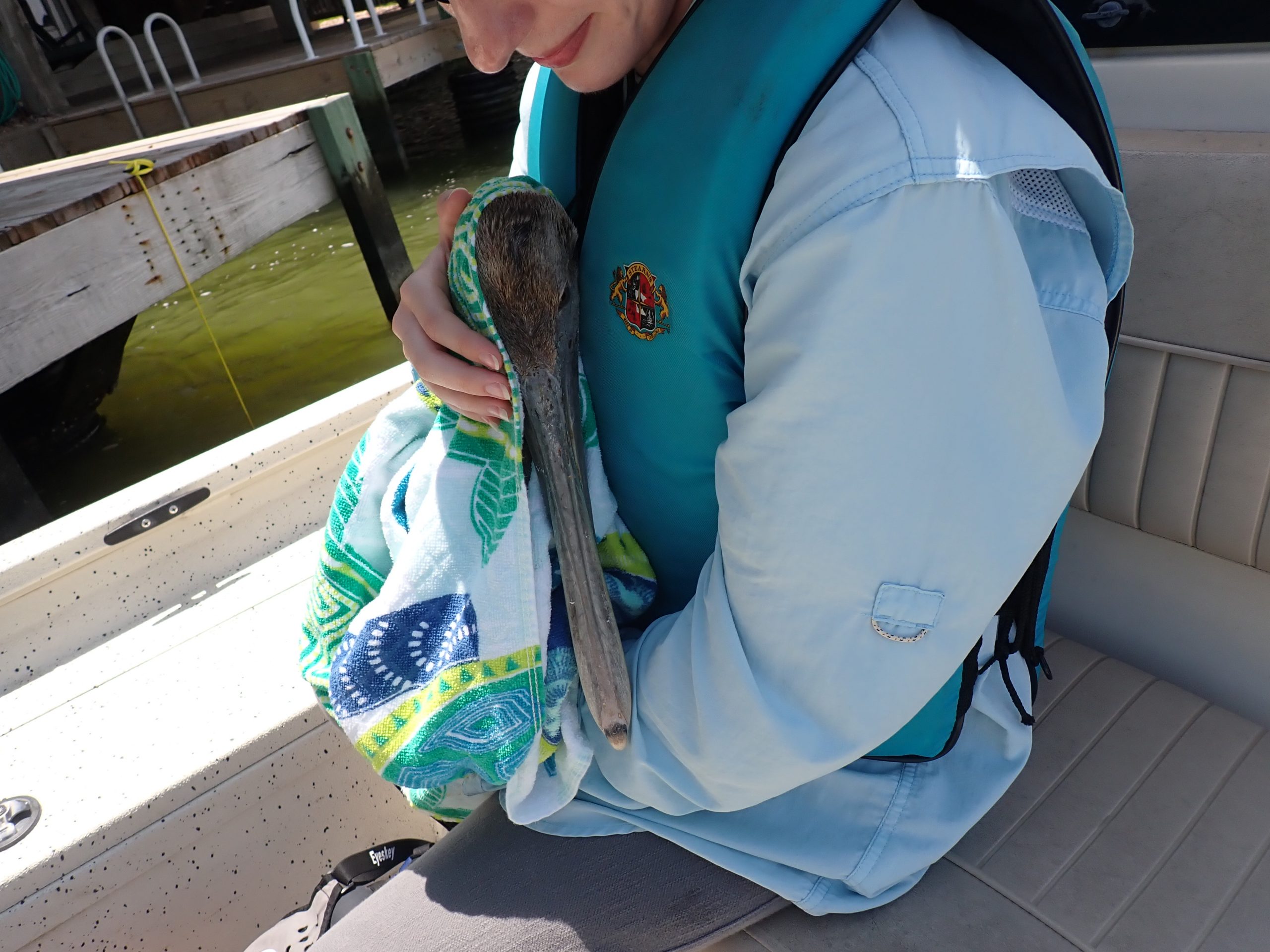 We headed back to the boat ramp a bit stinky but satisfied that we’d had a good day!