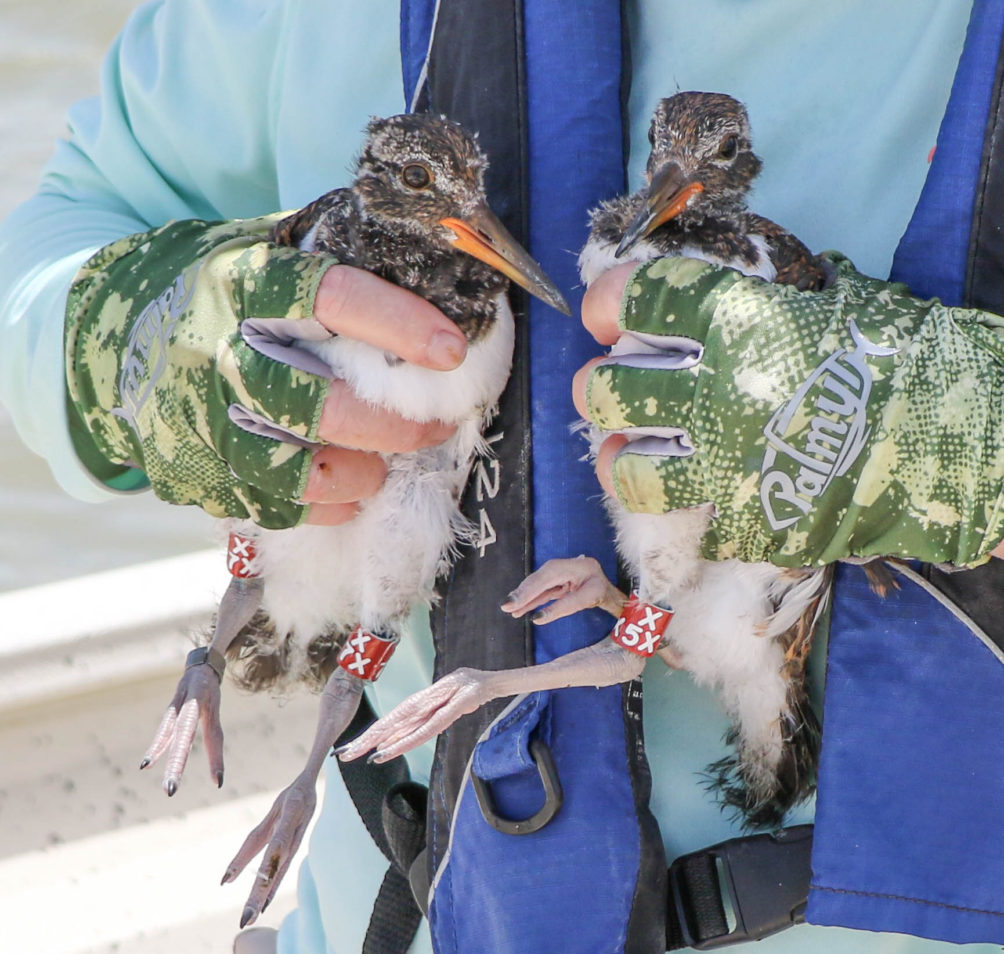 This week I had to split the survey into two days because of the weather and the fact that I didn’t have an entire day free due to my participation in a pelagic birding trip from Freeport on Thursday and Friday. On Tuesday, Alan, John Wright, and I checked out the birds in West Galveston Bay. It was quite windy so we had to go the opposite way around than we usually do so we’d be protected from the wind and be traveling with it instead of against it.

We started in Jones Bay but nobody was home to visit with us so we proceeded to check Marker 52. In W5 & JC’s territory we found a single unbanded bird, but no W5 or JC. I’m sure if they’d been around, they would have run that unbanded bird off. Then we saw either the same or another unbanded farther down the island. We didn’t see any of our regular birds until we got to where JJ & P4 have their new nest. They were both there and one was incubating.

There was no sense in checking J6 & UF’s island because the tide was so high it was under water so we headed to North Deer. YM & JH were home with both their chicks who are looking quite dapper. 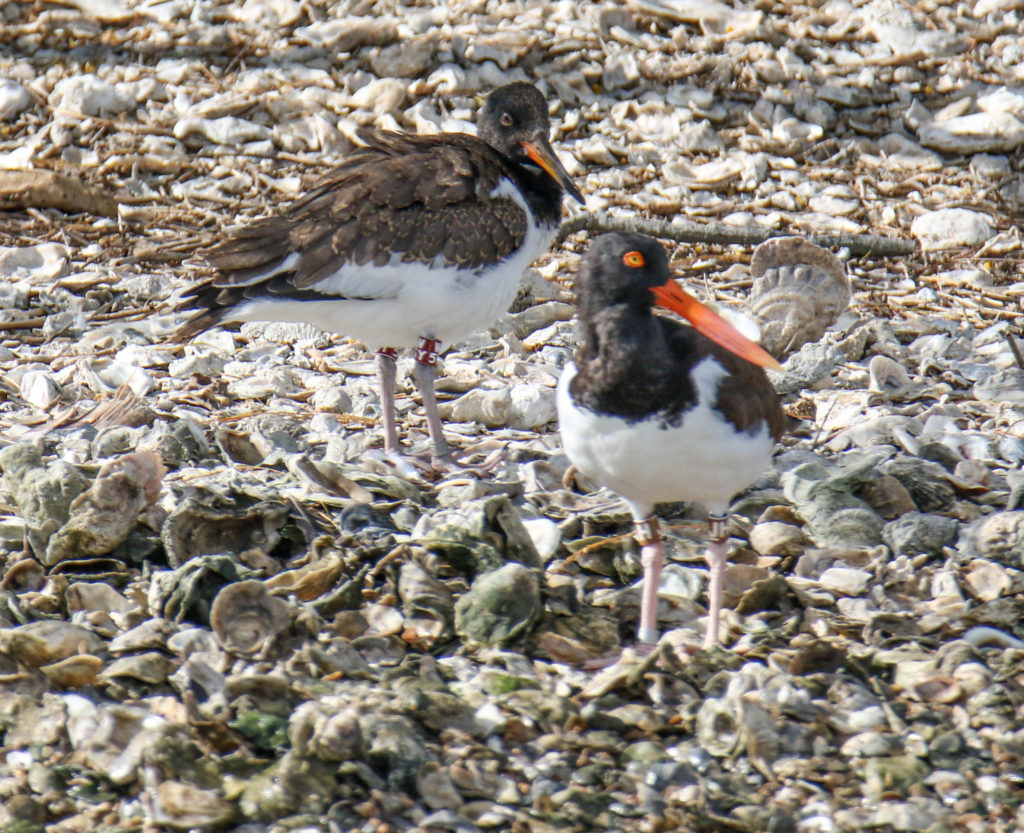 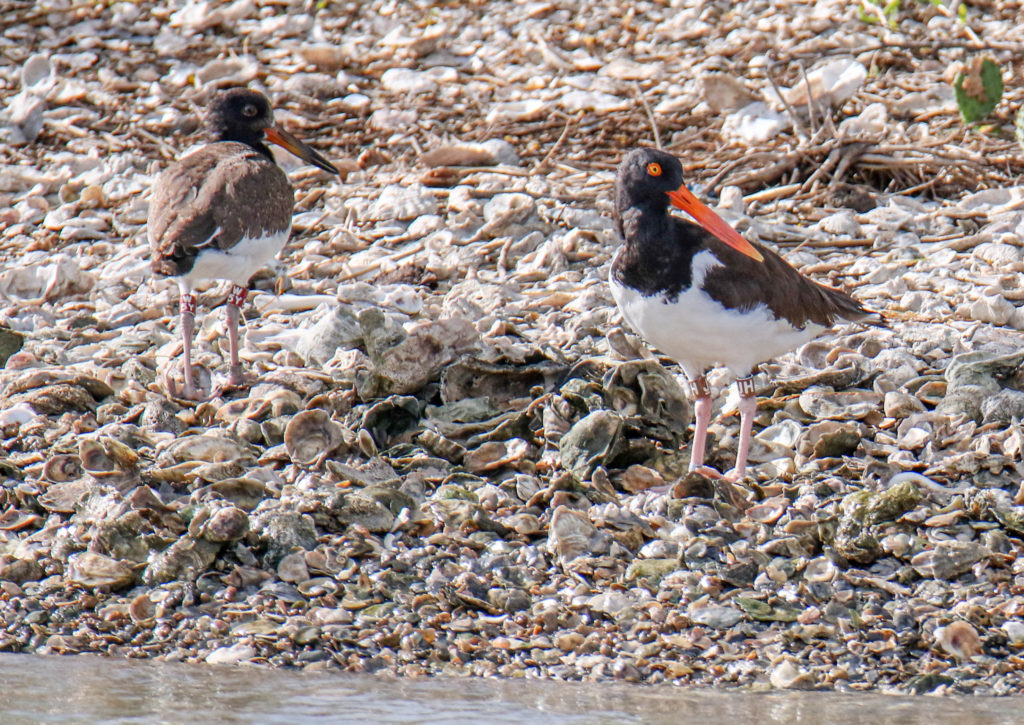 We found J6 & UF on the breakwater than runs along the shore of North Deer. They were separated by a good distance and UF appeared to be hiding behind a large tree trunk washed up on the rocks. Suspicious. We couldn’t see a nest from the boat and it was too dangerous to climb on the breakwater. We’ll check again next week.

C1A & unbanded’s chick still cannot fly even though it is 48 days old. Fledging age is 35 days so I’m not sure what’s happening there. Hopefully nothing is wrong and it will be able to fly soon. 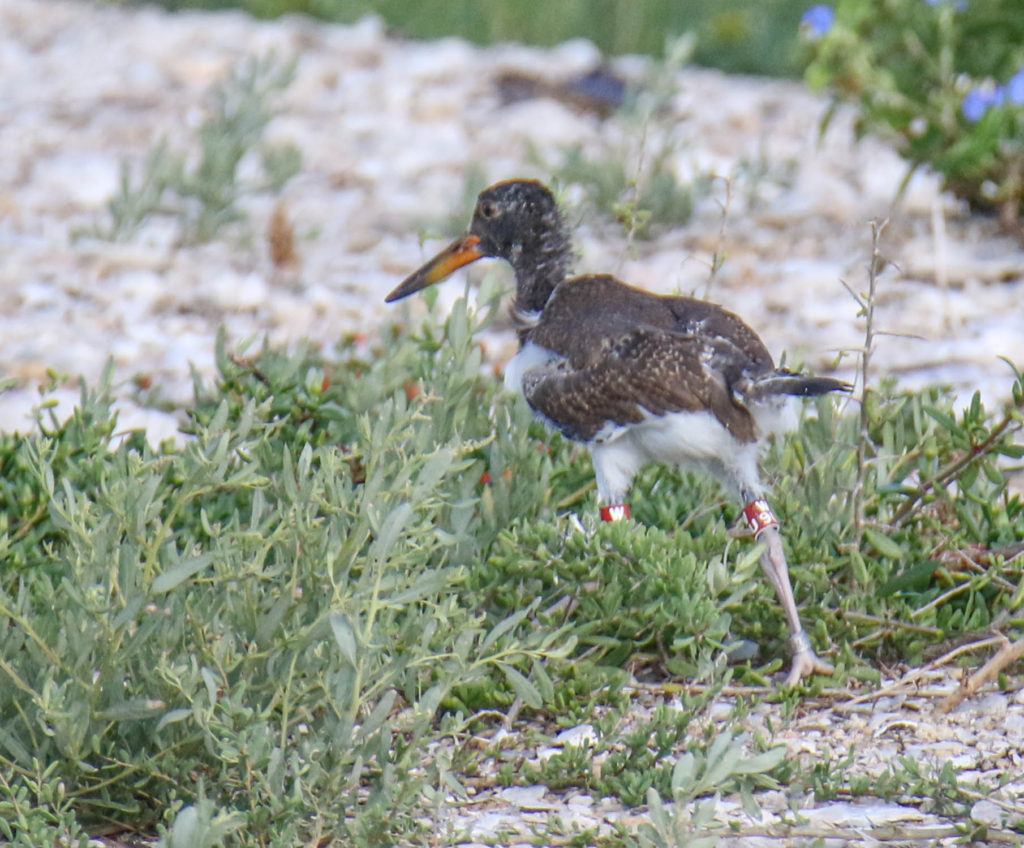 E8A & unbanded were still incubating their nest next door to C1A & unbanded so we moved on South Deer.

F1A & E2A appeared to be hiding behind some vegetation on the island and their chick wasn’t with them. They were acting like they had a new nest which would be super odd since they fledged a chick already. I went up to check but found no nest. Y7 & unbanded weren’t home but A5A & unbanded were still incubating their nest amid the gulls. 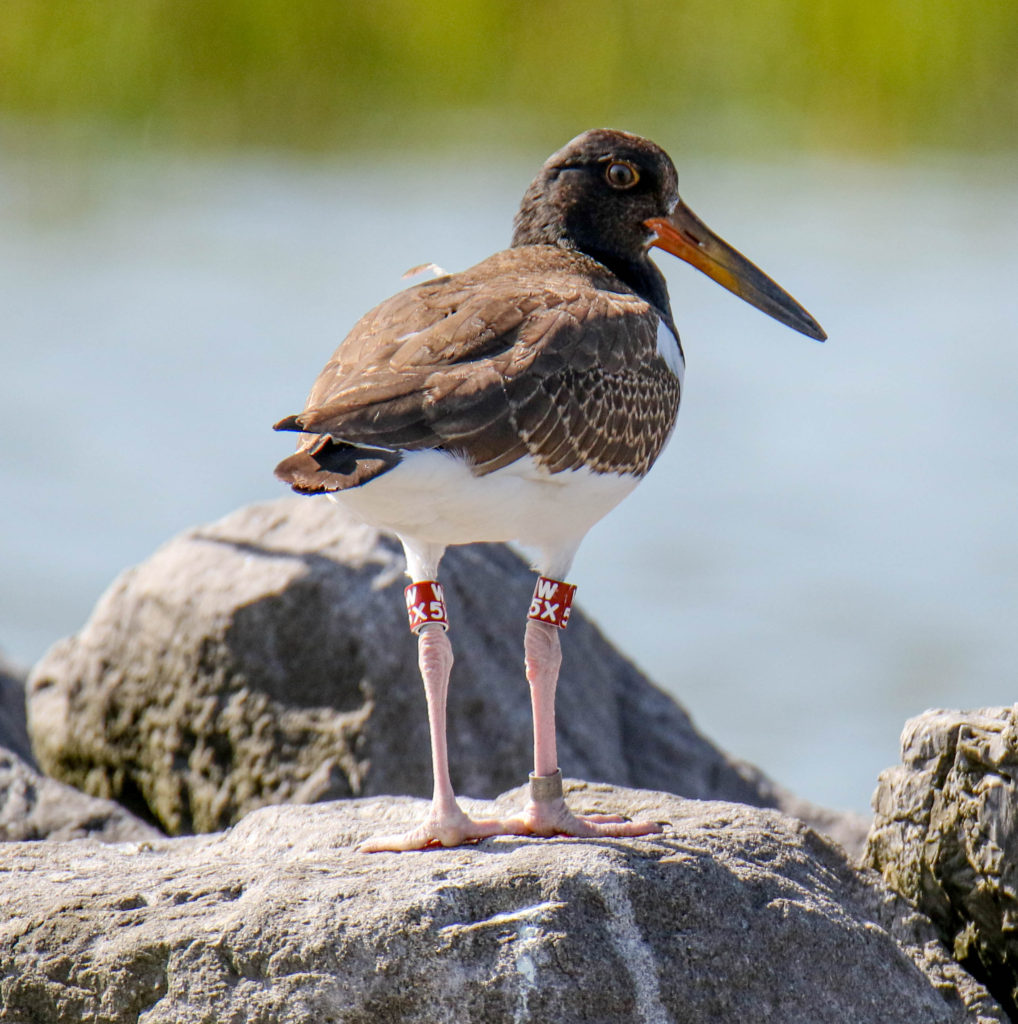 A4A & unbanded and their chick were on one of the small mounds that were created when the breakwater was built so clearly their chick can fly well now. Yay! 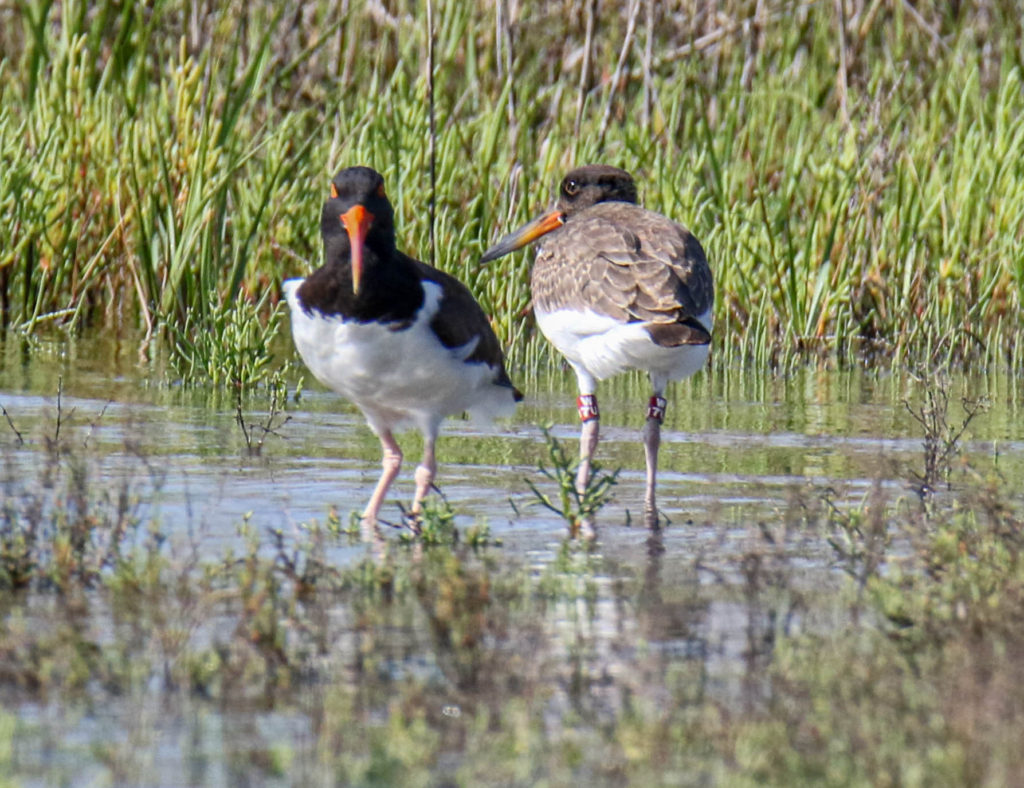 Because the tide was so high the reefs were all underwater. We thought the birds would be on the docks but instead we found 16 of them on the 8 Mile Road extension including 16 & F1A who were not happy with all the visitors.

I guess they consider that area theirs and they don’t like sharing it! They were pretty outnumbered though so I don’t think they’re going to get anywhere with chasing the other birds away.

YK & unbanded weren’t home so we headed to Jigsaw. All three nests there were being incubated so I guess all is well. The tern chicks are getting big and they haven’t lost their bad attitude! 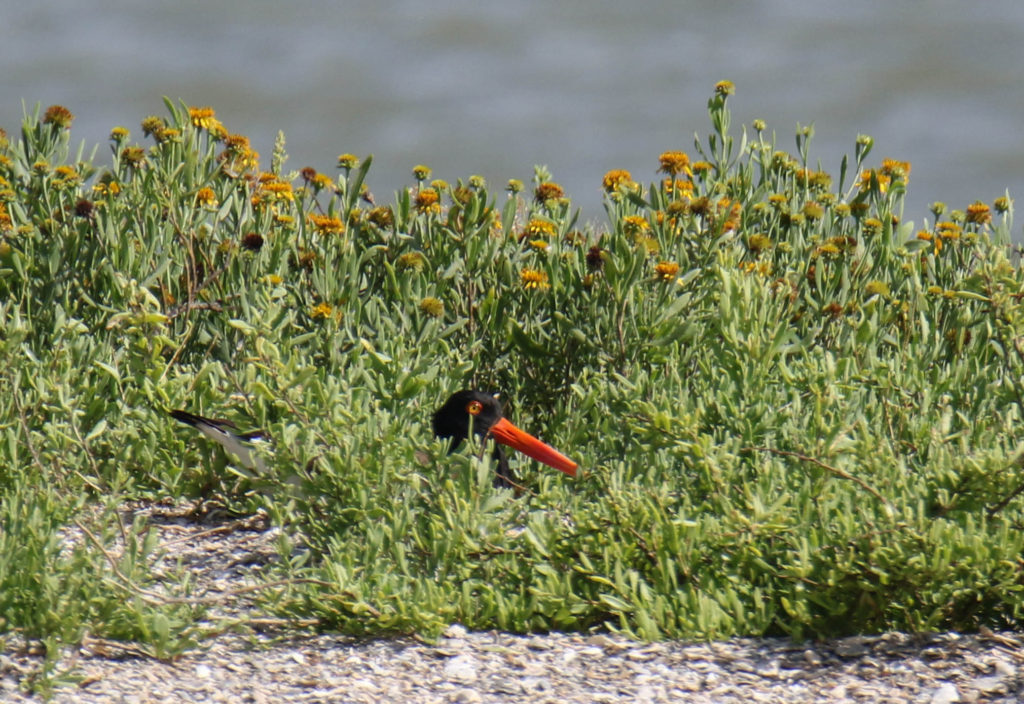 On Struve, we saw most of the adults but all the chicks were absent. 12 & unbanded and LT & JA’s chicks are plenty old enough to be on their own but E5A & unbanded’s chicks seem too young for that. Hopefully nothing happened to them. It was too rough to go to Swan Lake so we headed back to the boat ramp.

On Wednesday, Alan and I assisted David Newstead from the Coastal Bend Bays and Estuaries Program deploy four transmitters on adult skimmers on Struve Luci. I’ve banded a lot of young skimmers but never an adult so that was interesting. Their wings are so long! 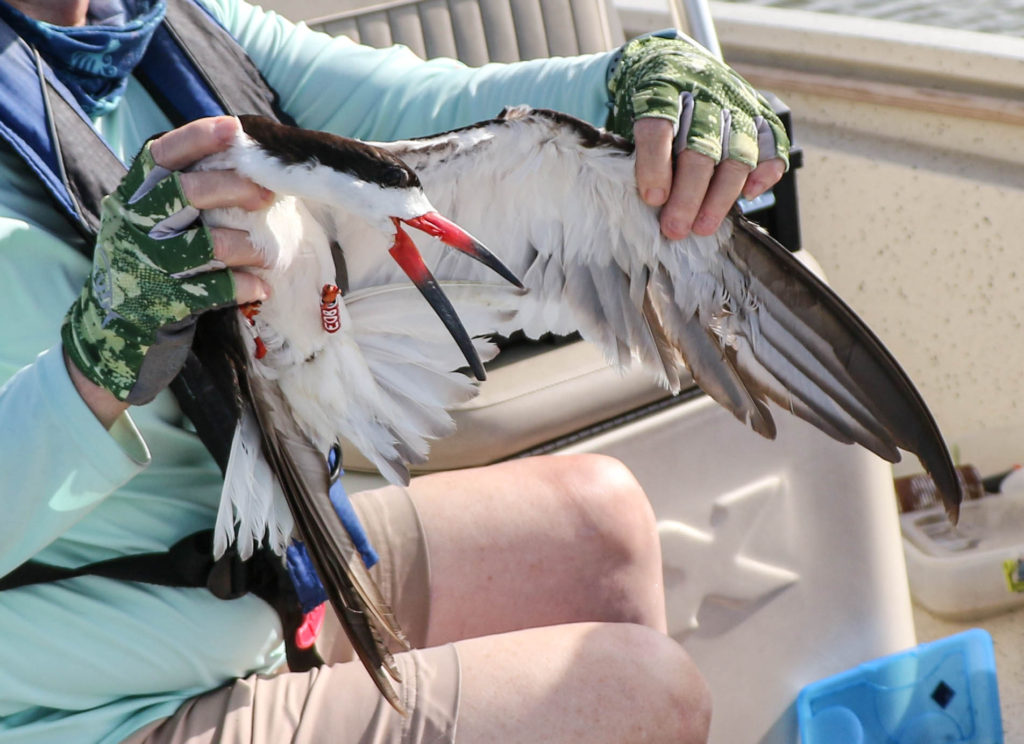 The transmitters will allow us to determine where the birds go to forage and how big an area they cover. If we get lucky and they last long enough, they will tell us where these birds go during the non-breeding season too. So interesting! Here I am with the famous David Newstead! 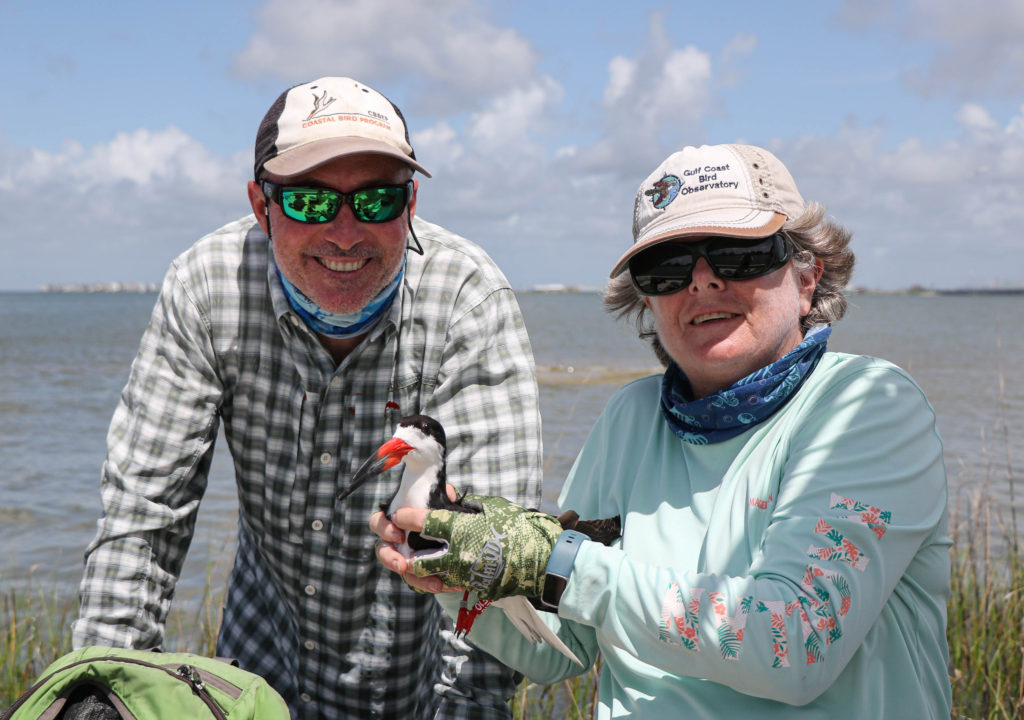 When we were done with the skimmers, we dropped David off at the boat ramp and Alan and I went to check Swan Lake. 20 & unbanded were still incubating their nest so we left them to it and moved on LR & unbanded. They hadn’t been there last week but this week they were both there and acting suspicious. I went and looked around and found a new two egg nest! This is their third try. I hope they make it!

In Swan Lake proper, both of 11 & unbanded’s chicks were out of hiding and walking along the shoreline. They looked really big. I had planned to wait until next week to band them but they looked so big and they were out in the open making them easy to catch. I couldn’t resist going ahead and doing it. 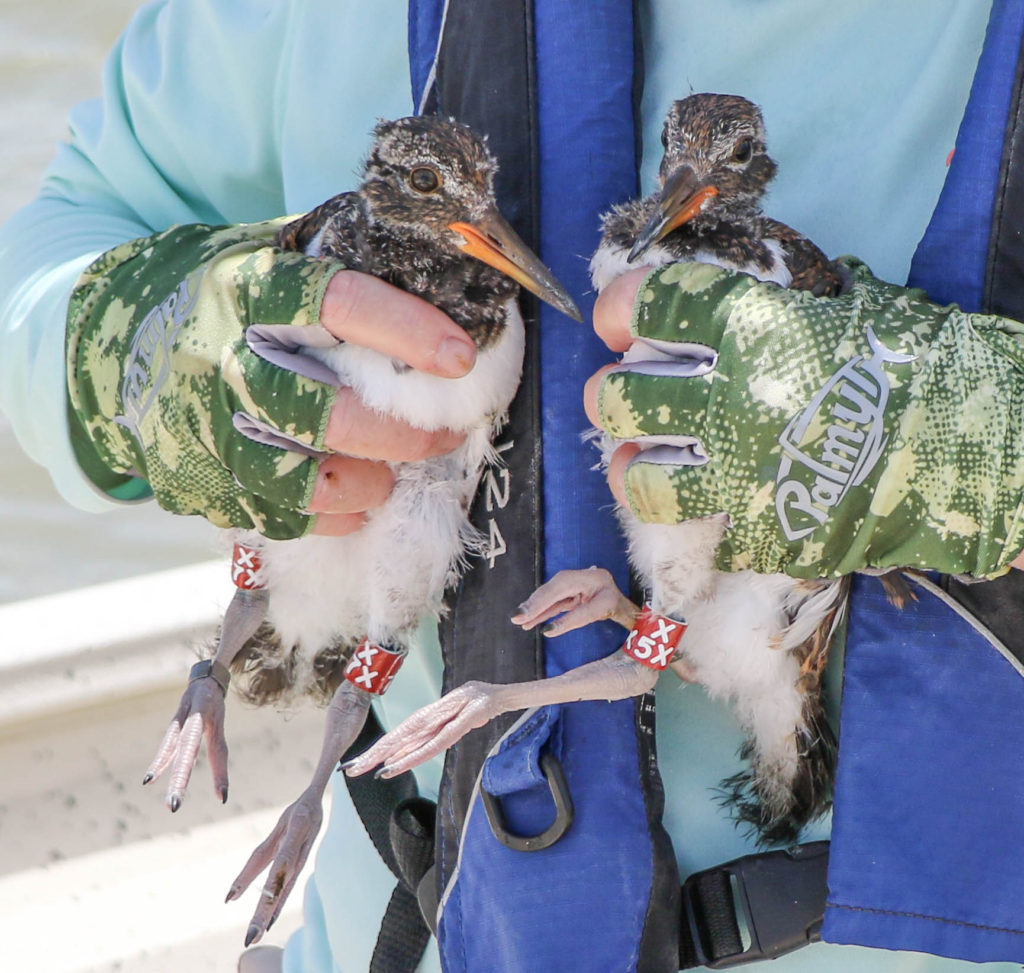 Of course once I got them in my hands, I could see they were smaller than they had appeared in binoculars but still plenty big enough to band so we went ahead. Good job 11 & unbanded!

I think we surprised X3 & unbanded because they were in the back vegetation with their chick when we arrived. They quickly flew out to the little island where they try to fool us every time but we saw the chick try to hide in the vegetation and take a short hopping flight. Almost fledged!

We looked for 39 & unbanded on the breakwaters but they weren’t home so we headed back to the boat ramp.