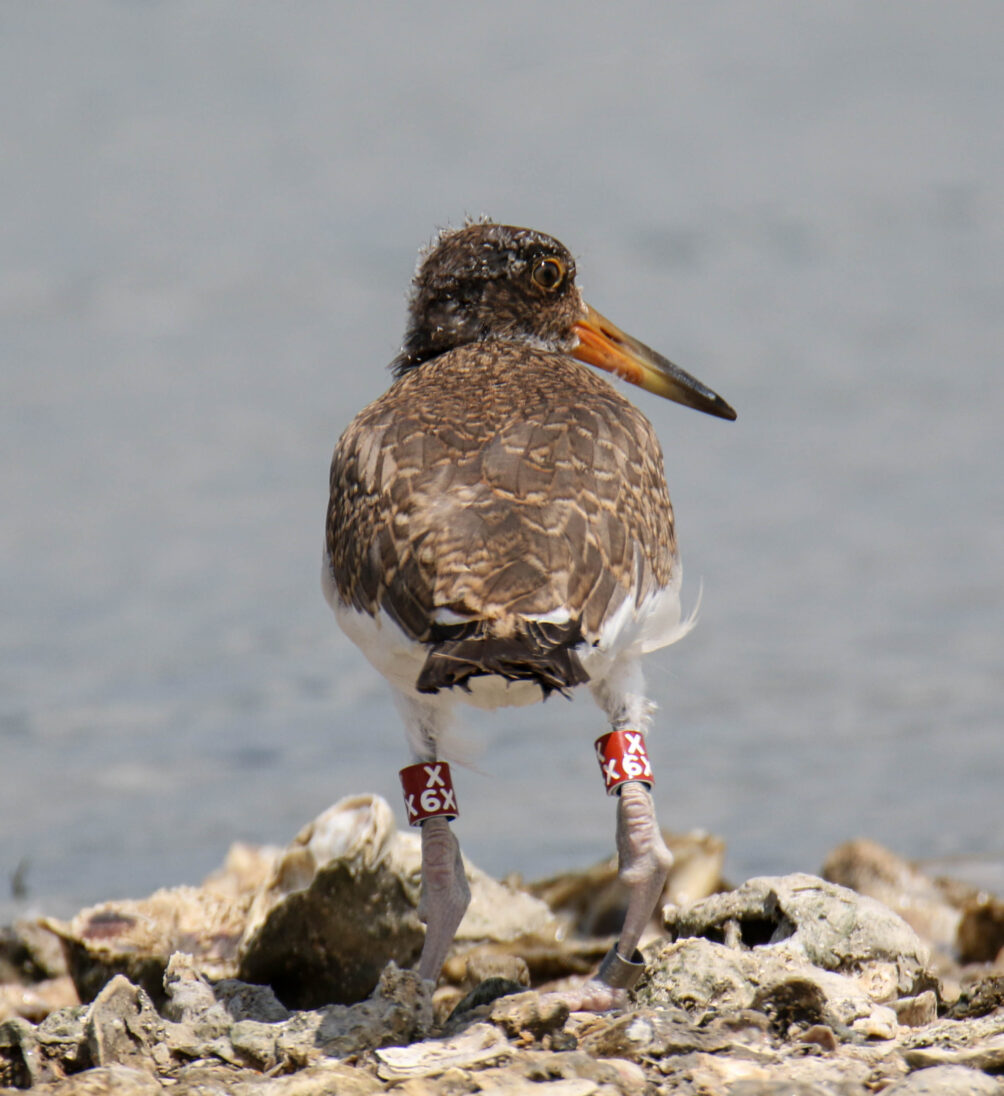 It was another hot day on the bay Wednesday. There was only a little wind which made for calm water but hot temperatures! Alan and I headed out with Elizabeth and Elisha Hehir on Wednesday because the weather report for Thursday was calling for rain. It is now Thursday and I can report that the aforementioned rain is nowhere in sight!

We went to Struve Luci first to get the skimmer work done before it got any hotter. We counted adults, chicks and nests, changed the camera cards in the game cameras, did an hour of observation watching for aggressive behaviors and collected the data off two of the transmitters on adults. Phew. It was 11:00 by the time we were done with all that and I was ready to get on with checking oystercatchers! But first, here’s a skimmer chick we banded this year. 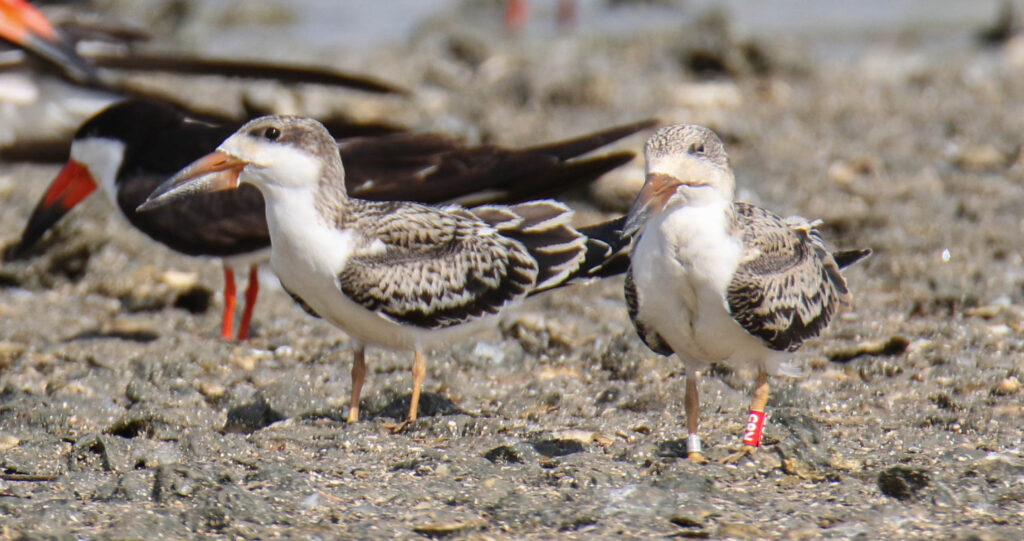 And one we banded as a chick last year. It’s all grown up! 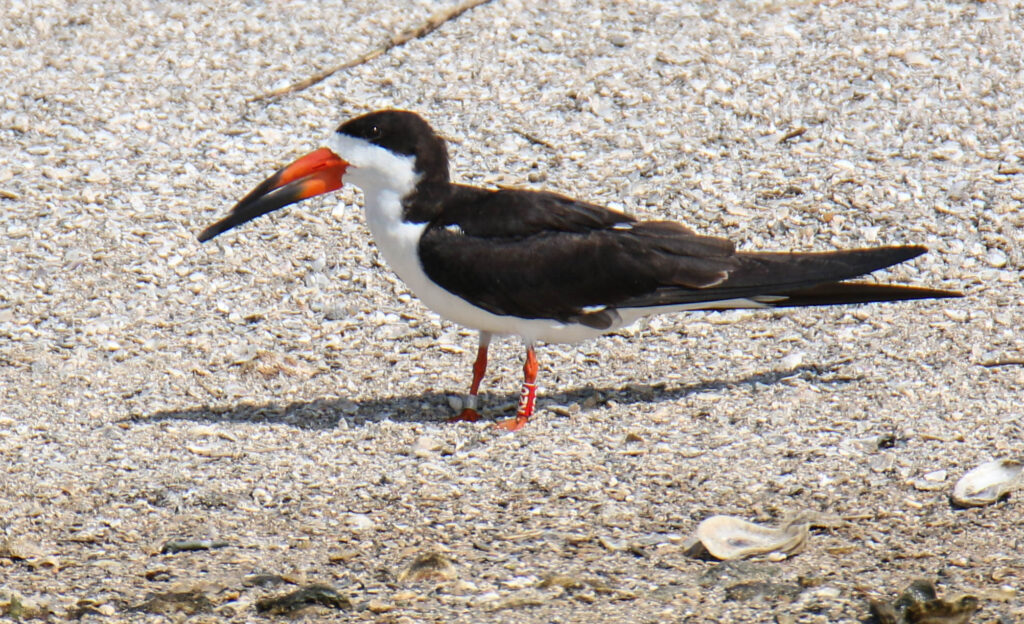 We headed up towards Swan Lake and I don’t know about everyone else on the boat but I really appreciated the air conditioning provided by a moving boat! The railroad bridge was down and we passed under it with a moving train above us. Always exciting to have a train rumbling past about three feet above your head!

We went to check on 20 & unbanded and their chick. I figured their chick would be fledged by now and indeed when we got to their island they weren’t there. Hum. I can’t mark a chick as fledged unless I actually see it after it can fly because of course, something could have happened to it instead of it fledging.

We decided to check the breakwaters and see if they were there but we ended up not having to go far because Elisha and Elizabeth spotted an adult with the chick on their secondary island. Because the chick could have walked there, I had to entice it to fly to make sure it could and it finally took off and sailed back over to the nesting island. Yay! Another chick fledged. 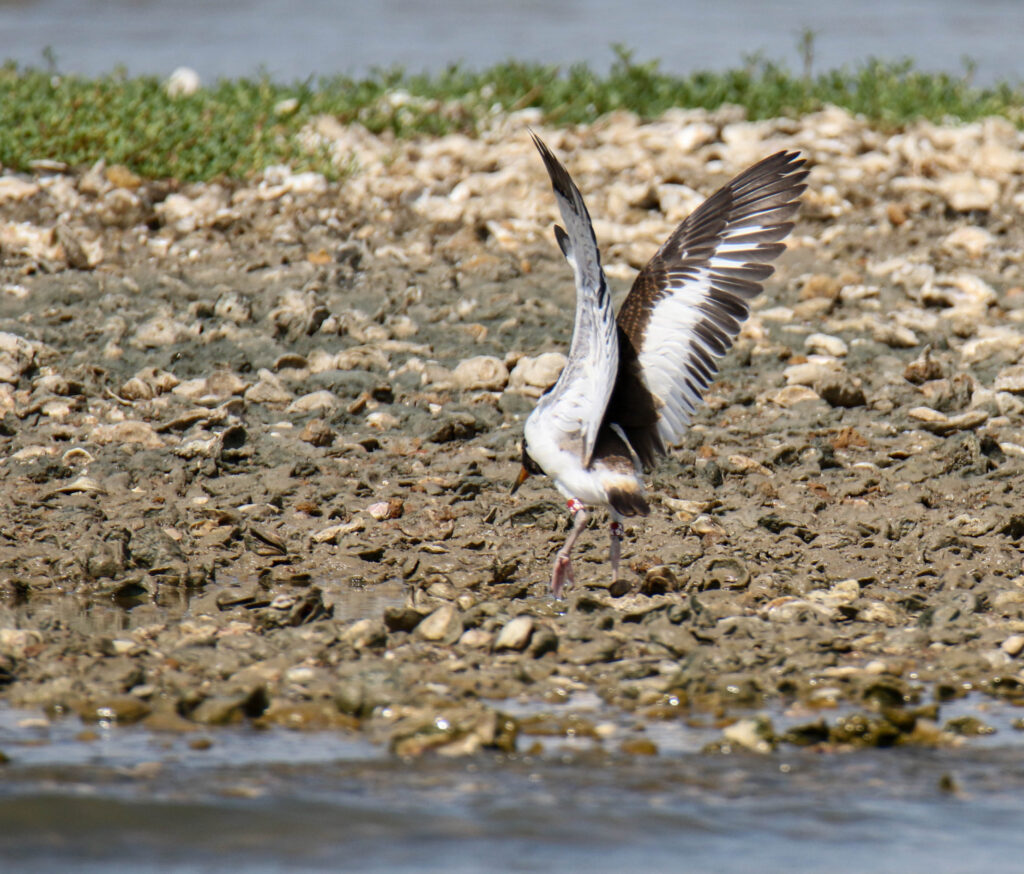 We checked on LR & unbanded but they weren’t home. Next up was 11 & unbanded. Last time we checked on them (June 23), I had finally forced myself to accept that something had happened to their chicks but still I was hoping for a miracle and I’m pretty sure Alan was too. When we approached their area, two oystercatchers buzzed us and one was a young bird. Could it be?! 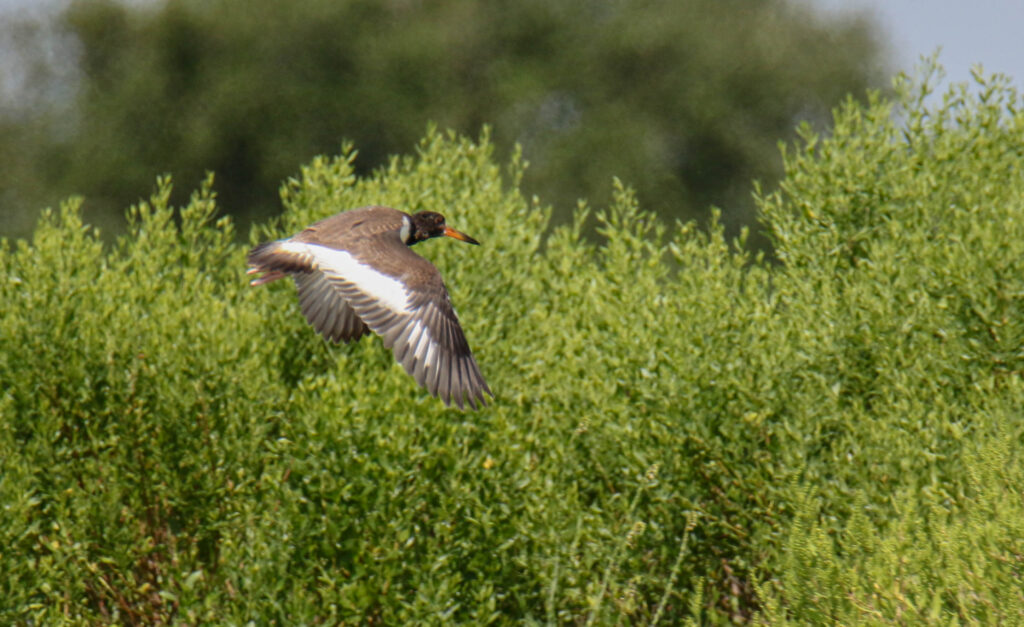 They were joined by a third bird in the air and all three landed on the shoreline. When we approached I could see that it was 11 & unbanded with one chick! Woohoo! X5X made it. That was VERY exciting. 11 hasn’t fledged a chick since 2013. So long ago that he had a different mate than he does now. The island he used to nest on has eroded away to reef and now he can only nest along a mainland shoreline that is rife with coyotes. His mate now is unbanded, so we don’t know if it’s the same female from year to year but it was so good to see they were successful this year.

After that bit of excitement, we moved on and found K7 & unbanded with one of their chicks. 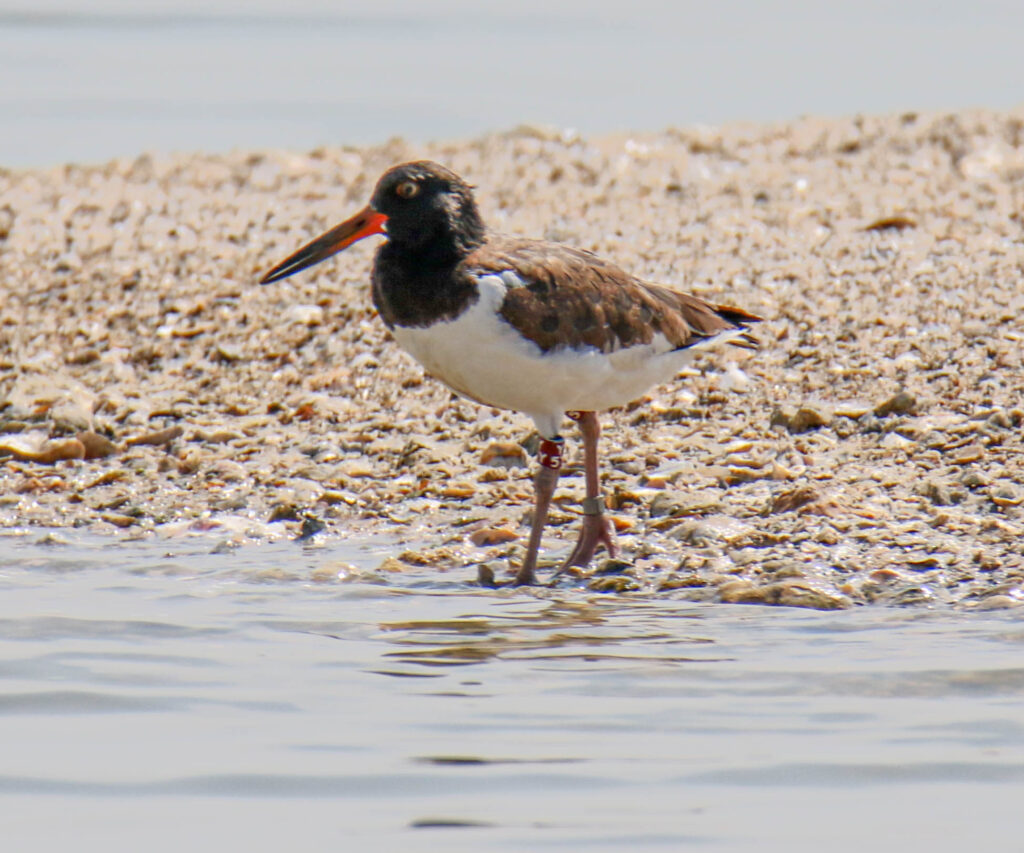 X3 & unbanded flew in from the marsh with their chick. 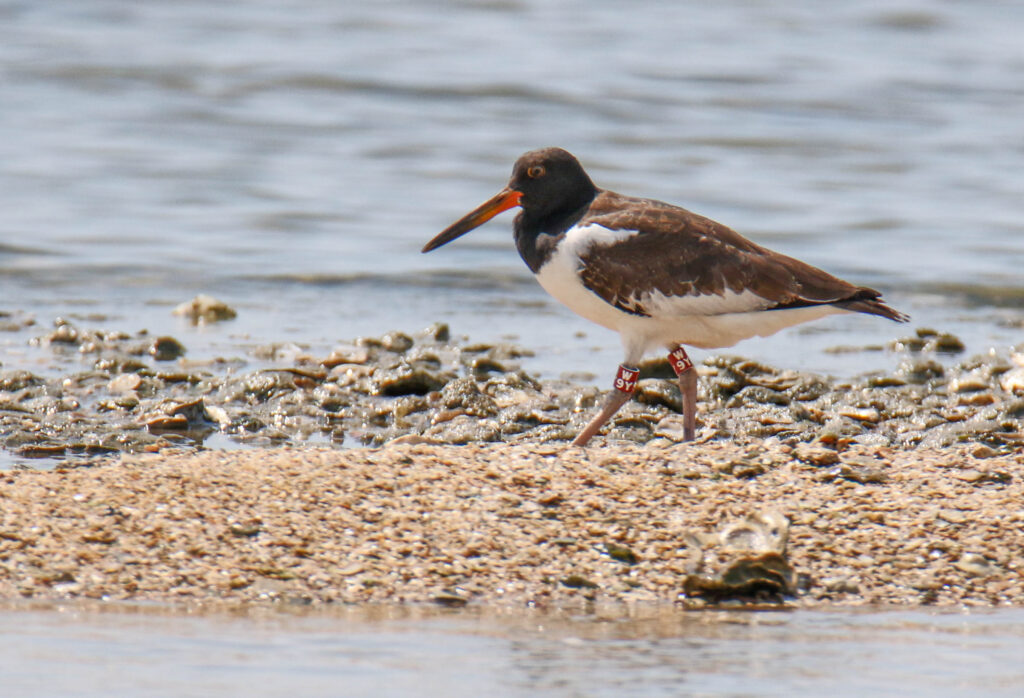 39 & unbanded were on the breakwater so we headed back to West Galveston Bay.

We went to Jigsaw to untangle what was happening with LH & JX. A few weeks ago they had a small chick but last week when we banded their neighbor’s chick (YE & unbanded), there was no sign of their chick. This week we saw one of them on a reef and when we got near, we saw both of them were there. No sign of a chick so I think something must have happened to it.

YE & unbanded were both out on a reef and their chick was with them. It didn’t appear to be able to fly yet because it ran to hide when we approached. Another week and it will be sailing around the bay. It’s got some oddities to the legs but seems to be able to walk fine. 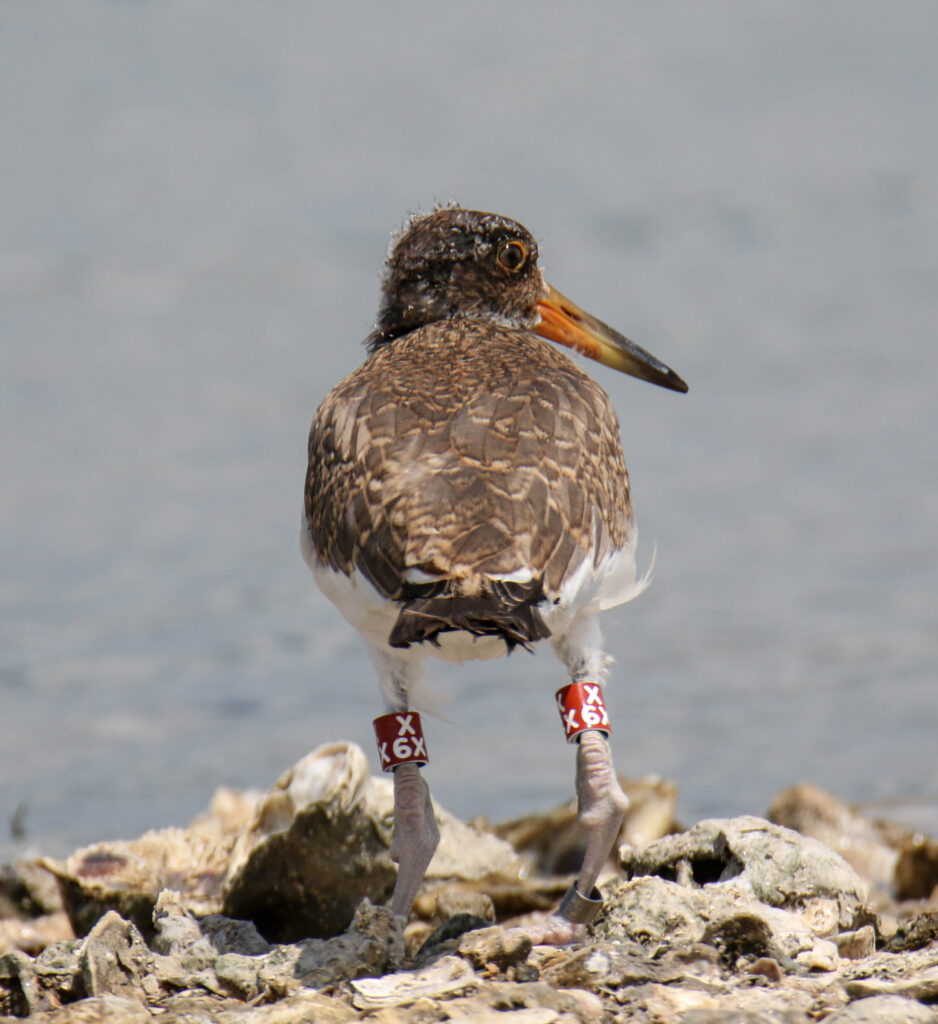 The other pair that tried to nest on that island appears to have abandoned the area because we haven’t seen them in several weeks. They need to learn not to lay their nests in a gull colony!

We checked along the Galveston shoreline and found the usual cast of characters. YK had an unusual friend. 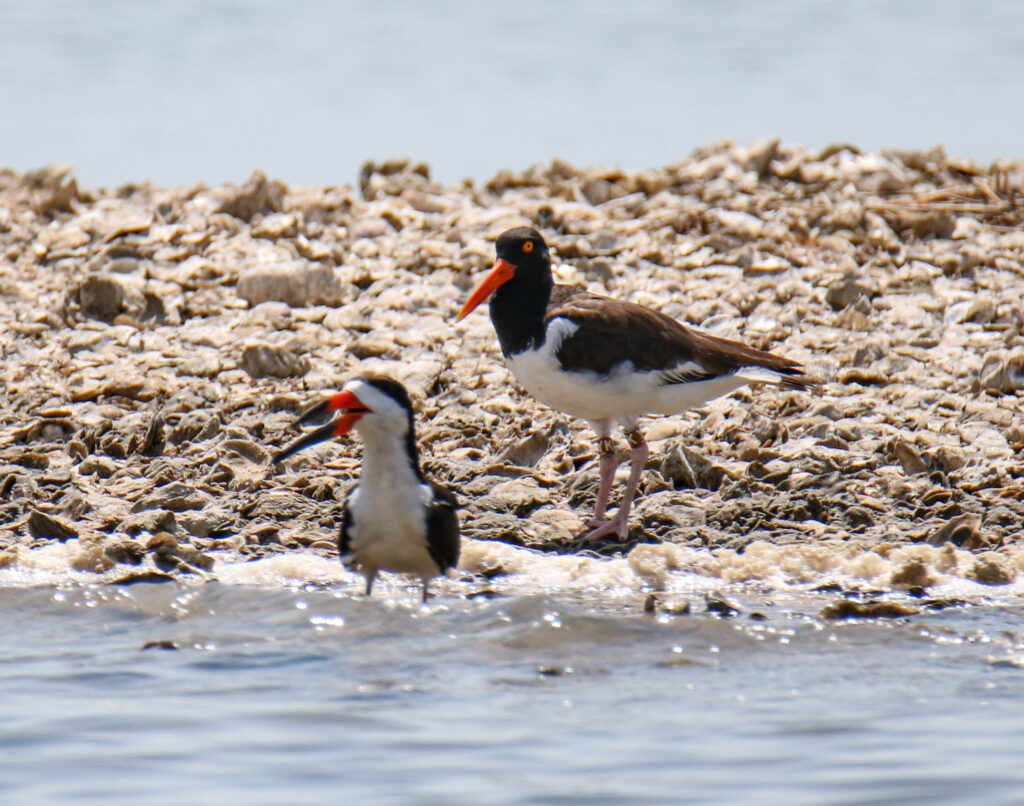 They took off together when we approached and YK joined his mate. The skimmer tried to join them too but that didn’t work out well and it flew off on its own. There were five or six birds at the end of 8 Mile Road but none on the docks. C8A & unbanded and A1A & unbanded hanging out on the Gangs Bayou breakwater and A1A & unbanded still had their chick with them. 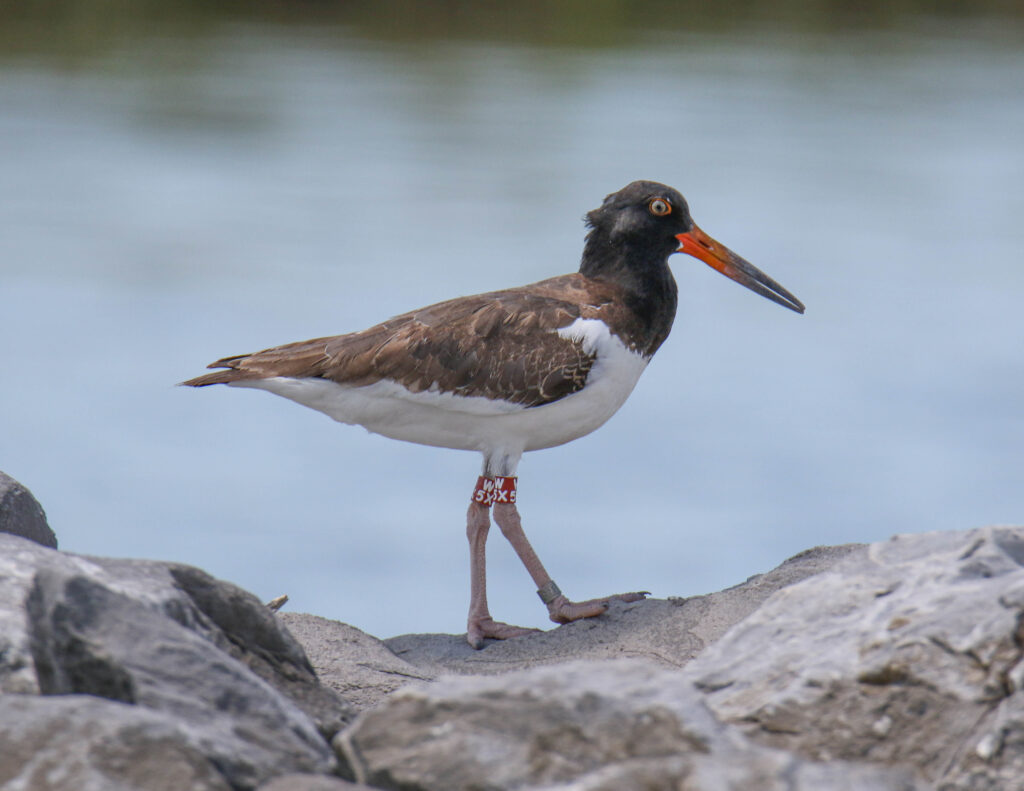 A4A & unbanded were on the island also still with their chick. Those chicks have been fledged for a while and I expect they will be out on their own soon. 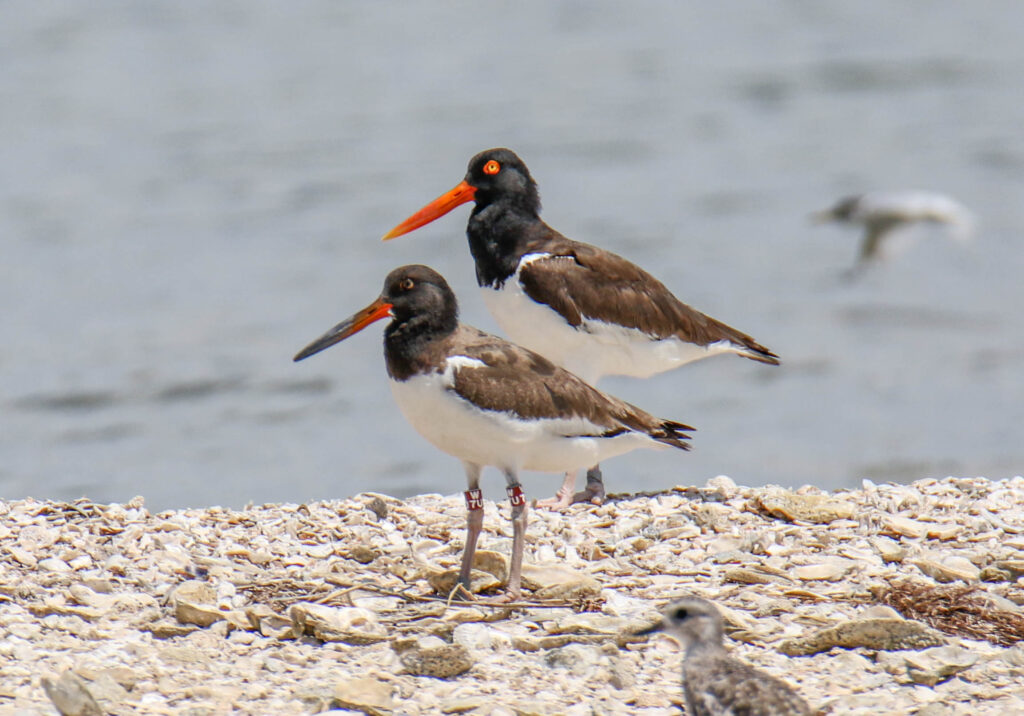 We headed over to South Deer to check on A5A & unbanded. I was afraid I had missed the opportunity to band their chick last week but it didn’t seem like it could fly yet this week. We didn’t see where it ran to hide though so we motored away to check out the Royal Tern chicks and returned about 10 minutes later. The chick had come back out in the open and this time we saw where it went so I was able to easily find it. In making my way back to the boat, I got stuck in some mud and fell down on my knees with water reaching my waist. I managed to keep the oystercatcher chick I was holding above water though which saved my fitbit also because it was on that wrist. Nice! Alan said I popped back up too quickly for a photo but not too quickly for my entire lower half to be soaked. The hazards of banding oystercatcher chicks. This little one will be fledged soon but I’m glad we got it time! Last week it had been dragging a wing but there no sign of an injury this week. Meet X5Y. 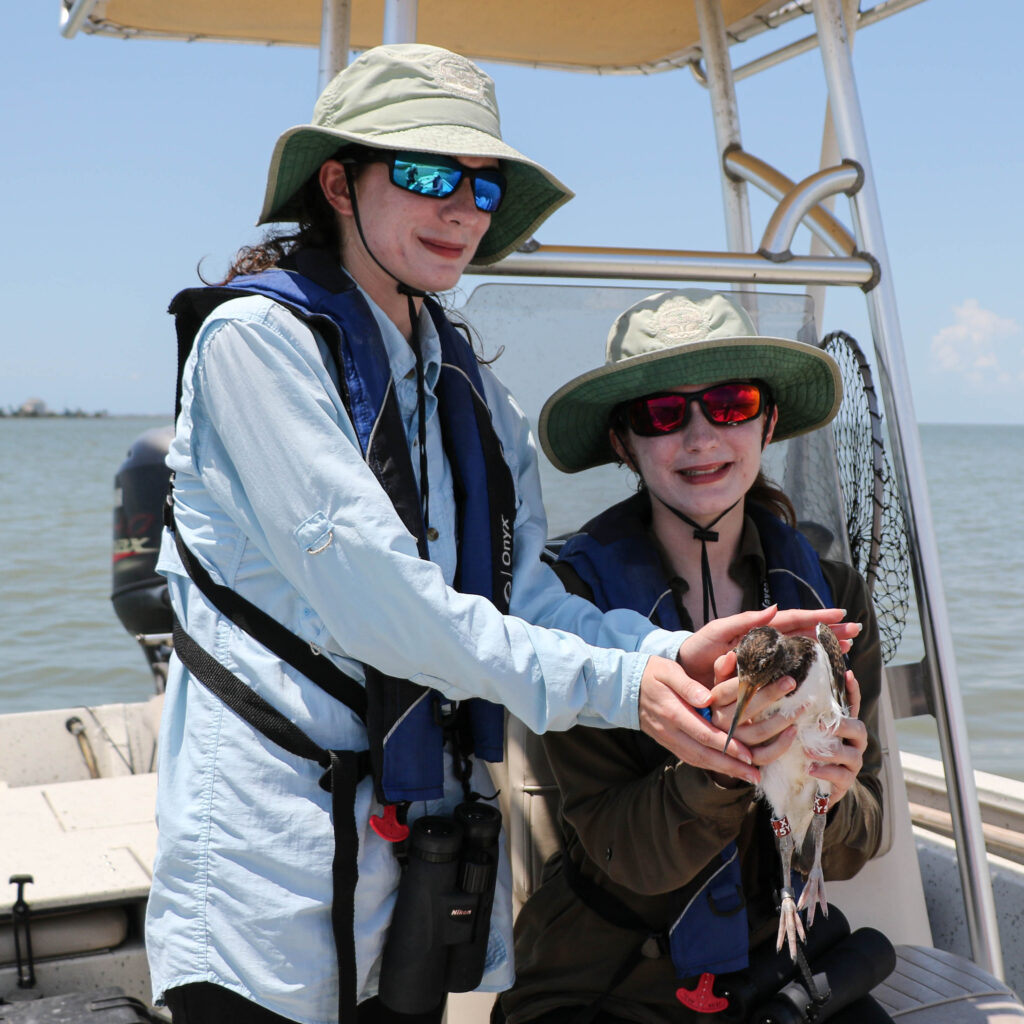 We continued around South Deer. Y7 & unbanded weren’t home. F1A & E2A were still acting as though they have a chick but I couldn’t find one. I guess we’ll have to wait until it gets bigger to get a look at it.

We headed over to South Deer and found C1A & unbanded and their chick were wisely hanging out on a reef because their entire territory was literally covered with young pelicans and gulls. Ugh. We have enough of those thank you!

The rest of the pairs were just hanging out. FR & unbanded still have their chick which is kind of odd because that chick is REALLY old! I guess they are just a close knit family! 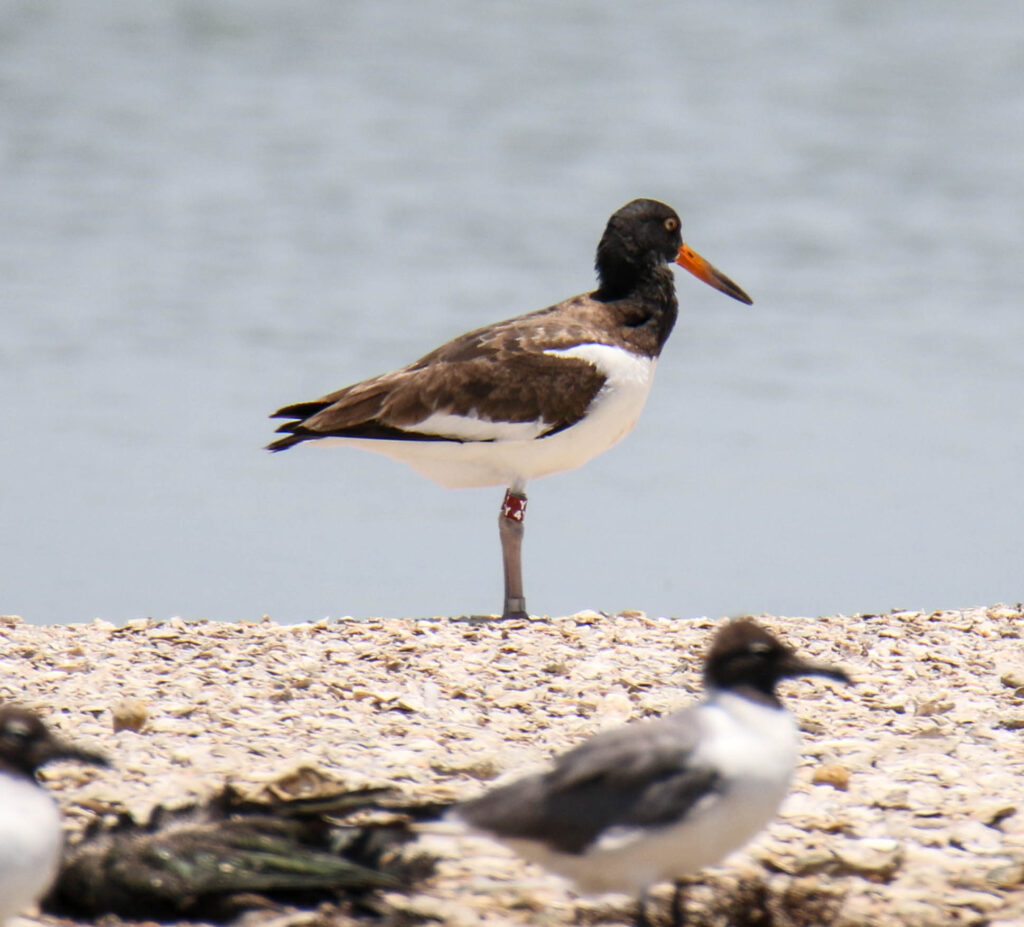 CA & Y2’s chick was still around too but it wasn’t having anything to do with us and flew off when we approached. We couldn’t find W5 & JC anywhere which dashed my hopes that maybe they were hiding a chick somewhere. Oh well. This has been a great season!